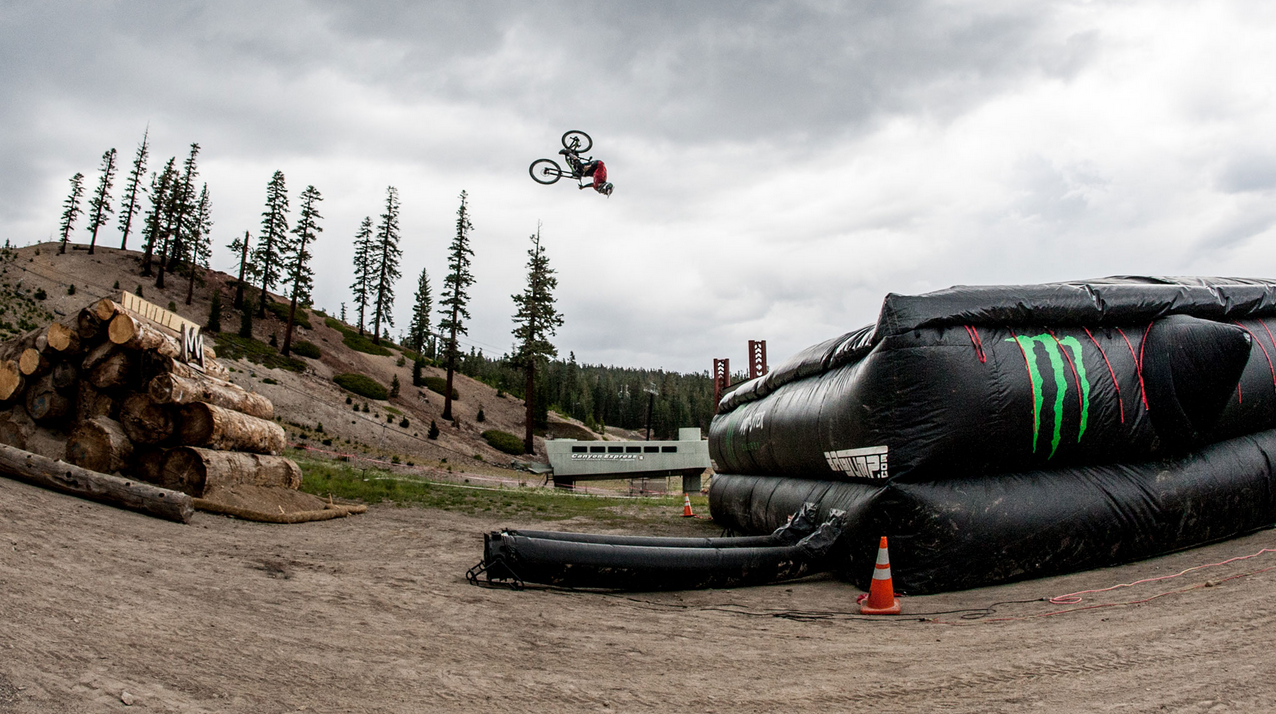 When it comes to going huge on a mountain bike there’s no one quite like Cam Zink, 28, who last year landed a 78-foot step-down backflip during a harrowing run at one of the world’s premier freeride mountain bike events. Now he’ll be stepping it up, launching 100 feet from a 15-foot-high dirt ramp to a 25-foot-high landing and aiming for an official Guinness World Record for the longest dirt-to-dirt mountain bike backflip.

“This event gives us an opportunity to really shine a bright light on our sport,” the Carson City, Nevada, native said after practicing for the attempt, which will be televised live on ESPN Aug. 21 at 9:30 p.m. ET in partnership with Monster Energy and will also air on ABC’s “World Of X Games” show Aug. 24 at 2 p.m. ET.

The jump setup was designed by Zink and will be built by the Mammoth Mountain Bike Park team at Mammoth’s Canyon Lodge in California, where he’s expected to reach speeds of up to 45 mph to soar past his previous, albeit unofficial, record.

“Every day guys are doing things on mountain bikes that just defy what we thought was possible,” he said. “It’s one of the fastest-growing sports in the U.S. and hopefully the world-record attempt will give the sport some exposure and inspire the next generation of riders to dream big.”
Zink, the 2010 Freestyle Mountain Bike World Tour champion, is currently ranked 12th on the 2014 FMB World Tour. He helped bring freestyle mountain biking to X Games last year with its debut at X Games Munich 2013, where he placed sixth, and has been among the riders leading the charge to make the event an X Games mainstay.

“The X Games brand has always been synonymous with amazing athletic accomplishment and Cam’s world-record backflip will be next,” said Tim Reed, ESPN X Games senior director, events & content, in a statement Thursday. “‘World Of X Games,’ ESPN and ABC will provide a tremendous platform to showcase the flip that Cam and Monster have developed with the fantastic backdrop of Mammoth Mountain.”

There are four top-tier Diamond Series events remaining in the 2014 FMB World Tour in August and September, including the Red Bull Joyride at Crankworx Whistler, the Bearclaw Invitational at Canada’s Mount Washington, Red Bull District Ride in Nuremberg, Germany, and Red Bull Rampage in Virgin, Utah.