European downhill racing is again in the spotlight, and August 29, 2015 marks the beginning of the fifth year of the Raiffeisen Club Nordkette Downhill.PRO, and as always downhill, the fastest discipline of mountain biking takes centre stage. Facing off on the Nordkette, 10 World Cup professionals and the underdogs, the Local Heroes, all at the start line, and all vying for the fastest time on the mountain. In 2014, the Colombian Marcelo Gutierrez Villegas, who came to Innsbruck as the newly crowned “King of Crankworx”, stood atop the podium. We’re expecting an exceptional 2015, where all the big names in the sport will again battle the track-experienced locals for victory on the infamous Nordkette singletrack.

Last year, however, the much-lauded defending champion was taken out early due to a technical fault, allowing the strong contingent of Downhill professionals to dominate the Nordkette. At the top of the podium in 2014: the Colombian Marcelo Gutierrez Villegas devoured the 3.5 kilometres with a time of only 6:59.62 min, the only one to break the sought after seven-minute mark in the unforgiving rainy weather and demanding conditions. The Colombian long-distance specialist bumped New Zealand’s Wyn Masters who was followed by Johann Potgieter from South Africa to the lower podium ranks, and then ranked fourth was probably the best “urban downhill” in the world, Filip “Polcster” Polc from Slovakia. The Austrians’ best placing would be Innsbruck’s André Vögele with a very strong showing in a remarkable fifth place. 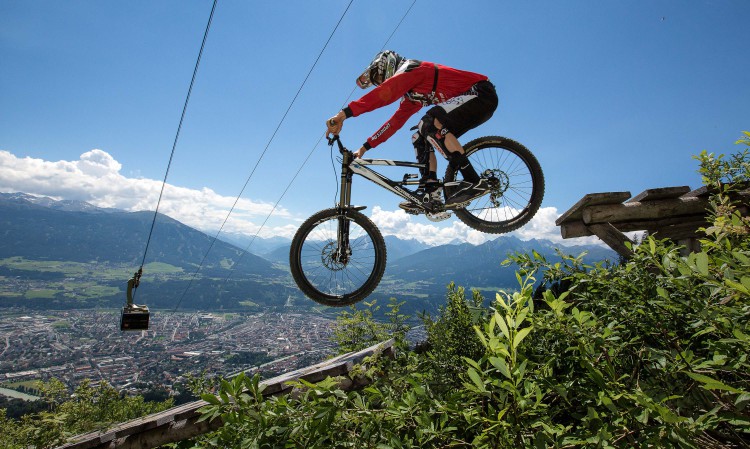 The Nordkette Downhill.PRO has already lured the Downhill World Champion and overall World Cup winner Sam Hill from Australia, the US-American Aaron Gwin, and France’s Emmeline Ragot to the Tyrolean capital. They have all thrown everything down, and challenged the infamous Nordkette Singletrail, which enjoys a reputation as one of the most difficult downhill courses in Europe, and rightly so; at 3.5 kilometres, an altitude of over 1000 meters from start to finish, and up to a 36 degree incline! The elites who have braved the track can recount the differences compared to the Downhill World Cup circuit: The track is steep, challenging and extremely exhausting.

The event held high above the Tyrolean capital, Innsbruck, will mix together professionals and amateurs at the same starting line and offers a unique blend of urban flair and downhill mountain bike racing.

How To Clean Your Bike