We recently made a trip to Bologna in Italy to the presentation of a new electric pedal assisted bike the GP380. TERZAROSSA’s GP380 is a new model from a brand dedicate to the production of E-bikes that can be used for competition.  The idea behind the brand name is focusing on the transport heritage from the Bologna area, i.e. Ferrari, Ducati, now the “Third Red”. 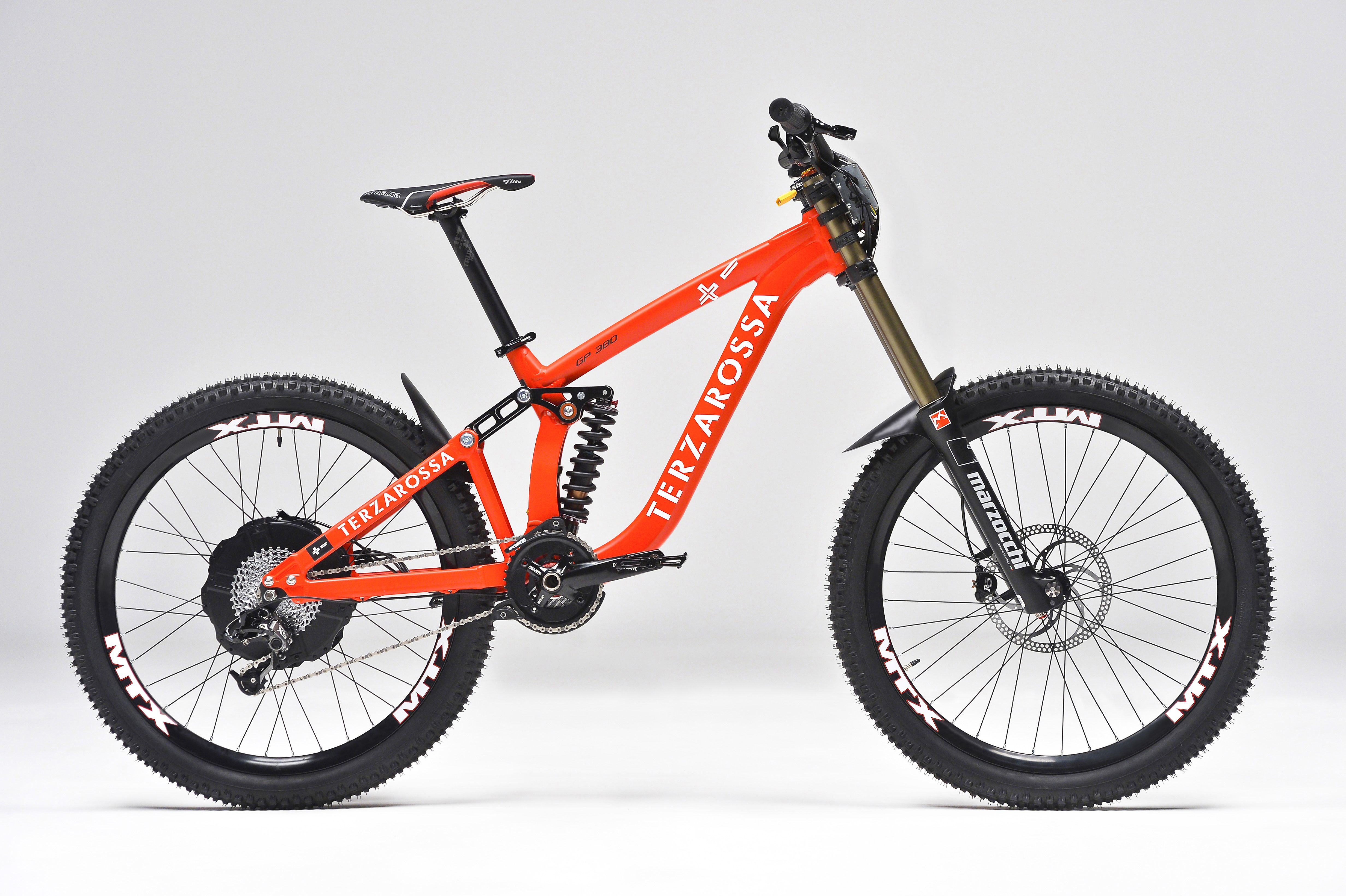 The GP380 has been developed by a team from the Downhill and Motorcross scenes and is pointed at a variety of disciplines, not just gravity. One of the other aims of the GP380 is to be used on a specific track designed for the bike. TERZAROSSA in conjunction with the Italian bike federation Federciclismo, have created and had approved a new experimental race series called “Electric Bike Cross.” Competitions will take place on closed circuits with obstacles and jumps, which can be built in temporary locations as well as permanent locations and are aimed to take racing to the public, including the possibilities of urban environments. The series has been created with categories for electric street legal bikes as well, building on the significant emerging E-bike scene.

Key headline details of the bike are interesting, starting with the weight coming in at just under 25 kilos. This weight includes the motor, which is a specific TERZAROSSA custom product and is activated by an accelerator and pedals together. The battery is worn in a back pack and connects via a cord down the riders arm (only a prototype pack was available which we did not shoot) our test will reveal more. 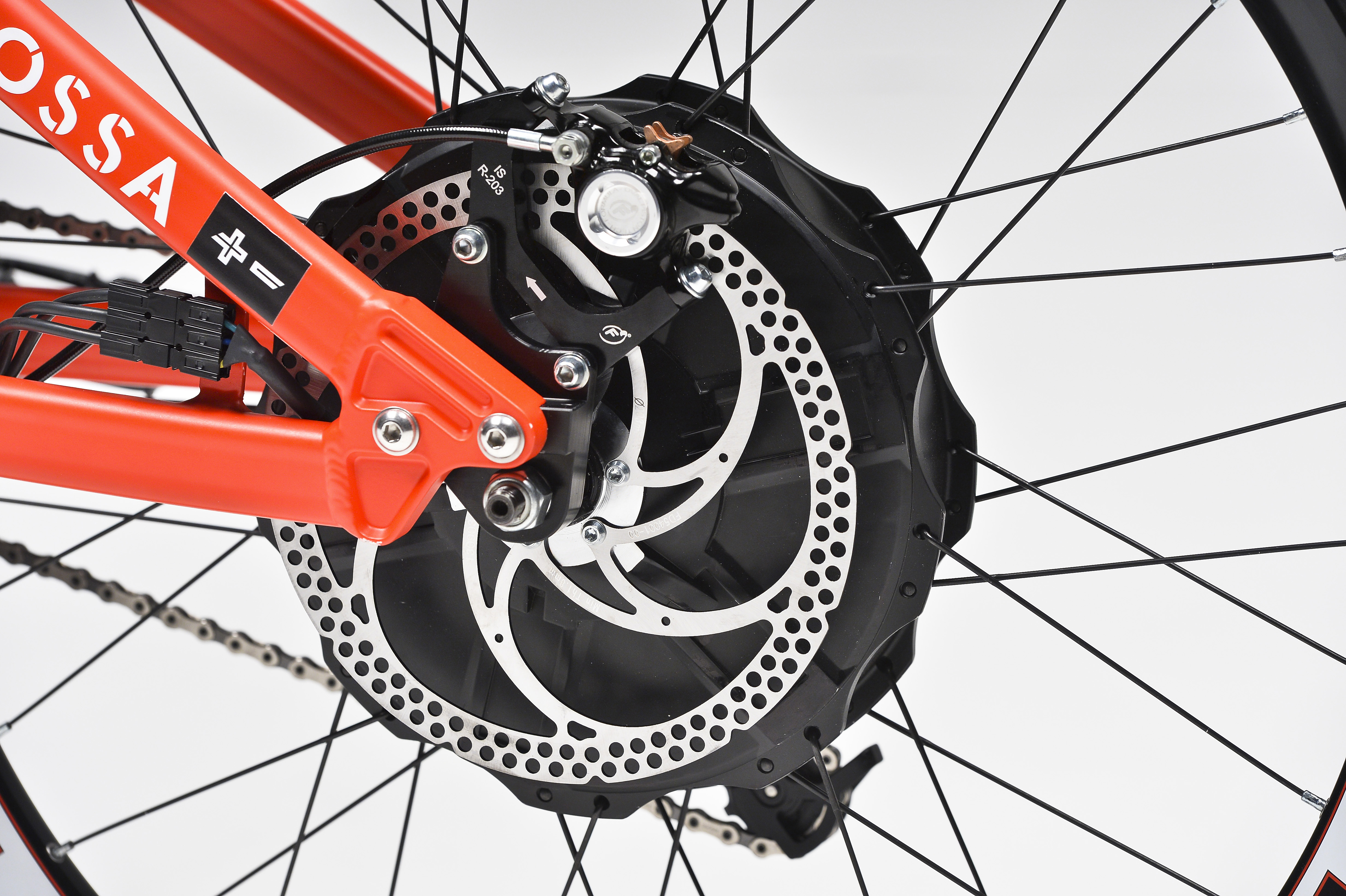 The TERZAROSSA motor is a wheel mounted motor. 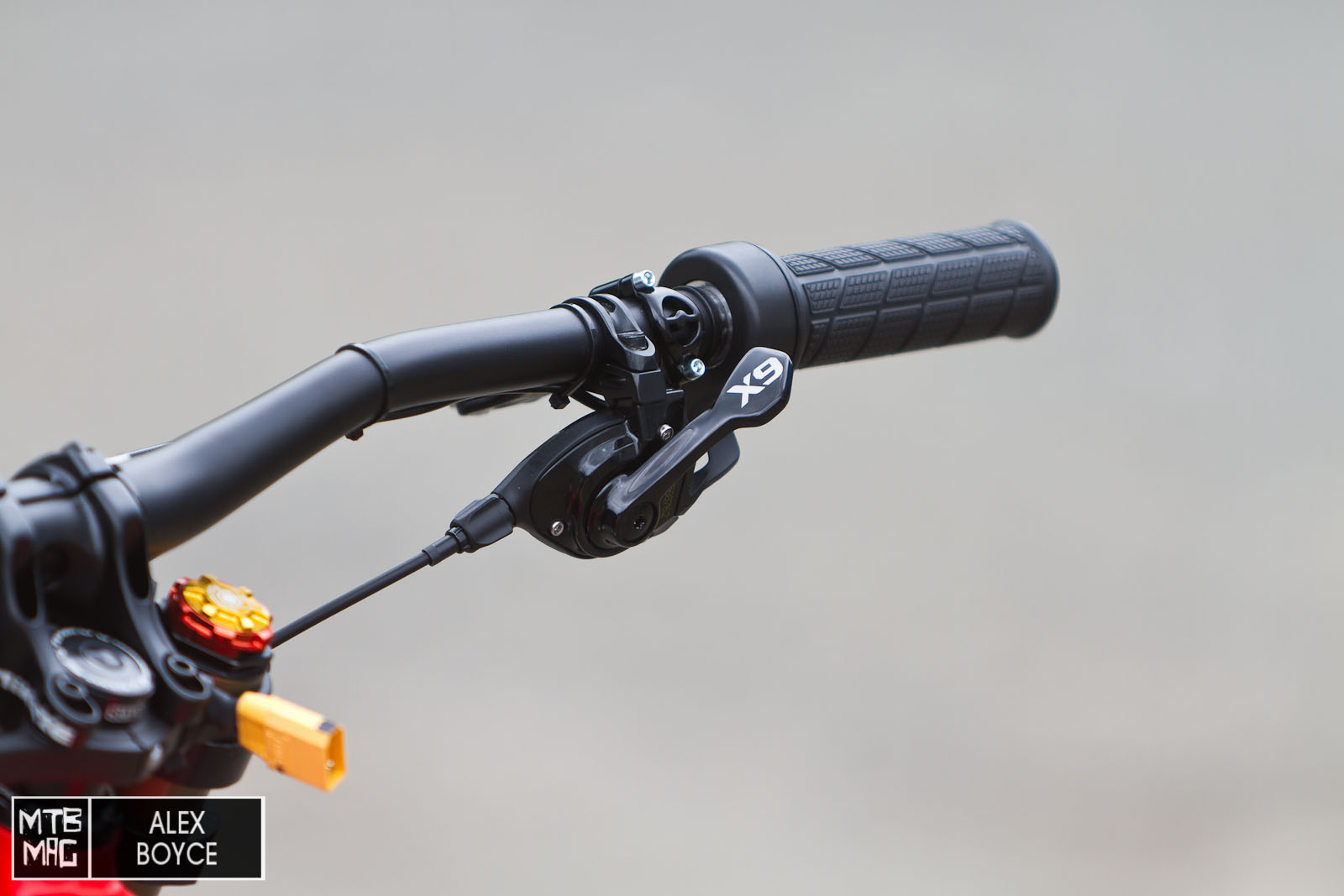 The motor has around 4000 watts of power and allows an acceleration up to 45km/h in around 40 metres when pedaling. Top speed can be up to 80 km/h. The power though can be adapted to the riders preference depending on if the rider utilizes mountain mode, or track/speed mode. Riding up hill with pedal assist at a constant 20km/h is possible. The power source is carried on the riders back in a back pack and therefore removes weight from the frame, which means a more agile bike but also a higher center of mass. There are two batteries available, a standard battery or a racing battery, weighing between 2.5 – 3 kilos depending on the version. The batteries can be recharge in around 30-40 minutes and last around 30 minutes on a specific E-bike cross track or around 800-1000 metres of climbing depending on how much the rider pedals.

The GP380 has a classic head angle of  63 or 63.5 degrees that can be regulated by fixing the rear shock in two different positions. The Seat angle is 72 degrees used with a top tube length between 615mm (medium) up to 650mm (x-large). The bike is available in two frame versions, carbon or aluminium, however the carbon version is currently only available in large with a 635mm top tube.  The cable routing is internal with a power regulator mounted on the front fork between the two crowns. The front 200mm of suspension travel is based around the Marzocchi 380 C2R2 fork with the rear 216mm of travel being controlled by a C2R shock.

The component build is robust with a SRAM X9 rear derailleur and  Hussefelt Descendant threaded bottom bracket crank set with a 38T single ring. Braking is provided by Formula RO 203mm disc brakes front and rear. The MTX  alloy wheels, which can be either 26″, 27.5″ or a combination of the two, with 27.5″ up front in a “Motocross style” combination, are extremely tough and shod with Vee Rubber DH specific tyres. The bars and stem are from Sixpack and unusually the bike comes supplied with flat pedals, which reflects the intended riding style. 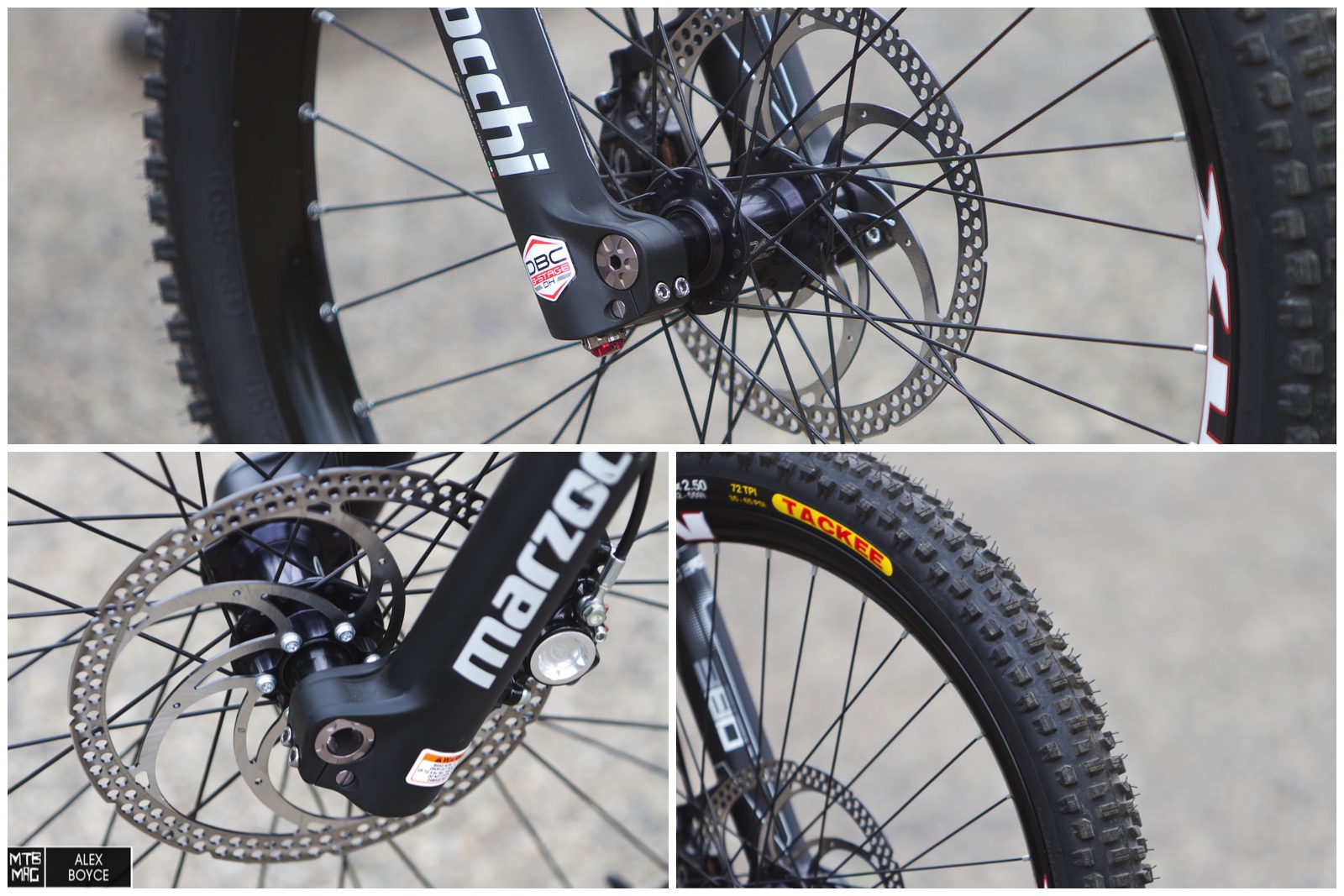 Hope hub up front with 203mm discs, details of the Marzocchi fork and Vee Rubber 2.5″ tyres. 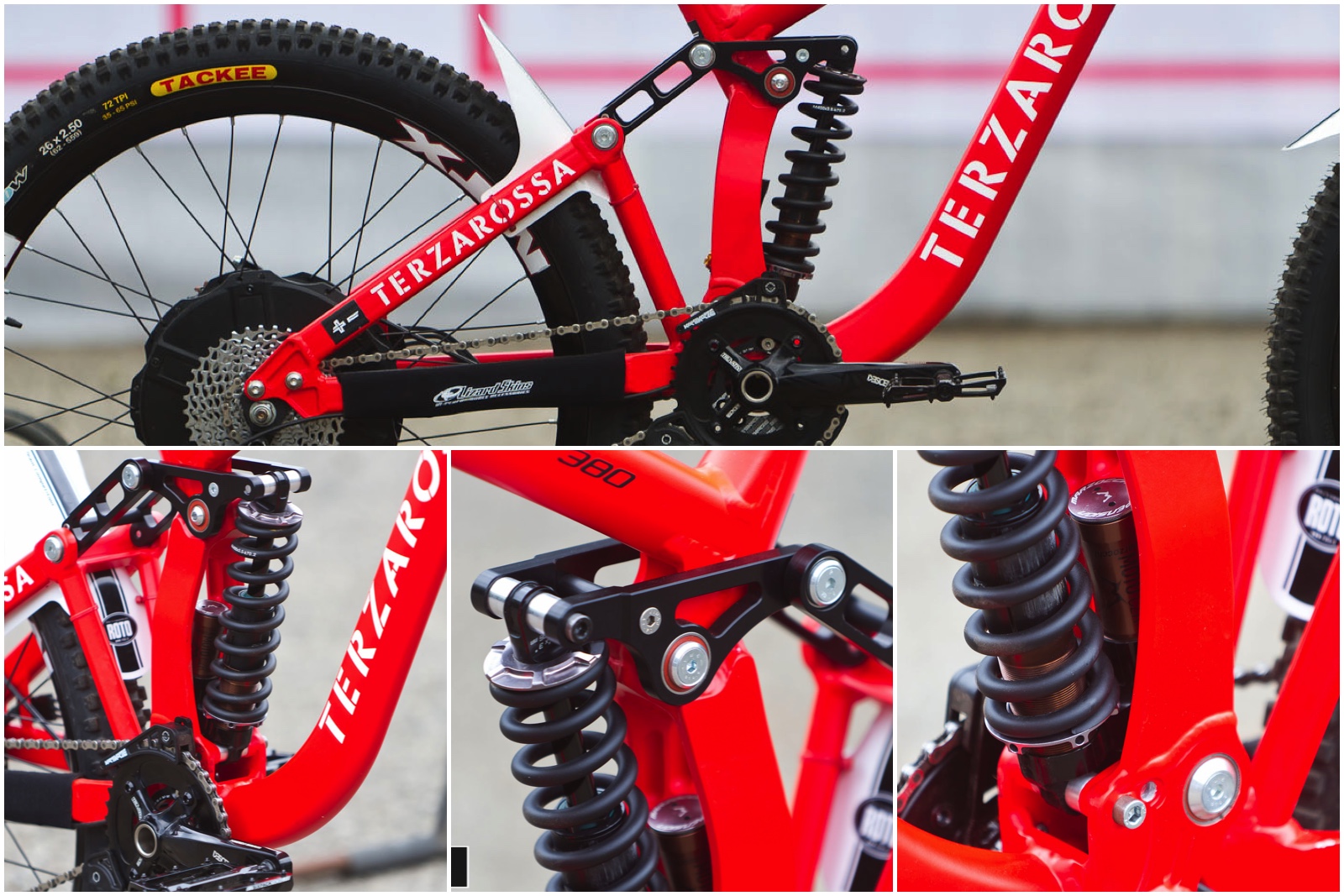 Suspension layout details. The bike has a rocker linkage with sealed bearings that is very smooth and reactive. The shock has two adjustment locations. The rear of the bike employs CR2 Marzocchi shock and 400lb spring plus the SRAM based drive train. 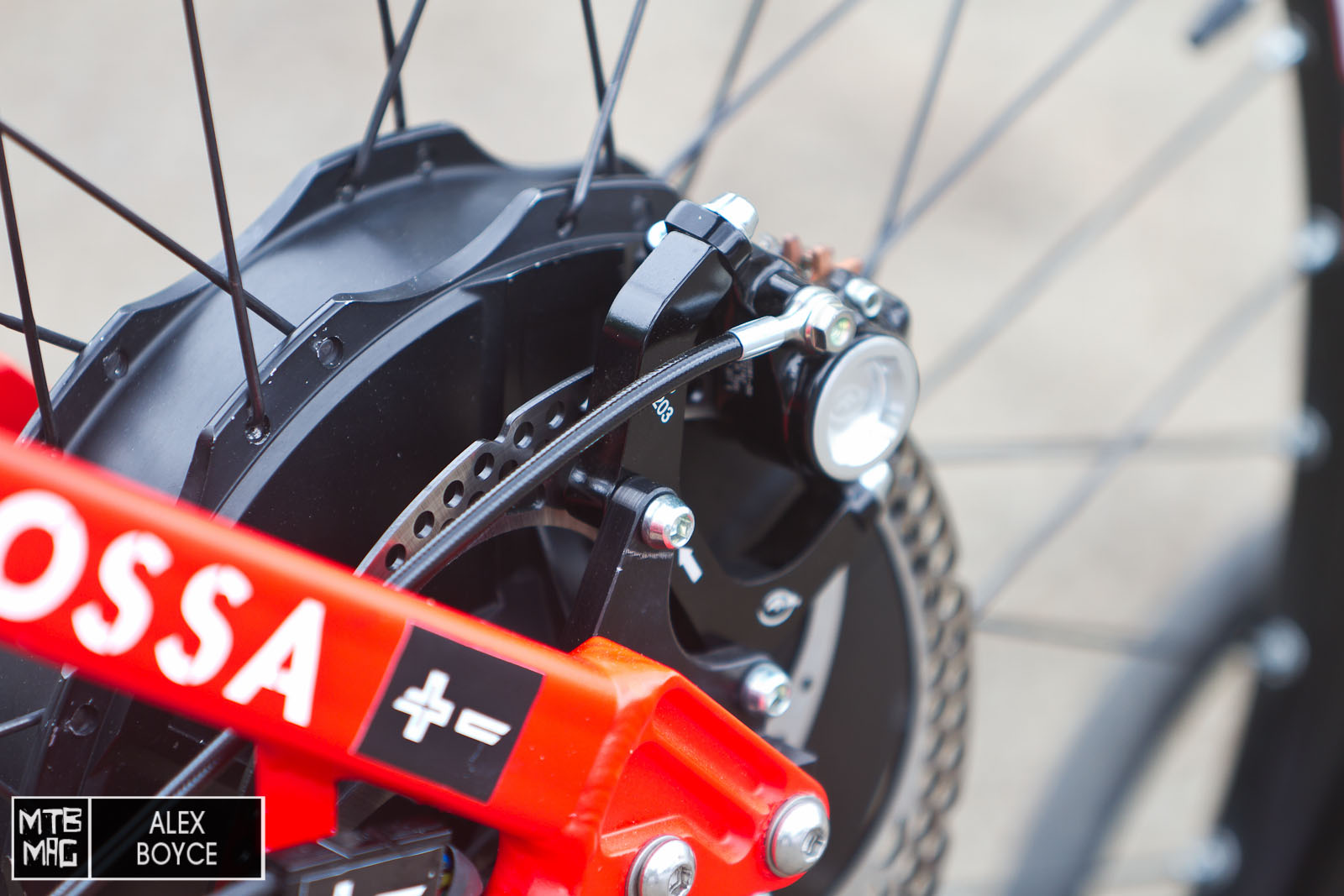 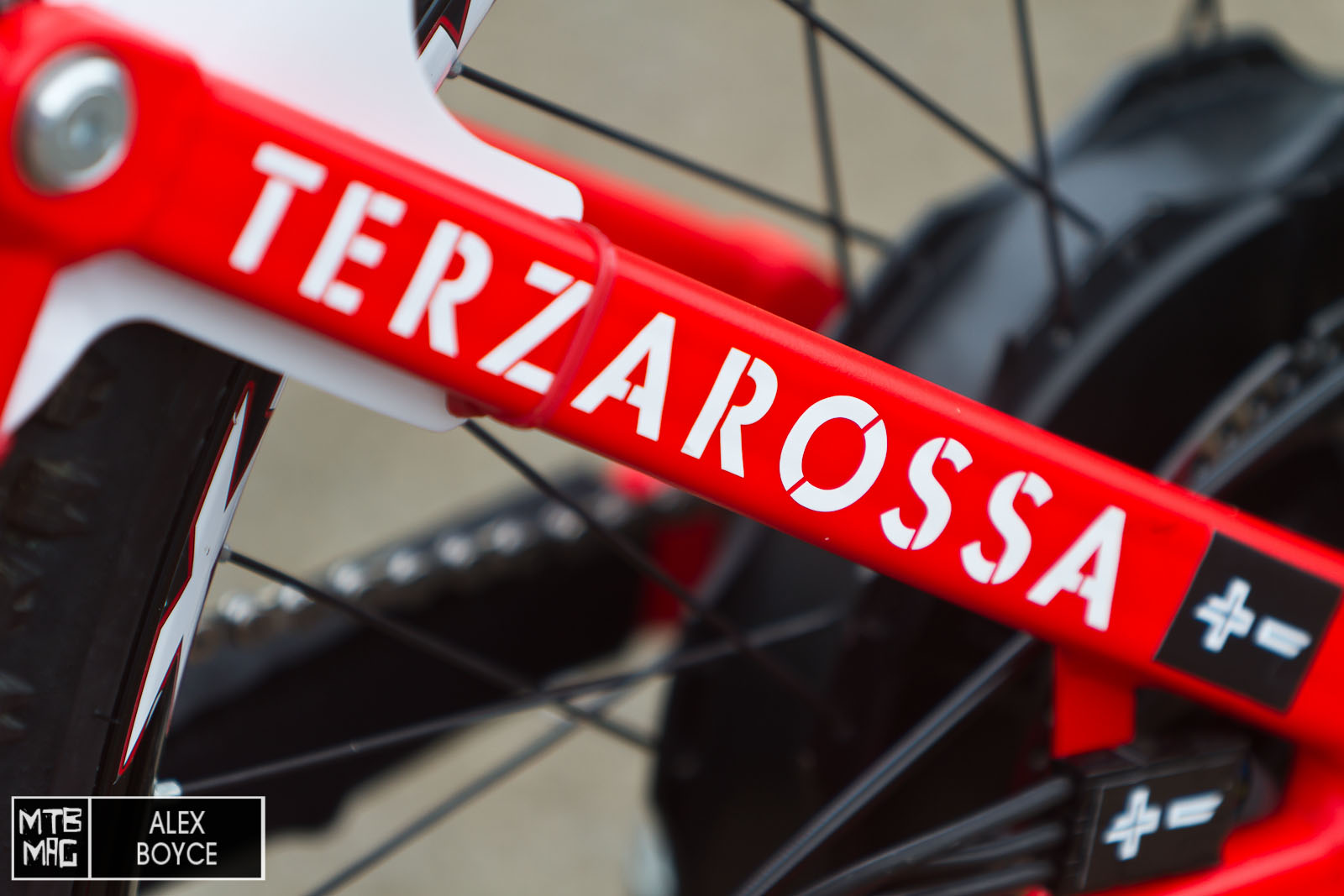 A play on the history of wheel based sport from Bologna is the clear aim of the branding. 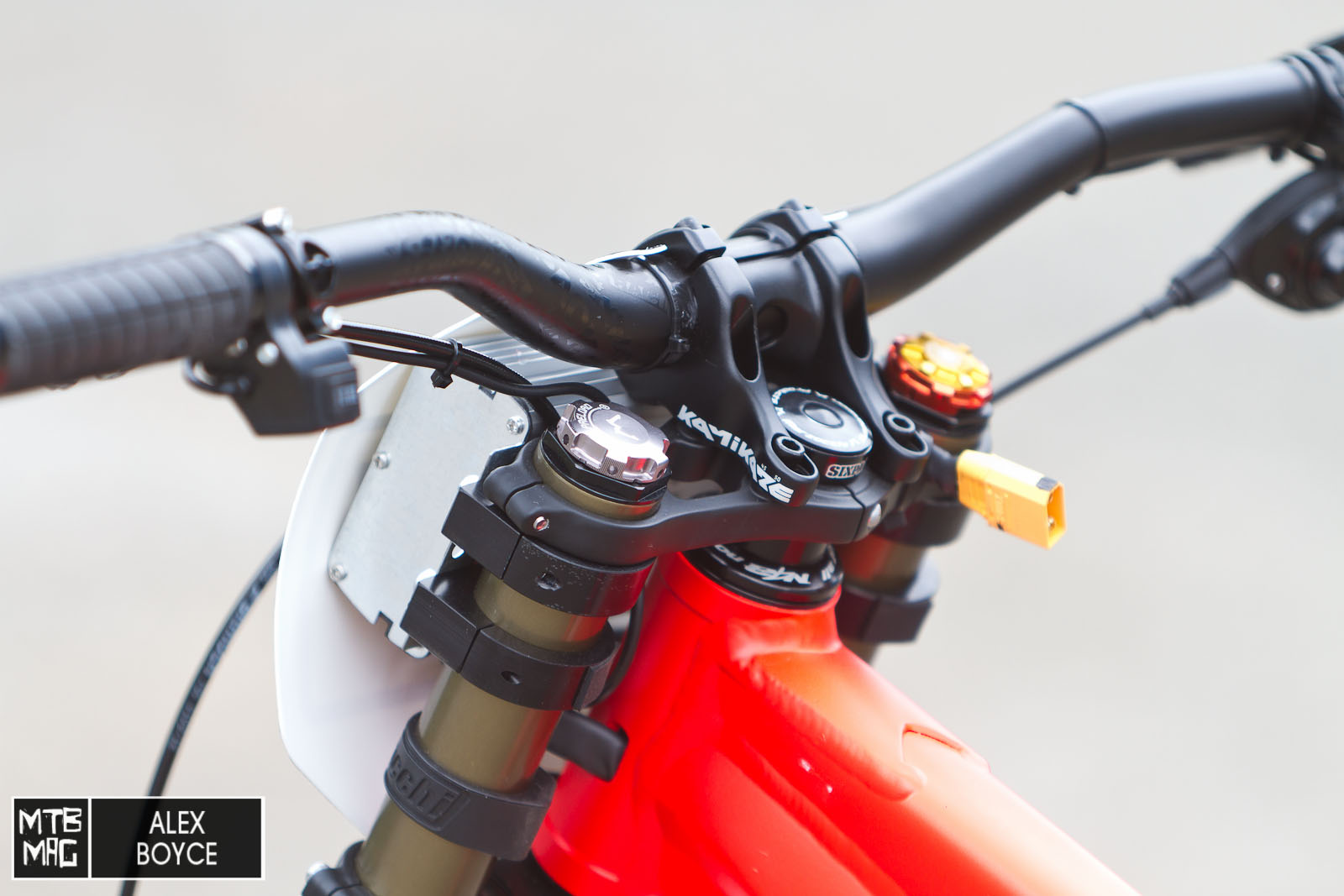 The bar is digital screen free, with only the power inlet visible. 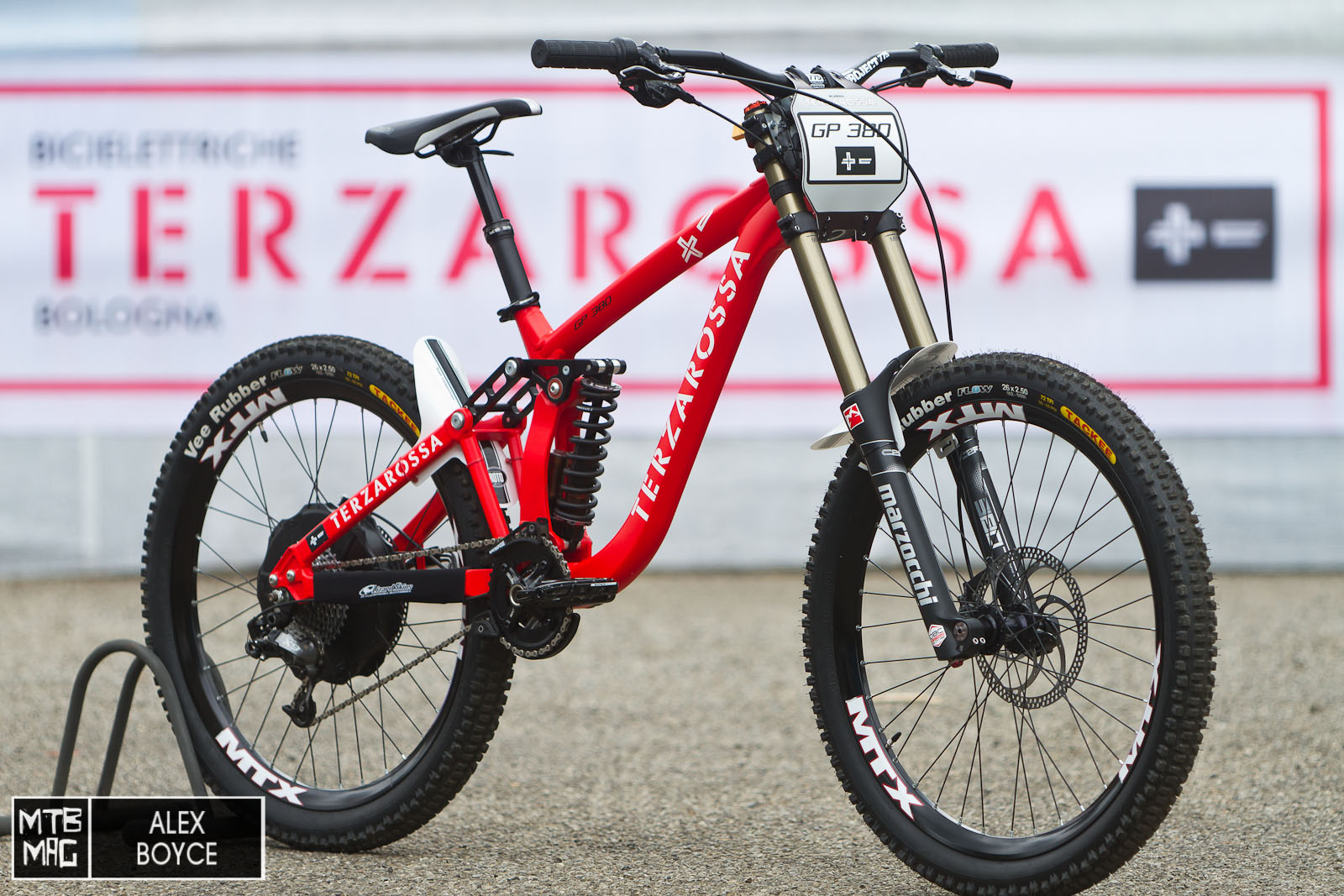 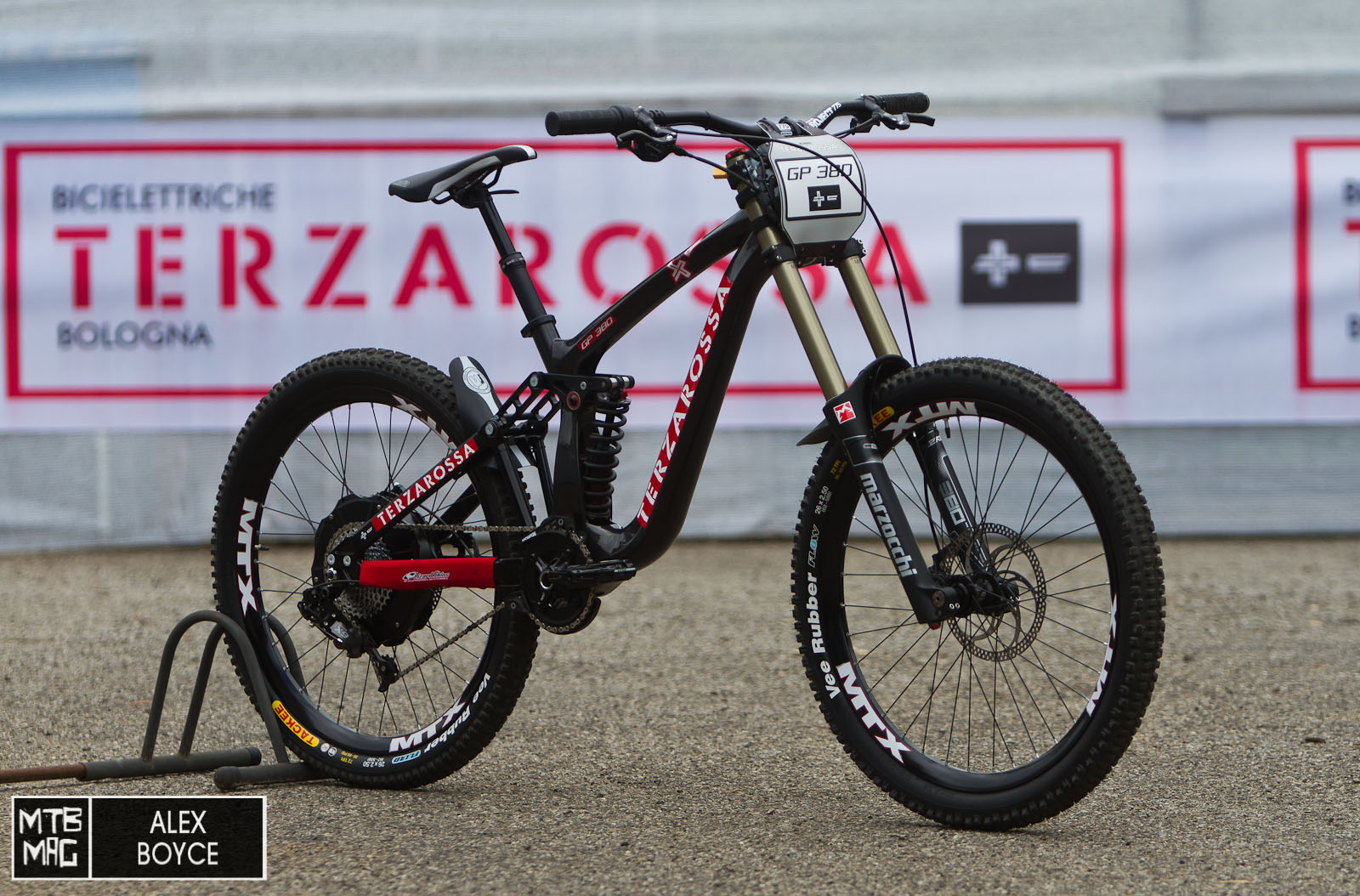 The carbon version of the GP380 vs the aluminium. 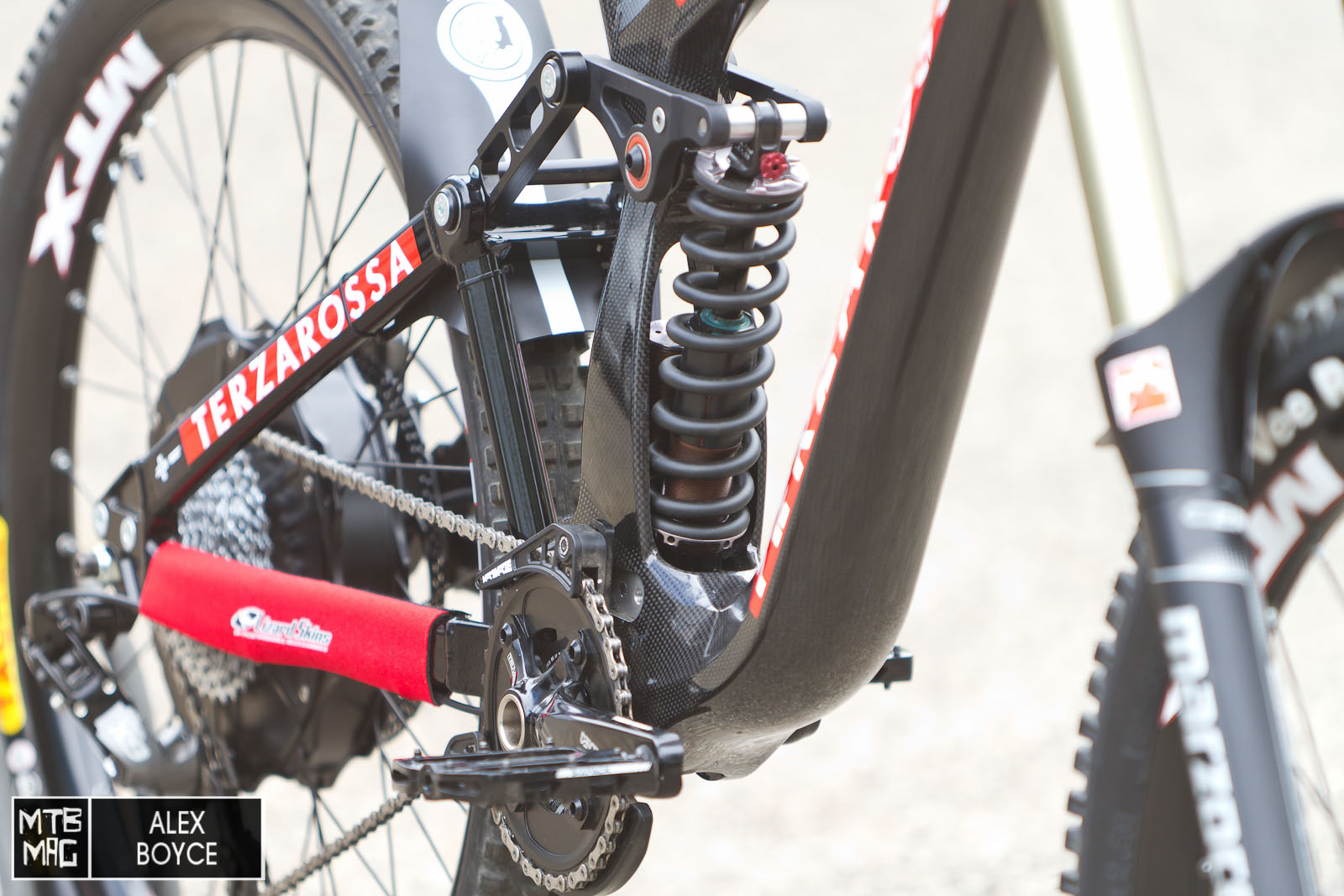 The carbon version uses an aluminium rear triangle and is finished in natural carbon. The linkage is the same on the carbon. 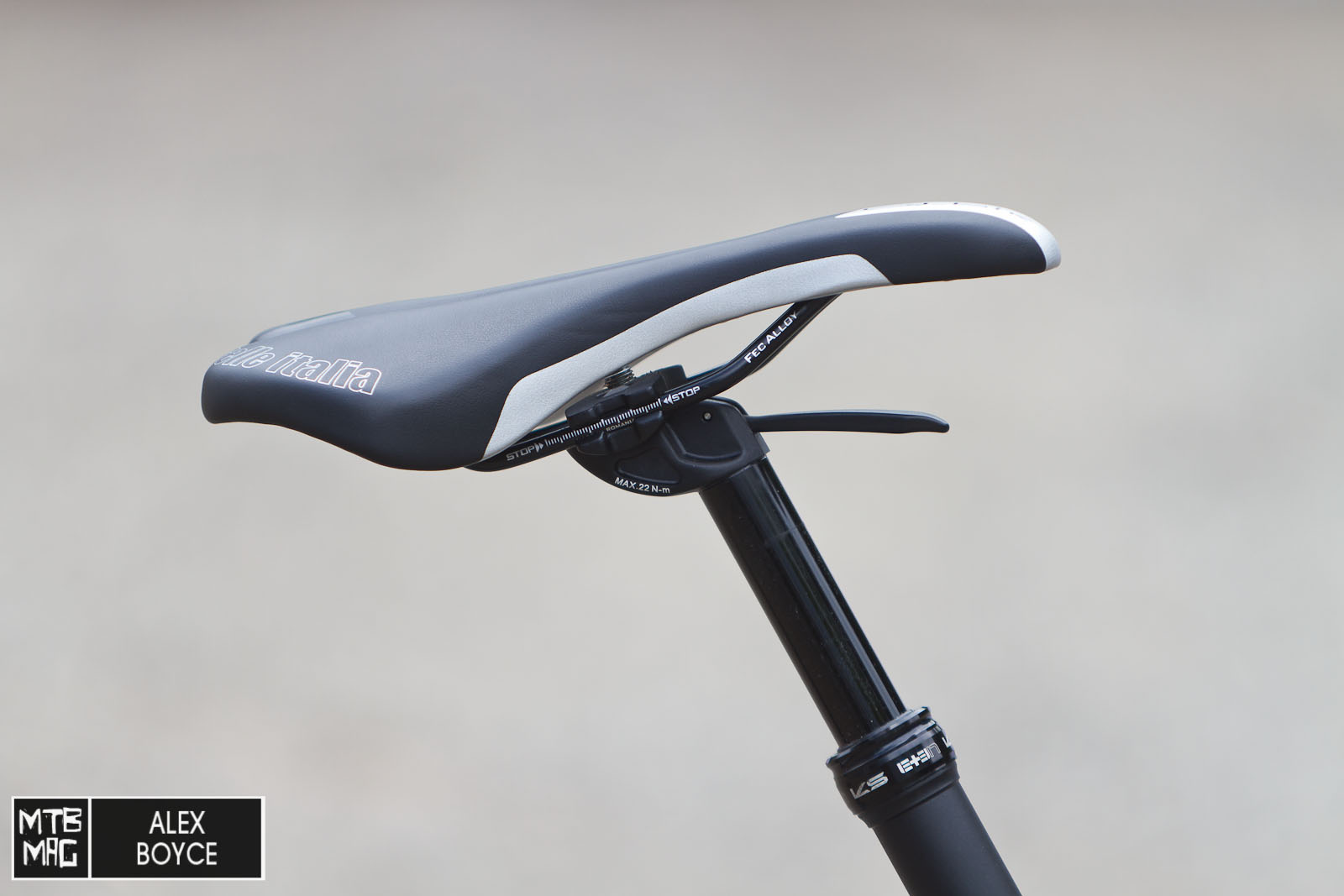 Both versions are available with a LEV hydraulic seat post.

We spent an afternoon on the GP380 and will publish our riding impressions in our next article, a few photos though give an idea of what is coming. 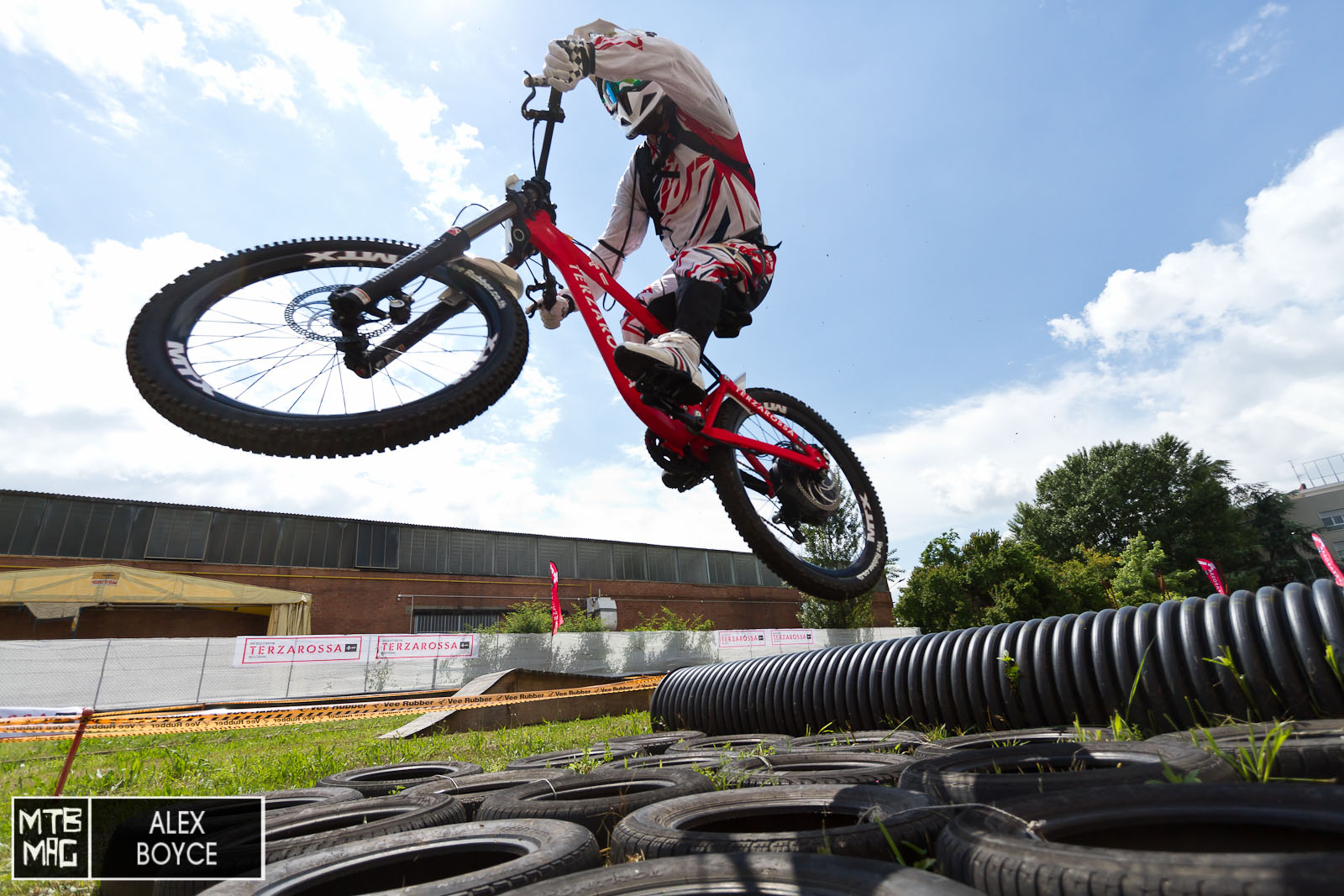 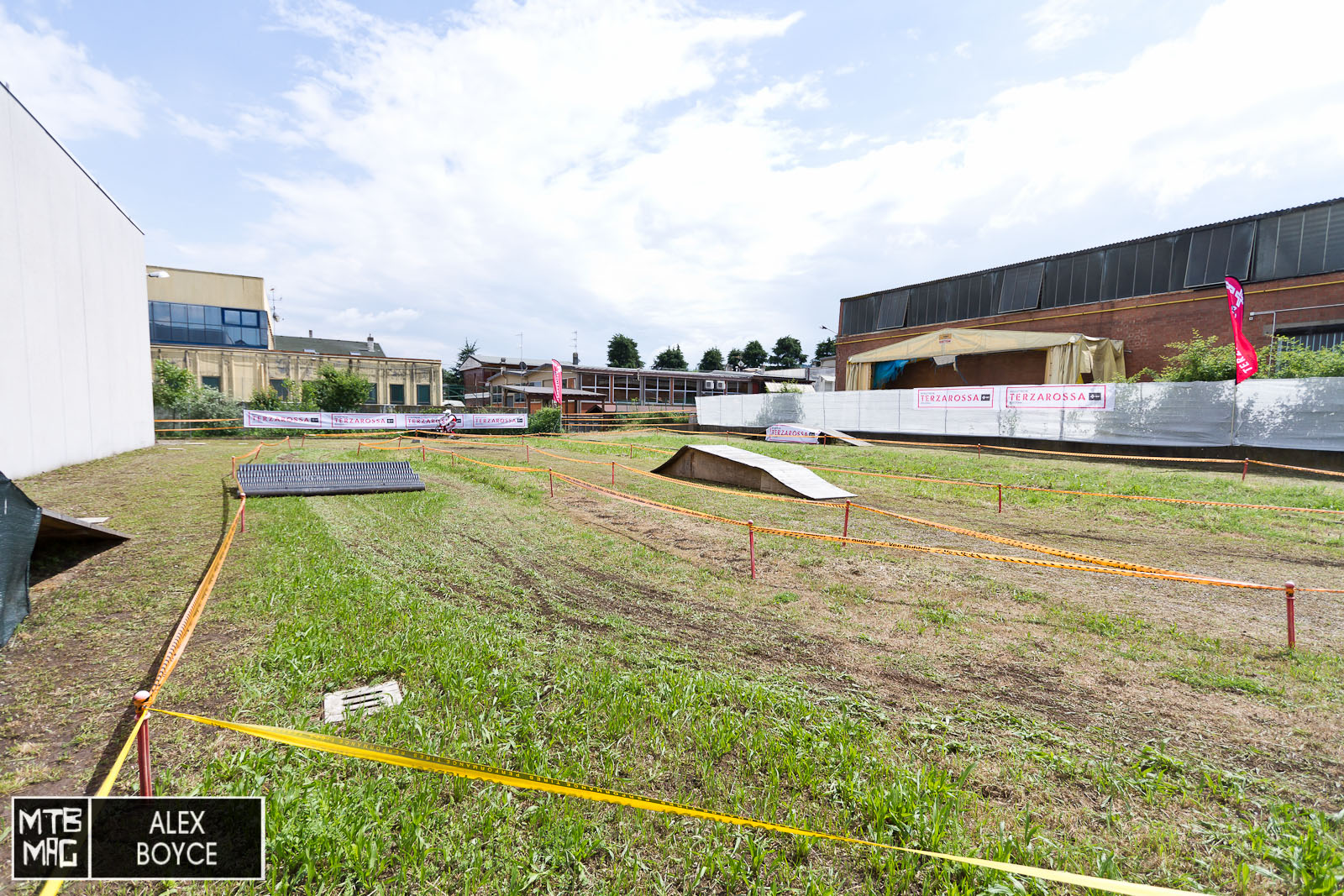