Those who use Strava know that when recording data with a device equipped with a thermometer such as the Garmin Edge series, it is possible to see the average lap temperature in the summary of the “additional” information, ie it is necessary to click on “see more” to reach this data. From the desktop, if you look at Strava through the app on a smart phone, the temperature does not appear right.

Klimat adds other meteorological data to Strava, which become visible immediately under the name of the training session, regardless of whether you use a computer or a phone:

My Strava account is in English, so you can find Klimat data in that language, but you can change it if you upgrade to the paid version ($ 1 per month). A great deal of the most widespread languages are also available. Not only that, you can choose what to show and what not to show by editing the “Weather Template” field according to the explanation below. If you want to use your dialect, you can do it. 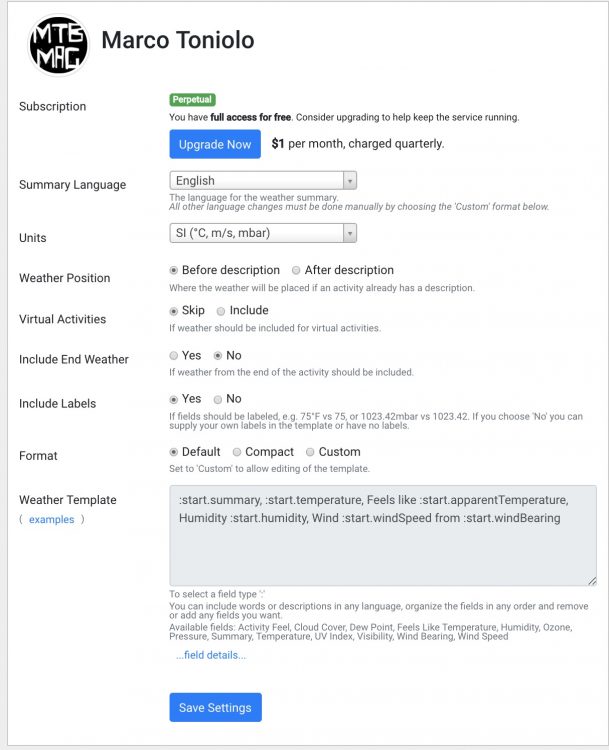 Here’s what you can choose to show on Strava (paid version). Personally I would not mind an air quality index, like the one available on the Swiss Weather app. 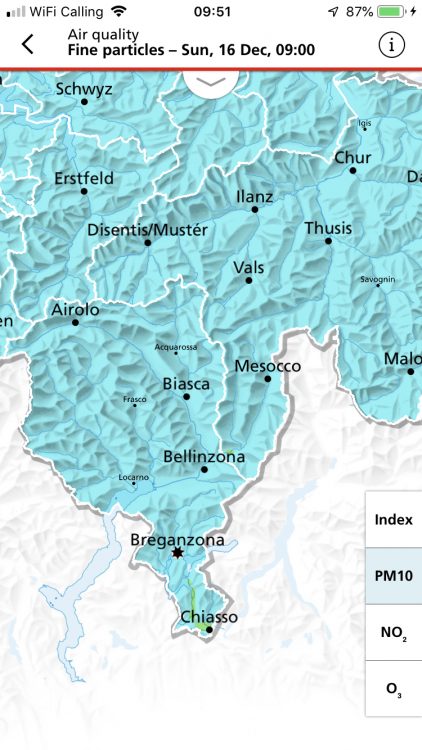 The Dew Point is the temperature at which, at constant pressure, the air (or, more precisely, the air-vapor mixture) becomes saturated with water vapor. In meteorology in particular, it indicates at what temperature the air must be brought in to make it condense in dew, without any change in pressure. If the dew point falls below 0 ° C, it is also called frost point. 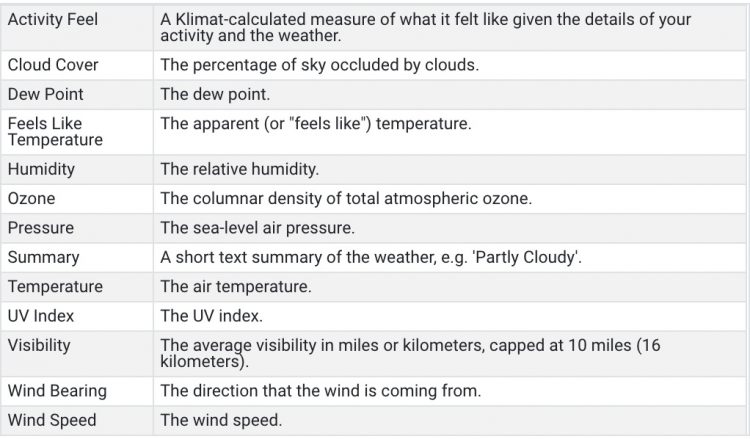 You can decide to show the weather conditions even when you ride indoors on a trainer. Obviously they will not be those of the room you are in, but the external conditions. You can also choose to show the conditions at the beginning and end of the lap.

A summary of the activities recorded with Strava and Klimat is then available on the Klimat website. 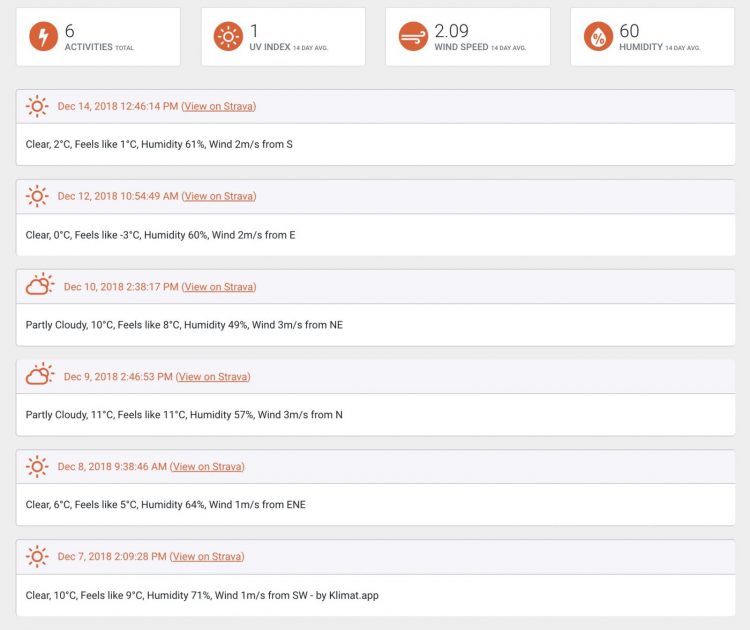 You do not need to pay to use Klimat, since it is available in a free version, only without all the options I have just listed. The most visible will be the words “by Klimat.app” which appears at the end of the weather data:

These are the differences between the free version and the paid ones: 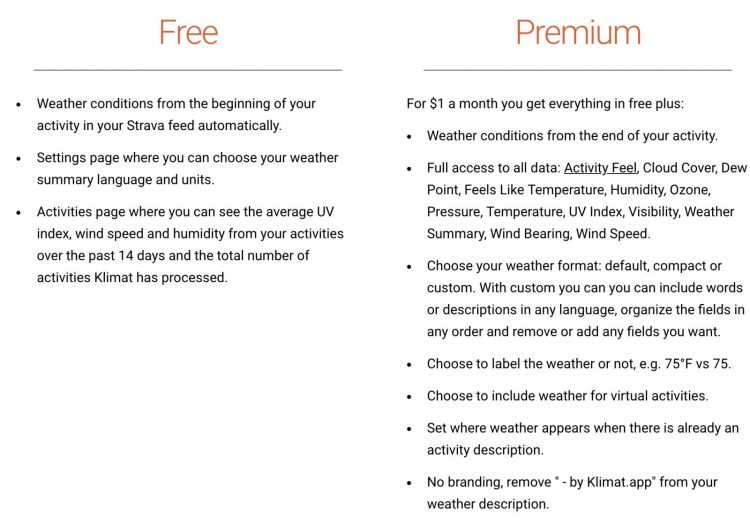 As for the activation on your Strava account, just click on “Connect with Strava”, accepting the conditions of use, and you’re done. It works the same way as our Training Camp  when you decide to import tracks from Strava. That is to say, if you go to Strava under “settings / my apps”, there you will find all the apps that have access to your profile. If you do not want to use Klimat anymore, simply remove it from Strava. 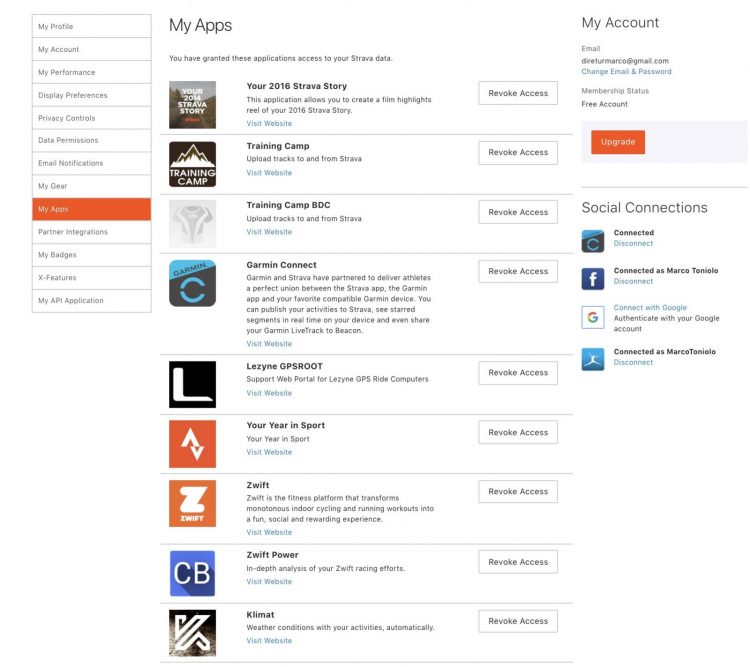 Klimat is a small but nice app, well coded and full of nice details. It won’t change your life, but there are no reasons not to use it, at least in its free version. If you are a nerd who wants to keep a precise diary of their training, you can’t do without it.

[Video] The Other Side