Although I’ve ridden many of them in various iterations over last few years, it’s been quite some time since I’ve personally tested a Fox 36 for the sake of a long term review. Recently, along with the release of the new 38 – which kind of stole the spotlight – the fork received a complete revision with a retooled chassis and a slew of new features. Read on for a deep dive on Fox’s premier do-it-all fork… 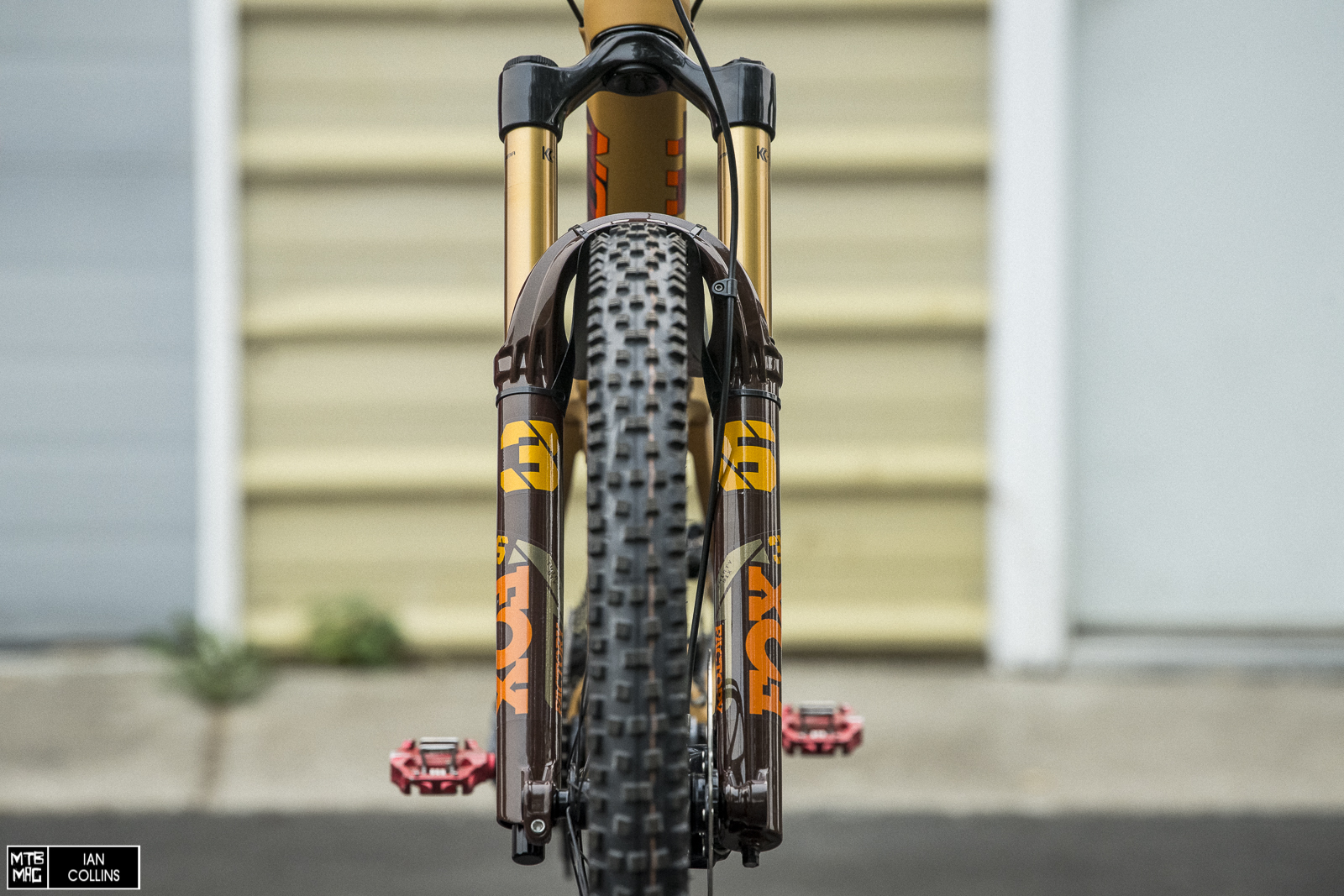 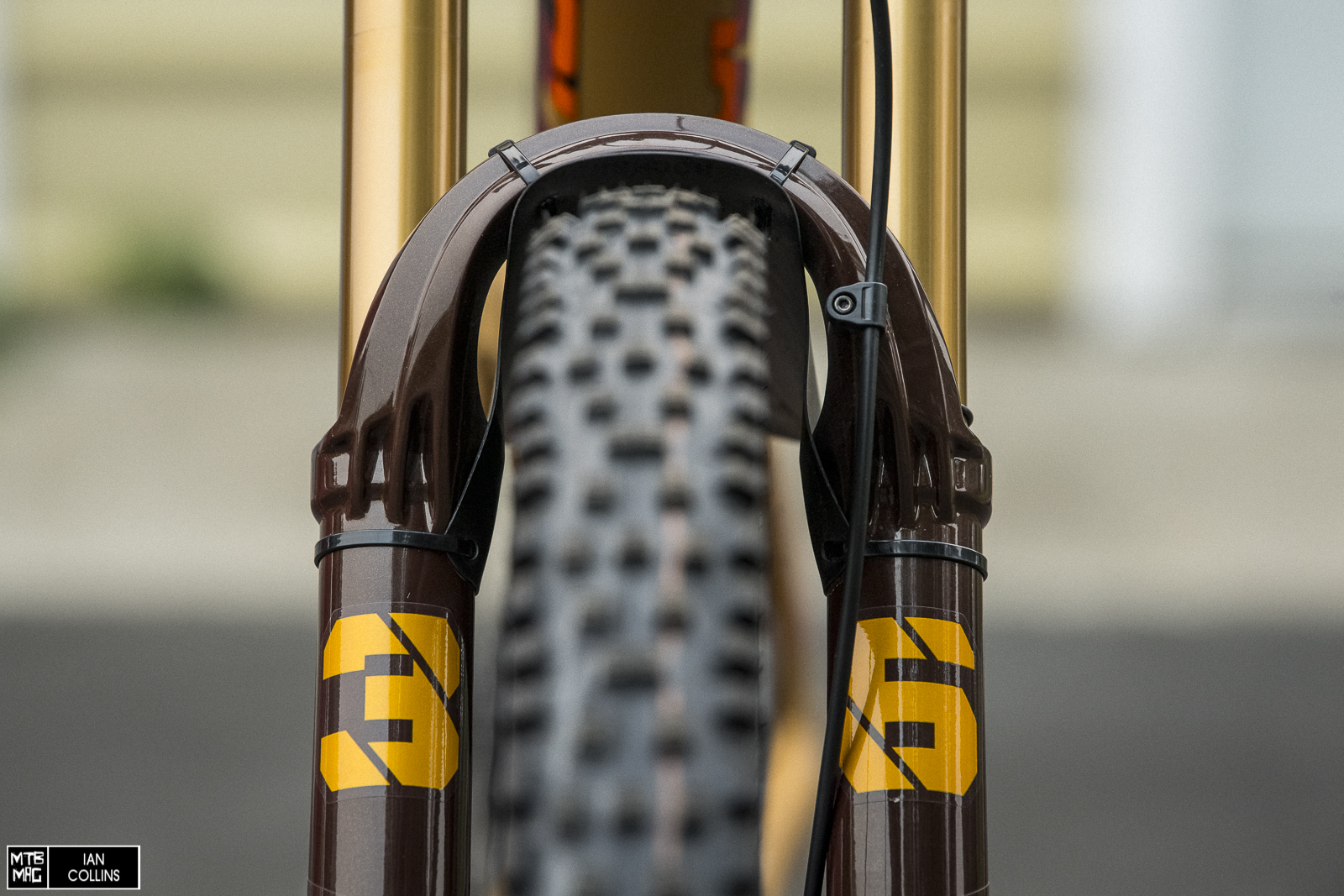 Visually, one of most obvious changes is to the arch on the lower leg assembly. Its rounded shape has been met by mixed feelings, but personally I really like the look. The other slap in the face obvious standout is the rad limited edition colorway. In the case of the 36 here, it’s Rootbeer. The 38 and 40 are/were available in Pistachio and Battleship Grey, respectively. 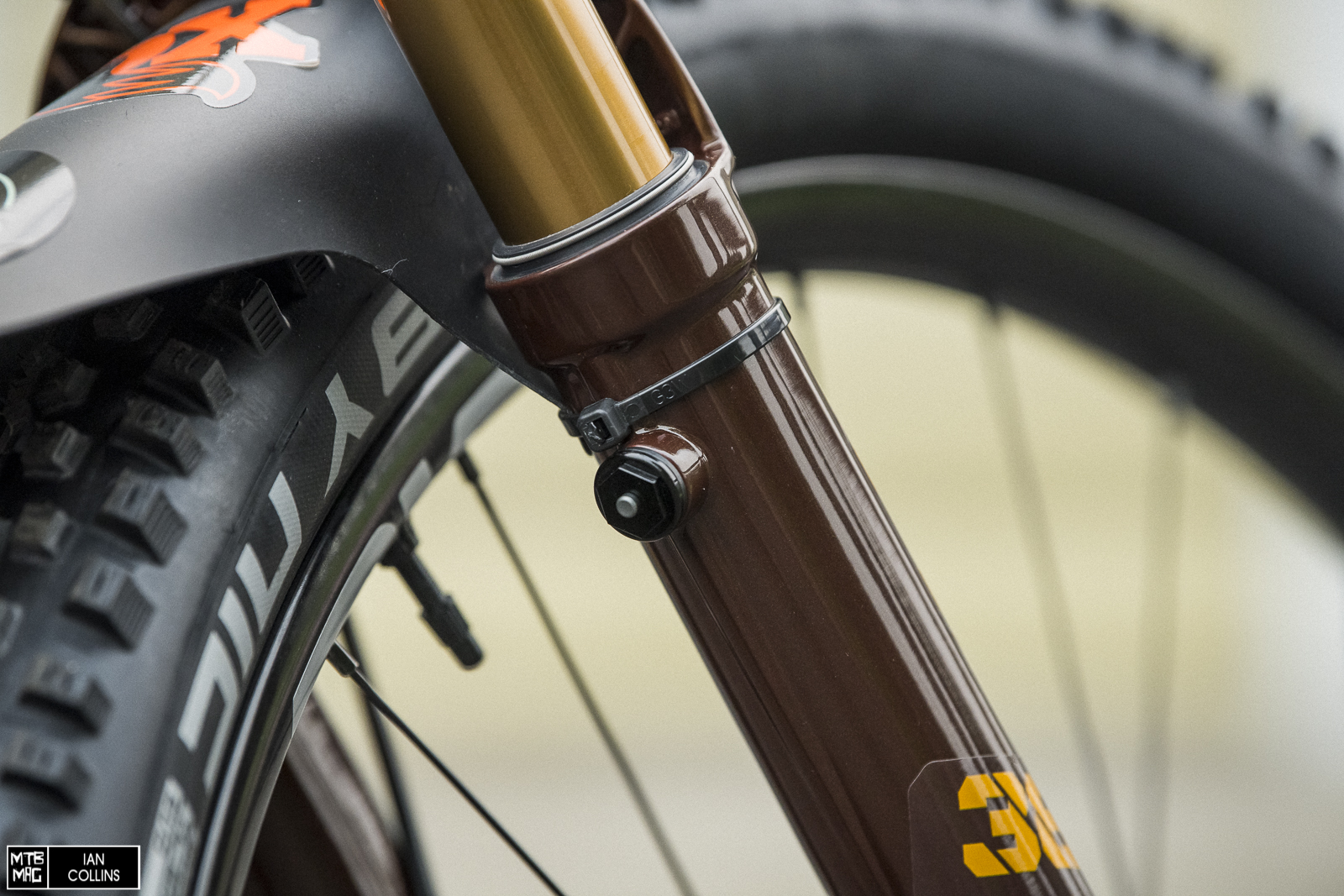 In terms of new features, the 36 has air bleeders in the lower leg assembly, seen above. With the press of a button you can neutralize the trapped air in the lower leg assembly. This keeps performance consistent regardless of your present altitude. If you live at sea level and go on a road trip to start a ride at 7,000 feet, well now you won’t be messing around with jamming zip ties into your seals.

Upon close inspection, you can also see the lower leg channels beginning above the bleeder, running through it and tapering down as they work their way toward the axle. In short, the channels increase air volume in the lower legs, which prevents excessive ramp. They also clear a pathway to help encourage the lower leg bath oil to find its way up to the bushings and seals higher up on the fork, thus making things even smoother. 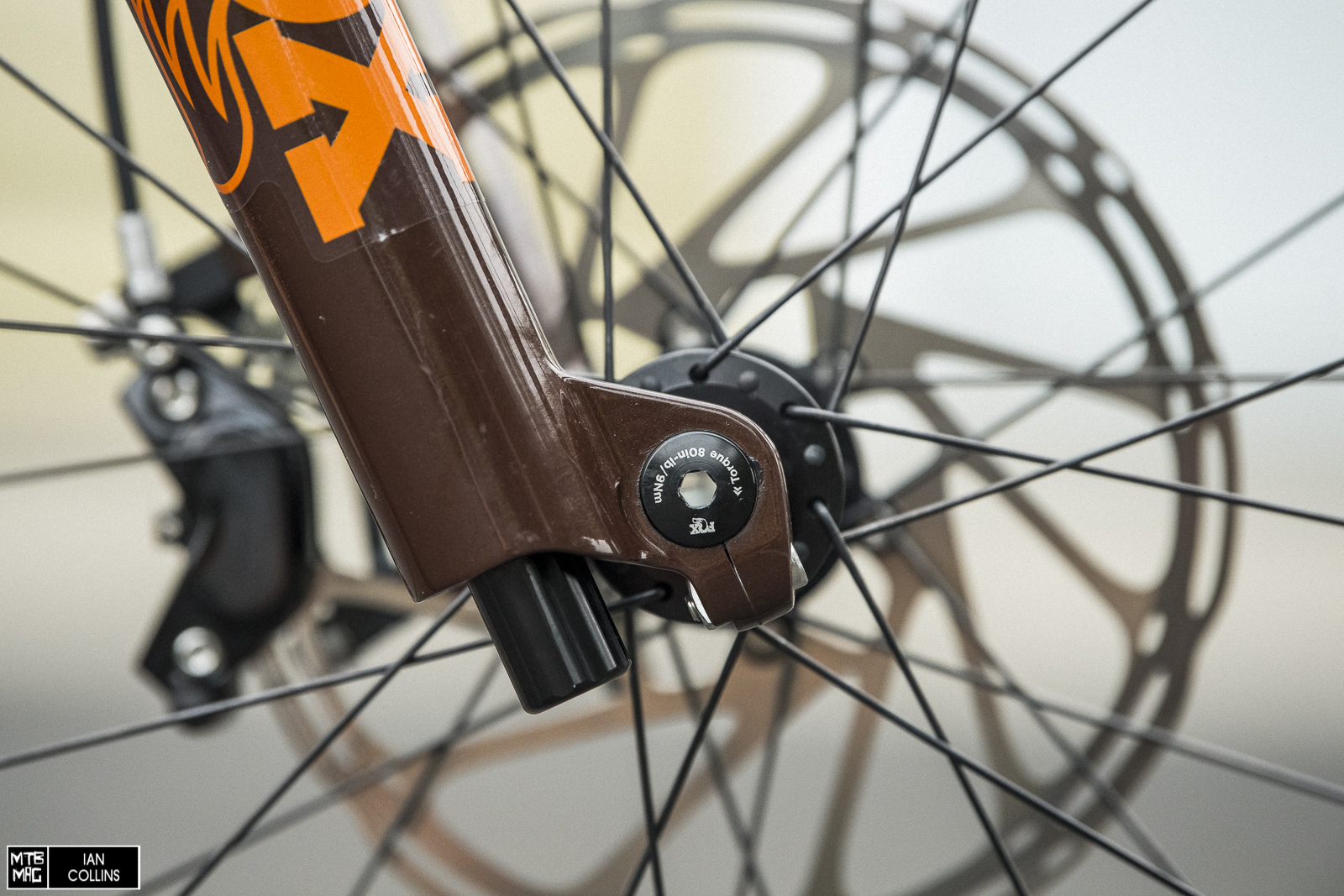 Yet another new feature is the floating axle. Essentially, a step in the axle cinches up against the hub to tighten the wheel, then on the drive side the lower leg has some lateral float on the axle until it is cinched down. It’s best to cycle the fork before cinching, thus ensuring that everything lines up naturally to ensure that there is no binding between the upper and lower leg assemblies. The fork ships with a quick release axle, but is also available with the “Kabolt” shown above, which saves a few grams and cleans things up aesthetically. 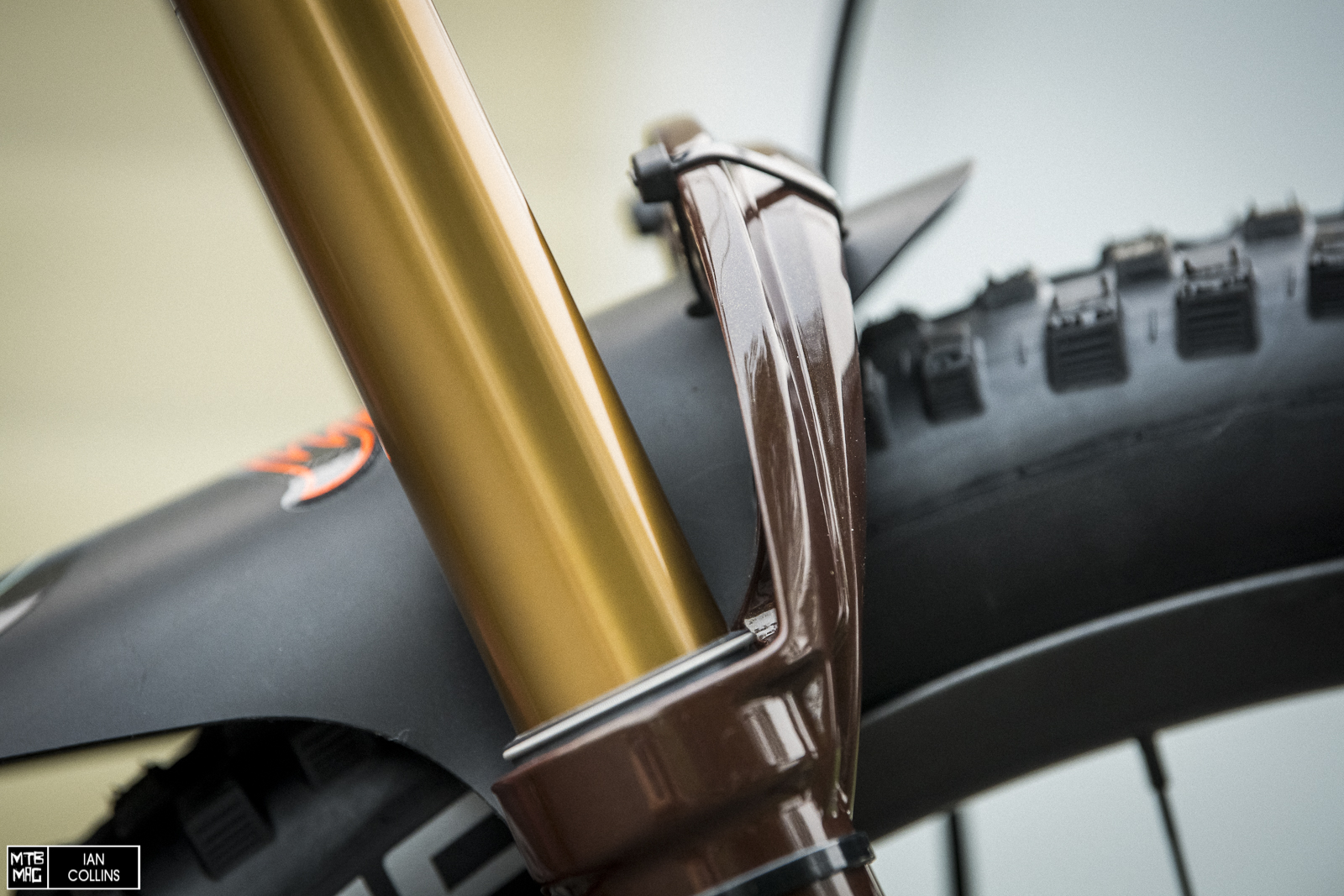 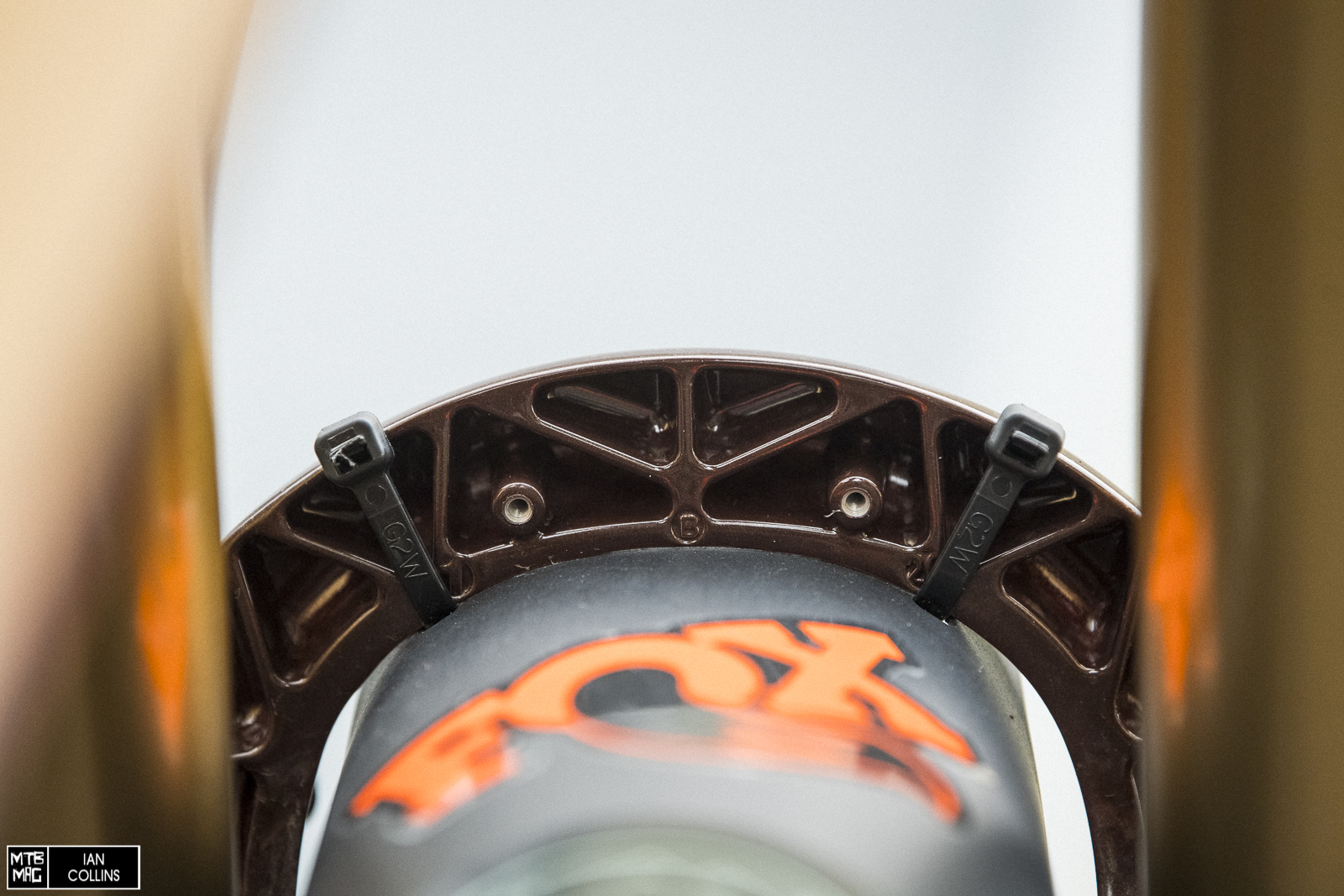 While we haven’t gotten a chance to test one out yet, Fox now manufactures fenders for their forks, which screw into the two inserts shown above and also around the air bleeders. For now a good old fashioned Marsh Guard will have to suffice. 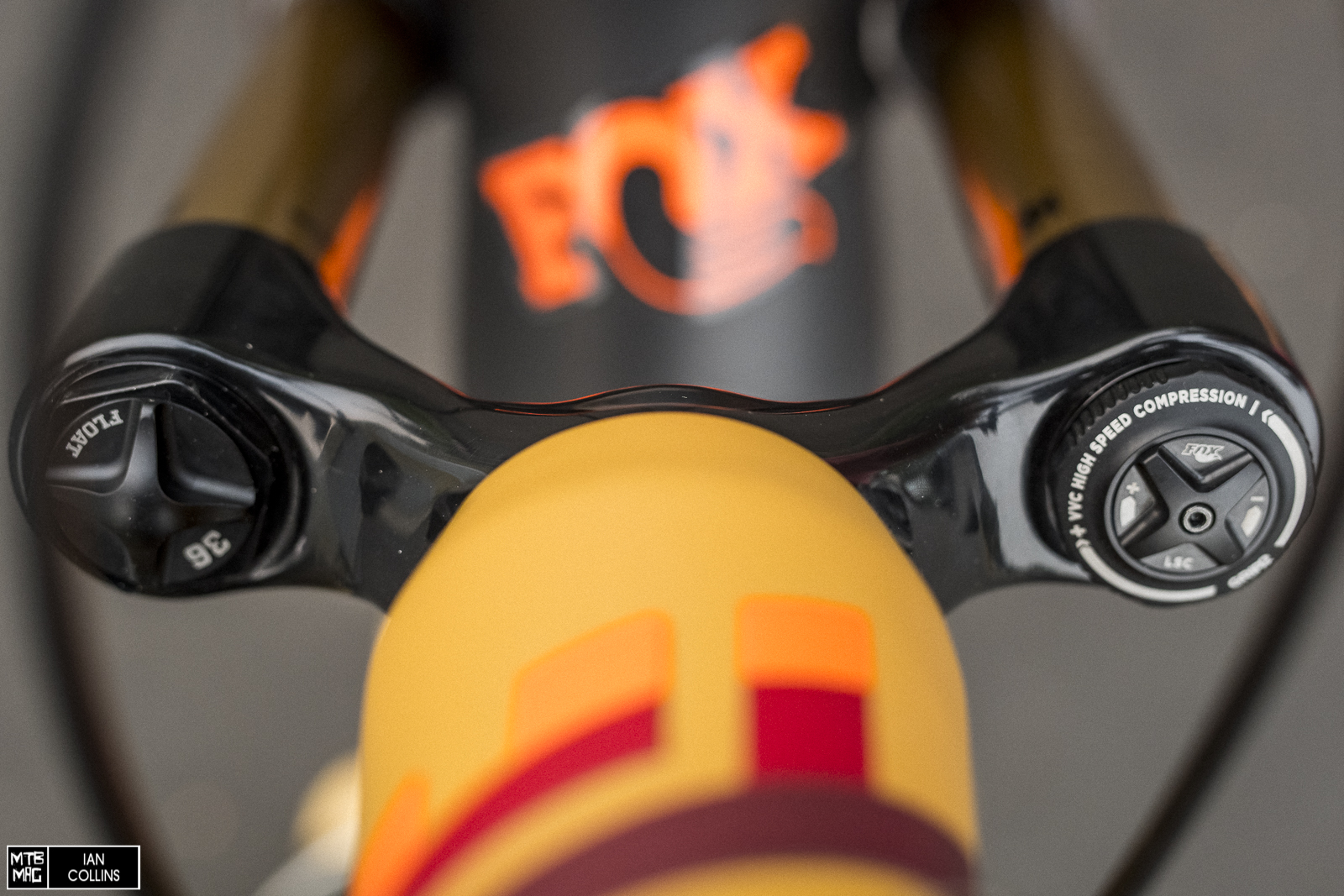 Starting with setup, I found that the tuning guide on Fox’s website turned out to be very spot on. In fact, I hardly strayed from the recommended settings by much more than a couple PSI and a click or two. Early on I found the fork’s action to be smooth and supple, with its overall feel very much defined by its damping. It’s tricky to unpack, but part of what I mean is that I found the air spring to have a flawlessly even progressive curve from beginning to end.

There is no hammock in the middle, it doesn’t dive into its initial travel too easily, and it certainly isn’t shy about achieving full travel. Therefore, with such a consistent air spring curve, you can independently feel the damping and the adjustments you make to it and separate those feelings from that of the air spring curve rather easily. On this model a click or two of damping adjustment is rather perceptible, which wasn’t necessarily the case with past 36 models. If you haven’t picked up on it, this is a good thing regardless of whether you fall into the knob twiddler faction or if you self identify as a Luddite.

As far as this new Grip 2 VVC damper is concerned, I feel that the original Grip 2 was already excellent, but this is a cut above still. It offered up consistent damping and provided flawless control regardless of how long and hectic our descents were. Additionally, as mentioned prior, having less clicks actually makes the tuning process easier and I still feel that there is more than enough range with the right spread, covering lightweight riders through heavier ones nicely. 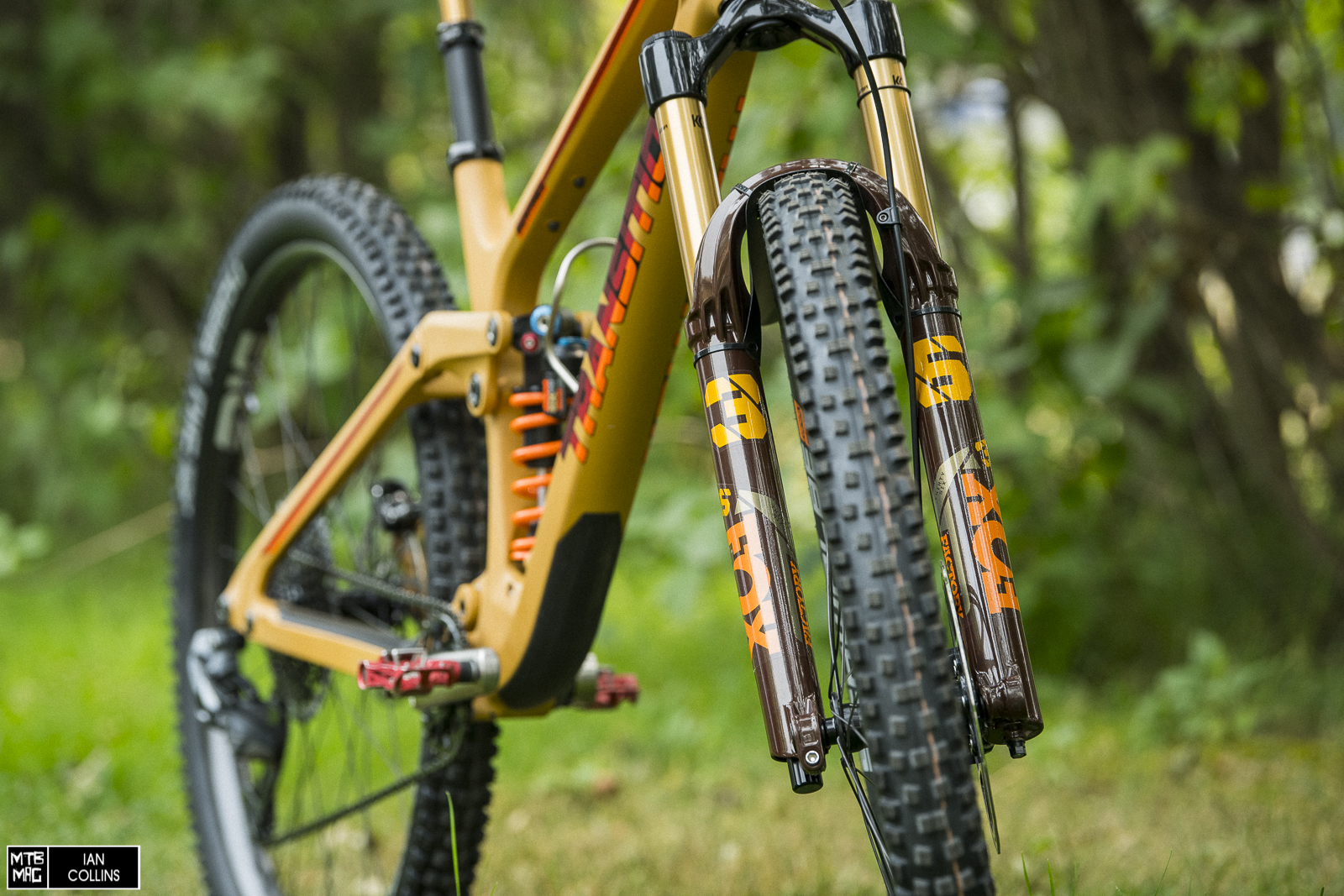 Now, as far as tuning the air spring is concerned, I bounced between two and three volume reducers. With two I tended to err on the side of higher pressures and with three I went lower…we’re talking about a range of about to 7-8 PSI, for what it’s worth. You can laugh all you want, but ultimately I found my happy middle ground by sawing a volume reducer in half and running 2.5. My rationale for this comes from my only small, but legitimate grievance with the fork: the bottom out bumper itself is quite hard.

With a more linear setup and more frequent bottoming, once in a while I experienced some unpleasantly harsh bottom outs and I think it may have to do with the durometer of the bumper, its shape/size, or perhaps some combination. That said, with the more progressive setup (read 2.5 and/or 3 volume reducers) I never once felt a rough bottom out. With 2.5 volume reducers, I often used most or all of the travel, but with 3 I did not.

As you could imagine, having a consistently progressive air spring meant that the fork checked all the boxes regarding initial sensitivity, mid stroke support and bottom out resistance. 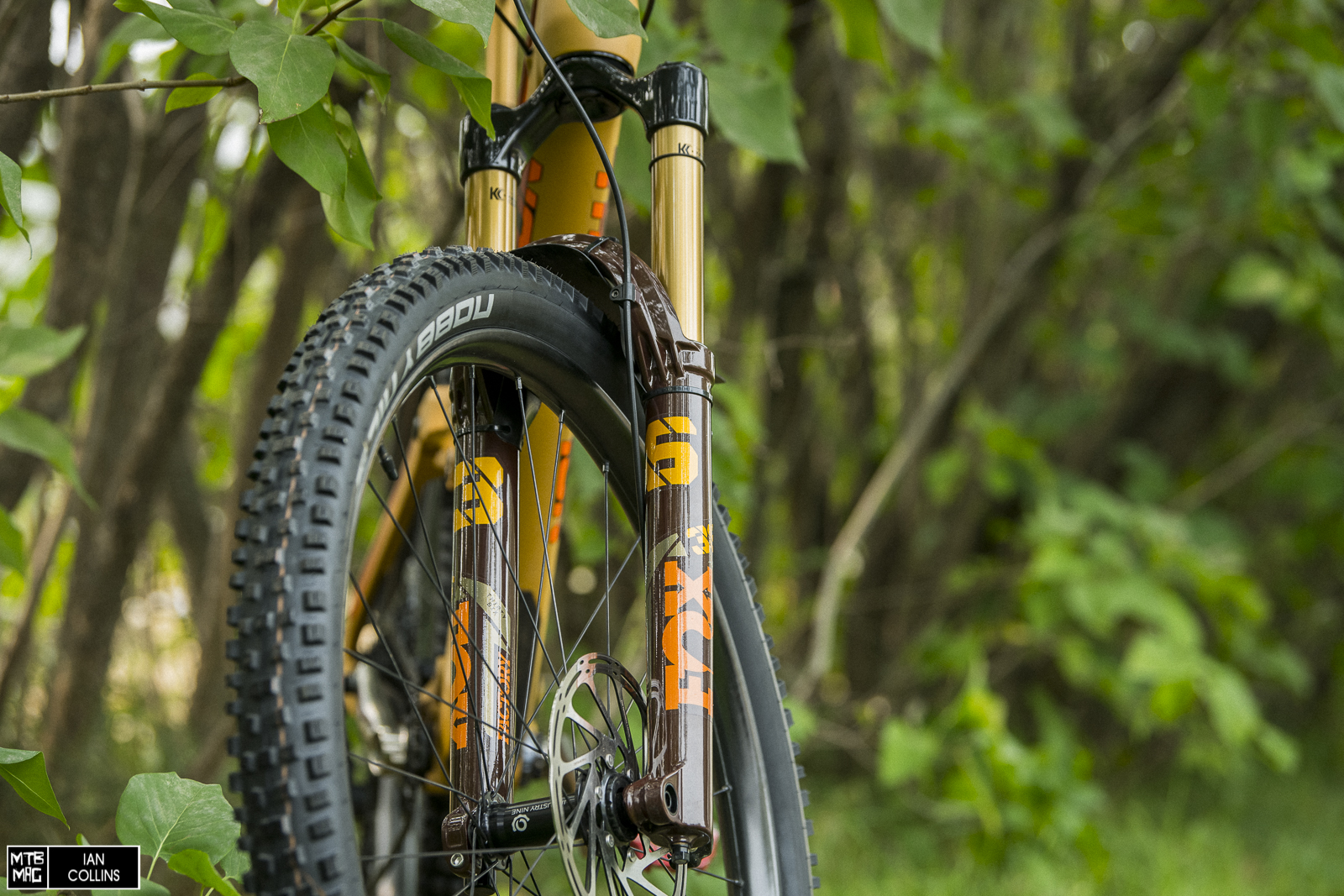 As far as chassis is concerned, I think Fox really hit the mark here. While it’s difficult for me to feel any glaring difference on trail, as compared to past 36 models, it is at least as stiff and accurate in its handling, and according to Fox, it has made marked gains in its rigidity, due to the new design. Regardless, the 36 has been and continues to be a class leader in this arena.

In terms of where it lands on the duty spectrum, this fork covers the broadest user base, or certainly will appeal to the largest number of mountain bike riders, where bike sales within its intended category very high in the industry. Having spent extensive time on the 38, which I feel is also excellent, I think that most mountain bikers will be more than pleased with the 36 and find that it is “plenty of fork”. They’ll also be pleased to save about a pound of weight on the front of their bike.

The point being, 38 should be reserved for those who are constantly frequenting the most rugged terrain, where the 36 is a champion of the working class. It’s still enough fork for the bike park and the occasional enduro race, while being lightweight enough that it won’t ever feel burdensome on day to day rides.

In summary, despite being a bit drowned out by the release of the 38, the new 36 is very much worth being excited about. Its chassis, damper and air spring see subtle but important improvements, which all shine through when you feel the sum of its parts on trail. Fox also deserves high praise for some of the new features – first and foremost the air bleeders. Having recently moved to an area that offers massive descents I can say that I absolutely loved that feature and it should not be casually passed over as some sort of gadget.

Other things like the fender, air channels and floating axle are the icing on the cake. Perhaps for 2022 my one gripe, the bottom out bumper, will receive an update, but in the meantime it isn’t all that hard to tune around. Lastly, I generally try to refer back to value in my closing statements on a product. At $1,099 the Fox 36 cost around $150 more than its main competitor – the RockShox Lyrik Ultimate, but I do feel that its increased adjustability and brilliant features make that price disparity justifiable. If that cost is a bit too high in general, it’s worth taking a look at the 36 Performance Elite model, which sheds its Kashima coating, and subsequently runs a bit lower in cost. All in all, the new 36 is a damn good fork.