For exactly a year now I’ve been riding a set of the crankbrothers Synthesis E11 wheels on a few different bikes – mostly a Specialized Stumpjumper and an Evil Offering. At this point, they are one of just two wheelsets that are designed from the ground up specifically with compliance and forgiveness in mind – the other being Zipp’s 3Zero Moto (You can check out a comparison from our Italian editors, here). Aside from serving as a standard long term review, the intent of this article is to hone in on how crankbrothers designed the front and rear wheels purposefully to address the individual dynamics they’re tasked with managing on trail. 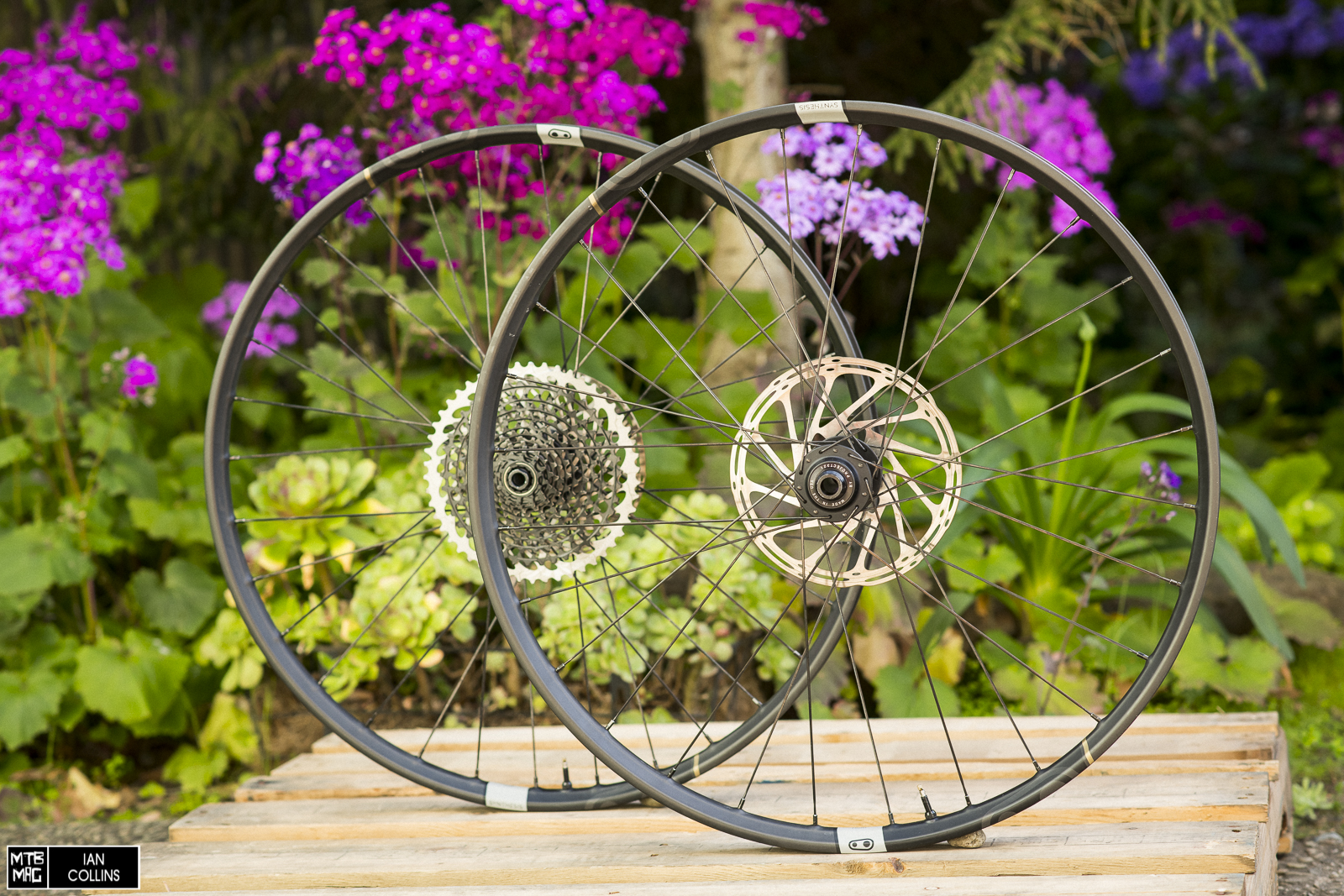 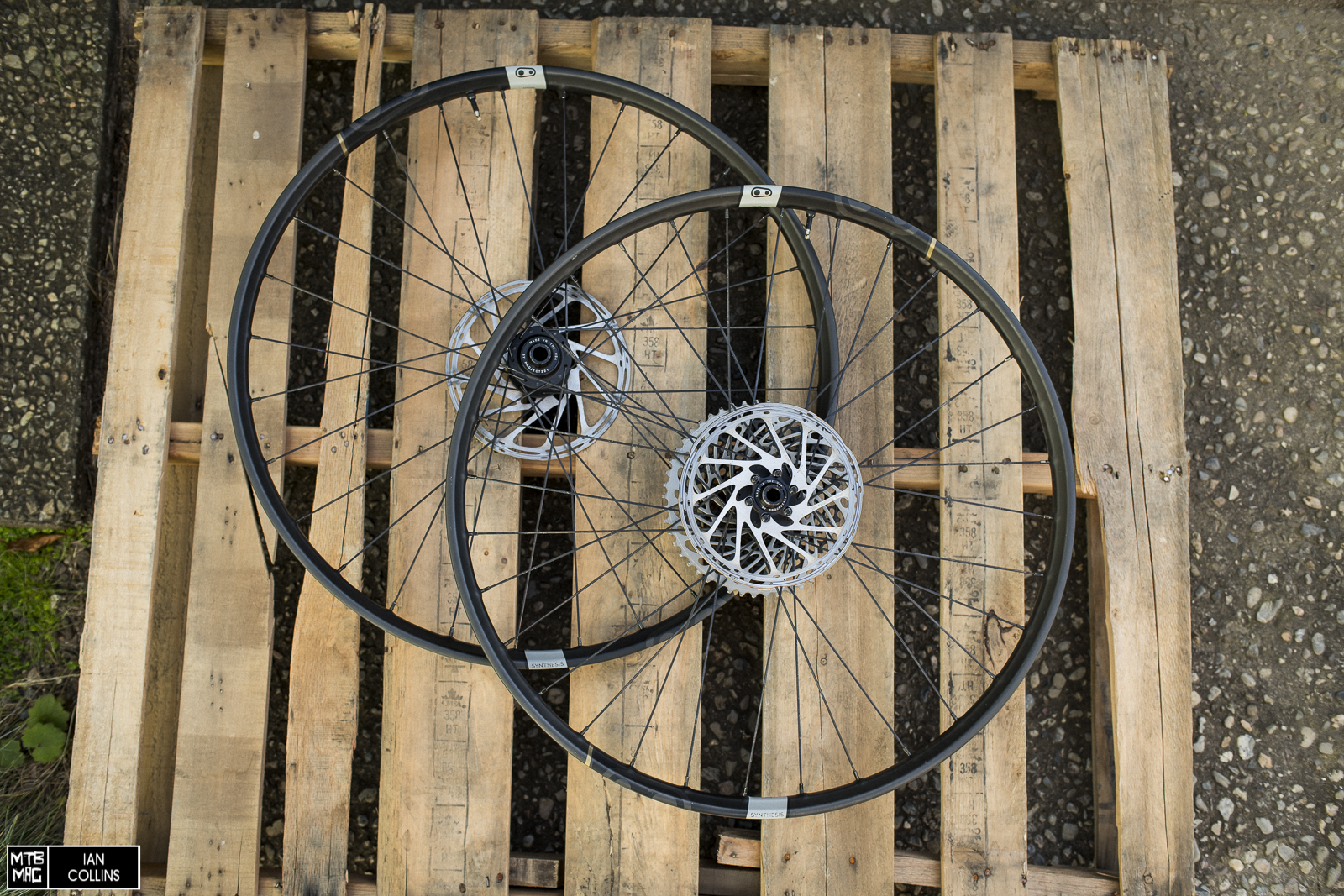 Starting out with less front spokes (28) and more rear spokes (32) is definitely a start in achieving different ride dynamics from the front and rear wheel. That idea isn’t wildly radical – Roval did just that for years with a 24/28 hole wheelset. Once you dig into the finer details in the rims, you’ll see the extent crankbrothers went to with the Synthesis… 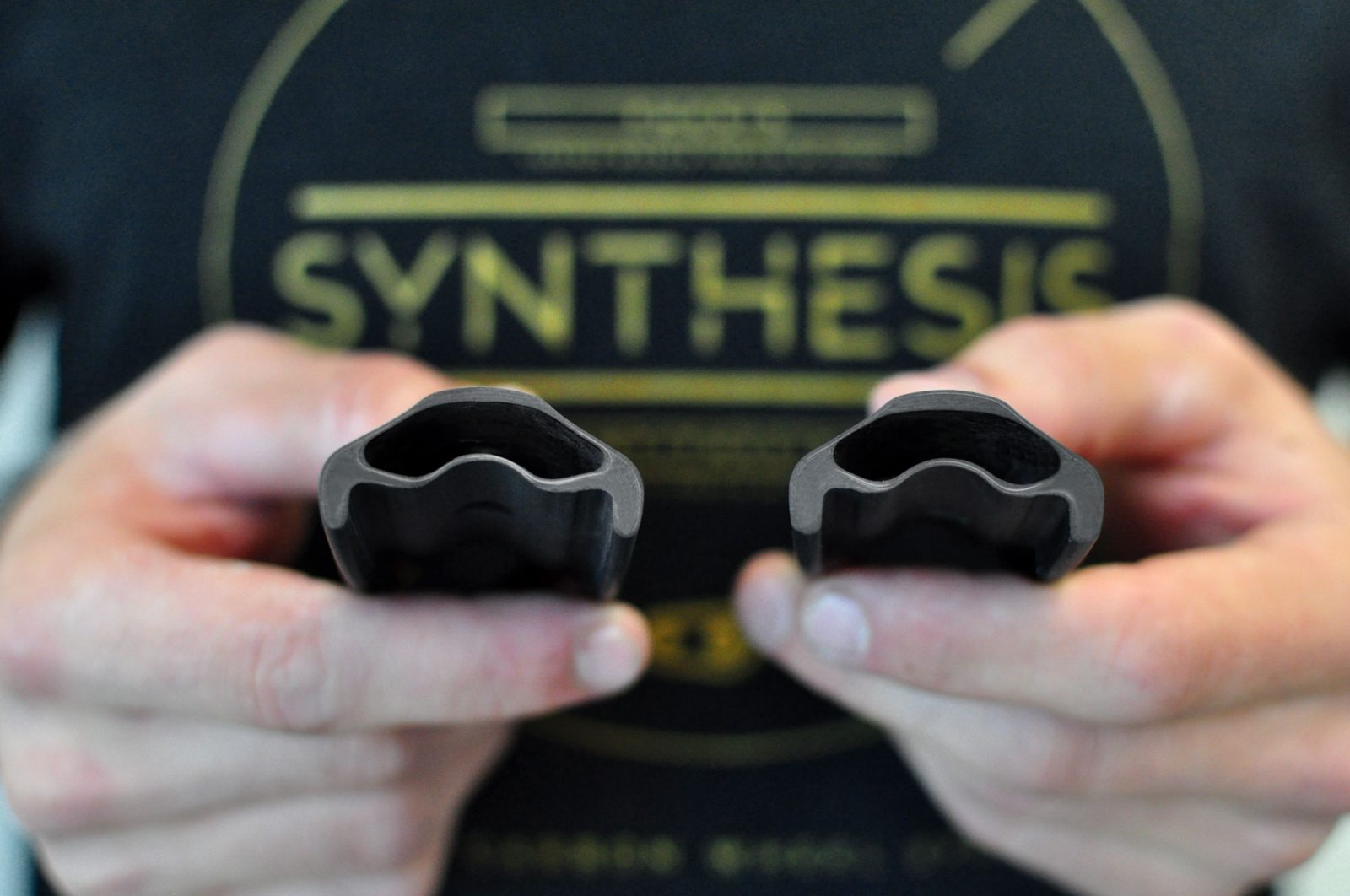 If you look carefully at the photo above, you can see that the rim wall (on the side) on the left is thinner than the rim wall on the right. There are a few advantages to this, which we’ll get into later… 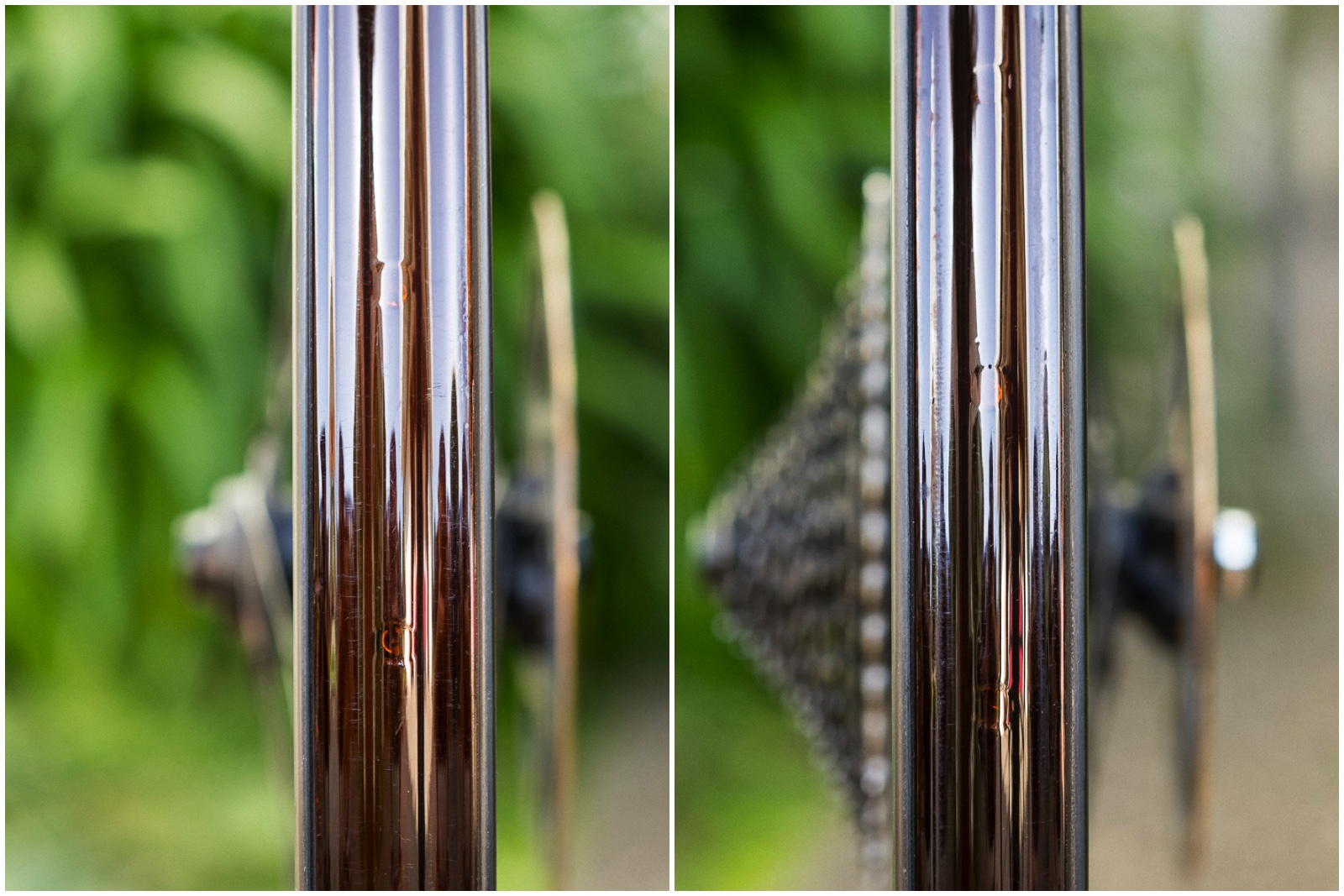 Another aspect that you likely won’t be able to see in photos is that the inner and outer diameter and vary front to back by a few millimeters within each respective variable. This is to help reach desired tire footprints amongst other things. 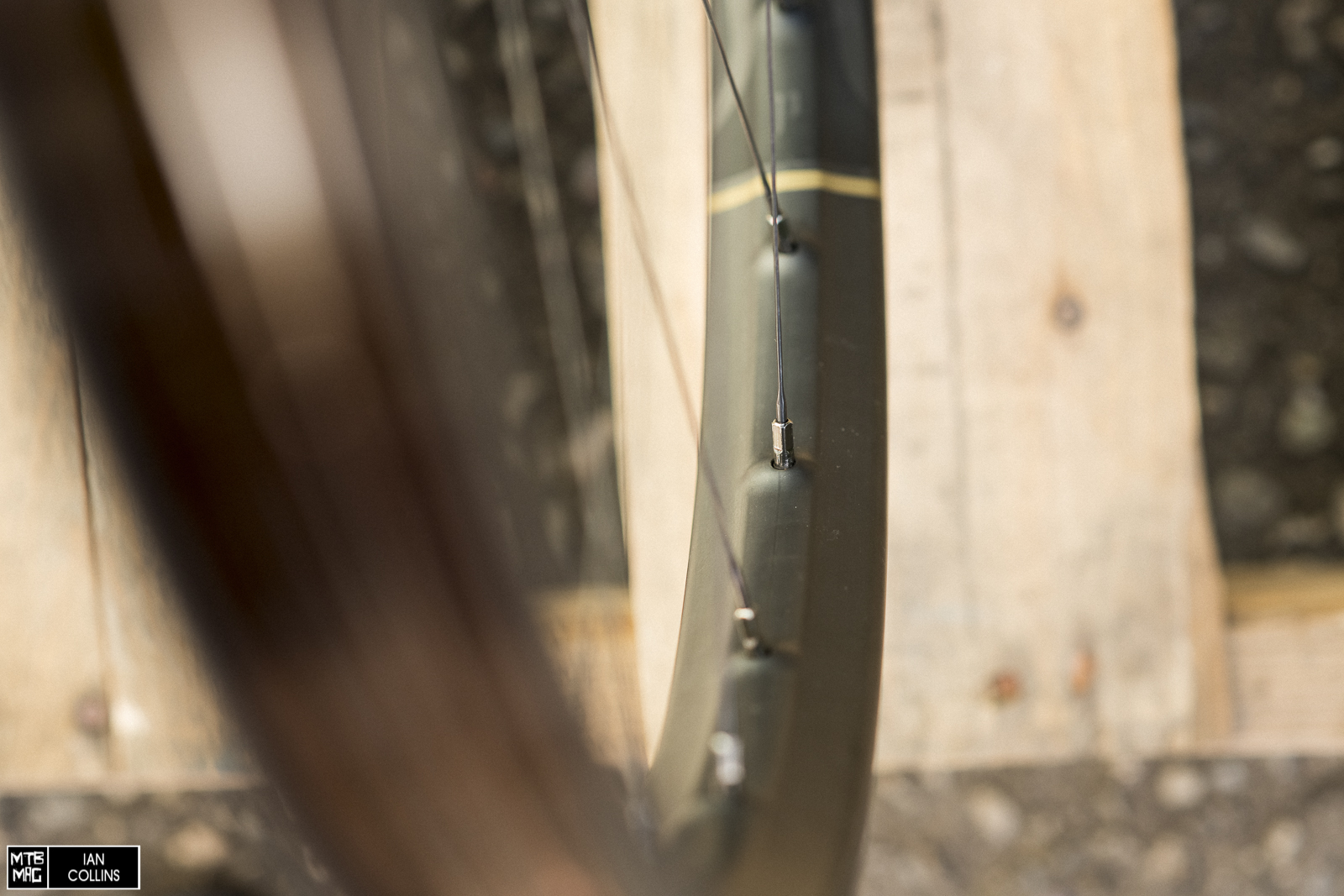 There are a few things worth discussing in the photo above – first and foremost, crankbrothers utilize a recessed and reinforced nipple bed, which help decrease stress risers in the rim. Second, despite weighing a bit more, they use brass nipples (as opposed to alloy) for their increased strength. Lastly, the spokes are bladed front and rear. Like most other aspects of the wheels, the spoke thickness varies front to back as well. The butting is as follows: 2.0 – (0.9×2.2) – 2.0 mm front, and 2.0 – (2.25 x 1.25) – 2.0mm rear. 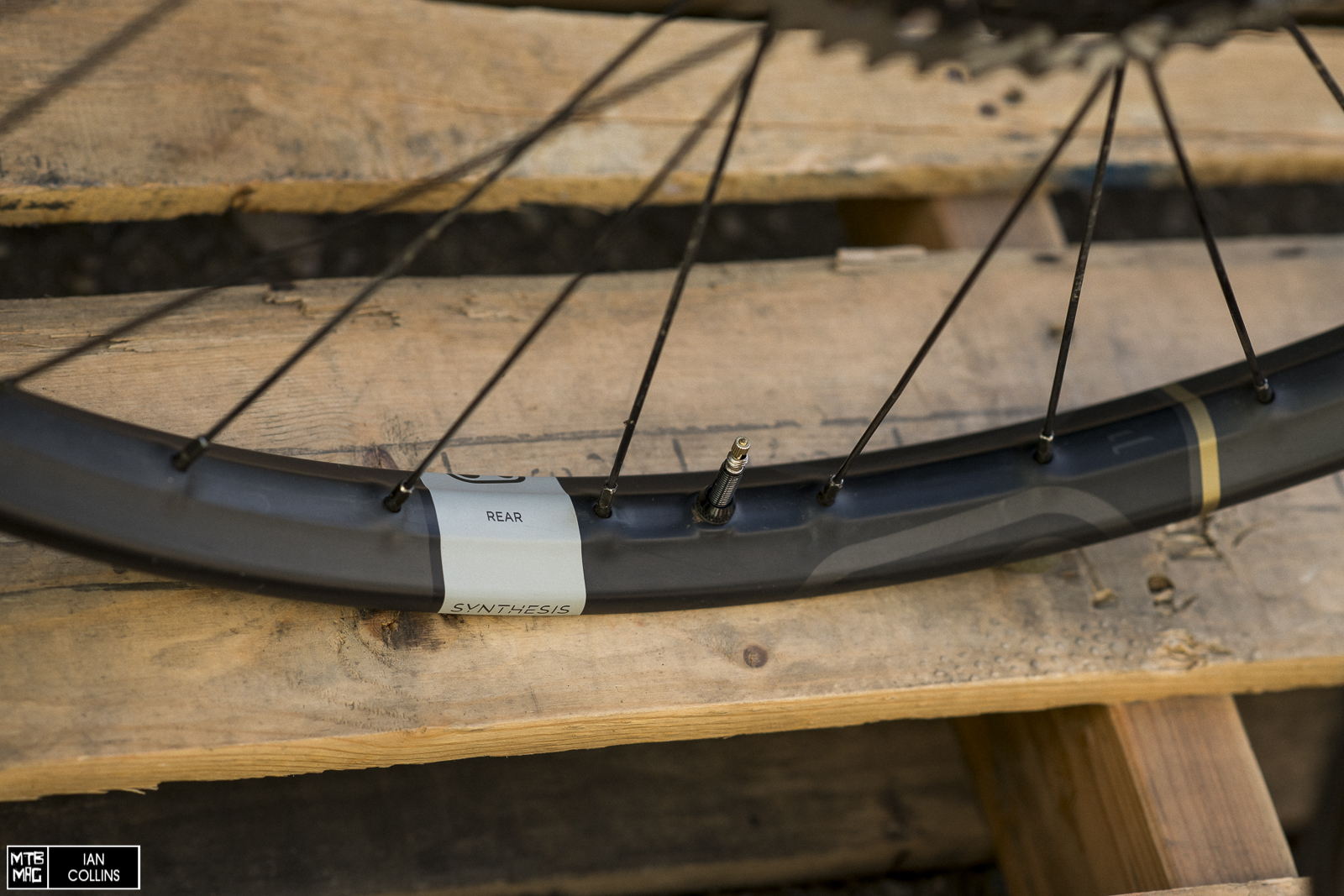 It’s a small matter, but worth noting that while the Synthesis wheels unsurprisingly use in-house crankbrothers valves, you may want to check with them regarding compatibility of other valves. By chance, I tried to install high flow e*13 valves and they did not fit. Not a huge deal, but worthy of mention. 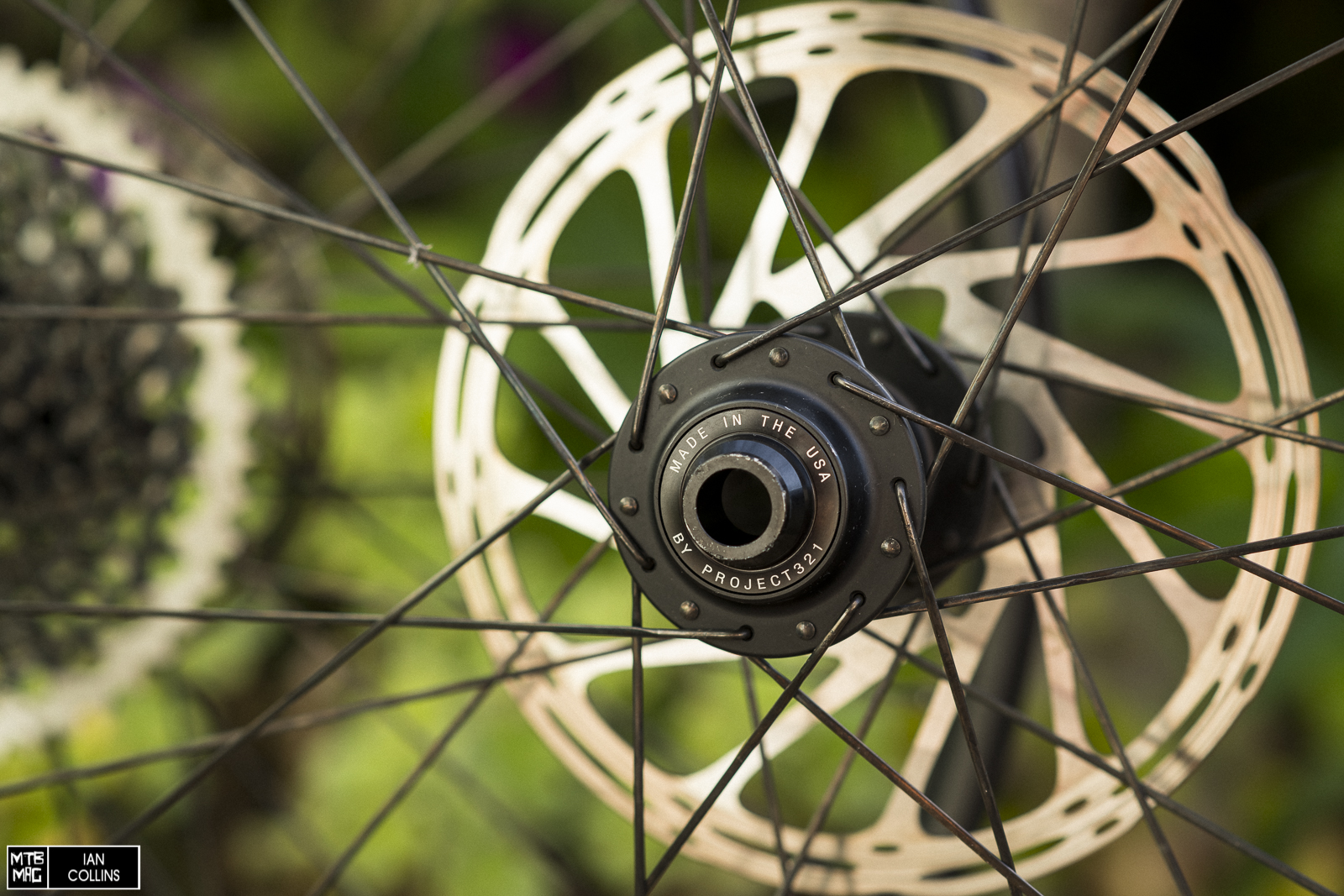 At the heart of it all are a set of very high end, truly unique hubs. Project 321 manufacture their hubs in Bend, Oregon with a completely different approach regarding the engagement, which uses magnetic pawls for a quieter sound and a dramatic reduction in drag. If you like loud hubs, you can opt for Industry Nine’s Hydra hubs instead. 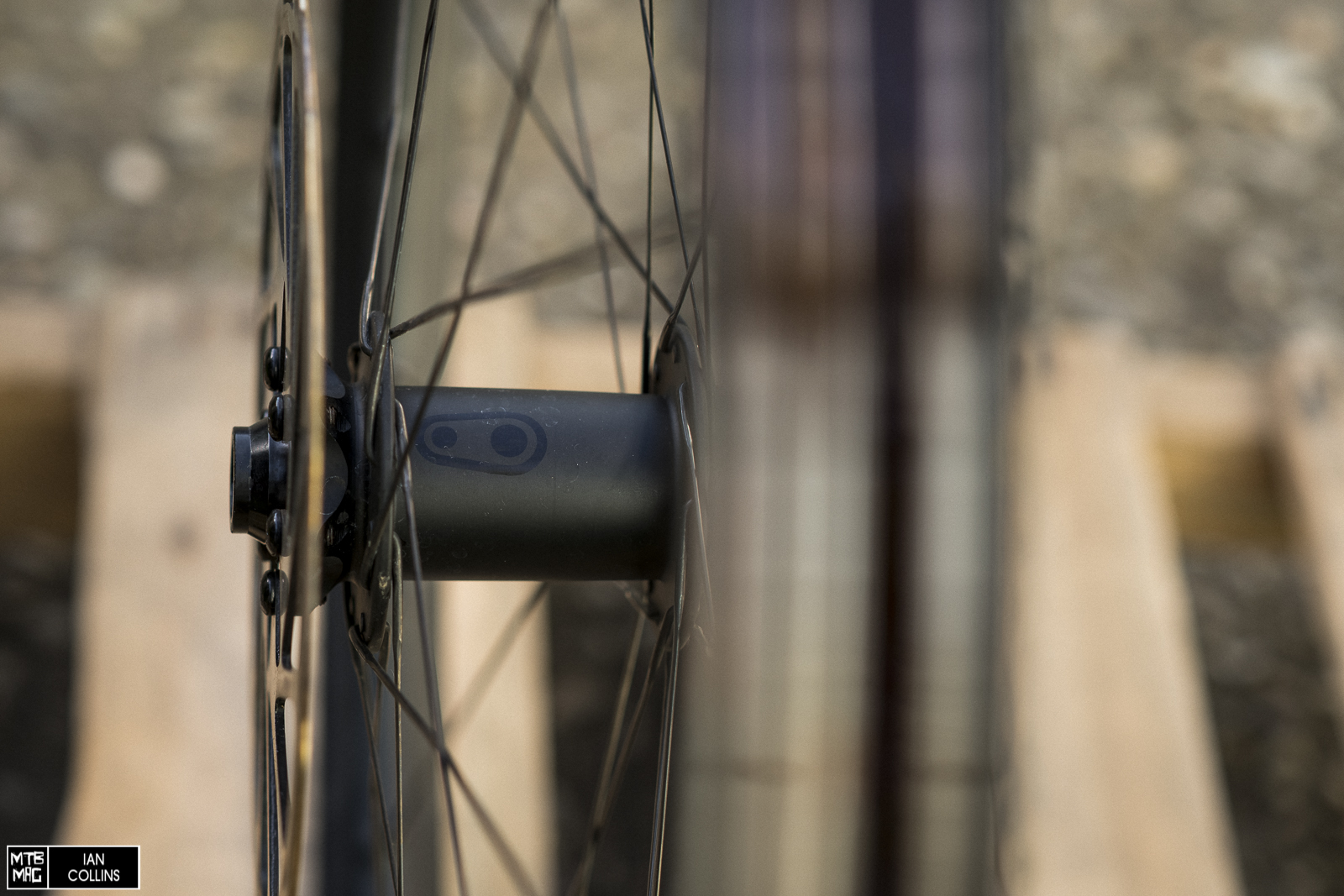 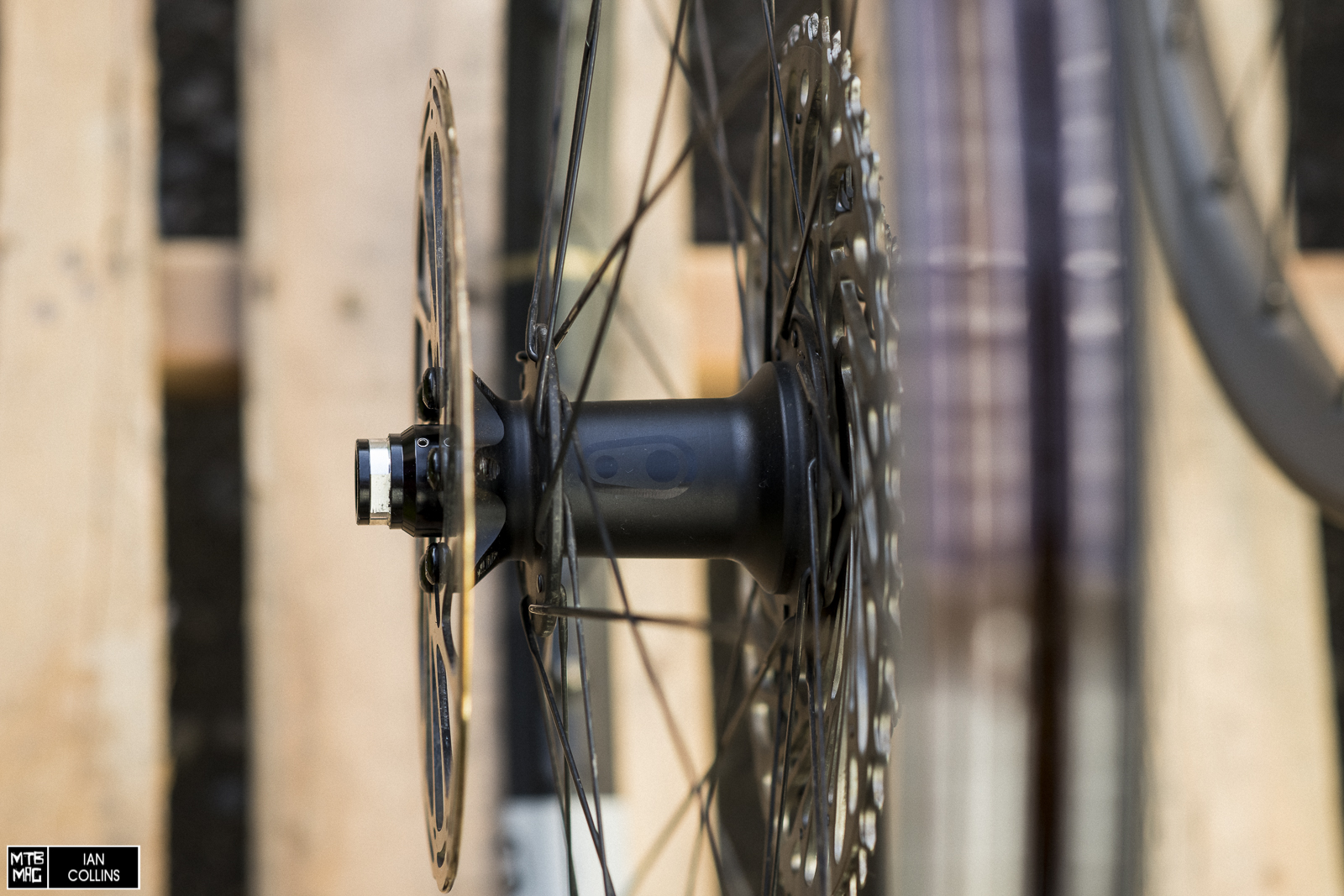 Diving into hub specifics, out back the Project 321 hub has fast engagement, and the lowest drag I’ve ever felt in a bicycle freehub driver. The hub’s quiet nature is due to its magnetic pawls that retract away (and thus drag less) and its increased oil volume, which is up to 25x more than the average hub. In addition to damping noise, this also means longer life.

Coming off of a set of Roval Traverse Carbons, which I think are a great overall wheelset with good vibration damping properties, I did notice an improvement with the Synthesis E11 wheels. As with most testing, it may take some time to make your discernments after you first swap out the part(s) in question. Disparities generally make themselves more apparent when you switch back – in this case, on the Stumpjumper, after switching back to them, the Rovals felt a bit rough and pingy. The contrast was even more stark when going back and forth between the Synthesis and a set of Enve M730 wheels on my Evil Offering. So, what did this mean on trail? True to claim, I felt the most relief up front – which makes sense as it’s tuned that way intentionally, with narrower and fewer spokes and a thinner, but wider and more compliant rim. This detuned approach didn’t result in a front wheel handled poorly, but rather, it absorbed chatter than anything I’ve ridden to date, while also deflecting substantially less. With that in mind, I have yet to ride the new Zipps. 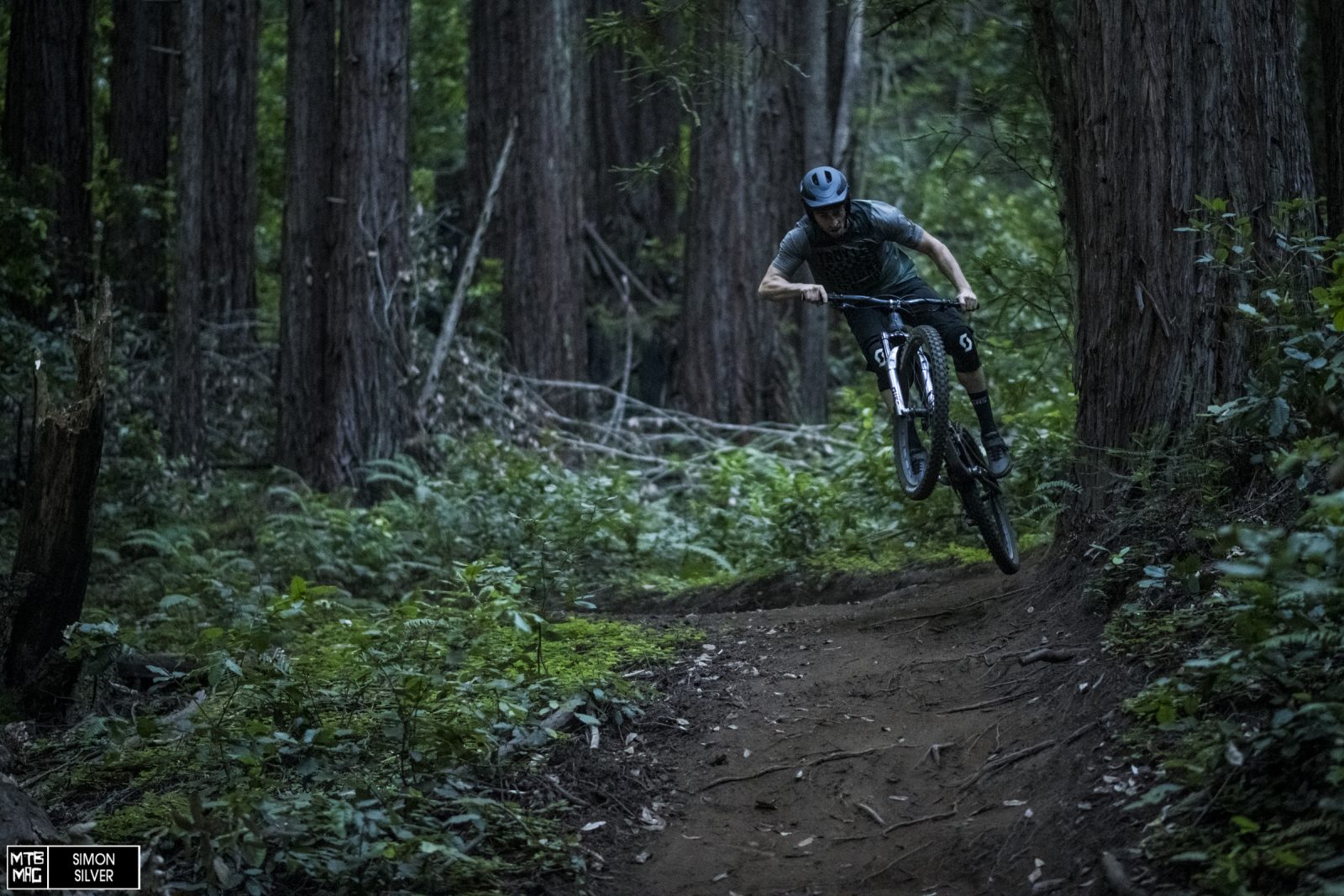 Again true to claim, out back, the rear wheel had a noticeably different on-trail feel compared to its mate up front. The additional spokes and materials resulted in a clearly stiffer back end. With that in mind, I’ve ridden carbon wheels that are stiffer side to side, but they were also less forgiving. Throughout the entire test duration, I did not use tire inserts on these particular wheels, nor did I flat (I rarely do regardless). I did however have a few hard, audible dings – the kind that make you stop, get off the bike and check to see if you cracked your rim. None such cracks occurred.  Speaking on rim profile, the concept of varied front and rear dimensions most certainly makes sense on paper. I’d be lying if I claimed to feel a perceptible advantage on trail in terms of the difference in tire footprint that a few millimeters makes. With that in mind, the idea of having a subtle difference in tire profile encouraged by the rims’ unique widths is logically sound – many World Cup DH racers run wider front rims and narrower rears. Another variable is that the sides of the rim are thicker out back, where you’ll inevitably feel harsher rim-to-object strikes and bottom outs and be more apt to fatally damage your rim, so the added material is more than welcome. While no major damage occurred to either rim, this approach is also logically sound and although it surely adds to the costs, it really is a brilliant, unique approach. 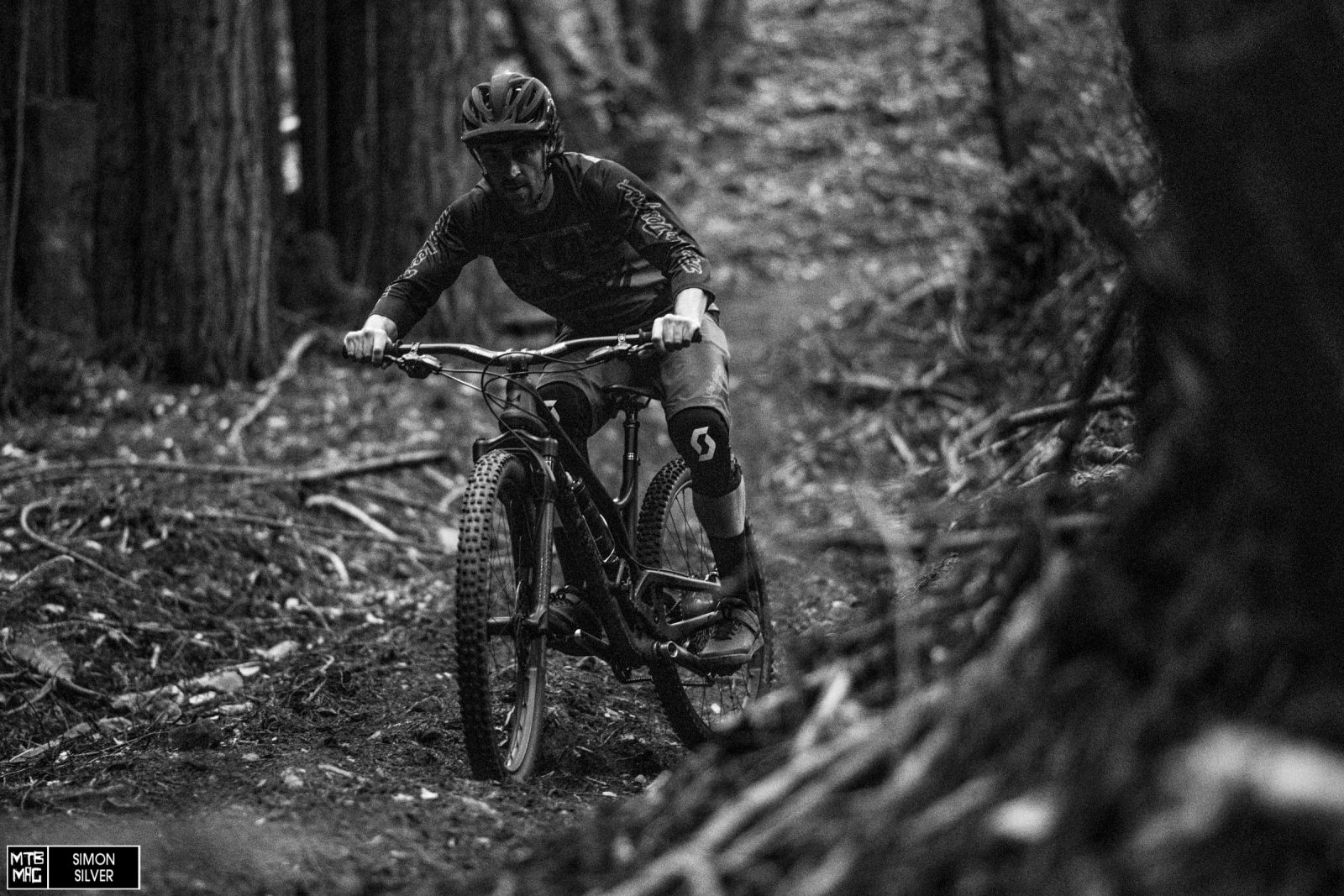 Speaking on the hubs, I really got along with the Project 321’s. Rumor has it that crankbrothers may be moving away from them as keeping up with demand is difficult. In which case, I have little firsthand knowledge of the I9 Hydra hubs, but do hear good things. Back to P321 – from day one, both the front and rear bearings exhibited noticeably less drag than most hubs I’ve ridden over the years. The rear hub has not seen a single tear down yet, but it’s working as seamlessly as it did on day one after a year of use. That alone is very impressive, but outside of durability and low maintenance, the ride quality is also beyond praiseworthy. As mentioned earlier, the magnetic pawls were not only quieter than the average hub, but they also had substantially less drag in the drive mechanism when coasting. You can read up on a great deal of things that make this drive system unique here, but the main factor in their low drag is that the magnetic pawls retract away from the teeth rather than find themselves pushed against them by springs, while coasting as they would be in a normal hub. There is also the increased oil volume, created by literal holes in the hub, which dampen noise and keeps things running smooth. Lastly, the 2.5º engagement is plenty fast, meaning speedy power transfer out of awkward turns, and improved climbing on difficult technical sections.

This is where value comes into play and $2,399 for a set of wheels hits the wallet on the harder end of the scale, even in the world of carbon fiber mountain bike wheels. It’s a tough pill to swallow as prices are trending downward, but to date the Synthesis E11 wheelset has the best on trail ride quality that I’ve felt. Crankbrothers absolutely succeeded in their approach of looking at each individual wheel as a separate entities in a larger, complete system and designing the individual wheels around the specific dynamics that they’ll be dealing with on trail. At the end of the day, from a high performance standpoint there is quite literally nothing to pick apart on these wheels. As a personal note, for some unexplainable reason, bladed spokes make me cringe, but that didn’t raise cause to criticize any performance attribute – it’s just personal nitpicking. So, if you’re up for spending the money, crankbrothers do back up the price confidently with a lifetime warranty on the rim (2 year on hubs), which makes it a bit easier to swallow.