The world of tire inserts seems to be ever expanding lately, and in the last few months I’ve been spending some time on one of the more obscure offerings – at least here in the States they’re uncommon anyway. They’re made by Effetto Mariposa, who hail from Lugano, Switzerland but ship their products globally. The brand makes a very broad assortment of products ranging from simple things like rim tape and sealant to sneaky solution bits such as grip end caps that have hidden tire plugs built into them. They even sell hack saw blades for cutting carbon fiber and high end torque wrenches. The point being, Effetto Mariposa has quite a few projects going. Anyhow – here’s what we thought of their “Tyreinvader” tire inserts. 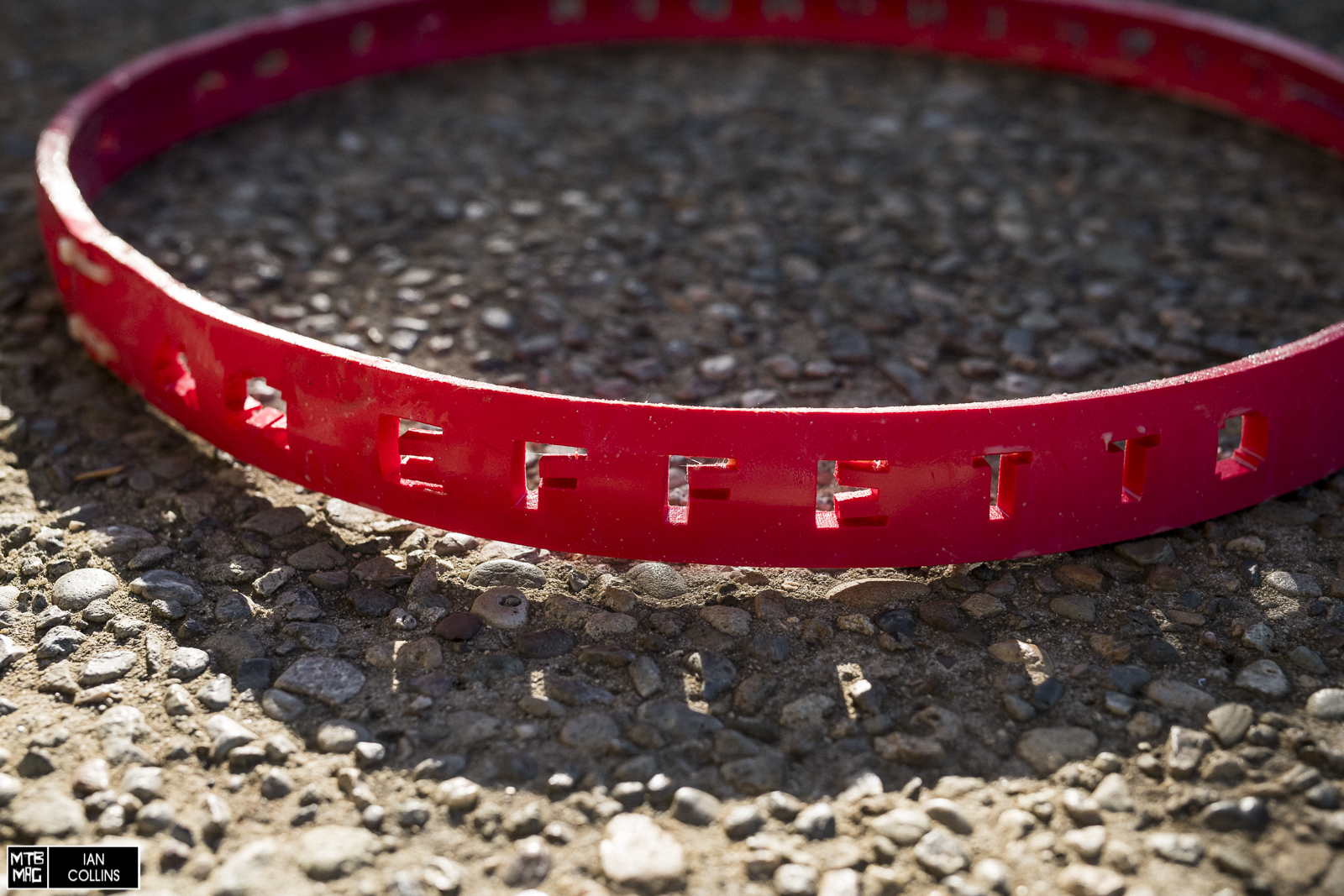 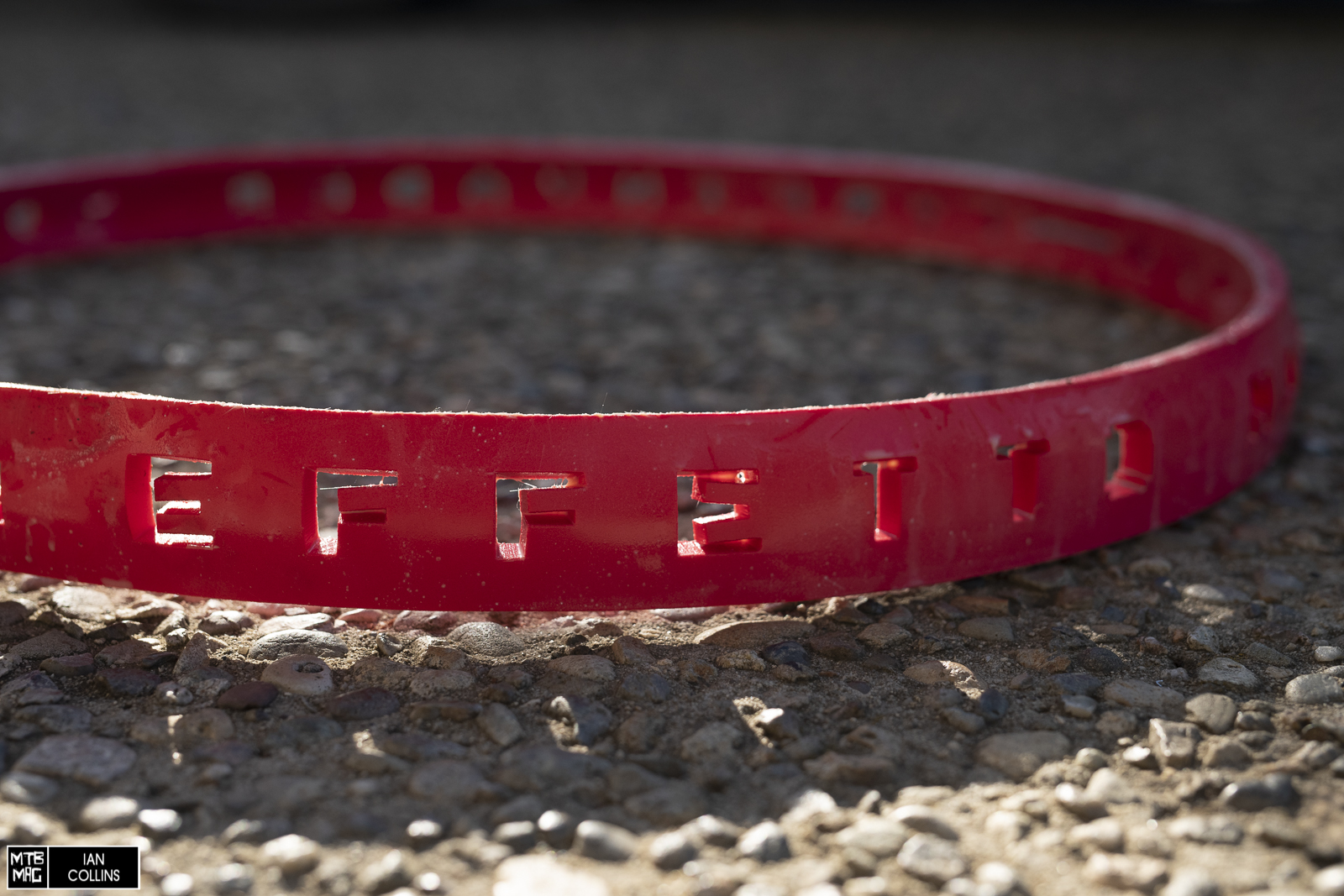 If you’re wondering what’s up with all of the cut outs – some of which are simple branding, some are indicators and some are silly video game inspired aliens – they actually do serve a purpose. According to Effetto Mariposa, the holes in the insert allow sealant to move about inside of the tire more freely, which means it will be more likely to be able to do its job of sealing a puncture, despite the presence of the insert. 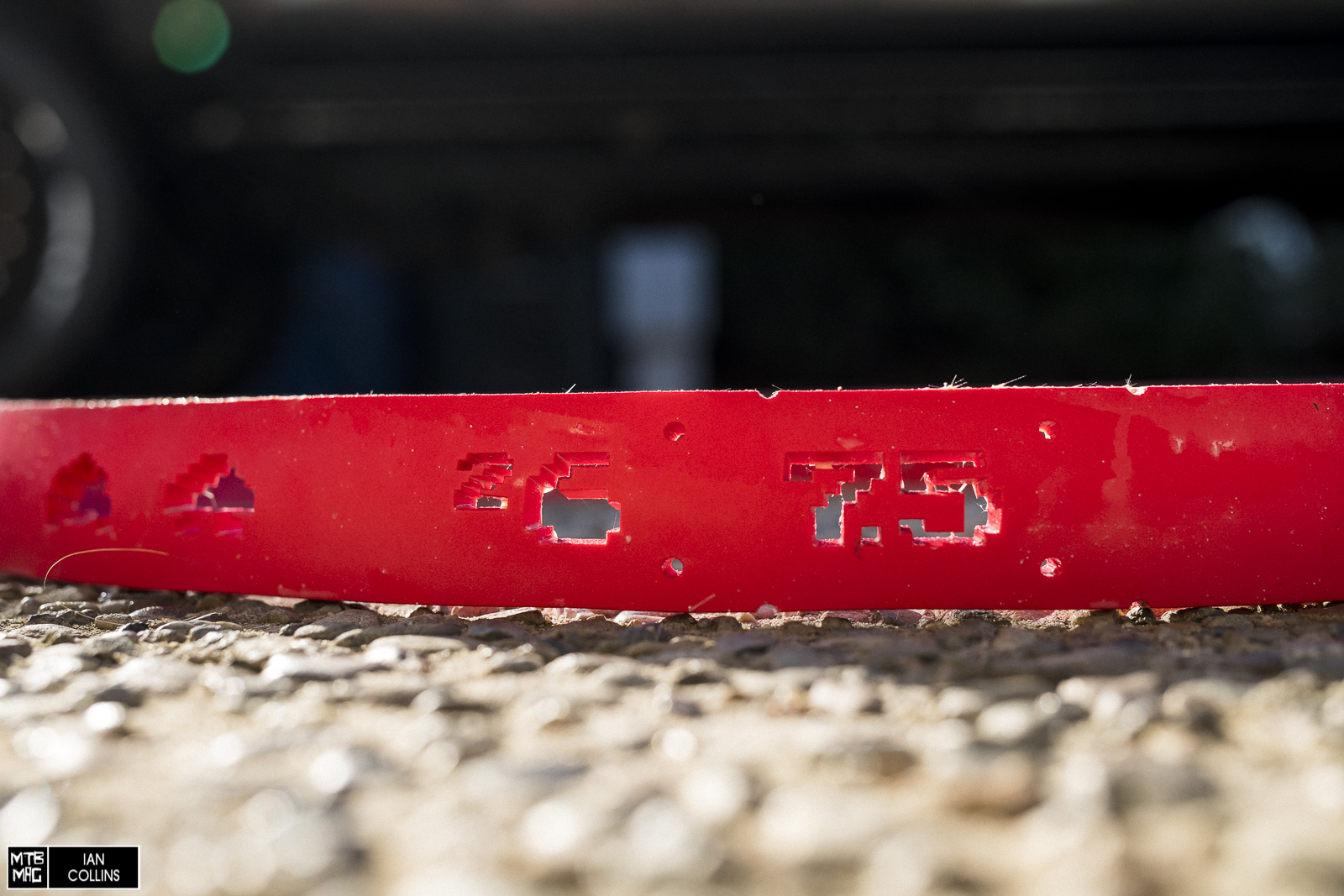 There are very clear indicators for where you’d cut for 26″ and 27.5″ applications and multiple holes that line up for the zip ties which connect the two ends. 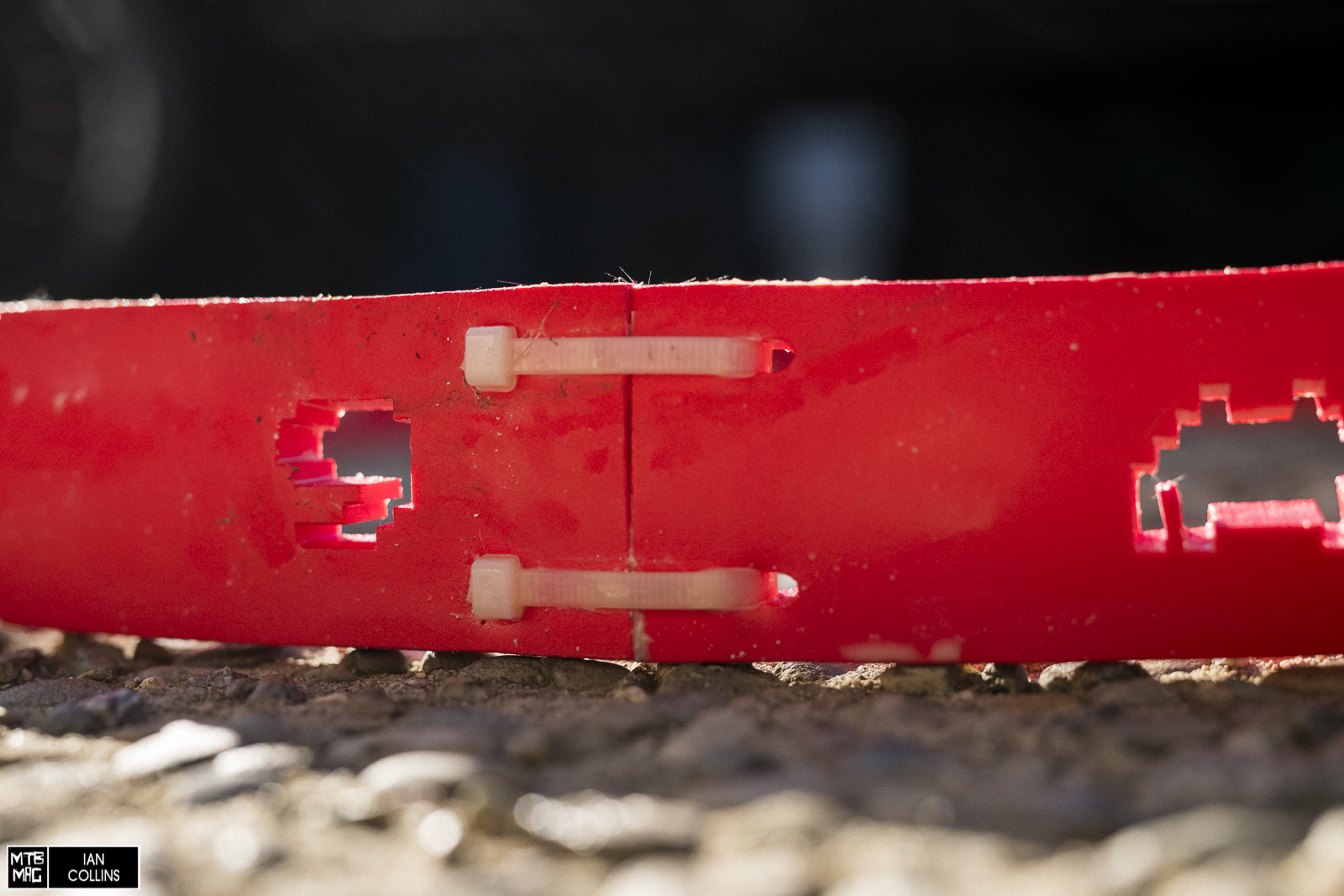 Since we tested the Tyreinvaders on 29″ wheels, no cutting was needed. Regardless, this part of the setup is pretty easy – simply connect the two ends of the insert and cinch them together with the included zip ties. 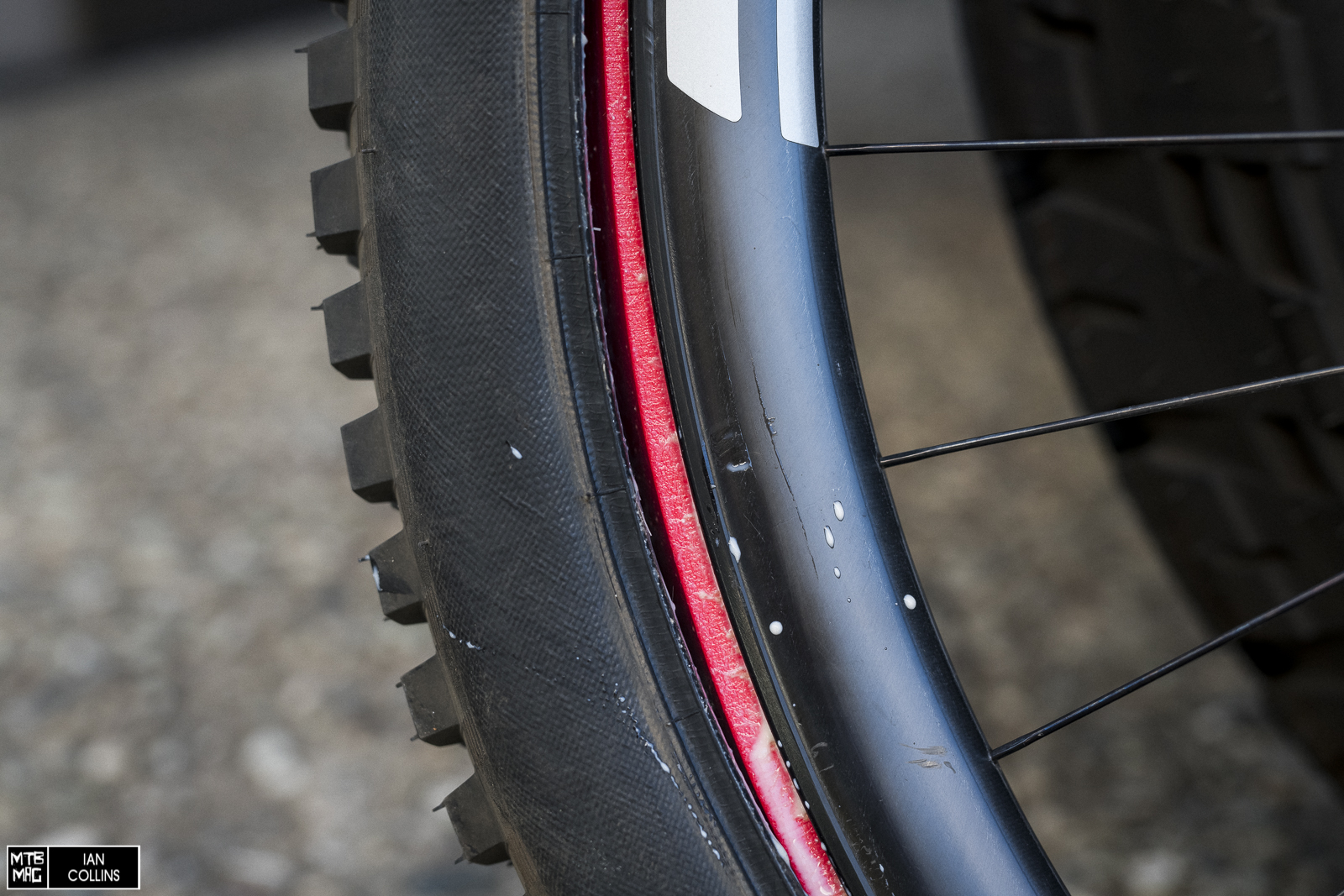 The installation was fairly straightforward as far as tire inserts go. I started by putting one tire bead completely on, then tried to work it up and out of the drop center, to make additional room. The one difficult part of the equation is that the insert doesn’t want to bend down the middle, so it has a tendency to leave you chasing your tail…As you roll one part of the bead into the rim channel, the insert helps chase another part out on the opposite end. This was partly my fault for installing the sealant prematurely. It likely would have been easier to install everything dry, then inject the sealant in through the valve.

Out on the trail, I found that the feel of the Tyreinvaders was more subdued compared to Cushcores and even the new Cushcore XC inserts that I’ve tried as of late. This does make sense as they are lower in profile. For testing, I used middle of the road casings that came in around the 1000 gram mark. In previous tests with higher volume inserts I noticed that with thinner ~850 gram tires, you could really feel the insert, but not so much with ~1150 gram tires due to their thicker stiffer sidewalls. In any case, the Tyreinvaders rarely made their presence felt – it was only in those “oh shit!” moments when you really bang your rim on a rock or root that you could feel them take the edge off. In the corners, they didn’t seem to do much to affect the ride – I’m sure to a small extent they might provide some additional support, but it wasn’t anything that I could feel personally. One nice aspect of the Tyreinvaders was their low weight – this meant that on the climbs I barely noticed the extra weight. After a few months of use, I cracked open the tires and noticed that the foam was as light as ever. The fact that the closed cell foam didn’t take on any fluid also helped keep the weight down. There was one odd thing though…when I pulled the inserts and my tires off the rim, a small, thin section of foam was stuck to the inside of my tire and ripped off. It’s a small matter but worth noting. For what it’s worth, I was using Stan’s “Race” Sealant, perhaps Effetto Mariposa’s own sealant would play nicer with their own inserts.

At the end of the day I’d rate the Tyreinvaders as the minimalist’s inserts. They’re lightweight, but fairly effective and don’t change your bike’s ride too dramatically. At around half the cost of the average inserts, the price is very good and they offer a nice range of sizes and widths for every wheel size and rim width respectively. While I wouldn’t rate them as a “stop flats at all costs” security measure, they do act as a nice buffer for minimizing flats and protecting your rims to a modest degree without adding too much weight or throwing off your bike’s feel. All in all a great product that’s worth considering if you’re in the market for inserts…especially if you’re on a budget – after all, you won’t even need new valves.