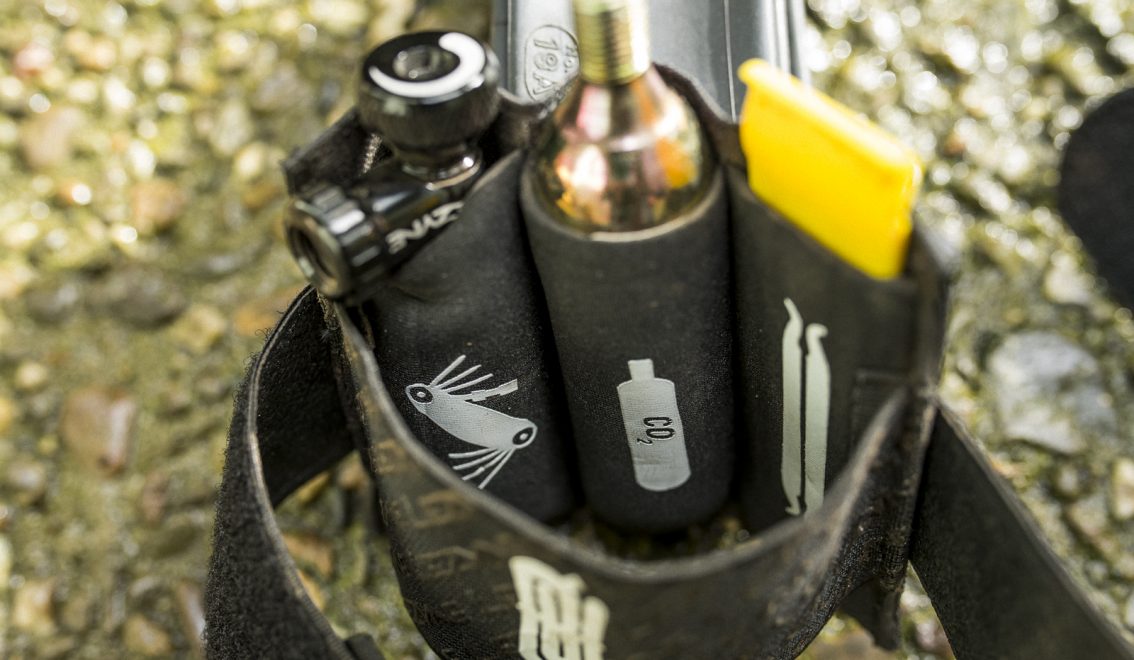 A couple of years ago, Dynaplug seemed to be the only tubeless tire plug option on the market, but since then a handful of others joined onto the scene. Also a few years ago, riders were using very crude Jandd straps to fasten a spare tube to their bikes, but now there are options galore. Recently Lezyne sent out a couple of new bits for us to test. To stash a handful of necessities on bike, they now have the Sendit Caddy, and for an all in one plug kit/inflator, they rolled out the Tubeless CO2 Blaster just after Sea Otter. Read on for some thoughts on the combo. 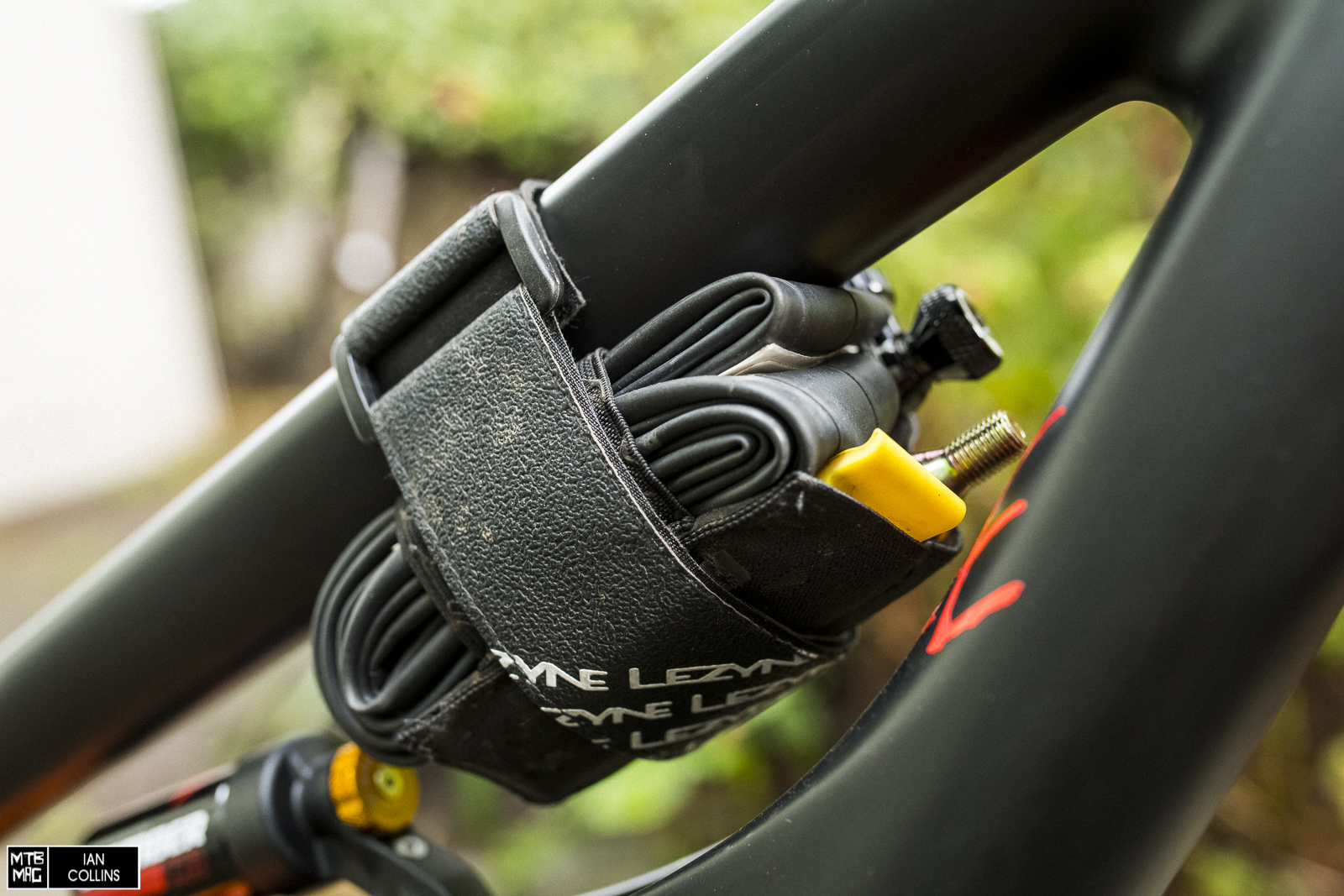 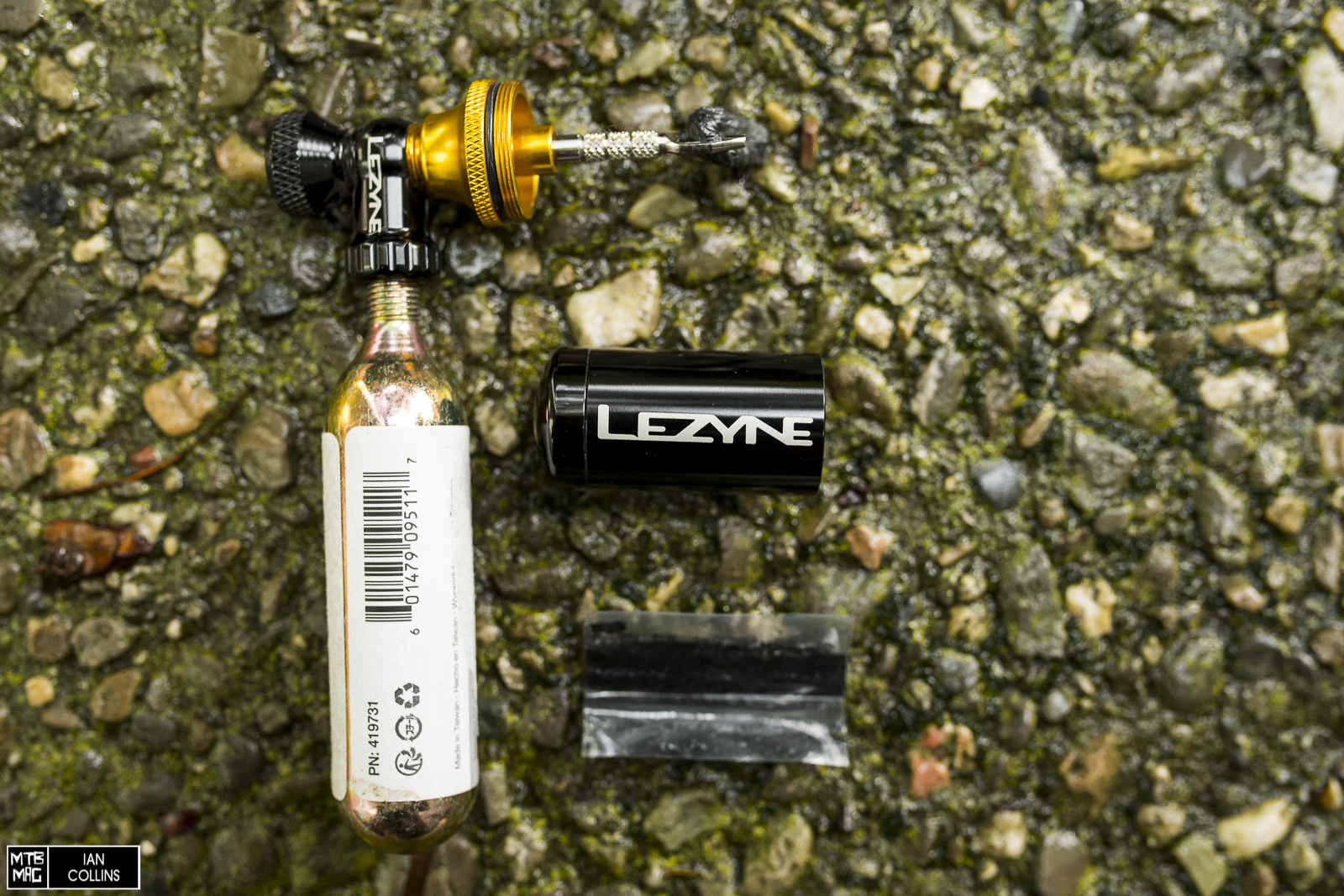 Through a really smart design, Lezyne managed to squeeze quite a few features into an all-in-one setup. The black canister houses 5 spare plugs and covers the awl so it doesn’t stab anything that it’s not supposed to. The inflator has a dial, so you can modulate how you exhaust the CO2. 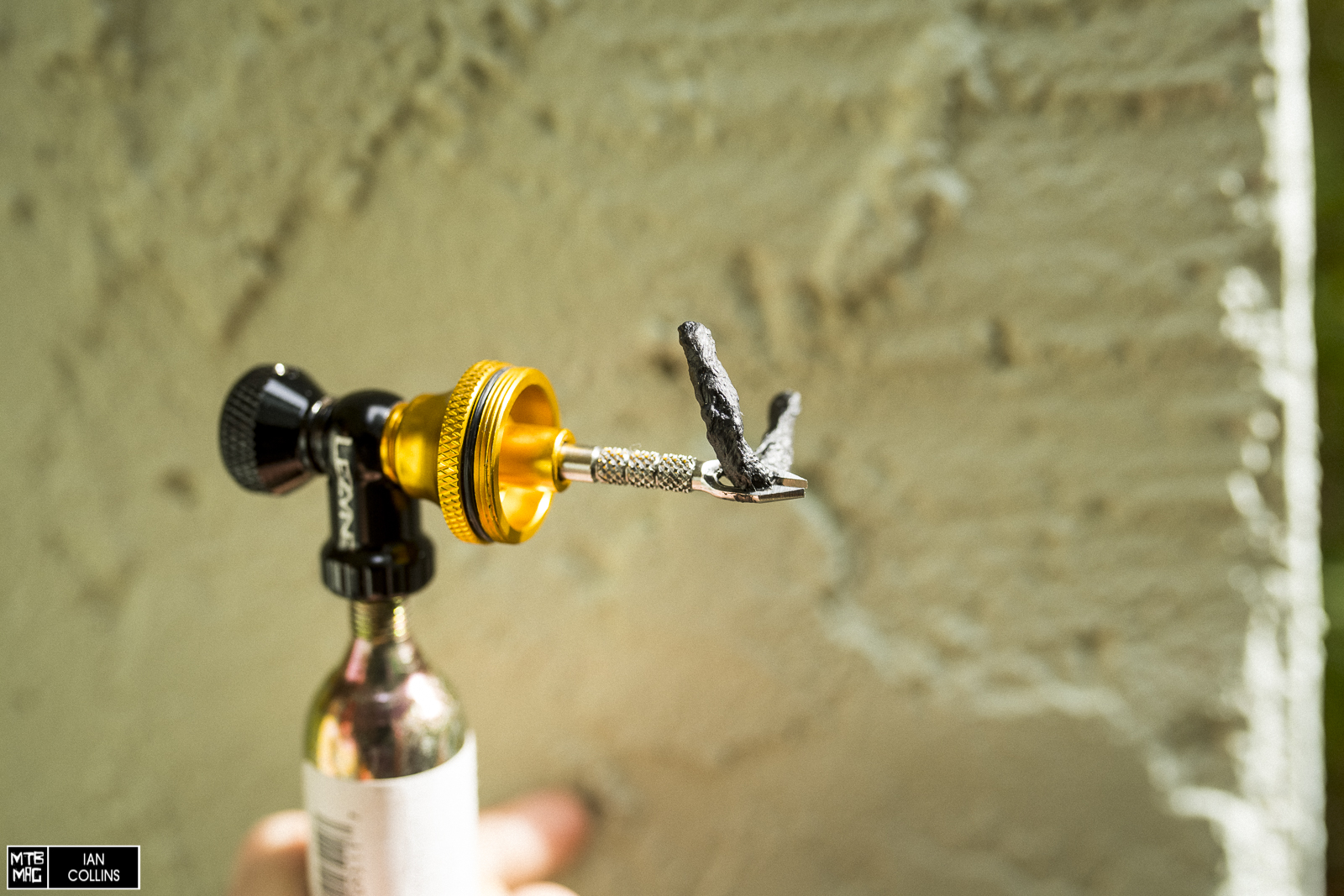 The tip is tapered so that even if you’re penetrating a small hole, it won’t be too difficult. There is also some knurling behind it so you can rough up your tire and get better adhesion with the plug.

There is a stretchy section that houses the tube, with grippy silicone lettering to prevent slippage on your frame. The strap itself is rubberized with tough, no-slip material. 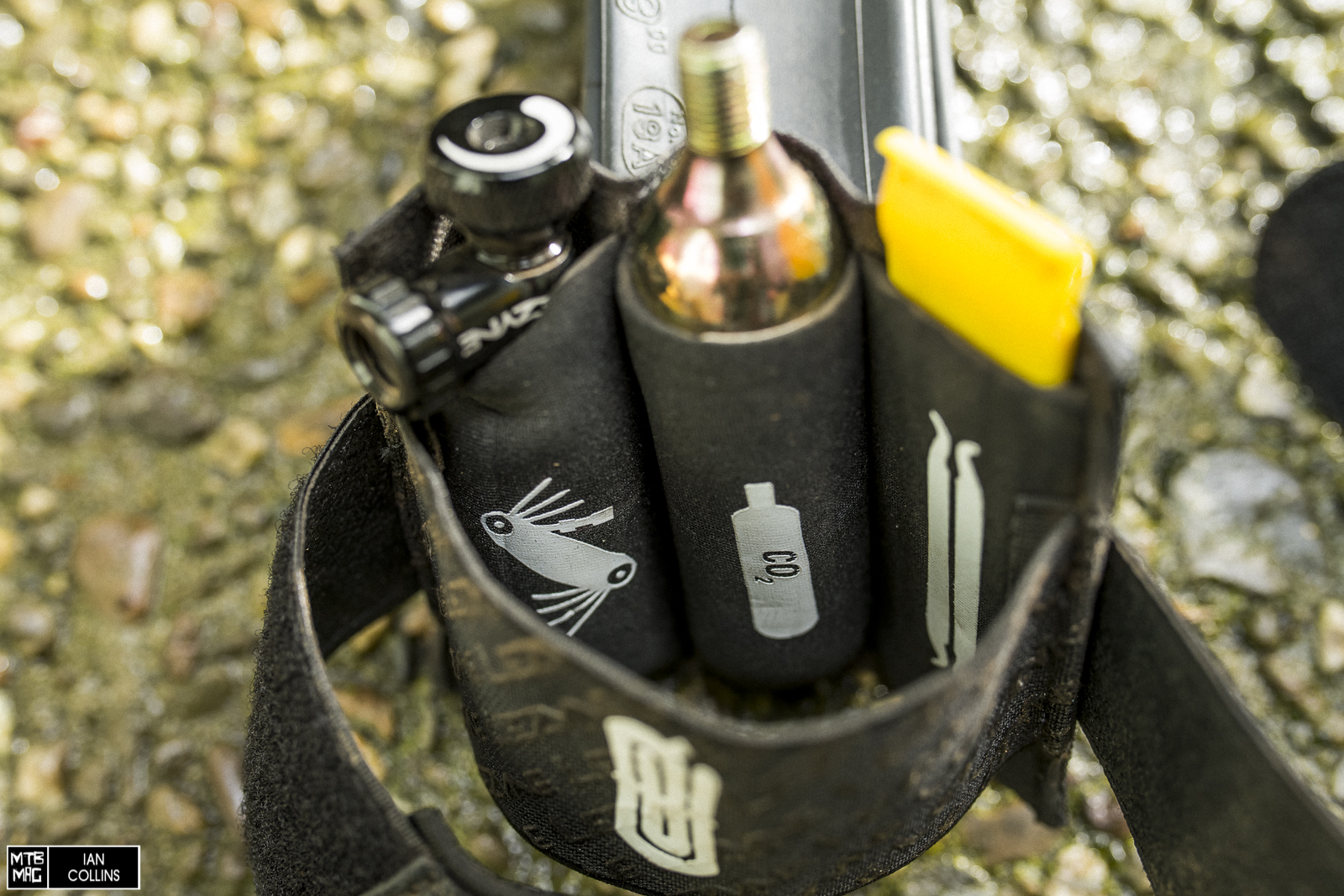 Three neoprene pouches are labelled for various items. Since I have a SWAT tool in my steerer tube, I figured the Blaster was a great placeholder for the multi tool pouch. Either way – having separate, padded partitions is really nice so you’re never worried about dumping your stuff out while you’re already frustrated by a flat tire.

Coming from the surf world, I’m well familiar with neoprene, and was happy to see it used in this application as it helps with both padding and ensuring a snug fit at the same time. I’ve used a handful of tube straps at this point – some are easier on frames than others, and some stay put better than others. Lezyne did their homework with the Sendit Caddy as it both protects the frame and stays nicely fixed. The large rubberized strap made it easy to harp on, even with wet or sweaty hands and nothing was clanking together since everything is nicely separated. 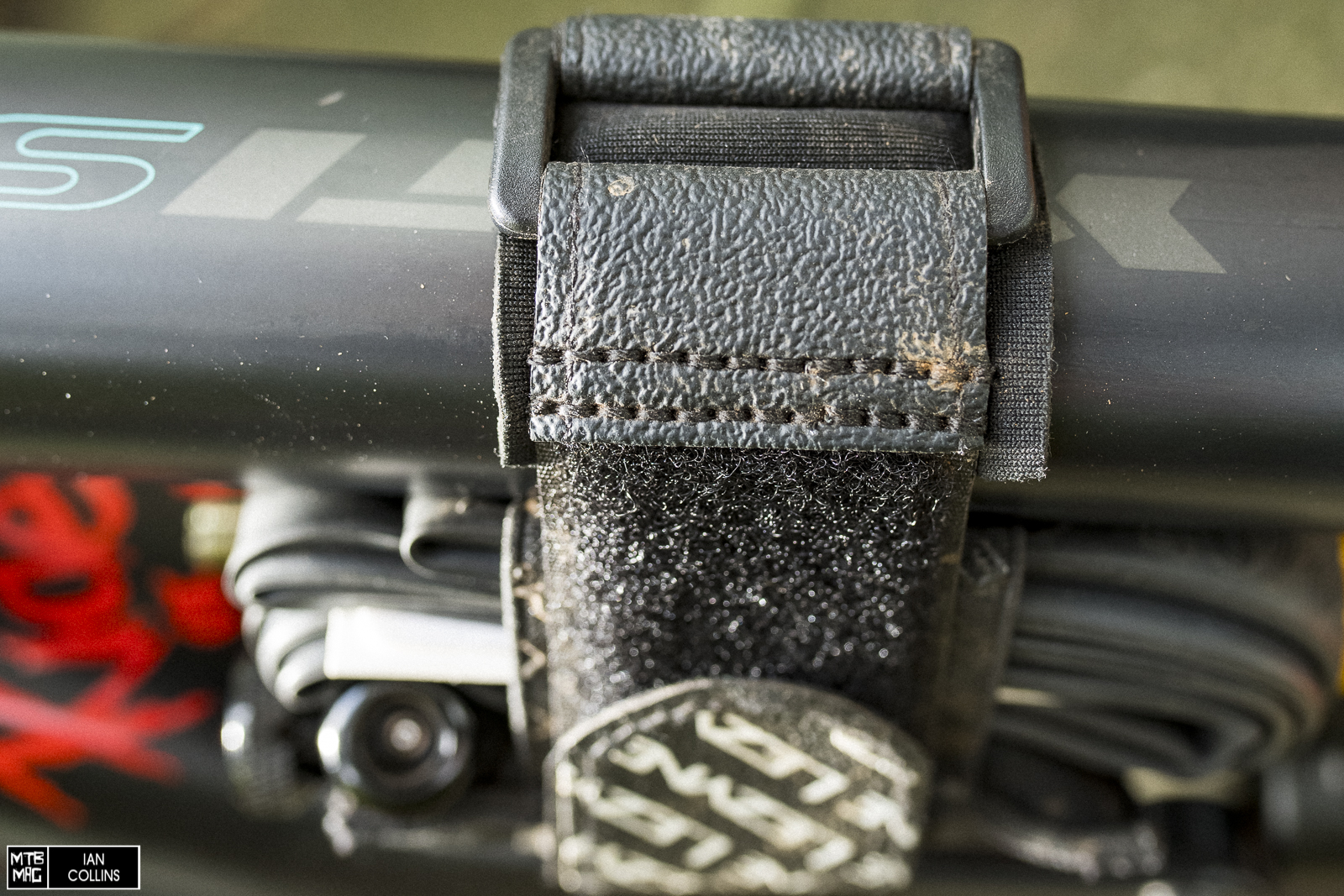 As for the Tubeless CO2 Blaster, it limits the number of independent bits that you need to carry and keeps things organized as all of your tire plugging and inflating related stuff is in one place. The time span that I’ve spent testing this plug kit was not during my once every year or two flat tire timeframe. But…I got bored and stabbed a worn out tire to test it. While the whole thing works really really brilliantly, my favorite feature is illustrated in the photo below…. 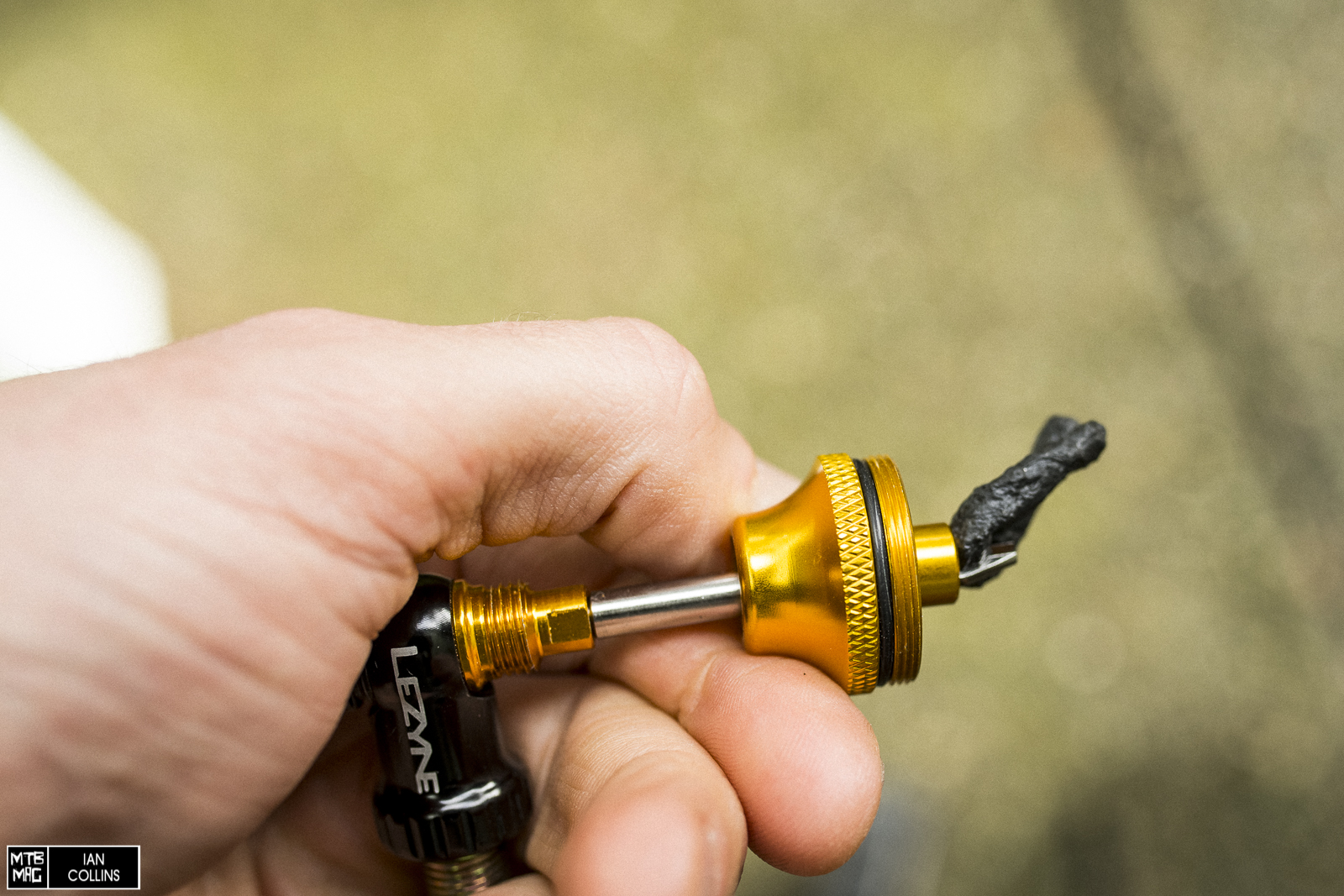 Once you jab your tire with the plug and re-inflate it, you unscrew the cone shaped gold bit and slide it down over the puncture. You then use it to hold the plug down on the tire and yank the punch out. The punch has a gap in it so that with a little wiggling, the plug can slide right through. This made it quite easy to use and while it’s a bit hard to tell from one test usage, that cone certainly seemed like it made it easier to mitigate any lost air pressure.

At the end of the day these are a couple of very nicely thought out bits from Lezyne. At ~$50, the inflator seems a little pricey, but keep in mind, it’s an inflator, a brilliantly thought out plug kit (that works better than most any other minimalist combo options) and tidy storage for spare plugs. As for the Sendit Caddy, I like it better than anything else I’ve tried to date including the Backcountry Mutherload and the Dakine Hot Laps. If you’re having a look around, check out some of Lezyne’s other sneaky storage options at the link below. You won’t be sorry.