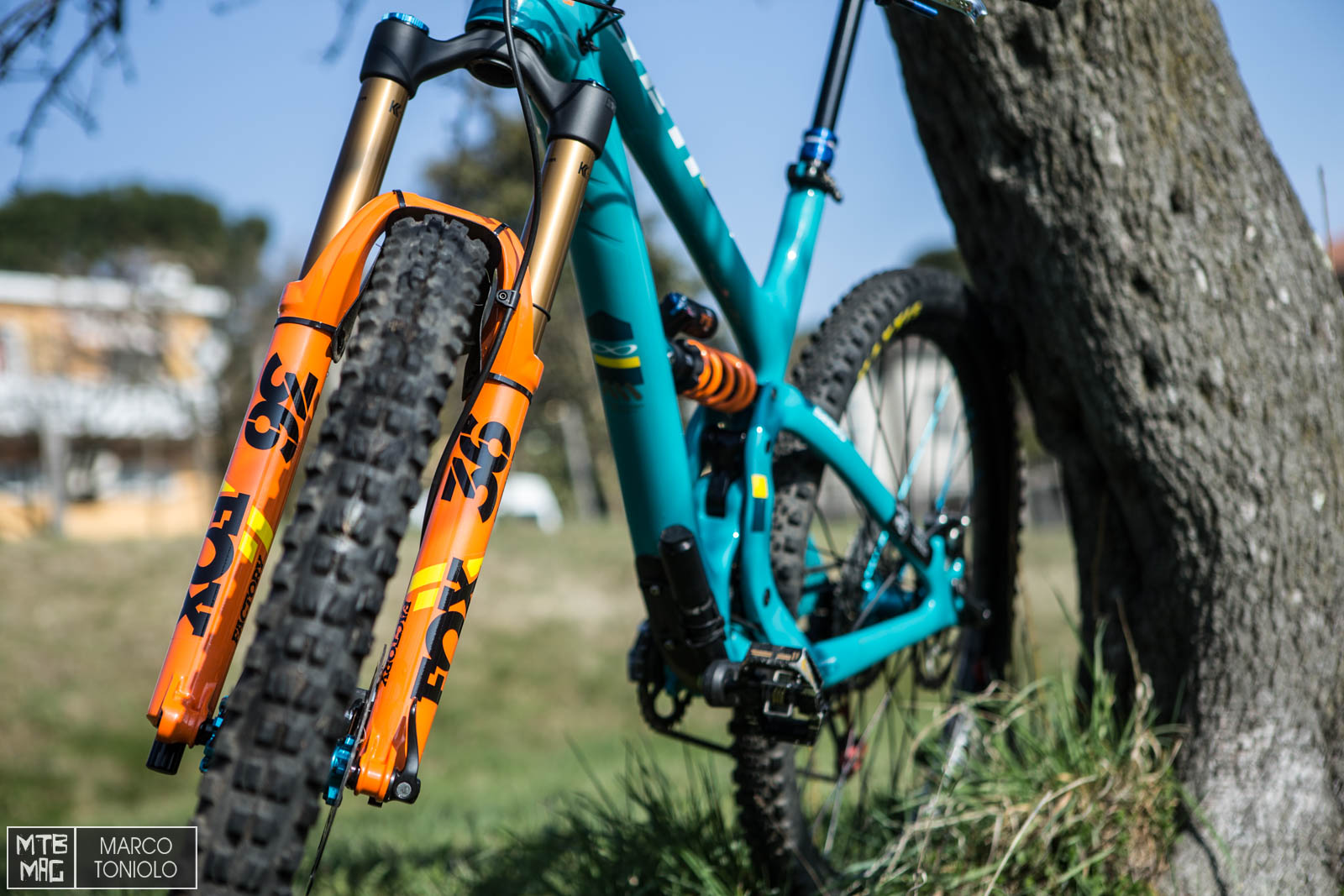 Today Fox is releasing the new 36 with their Grip2 cartridge. We can already provide you with a fair amount of the key details and a mid term review, since we’ve been riding this fork for the last two months on our Yeti SB 5.5, which we use for long term test tests, on our home trails. 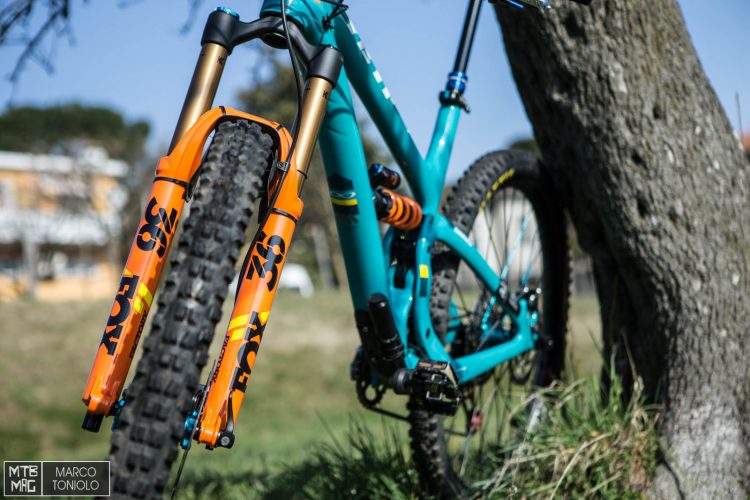 From the outside the new 36 looks exactly like the previous model, but inside it is completely new. The new Grip2 cartridge, which is shown below, features a Fox patented rebound control called Variable Valve Control. It adjusts valve stiffness instead of increasing the pre-load, which typically happens when regulating the rebound. 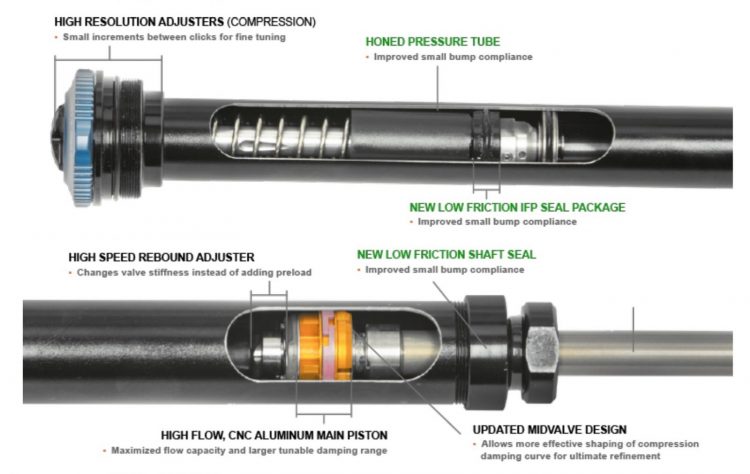 Fox separated the high-speed and low-speed rebound control, which can be adjusted using the knob at the end of the lower leg assembly, which has two rings. In the picture below, they’re red and have different diameters. 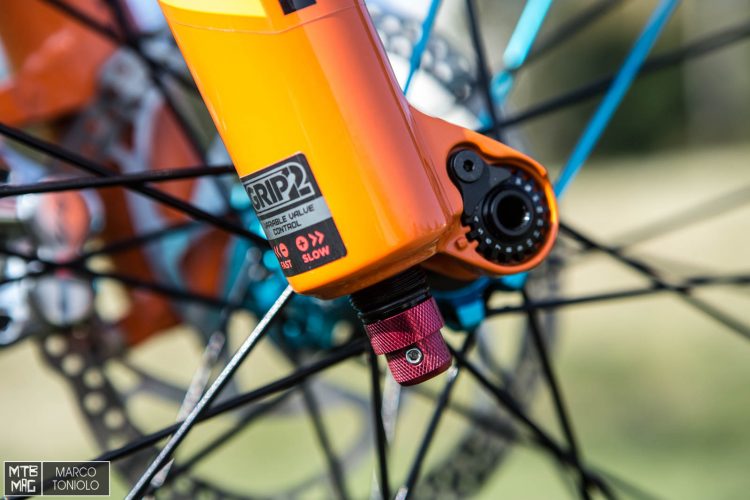 Like the 2017 model, high-speed and low-speed compression tuning is set using the knobs on top of the right stanchion. 16 clicks for high-speed and 12 for low-speed. There is less inner friction, though, thanks to the new seals. 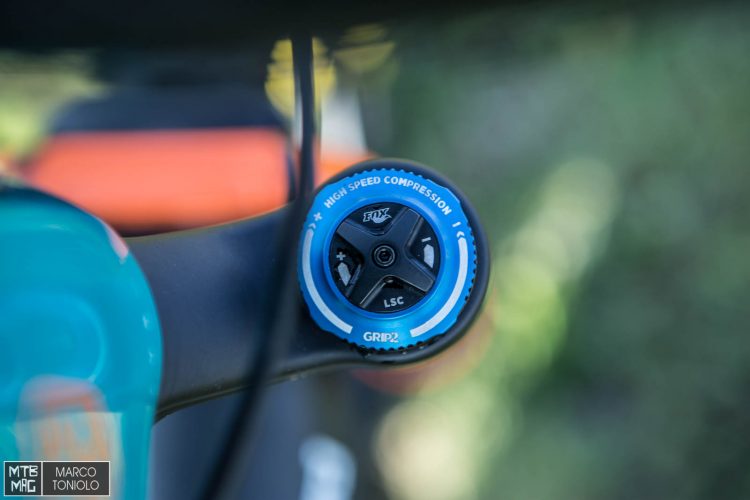 The air spring features a bigger negative chamber, called Evol, already in use on the previous model, which provides a more linear behaviour through the first 25% of travel and better small bump absorption. 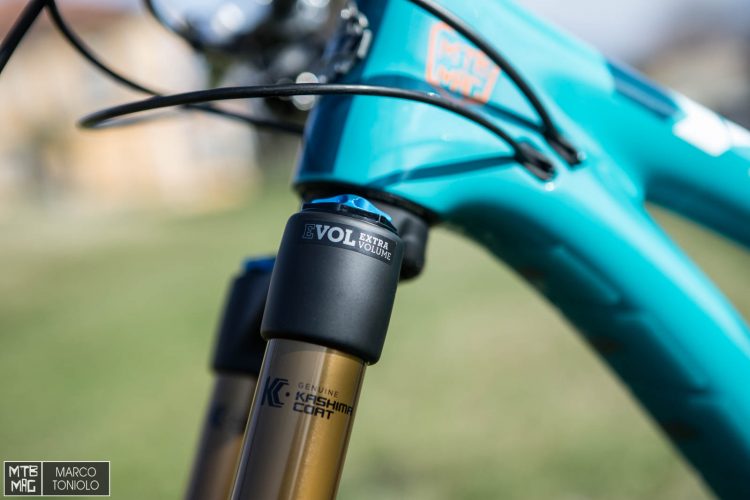 Positive and Negative air chambers are automatically equalized by the Float system, used by Fox since 1999.

In the picture above, a spacer reduces the volume of the positive air chamber. In the tested fork, 1 spacer is provided, and a maximum of 5 can be added. The procedure is easy with a specific tool to remove the top cap.

Below is the chart showing the number of spacers you find on the various 36. 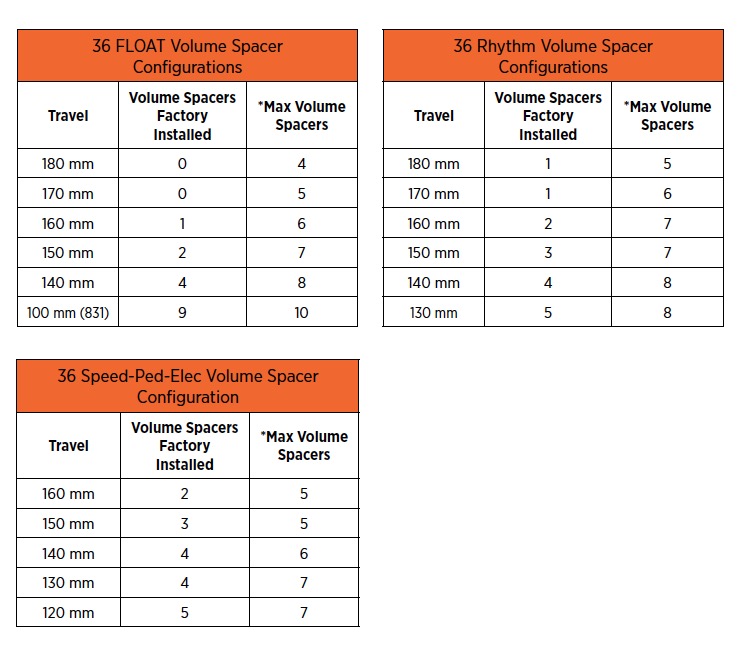 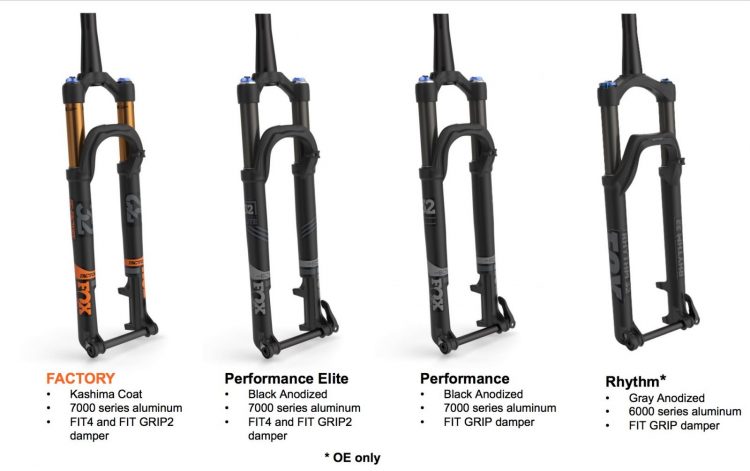 We tested the 36 Grip2 Factory, but it is worth going over the Fox range and explaining what the names mean. In the picture above the 32 range is shown, but it is the same with the 34 and 36: on the left there’s the flagship model and on the far right the entry level model, the Rhythm, which is installed only as OEM. The new Grip2 cartridge is available also on the Performance Elite, so Kashima stanchions alone may not make such a big difference. As we like to stress in our articles, the Performance line has almost the same characteristics of the Factory and offers great performances (sorry for the repetition) at a more affordable price.

Let’s get to the point: how does the new 36 behave? I was lucky enough to test all of the new 36 forks over the past few years, so I can talk about its evolution consciously. I remember the first “new era” 36: it was 2014 and Fox basically launched a racing fork on the market: very progressive, solid…and uncomfortable. They chose to give the rider more feedback at the expense of some riding comfort. Well, in comparison, the new 36 is from another planet. I already liked the behaviour of the last year model, not so racing oriented (or brutal, as you could call it). The 2018 model follows this path: smooth, sensitive to small bumps, and with a ton of new adjustments, which are a clear advantage on trail. 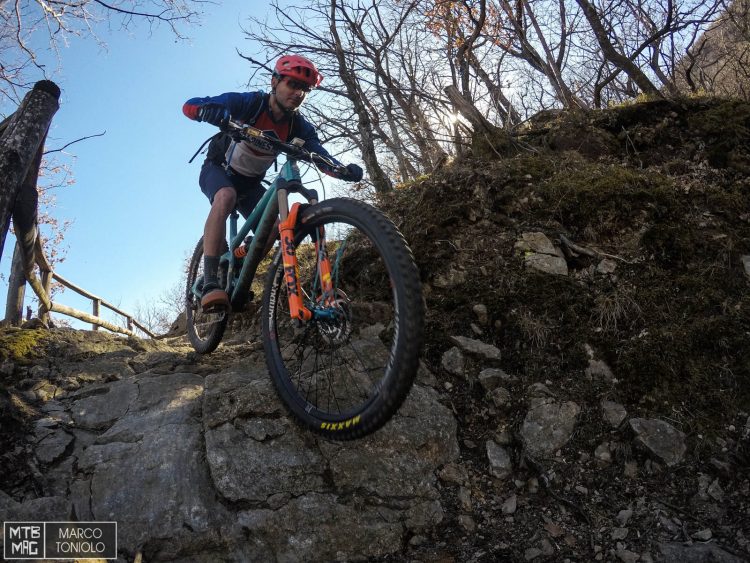 From the very first few meters, you notice its smoothness: it is hard not to think it’s a coil fork (I’m currently trying one from another brand). Fox worked a lot at mid travel: there, the 36 behaves more similar to the first part of travel, that is linear, rather than the traditional Fox progressiveness in the last bit of travel.

This makes the new 36 bump gobbling machine, yet less competitive and race-oriented riders can appreciate it. In other words, the hands don’t hurt at the end of the downhill, or at least they hurt less than with the 2017 model. 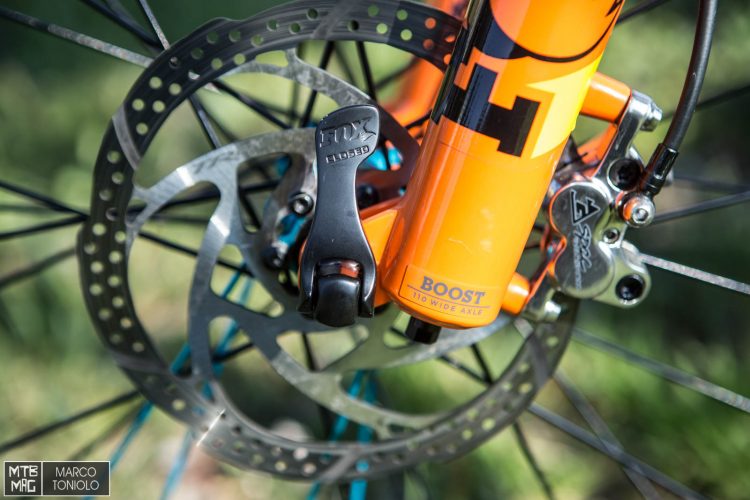 You need to try very hard to bottom out with a 36, with just one spacer in the positive chamber. Anyway, the compression tuning is very effective and can help adjust the bottom outs (via high-speed control). For the record, with both high and low speed closed, the fork is almost locked out. I rode a couple of long climbs on asphalt with this setup, then reset the fork just before the downhill: since I know the test tracks quite well, it is easy to choose the right setup, “flow” (more open hydraulics) or “slow and harsh” (more closed, in particular low-speed), unless you find both on the track. I can’t offer you an all-purpose setup, because I worked a lot on adjusting the compression setting not keeping a single setup in mind, since it is extremely easy to feel the difference from one click to the next. With other brands I have a hard time feeling this difference, but the new 36 has been the easiest to set ever, even on the trail.

I didn’t adjust the rebound that much. High-speed rebound is suitable to big drops when closed (slow), to avoid a possible sudden hit which could unbalance the rider. Usually in winter I don’t find this kind of drops on the trails I ride.

The fork weighs only 2 kilos, which is very good for a 29” with 160mm of travel, which rides very precisely, even under heavy braking. The 2017 model weighed 1,990 grams (27.5” with 170mm of travel), which confirms that Fox didn’t work on the chassis, but rather focused on hydraulics and seals.

The new Fox 36 hit the target. It has a mix of qualities that is difficult to find in just one fork: smoothness, small bump sensitivity, mid travel support, and easy to setup on trail. Regarding the latter point, Fox made a big step forward, thanks to the two separate rebound controls, and the improved high sensitivity of the high and low speed compression tuning.