Today Öhlins is presenting the new RXF34 m.2 fork, which replaces the RXF34 and has been designed for the downcountry segment. Available in 120 or 130mm of travel, the Swedish brand’s newest creation has 34mm stanchions and weighs 1.75kg on our scales with the steerer cut to 19.5cm.

It was sent to us a few weeks ago, which is why I mounted it on the Trek Top Fuel we had on test, a perfect combination. Before getting into its on trail performance, let’s see the details… 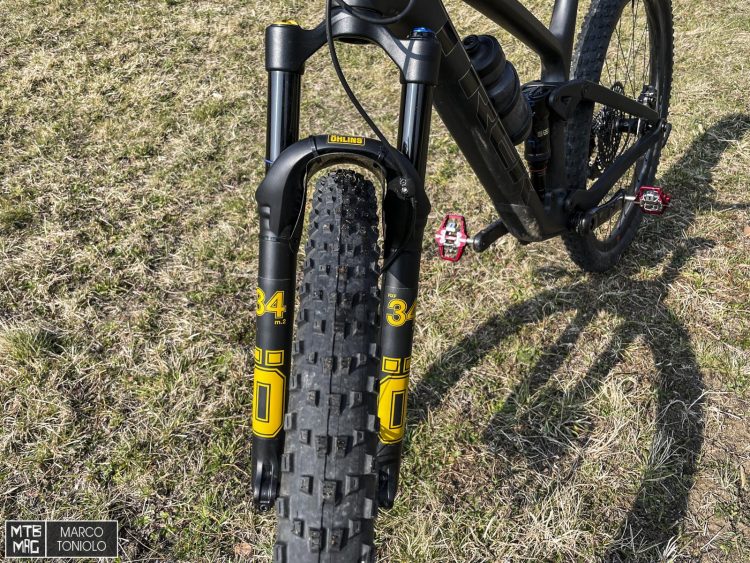 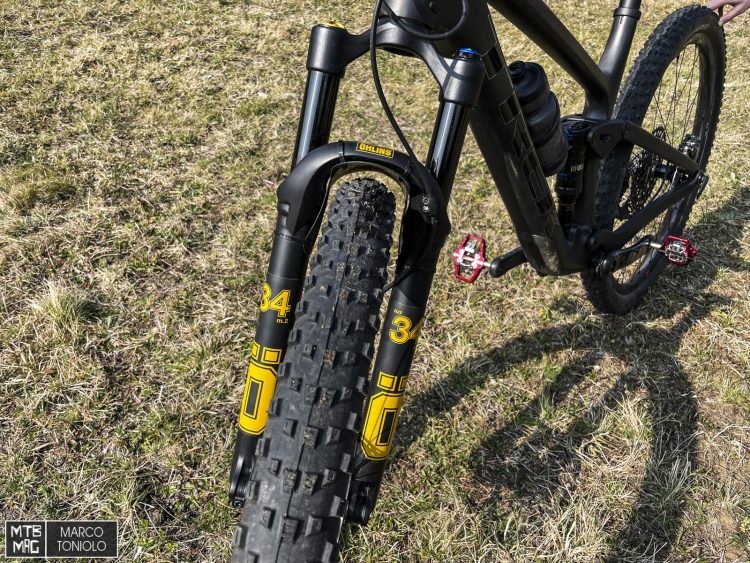 The main novelty lies in the new OTX18 cartridge, born from the TTX18 that Öhlins uses in enduro and DH forks. It weighs about 30% less than its gravity oriented sibling and has been designed to perform well on fast, smooth trails, according to the Swedes.

The air spring has a positive and a negative chamber which are self-balancing. 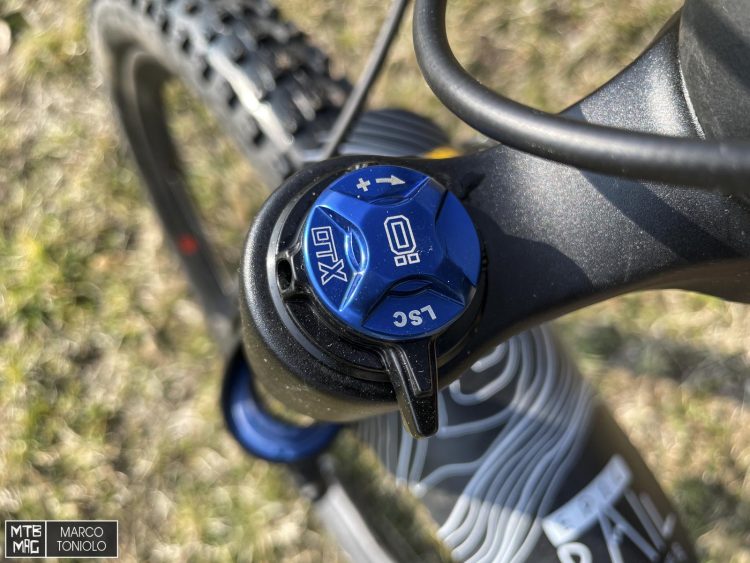 At the top of the left stanchion we find the low speed compression adjustment, distributed over 15 clicks. The black lever you see in the photo above instead has three positions for adjusting the compression at high speeds: fully open, medium, fully closed. A sort of almost complete lock out – when fully closed the fork barely moves, even when one loads it with an off-saddle climbing position. 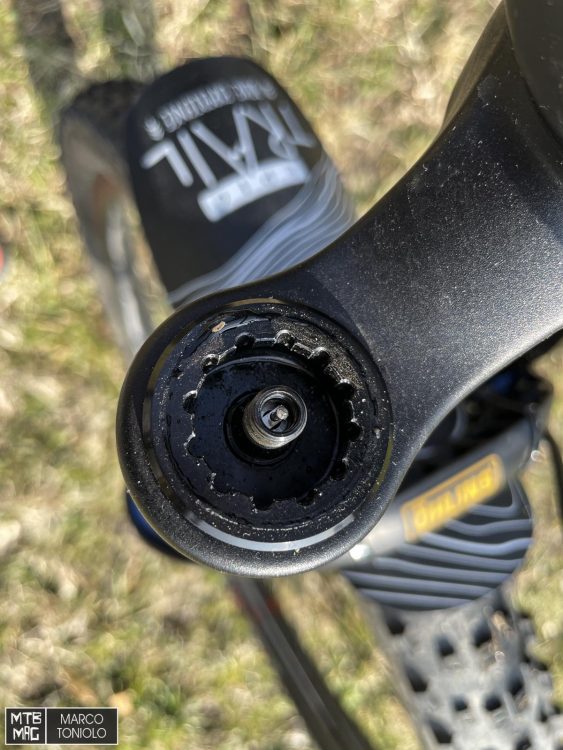 At the top of the right stanchion we find the air pressure valve as well as a ring nut, which can be unscrewed with a cassette key. This gives access to the volume spacers for adjusting the progressivity at the end of the stroke. The 130mm RXF34 m.2 has three factory fitted spacers, the 120mm has two, for a maximum of five. In the package there are 2/3 spacers. 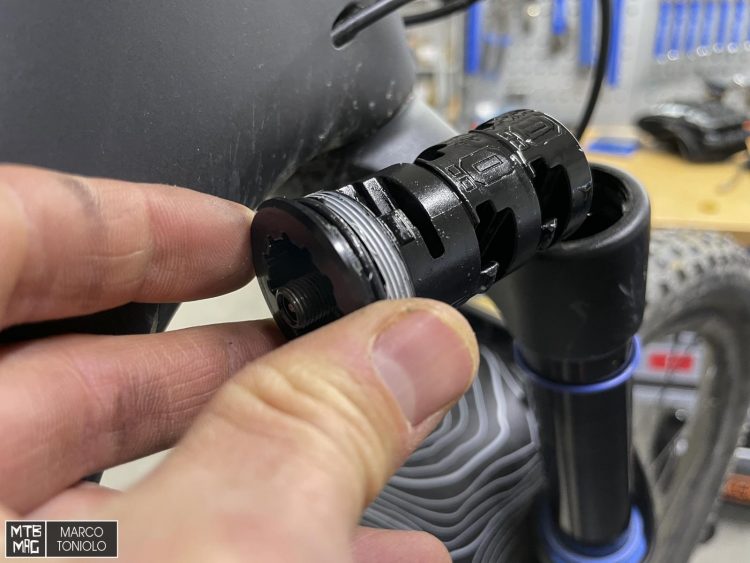 The “floating” thru-axle is interesting, very similar to that of the latest generation of Fox forks. A system designed to center the wheel at its best on the fork and reduce the friction between the two components. 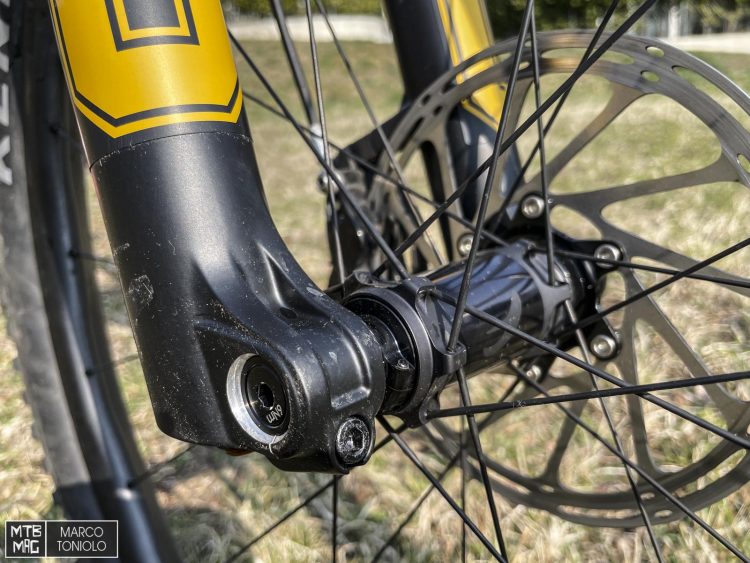 At the bottom of the right stanchion we then find the rebound adjustment with 16 clicks. 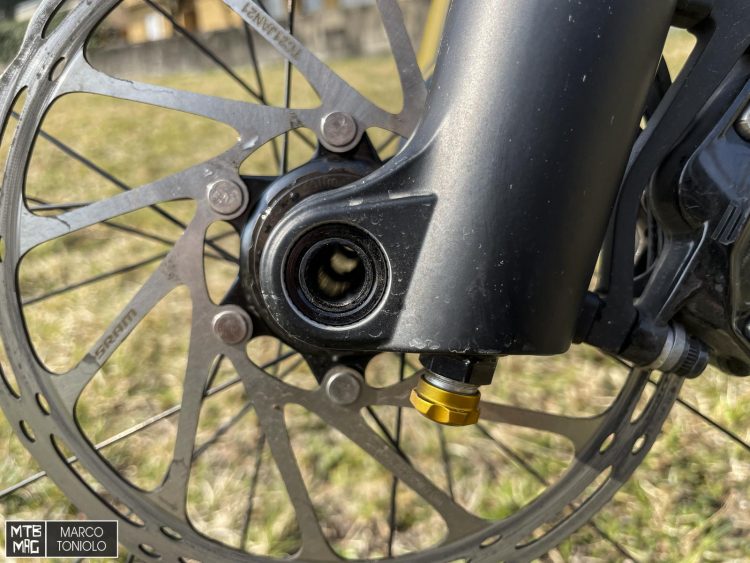 A classic cable routing and yellow decals that make motorcyclists’ hearts beat faster, and not just them. 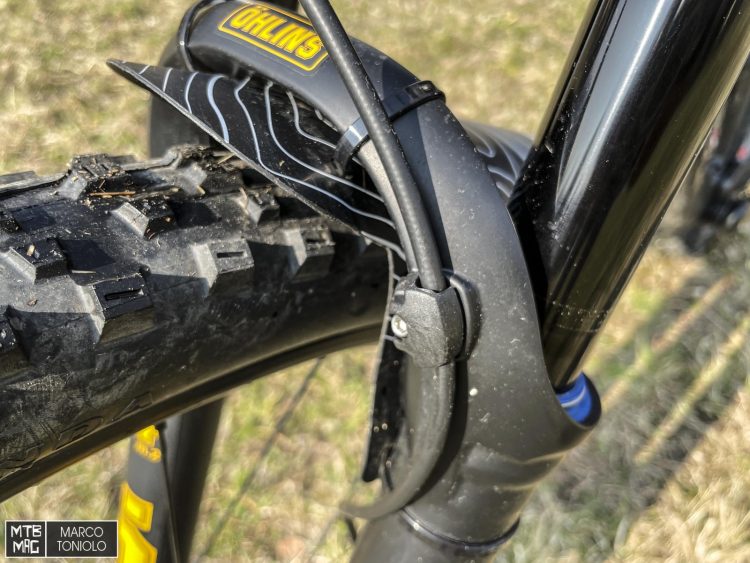 The new RFX34 did not escape the most attentive in the video in which I spoke of the Fulcrum Red Zone Carbon. Despite having pixelated it, it was easy to tell that it was a new product from Öhlins thanks to the gold / blue knobs. The set up is very simple, like any air fork: inflate the chamber following the table on the sticker on the right leg and then fine-tune it according to your preferences.

Weighing 71kg without gear, I am in the 66-85 psi range and initially inflated it to 75 psi and then climbed to 80. Fully deflated once out of the box, I put on 35 psi, cycled the fork a couple of times to balance the chambers, then I went to 55 and I repeated the operation to finally reach the final pressure, with a sag around 22%.

The breakaway force is minimal even when new, which helps a lot in absorbing small bumps – that buttery sensation that mountain bikers like so much. Does it need to be said that it pairs well with the Trek Top Fuel? With 10mm of travel more than the factory fitted SID and more sensitive hydraulics, you can forgive the extra 170 grams. 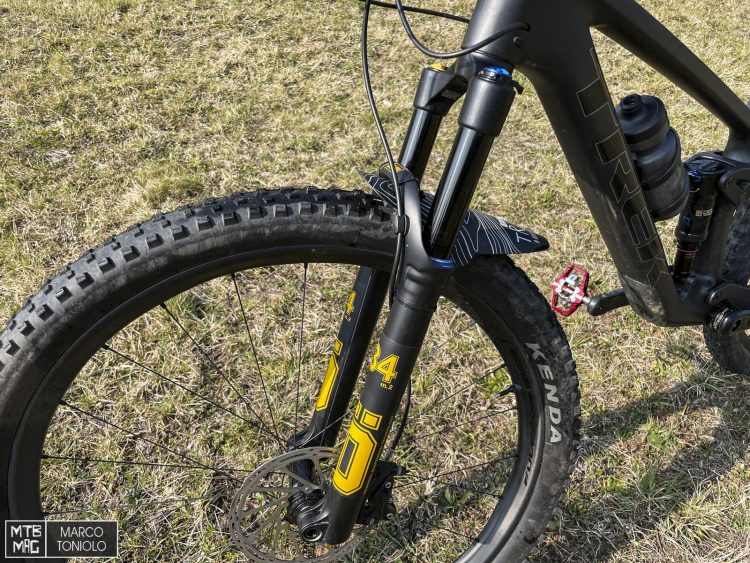 The sensitivity at the start of the stroke is constant even in the middle and towards the end of the stroke, ie the RFX34 is very linear in its behavior. For this reason, when I returned from Massa Marittima with an O-ring that continued to be dangerously close to the crown, I added a spacer, thus going to 4 out of the 5 maximum reducers. The situation improved marginally: I continued to use full travel, without violent impacts or jumps with flat landings. In itself a linear fork isn’t necessarily a bad thing, except that for my taste the RFX34 was a bit unsupportive at mid-travel. So I increased the compression at the low end, going to 11 clicks from the full open but, even here, little changed.

Mind you, the smooth and buttery feel of the fork is close to perfection, but if you have an aggressive riding style you will find that there is a lack of support in the middle and progressiveness at the end of the travel. I wrote in the Trek Top Fuel test that you go far beyond what XC is with such a bike, in fact I would call it more trail riding than downcountry, especially with a 130mm fork. Here, I would have expected more progressiveness from the RFX34, in the style of the new Fox 34, and above all a more full-bodied mid-stroke that would support me more under braking and on steep sections.

Buttery, with super sensitive hydraulics, the new Öhlins RXF34 m.2 is very sensible and offers plenty of traction. However, I was not convinced by its excessive linearity and a certain lack of support in the middle of the travel, despite having played with the settings and having put 4 spacers out the 5 maximum, which at my weight should not be necessary.