This year Pivot Cycles took the Mach 429 Trail and, mainly via spec, gave it more of an aggressive kick, thus transforming it into the Trail 429 Enduro Edition. Personally I’ve always liked the idea of ​​taking somewhat aggressive short travel 29″ bikes and replacing a meager inline shock with a piggy back shock, overforking it by ~ 10mm and beefing up the tires. Provided the bike starts out as competent in the first place, that usually makes for a really fun, and surprisingly capable bike. Well – that’s precisely what Pivot did with the Limited Edition Trail 429 on test here … 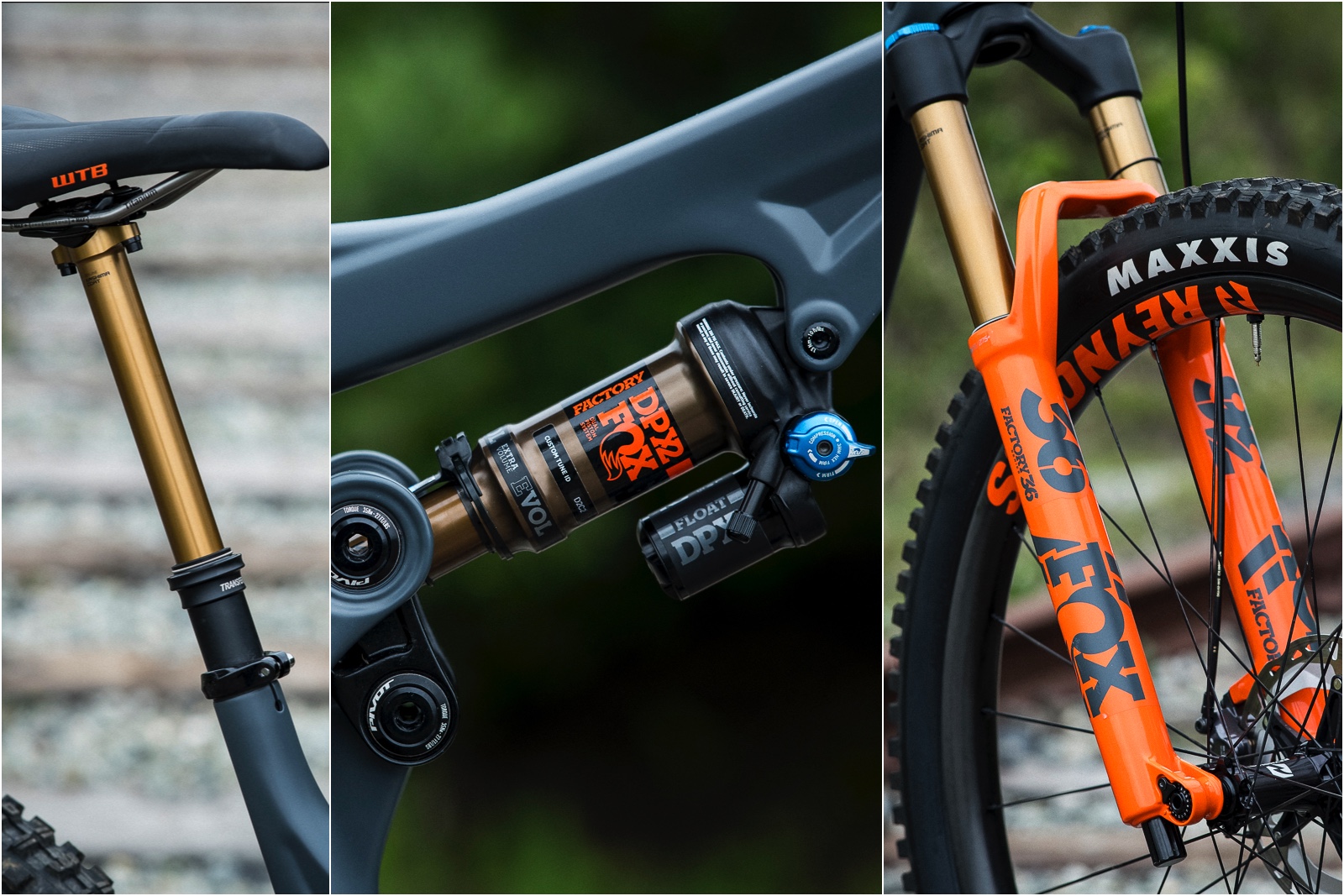 Fox all around for the things that go up and down. From left, a 150mm Transfer Factory seatpost is standard on the XL. To beef things up, Pivot specs the DPX2 piggy back shock out back, which, as mentioned earlier fares better than an inline shock when things get rowdy. Also on the beefy side of things, the Trail 429 Enduro is fitted with a 140mm Fox Factory 36 featuring a shorter, 44mm offset. 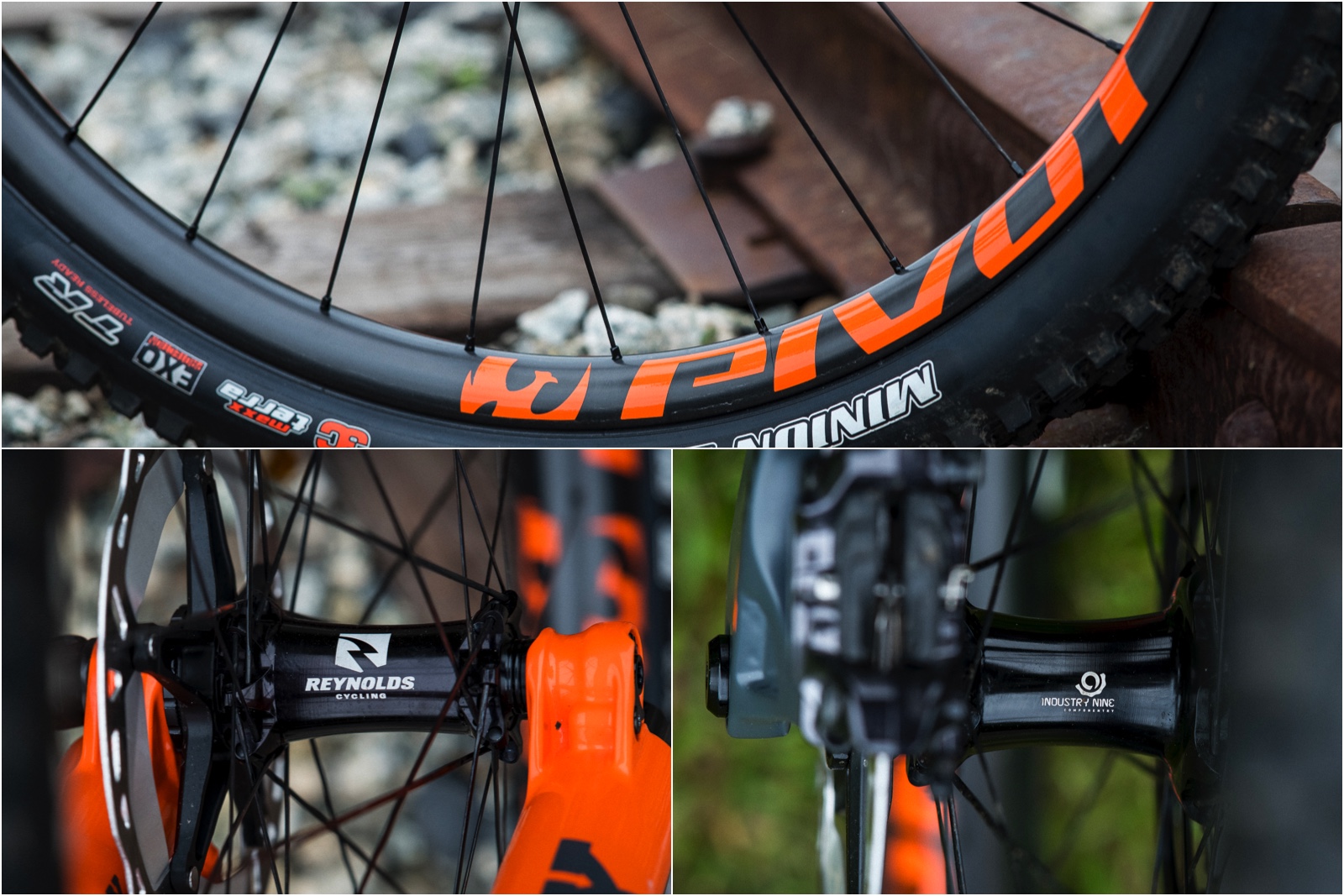 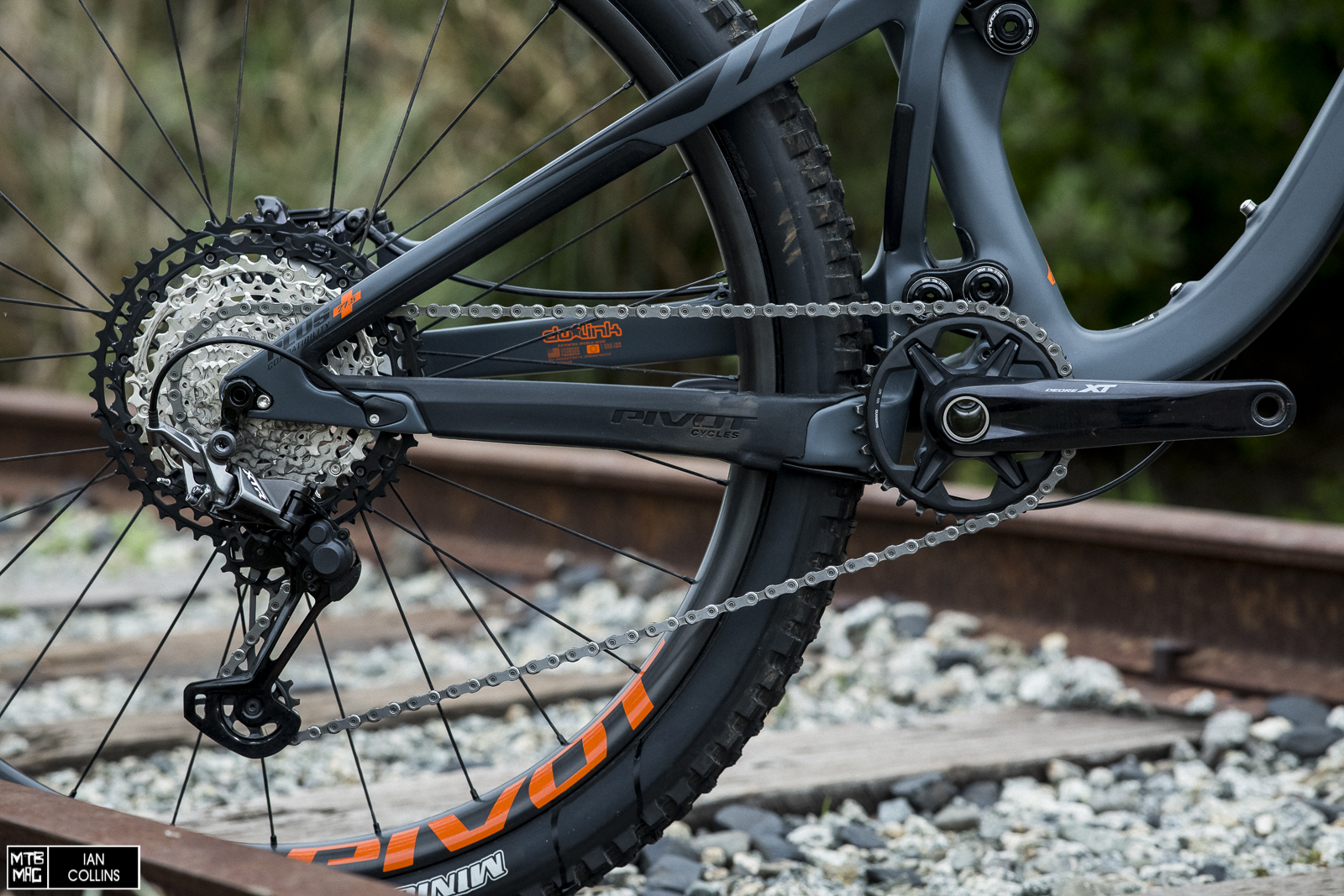 Along with this spec is a new Shimano 12-speed groupset consisting of a mix of mainly XT components with an XTR rear derailleur. The front chainring has 32 teeth and the rear cassette features a 10-51 tooth gear range. 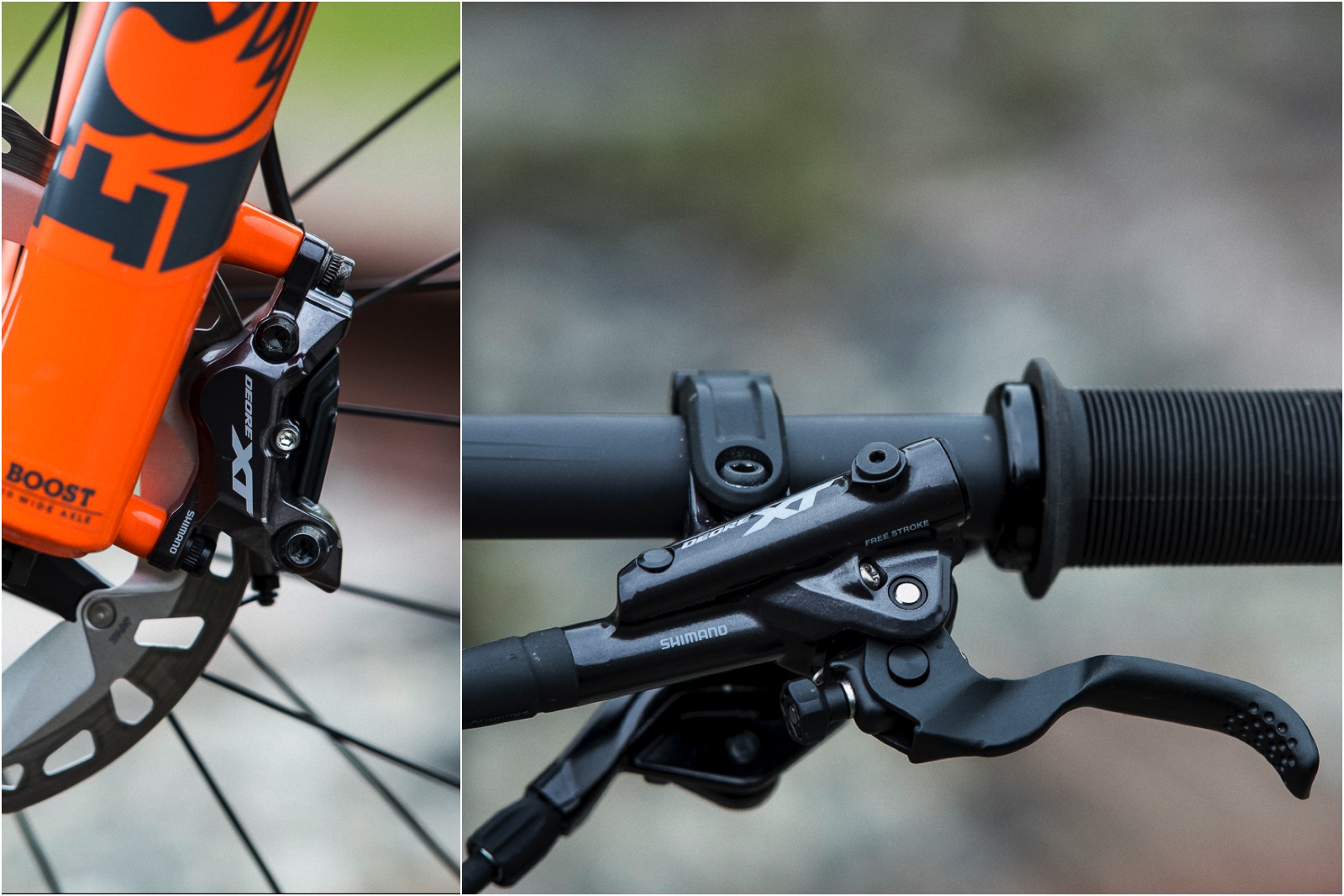 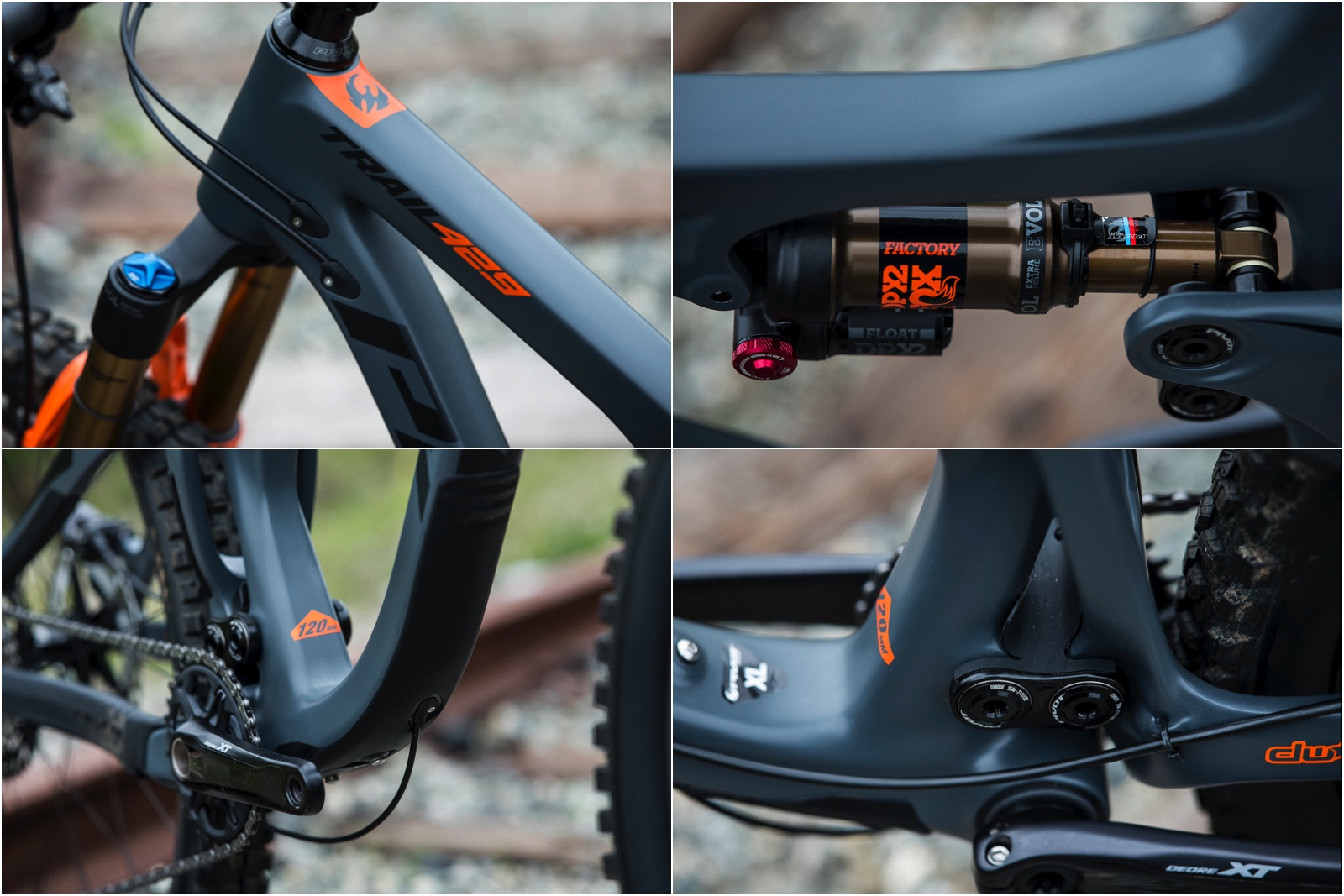 It’s the little things … Clockwise from top left: Anchored mounts prevent cables and hoses from rattling where they enter the frame. Pivot includes a handy sag indicator that zip ties onto the shock body for an easier setup. A mudflap, for lack of a better term, mounts in a clean fashion on the DW-Link to prevent crud and rocks from interfering with its action. Lastly, the rear derailleur cable exits the bottom of the downtube through a port in a large guard at the bottom of the tube, to prevent damage from rocks.

Starting with fit, at 6’0 “, I almost always ride a size large. With that in mind, I was a little surprised to have an extra large bike arrive for testing, especially given that the Trail 429 comes in 5 sizes. While most brands these days have pushed for longer reaches as of late, this particular model from Pivot is a bit on the short side of things with the large coming in just shy of 460mm reach. With the XL hovering a hair over 480mm, it may have been a more appropriate size in some sense, but it did come along with a rather tall seat mast and standover. Paired with a relatively slack seat angle and a short dropper post, in all honesty I didn’t feel quite as settled into this bike as I have on many others as of late. 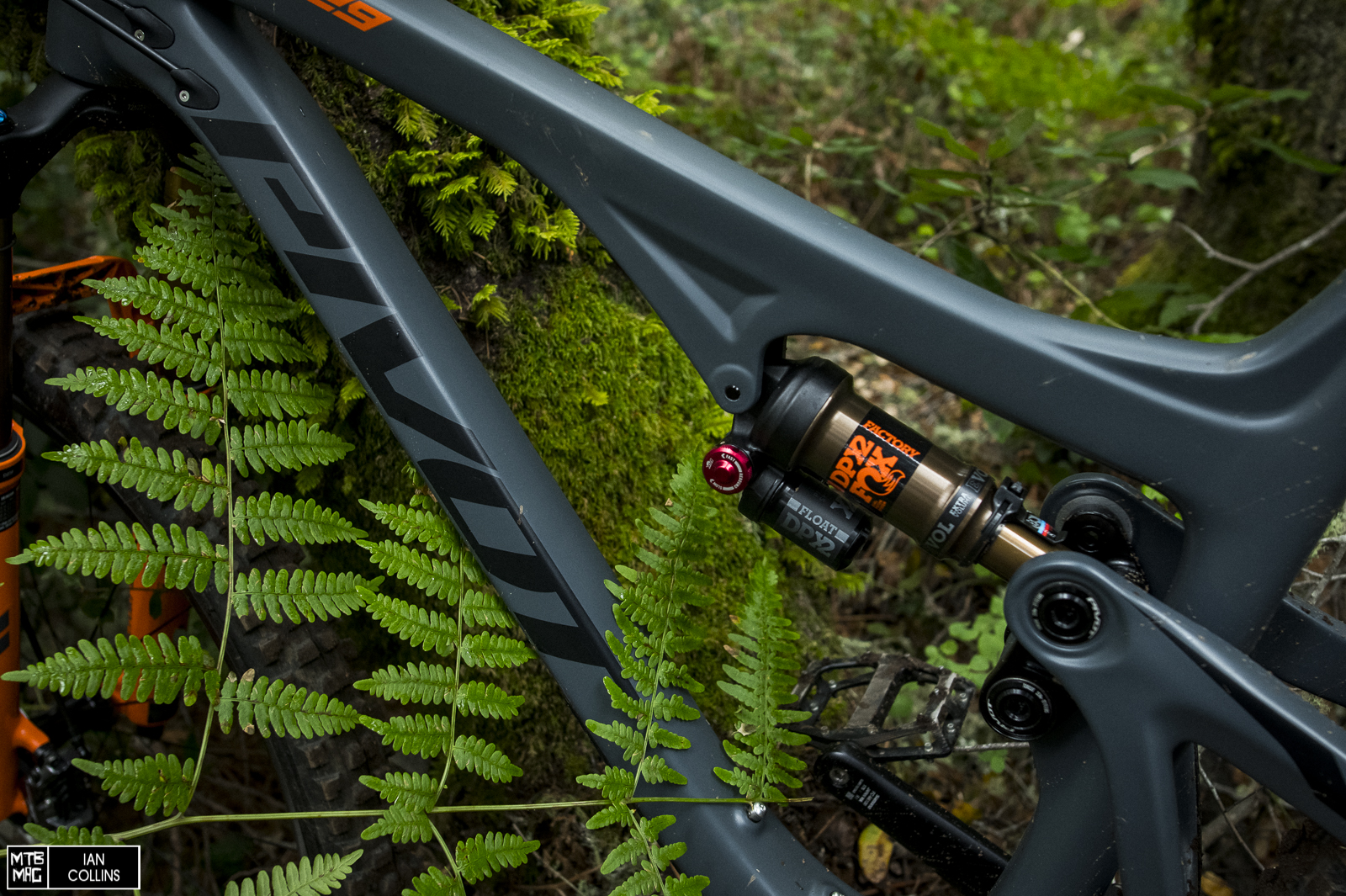 As far as suspension goes, I started out with and stuck with my pretty standard go to of ~ 20% sag up front and ~ 30% out back settling in nicely right away. While I think the tune for the rear shock was mainly good, I was surprised to eventually find myself with the rebound completely closed. At 180 pounds, one can’t help but wonder how that would work out for heavier riders. Anyhow, one thing I would like to point out is that this bike was set up with an attention to detail superior to any bike that I’ve ever received for testing … EVER. Absolutely every aspect of bike and build was painstakingly looked over, so props to the crew at Pivot – I hope all of the bikes going out to consumers get that same white glove treatment.

Out of the gate, to no surprise, the Trail 429 climbed very efficiently – this is just about always the case with DW-Link bikes. The pedaling was neutral enough that I never really used the lockout on the rear shock. With that in mind, there are two main factors in how a bike climbs – there is the aforementioned kinematic behavior, but also the aspect of body positioning. Lately – most newer bikes, including the latest Pivot Switchblade , are moving toward steeper seat tube angles. This encourages your body to be in a more forward position, which can greatly improve climbing stability and traction while preventing unnecessary fatigue as you aren’t fighting the bike. In this realm, the Trail 429 has a relatively relaxed effective seat tube angle of around 74º, that made it a bit difficult to get my weight up over the front, which was less than ideal. In any case, to compensate I ran the saddle with the rails slid all the way forward for the duration of my testing. 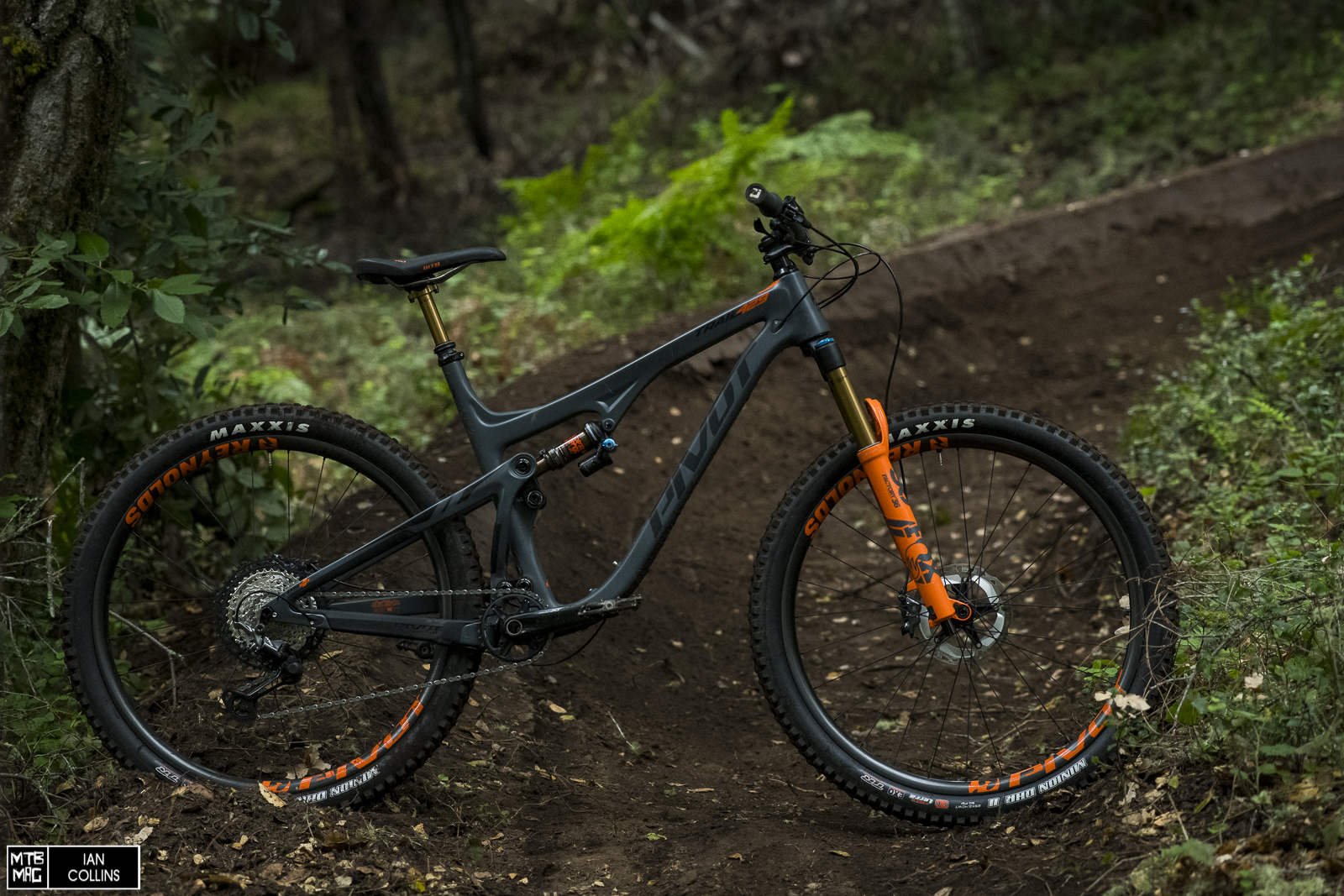 The stoutness of the frame could be felt immediately in its handling – surely a combination of intelligent design and the broader “Super Boost” 157mm rear hub spacing. On that note, while at the time of writing this, the new hub spacing hasn’t exactly taken the industry by storm, it is becoming increasingly prevalent. Broadly speaking, my initial thoughts were that Super Boost didn’t seem necessary, and it might be a hindrance in terms of clearance with trail side obstacles. During the testing of this bike however, I never really had any issues and hardly noticed the newfangled hub spacing, save for its increased rigidity. I’m no engineer, so I can’t extrapolate any data and decide how much added stiffness should be attributed solely to the wider hub spacing, but I can say that in the real world the bike cornered very nicely and was one of the more rigid bikes I’ve ridden in this category, without feeling unnecessarily harsh. 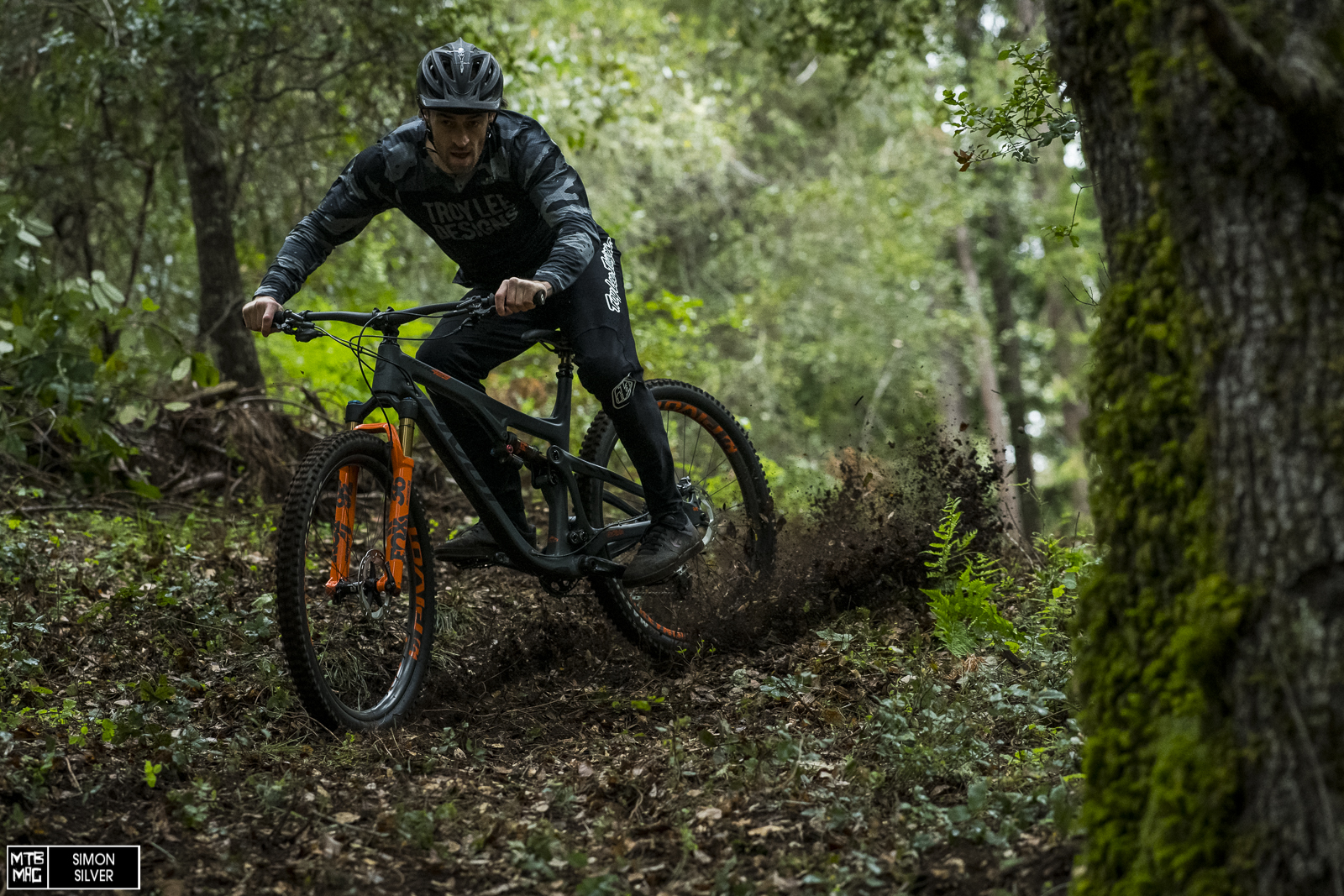 So, this particular build takes a frame design that’s a couple of years old and “overforks” it (read: adds travel) by 10mm with a shorter, 44mm offset fork. The shorter offset brings the front axle back a touch and improves the bike’s stability at speed, which means compared to other models of the Trail 429 with 51mm offset forks, it might feel a bit “detuned” so to speak, particularly at lower speeds. Personally, I found the handling to excellent overall – these mods just open up how much more you can push the bike, and while I haven’t ridden the standard Trail 429, based on what I felt and what’s on paper, this model is more surefooted on steep terrain. Here in the Santa Cruz area we have plenty of that and I made a point to ride the bike a bit over its head on some of our steeper offerings, where it would do just fine. Something else that gave the bike a more confident disposition was a shock with a reservoir. Personally, I’d prefer to see all full suspension bikes, save XC specific rigs, spec’d with piggy backs over inline shocks. In the case of the Trail 429 it translated to more traction, calmer behavior under long descents and improved big hit capability. 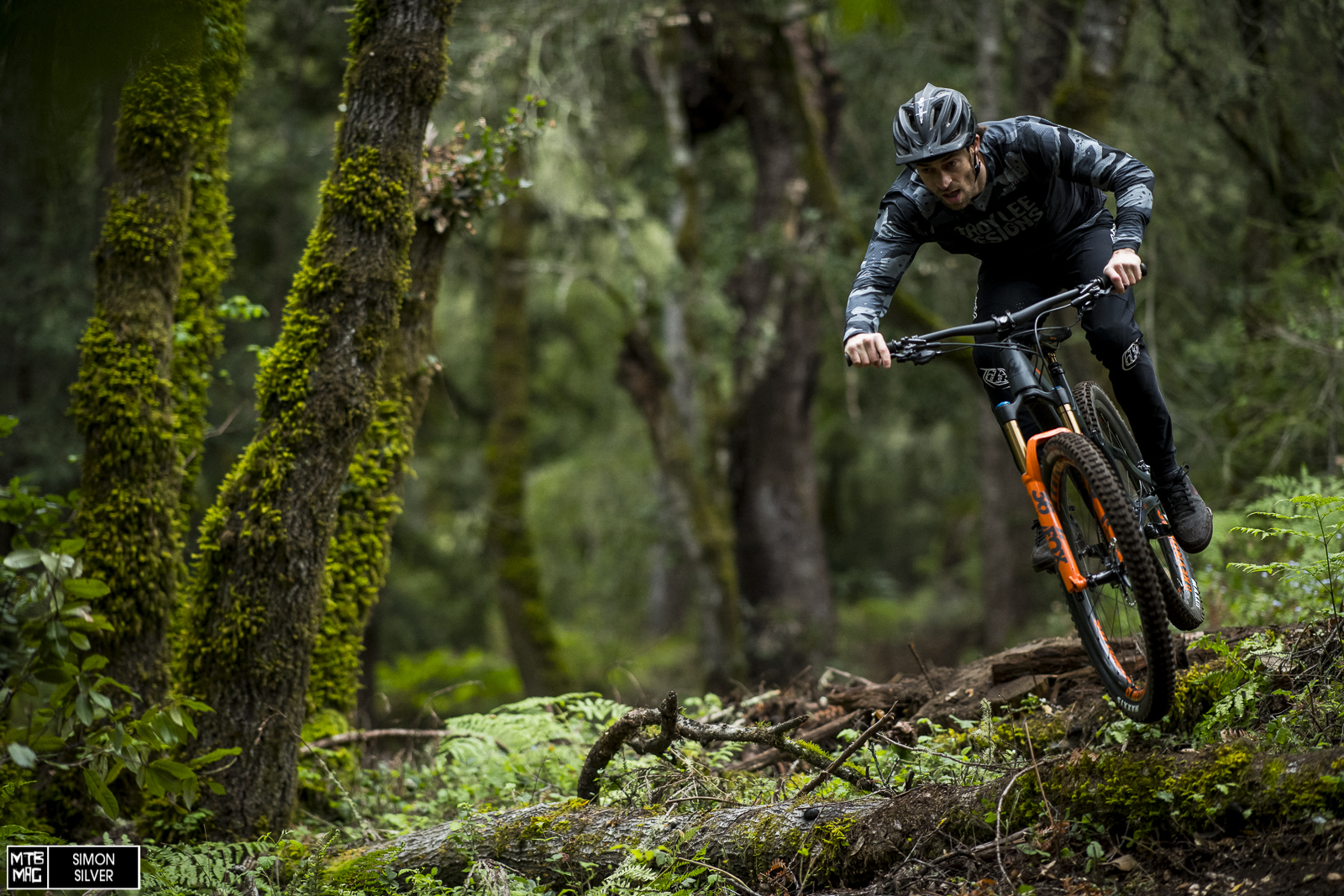 As far as the parts choice is concerned, the crew at Pivot has largely done a great job, with my single minor issue being a bit of an oddity which can’t have the blame placed at Pivot’s their feet. Shimano’s 12 speed XT drivetrain and 4-piston brakes are more than up to the task of all day missions and slowing down much bigger / heavier bikes respectively. Given the bike’s intended duty, I was quite happy to see the stouter Fox 36 in lieu of the skimpier 34 up at the front. The 36’s range in adjustment and steering precision are the best in the category, so hats off there. Personally I found the Reynolds wheels to be plenty stout for this bike as they’re rated for longer travel Enduro bikes. The freakishly fast engagement on the Industry Nine Hydra hubs that they roll on was absolutely a treat as well, making for instant power to the pedal out of corners and on techy climbs. Having the wheels wrapped in Maxxis Minion DHRII Wide Trails front and rear was like having a bit of extra travel and thus beefed up the bike’s capability at the modest expense of some added rolling weight and resistance.

As far as cockpit is concerned, I got along great with the handlebar saddle and stem, although I wasn’t much of a fan of the grips – which is a small matter and broadly known to be a very personal part of a bike anyway. The one issue I did have was with the seatpost not fully extending. I’ve ridden and tested Fox’s transfer posts extensively and always lauded them for their durability and the fact that you can modulate the return speed. Surely this is something Fox would handle graciously through their excellent customer service program, but it’s worth calling out no less. And for the record – NO, I did not overtighten the seatpost collar. My last quip in the seatpost arena is that the long legged among us would appreciate the 175mm travel dropper option on the Large and XL sizes. All in all, aside from that isolated issue, the parts have been excellent and I think the choices of spec were all pretty well made given the bike’s intentions.

I’d say Pivot has done a great job all the way around with a darn good mix of trusted parts coming in at a pretty reasonable price, especially for a boutique brand. Outside of wishing it had a 175mm travel seatpost, there’s little to pick apart. The wheels, brakes, suspension and drivetrain are all excellent. At the end of the day it’s a great bike with a couple of quirks, but that’s to be expected from a limited edition “lunch ride” style bike that blurs category lines. If you’re in the market for an aggressive trail bike and you can forgive a bit of lost sprightliness on the climbs for a bit more confidence on the descents, this Limited Edition Trail 429 is worth a look.

IZZO: The All New Trail Bike From YT