This Spring, Santa Cruz sent us the new Hightower for testing. Now in its third iteration, the All Mountain bike is the brand’s utilitarian offering – the most “one and done” bike in their lineup. Since there hasn’t exactly been a ton of new developments in that category over the last couple of years, I was very much looking forward to trying it out on my local trails.

With new kinematics, internal downtube storage and a slew of other updates the sum of those parts make it a much different machine than the last Hightower, even if it might not appear to be upon first glance. Let’s dive in and see what all the fuss is about… 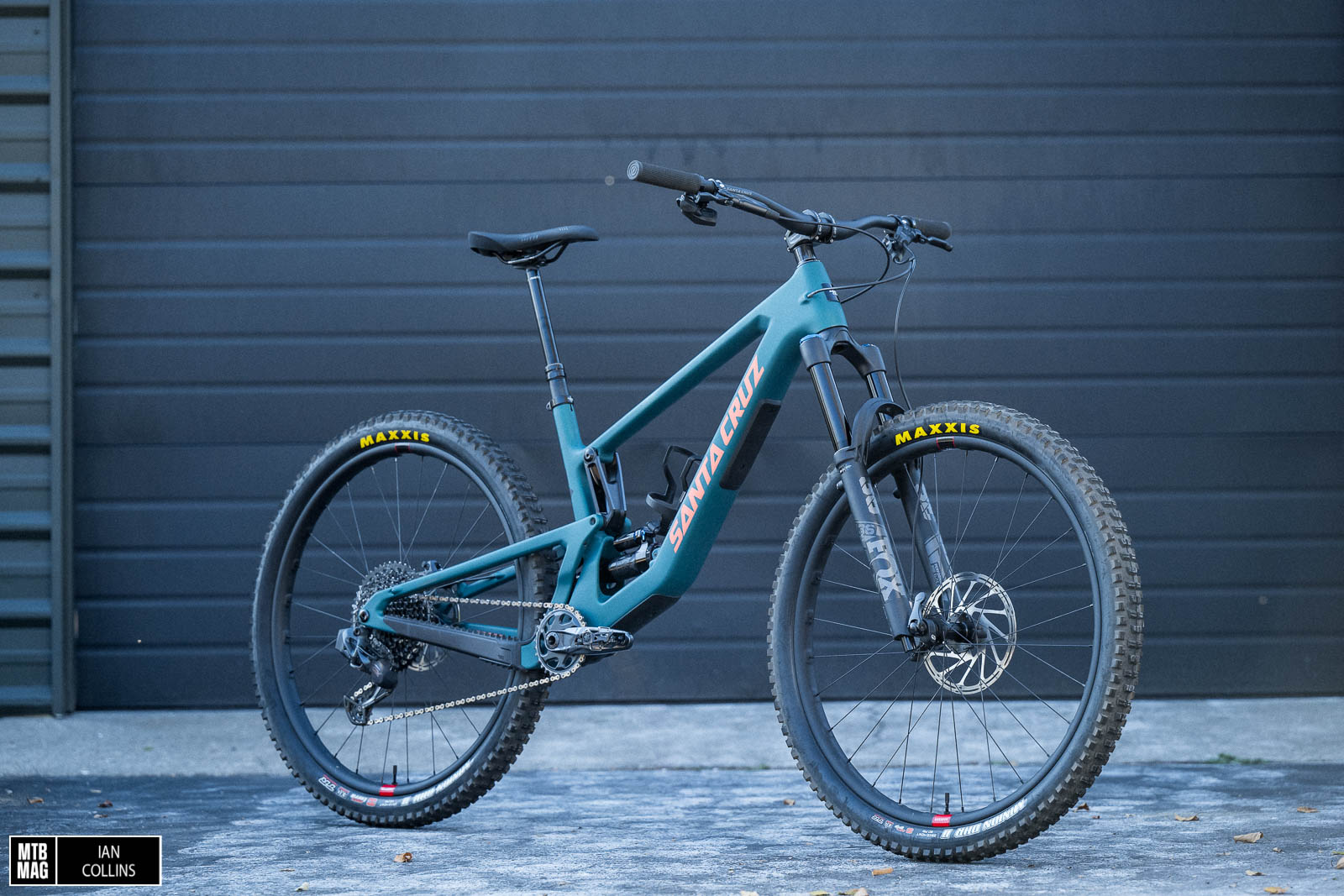 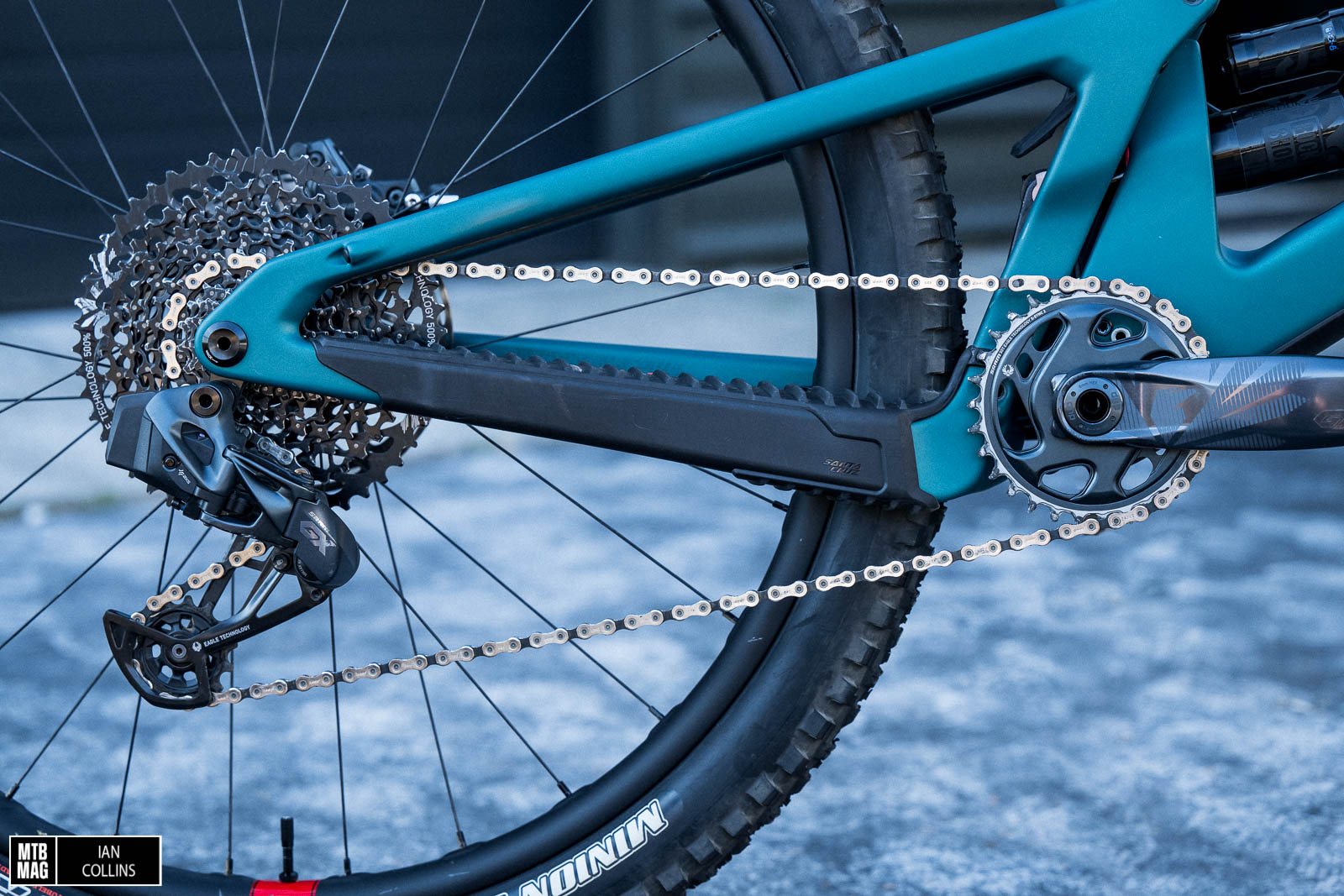 Starting with drivetrain, this model features a full SRAM GX Eagle AXS drivetrain. The keen eyed amongst you may notice that I swapped the 32T chainring for a 30T. Maybe I’ve gotten soft over the years but on a 29″ bike this long legged, paired with a 10-50T as opposed to a 10-52T, I wanted a little more help on the big climbs. 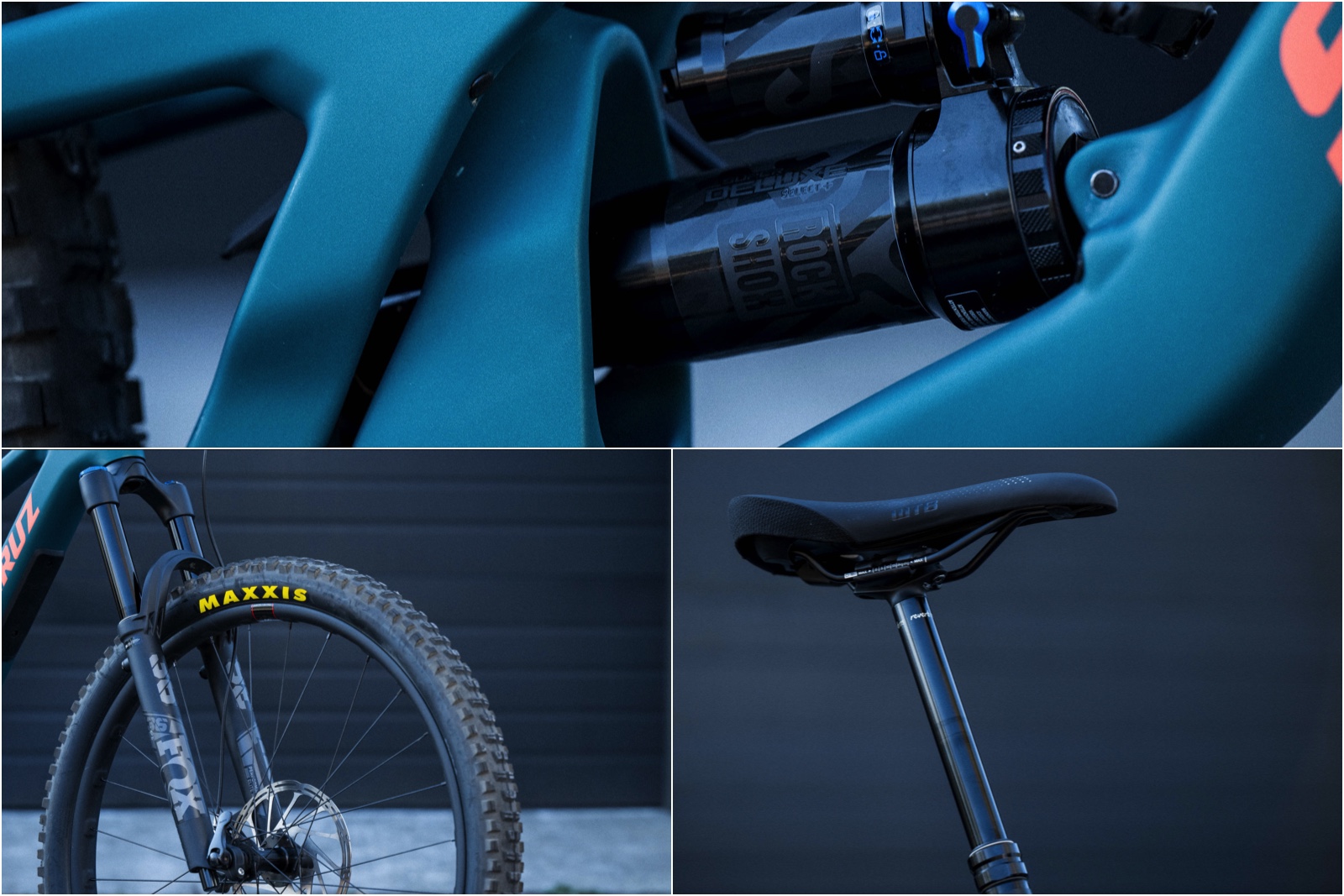 As far as suspension goes, out back this model features a 2023 RockShox Super Deluxe Select+. This has been my first experience on the all new chassis, which hadn’t been updated in five or so years and I have to say that I’m beyond impressed. While I do think a bike that edges on the $10K USD mark should have a flagship rear shock, I wasn’t really missing the additional adjustments because the kinematics and tune were so good. Up front, the Fox 36 Performance Elite has 150mm of travel and four way damping adjustments. It is truly an excellent performer that leaves nothing to complain about. *Note the 200mm front brake rotor – Santa Cruz spec’d 180mm rotors front and rear. For a big wheeled bike that’s this capable, that just isn’t enough. Lastly, the 175mm travel RockShox Reverb was a warm welcome in terms of travel but its hydraulic operation can be more of a headache in terms of maintenance and use in colder temperatures compared to simple cable actuated posts. 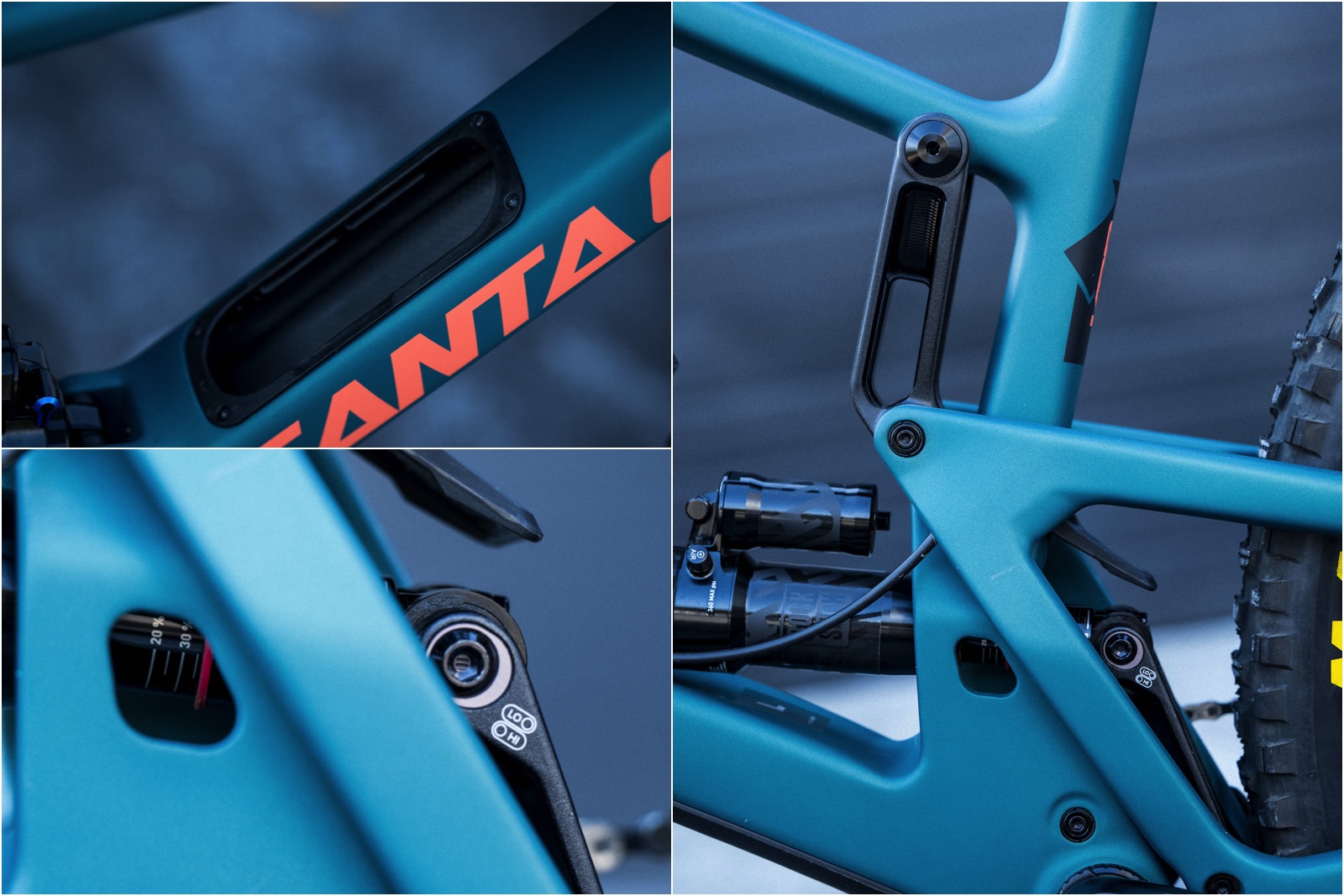 “Glovebox” internal storage is a huge bonus. I like that Santa Cruz includes two bags – one for a tube and one for tools/flat tire paraphernalia. This makes it easier to pack the downtube. Additionally, you have a standard flip chip in the lower link, which makes subtle geometry changes – 3mm BB height and reach, ~.3º head tube /seat tube angles. The lower of the two settings provides a bit more bottom out resistance for the shreddier riders out there. Lastly, there is a sag window, which makes suspension setup much easier. 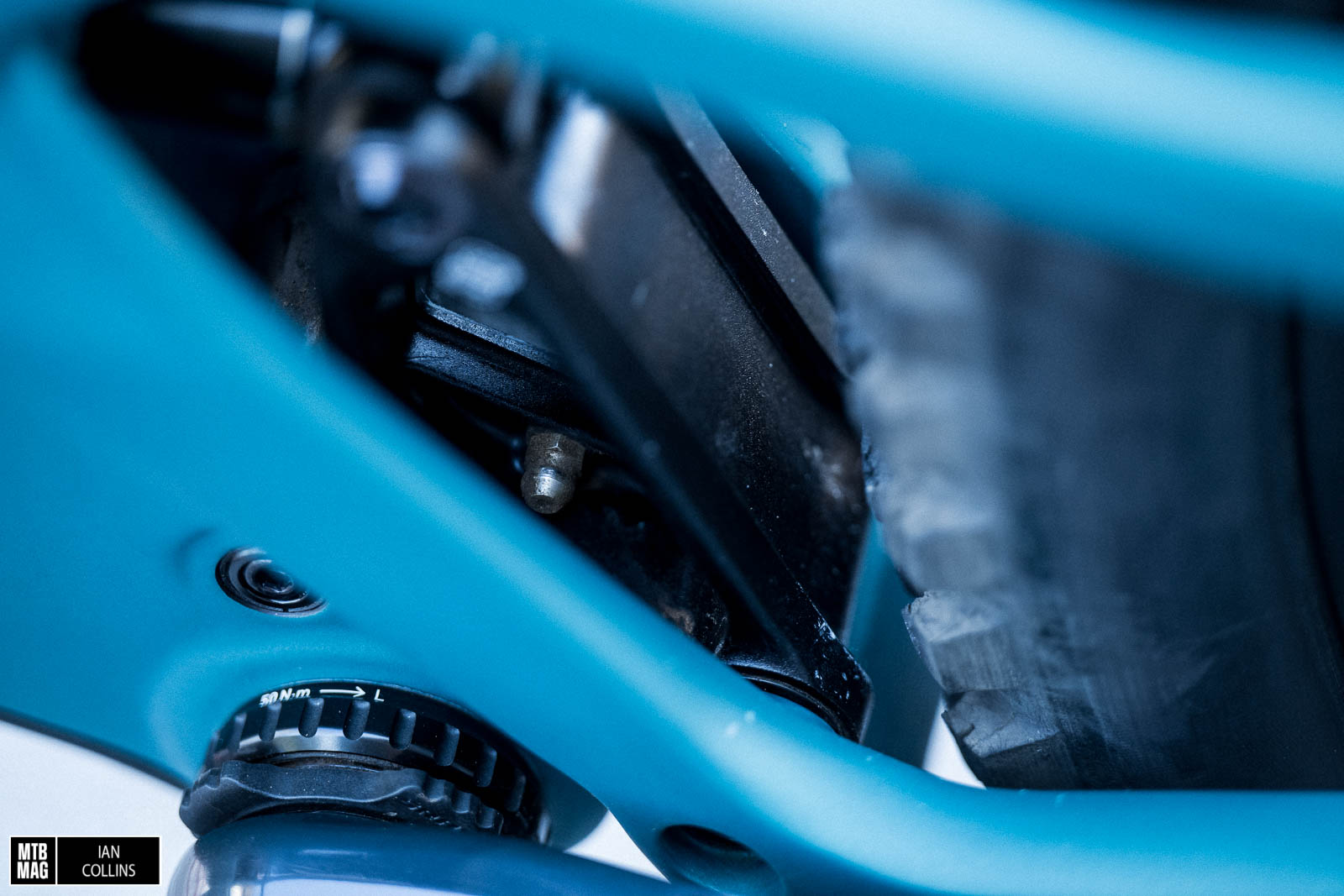 While it’s great that the lower link features a zerk fitting for maintenance, unfortunately isn’t accessible without *some disassembly. A few other frame features – Clockwise from left: I’ve found the rubber protection on the chainstay is super quiet and does boast a bit more coverage than many other options on the market. The cable/hose routings are fully sleeved and totally silent. The empty holes are nicely plugged with little rubber grommets. Lastly, in addition to a rubber downtube guard closer to the BB area, there is a second patch to protect against shuttle pads chaffing as well. The cleanest brake routing in the game. 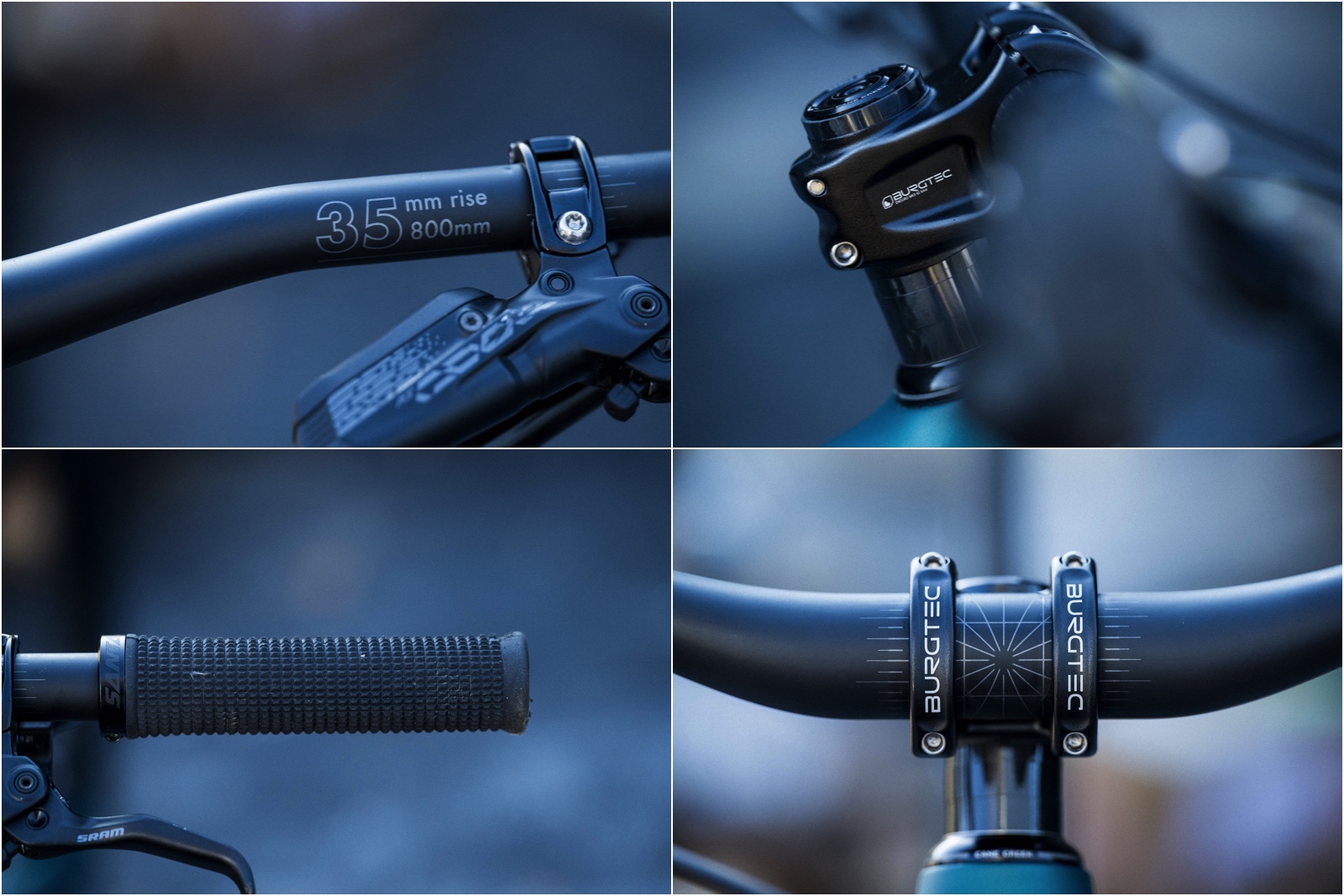 Touching on some cockpit parts, I loved everything up front. The 35mm rise in house carbon fiber handlebar had a nice ride quality and angles, plus as a lankier guy I welcome the additional rise. The Burgtec stem is excellent in terms of its bite and stiffness, but the 42.5mm length had me scratching my head given the slightly short 472mm reach. I slapped a 50mm on out of curiosity and found it more appropriate. Props to Santa Cruz for leaving room for a good amount of spacers on the steerer tube, and lastly the in house grips just might go on my next dream bike – while they do take a little bit of time to break in they are simply amazing. No complaints about the latest Reserve HD rims in combination with Industry Nine 1/1 hubs. The carbon rims are tough, lifetime warranted and offer a great ride quality. While they do lean on the stiff side of things they aren’t overly harsh. The i9 hubs offer easy tool free maintenance and fast engagement. I initially found the Maxxis DHR2 tires spec’d front and rear to be a little bit of a head scratcher. That was until I rode them. While the DHR2 is suggested as a rear tire, it actually works damn well up front. It does roll slightly slower than a DHF or an Assegai, but the all around traction was excellent. If I was keeping this bike long term, I’d probably slap a double down casing on out back, but I did find the slightly softer front and slightly firmer rear compound to boast plenty of traction while still wearing well. With SRAM’s Code RS, you get reach adjustment and Swinglink, but they do forgo the adjustable bite point. This didn’t bother me, but I was a bit bummed on the 180mm front rotor as mentioned earlier. Regardless, the brakes were consistent, powerful and offer nice modulation. Personally, I’m not a fan of the WTB Volt. Seats are truly a personal item but I much prefer the Silverado…It’s nicely made and durable, but I just don’t get along with the shape and contour. To each their own! With a 2.5″ Maxxis Wide Trail tire, things are a little tight down by the seat stays and lower link. I didn’t have any serious issues but did hear a few small pebbles and rocks get schwacked in there. No major damage, but it can be slightly disconcerting at times, depending how many loose rocks are in your local terrain.

Starting out with climbing, we can contextualize things through past models from Santa Cruz – many of which featured a high degree of anti-squat and leverage rate curves that were less straightforward. Their latest models see reduced anti-squat and broadly speaking they have a fairly linear rate of progression. This means that the suspension compliance has improved massively – especially in the mid stroke, where successive impacts would otherwise feel rough and transmit feedback through the pedals. Reducing anti-squat too much can make a bike wallow in its travel but personally, I think that Santa Cruz aced it and found a nice balance point. Overall, the kinematics are greatly improved but do feature a bit more baked in movement on the climbs, so the tradeoff cost is a slightly less firm pedaling platform under power. In simple terms you may be reaching for that lockout lever more often on the long grinds. A worthy tradeoff for me… 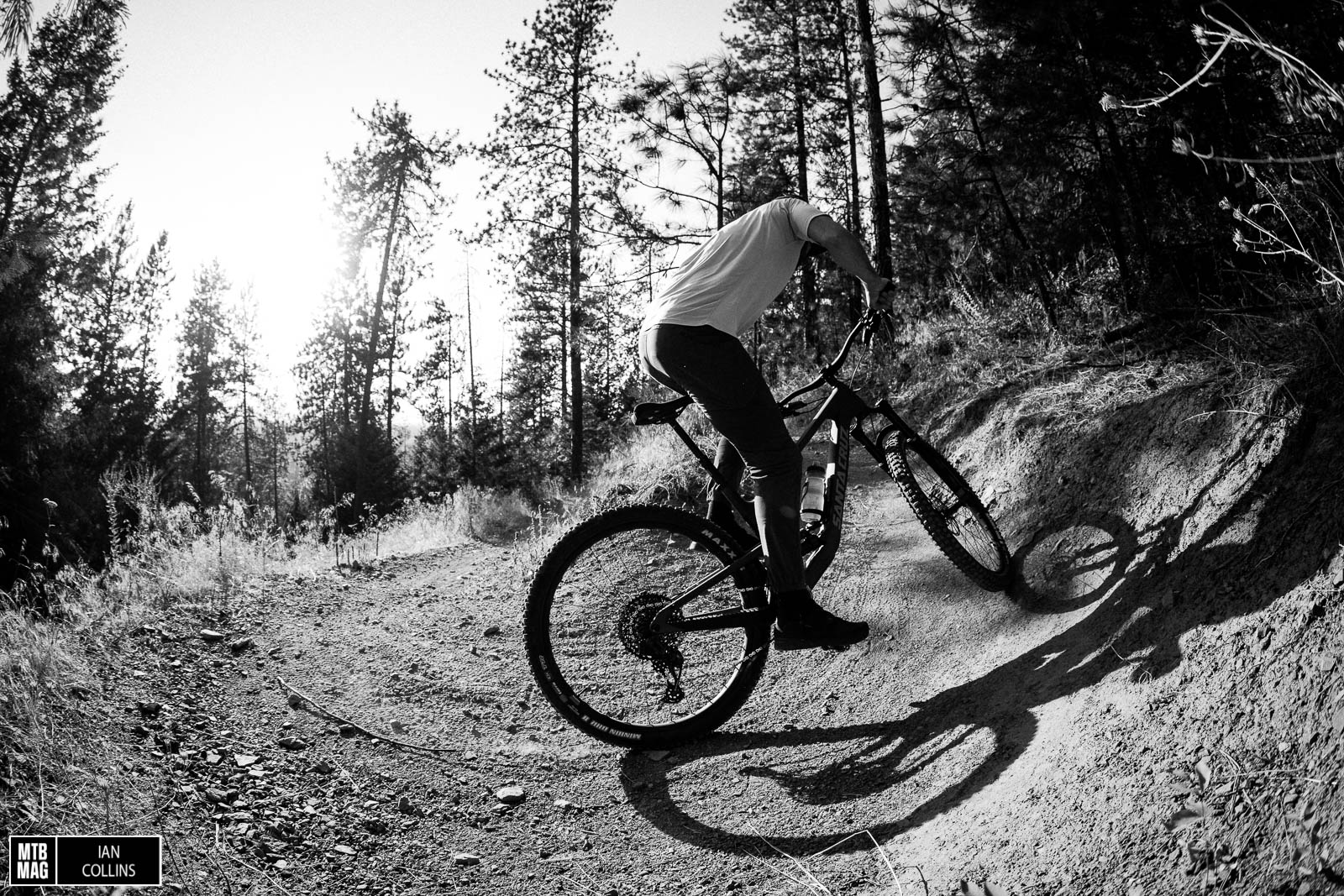 As far as the handling is concerned I’ll start with geometry. The numbers here aren’t super aggressive, nor are they all that conservative. In short, they’re safe – as they should be on a bike in this category. This means that you could spend all day on this bike and not get exhausted by a machine whose angles demand high speeds and aggressive terrain. On the other side of things, it’s roomy and slack enough that a you can confidently descend the vast majority of terrain you’ll encounter on most rides. At 6′ tall I tested a size large. While I personally prefer things a touch closer to the 480mm mark in terms of reach, I was quite content on the Hightower with its 472/475mm reach. As mentioned earlier, switching from the 42.5mm stem to a 50mm made me feel right at home – less behind the front axle. In any case, this is a really sprightly bike – it loves to jump and is very comfortable in the air. Things like traction under braking and in the corners were simply an afterthought and I found that the Hightower is really just a bike that you don’t really have to think about. The suspension is very sensitive and light off the top but I’ve yet to experience a harsh bottom out. While I had no real complaints about the suspension, I was left curious how the Hightower would ride with a coil shock but unfortunately it’s not compatible with one. When I reached out to Santa Cruz to inquire about this, they informed me that it wasn’t about kinematics but rather about squeezing out more dropper seatpost travel. By tightening up the hole that the shock passes through the bike gained between 10-20mm of post travel (depending on size) and on a mid duty bike such as this, I can absolutely see why that was a priority. As far as how all of the frame features come though on trail, I obviously loved having the downtube storage as it just makes life easier and decreases the likelihood that you’ll need to carry a bag. The Hightower is also a super quiet bike – something that helps it become and afterthought on trail. This mainly is due to nicely designed rubber protection, sleeved internal routings and sturdy, well designed hardware. Distraction free riding really does add to the experience and provide peace of mind…

I’ve spent a decent chunk of time discussing the attributes of the frame itself because that’s what’s at the heart of things and is most important. Santa Cruz has Hightower models that start at $5,499 and reach up to $10,699, so you can get in where you fit in. As far as value is concerned, on the particular model I tested here it doesn’t exactly blow me away. You do get some very nice features that typically come at a hefty price such as electronic shifting and carbon fiber wheels. However there are a few small things like the 180mm front rotor and base model shock which are a little annoying on a bike in this price range. It is worth considering that Santa Cruz does offer a lifetime warranty and have incredible support on offer for spare parts on models going back decades. At the end of the day I was very pleased with this bike and I’m not in a hurry to send it back. It ticks all the right boxes for a rider who would like the simplicity of having just one bike that does everything and does it well. That goes a long ways.

[Video] Free To Be – Matt MacDuff