Smith sent us home from Sea Otter with a fairly new set of glasses, dubbed the “Attack MTB”, for testing. Based around a fairly large coverage lens, they take advantage of Smith’s genius PivLock system and each pair come with an additional “Low Light Amber” lens, which is fairly light in tint and good at dealing with shadows. As things go from cool, foggy and loamy to hot dry and dusty here in the Santa Cruz area, we’ve had enough time to summarize our thoughts on them. Read on for the full review… 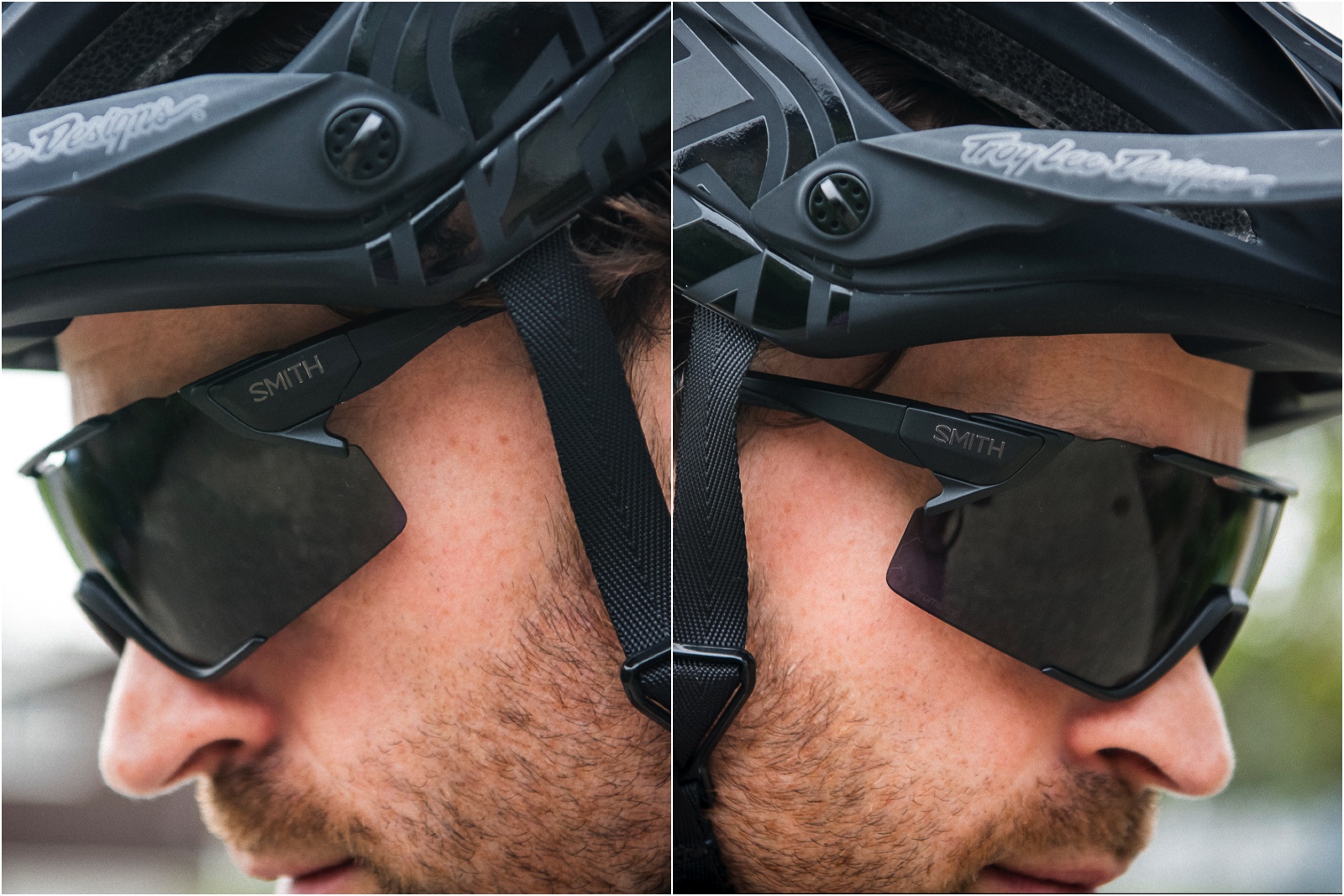 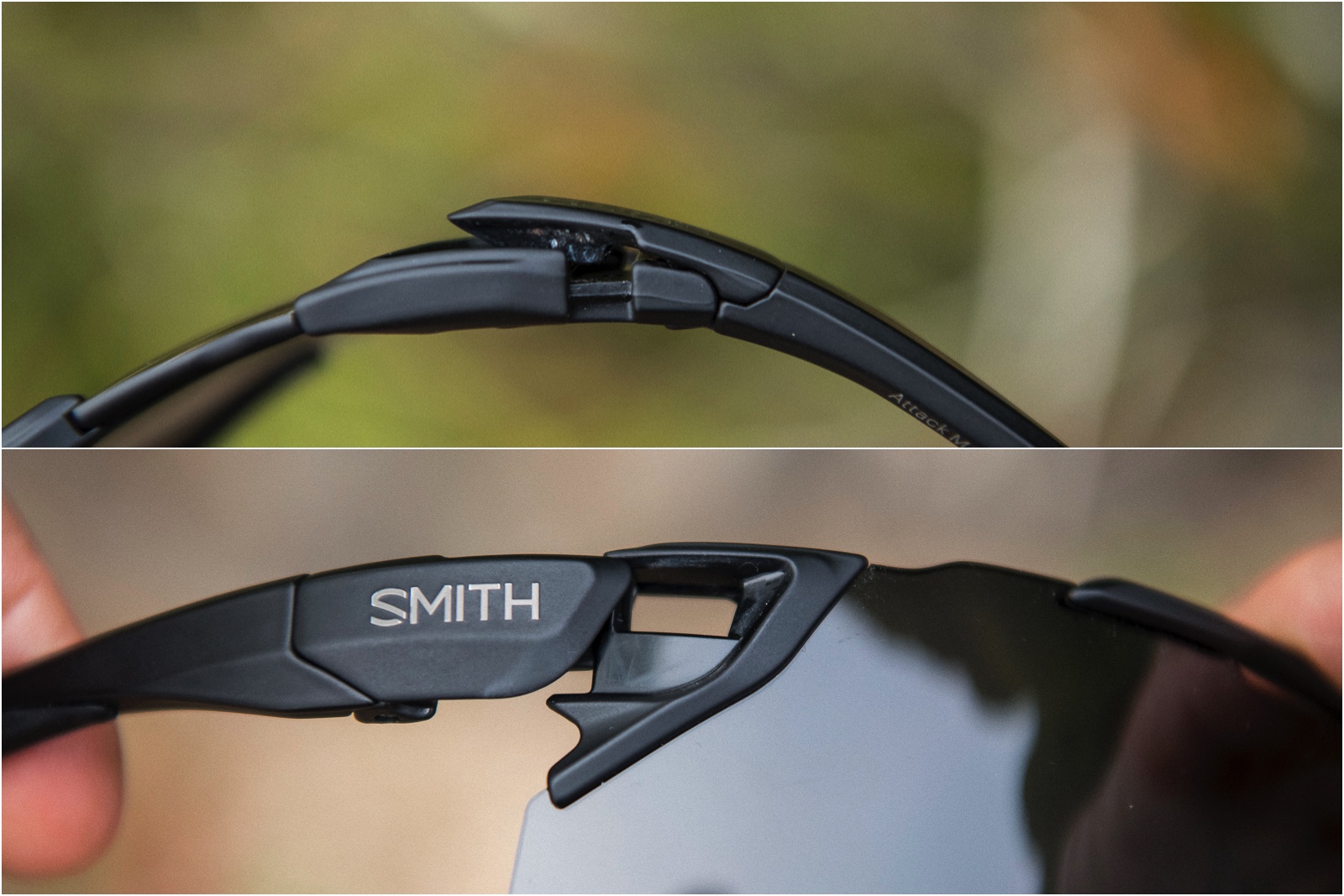 Perhaps the coolest feature on a set of performance glasses to date, FidLock means fast, tool free lens swaps in a matter of seconds. You simply hold your thumb down behind the hinge, then pull the arms off. Putting them back onto the lens is even easier…Slide them on until they click into place. 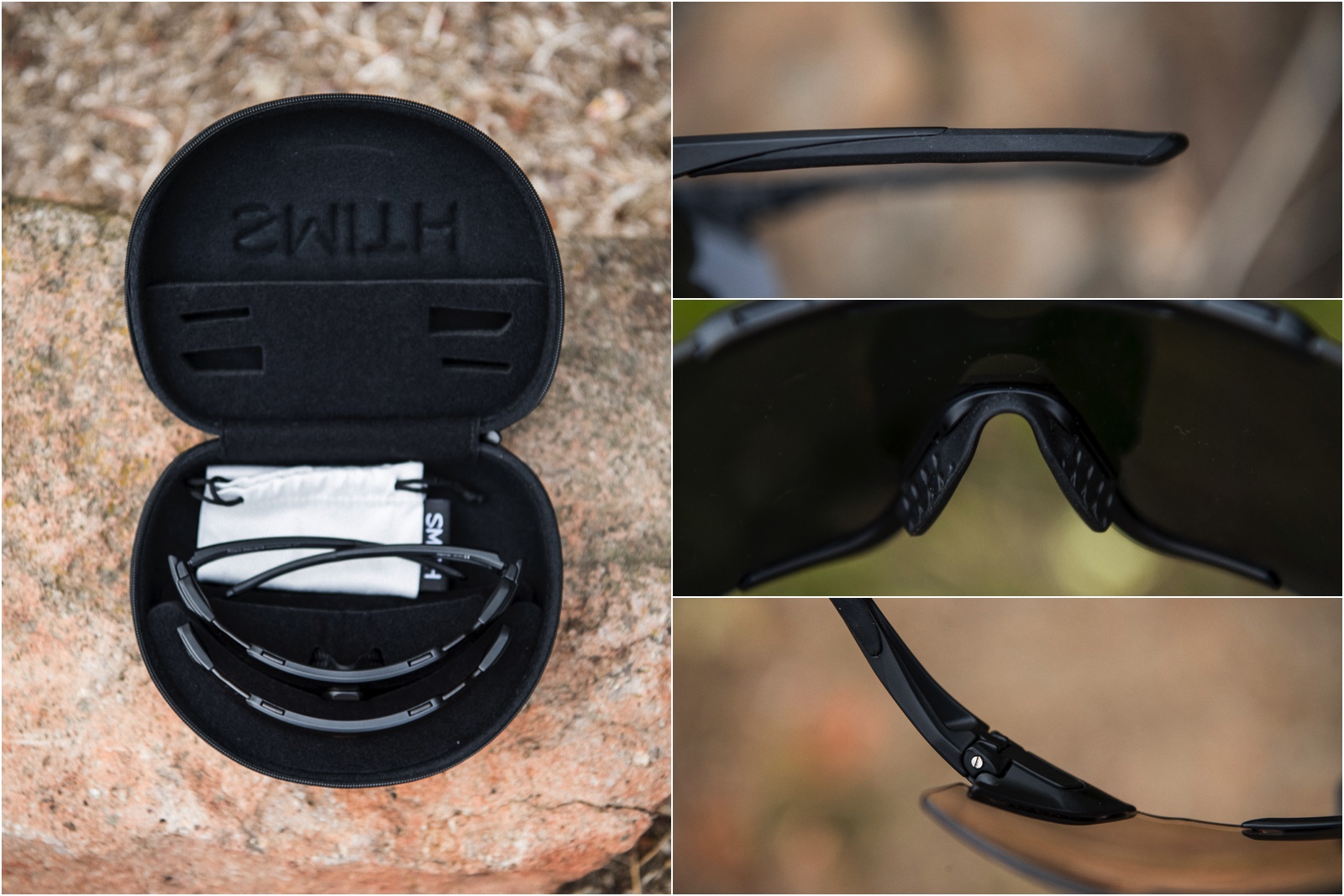 Clockwise from left: The Attack MTB glasses come in a nice padded case with a cleaning bag and laser cut foam padding. The arms are straight and low in profile with soft, grippy material on the inside and the underside. The nose piece is adjustable between two different positions vertically, to fit a variety of faces, which is key as the lens is rather large. Lastly, despite being removable with no tools, you can still tighten their actual hinge with a standard eyewear screwdriver. 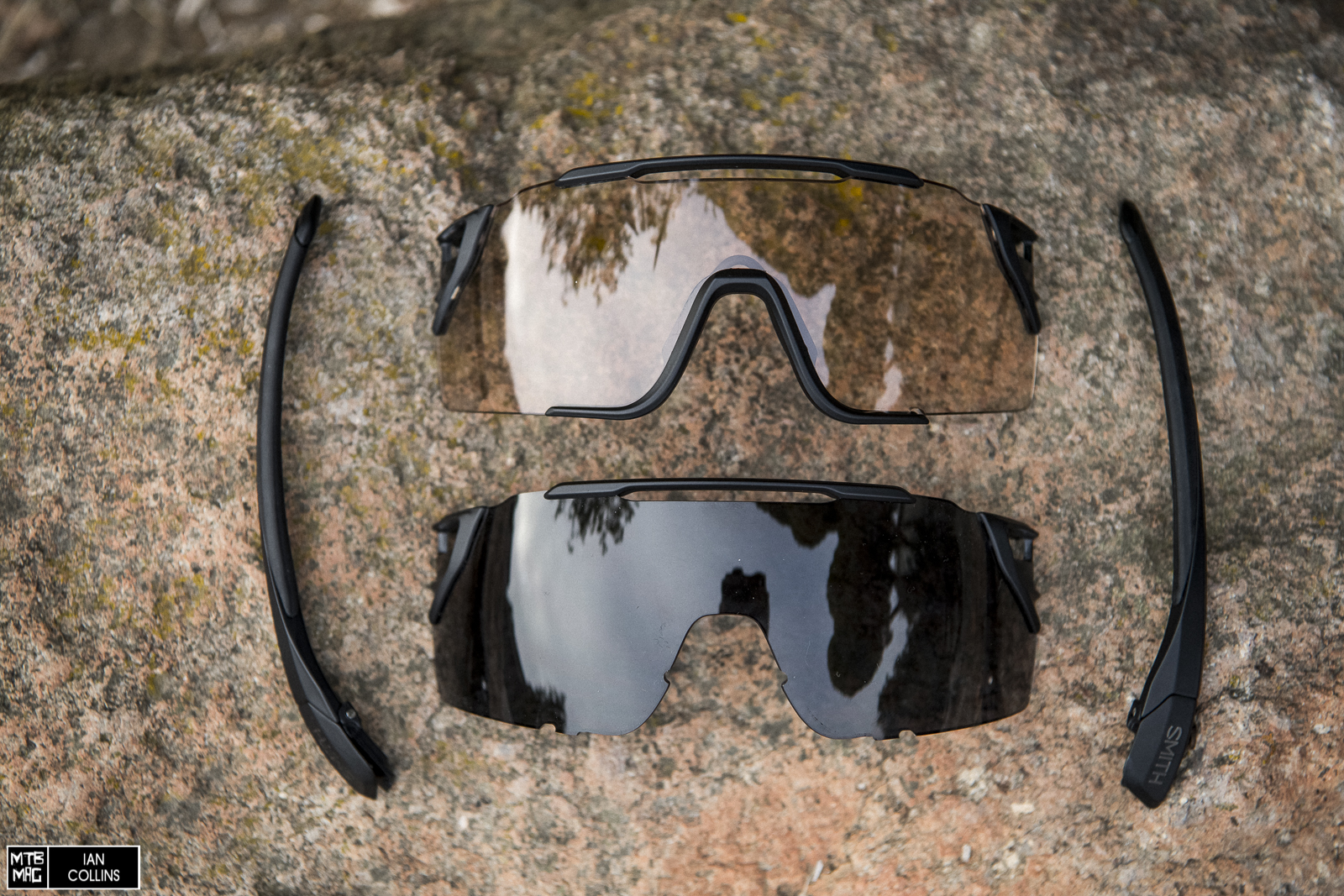 This is the whole kit with the arms removed. The nose fitting pops off with a simple tug and snaps into place rather easily with an audible click. 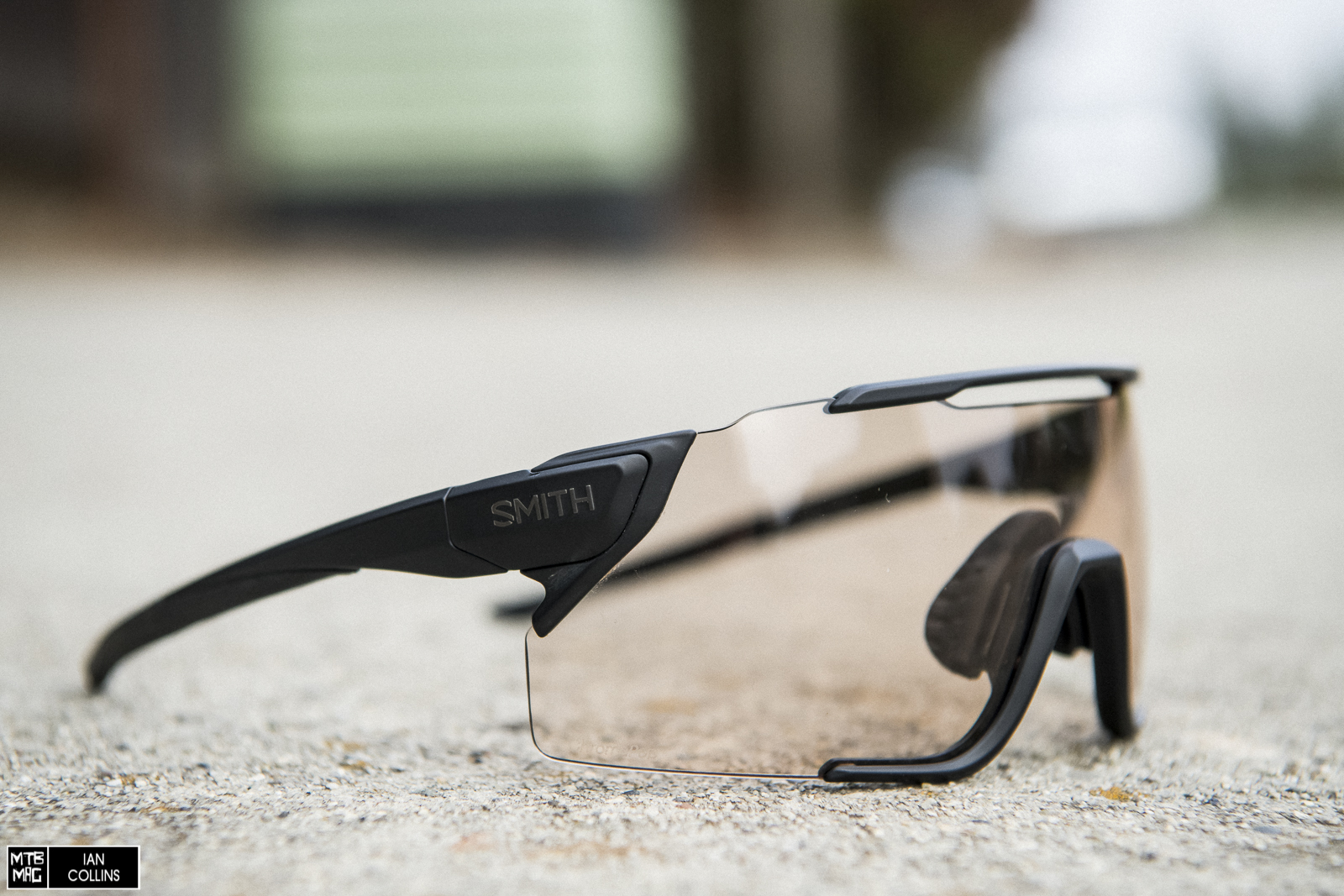 The Amber colored option is included with each set of Attack glasses. It’s great for riding in the woods, provided there isn’t too much canopy and a lack of light. 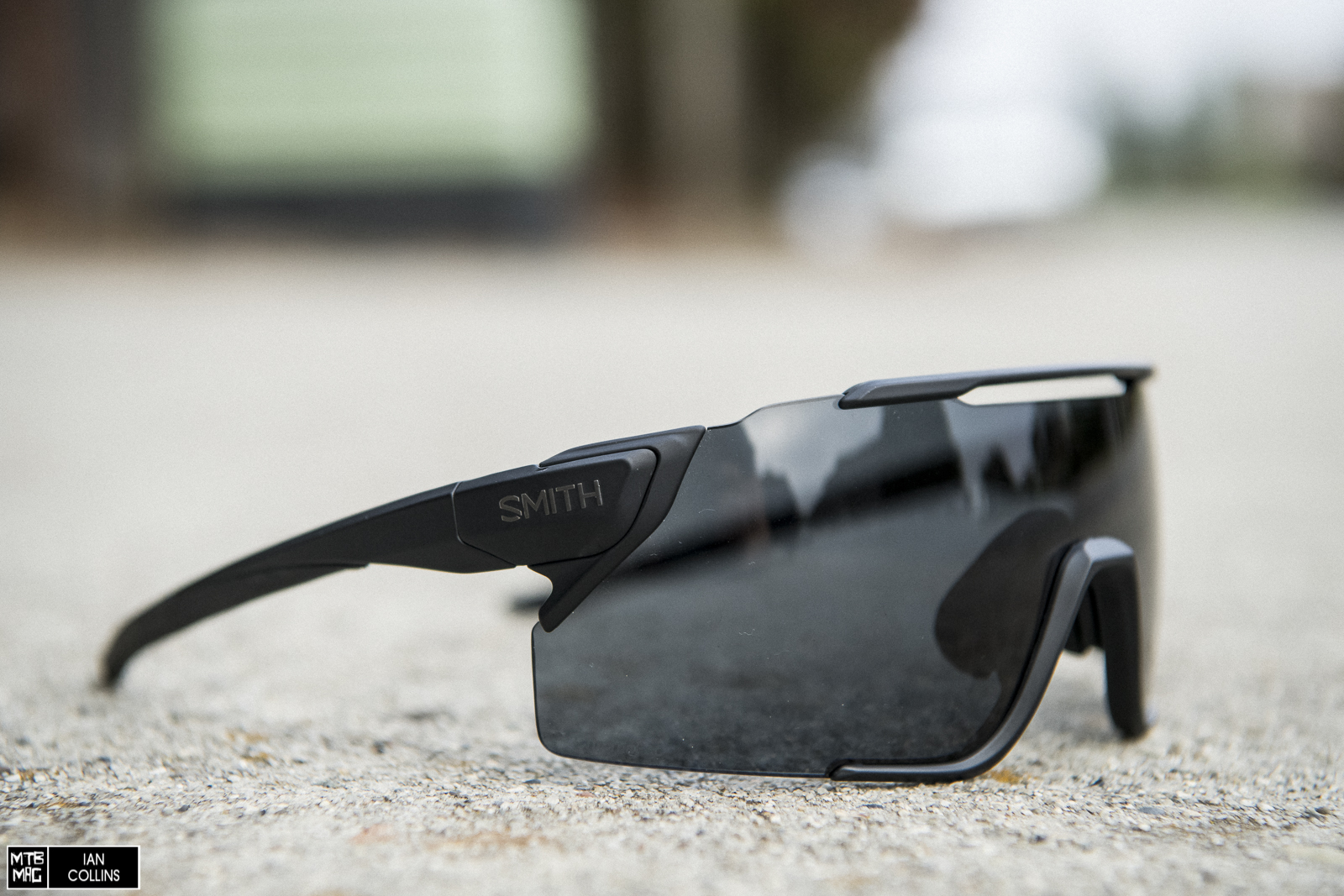 The Chromapop black lens is ideal for bright, mid day riding out in the open. It cuts a great deal of glare. It’s worth noting that Smith also offers a photochromic (read: transition) lens option that changes depending on light.

Since most of the testing occurred in the Santa Cruz area, we mainly used the rose colored lenses as the woods here are in fact quite dark. In terms of tint, they were just right for the majority of our riding, outside of very early mornings and late evenings where a clear lens would be ideal. With that in mind, we’ll be reaching out to Smith to test out the photochromic transition lens out of curiosity. Optically, the lenses are both razor sharp, offering incredibly good clarity with zero distortion. Since the trails here are either quite loamy, dusty or some combination of both, the expansive coverage of the Attack’s proved to be an excellent alternative to goggles. They offered better protection than the average glasses, but weren’t as cumbersome or annoying as a set of goggles. On our testers rather average sized head there were no quirks in terms of fit – the lenses didn’t butt up against cheek bones, and the top didn’t butt up against his forehead or helmet. 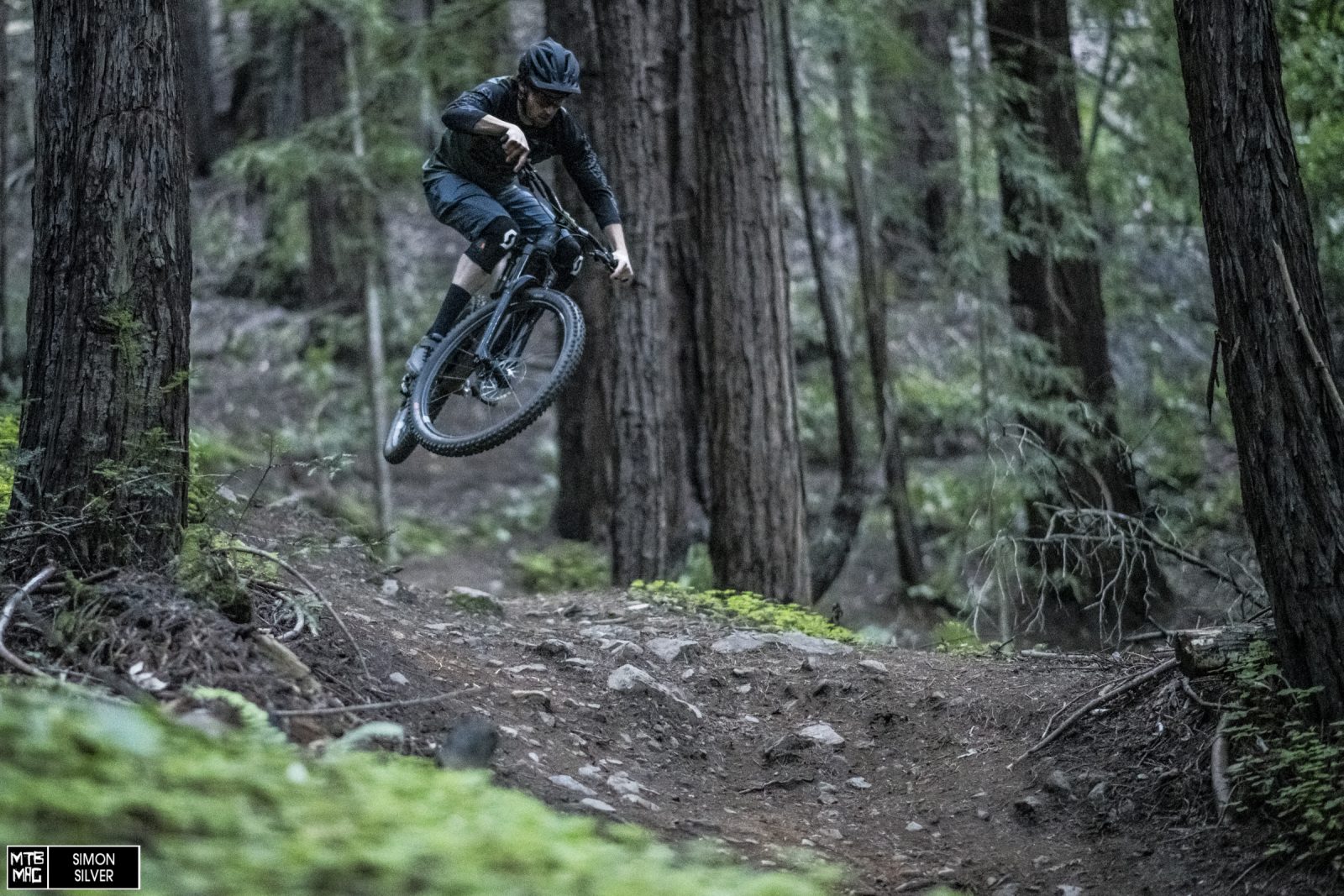 It’s always interesting to see how well a set of glasses (particularly their arms) play(s) with a helmet, and while there’s no doubt that the Attack would work quite nicely with a Smith helmet, they also worked admirably with the Bell Sixer and Troy Lee Designs A2 that they were mainly paired with. The actually arms seemed best tucked under the retention system, not below it. Their soft material and low profile nature made them an afterthought on the trail. The Attack managed fog fairly well – at least on par with anything else, which is impressive given how much more they cover your face, leaving less room for air flow (and less room for dirt to squeak through and spackle your eyes). Although in stock form the glasses worked well, a bit of Cat Crap is the best thing you can do to prevent fogging. As you’ll see at the link, it’s not actual cat crap, but rather a genius anti-fog that skiers have using for ages.

At the end of the day, the Attack are truly excellent glasses – it’s hard to find a single flaw in them. Like anything, you may want to try them on first to ensure they work with your facial profile. That said, if you’re looking for set of glasses that give you near goggle level protection without the hassle and complication that comes along with combining goggles and half lids, you’d be foolish to not give these a look. They are a touch on the pricey side, but the fact that they come with a second lens to help cover a broader range of light conditions helps. That it’s stunningly easy to switch out lenses is the cherry on top.