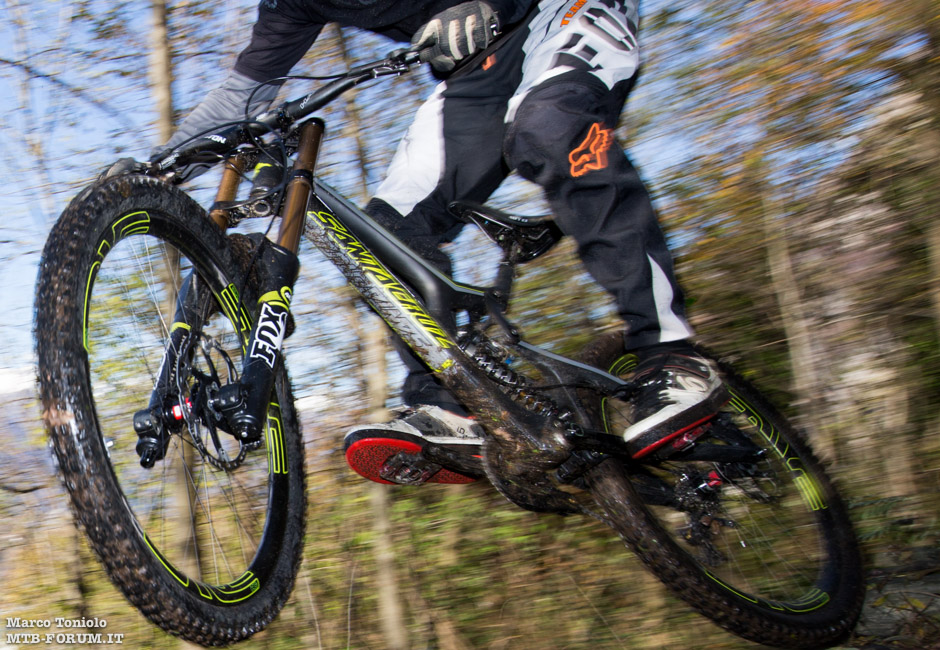 Marco Milivinti (DH worldcup racer who finished 13th at Champery 2011) from MTB-Forum.it had exclusive use of the new, 2013 Santacruz V10 Carbon for a 30+ day test. Here are the results!

Trying out the world champion’s bike always has a certain fascination. In addition, this V10 is a beauty, with its armonic, clean lines and refined details in its aesthetic as well as its practical aspect (for a detailed presentation of the bike, click here).

The attraction of the yellow graphics on the rims and the fork decals is a first-class touch. The designers added protection to the frame with a molded rubber swingarm and downtube protectors and integrated fork bumpers with cable guide.

The rear suspension takes advantage of the VPP system with two links that connect the front triangle and swingarm. From an esthetic point of view, the upper link made of carbon fiber is spectacular, just like the grease ports in the lower link.

The components are top of the line with Fox suspensions and Shimano (Saint brakes and transmission), Enve carbon wheels, Maxxis tires, and Easton handlebar. Only the cranks delude a bit because I had expected the new Saint or Sram XO. In addition, a bike of this caliber (and price) is missing a titanium spring on the standard spec.

The geometry of the bike is modern but not exaggerated as on the Specialized Demo or the Mondraker Summum. The evidence of this is the head angle which varies from 65º to 64º based on the position of the shock, but also on the interaxial distance which, for the Medium size, varies from 1173mm to 1178mm.

From the start, with the first few downhill meters, we see how the V10 provides its rider with a certain amount of familiarity: both suspensions immediately work well without any breaking-in period or particular adjustments.

In particular, the rear suspension does a good job absorbing well the small, successive holes as the large drops. It gives you a sense of security and invites you to increase speed. Simply fantastic!

The components of the “cockpit” are well laid out, in an ergonomic sense. They are all located in the right place and they function as designed, as expected from components of this caliber.

The bike is particularly silent and when you ride it hard you can hear the typical sound of a carbon frame.

The brakes are the new Shimano Saint, with a 203mm disc up front and “only” 180mm in the rear. They have superior braking power (even better than the Formula Oval) and, in addition to allowing you to brake a little later, they have great modularity. The rider can easily sense the feeling between the lever and the force applied on the disc in such a way that he is able to control the braking action, even in more difficult situations.

Together with the pads, on the caliper there are some small plastic plates that dissipate heat. I wasn’t able to understand if they are effective or not, but I never experienced overheating problems with either the front or rear brake. However, the plates make a disturbing noise during the ride.

Also, the pumps are not reversible; therefore, if one has to rotate the brakes, the brake cable must be detached. It’s a quick and easy operation but needs a bit of attention.

I really like the short brake lever. This allows you to carry out one-finger braking without moving the brake lever clamp too far to the center of the handlebar.

The  handlebar and stem are made by Easton. They have a new 35mm standard. The bar is 800mm long, has a very low rise and just a few degrees of backsweep. The stem has two positions: 45mm and 50mm. They are esthetically pleasing and are very low in overall height. On other bicycles this could be a strong point, but I believe that this frame needs something that raises the front chassis higher. Under the head-tube bearing cup a 3cm spacer was inserted to raise the handlebar to my ideal height.

By checking the photos of the Gracia and Team Syndacate bikes, we see that they also use this system to raise the handlebar. It seems that the bike settings require it.

The wheels give an added value to this bike. The Dt Swiss hubs are super smooth and the Enve carbon rims permit the coupling of a light but rigid wheel without worrying about a rim that can easily deform.

My impression from riding the bike is that the carbon rims contribute to reducing the small ground vibrations, making the ride even more comfortable.

In a curve, the V10 Carbon is definitely sure footed and even though it doesn’t have a super low bottom bracket, we are able to load the external pedal and corner well.

In the tight curves and in successive cornering the 64º head angle helps, while the 443.6mm length of the chainstay makes the bike less reactive.

Fast, wide corners are the perfect terrain to highlight the bike’s qualities because, as a result of its front and rear suspensions and its geometry, it maintains good traction, permitting you to select the best trajectory.

I want to say that the more the terrain is rough and irregular, the more fun is derived because this bike simplifies riding. It allows you to dare and push your limit further down the road.

On loose ground the wheels remain anchored to the terrain; we are able to brake later and corner better.

Maybe the bike’s overall lightness makes hopping across holes easy, allowing me to create small doubles along the path: it’s a load of fun.

I prefer to keep the rear shock at 8.5 inches  because the bike is more agile and ready. Using 10 inches results in the bike being sluggish and less responsive, even though the travel is infinite! In addition, at 8.5 inches the steering opens up, it lowers and lengthens. It’s just a few centimeters but they make a lot of difference.

Personally, I would prefer having a bike with a 10 inch suspension while maintaining the geometry of the bike set up at 8.5 inches.

From a bike that excels on rough terrain one doesn’t expect the max in pedaling. However, the V10 Carbon darts off under the pedals in a way that is pleasing. This could be due to its lightness, the wheels, the vpp; probably, it is due to all these factors.

Even the jumps are a selling point for the bike. From the beginning one has a sense of familiarity and confidence in air. One can move as one pleases, being able to jump a little further or a little higher than normal.

The rear axle has a spacing of 157mm. This should favor removing/mounting the wheel, but I didn’t find a significant difference when comparing this to the classic 150mm length.

I substituted the original spring on the Fox suspension with a stiffer one because the original one was to soft for me (80kg).

When shifting from the 8.5 inch setting to the 10 inch setting, a spring that adds 50lbs of tension is better.

The Morsh mudguard is simple and efficient, even though I prefer the classic mudguard that is mounted between the fork legs.

Finding minus points is difficult with a bike of this caliber: the frame and the suspension set up is untouchable, maybe some components can be improved.

Some riders would like to have the opportunity to change the head angle or the rear suspension travel independently of other settings, but maybe this is asking too much!