Why would someone travel over 11,000 kilometres from his home in Austria to the Atacama region in Chile just to career down a mountain on a bike? For a world record, of course! 42-year-old Austrian downhill biking expert Max Stöckl achieved just that by cycling down the gravel on his standard mountain bike after years of preparing for the feat. His V-Max project came to fruition with a speed of 167,6 km/h being recorded around midday on 13 December 2016 on the 1200-metre long slope. His six-person team took some spectacular images back home along with their pride at creating a new world record. Hunting the perfect speed. Max Stöckl from Oberndorf, near Kitzbühel in Austria, developed his passion for downhill mountain biking over 20 years ago. Infected and driven by the speed virus, he raced his way to his first speed record on snow in Les Arcs in 1999. The Austrian then beat his mark of 187 km/h in the Chilean Andes in 2007 with over 210 km/h! Having done everything he could on the snow, he then moved his focus to gravel slopes. In 2011, Max bombed down the volcanic cone of Cerro Negro in Nicaragua at 164.95 km/h. The downhill biking expert reveals that straight after setting this world record, he started to think about the V-Max project, saying: “The run wasn’t fun enough – it wasn’t a real challenge. When I came back home from Nicaragua, I started right away to look for a new mountain to ride down. We found that here in Chile.” One man with a special suit and a mountain bike. The Atacama Desert on South America’s Pacific Coast is one of the driest regions on the planet. No plants thrive there, and instead there are boulders and stones as far as the eye can see. This kind of unhospitable environment provided the ideal conditions for Max Stöckl in his mission to go even faster. To quench his thirst for speed, he chose a standard mountain without a name, with a summit at 3,972 metres altitude, ideal wind resistance in the surroundings, a 45-degree slope at the start area and a 1200-metre long course. The 42-year-old says, bluntly: “I wanted to have the chance to ride my bike really quickly again.” In December 2016, after two years of intensive preparations, the Austrian finally travelled to Chile with a six-person support team to set a new world record on the gravel. To make him as safe as possible, he had a special suit, an airbag – like the ones ski racers use – and a self-made helmet in two parts. That was all, when it came to high-tech gear, however, as Max Stöckl says: “My idea of downhill mountain biking is that you should be able buy everything in a shop. That means I don’t want any special parts on my bike. It should be a bike – not a motorbike without an engine.” 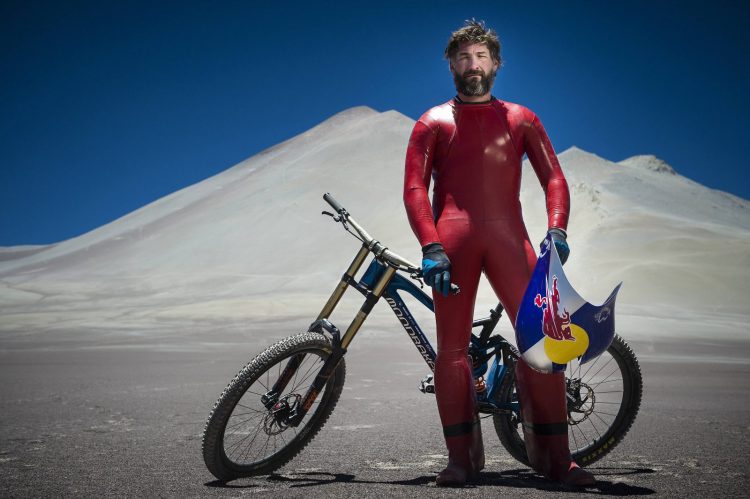 It gets really thrilling above 160 km/h. The speed expert’s eyes light up as he describes the V-Max project: “It’s important that it feels like an adventure. We are travelling to another continent, heading into the desert for countless hours, sleeping in tents under the mountain with a good bunch of guys – it all makes for so much excitement.” Out in the desert, the Austrian had to prepare the slope before taking his first training runs down it. Max carefully felt his way up to the summit of the mountain: “You never know what is going to happen from a start point before you try it.” The downhill biker first tested the slope in a series of slower runs to get to know the route and find the ideal line. He says: “As soon as I feel safe, I ride right from the top. When you’re cycling above 160 km/h, each and every extra kilometre per hour requires an enormous effort. If you want to get an idea of the air resistance, you only have to stick your hand out of the car window when you’re driving at 150 or 160 km/h. This force has an impact on the bike and the entire body. Even though I’m no weakling, physically it is something that I have to contend with too!” 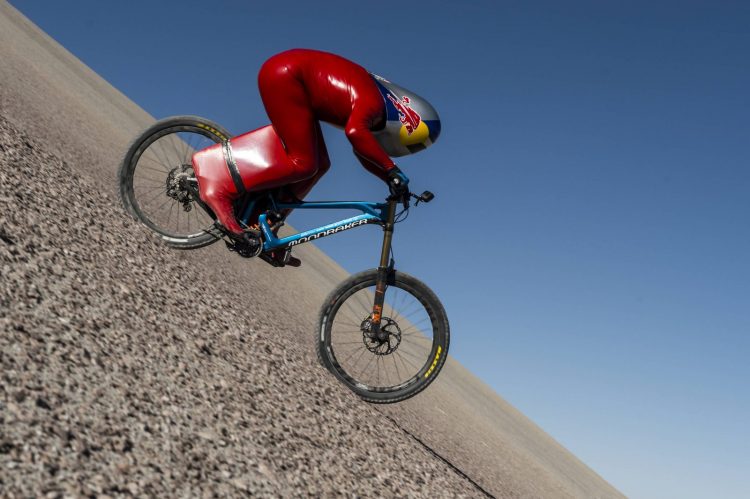 Emotional moment. After completing eight test runs, the Austrian was ready to speed through a perfect final run on 13 December at 11:35 local time, clocking up a speed of 167,6 km/h on the saddle. It took the new world-record holder eleven seconds and 650 metres to reach his top speed. The 42-year-old was overwhelmed – and completely out of breath – straight after his daring run, saying: “We were working for two years to be on the mountain on this day. We had tears in our eyes even at the start. It was really emotional. Now I want to go home to see my family and see my daughter grow up!” Perhaps the most special thing about Max Stöckl’s record is that he has achieved it without being a professional sportsman. He is an entrepreneur first and foremost, and runs his own mountain bike racing team, MS Racing. He was both relieved and delighted in summarising, saying: “It was so exhausting, even though the ride only lasted for 20 seconds. I just can’t express the feeling in words. Even if you know it is only going to be 10 or 15 km/h quicker than the last training run – standing up on the summit of the mountain, looking down and feeling the adrenaline was a very moving moment!” Starting from April 20, 2017, a documentary about the “V-Max” project is available on www.redbull.tv. 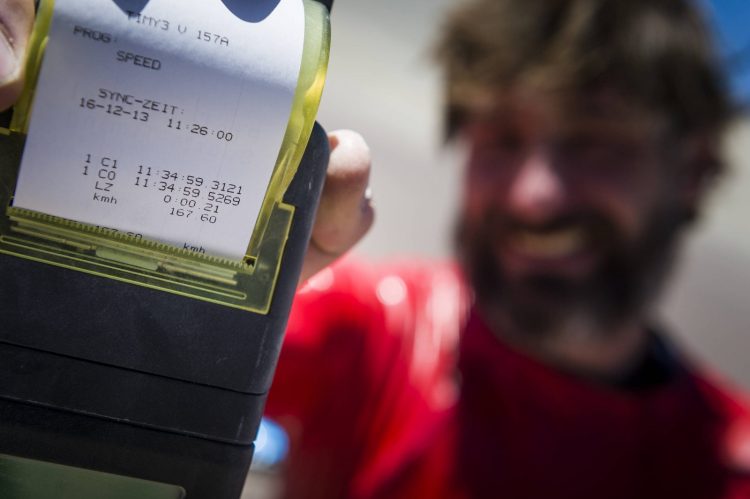