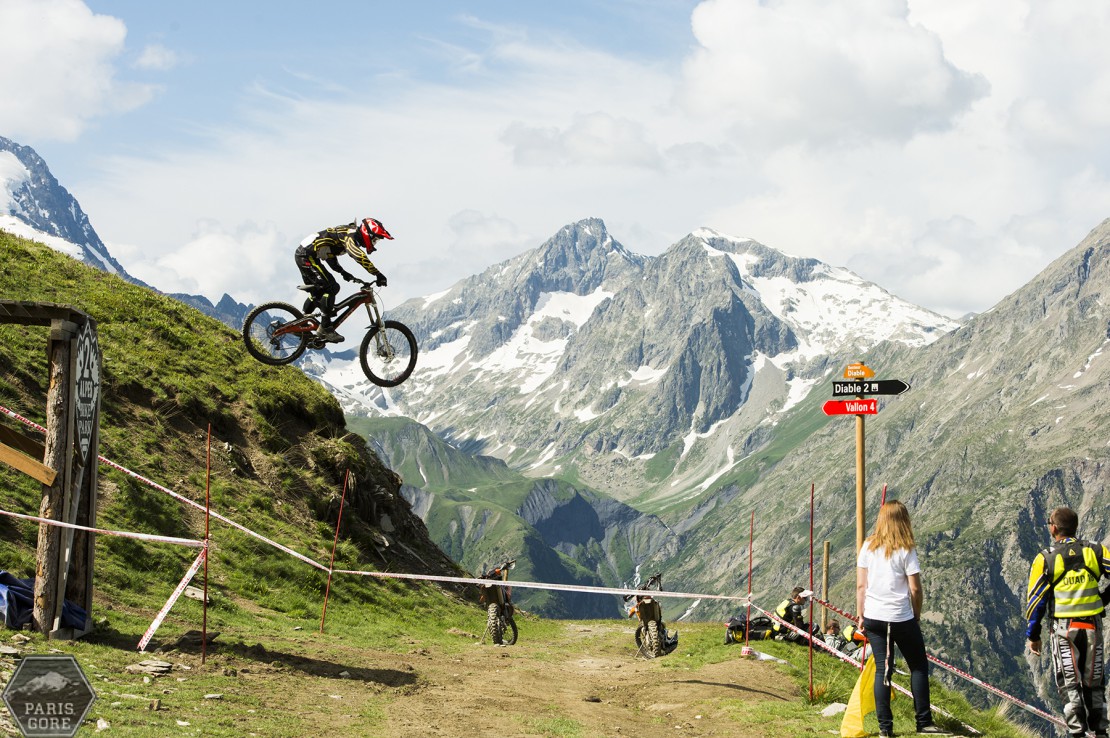 LES 2 ALPES, FRANCE July 2, 2014 – It will be a tale of two Athertons when the Polygon Air DH – iXS European Downhill Cup hits the dirt in Les 2 Alpes this Sunday – the first, the return of the men’s champ to the event he’s won every year since its inception, and the second, the absence of the women’s incumbent. Gee Atherton (GBR) is back and looking for his third consecutive win in Les 2 Alpes, while his sister Rachel Atherton’s (GBR) absence opens the doors to a new chapter in Crankworx history. The event has also undergone some changes for this year, leading to higher-than-ever registration numbers and bringing global spectators in on all the action.

Since Crankworx downhill racing came to Les 2 Alpes, the GT Factory Athertons have been unstoppable. Gee and Rachel both sat atop their respective Crankworx Les 2 Alpes podiums in 2012 and 2013.

“Its a great course and I love to ride it,” says Gee, of what keeps him coming back. “There’s different challenges every year, in fact every run, as the track tends to change a lot with the weather. It’s tough, it’s physical and it’s technical.”

So far in 2014, the two-time champ seems on track to continue his Crankworx winning streak. He currently sits at number one in the UCI rankings, but it’s not a number that he’s allowing to distract him.

“I try to treat every race on it’s own merits and not dwell on anything that’s gone before – whether it’s good or bad and wherever I stand in any rankings – It’s what you can deliver on the day that counts.”

“I needed a solid result after the terrible luck at the past two world cups with flats,” he says of the top 10 finish, which bested Atherton’s 12th place. “Being ahead of Gee at any race is never a bad thing, is it. His results speak of for themselves.”

Another rider who’s had a strong 2014 has one advantage that may give him that certain ‘je ne sais quoi’ come race day – Commencal Riding Addiction’s Remi Thirion (FRA) will be riding on home soil.

“I am used to riding in my country…for me it’s a pleasure,” says Thirion, who finished in the top 10 at Fort William earlier this year. “I have the French public with me – it’s very gratifying to have them cheering.”

The French-soil advantage is something that may also benefit one of his teammates – Myriam Nicole (FRA) is currently ranked fourth in UCI points.

“I am for sure feeling more confident after two good results,” says Nicole of her third place finish in Leogang, and second in Fort William.

For the women this year, Rachel Atherton’s absence from the playing field leaves a space atop the podium that many others are hungry for. In addition to Nicole, Hutchison UR rider Tracey Hannah (AUS) is racing fast and strong this year, with top 10 finishes in both Fort William and Leogang and a current UCI ranking of sixth.

Overall, over 300 riders have signed up to compete in this year’s race. Organizers say these numbers are a possible by-product of the race’s addition to the iXS European Downhill Cup circuit, making it the only French portion of Europe’s premier race series. Gee argues it’s something more:

“This is the only iXS that I’ll race this year. It’s the fact that it’s part of the Crankworx festival that makes it so special – the atmosphere here is always amazing.”

The rest of the world will also have the chance to get a feel for what Gee is talking about. The event will be a part of this year’s live broadcast schedule. All the action for the Polygon Air DH – iXS European Downhill Cup goes live from 14:00-17:00 CEST on Crankworx.com and RedBull.com/bike.

For more information check out www.crankworx.com