Though the World Cup race circuit is popular as ever to watch and follow, it seems that these days, less people are actually riding downhill bikes. In a time where long travel bikes out at your local trails are far and few in between, we felt is was time to give the dual crown ‘Freeride’ bike some time under the spotlight. We set out to build up a visually intriguing machine, that in our eyes, is the ultimate freeride, bikepark, and all around  playful downhill bicycle. 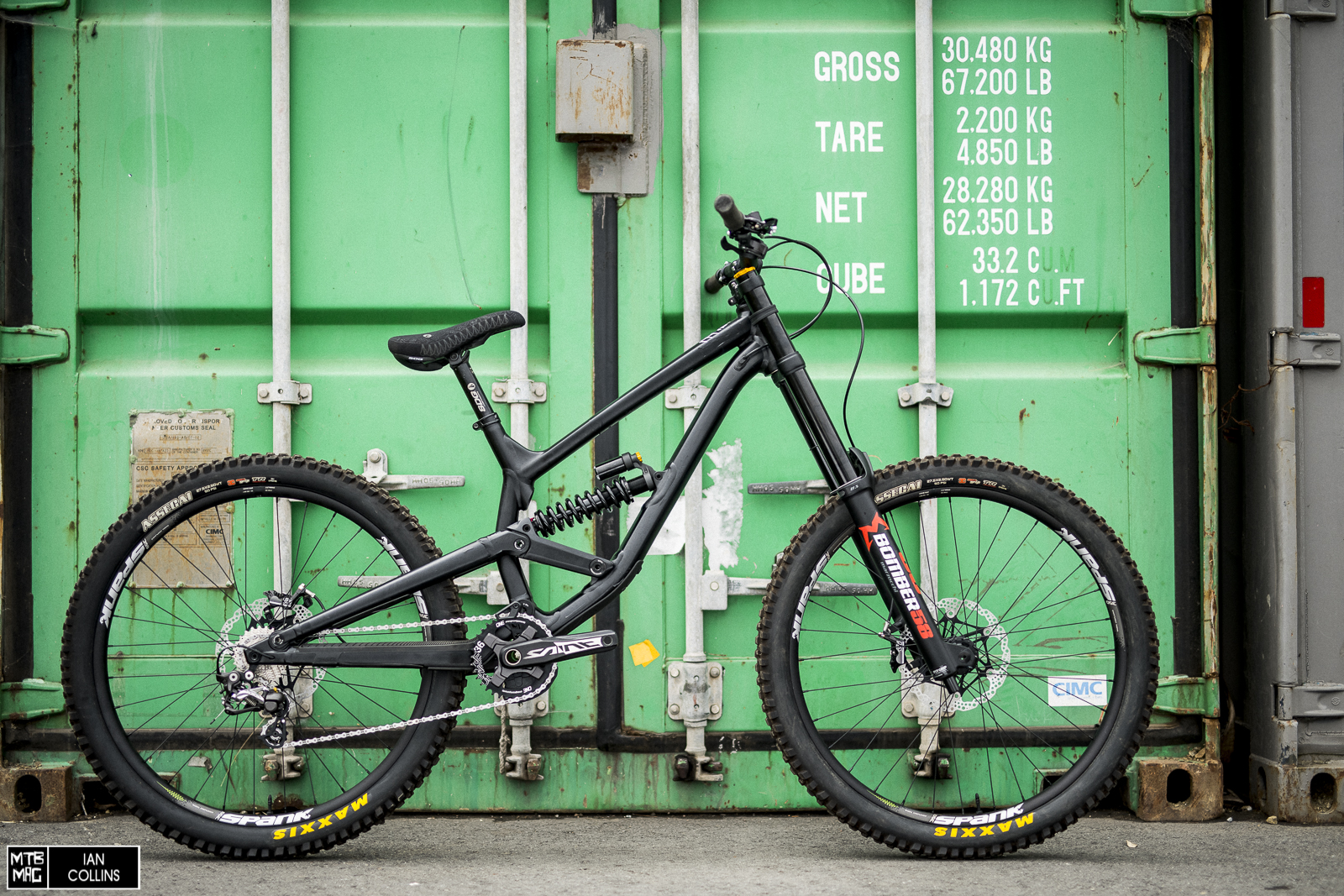 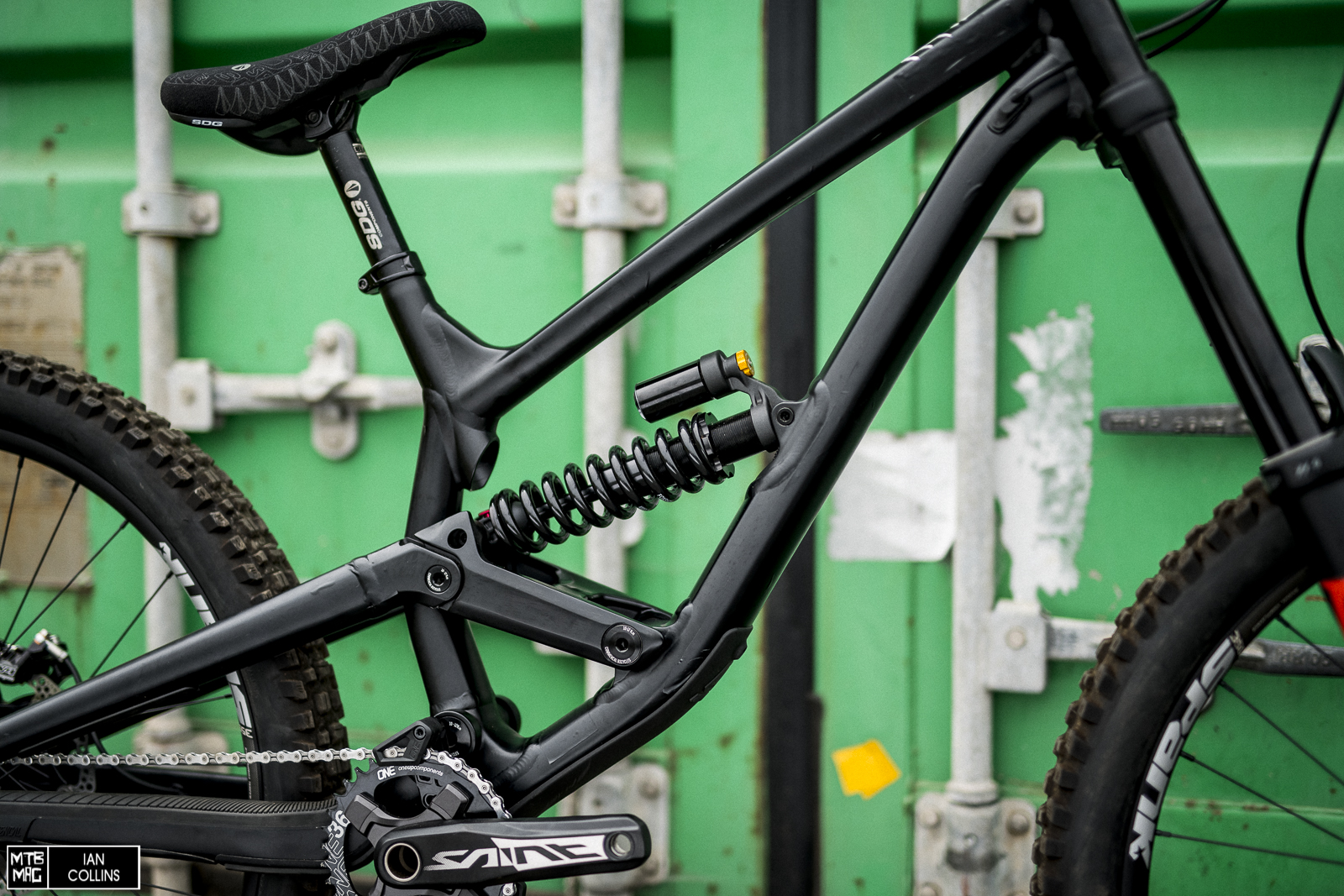 The build started with a black Commencal Furious frame, and some matte black vinyl to help achieve our dream of an 100% stealthy bike. We chose the Furious after enjoying its playful ride quality after reviewing the bike last year. 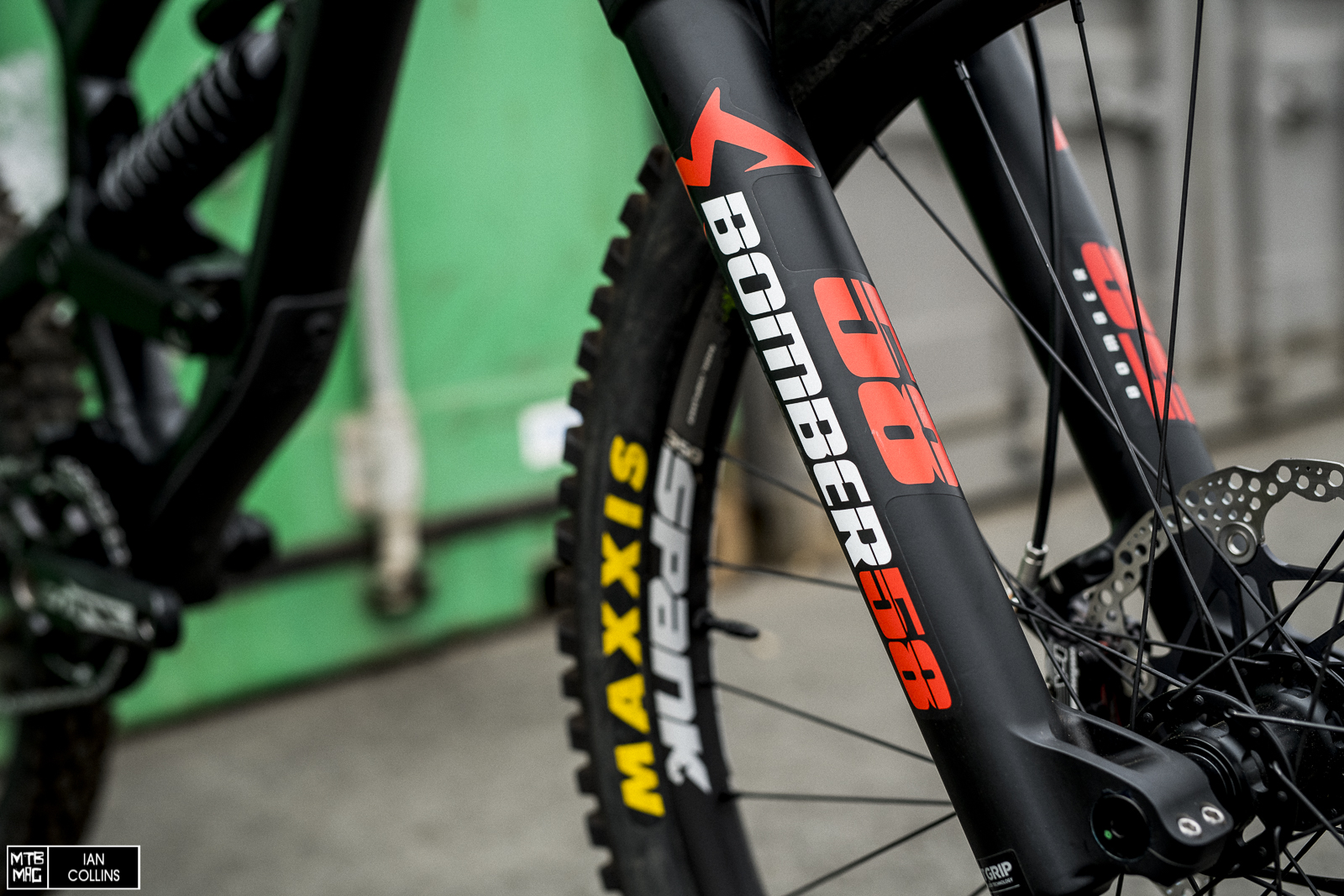 Paying homage to one of the first brands to support the early Freeride movement, and keen to mount up a fork that was all black, we opted for the new Marzzochi Bomber 58 fork. With a Fit Grip2 Damper, and similar chassis to the Fox 40, it was an obvious choice. A Bomber CR in the back features simple low-speed compression and rebound damping, it matches the fork, and we felt it would provide everything we’d need for a park bike. We are playing around between a 400 and 450 lb spring. 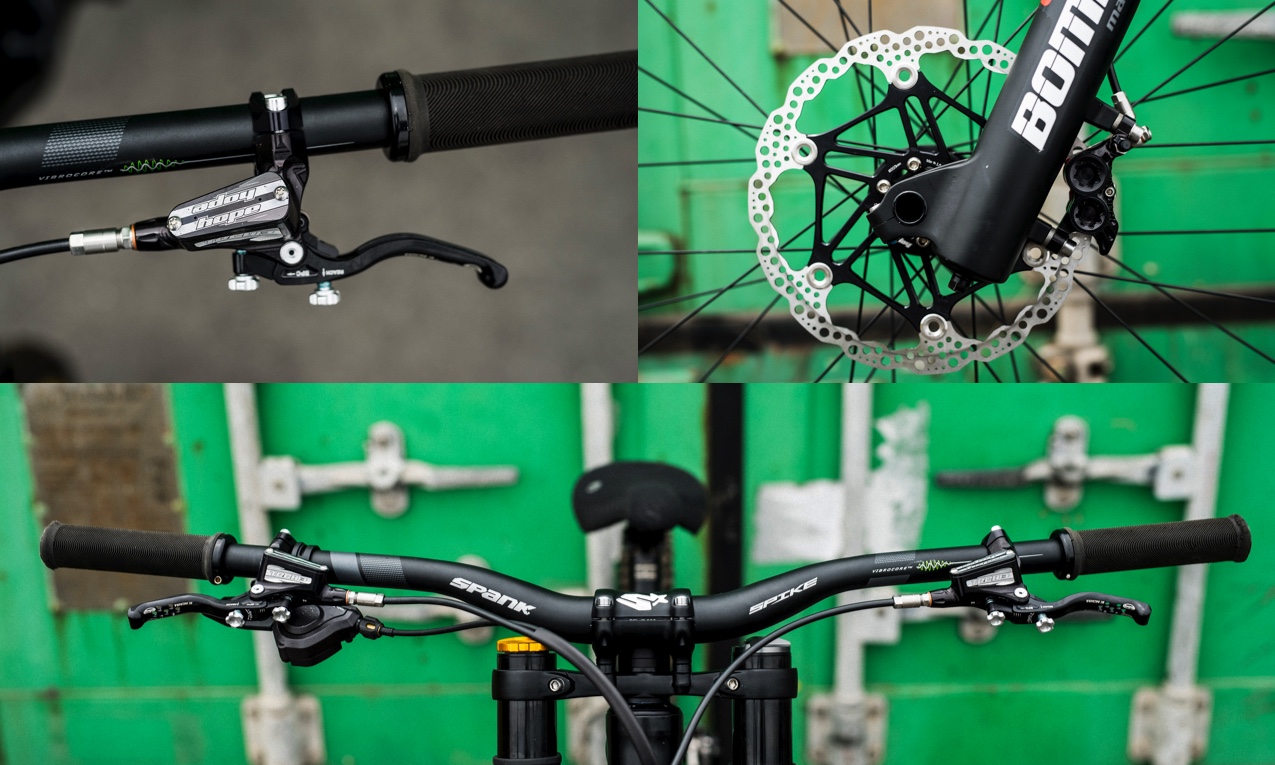 The Hope Tech 3 V4 downhill brakes feature lovely machining and anodized anodizing, 4 pistons for lots of stopping power, and a heat dissipating floating rotor. They are definitely a dream choice for us. Not only run by our good friends Cam Zink and Ray Syron, but just a dang good grip, we decided on Sensus Lites. 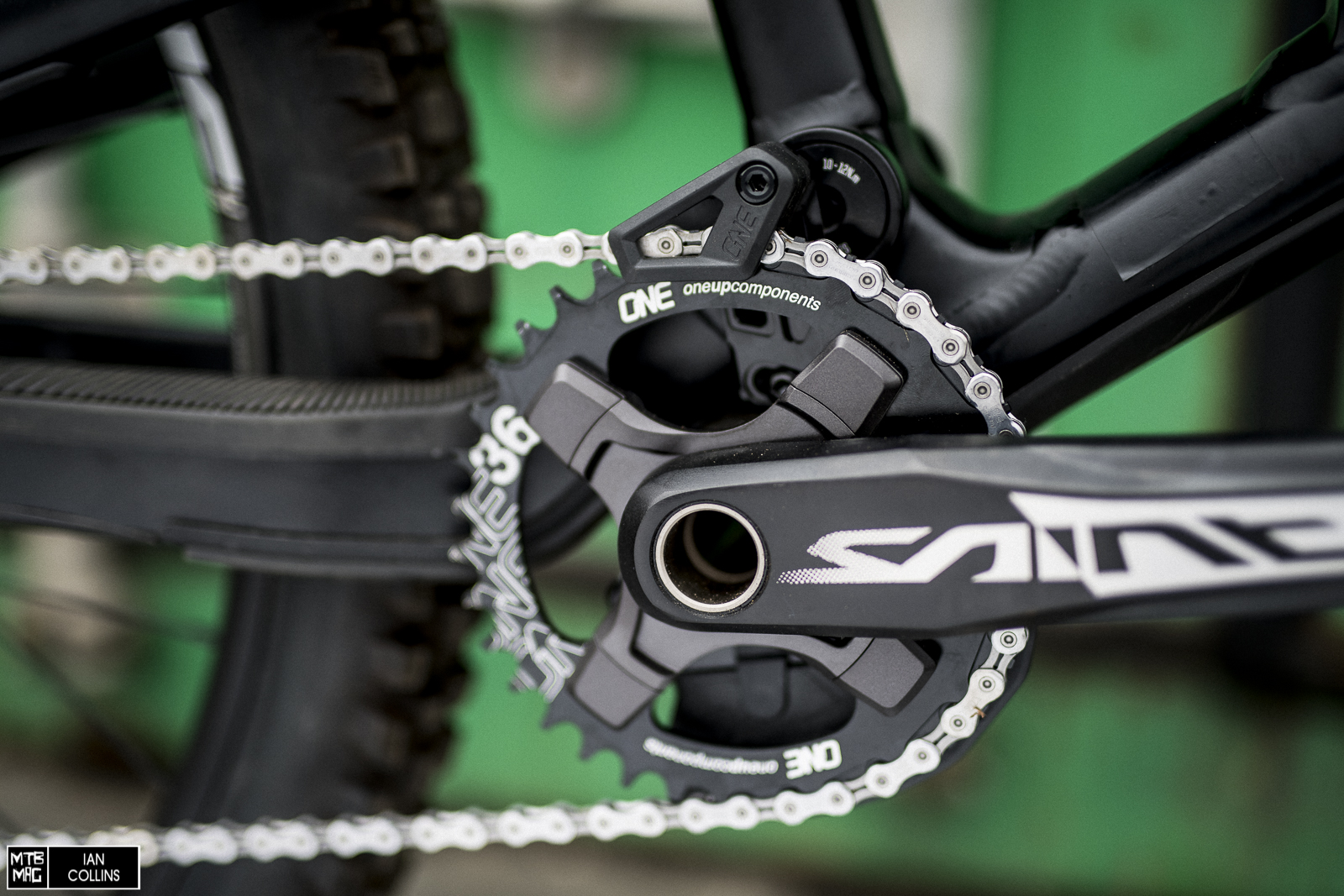 In need of some more black, we reached out to Squamish B.C. based OneUp Components, who were kind to get us set up with their new top chainguide w/ bashguard. The system is has plenty of adjustment, accounting for chainring sizing, and chainline path. The guys also set us up with a 36t narrow wide chainring to keep things in place in the rowdy terrain. 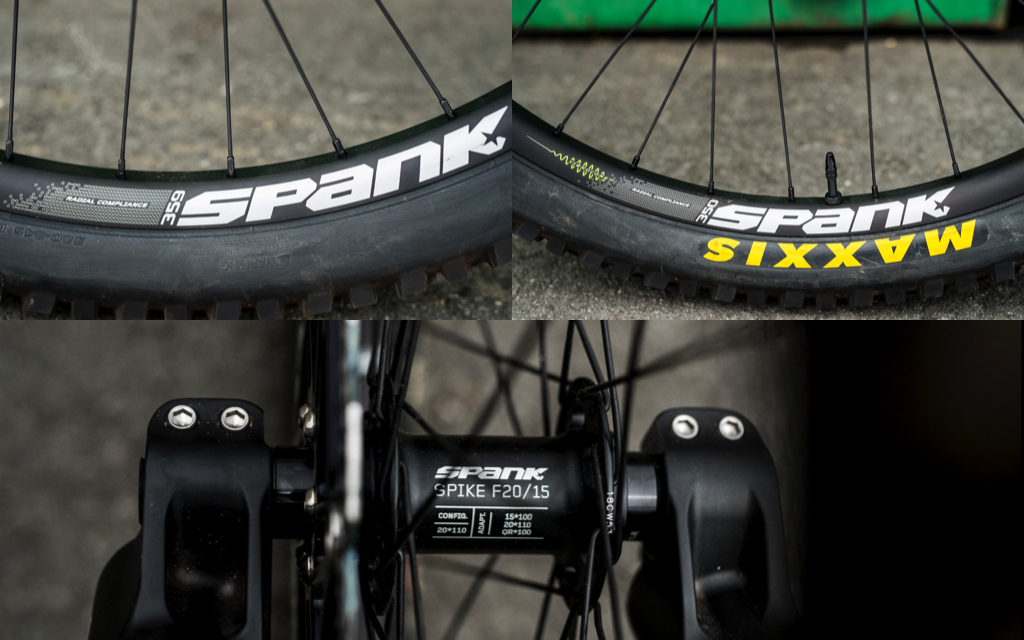 We found the Spank Vibrocore technology to be an asset on rough trails after we reviewed their Spike 350 wheel set last year. Spank sent us their newest DH tech: the Tuned 350/359 wheelset. The new wheels feature their ‘foam filled’ Vibrocore rims, and unique front and rear rim profiles/widths reducing weight in the front, and providing durability in the rear. Included black tubeless valves, and anodized valve caps were just the cherry on top. 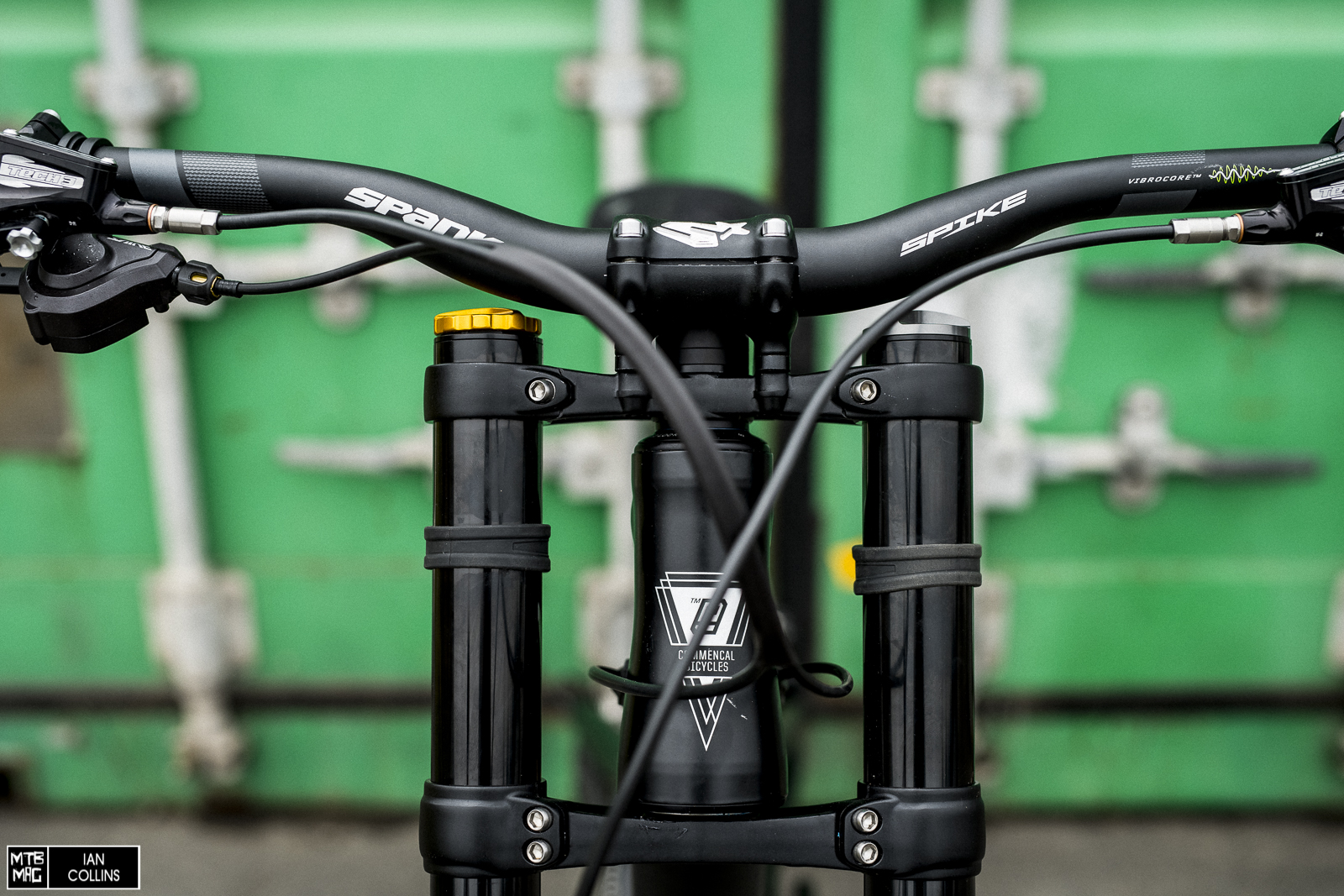 Spank Spike Vibrocore 30mm x 800mm handlebars, and an adjustable 25-30mm Spike stem round out the cockpit of the bike. We’ve yet to experience the Vibrocore technology in a handlebar, so we’re excited to try them out. 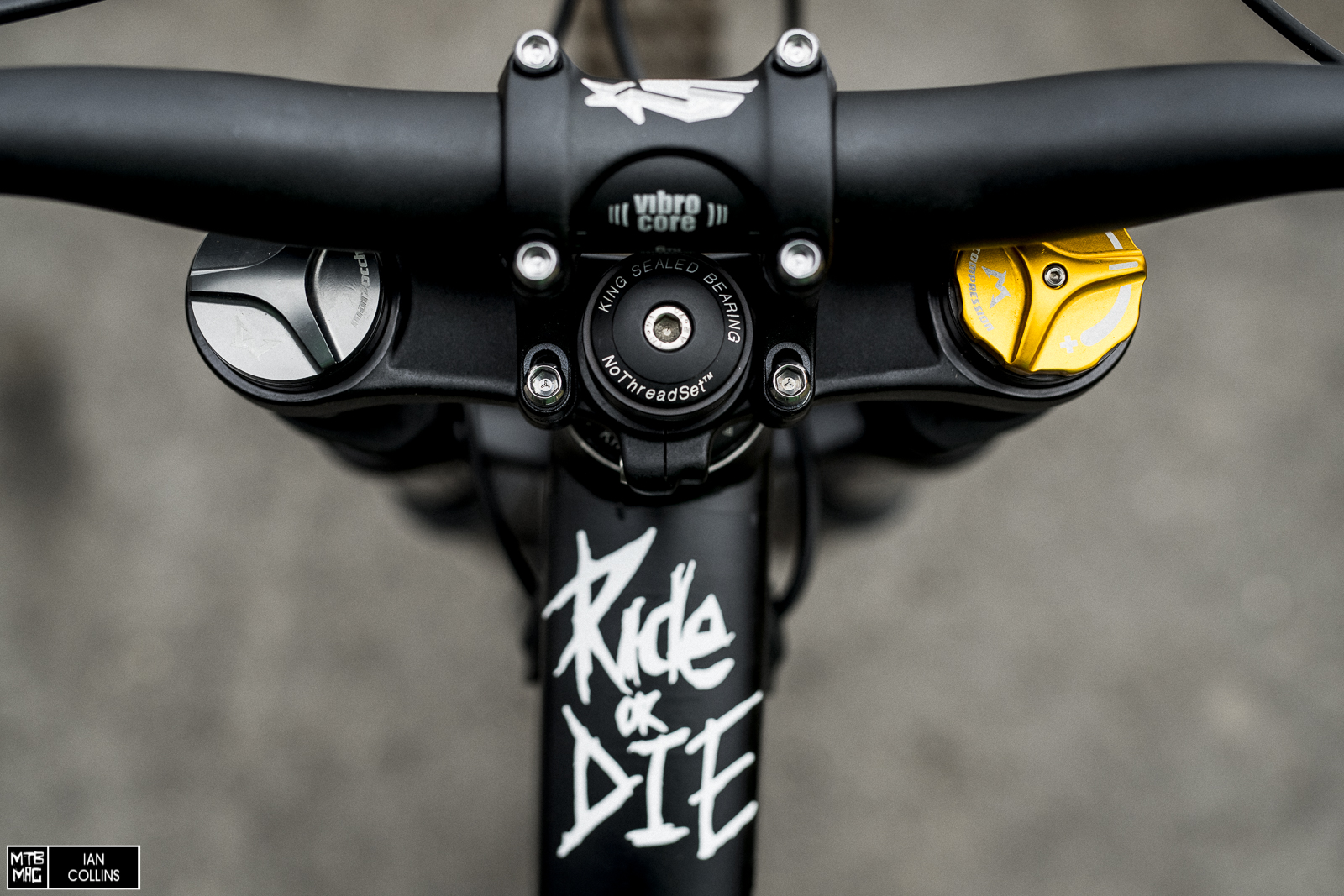 A Chris King top cap boasts the smooth spinning headset hiding below, and an obligatory Ride or Die decal keeps the fiery passion that is riding bikes burning. 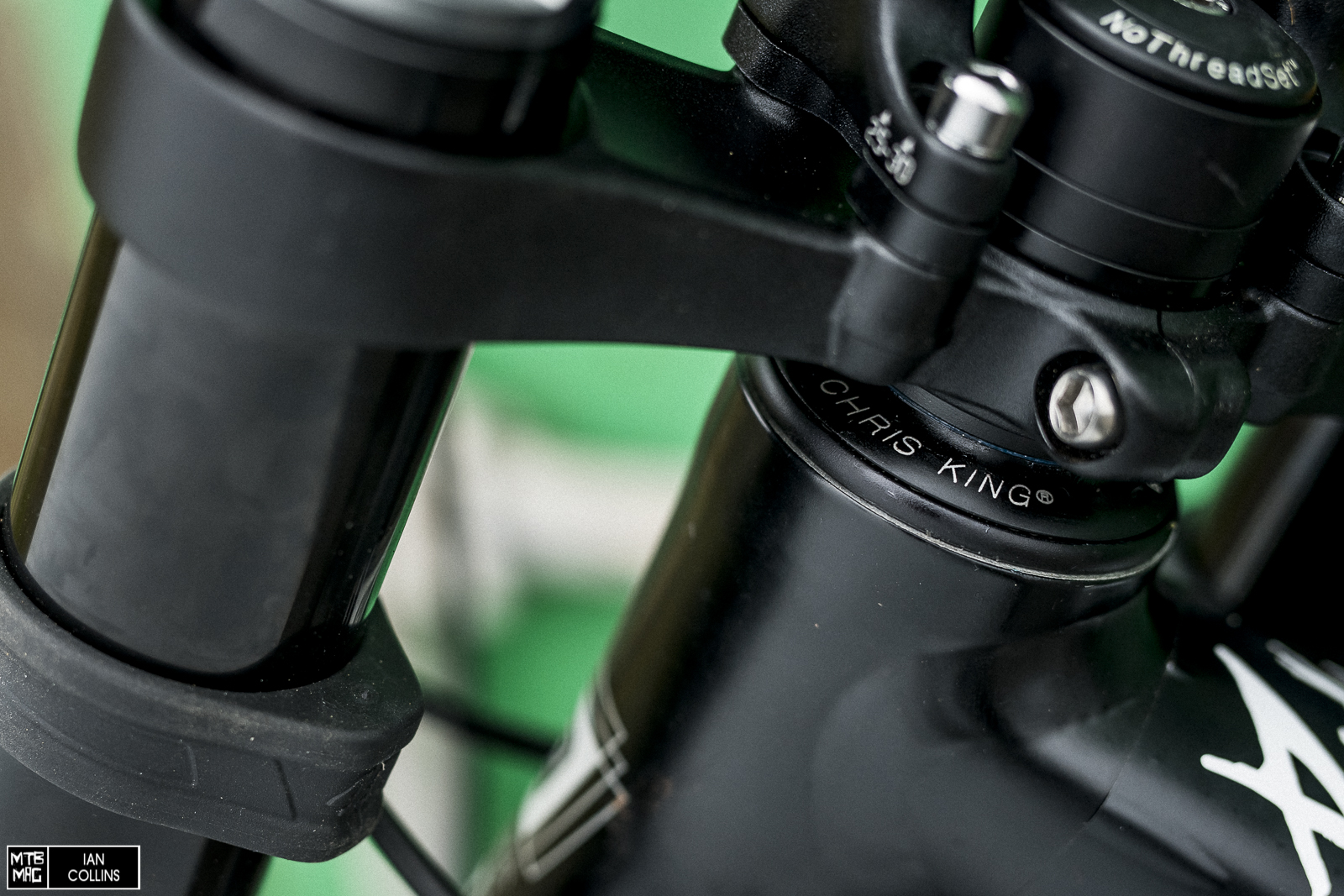 If there’s a higher quality, more drool worthy headset for a dream bike, we’re not aware of it. With a ten year warranty and legendary made in house bearings, King was the obvious choice. 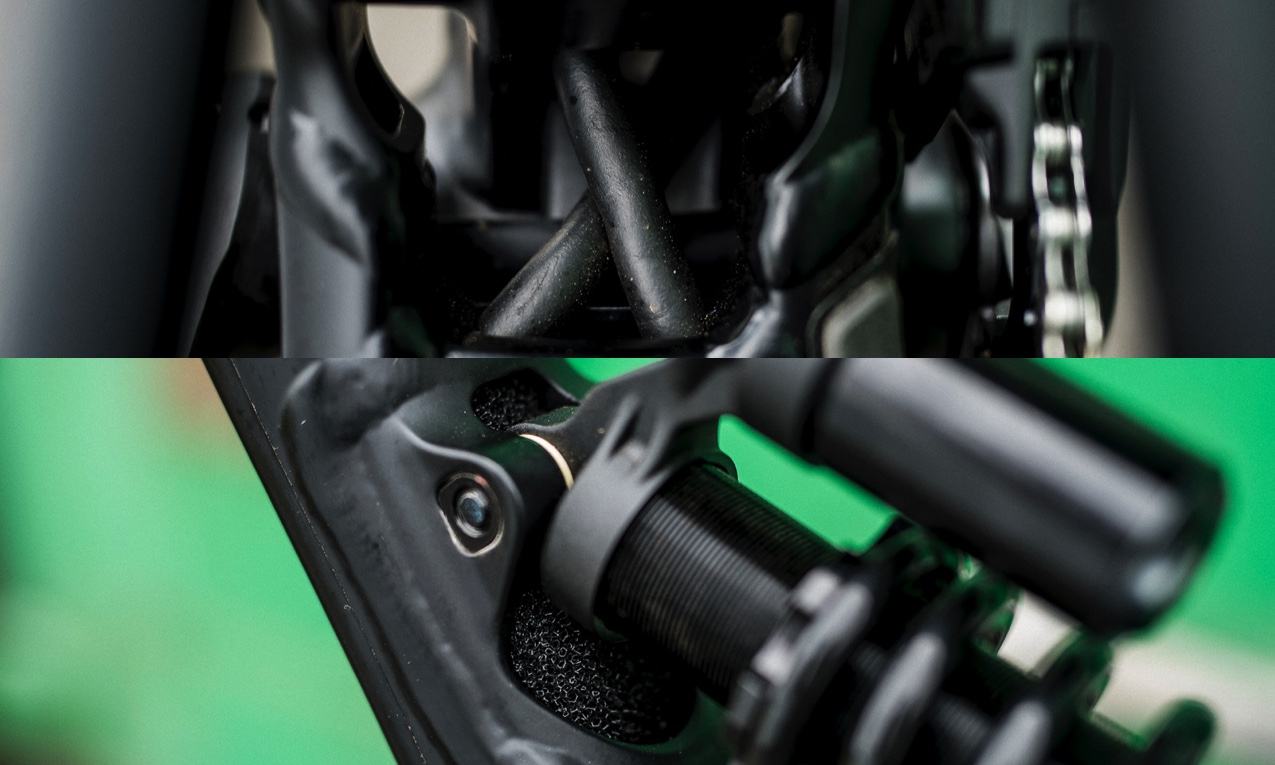 The subtle details of the Furious frame added to our reasoning for choosing it. Moto foam under the upper shock mount keeps mud and dirt out of your frame, while soft foam tubing encases the brake line and shifter cable while they transition from the downtube to the chainstays. 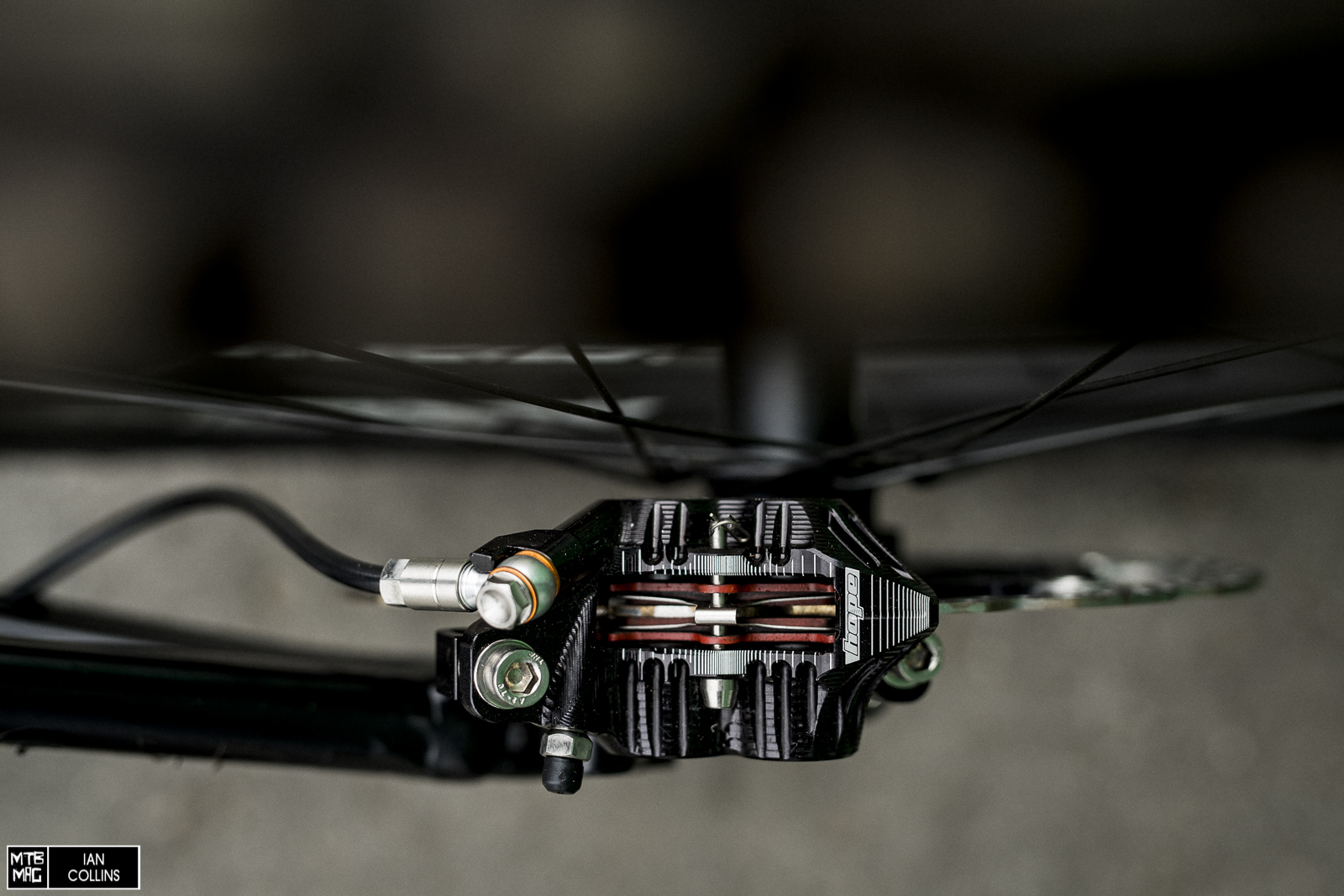 Apologies for the repetition of product, but if this shot of Hope’s precision machined brake caliper doesn’t make you feel a bit warm and fuzzy, do you you even ride mountain bikes? 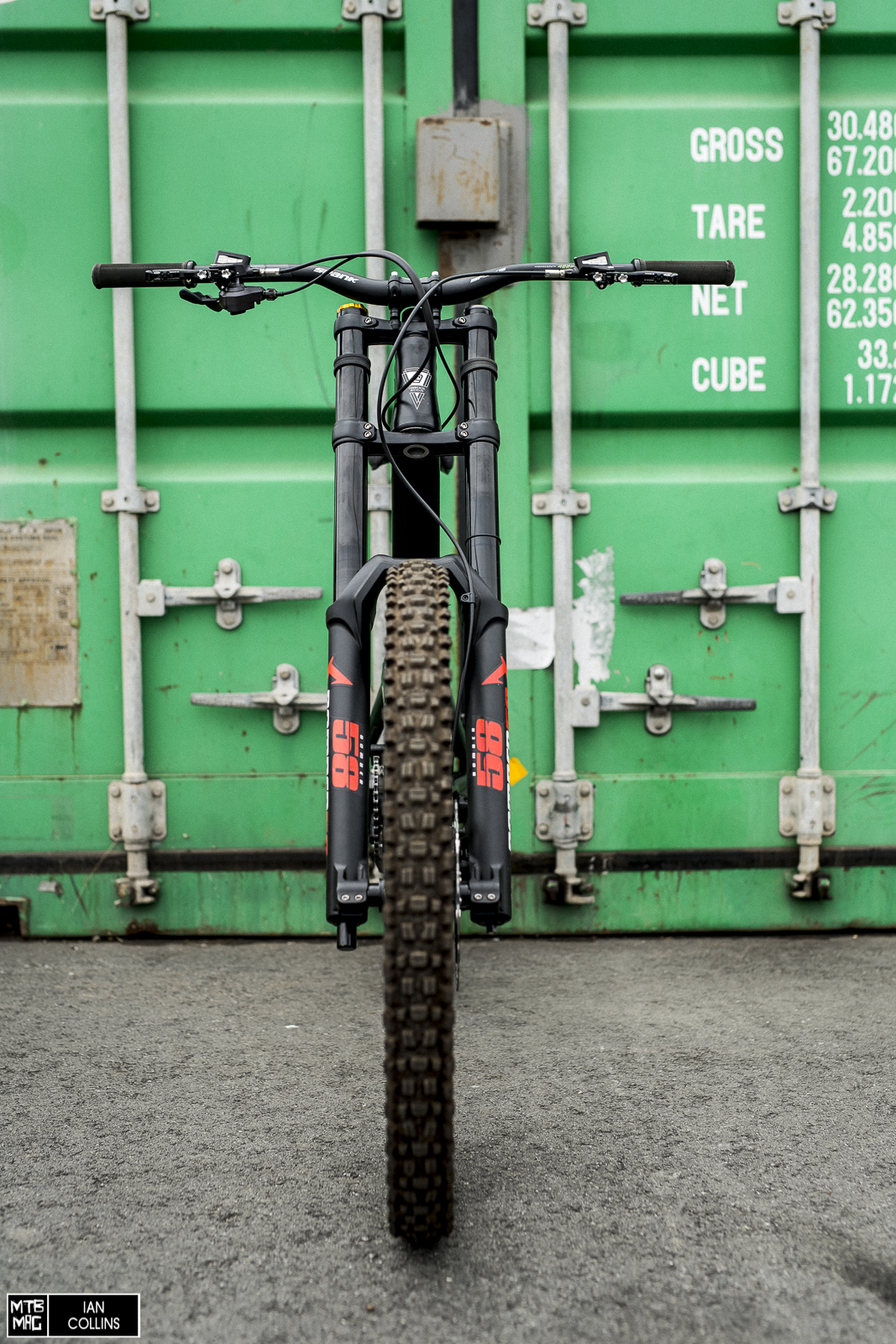 We wouldn’t want to come face to face with this weapon if we were another bicycle….

Thanks for following our dream DH build, we hope you like the stealth and utilitarian look as much as we do, stay tuned for a video aboard the bike.