In September, Commencal USA sent us out their mid-spec’d build of their Freeride oriented Furious, dubbed the Essential.  Featuring an intriguing matte green paint scheme and all black parts, the bike is an eye-catcher, with small details like having even the chain blacked out. SRAM/RockShox handle the suspension, brakes and most of the drivetrain.  E*Thirteen handles the rims, guide and cranks while Maxxis tires, and Commencal house brand seat/post, and grips round off the bike. Let’s dive in… 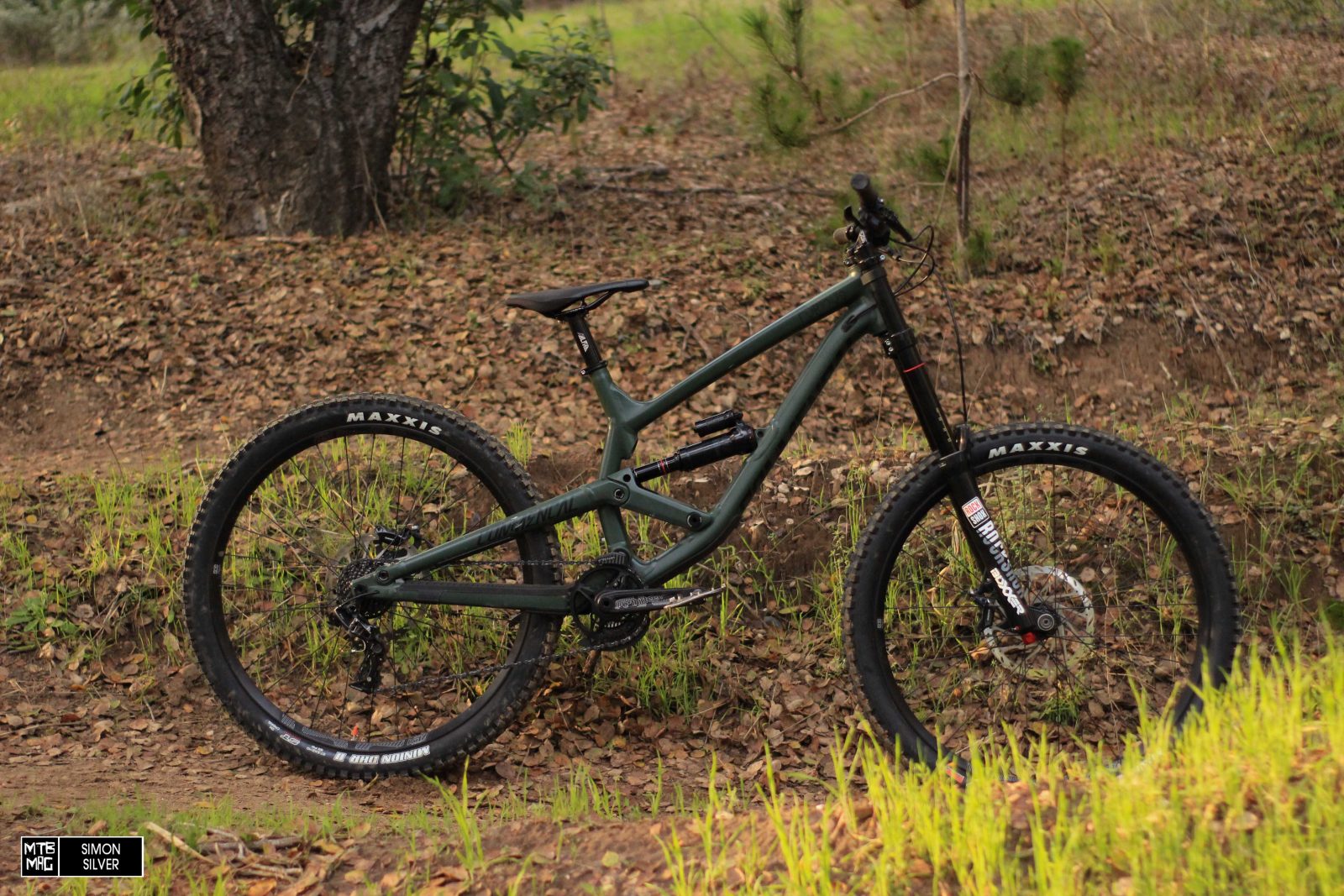 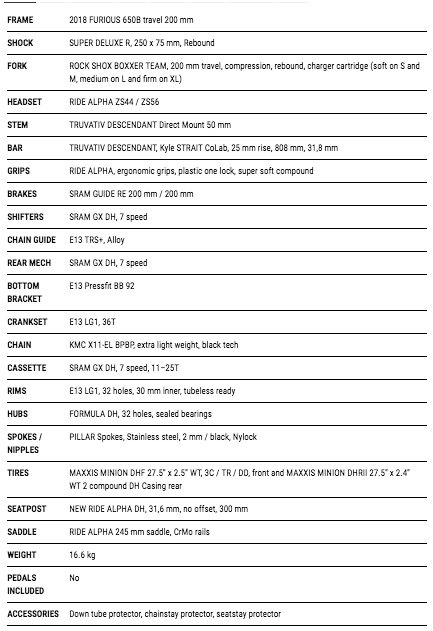 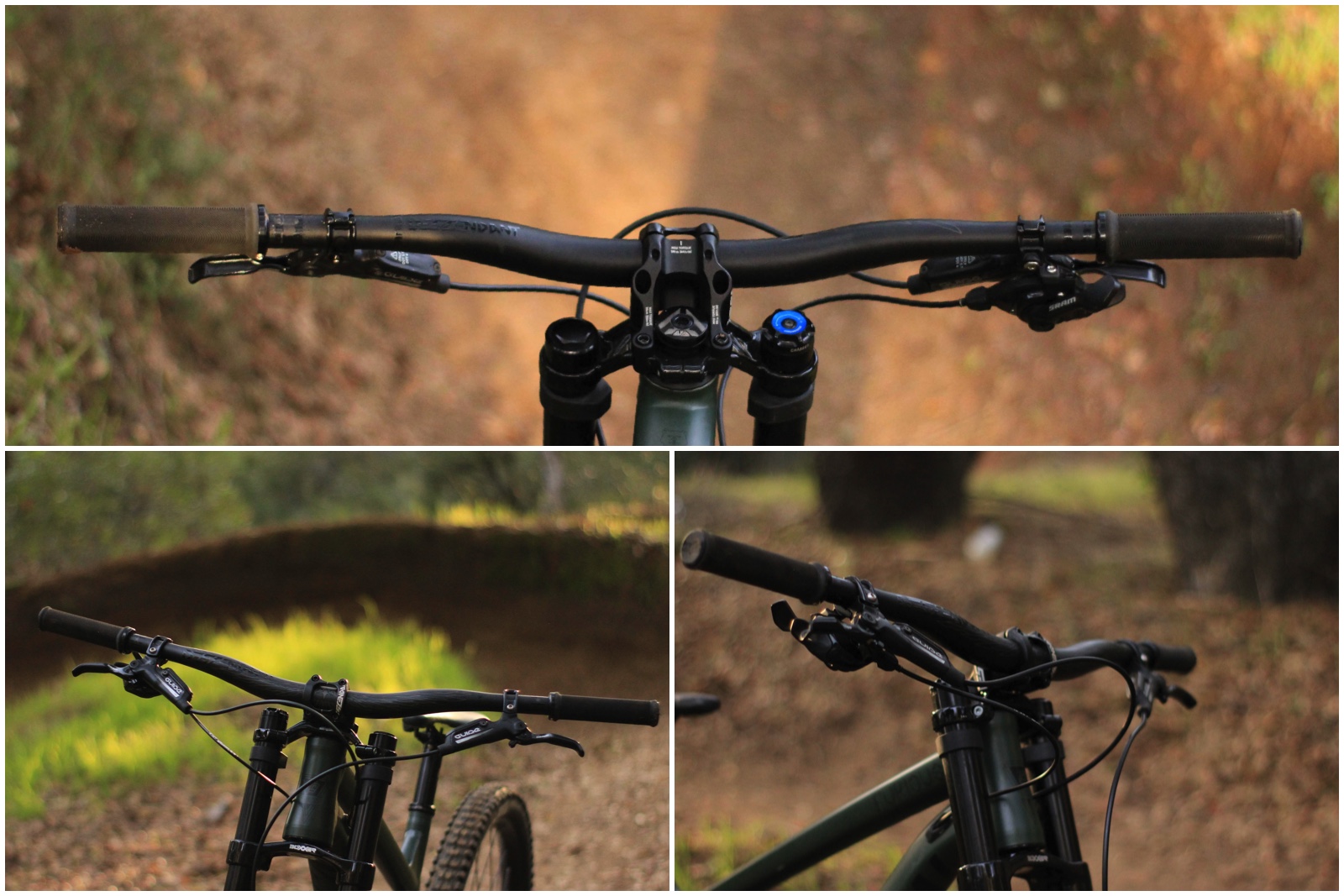 The cockpit of the bike is handled by a 50mm length TruVativ Descendent stem, which is simple and effective. The handlebars is Kyle Strait’s signature TruVativ Descendent, with 25 mm rise, 808 mm width and a 31.8 mm clamp. The bars are beefy to say the least, and we had to cut them down to 785mm to feel at home. We also swapped all the included stem spacers to above the crown, as the front end felt really high for us. The included Commencal grips have a single plastic lock ring, and are supposed to be ergonomic, but they were very slippery, and we swapped them for Sensus Lite’s. The Sram Guide RE brakes are a entry level offering designed around eBikes, thus, they feature a quite a bit of play in the lever bushings. The action and stopping power of the brakeset is adequate thus far, but we don’t see the levers lasting after one season of shuttling and rough DH laps, especially in a bike park scenario. The RockShox Super Deluxe R is a metric sized 250 x 75 mm, and only features rebound adjustment. It’s been widely recognized as one of the best air shocks on the market, and has worked well for this freeride bike, we just wished for high/low speed compression for some of the rougher tracks. With that in mind, it’s fairly simple to switch between 2 and 3 volume spacers with two spacers offering a more linear feel and three spacers to get a more poppy, progressive ride. The RockShox Boxxer Team is a coil sprung 200mm travel fork – oddly enough, it came with a soft spring on the medium frame we tested. Very rapidly we knew a firm spring was in order, and after swapping, the bike felt much more at home. The Boxxer Team features the renowned Charger Damper, and simple external beginning stroke rebound, and low speed compression. It’s been a reliable fork, and its coil sprung feeling is welcome on the long descents. The internal routing on the Furious is done very well, and in any nook that the cables typically touch the frame, Commencal has admirably wrapped them in foam, both protecting and more importantly silencing the bike. 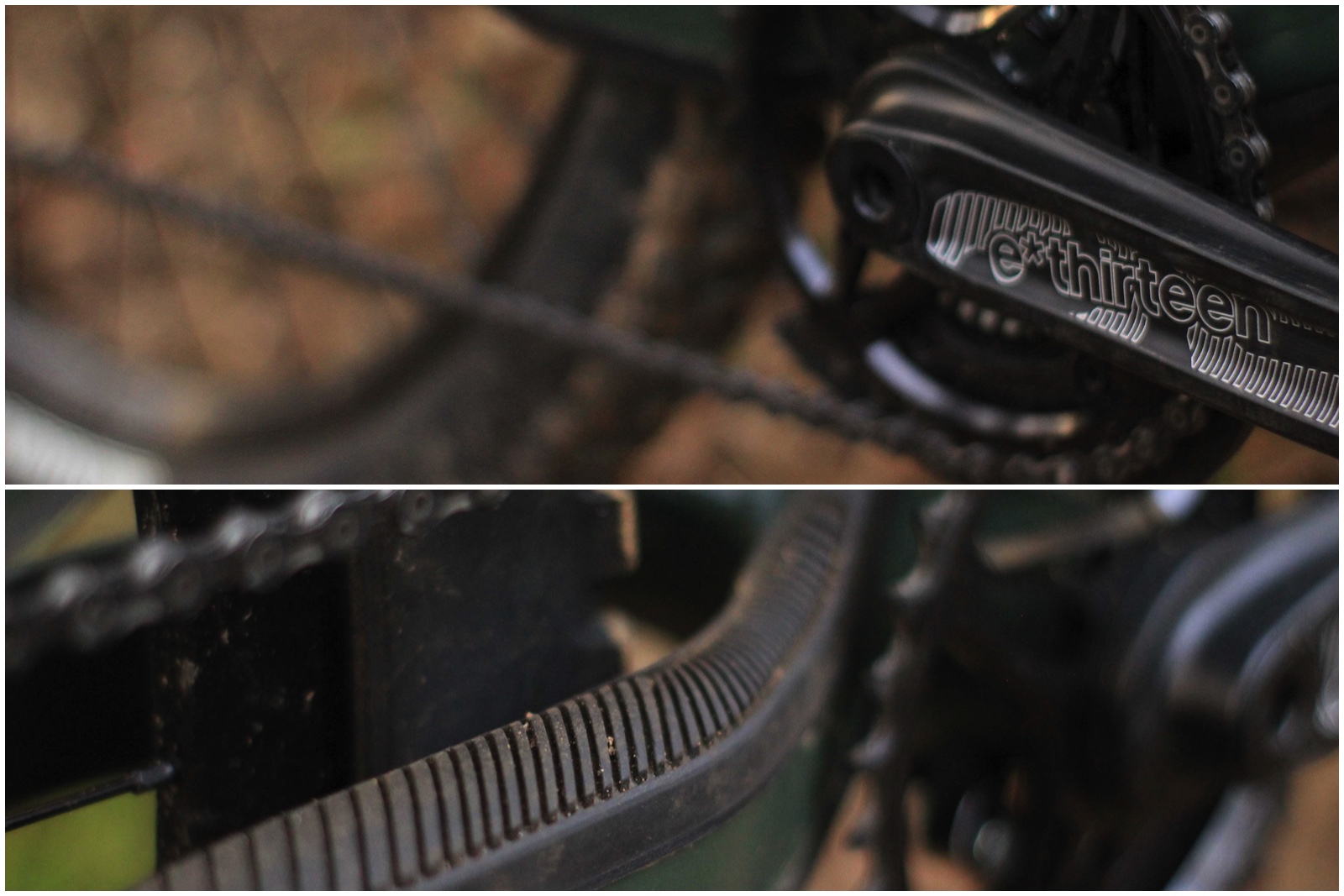 E*Thirteen supplies the cranks for the Furious Essential, which do the trick, with a no frills approach. They aren’t the lightest, but they do feature a direct mount 36 t ring, which shaves off some grams and looks good. The TRS+ guide is simple, and has been effective, as we’ve yet to drop a chain while using it. The other small, but important accessory to the Furious, is the included chainstay protection system. The molded rubber is thick and covers the whole chainstay region, further keeping things silenced and the frame protected. 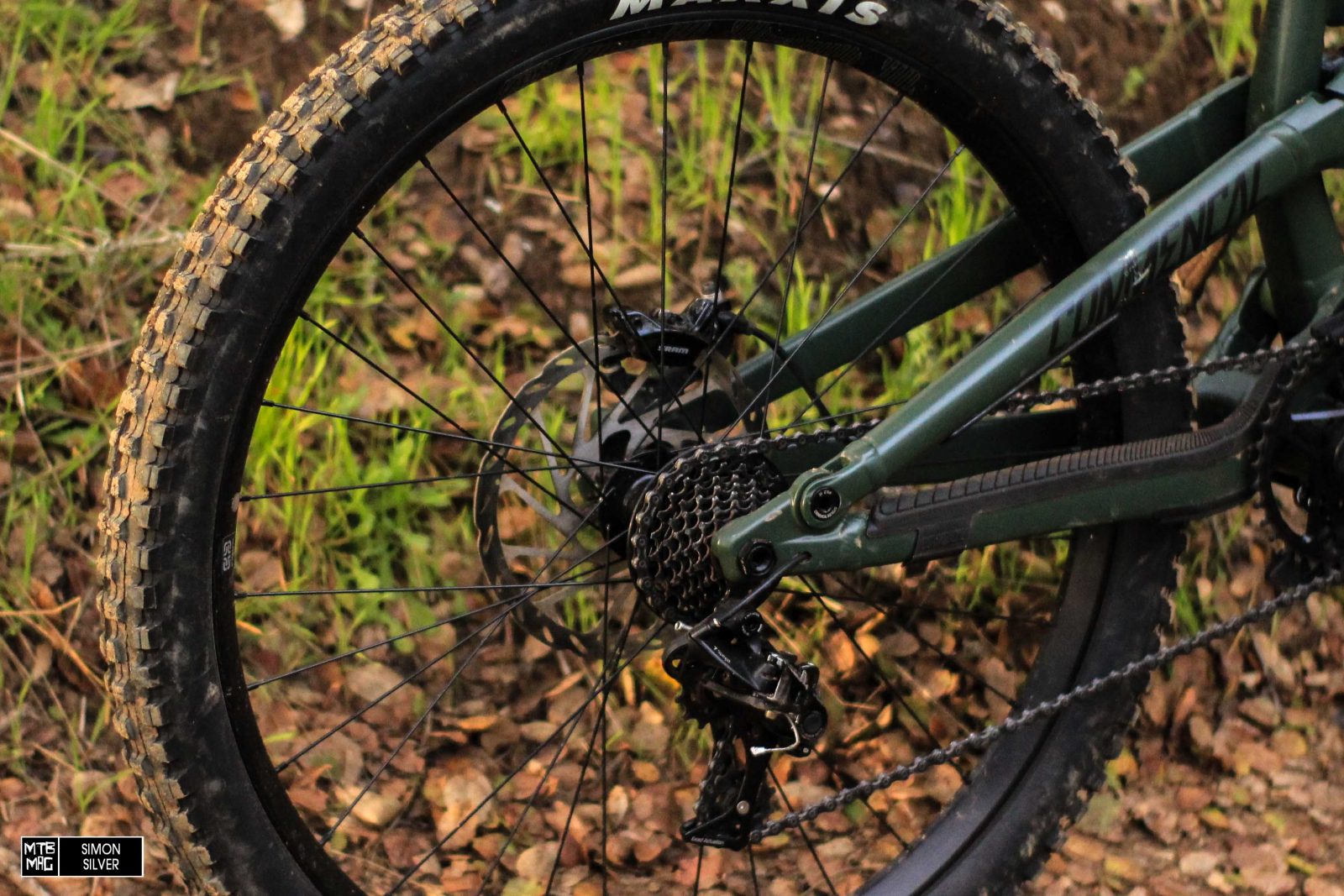 The SRAM GX DH 7-Speed drivetrain has been very solid, and the KMC black treatment chain is a small, but nice visual addition to the bike. E13 LG1, 32 hole rims with a 30 mm inner diameter, are tubeless ready, though interestingly only the front 2.5 Maxxis DHF tire is tubeless ready, and the 2.4 DHR II in the rear is not. The rims are laced to cheaper Formula sealed bearing hubs, nothing to report here, they get the job done, though engagement and weight aren’t strong points. 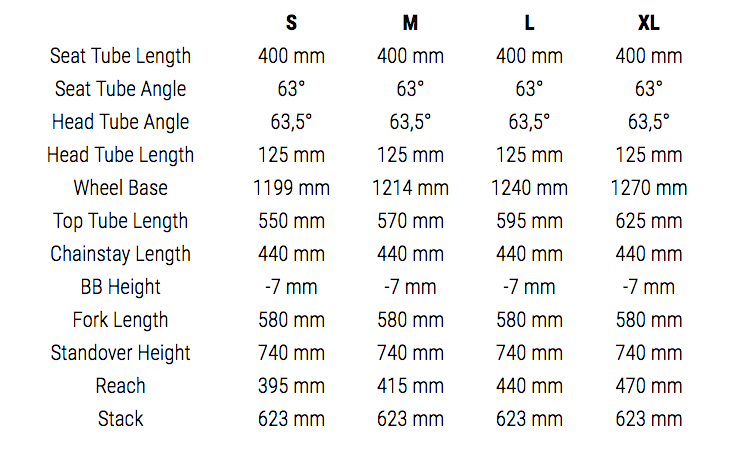 The Commencal Furious has a 440mm chainstay length, which in comparison with other modern DH bikes, isn’t the shortest. Our size medium featured a 415mm reach, which didn’t feel super roomy. The reach provides a compact and nimble feeling rig, and the bars never feel far away. The 63.5° head tube angle gives the bike a stable feeling on the steeps, but isn’t so raked out in that it takes away from cornering and hitting jumps. The 63.0° seat tube angle puts the rider over the back end, and allows for plenty of sit down wheelies and manuals, regardless of the longer chainstays.

The Furious is a bike that we felt right at home on in a surprisingly short period of time. It’s well balanced, and handles air time well. The agile nature of the bike allows for it to be whipped around as you please. The effort required to get sideways, and and pop off of lips is less so then a  race oriented toward DH bike. The top tube length may not be long enough for those looking to hang off the back down race runs, but it was perfect for us, and allowed easy no-handers. Brutal, technical downhill isn’t necessarily what the Furious was designed to excel at, but it can hold its own on rowdy trails. The Furious Essential tier build kit doesn’t make for the lightest bike, coming in at around 37 lbs, but given the price, we feel Commencal has done an excellent job with spec. The Super Deluxe shock at times felt a bit harsh on some terrain, lacking the bomb proof and supple feel of a coil shock, but it gets the weight down and felt super poppy on the jumps. It’s possible with compression adjustments we’d walk a finer line, but as it is, the rougher tracks were sometimes a bit much for a rebound adjustment only. The high bb allowed for plenty of room to clear obstacles, but wasn’t as low as some DH bikes that boast a low bb height for sake of stability. At high speeds the Furious definitely gives a sensation that the rider needs to be aware of oncoming rocks, roots, etc, and prepare for them, rather than some DH bikes that resemble a tank capable of plowing over rough obstacles in it’s path. The tradeoff is that it’s more of a nimble, lively bike park slayer. The Commencal Furious Essential is a bike that likes to play, it fiends for side hits, and bonks. Its slight downfalls in the world of rough DH tracks, are far outshined by its nimble and flickable nature. The components on the bike have seen some abuse, yet everything is still working smoothly. It’s a very impressive spec for the price. The paint scheme on the bike is one of our favorite parts, though the powder coat quality seems to chip and scratch easily, with lots of small imperfections that appear each session.

We’d recommend this bike to any rider looking to heavily lap their local bike park, aspiring freeriders looking to trick and jump their big bike, and anyone on a budget who likes subtle colors, and clean lines.