After the dust cleared at Sea Otter this year, the folks at GT were kind enough to send me home with a Fury Carbon Pro 29. The “Pro” level is the middle spec of three tiers, with a budget bike below it and a team replica bike above it. The model is available in both 27.5″ wheels as well as 29″, which we’re discussing here. The Fury is also available as a frameset, and in fact, GT makes a “Switch Kit” so you can convert between wheel sizes via an extended lower headset cup and a new seatstay.  The Fury is the first big wheeled DH bike that I’ve ever ridden, so it’s been fun doing some laps and getting a feel for it. This article mainly pertains to my initial thoughts, so for a more in depth, long term review with more nuance and increased focus on durability, check back in a few months… 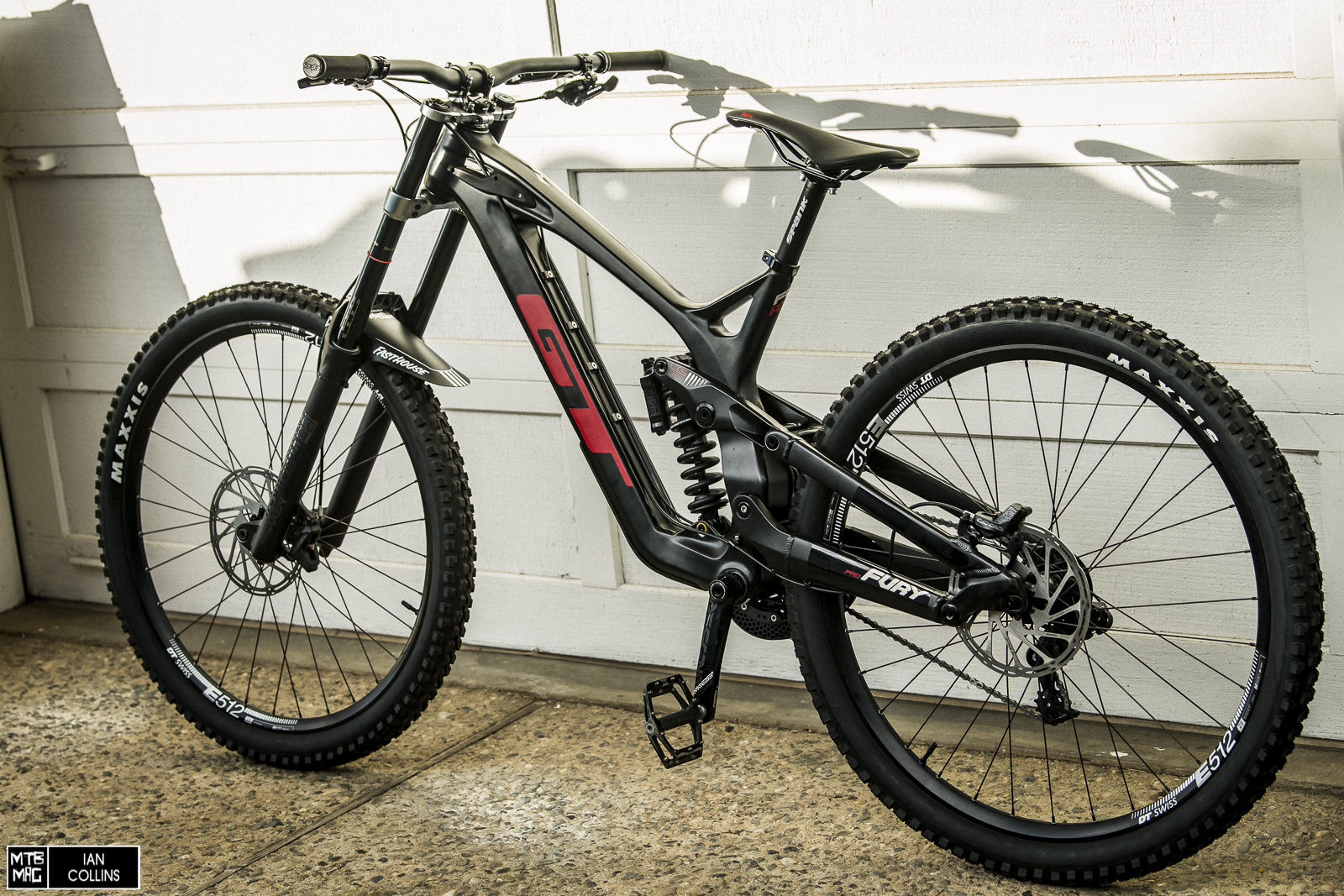 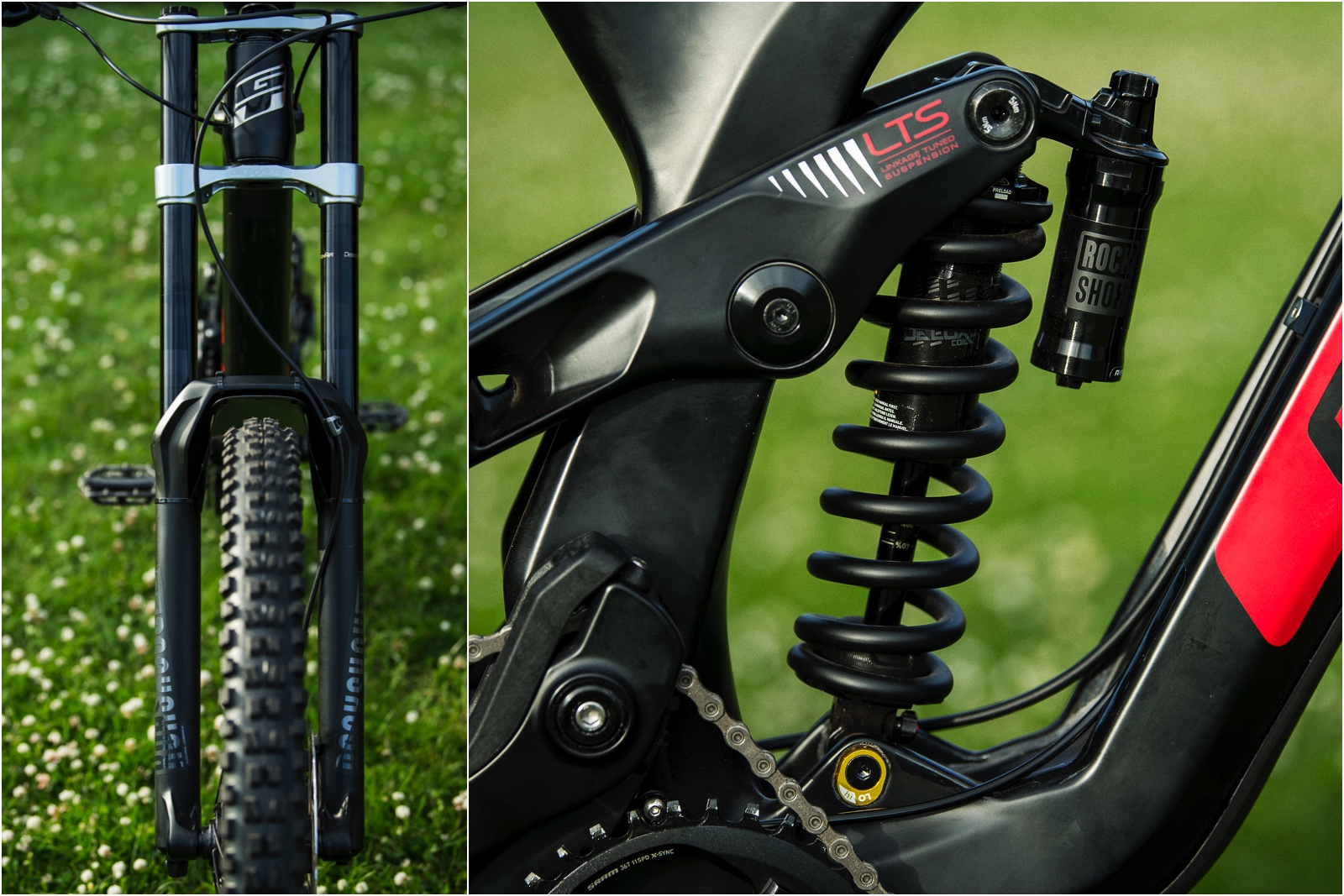 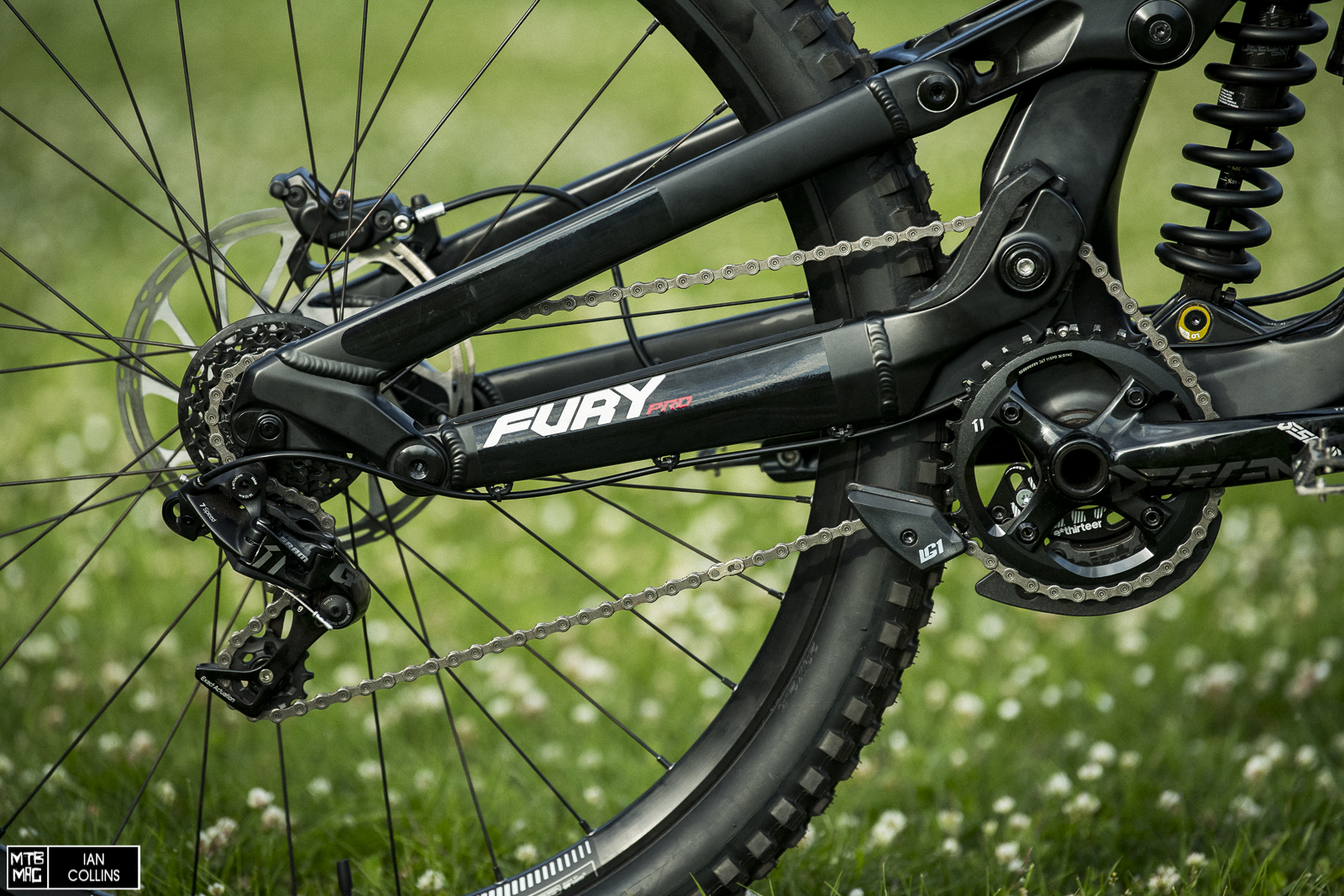 The drivetrain is comprised of SRAM’s budget 7-speed gravity group: GX DH. Although it’s not exactly featherweight, this group works just as well as the top tier XO1DH group and shares the main benefit: the gearing goes up exactly 2 teeth per cog, meaning you won’t spend as much time clicking through the gears trying to find the right ratio. It really is perfect for downhill riding and racing in that regard. Up front, Descendant cranks are a proven mid range option – they’re strong, stiff, and actually reasonably light. One gripe is that GT spec’d a 36T ring, which is quite gnarly for a 29″ wheeled bike. A 32T would be more appropriate. Lastly – e*thirteen lended their engineering efforts toward a custom LG1 chainguide. 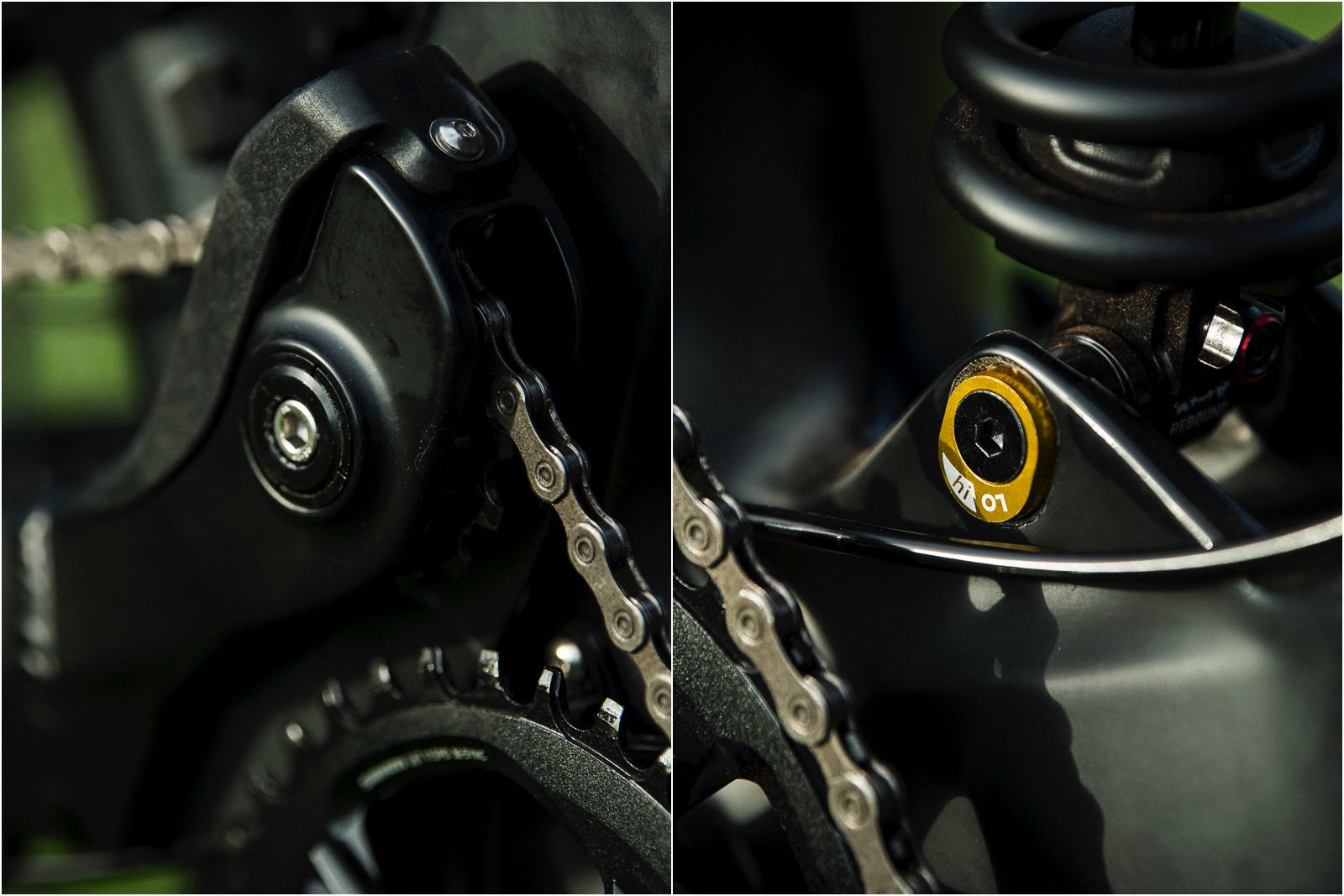 Above, on the left you’ll see the idler pulley, something else e*thirteen helped with, on the plastics. While the pivot placement isn’t considered super high, it is high enough to help the bike carry speed better than bikes with a lower main pivot. The idler helps to limit pedal feedback and isolate drivetrain forces. On the right, you can see the flip chip in the lower shock eyelet. With two allen keys and two minutes time you can alter the bike’s geometry between high/steep and low/slack. 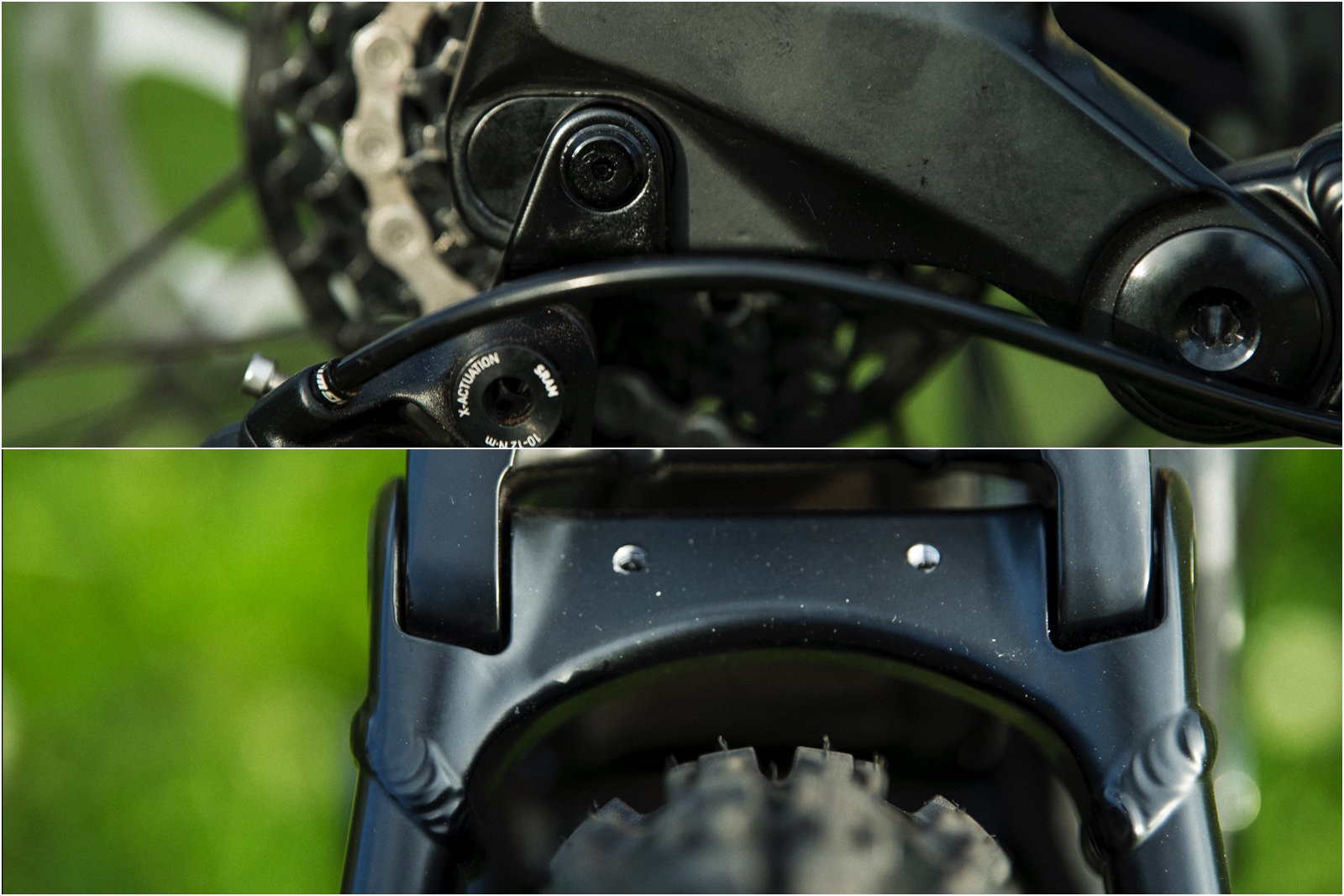 Speaking of flip chips, at the top of the photo above, you can see an insert where the derailleur hanger mounts – this gives you +/- 10mm of chainstay length adjustment. So far, I’ve just been running it in the shorter ~437mm setting. Despite having a 2.5″ tire and being set to the shorter position, you can see that the bike still has quite a bit of tire clearance.  The two holes indicate that perhaps a fender is/was in the works. At the very least, it’d be easy to zip tie one on… 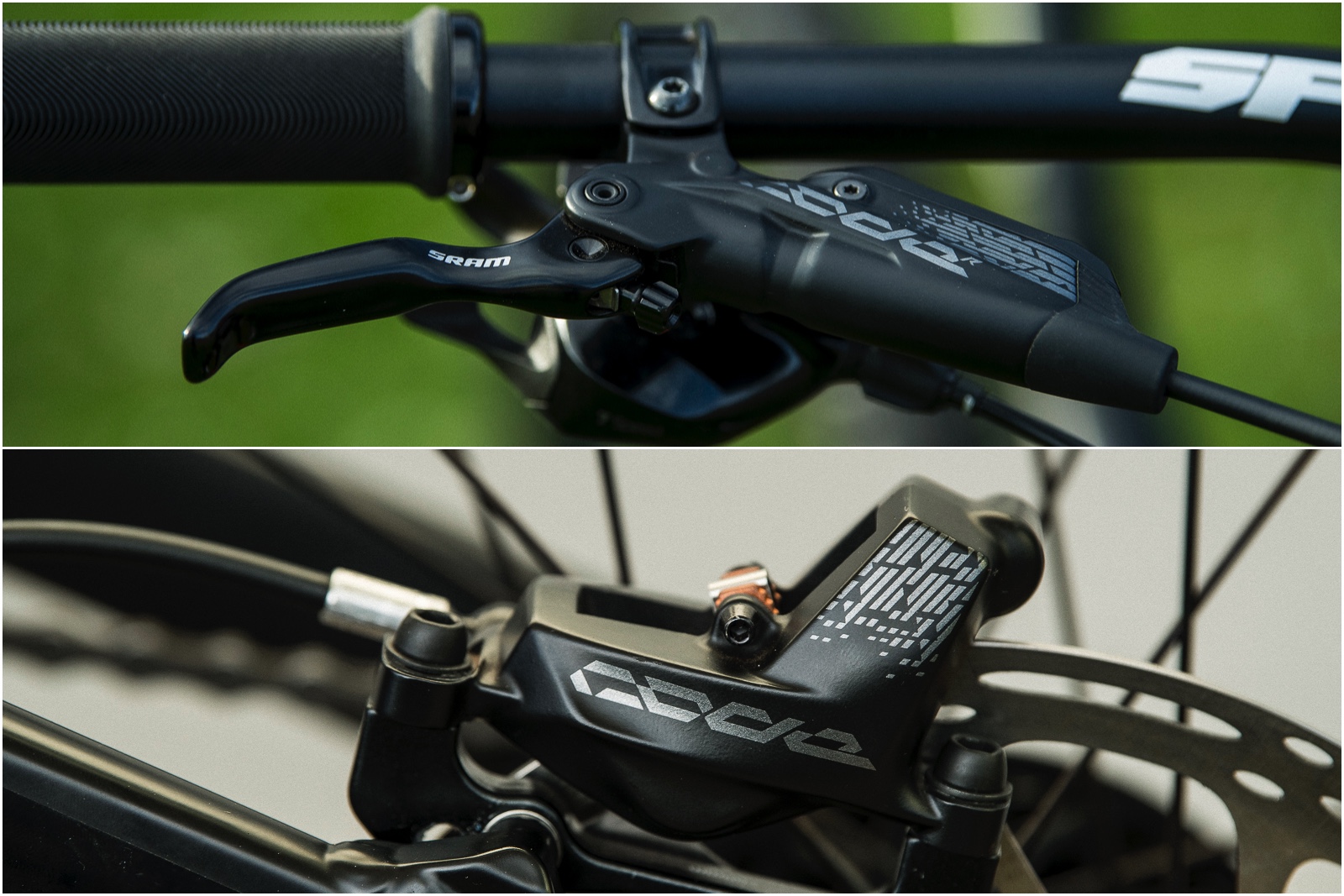 SRAM Code R brakes are tasked with keeping speed under control, and although they lack the contact point adjustment, they feel the same as their more expensive RSC counterpart, and you can still adjust lever reach without tools. They’re paired to 200mm Centerline rotors front and rear. 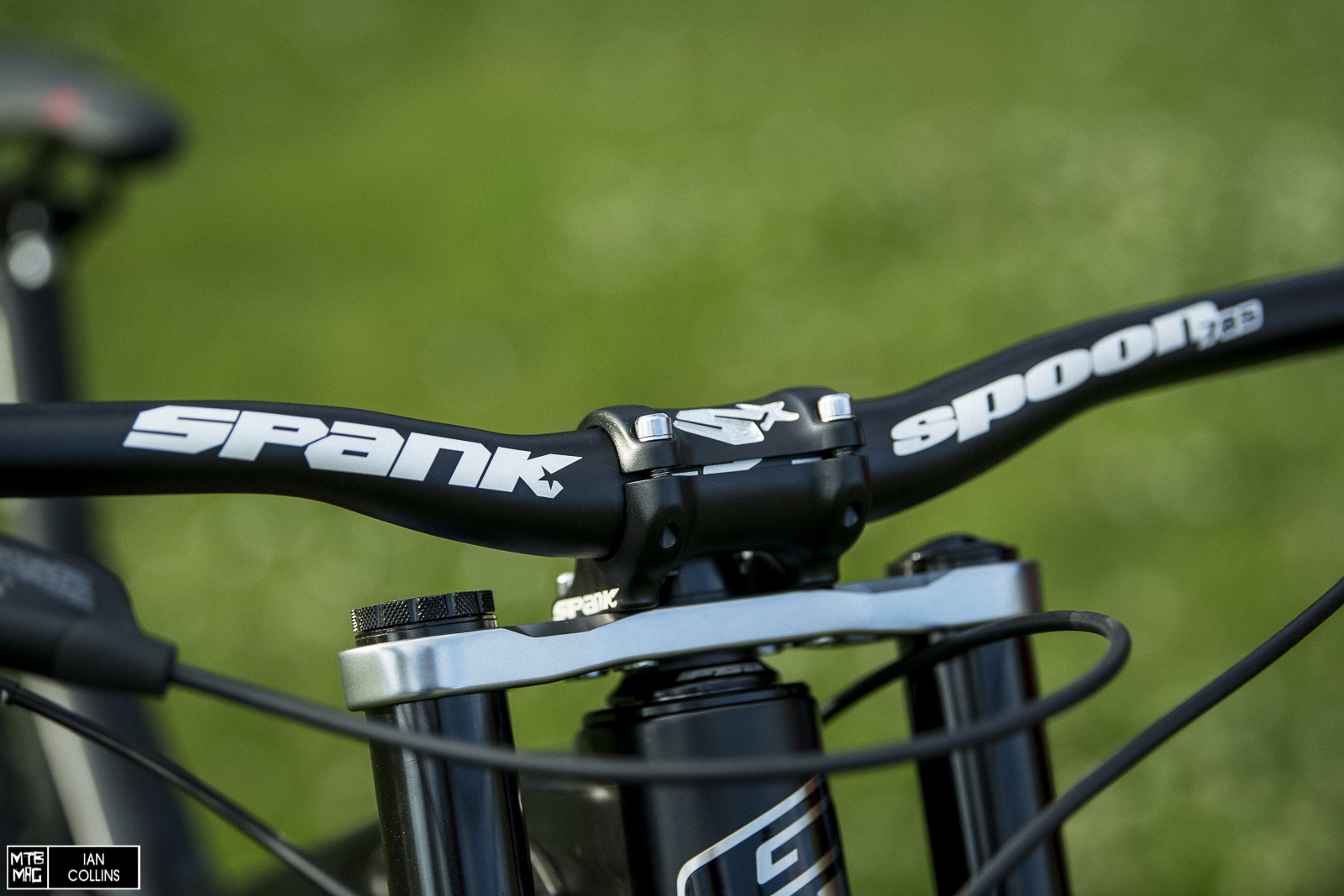 GT spec’d a Spank Spoon 785mm X 20mm rise handlebar and their direct mount stem, which is adjustable between 25mm and 30mm length. While they are both solid products, I’d much prefer to see a 40-50mm length stem and a full width, handlebar with more rise to better work with the rather low front end. While I’ll mostly be riding this bike stock, I did swap these bits out as a matter of achieving proper fit. Spank also covers the seatpost, while GT chose Fabric’s excellent Scoop saddle for seating arrangements. 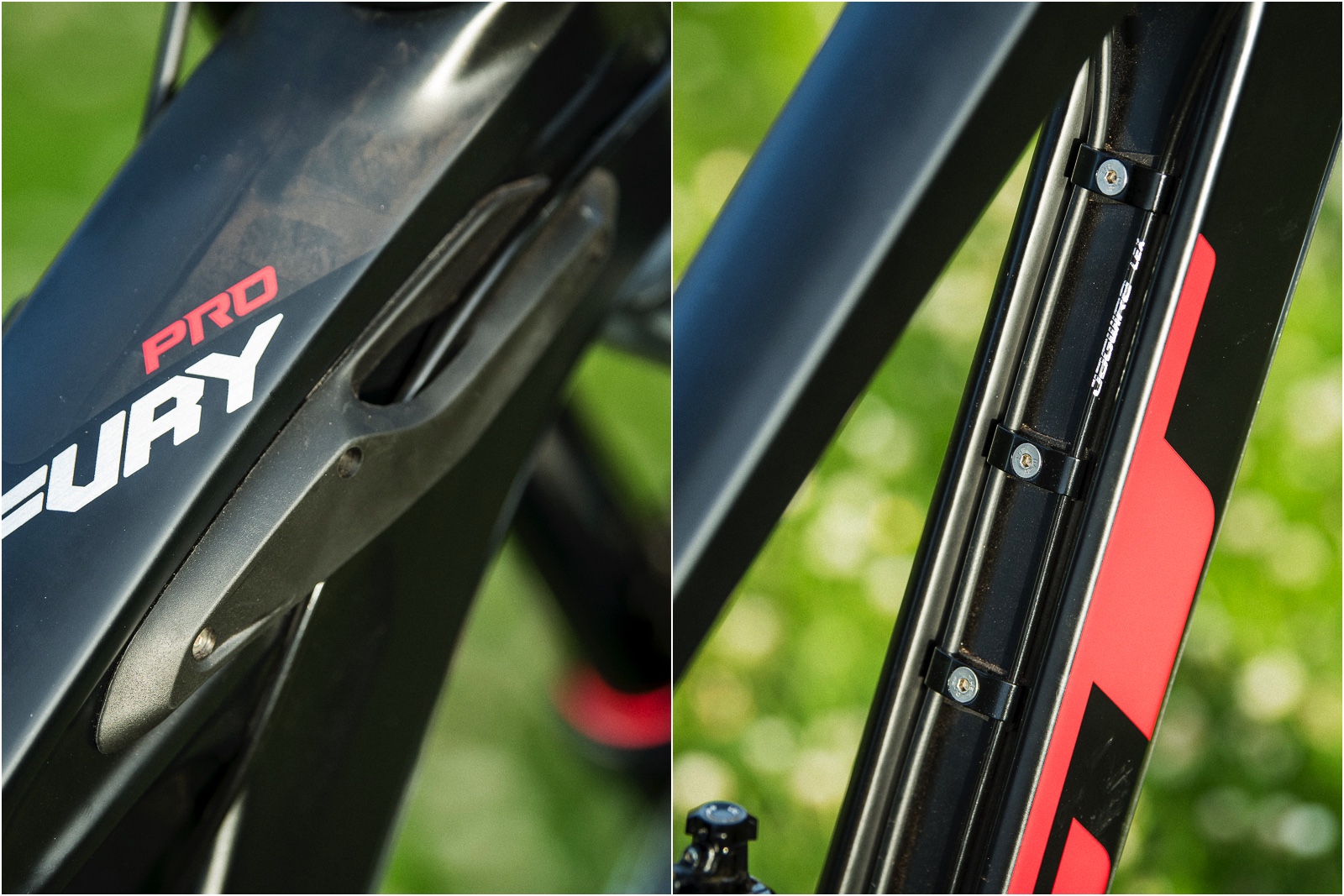 More frame details include a really dialed fork bumper that not only guides, but protects the cables/hoses and frame. It does however add even more width to the already wide front end, thus further limiting turning radius. On the right, GT uses external cable/hose routing that is bolted to the frame in a hidden channel running down the top of the downtube. This keeps it from snagging while loading on and off of chairlifts and maintains a nice, stealthy aesthetic while still making maintenance easier. 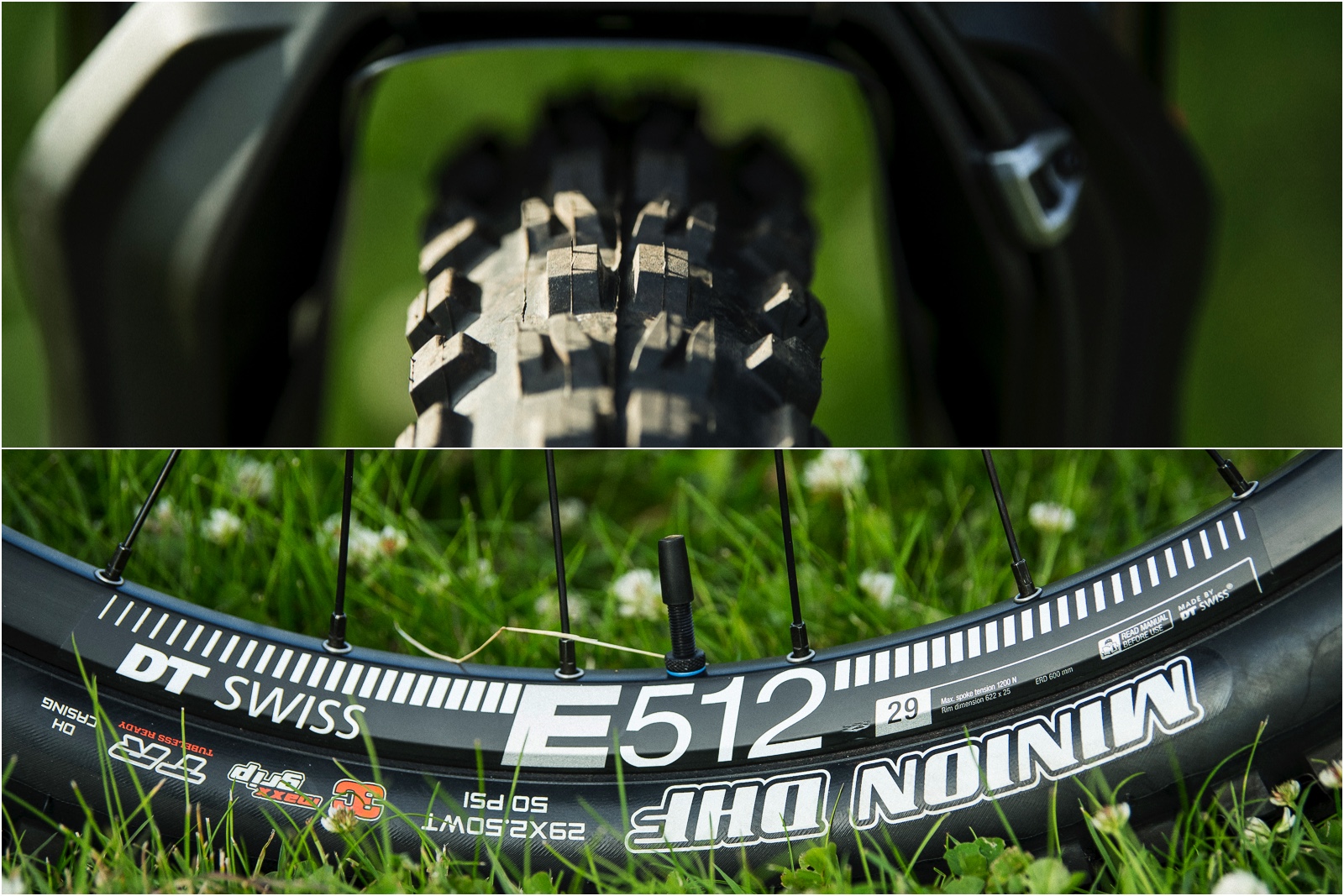 GT spec’d the universally loved Maxxis Minion tires in a 2.5″ Wide Trail version front and rear with the 3C compound and a wire bead DH casing. The bike shipped with tubes, but I switched over to tubeless straight away to help get the rolling weight down amongst other things like improving resistance to flatting. Lastly, DT Swiss E512 rims are laced to in-house hubs with stout 2.3/2.0 spokes to improve stiffness and strength. Although I’m sure they have their reasons, it’s odd that GT chose Boost 148 rear spacing, as it will make it difficult to get ahold of spare, complete DH rated wheels, but the bike is so burly that it doesn’t affect stiffness. 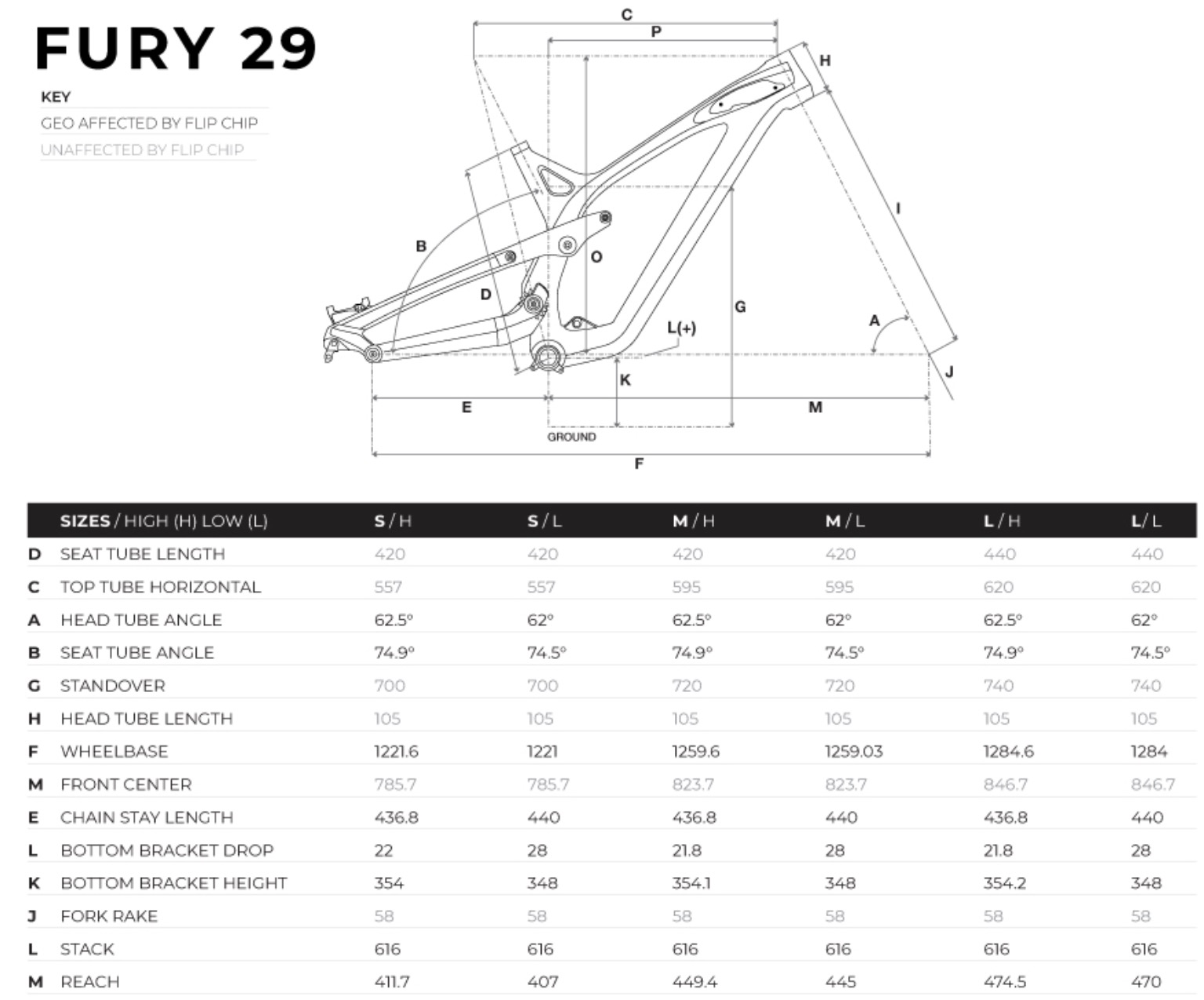 Aside from the aforementioned taller bar and a longer stem, I’ve mainly been riding the Fury Pro in stock form. This machine came with a 500 pound spring out back, although that may or may not be the stock rating on a Large. In any case, after some rough extrapolation, I snagged a lightweight steel 425 pound Nukeproof spring, which put me just under 30% sag at 185 pounds. Note: Chain Reaction is a great resource if you need hard to find 25 pound increment springs, at a reasonable price/weight. Anyhow – aside from how freakishly quiet it is, the first thing I noticed was how well the Fury carried speed. I can see why 29″ wheels came on so strong in the racing world, but that isn’t the sole factor in the Fury’s penchant for pinning it. In large part, credit is due to its rear suspension layout, and that credit is due to Luis Arraiz – the man behind the much improved kinematics at GT and Cannondale as of late. The fairly high main pivot allows for the axle path to move rearward as it travels up through its suspension, while an idler pulley that’s concentric to the main pivot helps to isolate drivetrain forces and limit chain growth. This pivot placement prevents the bike from getting hung up and slowed down as badly by impacts. Its suspension arrangement uses an interrupted chainstay (read: Horst link ) as part of a four bar linkage that drives the shock. The Fury has a very progressive leverage rate curve and the Super Deluxe worked very nicely with it – having a low speed compression adjuster is actually quite nice, and surprising to see at this price point (props to the product managers on that one). Without wallowing, the rear end was very supple off the top, offering gobs of traction. On the big hits it resisted bottoming extremely well without excessively ramping, or sacrificing mid stroke compliance.

In terms of handling, despite its super slack 62.5º head angle, the geometry lent itself to surprisingly quick directional changes and impressively fast response times…But there’s a catch – you need to be up to speed. Getting those wheels rolling again after an offbeat turn, or pushing through a slow, tight section wasn’t exactly a breeze, but it would be shortsighted to attribute that purely to wheel size. For the price, the spec on the Fury Pro is quite good out of the box. It’s a great choice for a working class privateer racer, but if there was one thing that could greatly improve the feel of this bike, it would be to lighten the wheels – however, that remains true of just about any bicycle out there. Anyhow – as far as parts go, it was somewhat unexpected that despite having less damping adjustments, the BoXXer RC felt just as good as a BoXXer World Cup. My sentiments are verbatim on the Code R brakes compared to Code RSCs, but I was wishing for a 220mm rotor up front. Big wheels require more braking power, so it’s no surprise that World Cup racers opt for oversized discs. Unsurprisingly, the Minion DHFs are a safe baseline tire choice and they are iconic for good reason. Despite their weight, the wheels are holding up well – time will tell how they fare in the long run though. Lastly, from a performance standpoint, so far the SRAM GX DH drivetrain has been truly excellent, with its weight being the only setback compared to its flagship counterpart. Given the Fury Pro’s placement and pricepoint, the drivetrain is a great choice, so no complaints there.

Aside from my minor gripe regarding a fairly short, low and narrow cockpit on an already low front end, I’ve been getting along nicely with my first 29″ DH bike, in nearly stock form. That’s something I never thought I’d find myself saying. Time will tell how everything holds up in the long run – we’ll keep you posted in the coming months. In summary, my first impressions are that the Fury Carbon Pro 29 will make for an excellent bike for someone on a reasonable budget, who’s looking for a reliable race rig. It’s freakishly fast, oddly quiet and has darn good, albeit slightly heavy spec. The geometry is finely tuned, as is its suspension (kinematics and shock/tune). Best of all, the between high/steep or low/slack setting, the long vs. short rear center and even the possibility of adjusting head angle and wheel sizes, it’s a highly tunable machine. Regardless of what is done with those options, it will reward a strong, aggressive rider – slouches need not apply…But hard chargers with an affinity for tinkering most certainly should inquire.

[Video] The All New Orbea Occam

Just yesterday, e*thirteen unveiled a new tire dubbed the AT, which is short for all terrain.…