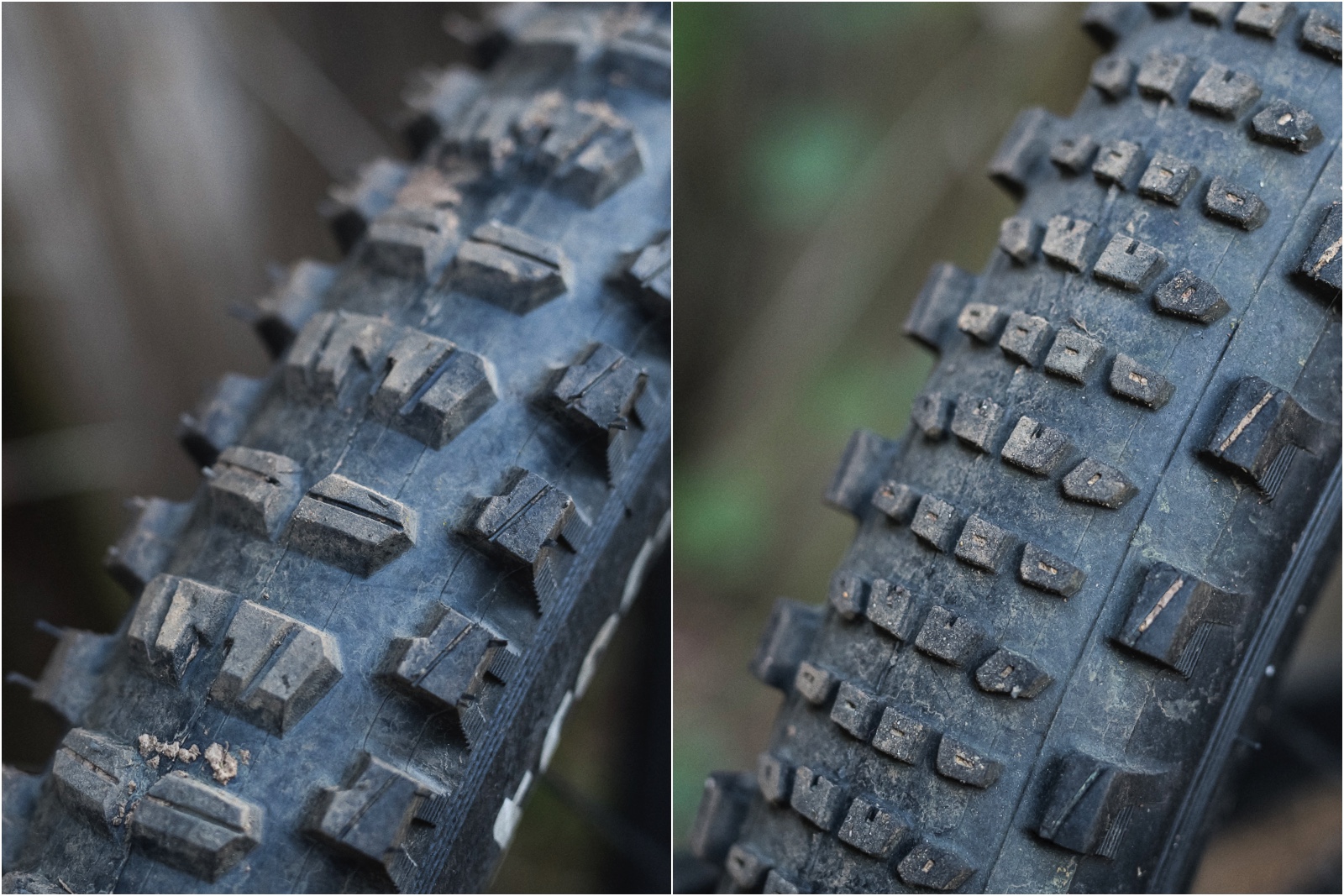 Just yesterday, e*thirteen unveiled a new tire dubbed the AT, which is short for all terrain. As the name indicates, it’s aimed at being a versatile all around trail tire that works well in an array of conditions. They were nice enough to send us home from Sea Otter with one of the new tires for testing. We’ve also been riding their SS (semi slick) tire, which was released in the fall, for a few months now. Here are our thoughts on the new rubber. 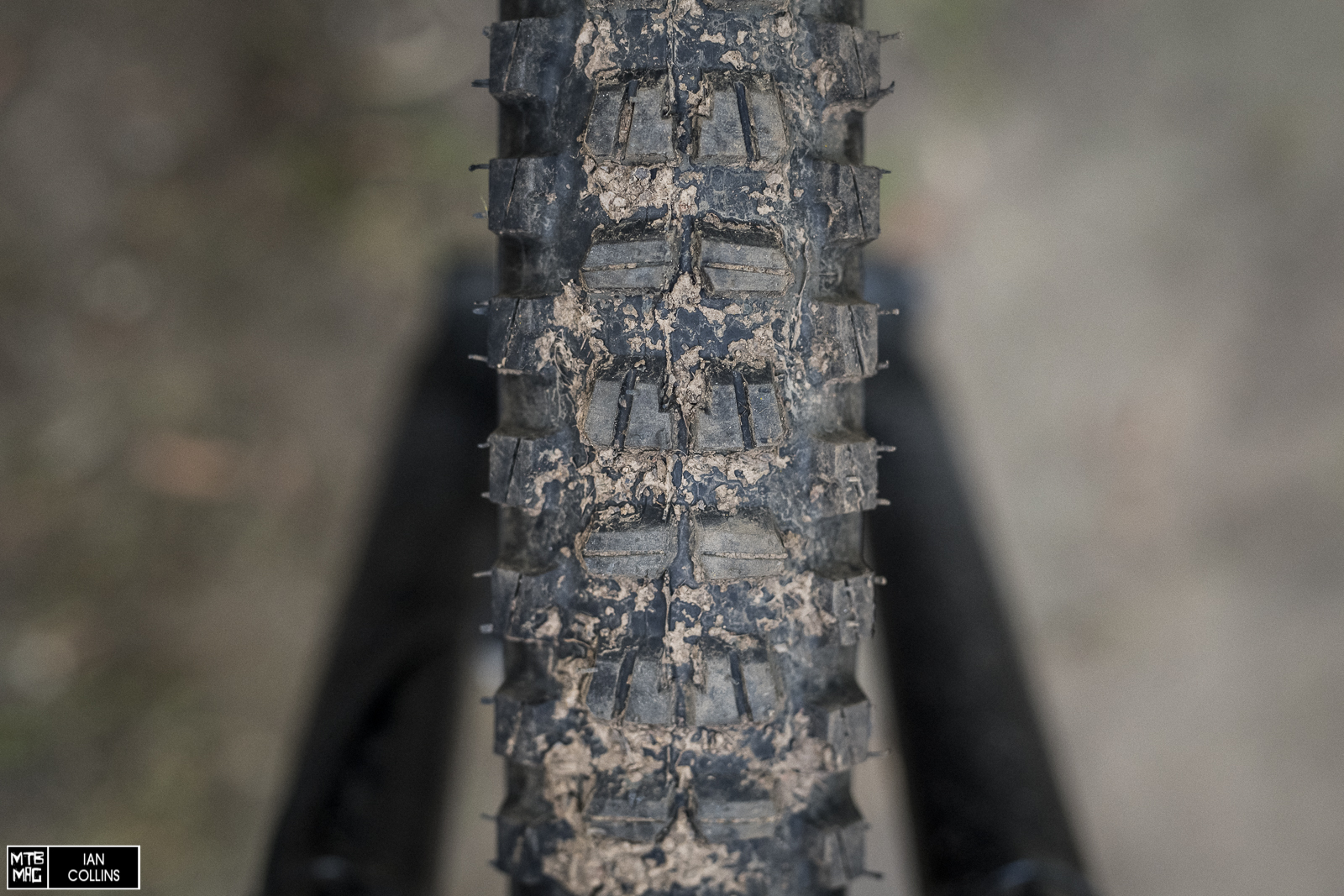 On first glance, the AT looks a bit like the offspring of a Specialized Butcher and a Maxxis Minion DHR2, and that’s alright as both of those tires are quite good. In terms of profile, compared to most of e*thirteen’s tires, the All Terrain is much more round and the side knobs are a substantially lower. 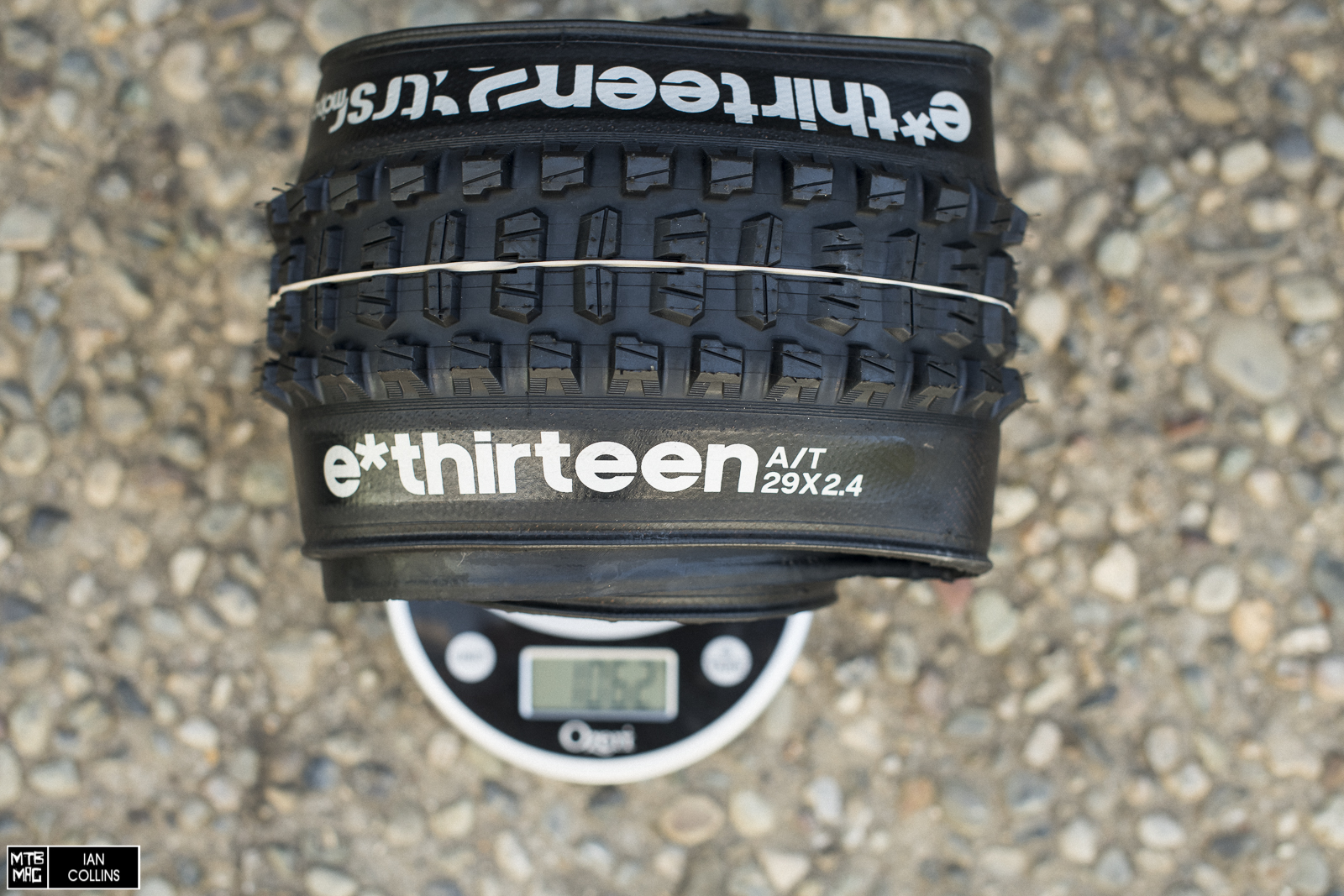 The claimed (1015g.)and actual weight are a little off, but for a big wheeled, 2.4″ wide single ply trail tire, the AT comes in at a respectable weight. 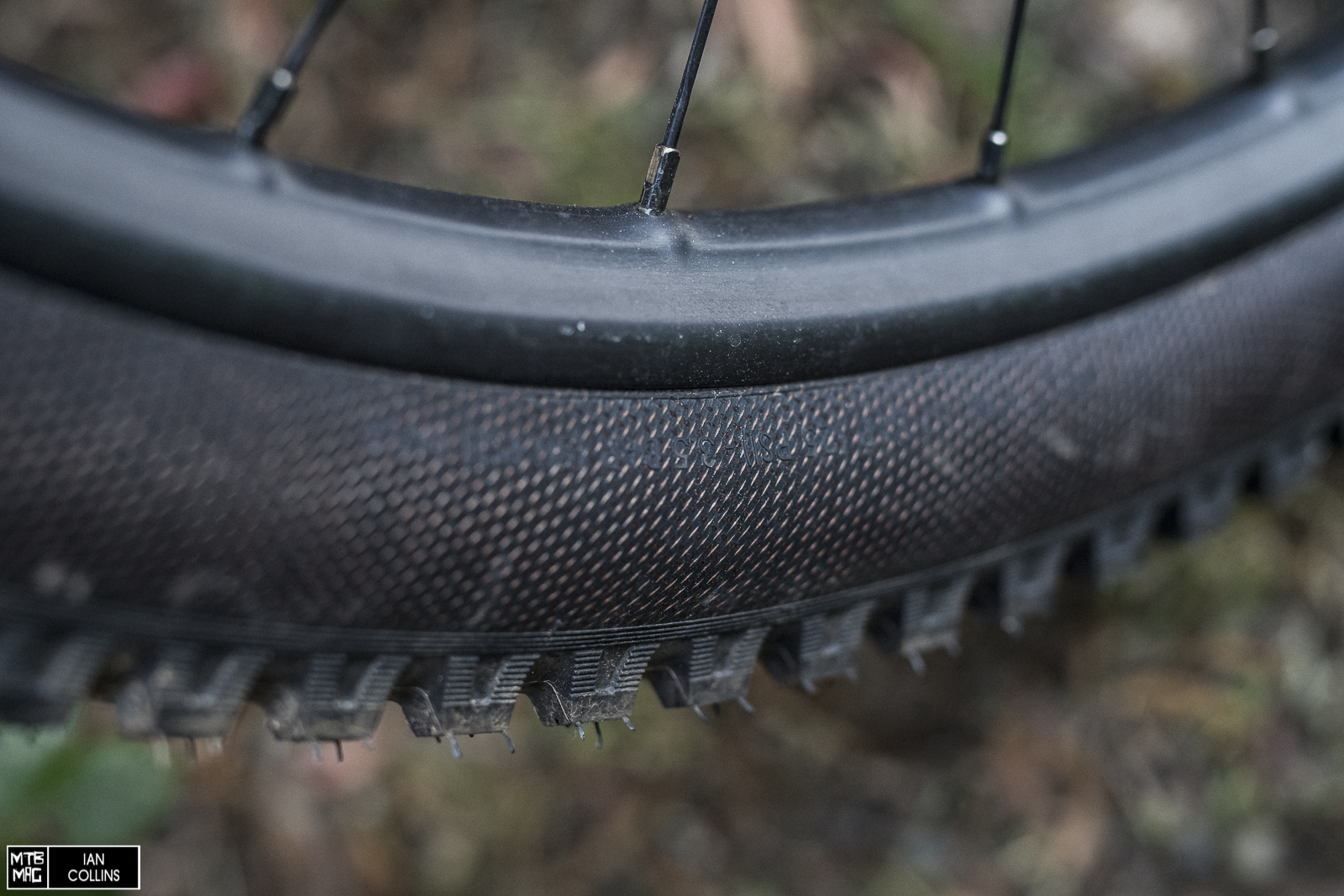 A very interesting new addition for e*thirteen is the Aramid protection on the sidewalls. They’ve used the material under the treat for some time, but now visible, it sports a distinct look. Synonymous with Kevlar, it’s a material that’s known for its resistance to cutting. 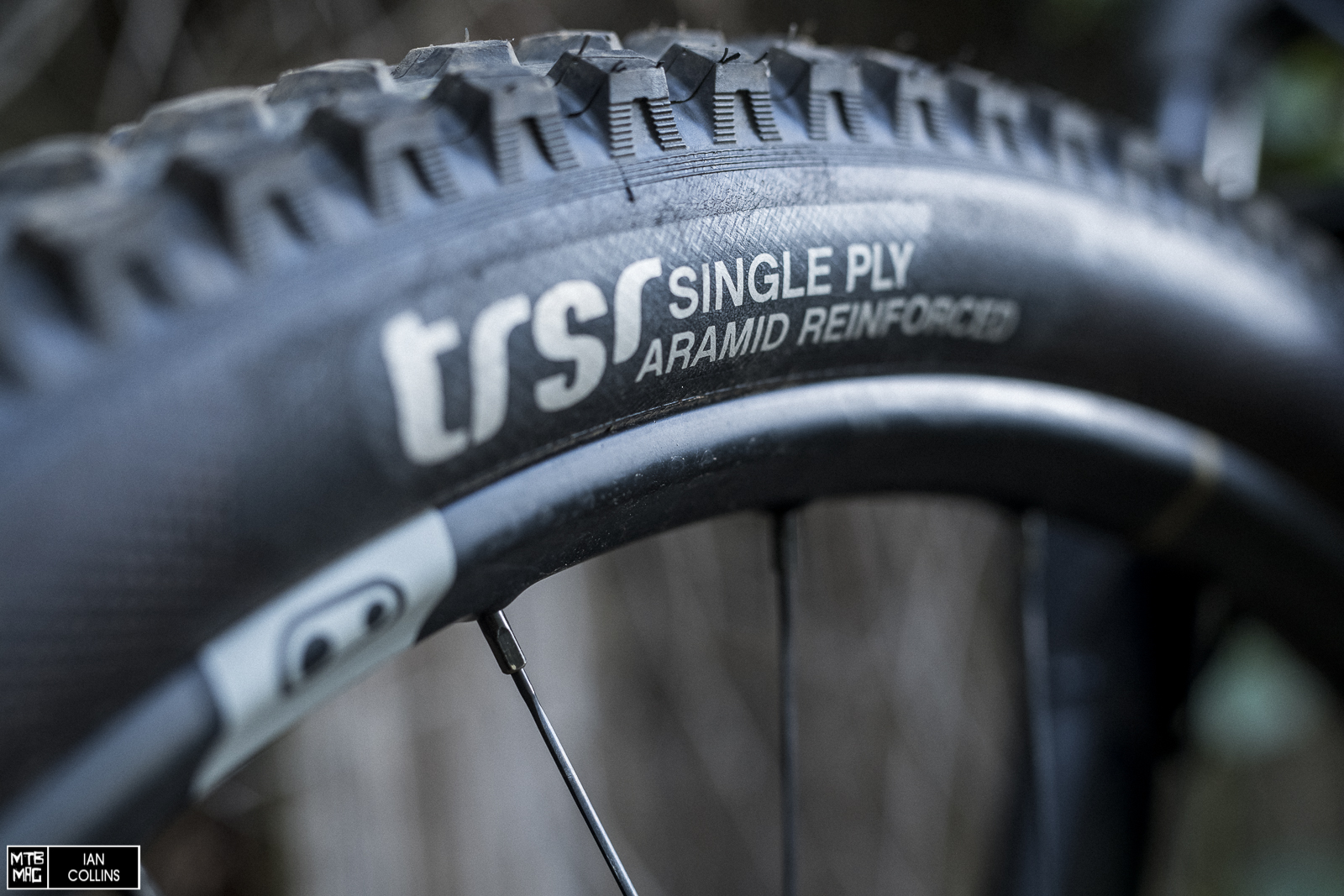 Despite the fact that they are already lower in height, the side knobs have horizontal siping and a vertical relief channel to encourage some flex. We’re testing the single ply casing version of this tire, but it’s also available as a dual ply in both a mid weight Enduro tire as well a DH tire. 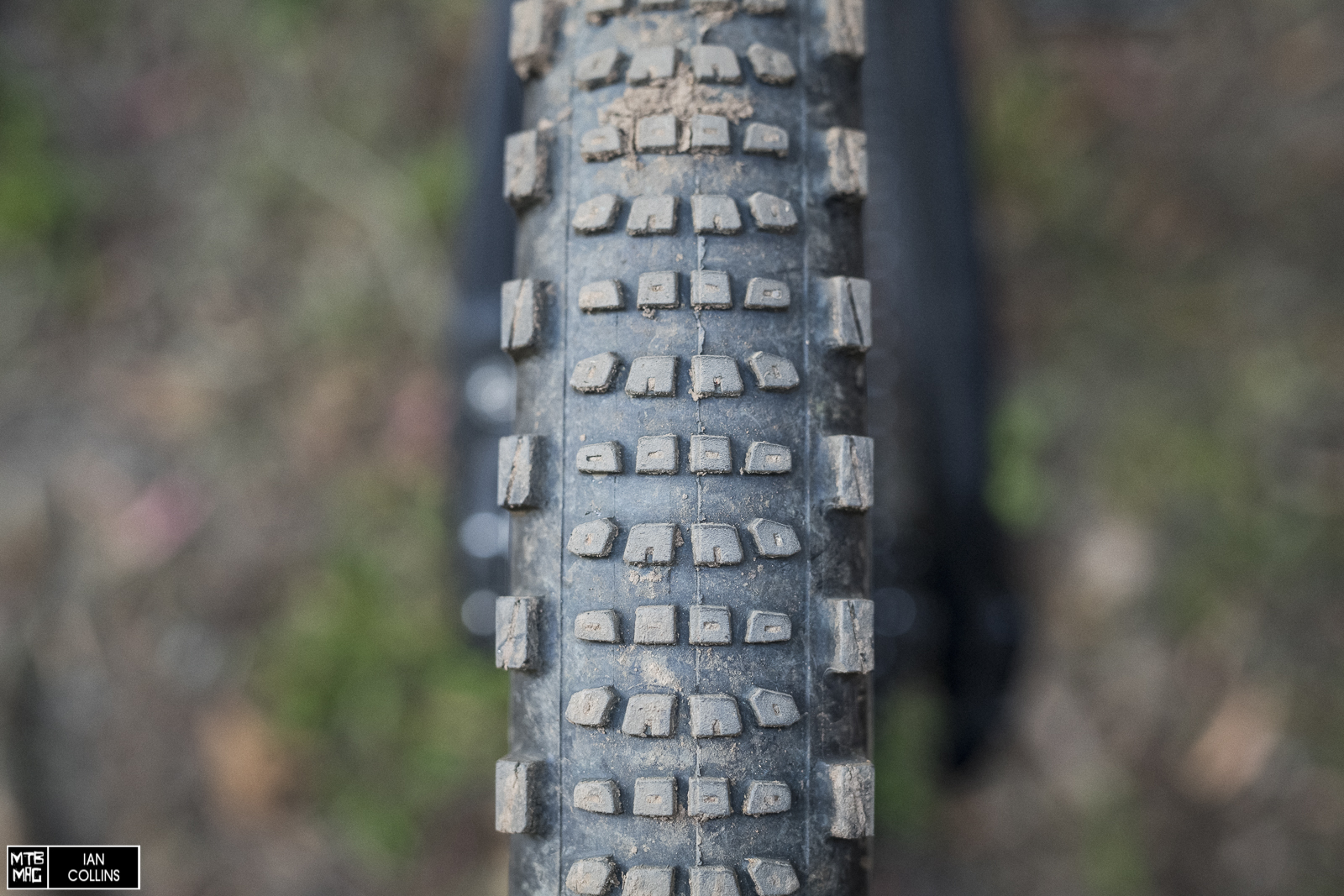 The tread pattern on the SS doesn’t look to be a far cry from your average semi slick, although the corner knobs might not look quite as burly as some other offerings. 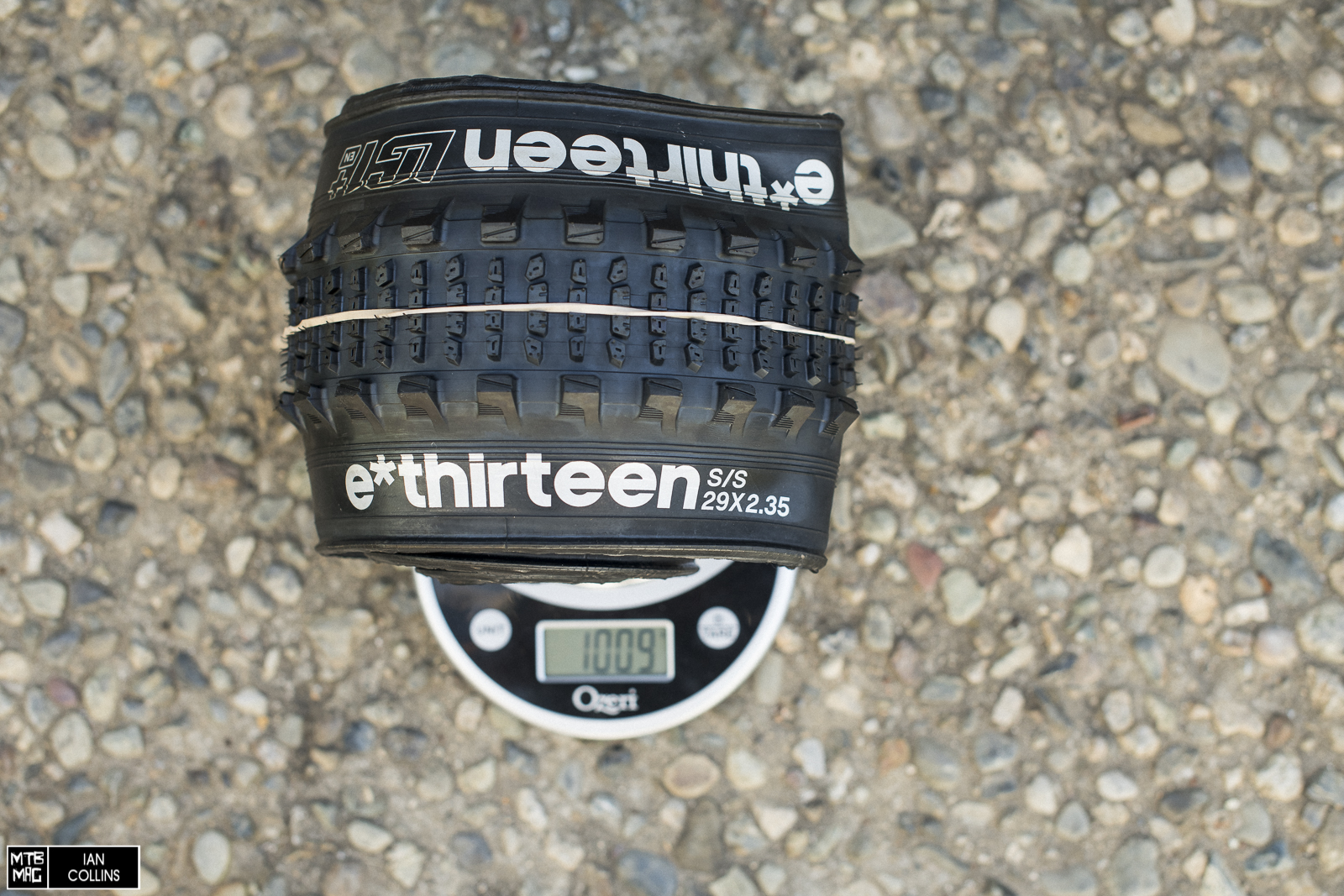 The weight of the SS came in just under claimed weight, within a couple of grams. 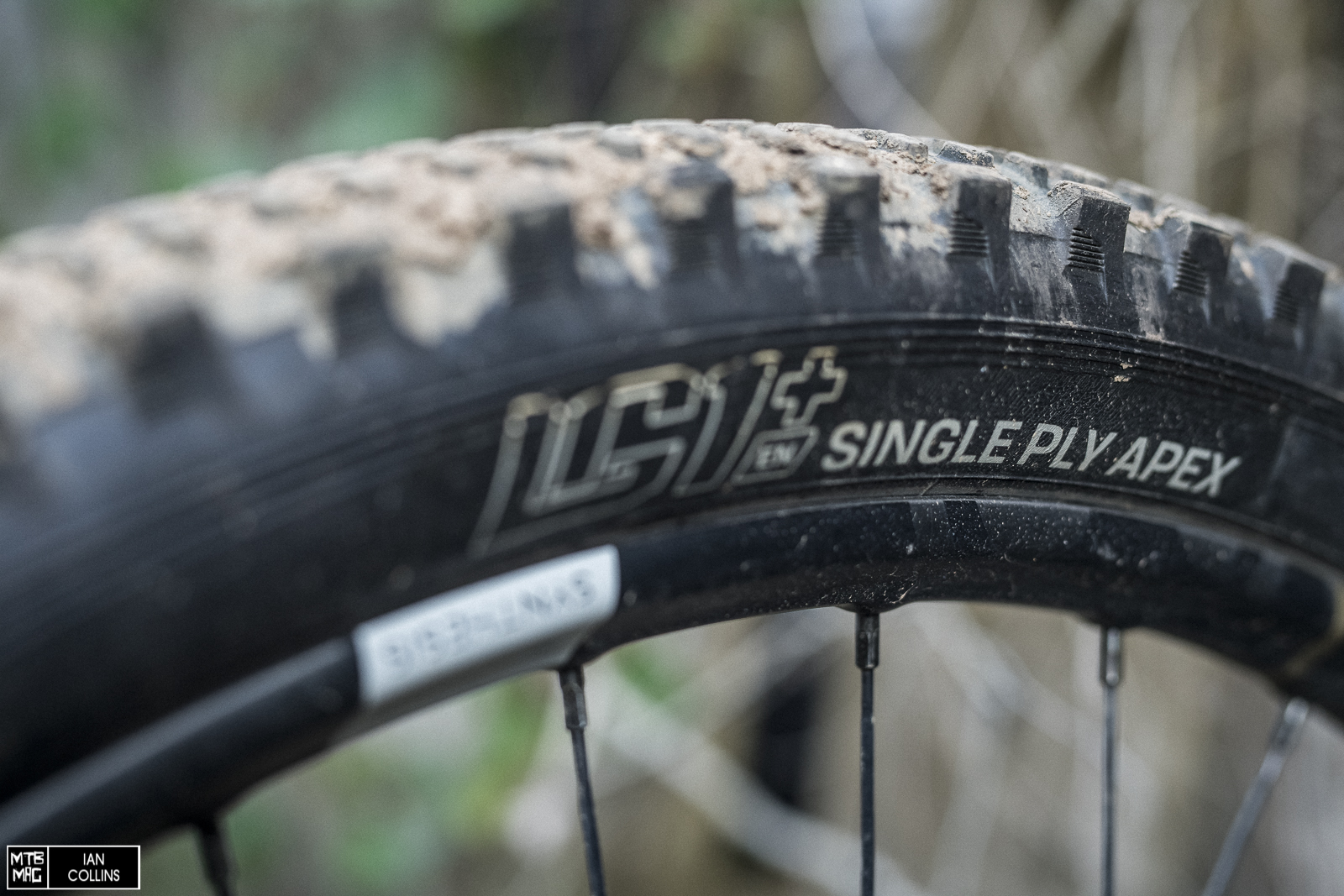 The SS has a folding bead in all configurations, but the single ply version is what you see here on test. If you look closely in the top right of the photo above, you can see that the side knobs are siped in the corner opposite where the knob bites into the ground, which encourages some flex.

Starting up front, it was exciting to test out e*thirteen’s new “Mopo” compound on the AT tire. According to their description of the new rubber, it is an “ultra high-tack, slow rebound tread, with a harder base for better tread wear and faster rolling”. Upon first feel, the rubber doesn’t seem all that soft and squishy, but that’s due to the firmer compound supporting it from below. That support lends a hand in keeping things faster rolling and seemed to help durability. It also meant that under heavy weight in the corners, the knobs didn’t give way and fold. Credit is also due to the slow rebound nature of the compound, which helps prevent the tire from feeling erratic. 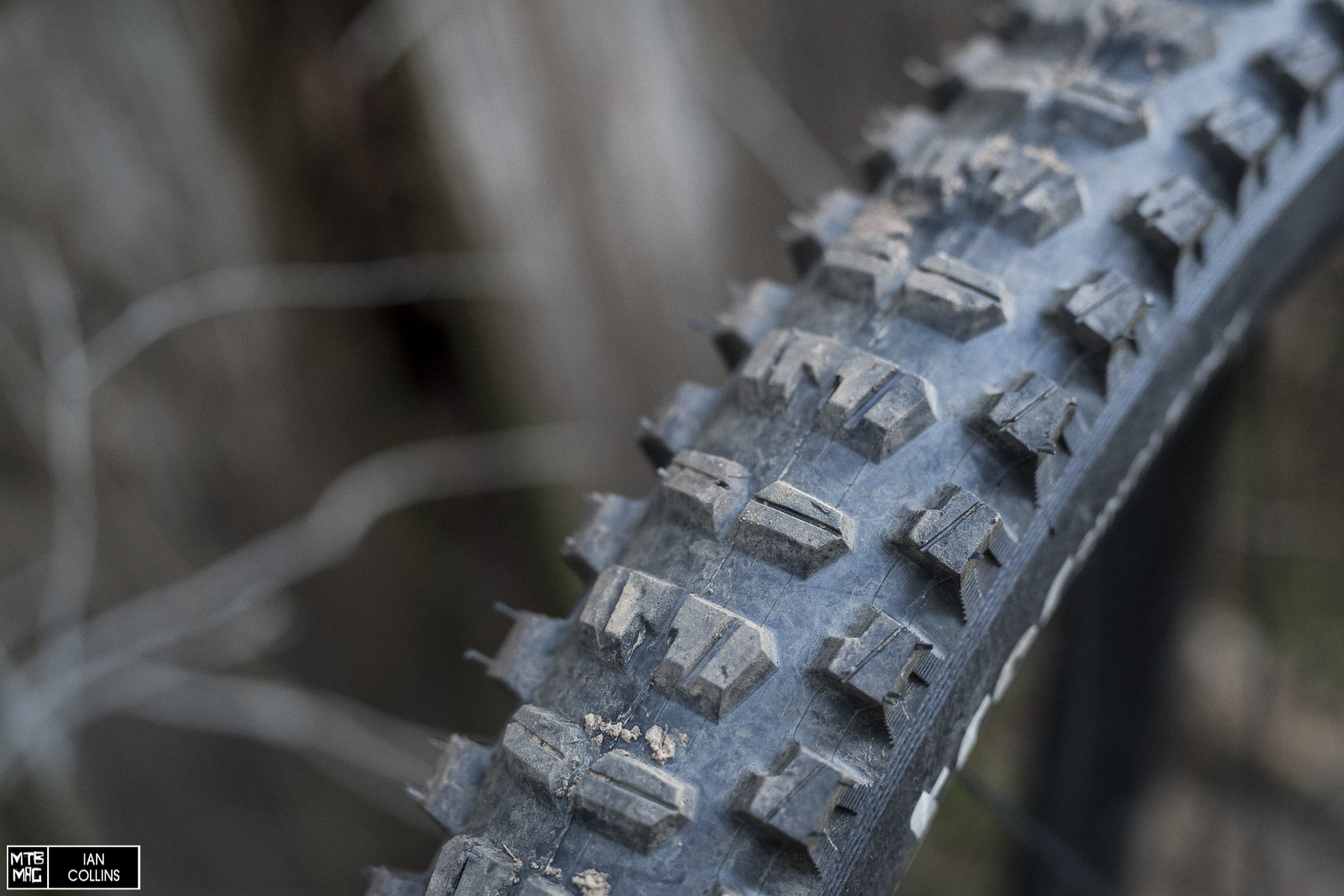 As mentioned earlier, the tread pattern was reminiscent of a mix of a Butcher and a Minion DHR2. It’s worth noting that the AT rolled faster than both of those tires and while it didn’t quite have as much of a savage cornering bite as a (new) Butcher, had less knob degradation and deformation due to its slower rebound rubber. In short, it seemed to be a bit more well rounded (no pun intended). As far as the casing is concerned, no flats occurred during my testing, but a part of that time frame was spent with Cushcore’s new XC inserts installed. Either way, while it’s hard to make any bold claims about the effectiveness of the Aramid reinforcement, it seemed to do a good job and put the puncture resistance:weight ratio at a good place for a middle of the road trail tire.

The Semi Slick tire arrived before an exceptionally wet winter here in Santa Cruz, so most of its testing occurred more recently, now that the trails have dried out a bit more. To be completely frank, in my opinion, I haven’t found a whole lot of range in ride quality/characteristics between the current crop of semi slicks available for mountain biking. Schwalbe’s Rock Razor, Maxxis’ Minion SS and the Specialized Slaughter have all felt quite similar with only minor subtleties in how they feel when transitioning onto the sideknobs as well as when leaning hard into them. 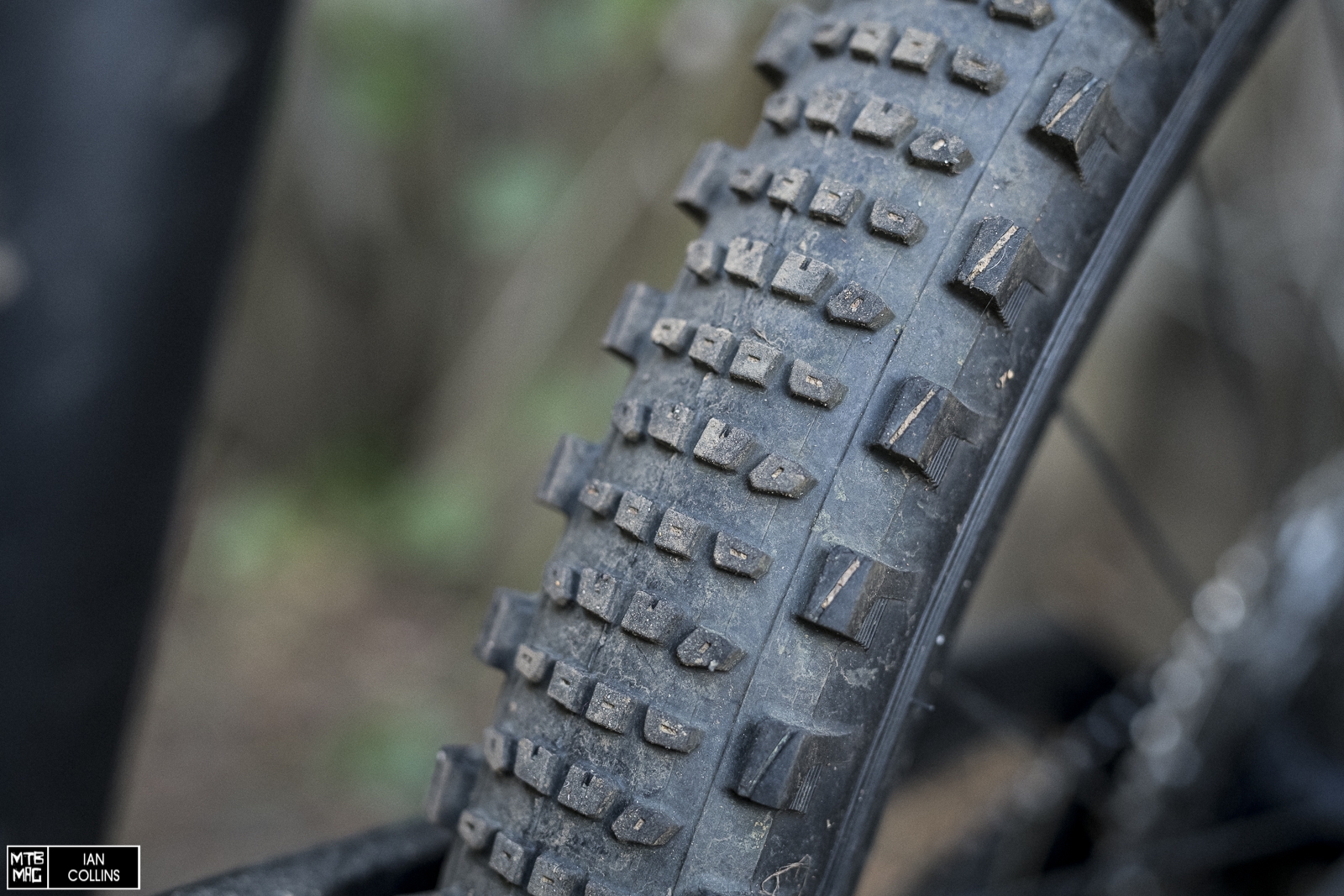 On first glance, I assumed that the e*thirteen SS was going to offer less cornering support due to the slightly smaller, more broadly spaced side knobs. But, they worked out better than I expected, and alas coming full circle, I stand by my prior statement that there still really isn’t that much range in the feel on the current crop of semi slick tires. That’s not to say that this is a bad tire, but rather just that I’d be lying if I said it was vastly different from other semi slicks out there. All in all, semi slicks make sense for certain riders, on certain terrain and in the right conditions. The one thing I did notice was that its braking and climbing traction did seem ever so slightly better than other options I’ve tried over the years.

In summary, the new AT is an excellent tire and I think that e*thirteen is definitely on to something with the new Mopo compound as I tend to prefer a well supported slow rebound rubber. Cornering and braking were all very impressive, but best of all it rolled very quickly and efficiently – far better than any other e*thirteen tire models out there, and better than the two tires that it bears resemblance to. Basically it’s just a damn good all arounder that should suit most riders in most conditions. I also applaud the new, rounder profile. As for the semi slick, I didn’t find it wildly different than many other options out there…There’s a time and a place for it, and it’s certainly worth a look if you’re in the market for an extra fast rolling rear tire.