Whistler, B.C., August 13, 2022 – The 10th anniversary of Red Bull Joyride lived up to its reputation as the pinnacle of Slopestyle today. With the largest crowd to date (38,000+ deep), it was elbows out, no wiggle room from the bottom of the Boneyard all the way up to the top where the superheroes of Slopestyle gathered to lay it down. 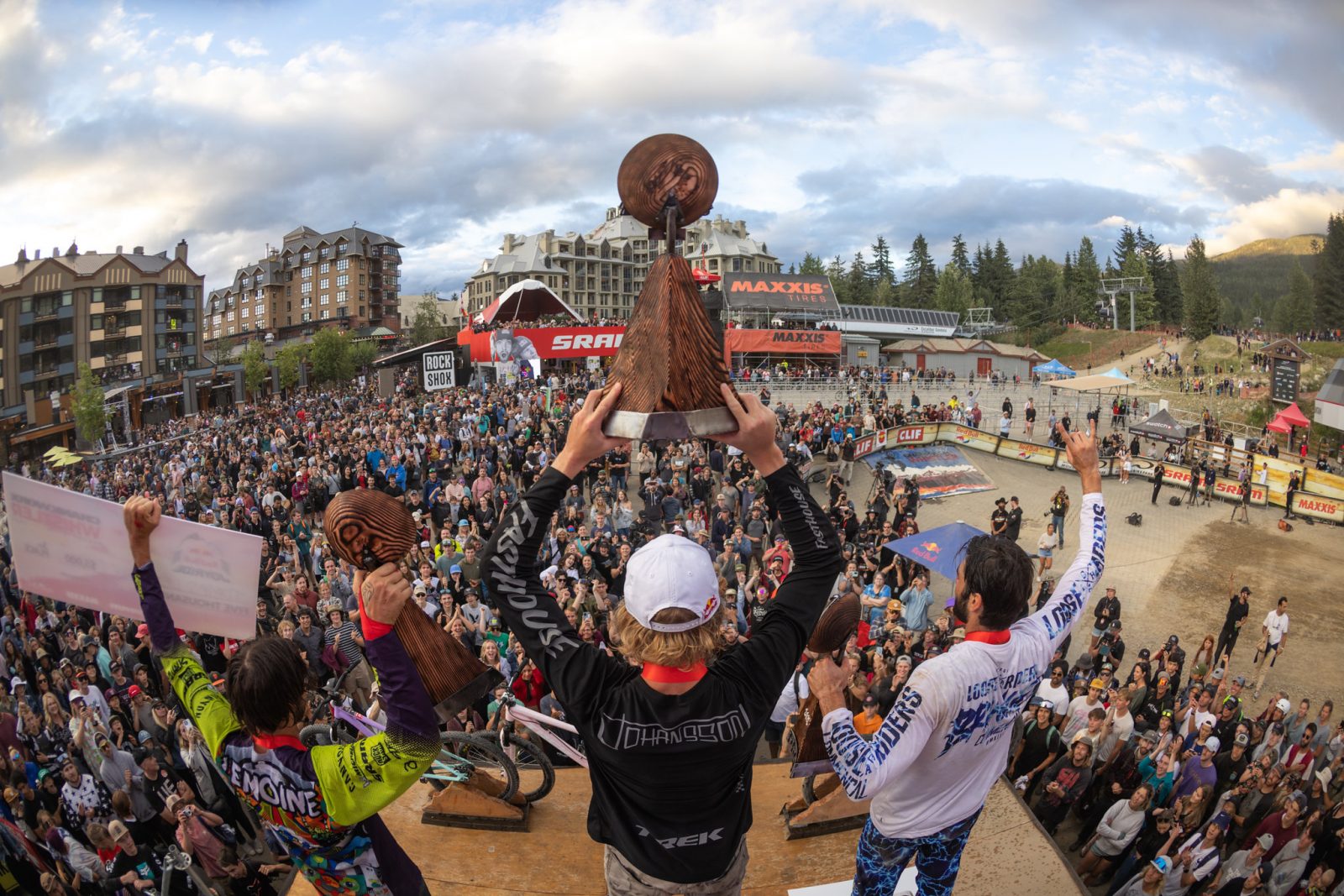 Emil Johansson effortlessly continued his Crankworx FMBA Slopestyle World Championship winning streak, taking his eighth win in a row. To be fair, it only appears effortless. In his words, he puts so much work and time into practicing, taking combinations and adding them into other combinations to create things that have never been seen in the sport.

“Surreal,” said the Red Bull rider of the gold-medal draped around his neck. “I didn’t think this day would come where the winning streak would last for over three years’ time, and to be back in Whistler again and secure the top spot feels surreal. Honestly, I don’t know where to begin.”

The fan-voted, satellite dish feature on the course brought out a more playful side to this style boss’ typical competition riding.

“I thought the satellite dish was really fun,” said the Swede. “It’s one of those style of features that we had all spoken about in the past. It lets the rider throw a trick in there which they wouldn’t really do in a contest run. If it would have been straight-on heavy hitters all the way down with big jumps, then there’s no way I would have done a nac nac on a big jump, yet with this specific feature, I feel like it was the right trick for it. We saw riders take advantage of it. For example Max got creative and got three tricks in it which is sick. It’s cool to see Huppi [Lucas Huppert] doing his thing spinning around twice. There are so many different ways to approach it.” While not a newcomer to Crankworx Slopestyle podiums, a newcomer to Red Bull Joyride at Crankworx Whistler, Timothé Bringer absolutely stomped his first run earning him second place.

“First Joyride for me,” the French rider said of earning second place. “I’m so happy to be here in Whistler with everyone and get a spot on the podium. This course was really original and had some features that we have never rode before in other competitions, so it was nice to see everyone doing different tricks on these features. It was hard to get the right speed in front of some of the jumps, so we needed to do a lot of practice before. In the end everybody was riding well, and we all did a good job I think.”

Arguably the crowd-favorite rider on course today was bronze-medalist, and now also ranked first for King of Crankworx, Tomas Lemoine. Tomas set the bar high during practice today when he gapped the entire final feature, overshooting and taking a big slam. The blood on his knuckles was still fresh from the crash when he dropped into his competition run and gave the final feature the send of the century turning two features into one. This impressed the crowd and the judges.

“I can’t believe it actually,” Lemoine said with his infectious cheerfulness. “I can’t believe today. Probably this trip was the best trip of my life. I came with my two childhood best friends, I’ve known them since I was five-years-old – Tim and Max. Being on the podium with my best friend Tim, Red Bull Joyride, it’s like my dream come true. I had another dream here which was to jump the last feature.  First day I came here and I just thought about doing this for the last week. I forgot so many tricks during practice just thinking about doing that last feature. I also had so many other events to do and today I had to send everything in one day. I can’t believe everything worked out. I can’t believe I had the energy to try to go for jumping the last feature in the second run and it worked out. It’s probably the best day ever.” 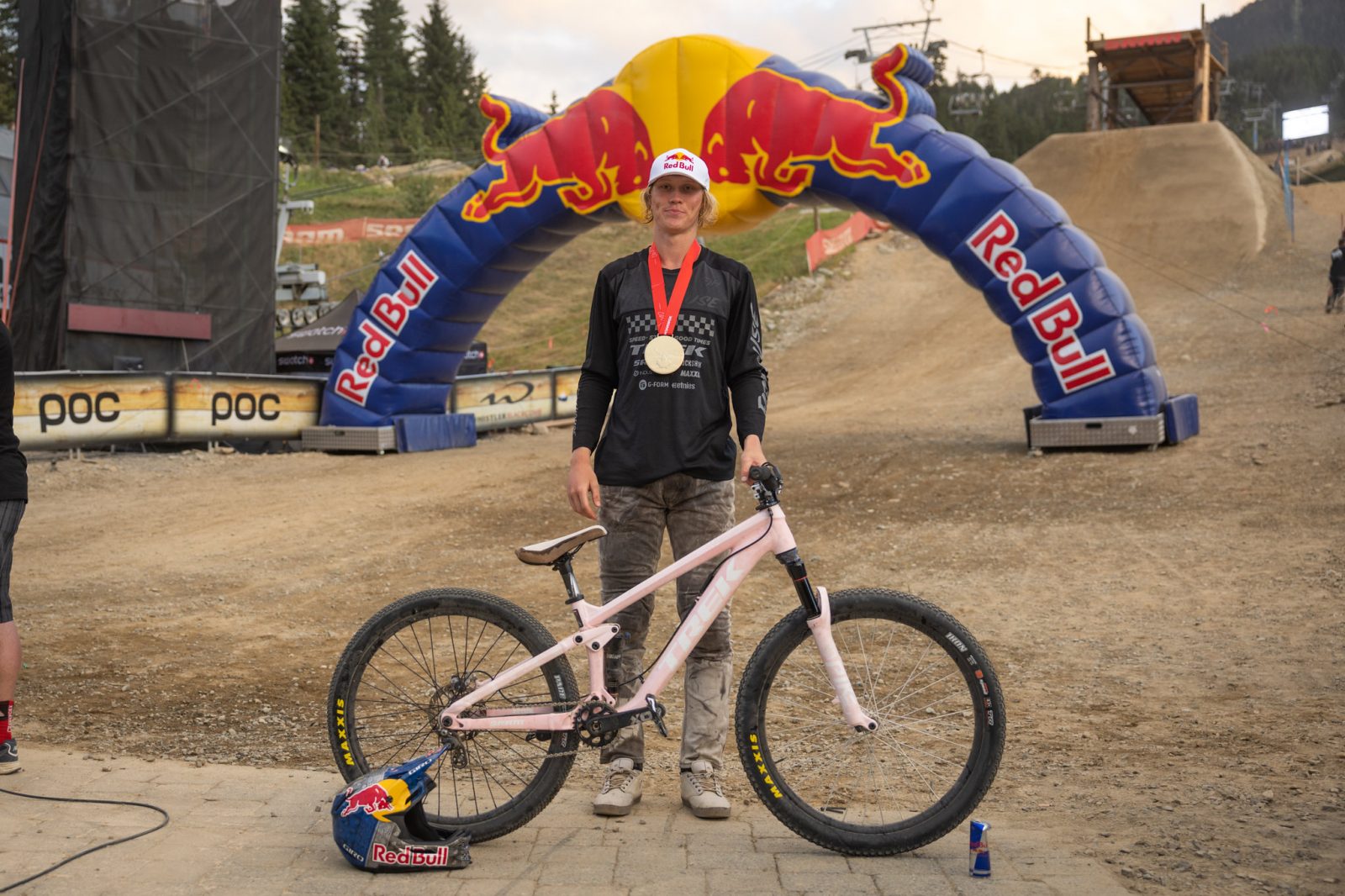 This is the second Crankworx FMBA Slopestyle World Championship (SWC) competition of the season. The next SWC comp will be Crankworx Cairns Slopestyle, this October 8th.  If Johansson wins either the competition in Cairns or the following one at Crankworx Rotorua, he will once again win the Triple Crown of Slopestyle title. The Triple Crown has only been claimed twice, once by Nicholi Rogatkin, and once by Johansson last year. His win today officially takes any other riders out of the running.

“Any course is an evolution of the past and with this course I think we will hopefully see a lot more unique things in the future,” Johansson said of the future of slopestyle. “It’s all trial and error. This course seemed to work so it’s going to be fun to see where the future goes.”