The Enduro World Series is excited to announce the relaunch of the biggest team competition in mountain biking – the Trophy of Nations.

Taking place on the iconic trails of Finale in September 2019, the Trophy of Nations will be a true celebration of cycling as riders cast aside individual glory in favour of teamwork and national pride.

Teamwork, strategy and sportsmanship will be pushed to the limit as riders have to work together in teams of three to race for a combined result. 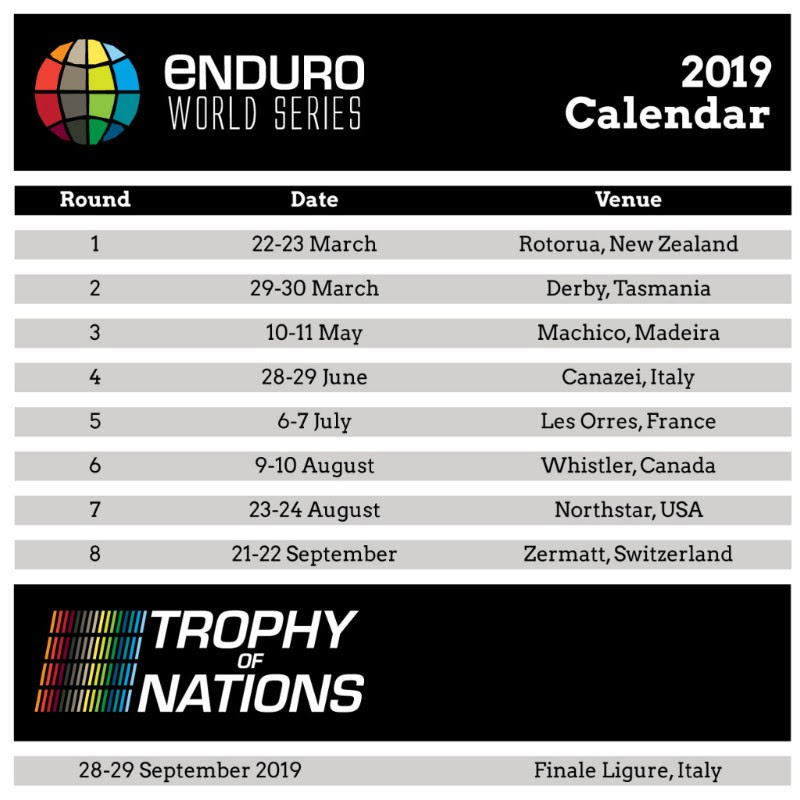 Featuring three categories, the event will pit nation against nation, industry against industry and amateur against amateur team. Each category of team will be made up of three riders. National teams will be made up from the top three riders of the newly structured Global EWS ranking from that country, and there will be both male and female teams.

And to put that in context, if the event had run in 2017 Team Australia would have been Sam Hill, Jared Graves and Josh Carlson taking on Jerome Clementz, Damien Oton and Adrien Dailly of Team France.

Amateurs riders can also enter their own teams of three with no restrictions on how they are compromised – giving them the chance to ride together to take on some of the biggest names in mountain biking.

Industry teams are being invited to get involved too, allowing mechanics and team managers to down tools, leave the pits behind and get out on the trails and show what they’re made of.

The Trophy of Nations will be a standalone event and will not contribute to a rider’s global ranking, taking place in Finale the week after the series concludes at round eight in Zermatt, Switzerland.

The Trophy of Nations will be part of a wider festival in Finale, with riders and fans promised an incredible weekend of racing and the chance to really get behind their country, team and fellow riders.

Chris Ball, Managing Director of the Enduro World Series, said: “We are so excited to bring a team competition into mountain biking at the highest level.

“Just thinking about who could be racing together in the national teams is mind blowing. It’s going to be so interesting to see how riders change their strategies in a team environment – they’ll have to really work together if they want to do well.

“It’s a great opportunity for amateurs as well – what could be better than riding Finale’s amazing trail network with your friends than getting to share them with the best riders in the world? This race has the potential to become one of the most exciting and interesting races of the year.”

Ugo Frascherelli, Mayor of Finale Ligure, said: “There’s no doubt that there is a special link between Finale Ligure and the Enduro World Series, we are honoured to have been chosen to host the 2019 Trophy of Nations. It will be another great chance for our territory to show our world class trails and services.”

And Andrea Principato, President of Finale Outdoor Resort, added: “After six EWS rounds in Finale, we raise the bar once more. It’s a great pleasure and a big responsibility at the same to organise a World Team event. It will be great to see pro and amateurs racing together and will be a great end to the season.”

The Trophy of Nations will take place in Finale on the weekend of September 28th, 2019 the week after the series finals in Zermatt, Switzerland.  The full 2019 calendar was launched over the last week, for full details please see the graphic below.