The much anticipated, brand new GT Force Carbon made a just-in-the-nick-of-time arrival onto my doorstep, one day before its launch. Somehow I managed to build it, knock out a few laps and get some riding clips and photos before the sun set. This is the first Enduro rated bike with a high pivot / idler combo that I’ve ridden, so needless to say I’ve been excited to check it out.

I’ll be spending more time in the coming months on the bike, but for now you can glean some first impressions from the video below as well as from slightly more thorough, but still brief “first ride” report below… 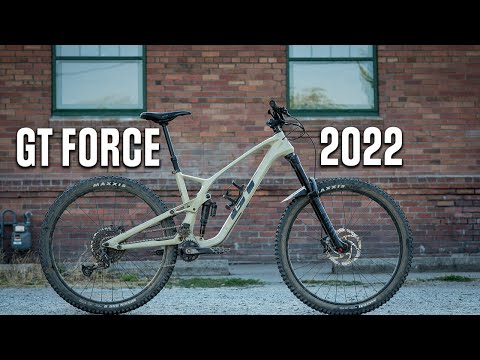 Up front is a RockShox Yari with 170mm travel and single adjustable compression and rebound knobs. 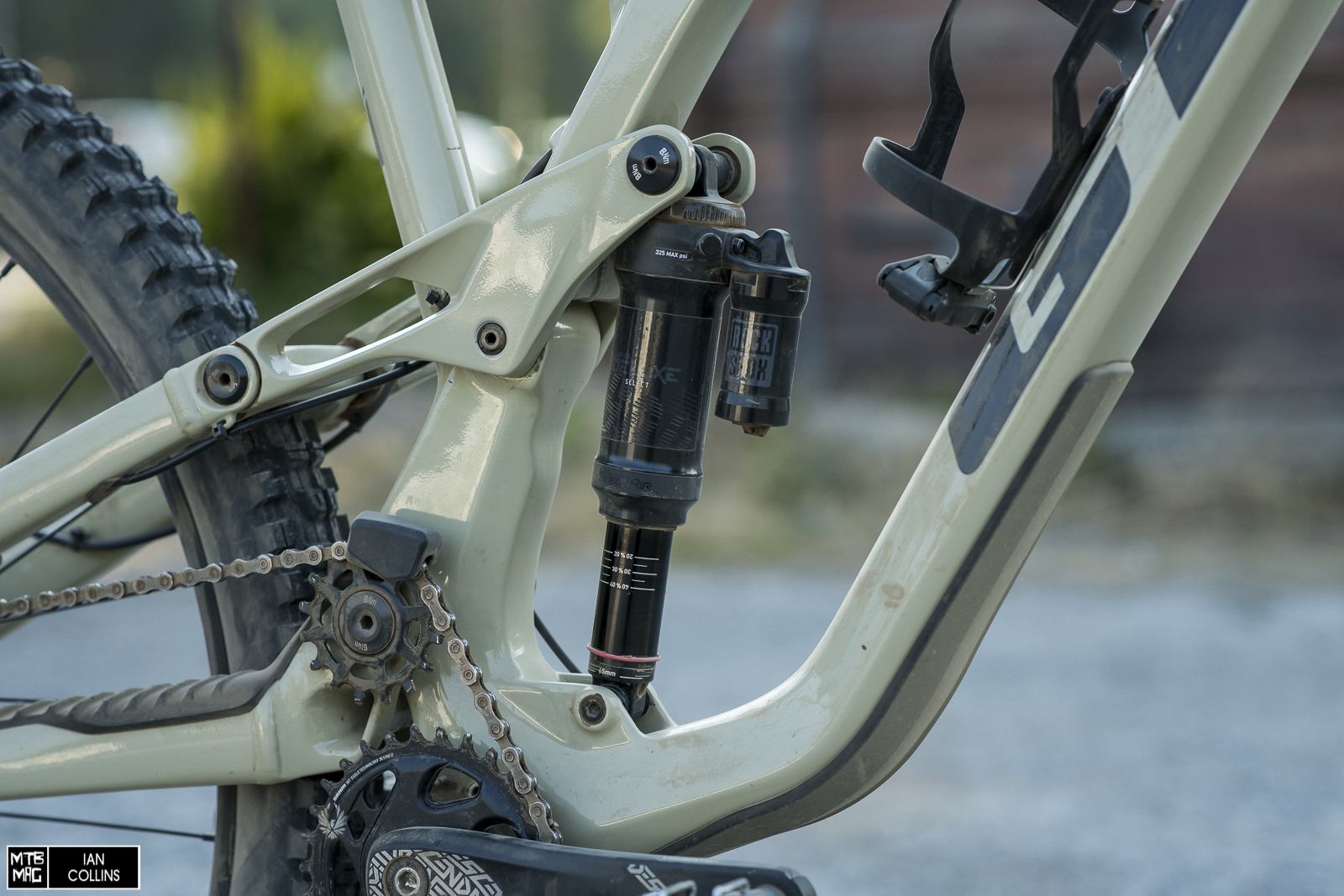 Out back is a RockShox Super Deluxe Select rear shock. It just has adjustable rebound – no compression or lockout – but its air spring is tunable with volume reducers. Props to GT for getting a nice low leverage ratio with its 65mm stroke. 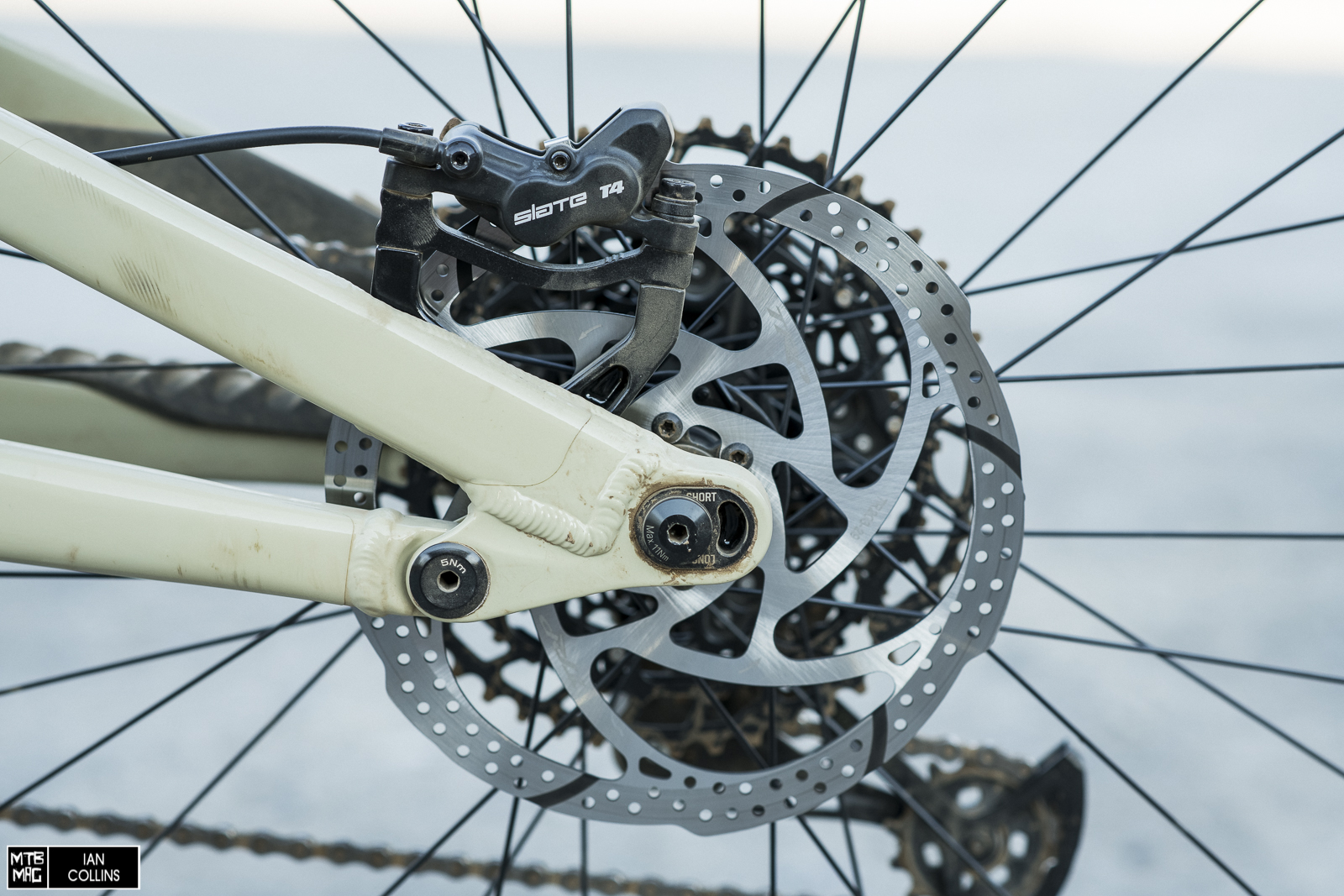 The TRP Slate T4 brakes were surprisingly good for a bike at this pricepoint. They don’t feel much different than my higher end DH-R EVO brakes that I use on my personal bike(s). 200mm rotors front and rear made for plenty of power and tool free adjustable lever reach was a nice surprise at this price point. 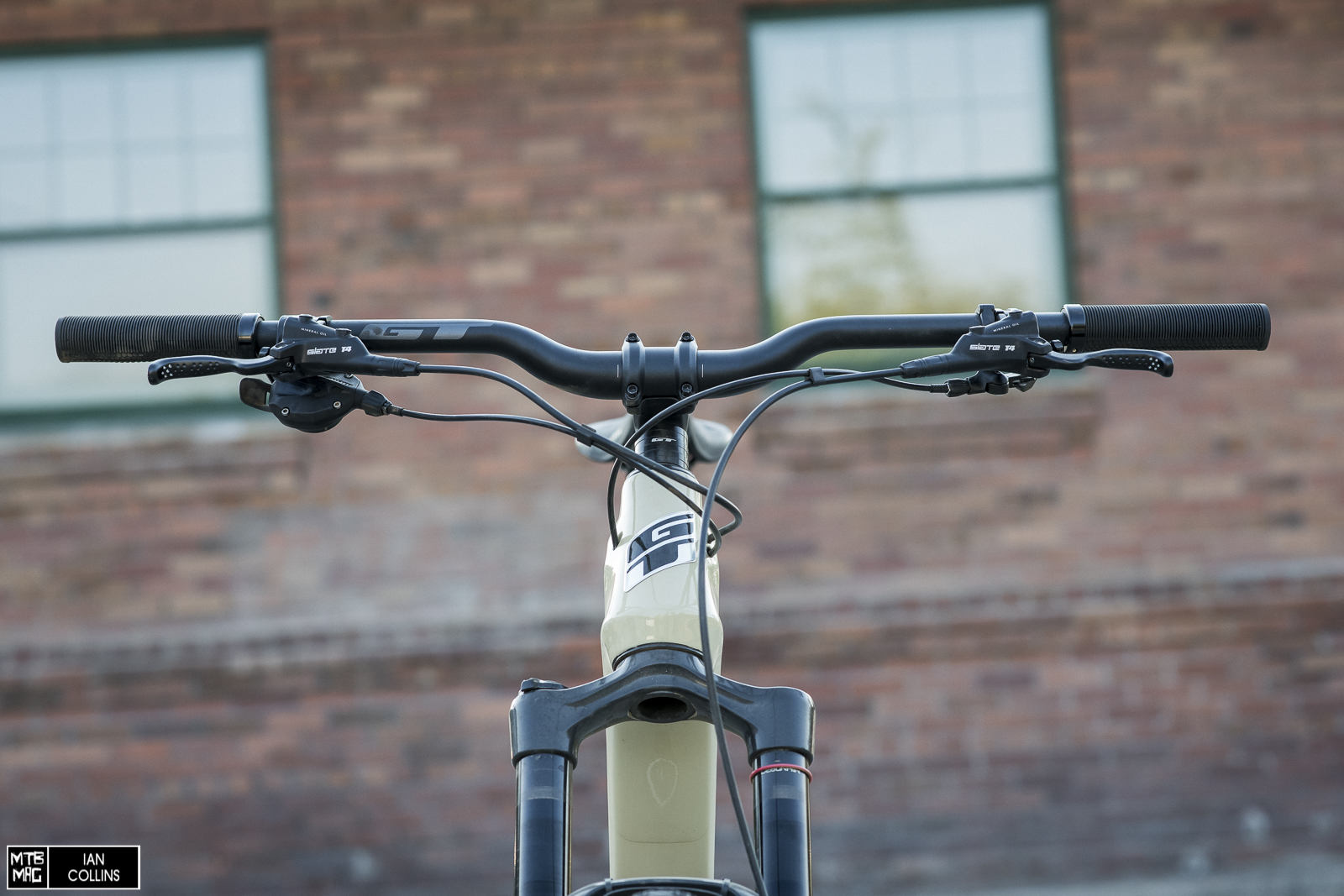 The Force had no shortage of spacers under the stem and a fairly tall rise handlebar – no complaints here as I like a tall front end! The parts are standard aluminum in house bits from GT, but the bar was a full 800mm width and the upsweep/backsweep felt comfortable.

Keeping with the cockpit theme, also a fairly standard in house dropper. It features 170mm travel and got the job done! WTB’s classic Silverado saddle is always easy to get along with. 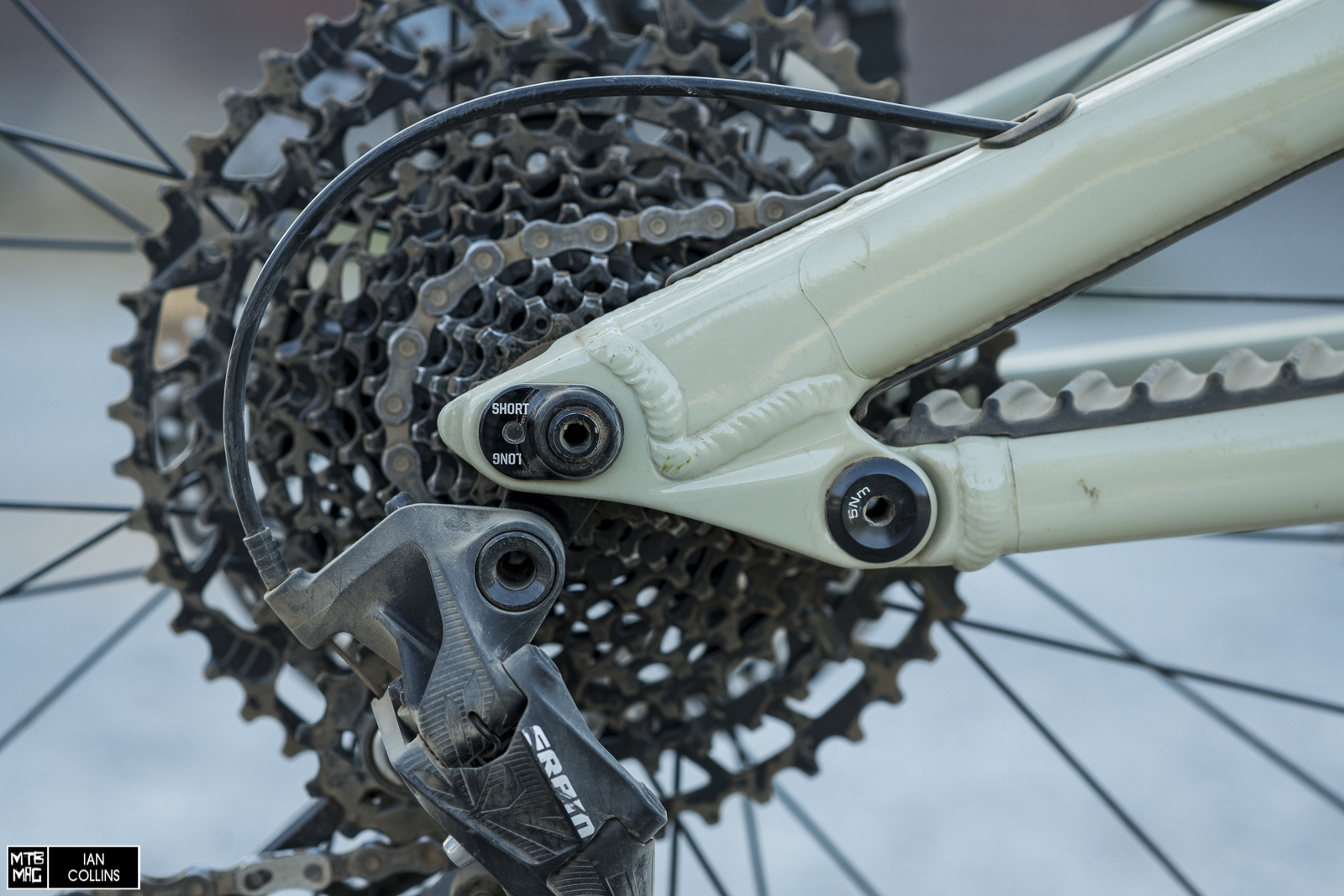 There is no high/low adjustment on the Force, but there is a short/long chainstay option. 435mm for short and 445mm for long. It’s a nice spread and both feel very good, with neither being too extreme in any direction. 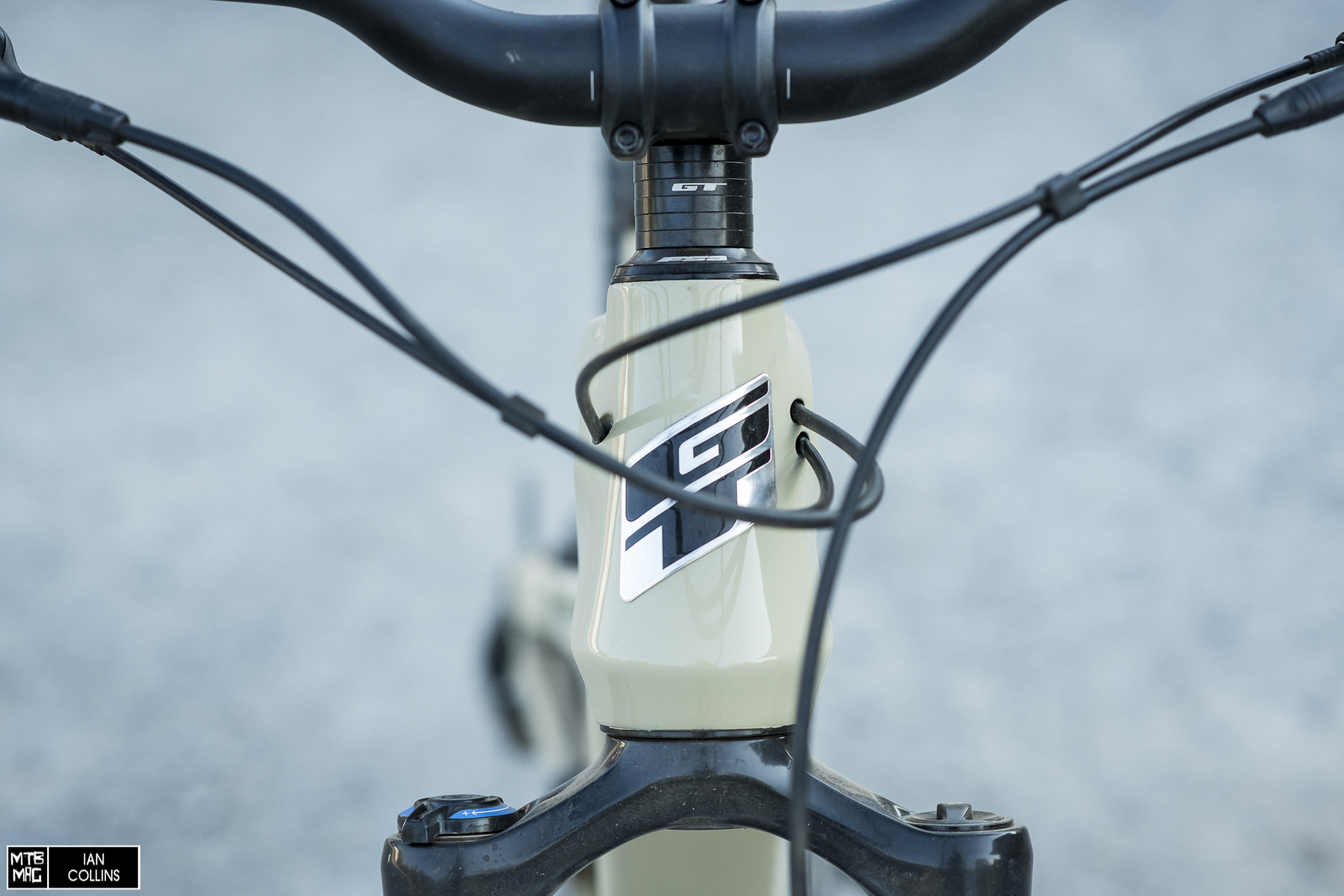 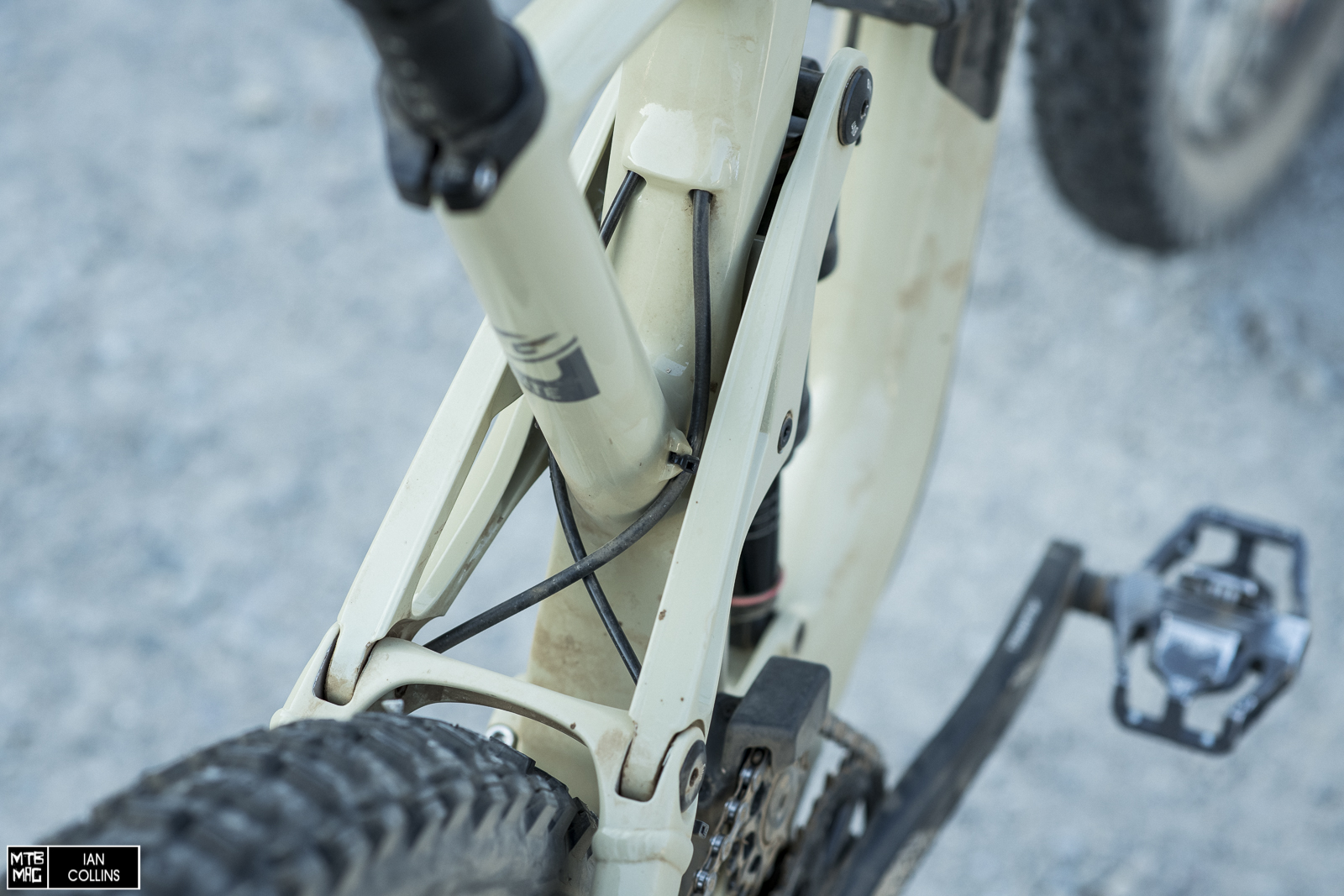 With the exception that it breaks around the seat tube before entering the rear end. 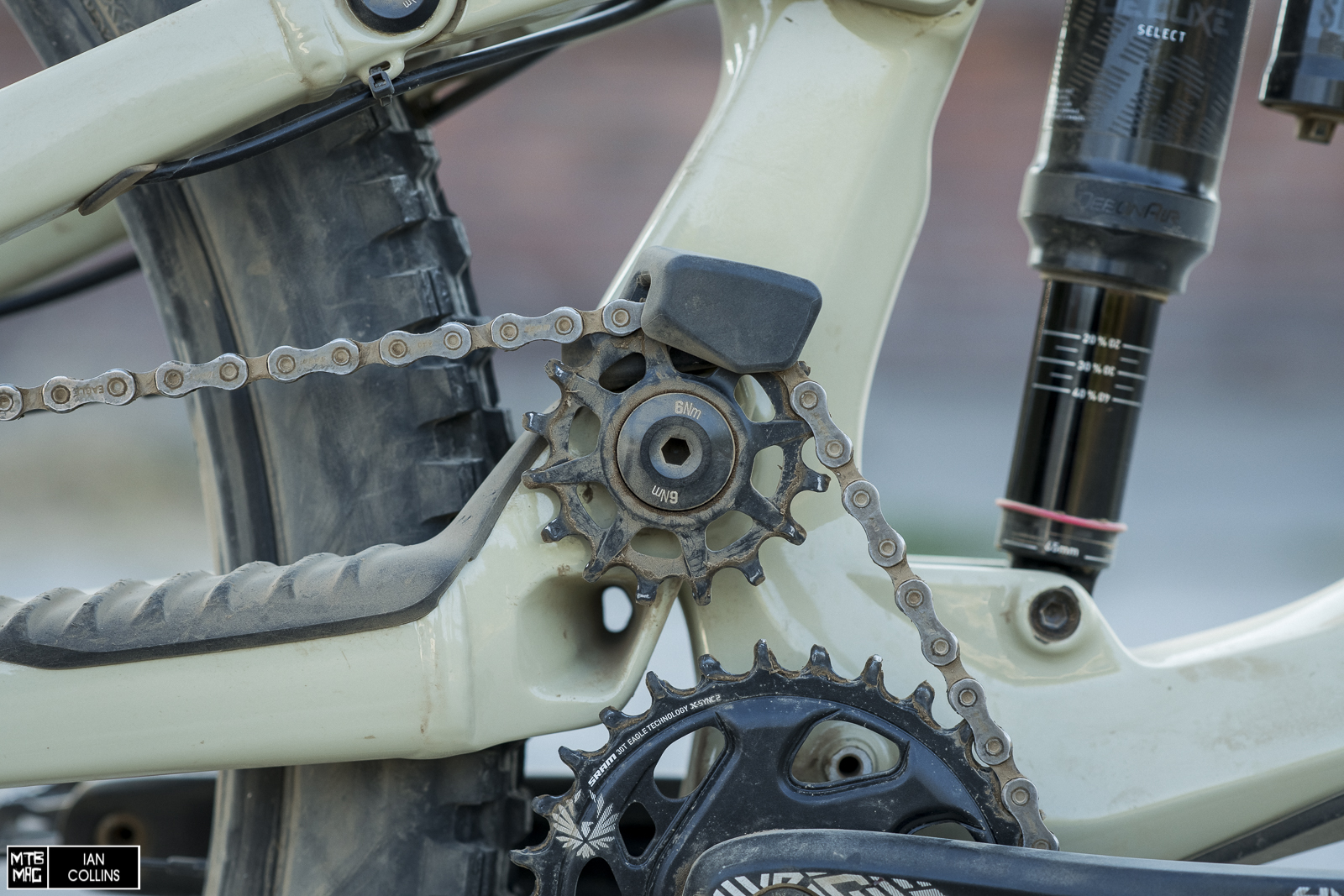 The idler in all its glory…The Force’s pivot isn’t freakishly high, but you can feel how well it carries speed on trail right away. 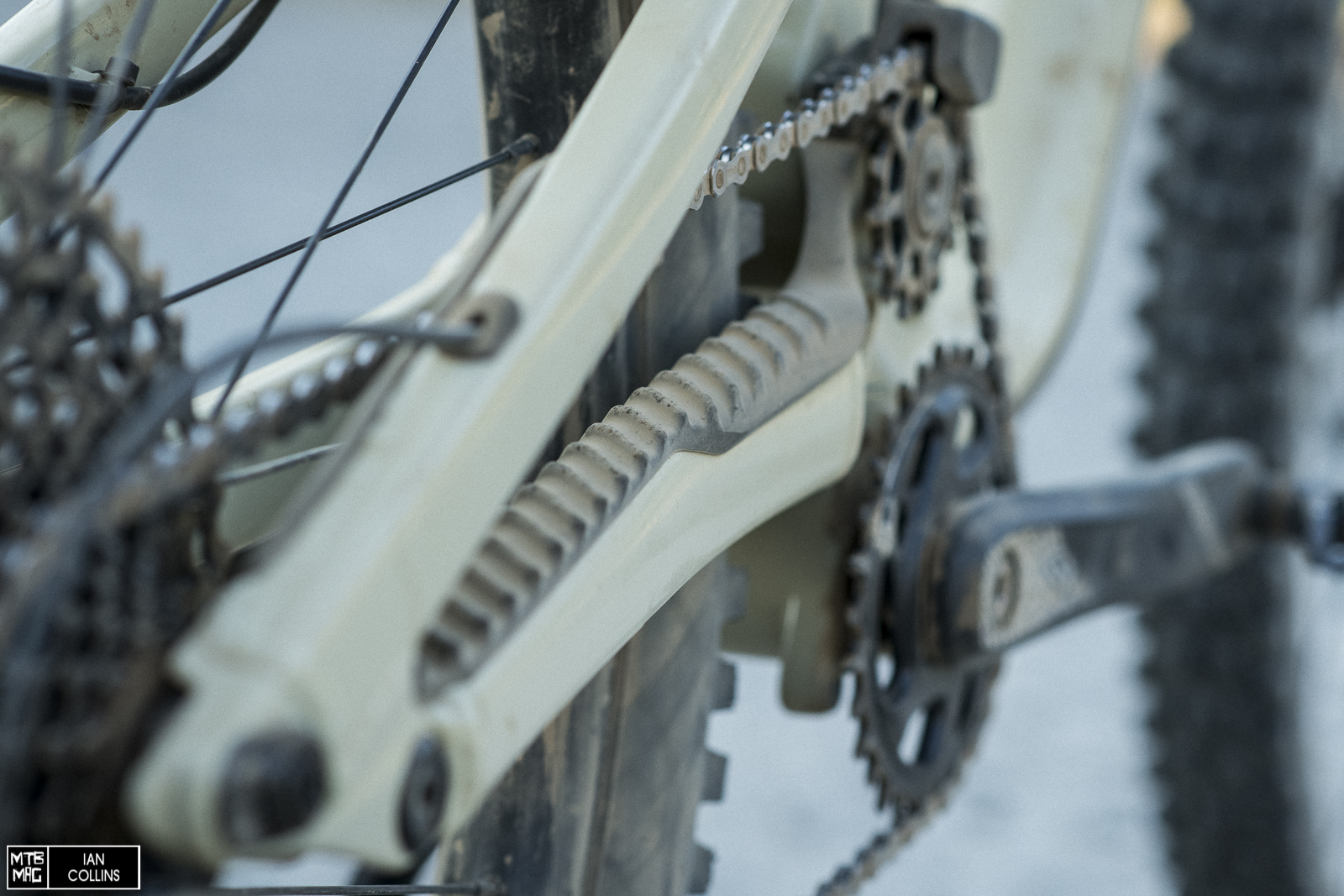 The chainstay protection is excellent. While the bike made some occasional noises, chain slap didn’t seem to be one of them. 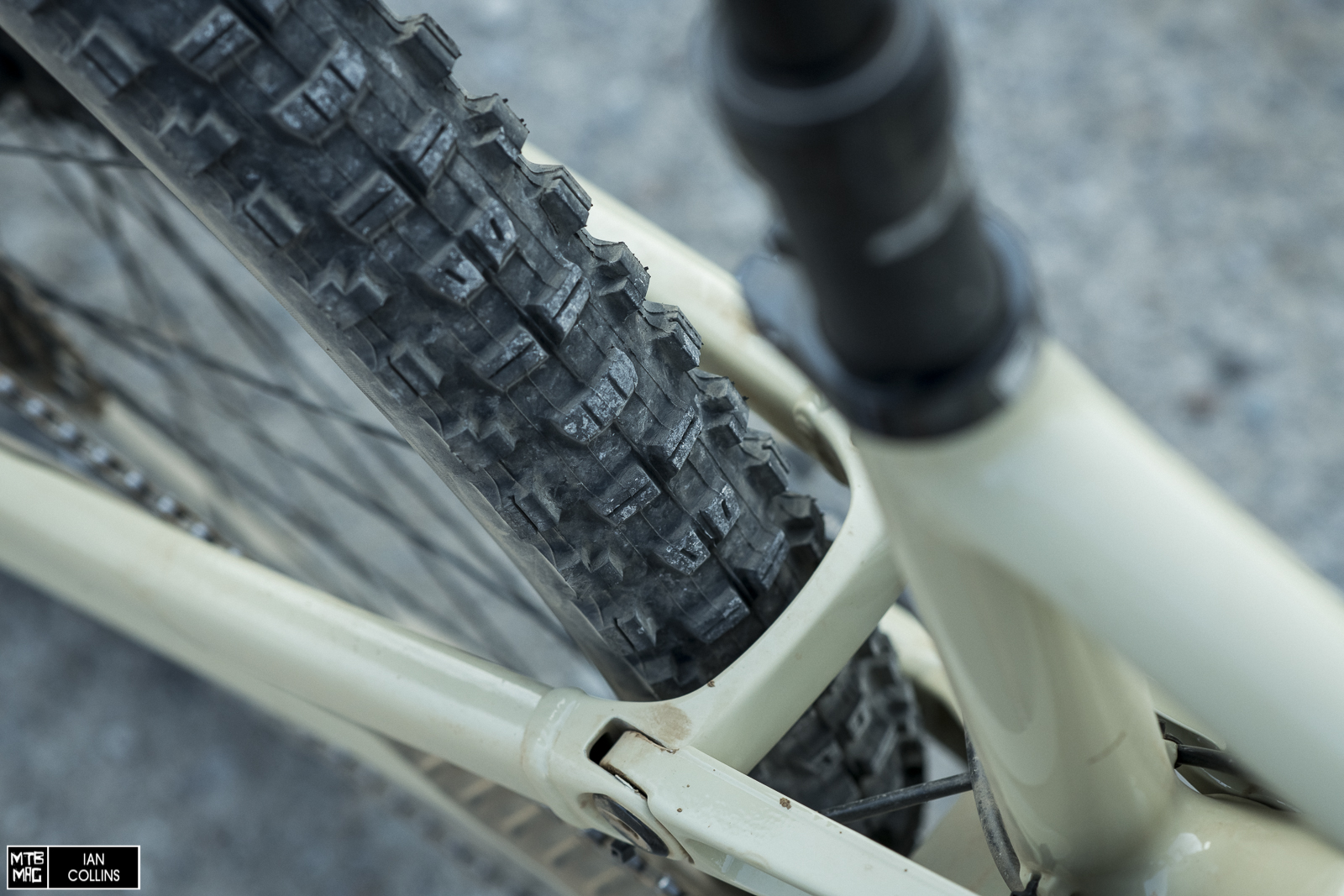 The Force comes spec’d with a Maxxis Assegai front and DHR2 rear combo with EXO+ casings. At this duty level, I’d like to see Double Down casings for a bit more flat protection. 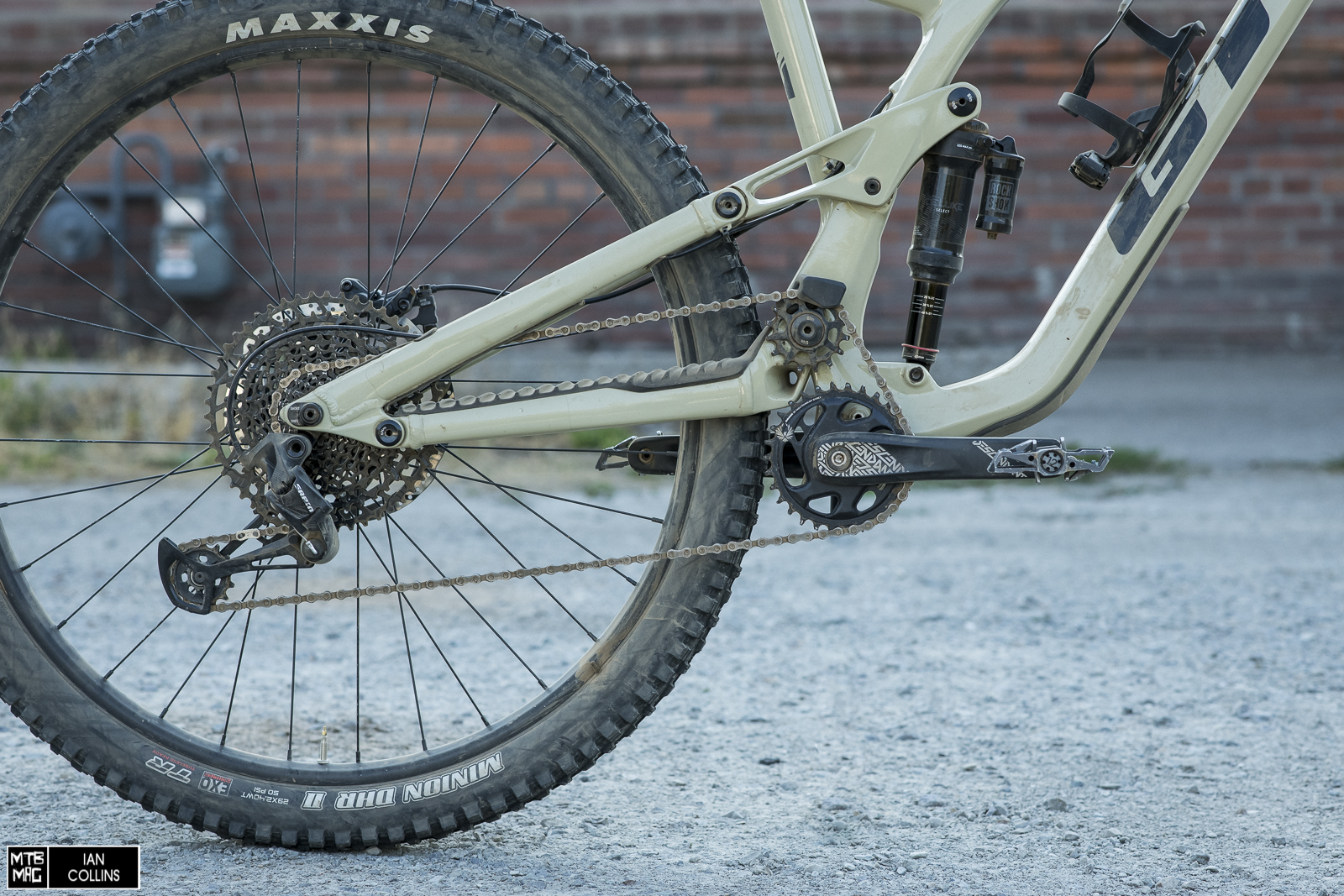 The drivetrain is a wallet friendly mix of SRAM’s SX and NX Eagle 12-speed drivetrain parts. I haven’t had the bike long, but so far the shifting has been fine, although time will tell how long these bits will hold up under heavy use… 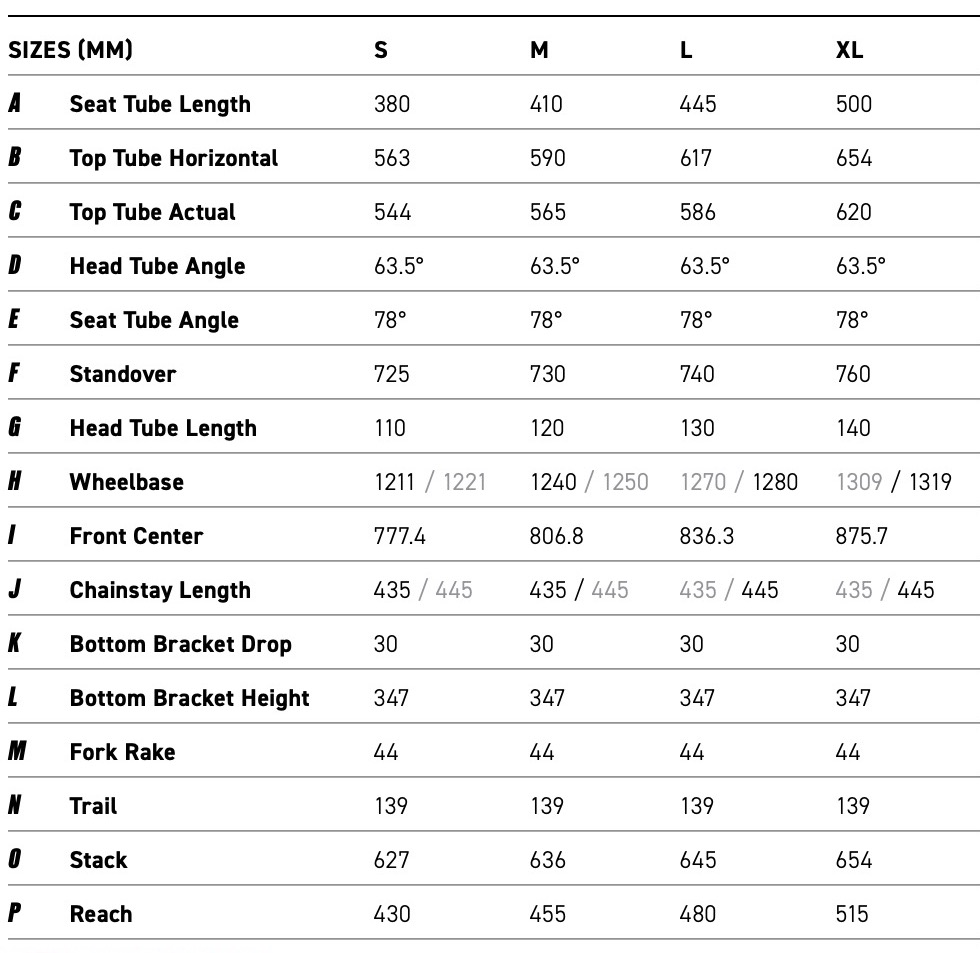 So, since I obviously haven’t had enough time to make a proper assessment of the bike in the long term, I’ll keep this pretty brief and focus on some ride characteristics as well as how strong I estimate the value to be. If it isn’t already quite obvious, I was very curious to see how this suspension layout would work out on trail. My handful of laps took place at Silver Mountain in Northern Idaho and at the moment it is dry, blown out and as rough as it gets – so it was pretty ideal testing ground for a bike built for the rough.

First off, the size Large fit me perfectly and I would not change one single thing regarding the geometry – I truly think GT aced that aspect. The 78º seat tube angle put me in a very comfortable, upright and forward position on the climbs helping the bike climb far better than most bikes that are this long legged.

On the descents the other numbers were all very well balanced as well – particularly the 63.5º head angle and 480mm reach. I did get a quick chance to swap to the 435mm chainstay. I think that I preferred it due to the fact that it makes the bike a touch more playful and easier to manual – both areas where high pivots can typically lag. With that in mind, if I were racing I would surely pop it into the 445mm setting, and doing the swap is a breeze. 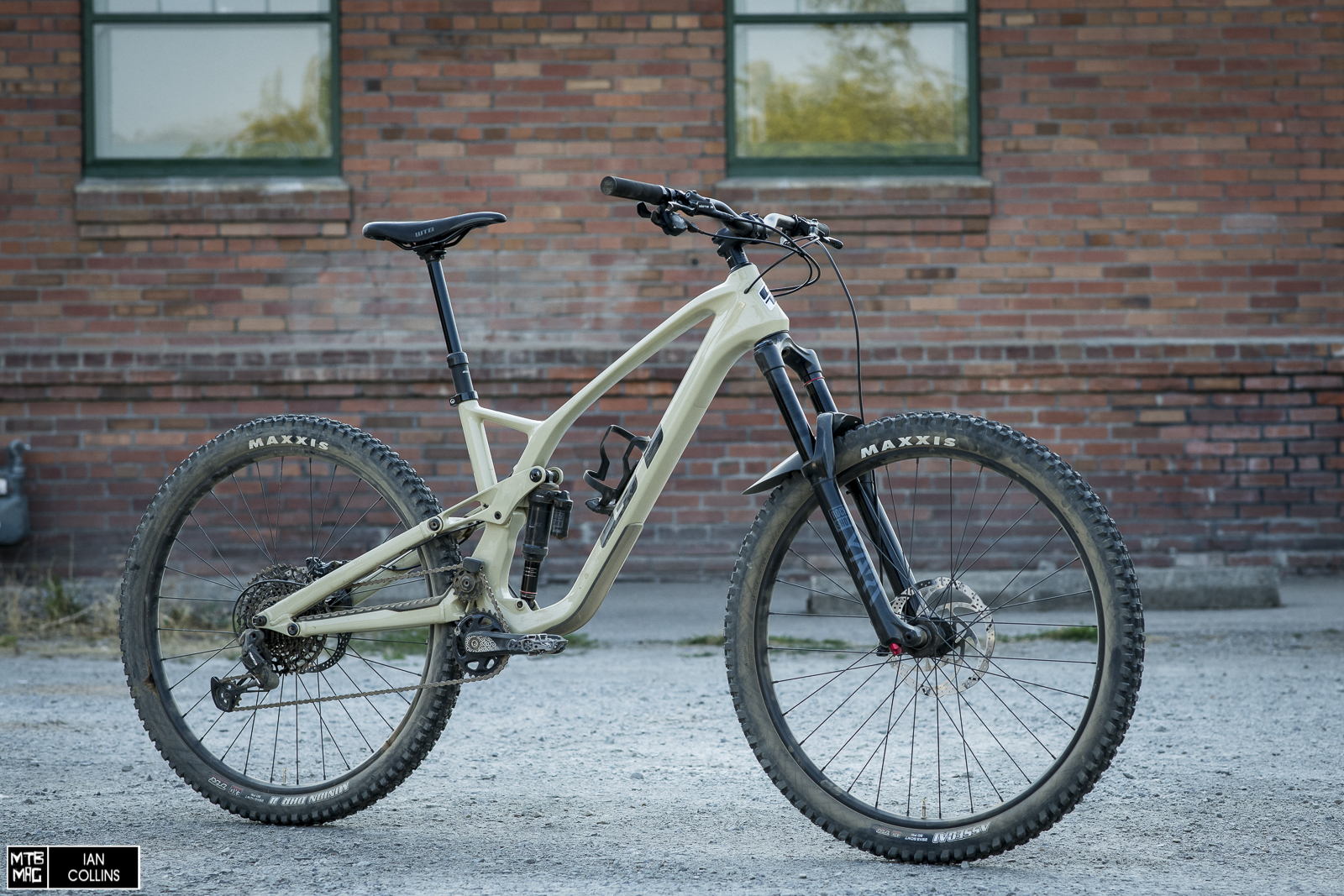 In terms of the suspension itself, so far I’m very impressed. Firstly, by how well the bike carries speed over rough terrain – which seems to be the entire point of a high pivot bike with an idler. However, I think GT has done a great job on the tuning and kinematics end as well. The lower leverage rate meant that even with an entry level rear shock, the suspension performance was very solid. It also meant that I only needed 185 PSI in the rear shock, which makes the shock’s life less difficult.

I haven’t gotten a chance to crack open the shock, but out of the box the amount of volume spacers seems just right. The bike is approved for both coil and air, and perhaps in due course I’ll be able to test it with a coil. For the time being I can say that it nicely checks the three boxes of being fairly sensitive off the top, supportive in the middle and very well resistant to bottom outs on the big hits. Lastly on suspension, although the rear shock doesn’t feature a lockout it straight up does not need one. The Force is a crazy efficient climber from a kinematics standpoint as well.

In terms of the parts choice, I think GT did a great job at putting together a nice package for the money. Based on the pricing for all three models, you can see that they’re working hard to compete with the consumer direct brands in offering high value proposals. A few notes… 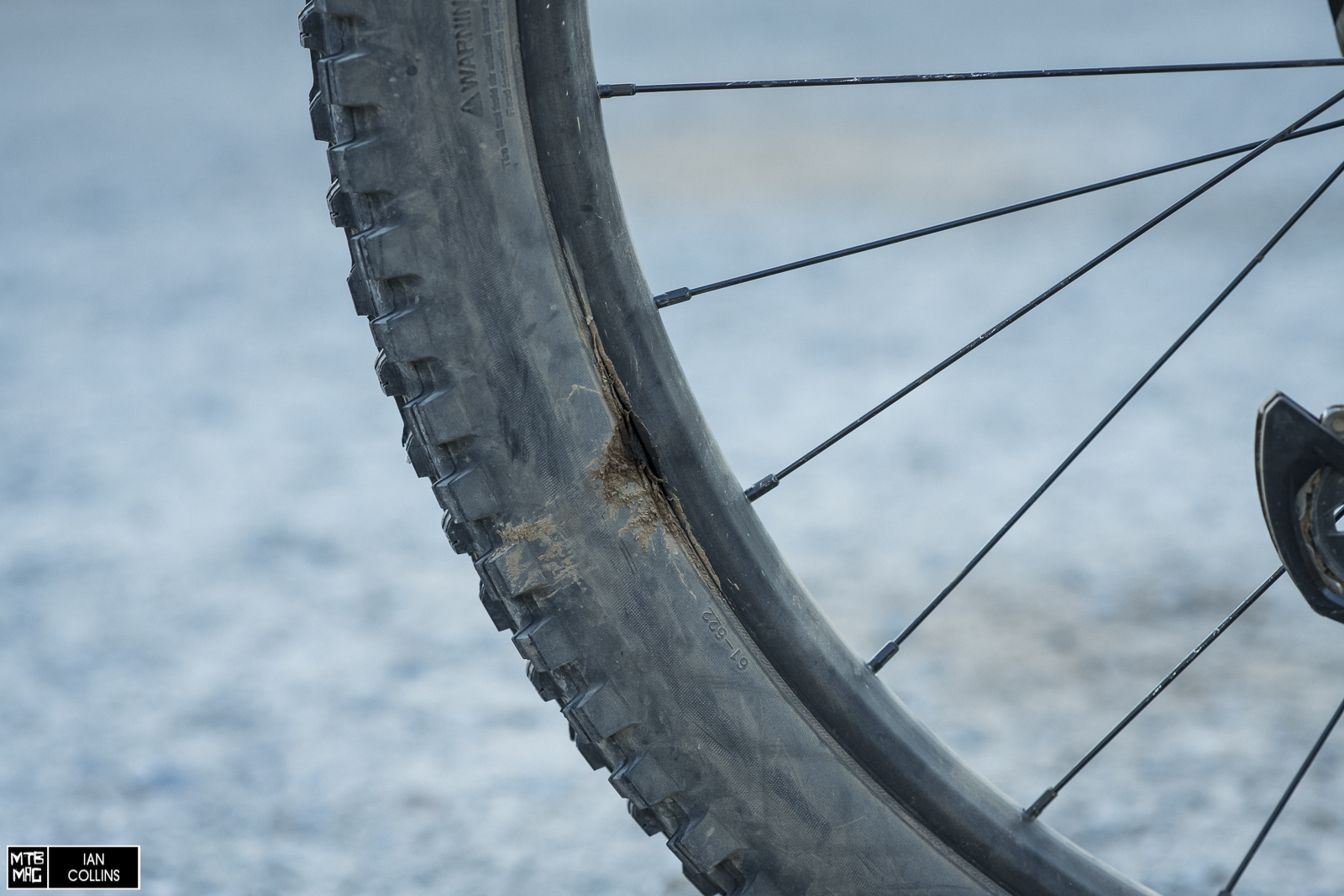 The TRP Slate brakes were very impressive – as noted above – they feel like a flagship brake on trail, which was refreshing. The cockpit feels pretty good despite not being made from anything magical – I quite like the WTB Silverado saddle and Fabric grips. GT didn’t cut corners and put a narrow handlebar or a shorter travel dropper post on, and when brands do things like that it takes the bike out of its intended category, which is annoying.

So kudos to them for the full width bar and long travel dropper! The drivetrain got the job done but made some noises under heavy riding – time will tell how it holds up in the long run, but I’d be lying if I wasn’t slightly concerned with long term abuse. The Yari fork was surprisingly good actually, and one of the things that could be upgraded later on down the line with a Charger 2 damper. My biggest gripe would be that on a bike this aggressive, I’d prefer to see heavier duty tire casings.

Granted, given my rugged local terrain I should have thrown some tire inserts in, but I was pinched for time and generally try to get my initial thoughts on a bike in bone stock form. So, on my first outing I did flat and incidentally put a decent sized dent in the rear rim.

While time will tell, all in all this seems to be a great package. There are some parts that will need upgrading in the future with use and abuse, but GT has done an excellent job with the frame from front to back. Building off of a very nicely designed carbon fiber frame with great brakes, a solid front and rear suspension and cockpit parts that you can’t really turn your nose up at is a great start. Having a great base means that upgrades in the future won’t hurt your wallet.

Out of the box it’s a very solid bike and a good foundation for an enduro rider who frequents the bike parks. So far, the biggest highlights seem to be the geometry and suspension. We’ll follow up in the coming months with a more comprehensive test…