It was only a matter of time until Santa Cruz jumped into the e-bike game. Interestingly, they’ve done so rather quietly, and to some surprise, have found a way to incorporate their latest “Lower Link VPP” suspension layout into the mix. From a design standpoint, that layout just doesn’t seem like it would play nice with a motor and a battery to contend with, but alas it has…surprisingly nicely as well. Anyhow, we got a chance to get some saddle time on the new Heckler, a bike that Santa Cruz hasn’t produced since 2013. With 27.5″ wheels and 160mm/150mm travel, it falls in line with a Bronson, but with pedal assist. Read on for our initial thoughts on the latest creation from the coastal Californian brand… 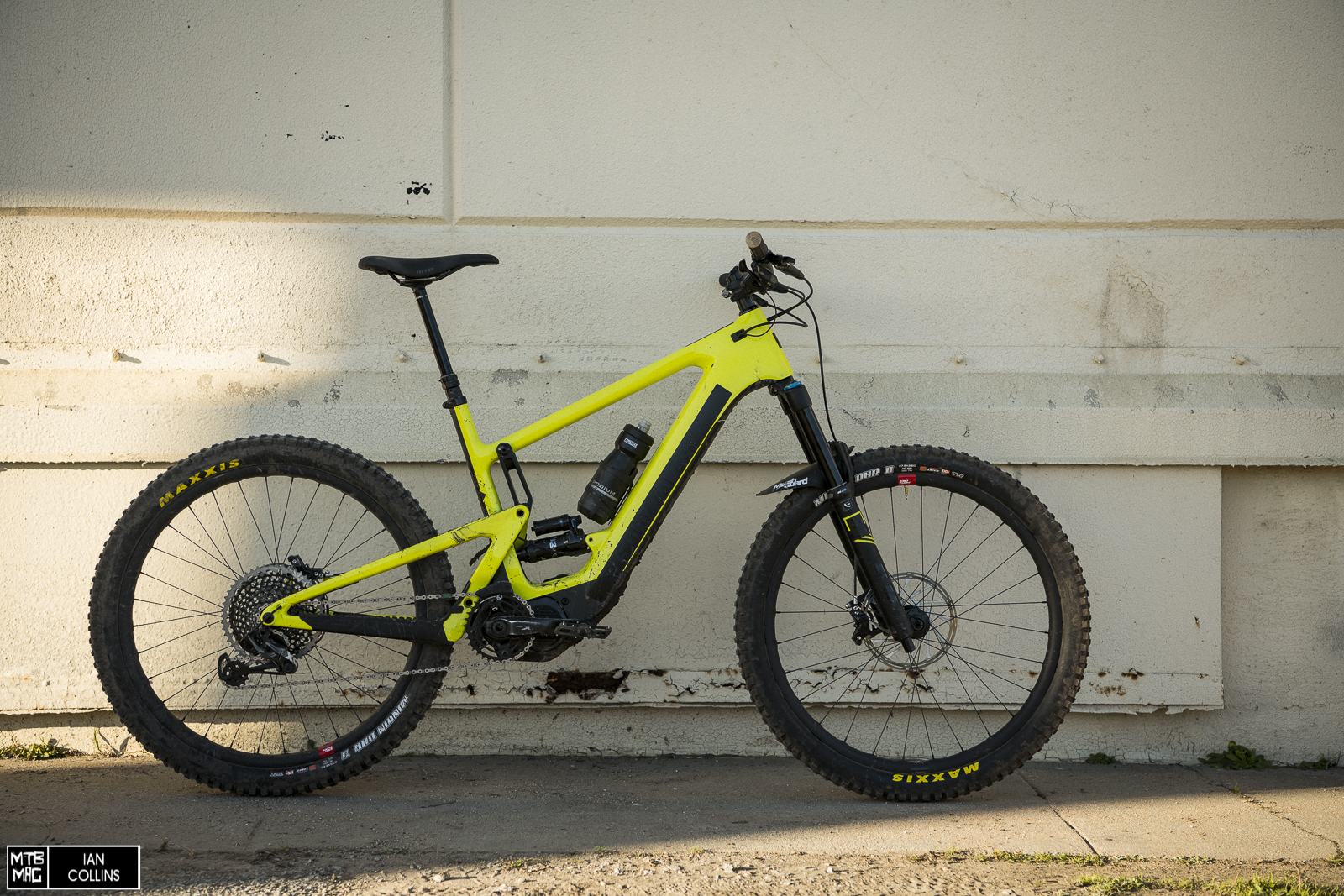 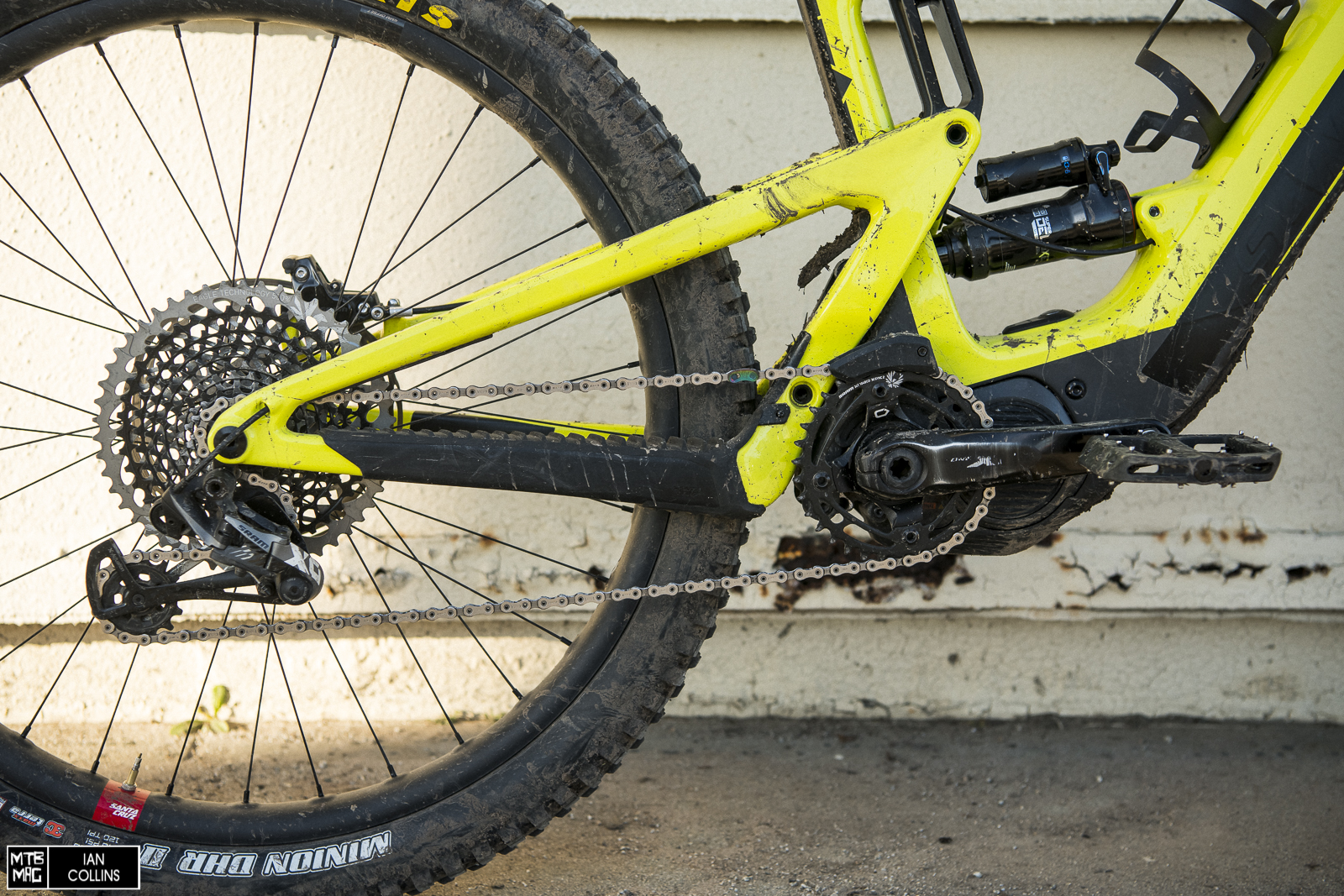 Yep, it all fits! Santa Cruz chose a Shimano motor with a 504Wh battery and managed to keep the chainstay length down to a respectable 445mm – which strikes a nice balance between stability while climbing under power and maneuverability on the downhills. As for parts, the drivetrain is a combination of SRAM’s Eagle XO1 12-speed bits and Shimano Deore XT cranks in a 165mm length. 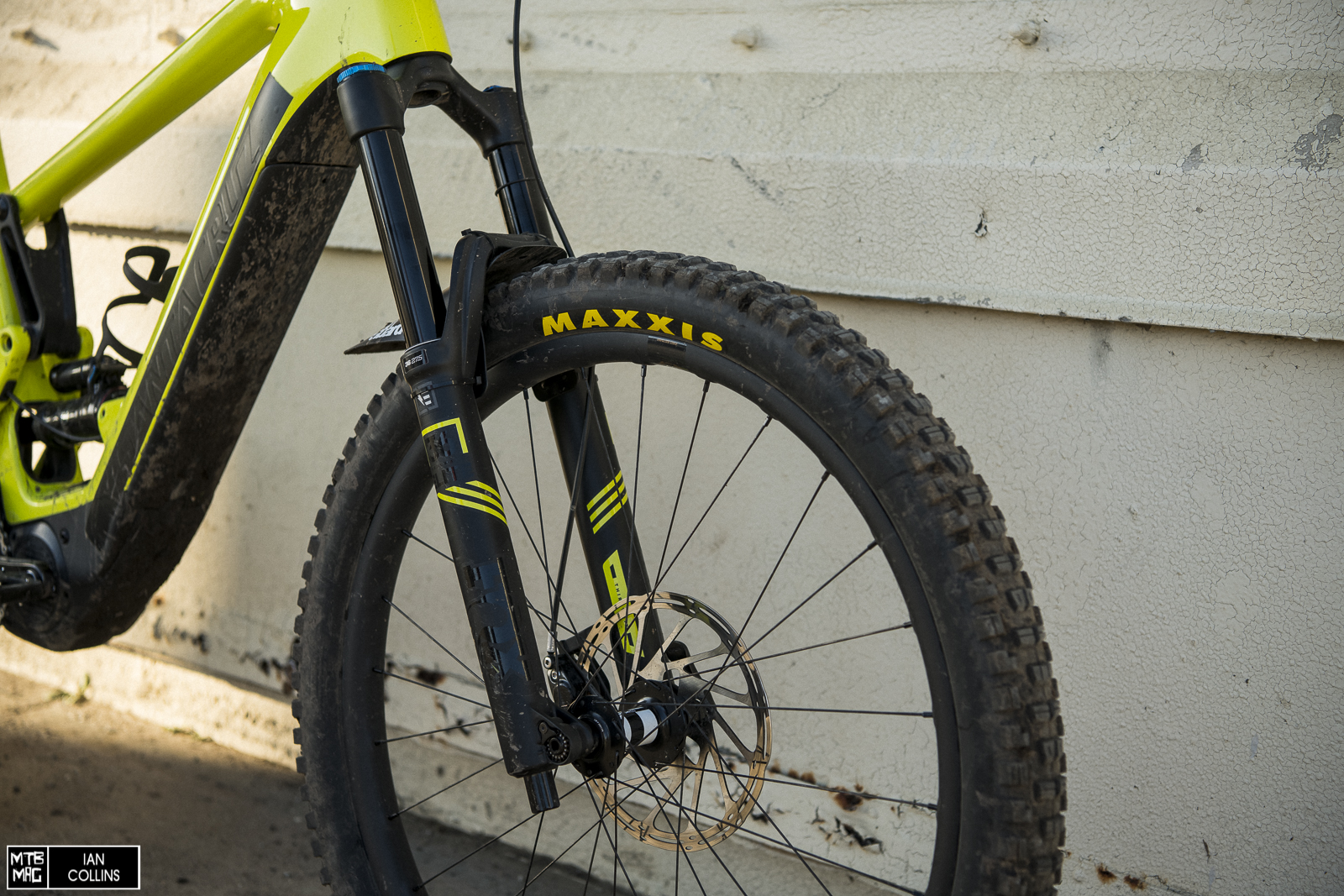 A 160mm travel Fox 36 Performance Elite graced the front end of the bike in test here. High and low speed compression and rebound damping provide loads of options for tuning. Maxxis Minion DHR II tires are spec’d front and rear in a 2.6″ width. 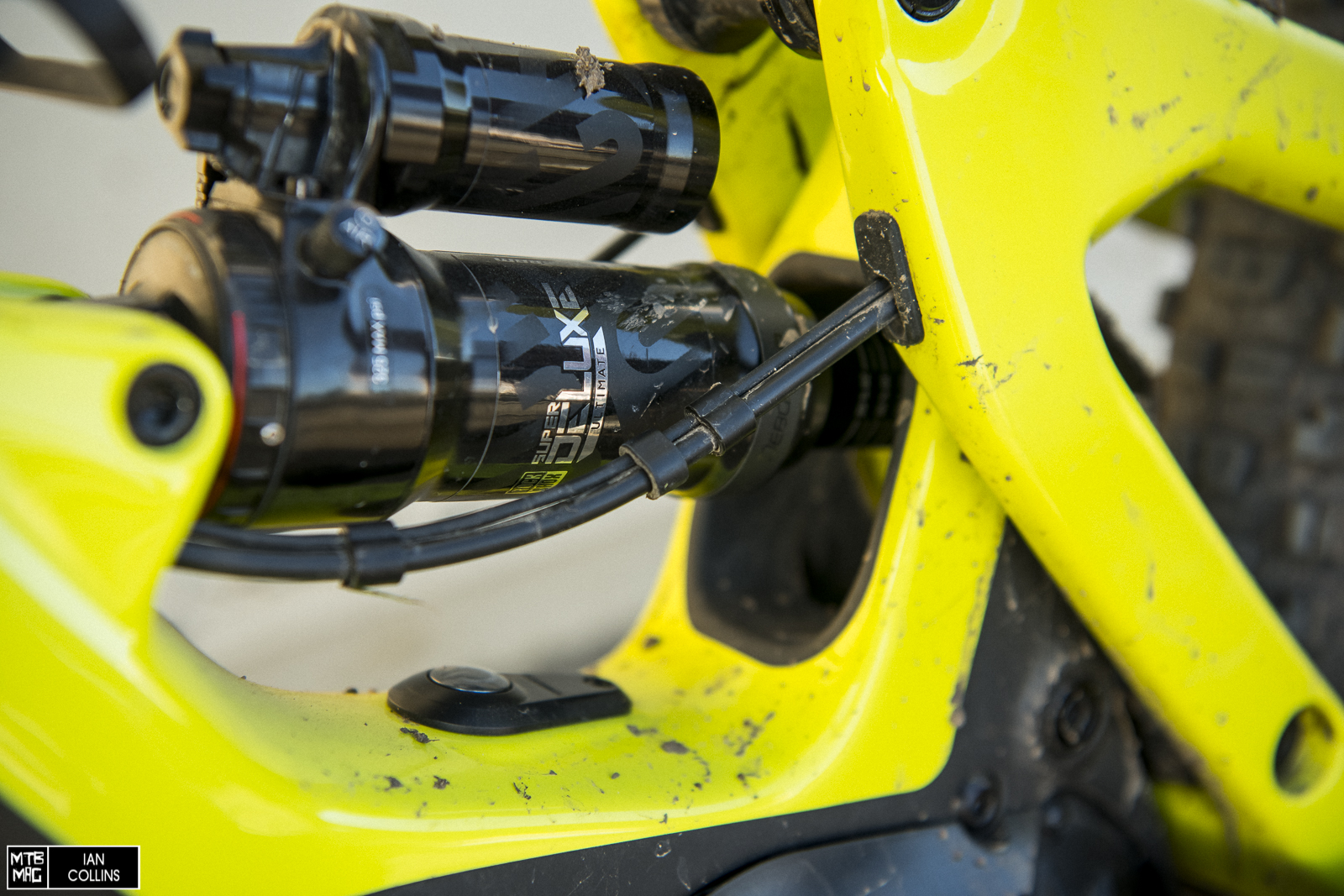 RockShox’ excellent Super Deluxe Ultimate rear shock is featured out back with externally adjustable low speed compression, rebound and a lockout switch. The shock has metric measurements and standard eyelets. 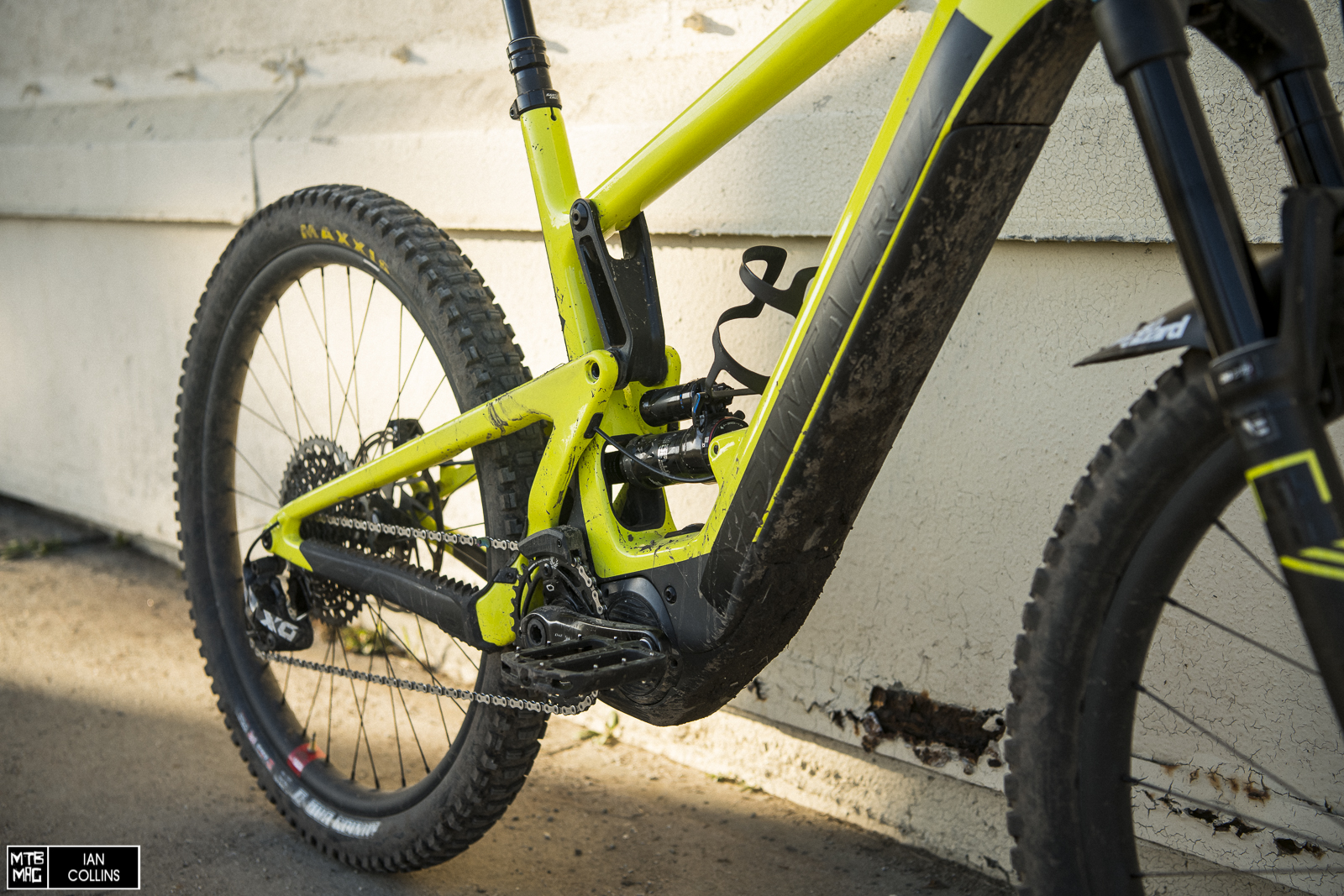 The battery is easily removable and separated from the downtube via a single 4mm allen key. This exposes the cables and hoses routed through the frame as well. A full size water bottle fits no problem as well. 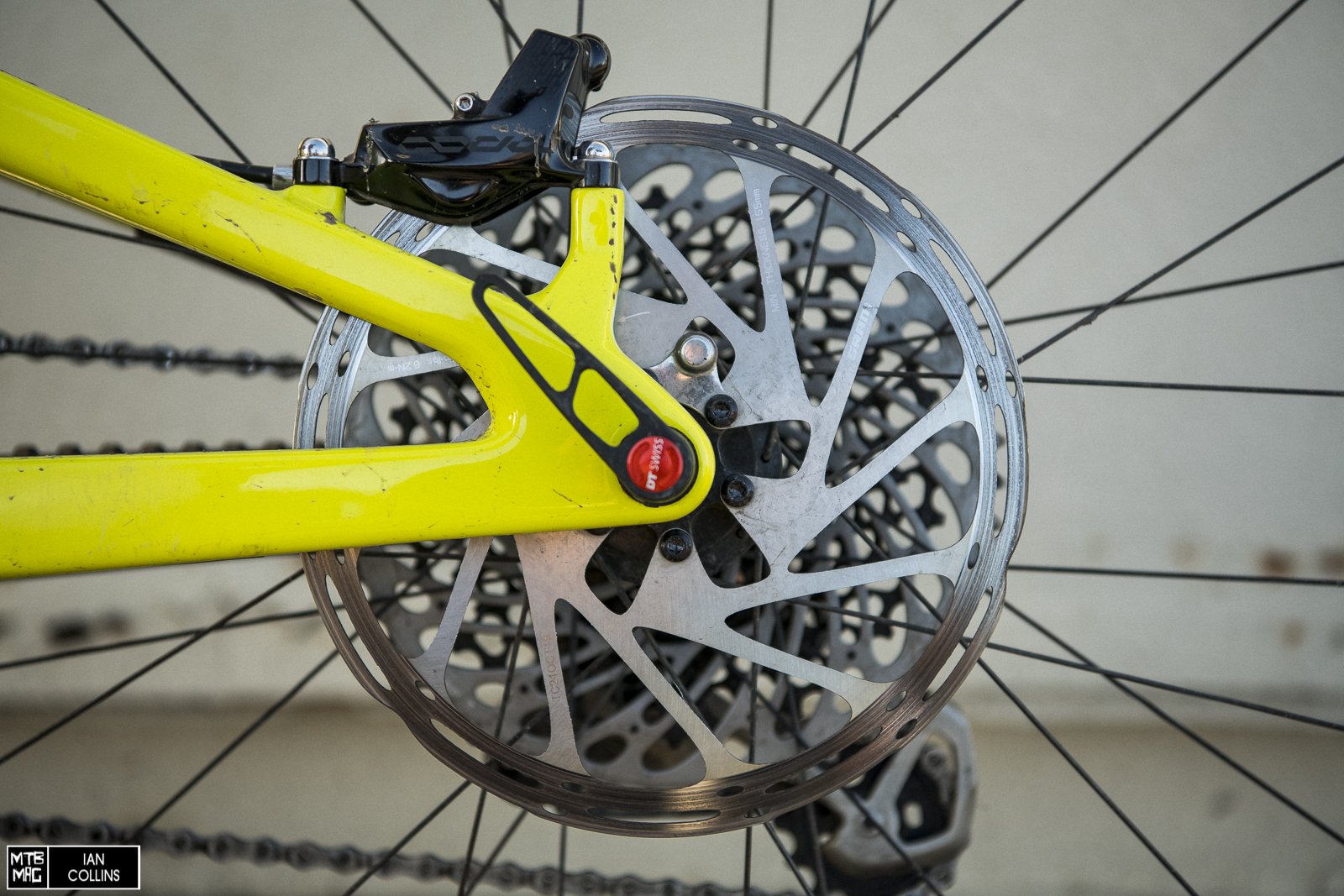 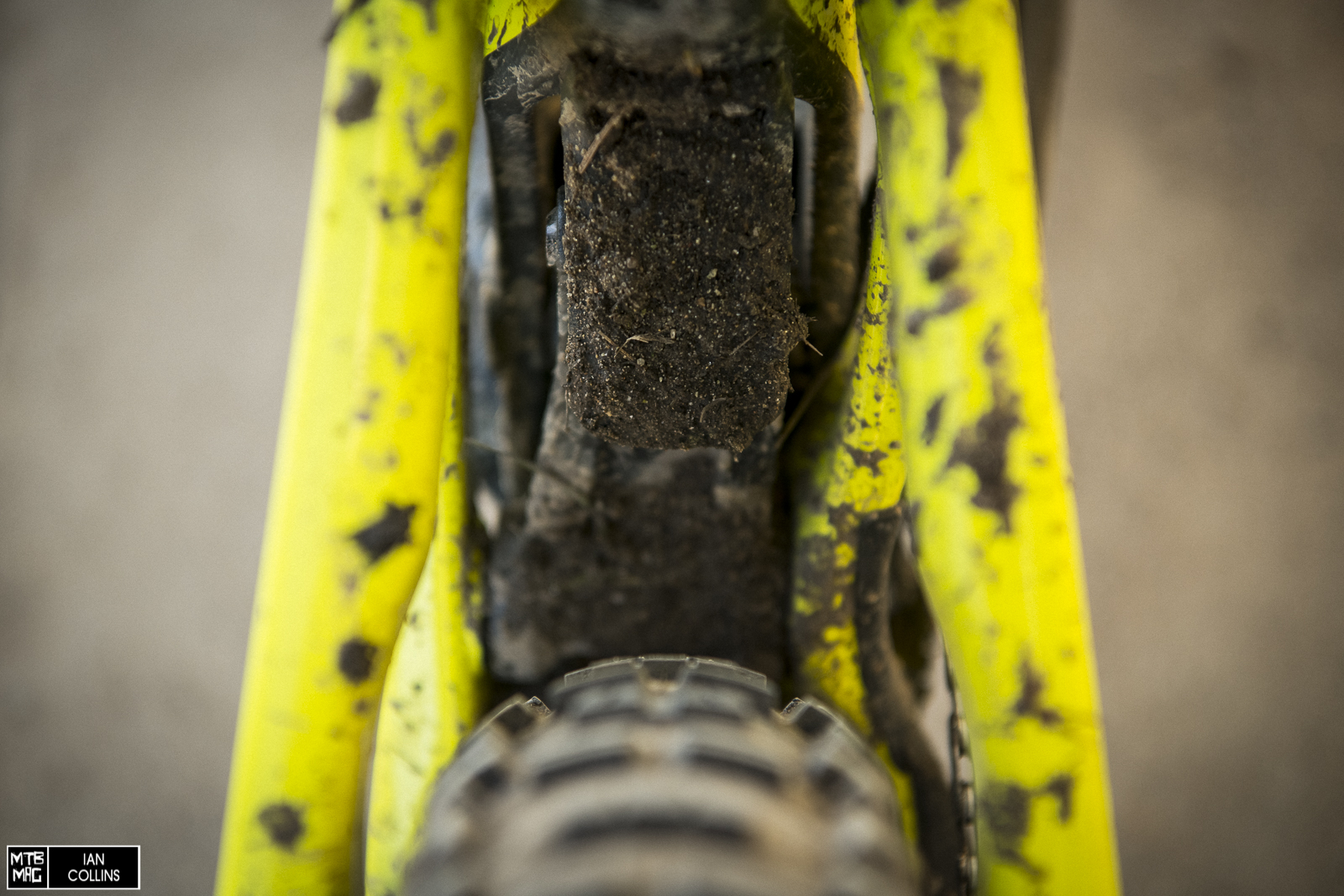 There is ample tire clearance even with a rather wide 2.6″ tire, and although a bit difficult to see, there is a roost guard for the rear shock, covered in…roost! 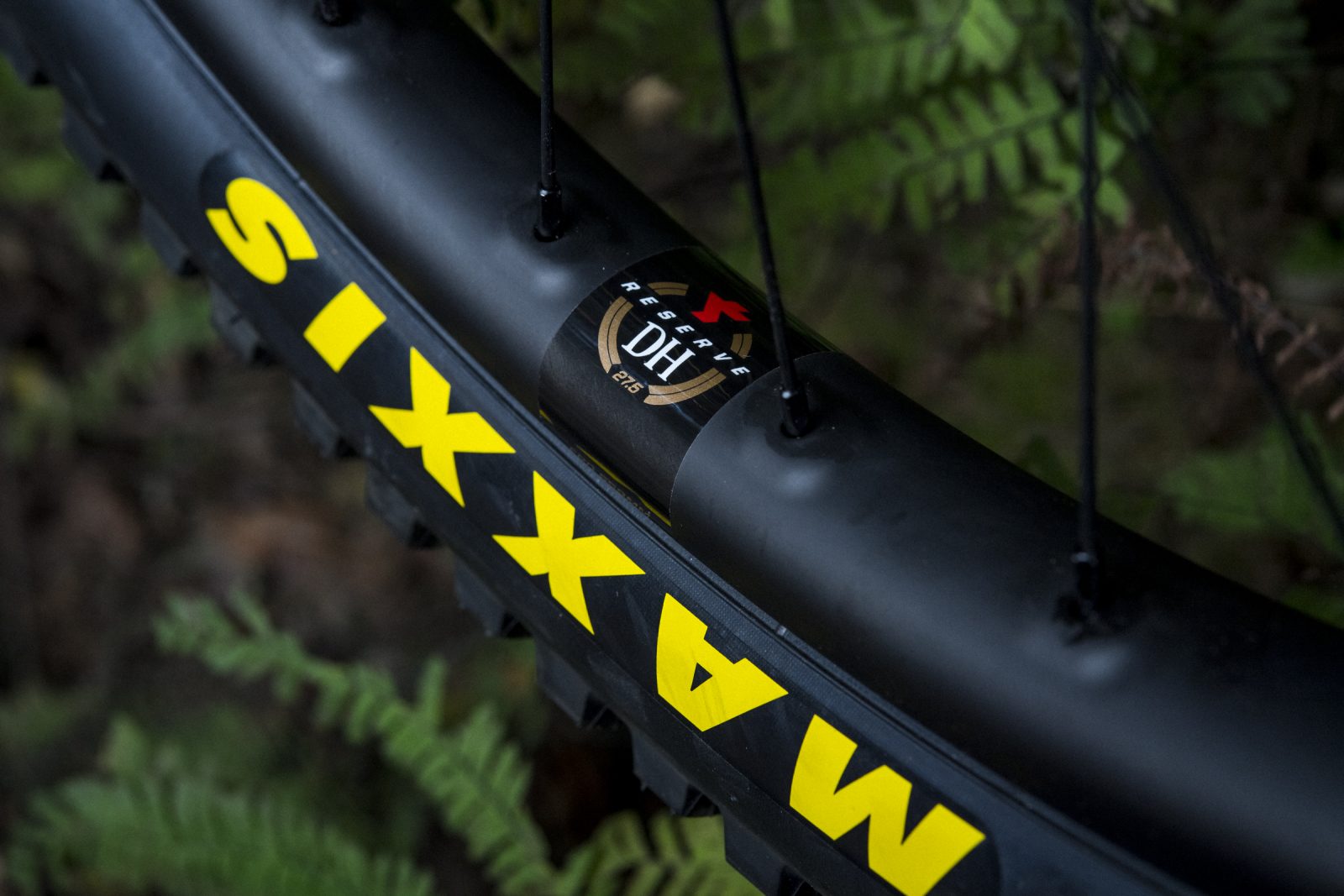 Santa Cruz just announced the availability of their excellent Reserve rims in the DH version in 27.5″. The rims were previously available only in 29″…Well, now we might better understand the timing as the Heckler is spec’d with these rims, which are surely up to the task. 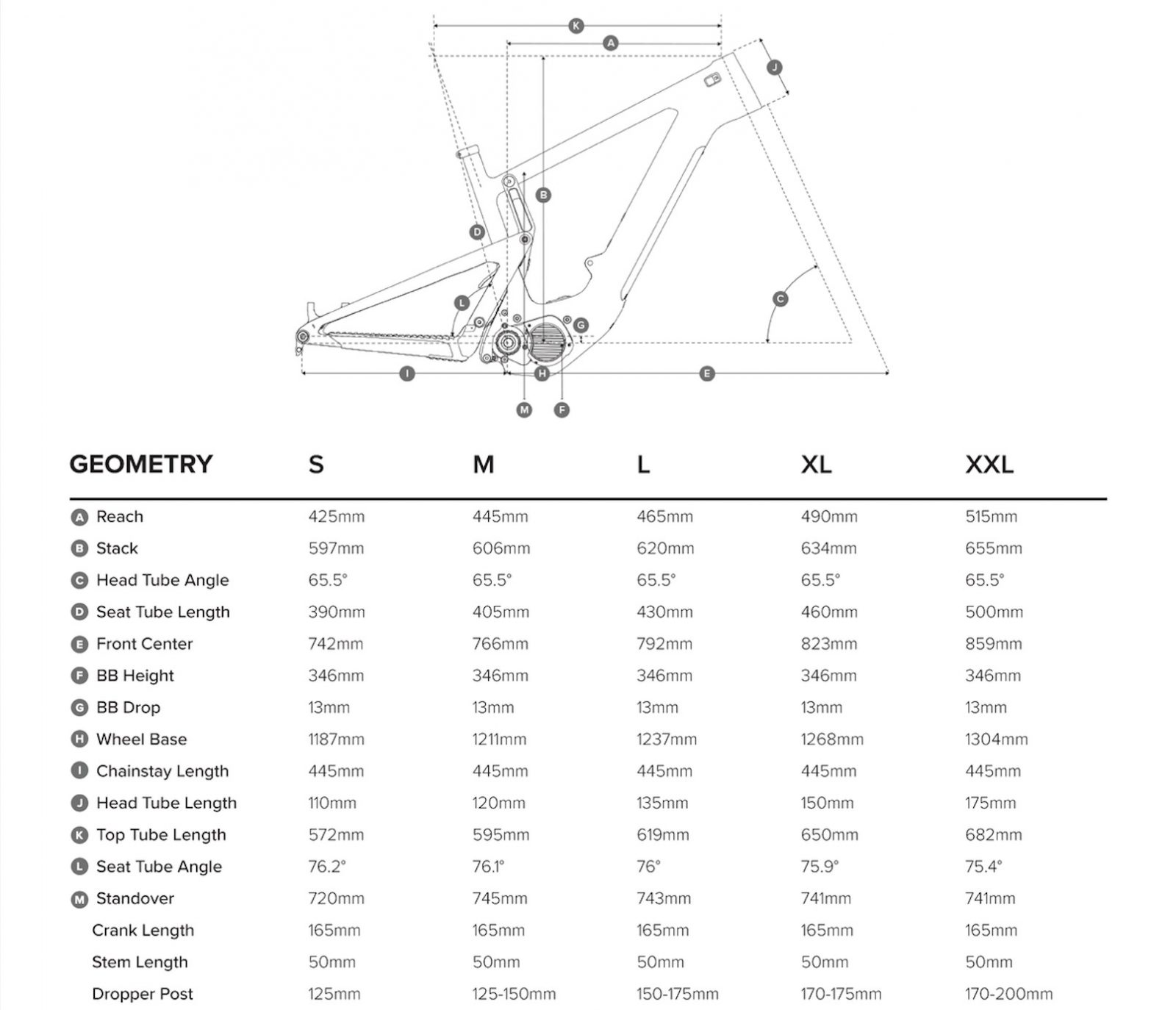 With the exception of the longer 445mm chainstays, just about all of the geometry numbers are the same as a current Bronson. Amply long reach, a relatively slack head angle and a fairly steep seat angle leave the bike well balanced all around. Speaking of the Bronson, the suspension travel is identical. It is also extremely similar as well in terms of kinematics…

To be completely honest, foolishly I sort of scoffed at the idea of Santa Cruz releasing their first e-bike with 27.5″ wheels instead of 29″. Being a bit late to the e-bike game, I thought it was a risky move. I walked that back pretty quickly after riding the bike though, and for more than a few reasons. Out of the gate, I was extremely impressed with the geometry and general temperament regarding the bike’s handling. Although I do think that most brands are soon going to stop putting any new developmental efforts into 27.5″ bikes, I do think that a well designed bike on that wheel size can, in some ways, handle better than the average 29″ bike. The Bronson is no exception – and so neither is the Heckler. 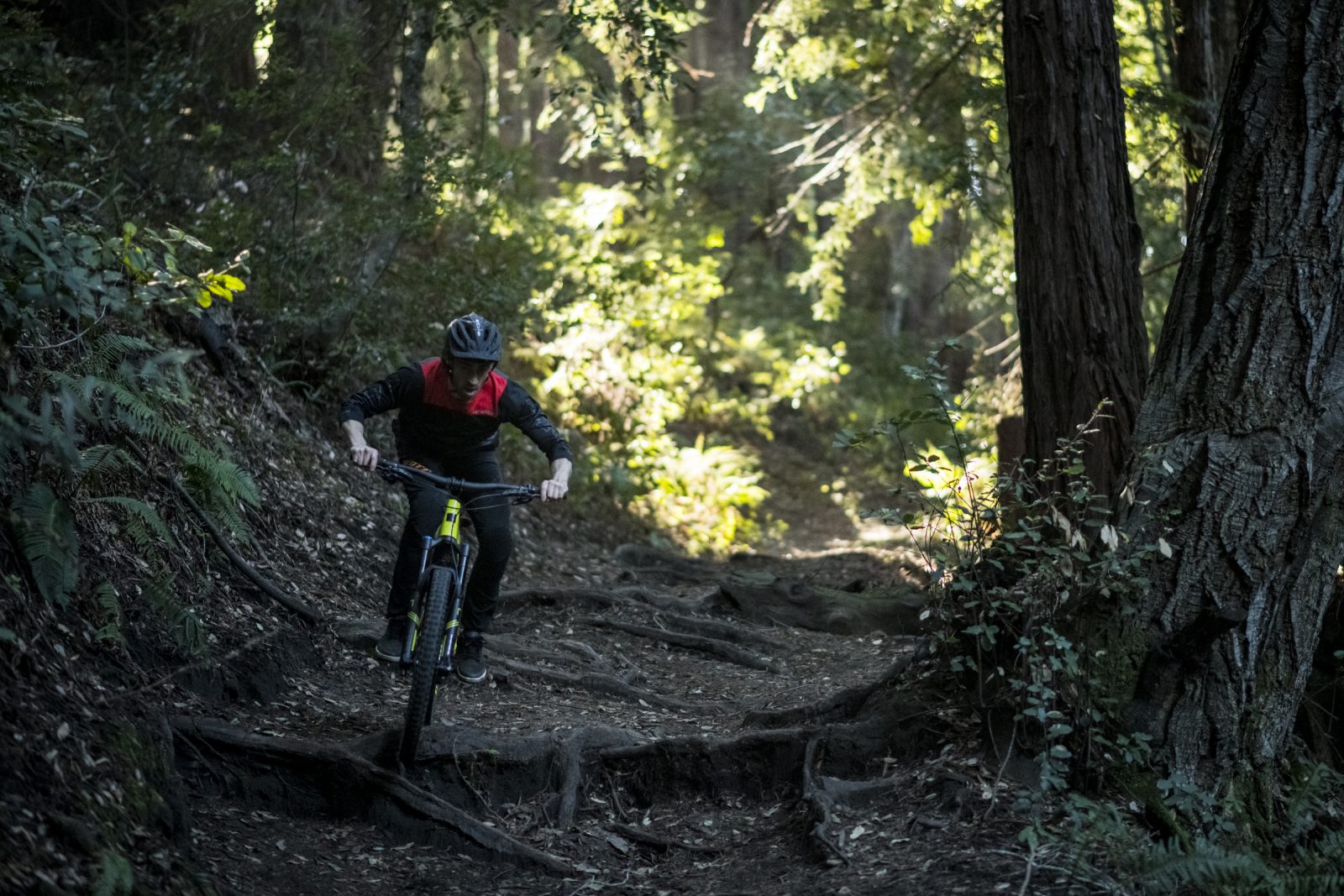 In my experience, Santa Cruz can be touch and go with rear suspension. For example, the MegaTower is a great bike, but many consider its rear suspension to be a little bit difficult to set up and get “just right” where it doesn’t hang up a bit. On the other hand, the Bronson is known for having an appetite to just gobble everything up that lays in its path. Once I get into some of the rougher sections of my ride and started hitting square edge roots and braking bumps, I was floored with how well the Heckler handled them. It was not simply impressive for an e-bike, but any bike for that matter. It’s worth adding that somehow it managed to eat up everything in sight, while still having a penchant for pop. It was shockingly easy to boost and jump, all while having an incredible sense of calm. So in summary, this is a bike that handles well, gobbles up bumps without wallowing, jumps and corners nicely and feels really stable. Not bad! Lastly on general mannerisms, while the motor itself was relatively quiet, what stood out more than anything was that the bike didn’t rattle or make a racket. In fact, it didn’t make a peep – it’s eerily quiet, so hats off to Santa Cruz for that. 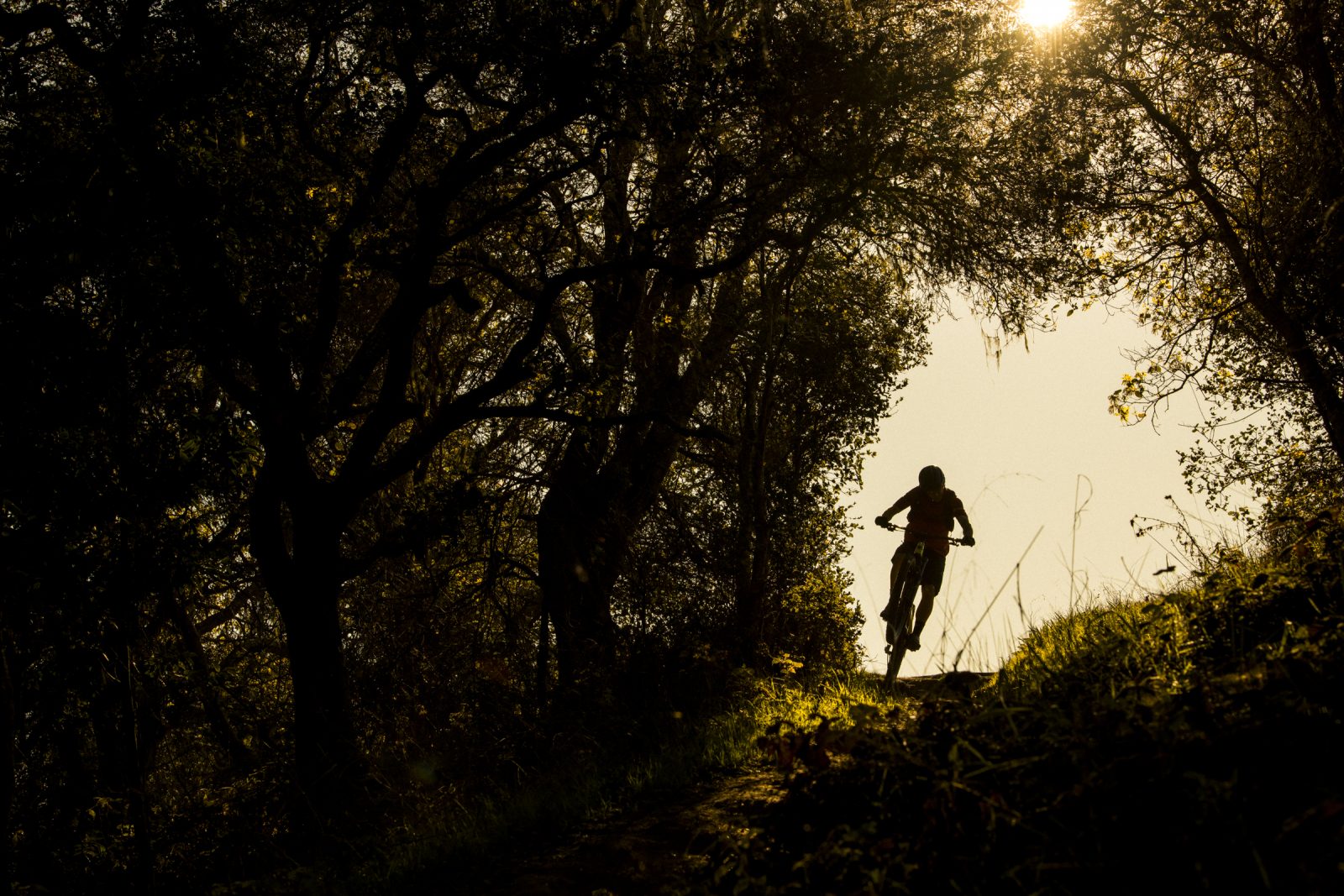 As far as the electronic side of things are concerned, Santa Cruz played it safe and for good reason. Part of their rationale for going with Shimano is because of the excellent, broadly available support for their motors. The motto at the Santa Cruz is “no missed rides”, so reliability and service are their number one priority. While there are bigger batteries than 504 Wh out there, I was impressed with the general layout and performance. The ergonomics were dialed and minimalist on the adjuster that handled changes between the 3 modes (eco, trail & boost). They had a good spread and the motor’s power transfer was very smooth regardless of which one I was pedaling in. The display was also discrete, simple and out of harms way. As far as the rest of the parts are concerned, the specs very much mirror Santa Cruz’ choices on fully human powered bikes. Things like the Eagle drivetrain, Code brakes, Fox 36 and Reserve rims on DT hubs are parts that need no introduction and have all gone well beyond proving themselves. As far as the spread is concerned, the 4 available spec levels all pack a good punch and are available from $7,399 to $12,599 USD. While those prices aren’t cheap by any means, Santa Cruz is neither a budget brand, nor are they an over the top boutique brand when it comes to pricing.

At the end of day, Santa Cruz has made an impressive debut into the e-bike world. I was initially skeptical of what they were bringing to the table, but was humbled after a solid ride. While there are no shortage of overused buzzwords to describe mountain bikes and their attributes, I’d prefer to avoid them in this summary. At the end of the day, this bike was just straight up fun. Yes there are bikes with more power and/or more travel out there. Let’s say you’re looking for an e-bike that’s simply a blast, but something like a Specialized Kenevo is just way too much bike and perhaps a Levo is just too conservative – well, this is exactly what you’re after. For an e-bike, it’s way too poppy and easy to get off the ground, but will surprise you with how well it eats everything up. The truly silent nature is a huge bonus, and while it is a bit pricey, the parts choice is really good within each tier.

[Video] Athertons Team Up with Continental for 2020