Netherlands based brand Instinctiv Cycles just launched a very unconventional looking new gearbox bike. Working around a Pinion gearbox, the bike is available with 27.5″, 29″ and mullet wheel sizing. Below you can find full details about the frame construction, brand history and approach as well as geometry, spec and suspension breakdowns… 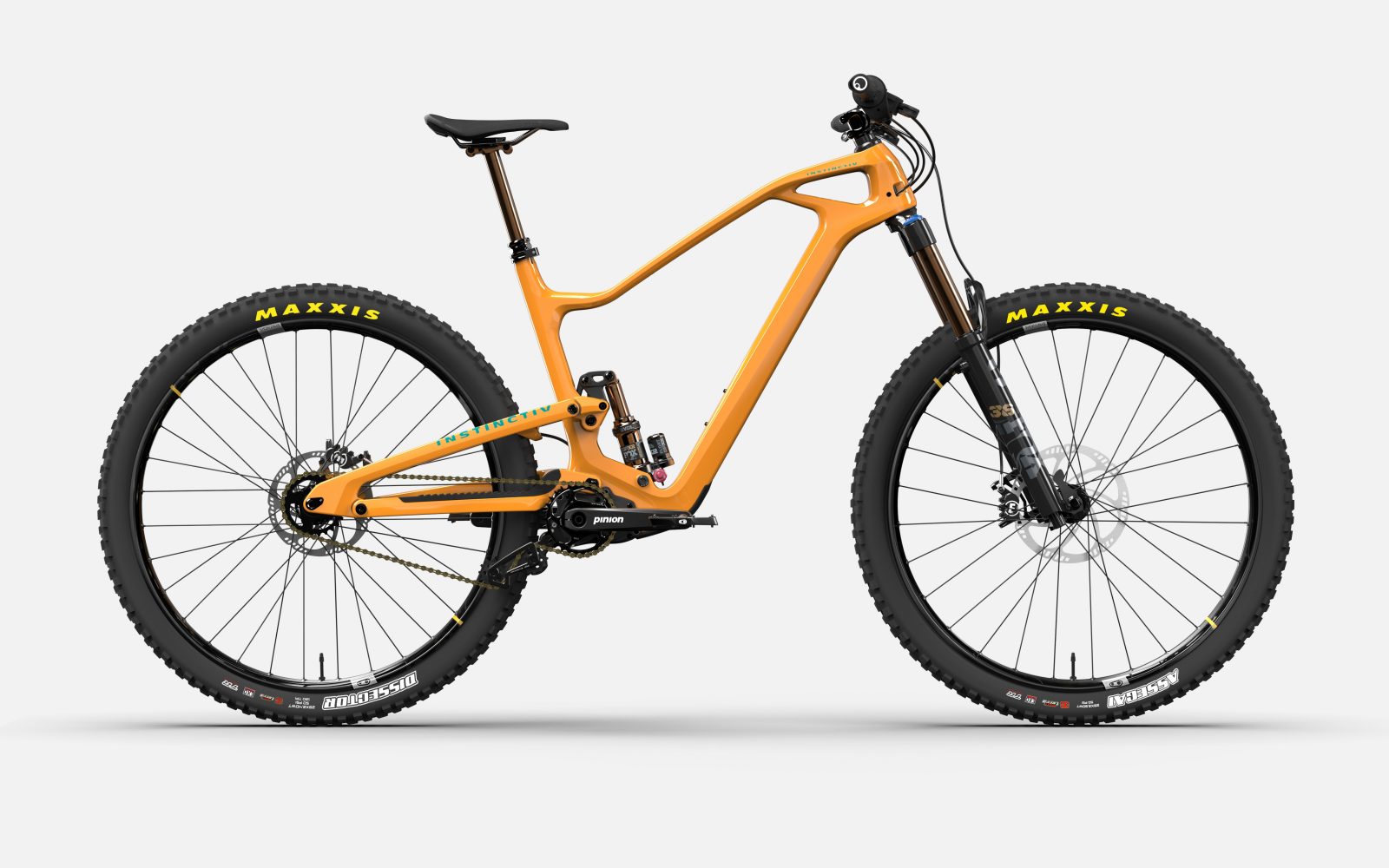 Drivetrain: Pinion C1.9XR with 568% range or C1.12 gearbox with 600% range, combined with the Pinion DS2 grip shifter or the optional Instinctiv trigger shifter 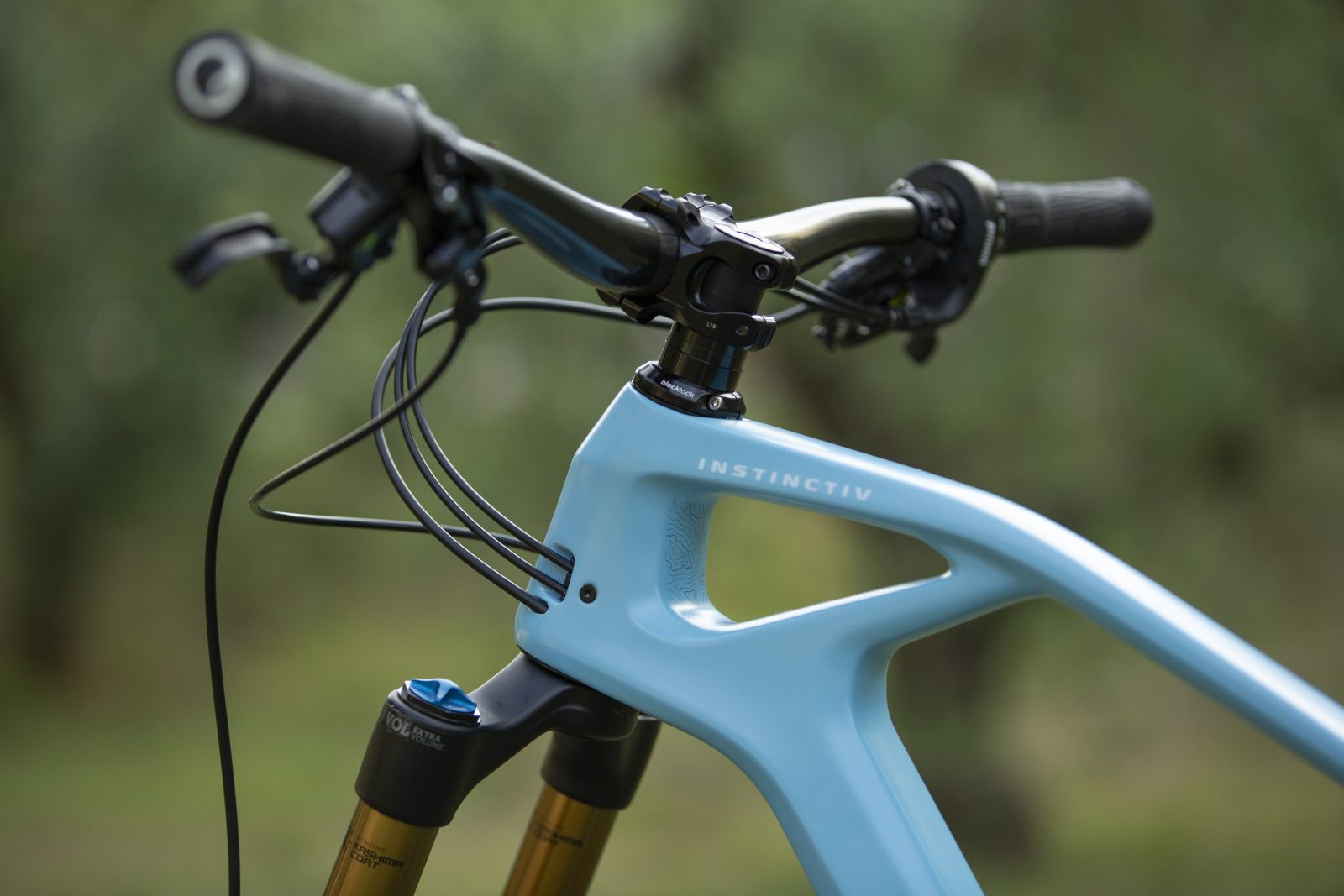 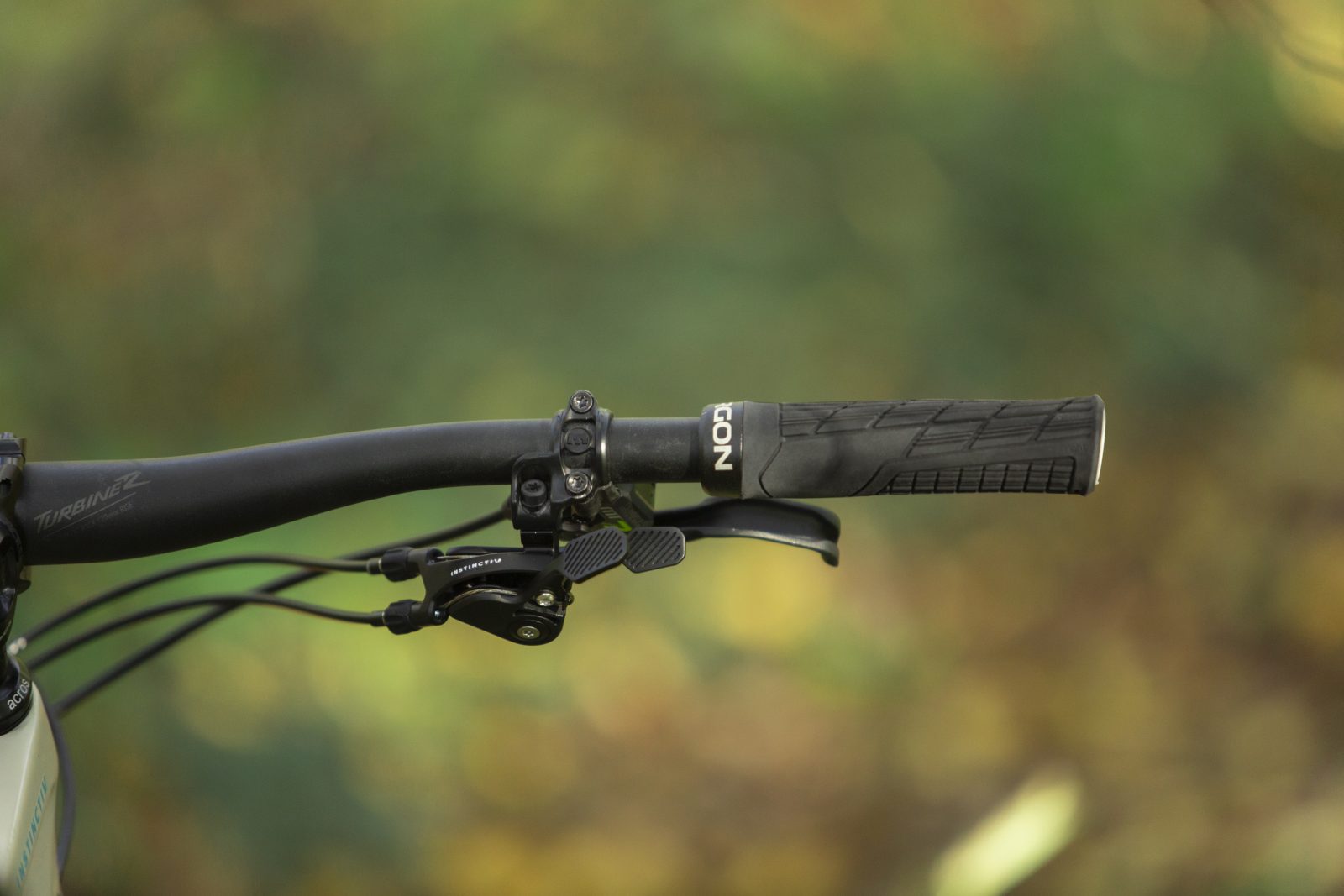 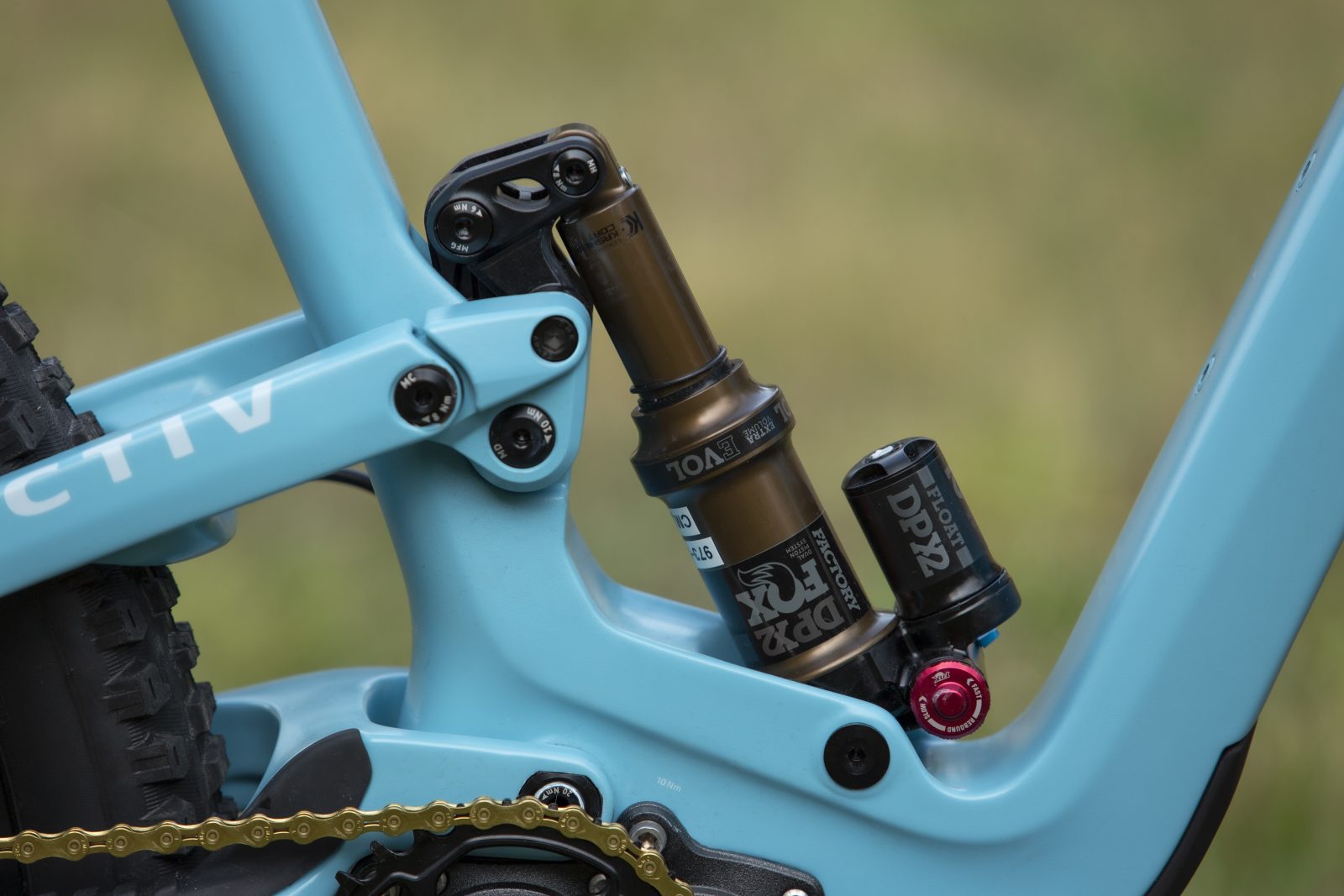 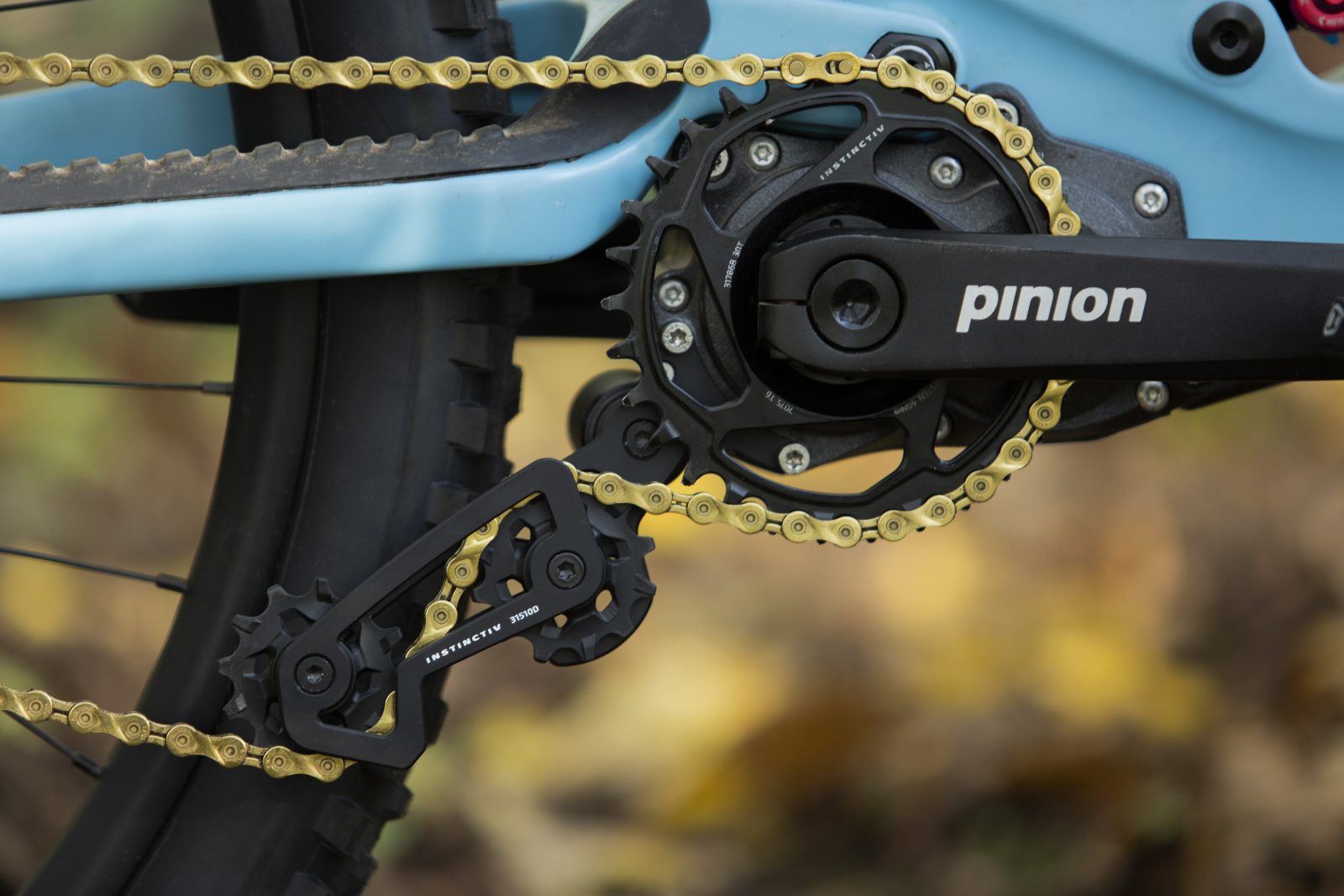 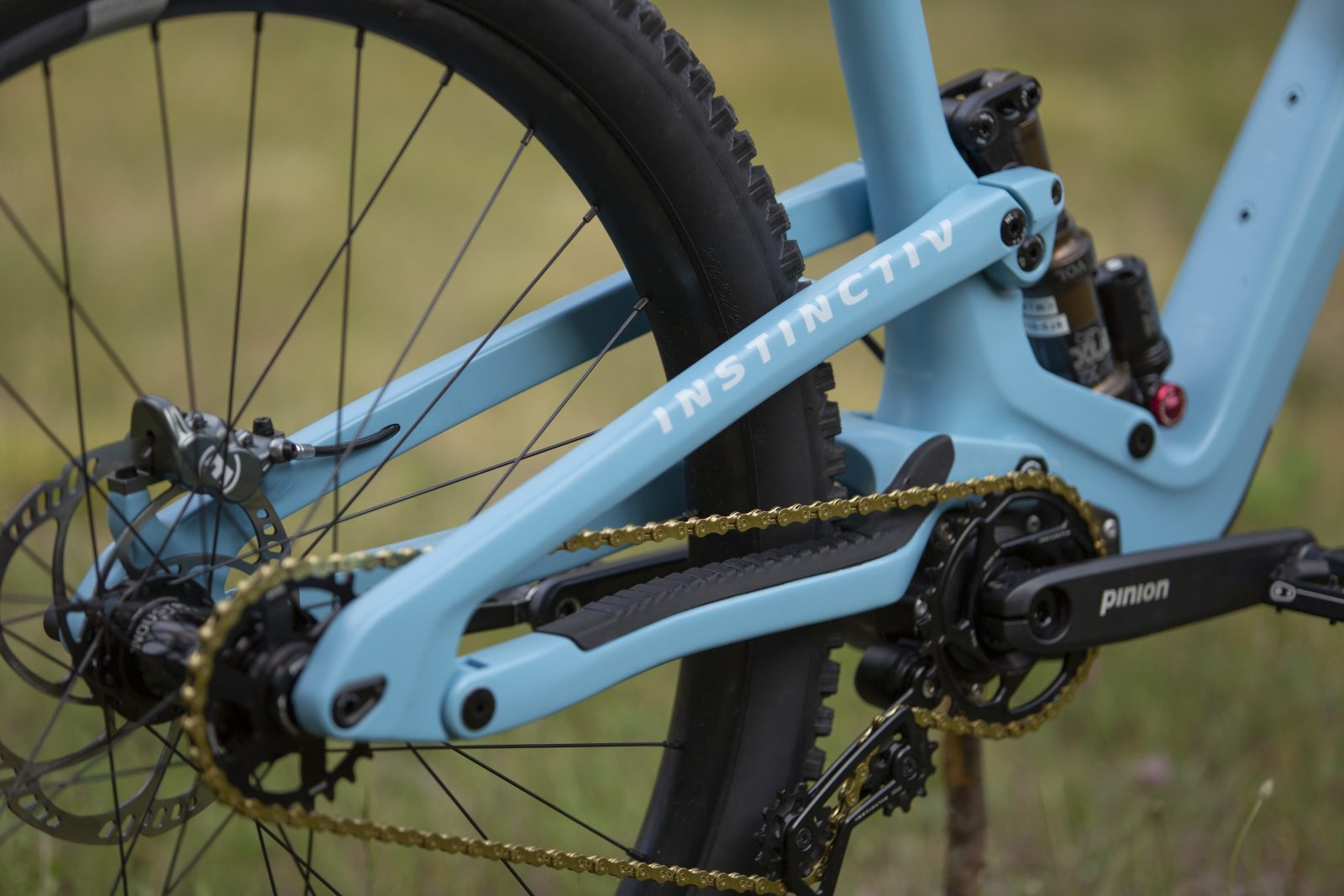 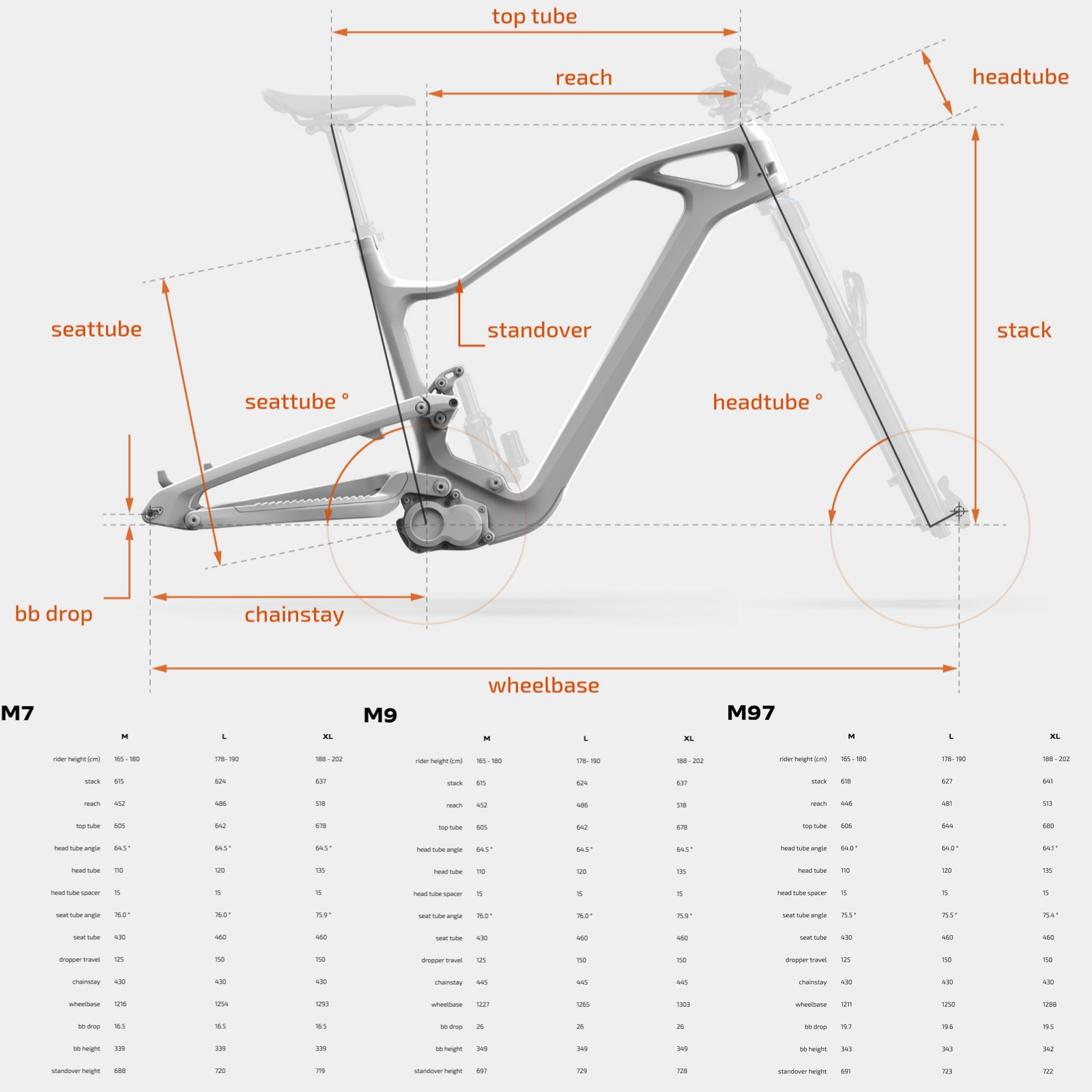 What is the inspiration behind Instinctiv?

For us mountain bikes bring together great elements: nature, freedom and technology. As owner of the company I’ve been riding since 1992 and in our team we are almost all riders. We have been riding together as a team, both in the Netherlands and in Slovenia and Croatia. Of course there are many great mountain bikes out there, I myself ride top bikes from Canyon, Santa Cruz and Zerode. So in a way there is no need for another brand. But Instinctiv gives us something that might be essential as well to being human: the deep desire to create, apart from being in nature and feeling free. We wanted to build a bike ourselves, mostly for the sake of creating something seriously good. Going into details, building a bike that we ourselves would love to ride. So, that means that we did not conduct market research. Of course we know very well what is for sale, we tested a lot of bikes. But mostly to know how bikes and components perform. We hope to sell small series of bikes of course, that will help us keep creating and improving.

History in the bike industry?

In the core we are a design and engineering team, we have been working for companies for many years to develop new innovative high-end products, many sports products. And we have been working closely with bike companies, but never developed full bikes. So, about 2.5 years ago I got the desire to create our own product, to showcase of what we are capable of doing as a team. To develop our own high-end bike, bringing every detail to a high degree of perfection. That was the start of Instinctiv. It started as a project but evolved into a company that designs, develops and assembles bikes. 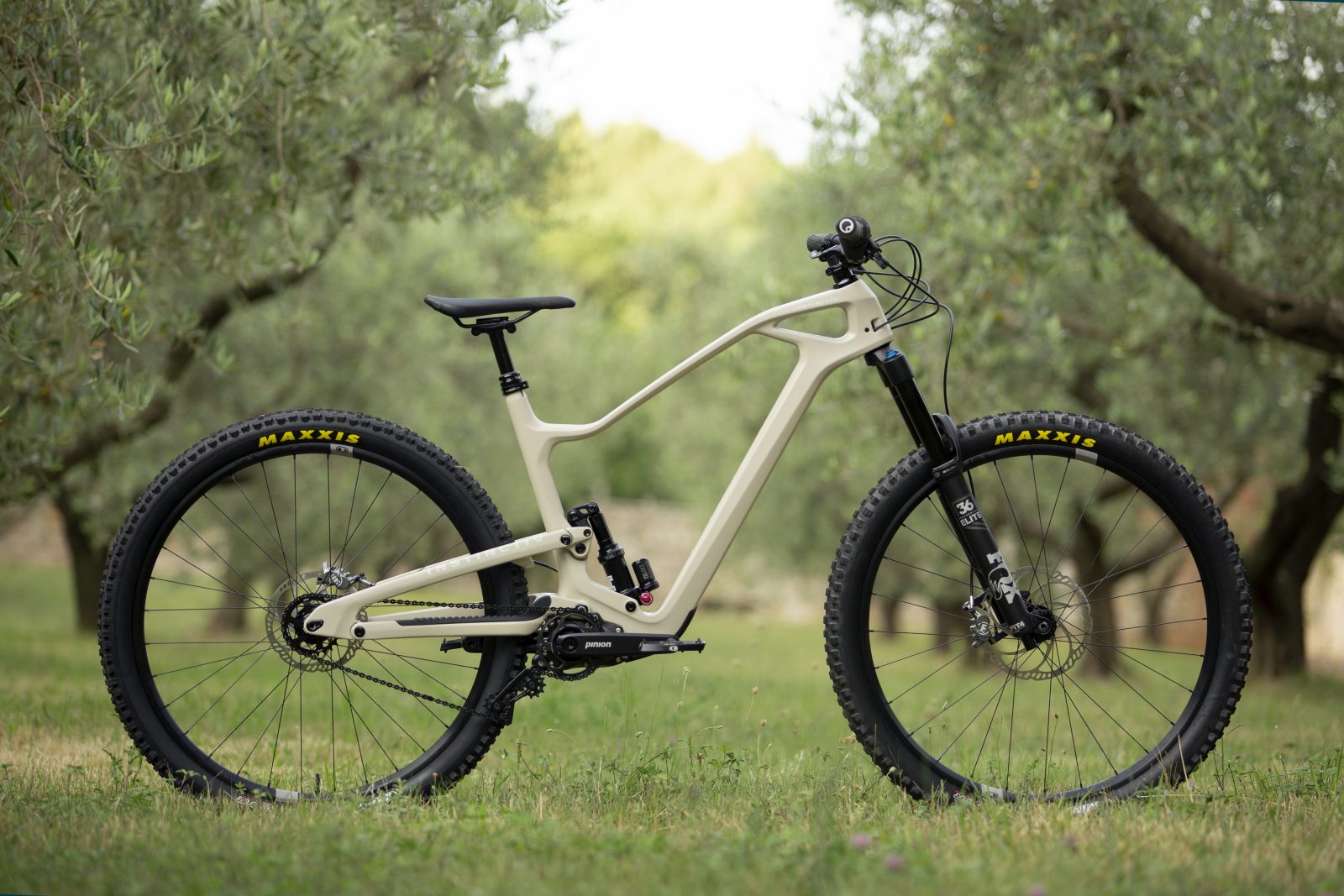 What was the reason behind the name change?

During the process we changed name indeed. With our first name Undomestic we had the intention to give a feeling of being non-domestic, like a wild cat, not domesticated, as in being in nature, having adventures. Native English speakers told us that they had a very different feel to the name, referring to non-domestic food, non-domestic flights, as in foreign. So we talked to more people and decided to listen and create a new name, which was a process of months on the background and a lot of sweat and tears. But we are happy with the new name, it’s better. The new name still has something of the basic idea, being in nature, slightly referring to big cats or wild animals, being free.

Croatia and the Netherlands?

Our HQ is in Amsterdam, that is where the full team is located most of the time. But testing we do in other countries, indeed a lot in Croatia and Slovenia. It’s a personal thing, I come in Croatia for many years, we have a spot there that became our performance centre. From that location we take the bikes and ride the rocky trails in different locations in the country. It is a great place for testing and photo shoots. It’s indeed rough, rocky and mostly good weather. What sort of rider is the ‘M’ platform for?

The M is build for the enduro and trail rider. We wanted to create a bike that is seriously good, that could perform well in the EWS. A bike with a lot of grip, a low center of gravity and a high-quality suspension system. But you do not need to be pro to ride this bike, it is a lot of fun on the trails, both going up and down.

The M7 and M97 share the same frame, the M9 has a different chain stay and seat stay. All frames come in 6 different colours and off course has each model its own set of decals.

Where are Instinctiv frames made?

The frames are made by a company in Taiwan that also produces for other small scale high-quality mountain bike brands. The frames come in parts and unpainted to us in the Netherlands, where we check the frame parts. Then we send the parts to a specialised bike coating firm in the north of the Netherlands, where they are checked again, sanded by hand and provided with a 3-layer high-quality coating and decals. After that the frame parts come back to us and we do the frame assembly and the bike assembly in-house in Amsterdam. That way we know that every bike that leaves our building is built to perfection. Why the gearbox on the M?

The idea of a bike that is maximum ‘confidence inspiring’ has always been leading in the development of the M-series. Hence our choice to work with a Pinon gearbox, so that we could remove weight from the rear wheel and place it centrally and low in the front triangle. That gives a seriously good response in the rear wheel. And shifting is super direct and fast with a gearbox. We believe that the extra weight of about 600 – 900 grams outweighs the better riding on a bike that is build for heavy trail and enduro use.

What about the compact suspension?

During the development we have been searching for a suspension solution that is very compact and positioned low in the frame. Basically our setup is a Horst suspension. But we wanted the shock to be as central and low in the frame as possible, in line with our ‘confidence inspiring’ philosophy to create a center of gravity that is central and low. This gives the bike stability at high speed, a lot of grip and a predictable character in all conditions. To do that, we had to design a system of rockers and links that drives the shock in a progressive and compact way. The final platform design is patented and made it possible for us to optimise the leverage ratio independent of other kinematic factors.

Which drivetrain components did you design in house?

We spent a lot of time on geometry, testing many other bikes, kinematics, simulations, developing and testing the platform and later extensively testing our first prototypes. We did tests in Croatia to see how the frames perform in rough, rocky terrain and in the Netherlands to test the drivetrain in the mud and rain. During testing we found that we should create a chain tensioner that is reacting faster than the standard version. With a different spring system, larger jockey wheels, high quality bearings, and a closed construction. And we had a wish to offer a trigger shifter as well that would work with Pinion. The shifting module is from Cinq / Tout Terrain, a quality German manufacturer of innovative products, in combination with our ergonomic trigger, that is fully tuned to mtb riding and very similar to what you are used to. It took us about four rounds of development and prototyping to get to the final versions of the shifter and tensioner, and we believe they are both very good now. For the pro’s who want to race, we have developed an additional chain guide. 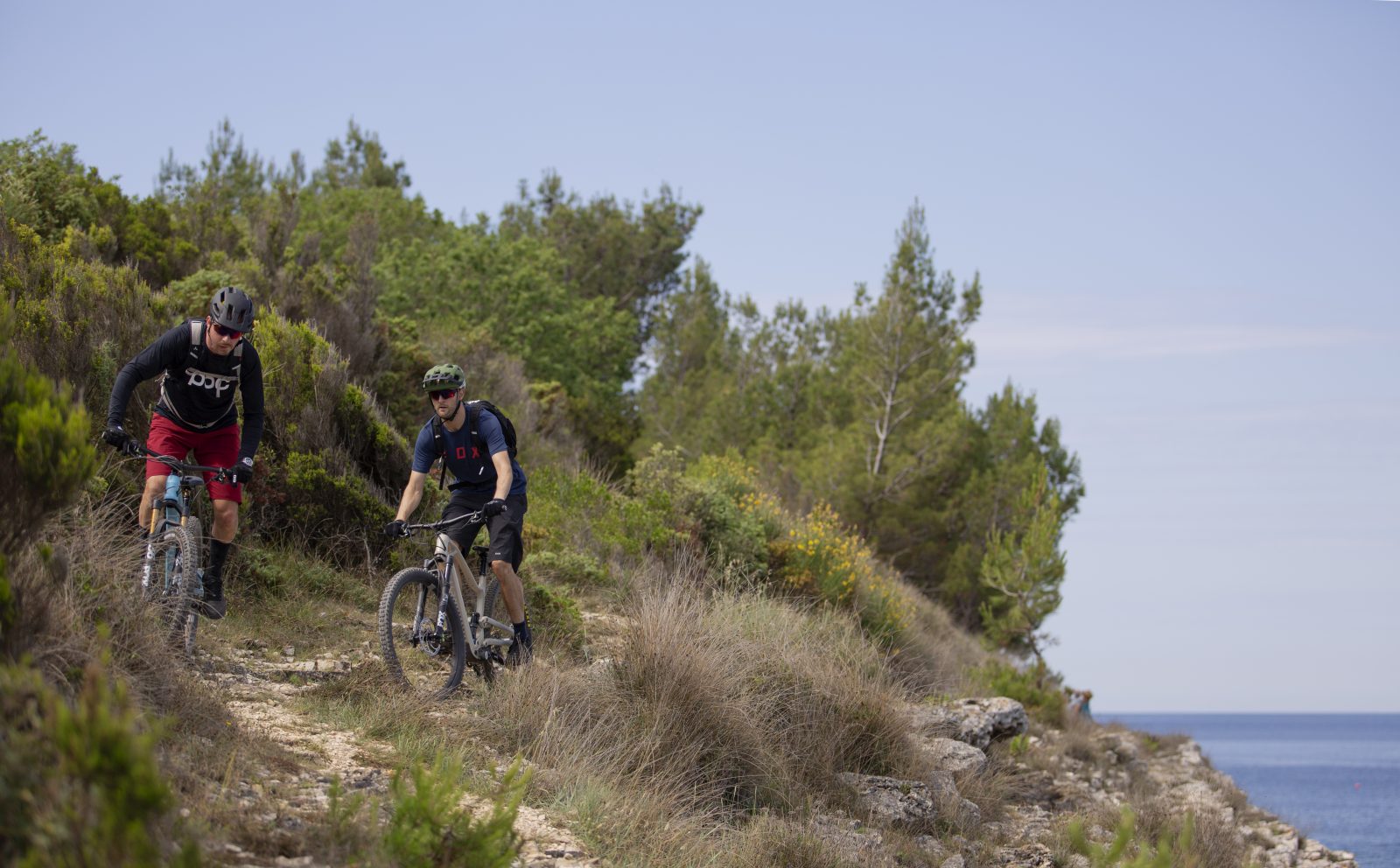 What makes Instinctiv bikes stand out from the competition?

Our bikes are a mix of nature inspired design and a high level of perfection in the details. Partly made in Europe, all by hand, many things are done in house. In terms of performance it all come together in lots of traction, low center of mass, inspiring confidence at high speeds. The gearbox is an ingredient to reach just that. Feature wise I think the trigger shifter is interesting and also that we use 7% recycled high quality automotive carbon.

What has been the hardest part till now?

Probably getting all the details right. That takes perseverance, dedication and patience. Our manufacturer must have gone crazy from us and most likely other suppliers as well. I wish things would have gone faster, but it takes what it takes. We are now ready to start selling, and it is just before Christmas. Maybe not the best time to introduce a new bike brand, but it is what it is. We are now entering unknown ground for our team. Development is what we do for many years, but really entering the market with a product is new. We choose to run sales directly in the EU through our website, so that we can have personal contact with our buyers. And we found a great partner in Switzerland who bought a set of demo bikes and will set up demonstrations, service and sales locally.

What are you most proud of so far?

The core of what we have been aiming for is something that we managed to do. We created a bike ourselves, from scratch. A good bike, that is valued by the enduro riders from Switzerland, that became our partners. The feeling of riding your own bike for the first time is really great. We hope that sales will take off, that will give us the opportunity to create more bikes, because we have many more idea’s and dreams. But even if sales will appear not be what is needed to continue, then we had the honour to design and ride our own bikes.

What does the future hold for Instinctiv?

We have sold the first small batch of bikes and are now scaling up to run a next batch of 50 bikes. We take in pre-orders right now and there are still free production slots, so people who want to be the first to ride the M can still place their pre-order. We do not want to grow too fast, but grow slowly and steady, so that we can keep logistics, quality and manufacturing at a high level of quality. We are fully self-funded, so no banks, no investors or external parties, we are free to do what we want in a way. At the same time we have plans for more models, and already started working on that.