About a week ago, RockShox announced that along with at least 5 other suspension manufacturers, they will begin offering metric shock sizing.  There are a number of reasons for this sea change.  As the Super Deluxe and Deluxe are announced today, reading on about their details will help you understand why this sea change is being brought about.  There are a host of highly beneficial improvements to shock design and quality, that will inherently affect frame design, ride quality and hopefully, eventually lower costs.  Details below. 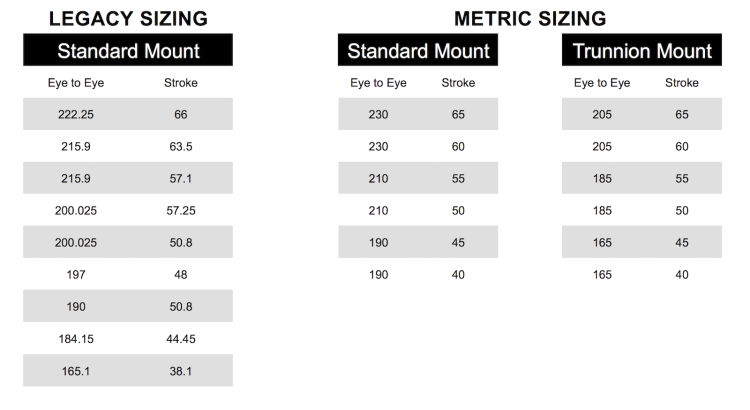 The charts shown above showcase how metric sizing will simplify things.

It all comes down to less oddball sizes, less SKU’s = lower costs to consumers.  According to RockShox, there are currently around 90 different shock hardware options.  That is way too many.  But don’t fret.  RockShox is “committed to supporting its imperial shock sizes as long as market demand is relevant.”

There are two new shock bodies and each of them are tiered in classic RockShox fashion.

Aside from Metric sizing, there is a great deal of new technology that has gone into these units. Considering the massive overhaul that these shocks see from a design point, it makes sense for RockShox to push for unifying the industry with a standard set of shock sizes & dimensions at this point.

The new shock body allows for a great deal of added overlap with both the air can and the bushings on the shaft and the piston.  This increases stiffness and resistance to friction under load.  In turn that offers better traction, responsiveness and durability.  As many shocks are often an integral part of a frame’s rigidity, this is very important.

With the addition of trunnion style mounting, frame designers can take advantage of new dimensions which offer benefits such as lower standover heights thanks to shorter eye to eye length shocks relative to stroke length.

The option to utilize bearing mount eyelets will increase stiffness while decreasing rotational friction. They will be available for both upper and lower eyelets.

Some technologies carry over from the  Monarch shock series.  “Counter Measure” – a spring that works to oppose the effect of the IFP pressure, effectively lowering the initial breakaway force will remain in these units.  Most importantly, they will all utilise the technology that was brought to us with Debonair.  More below…

The Debonair can was big benefit to the Monarch and Monarch plus that the new units are replacing.  This high volume air can allowed for volume reducers(Bottomless Rings in SRAM speak) to be utilized to fine to the progression curve.  All of the new units take advantage of this technology in a very easy to use way.

Overall, this seems like a genuine attempt at streamlining and simplifying a very convoluted shock market. Consumers are constantly moaning and groaning about new standards, but this shouldn’t be viewed as such.  Rather, it’s a proposed logical set of standards to limit the addition of new standards in the future and open up more options for full suspension frame technology and design, all the while improving performance and lowering costs passed on to consumers.