This weekend, the fourth round of the iXS European Downhill Cups led the riders to Les Deux Alpes in France. Gee Atherton and Miriam Nicole dominated an exciting race and succeeded over their strong competitors. 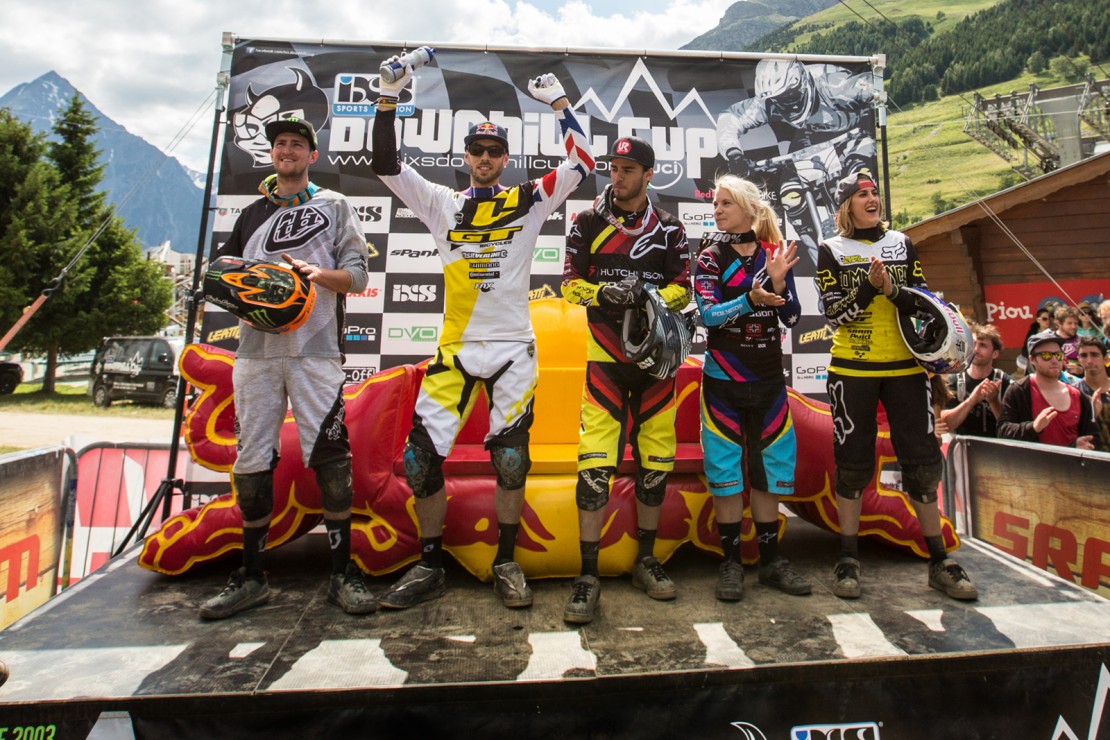 The iXS European Downhill Cup visited the European Crankworx Festival in Les Deux Alpes (France) for its fourth round: the Polygon Air DH. Among the starters were the best riders of the world’s downhill elite. Of course, a festival is always a huge magnet for both riders and visitors, but the enormously fast track definitely also played an important role in season 2014. The riders started at 2300 meters above sea level and rode down an extremely fast 2700-meter track with a 700-meter difference in altitude. Exactly this height together with rather unfortunate weather conditions and heavy winds made it impossible to use the chairlift on Friday, so that the first training sessions had to be cancelled. But it never gets boring at the Crankworx Festival – the riders took their unexpected free time to pay a visit to the GT Dual Speed & Style.

On Saturday, the weather was at its best again and together with the extended training sessions it definitely made up for the previous day. The track was, however, still wet, but got dryer and dryer throughout the day. In the afternoon, the participants of the EDC checked out their competitors among 250 riders from 27 nations and showed their ambitions for Sunday’s race in the Seeding Run. Gee Atherton (GBR – GT Factory Racing) set the day’s fastest time with 3:36.50 minutes, followed by Andrew Neethling (RSA – Giant Factory Team) and Marcelo Gutierrez Villegas (COL – Giant Factory Team). Fastest woman of the day was Miriam Nicole (FRA – Riding Addiction) with 4:09.72 minutes. As you can see, the bar was set quite high for Sunday!

On Sunday, summer was finally back with sunshine and warm temperatures – the only unnerving thing that still stayed around was the wind, which posed some problems to the riders. In the Masters category, Kristoff Lenssens (BEL – Kona Barracuda), winner of the seeding run with a huge 14-second lead, ignored the wind and again set the best time of his category with 4:0198 minutes. The leader of the overall standings Rostislav Stencel (CZE – Bikeplac Racing Team) ended up in second place, while Frank Hedwig (GER – RAD-ART) finished in third.

The U17 was led by Remy Morton (AUS – NS Dynamics) who went 21(!) seconds faster than his strongest competitor. Unfortunately, he will not be able to take part in all the races of the series, so we have to wait and see how he will do in the standings, since this might be a name that we should keep in mind. Federico Monzoni (ITA – Smile Bike) and Bennett Newkirk (USA – Team Project) completed the podium in places two and three.

In the Elite Women category the seeding run results spoke for themselves : the only riders who came close to Miriam Nicole’s best time were Tracey Hannah (AUS – Hutchinson UR) and Emilie Siegenthaler (SUI – Gstaad-Scott). Unfortunately, Siegenthaler was injured during her training and all eyes were on Hannah and Nicole in the final run. The first favorite was Morgane Charre (FRA – Evil Vengeance Tour), who went 5 seconds faster than in her seeding, but did not reach the best time. Tahnée Seagrave (FRA – FMD Racing) soon took over the lead, before Hannah and Nicole came down the hill. Tracey Hannah crossed the finish line with a time of 4:09.31 minutes and split seconds faster than Saturday’s best time by Nicole. In the meantime, Miriam Nicole had some serious problems on the track due to the wind and even fell, but she put up a real fight and took the first place with an incredible time of 4:06.60 minutes. In the end, Miriam Nicole dominated the Elite Women category, followed by Tracey Hannah and Tahnée Seagrave. Morgane Charre finished in fourth place, followed by Casey Brown (CAN – Bergamont Hayes World Team) in fifth.

The standard of the Elite Men category was extremely high, this weekend. Before the race entered the Top 10 riders, Florent Payet (FRA – Evil Vengeance Tour) had the Red Bull Hot Seat with 3:40.17 minutes, followed by Marc Beaumont (GBR – GT Factory Racing) and Remi Thirion (FRA – Commencal Riding Addiction) – but this was about to change. Thibaut Ruffin (FRA – Commencal Riding Addiction) finished faster than Payet, but was immediately edged out by Brendan Fairclough (GBR – Gstaad-Scott), who did not even have the time to sit down in the Red Bull Hot Seat, when Guillaume Cauvin (FRA – Hutchinson UR) had already taken over. Nick Beer (SUI – Devinci Factory Team) and Marcelo Gutierrez Villegas were not able to set a faster time, so that the final competition was between Cauvin in the Hot Seat and Andrew Neethling and Gee Atherton still on track. Neethling had some problems on the course and finished in ninth place in the end. Last man on track was Gee Atherton and he had already proven his ambitions and skills in the seeding run. But would that be enough? It was extremely nerve-racking, but in the end he finished in first place with the weekend’s best time of 3:35.62 minutes – more than 2 seconds faster than Cauvin, who ended up in second place. Brendan Fairclough completed the podium, followed by Nick Beer in fourth and Thibaut Ruffin in fifth.

For the first time, a race of the iXS Series has been broadcasted live at redbull.com/bike. This live coverage is a huge improvement for the series and hopefully will be continued in the future! After three races in Schladming, Val di Sole and Les Deux Alpes, which followed immediately after one another, the riders are granted one week’s time to relax, before the series continues with its fifth round in Spicak (Czech Republic). See you there! For more information, visit www.ixsdownhillcup.com

To take a look at the wind blown track with Gee Atherton and Brendan Fairclough, check out the video below.