Vienna (AUT), April 12th 2015 – Nicholi Rogatkin becomes the first ever rider to win VIENNA AIR KING and the Panasonic Best Trick Competition. Thomas Genon joins him on the podium for the second time this season and pre-qualifier, Max Fredriksson proves his worth on the dirt to land in 3rd. Nicholi’s glory weekend began with an awesome win at the best trick jam session thanks to a massive backflip-360. 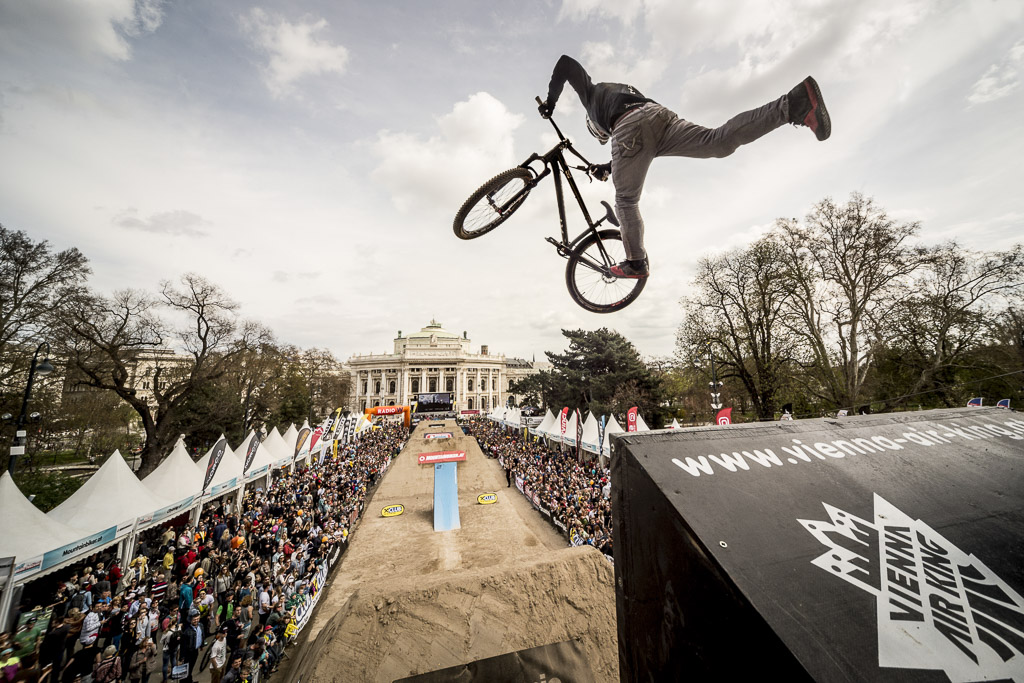 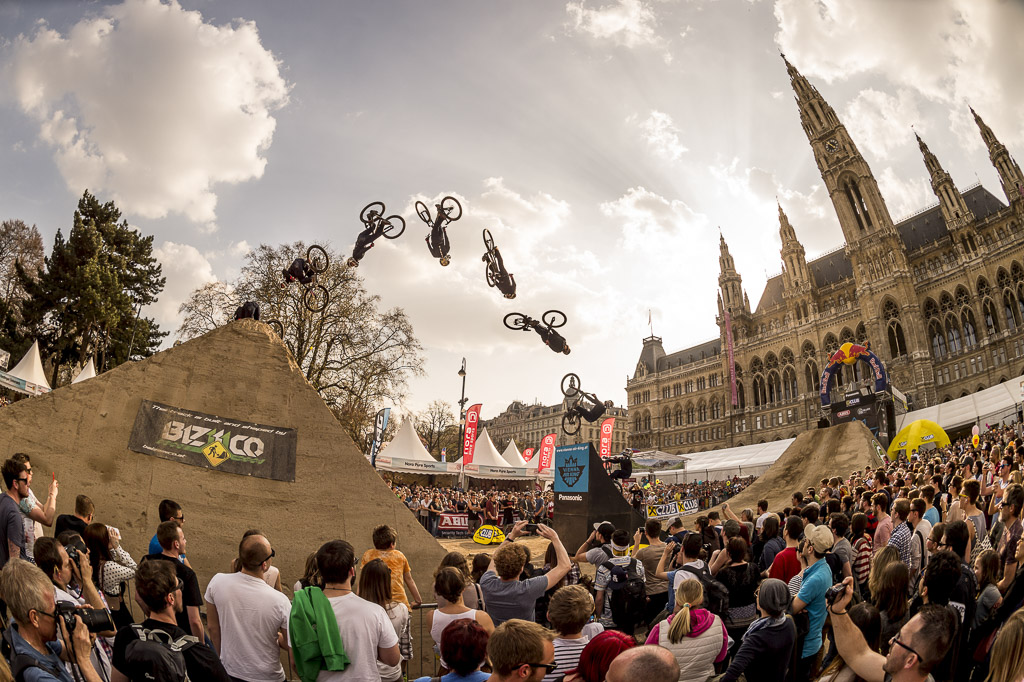 That’s a wrap! The 10th edition of the VIENNA AIR KING is done and dusted. A weekend in the sun at Vienna’s Rathausplatz was topped off by the awesome dirt jump contest. Crazy airtime, up to 9 meters high, gave the world’s best athletes enough time to throw down their gnarliest tricks. The story began on Friday with the pre-qualifying. From 40 riders, 14 proceeded into the qualifying to join the remaining 16 set athletes. One of these 14 was 19 year-old Max Fredriksson from Sweden… 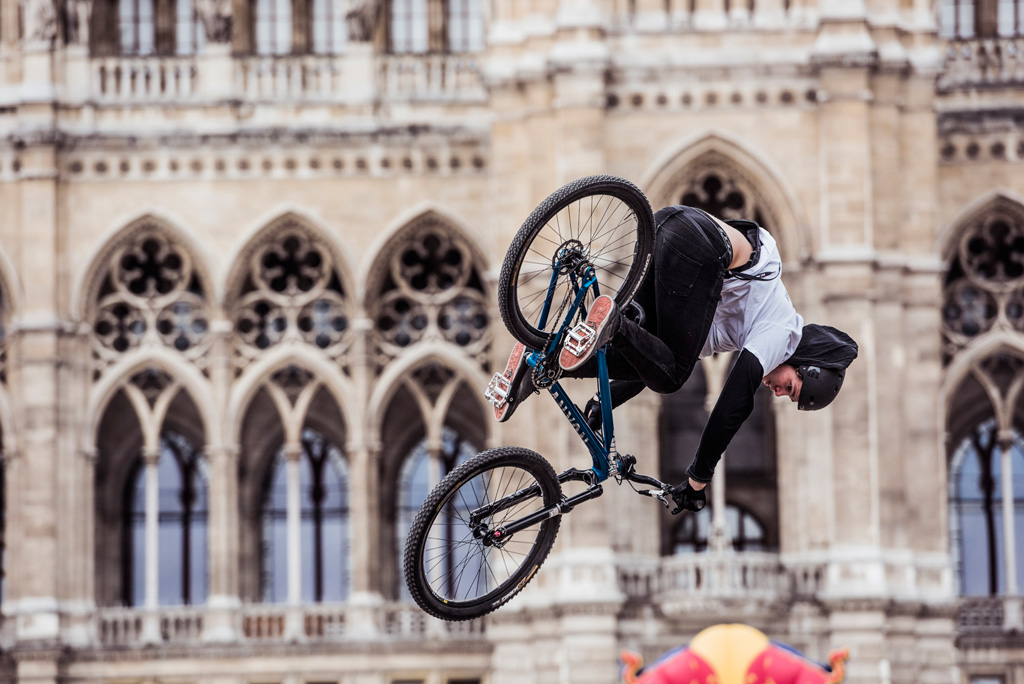 The results were mixed, with big names further down the ranks and younger tricksters rising to the top. Heading to the finals, the podium was anyone’s game. For crowd favorites like Szymon Godziek and Antoine Bizet it was a case of all or nothing. In the end, the gamble didn’t pay off but they sure had fun trying. Other top riders like four-time champion Sam Pilgrim, Anton Thelander, Peter Henke and Tomas Lemoine struggled to stick their desired runs together from start to finish. 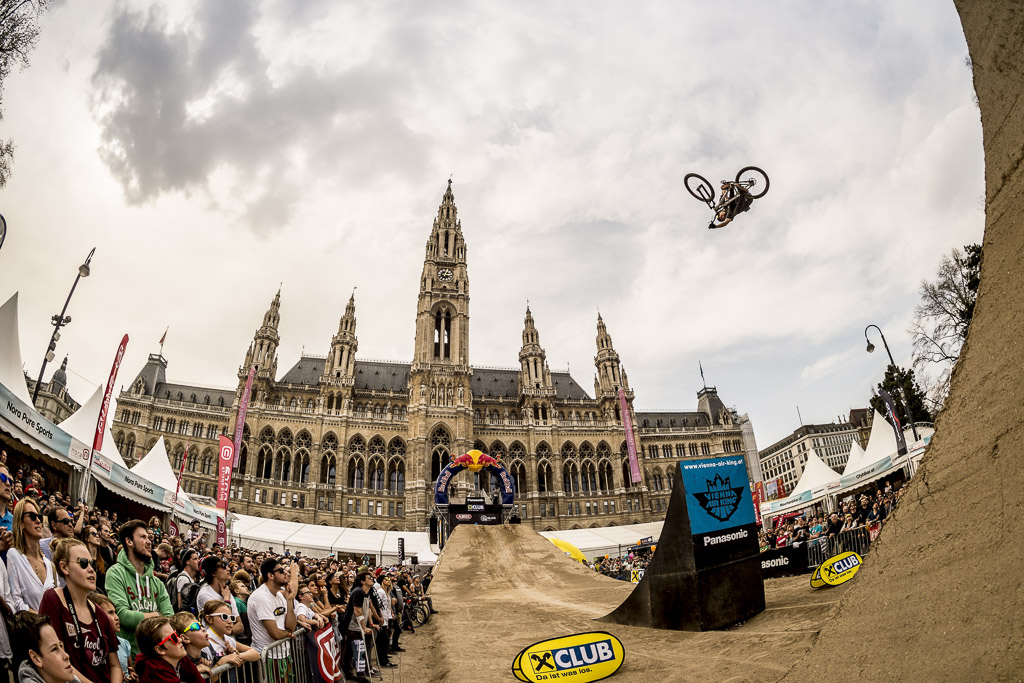 On Saturday, the earth trembled as jaws hit the ground during the Panasonic Best Trick Competition. A crowd, tens of thousands strong, gathered on Vienna’s Rathausplatz to witness the biggest and craziest tricks. Nicholi ruled the hour-long jam session with his huge backflip-360. Despite his victory in 2013, the “Cherrybomb” Russian, Pavel Alekhin could only seal 2nd place with his flipwhip barspin. He did get the crowd pumped with his incredible showmanship. The Frenchman, Antoine Bizet was nailing double backflips one after the other, looking to add that tuck nohander – but something just didn’t feel right. His solid performance awarded him third spot on the Panasonic Best Trick podium. Also worth mentioning was Szymon Godziek’s backflip double-barspin suicide, Tomas Zejda’s 360 tailwhip from the step down which the fans last saw in 2008 by American Paul Bas. A surprising addition to the jam session was Thomas Genon’s bikeflip.
Max Fredriksson is the first pre-qualifier to land on the podium (3rd, 85.66pts) at Vienna Air King. His run in the Sunday’s finals was a technical feast including a barspin-to-barspin-back from the step down, backflip barspin on the 9-meter hit, double whip and a triple truckdriver to finish. How was the Belgian Thomas Genon going to top that? Well, it began with a truckdriver from the step down, then a backflip barspin to tuck no hand and a smooth oppo 360 one-foot tabletop and ended with a wicked corked 720. Thomas Genon finished in 2nd with 88.33pts. Now all eyes were on the American athlete, who is taking the FMB World Tour by storm. Nicholi Rogatkin’s winning run scored 91.33pts and featured a tailwhip, backflip-360 at the big set, double tailwhip and his signature cashroll. An unbeatable trick throwdown, which awarded him the win.
Here are the final results: 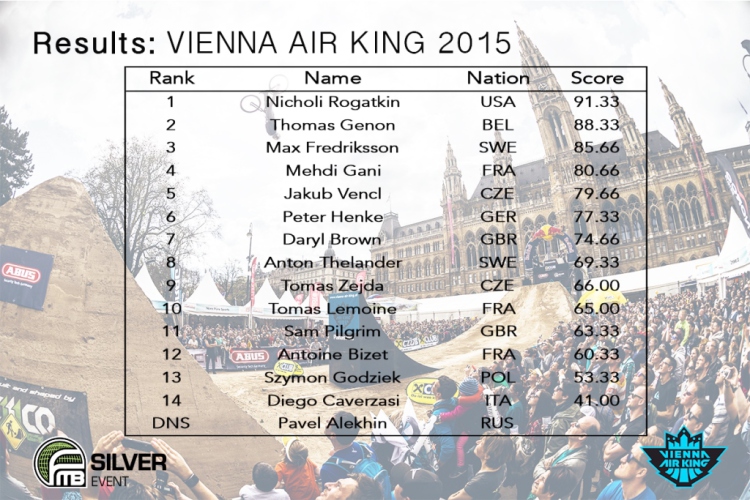 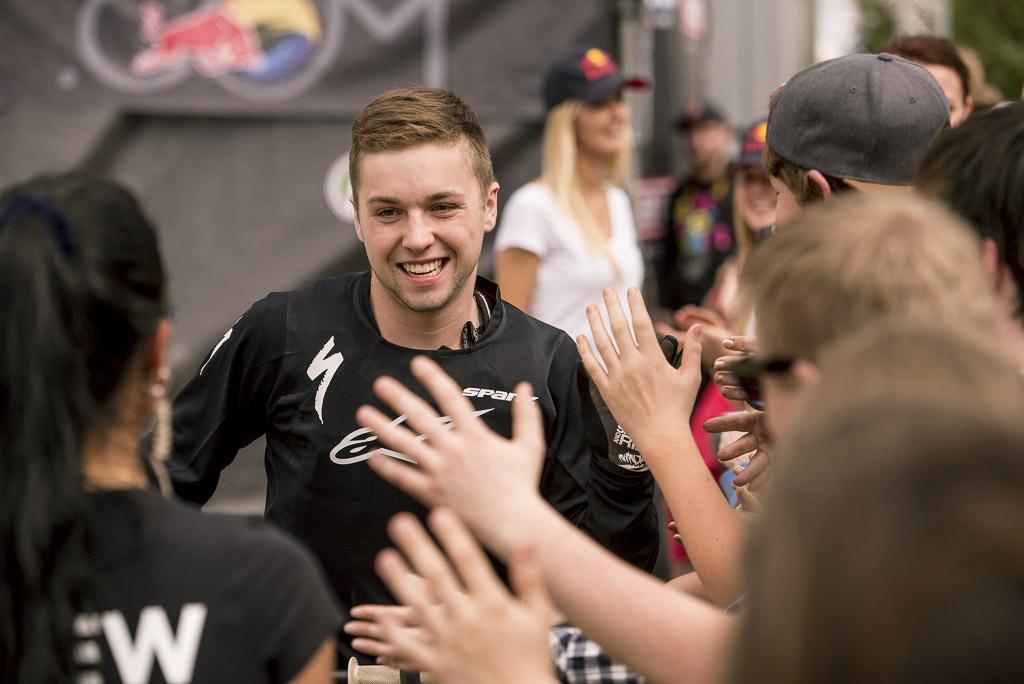 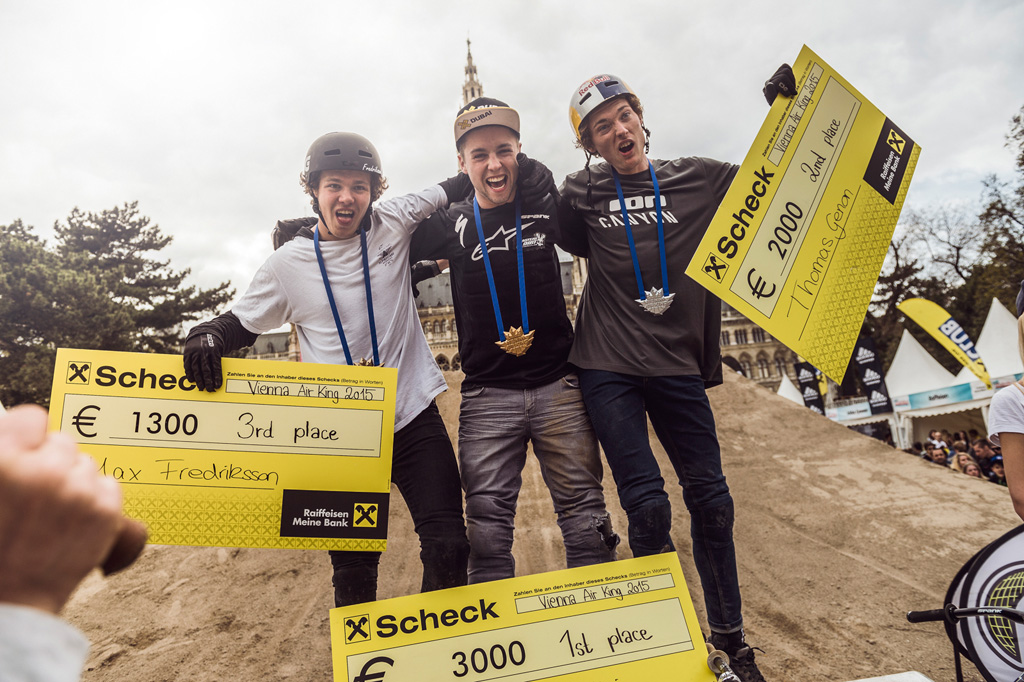 [Photos and video] Lourdes Downhill World Cup Results and Round Up