Pivot Cycles breathes fresh blood into the Firebird by equipping it with 29-inch wheels. The bike park bike of the Arizona brand becomes even more aggressive with new more modern geometry, and different details designed specifically for a wider range of use. Pivot has in fact created the Firebird 29 with the aim of satisfying both Enduro racers and bike park enthusiasts, with an aggressive yet at the same time manageable downhill product that’s capable of climbing without limitation. We have just received one to test, so we will soon be able to provide you with our riding impressions after a complete test. 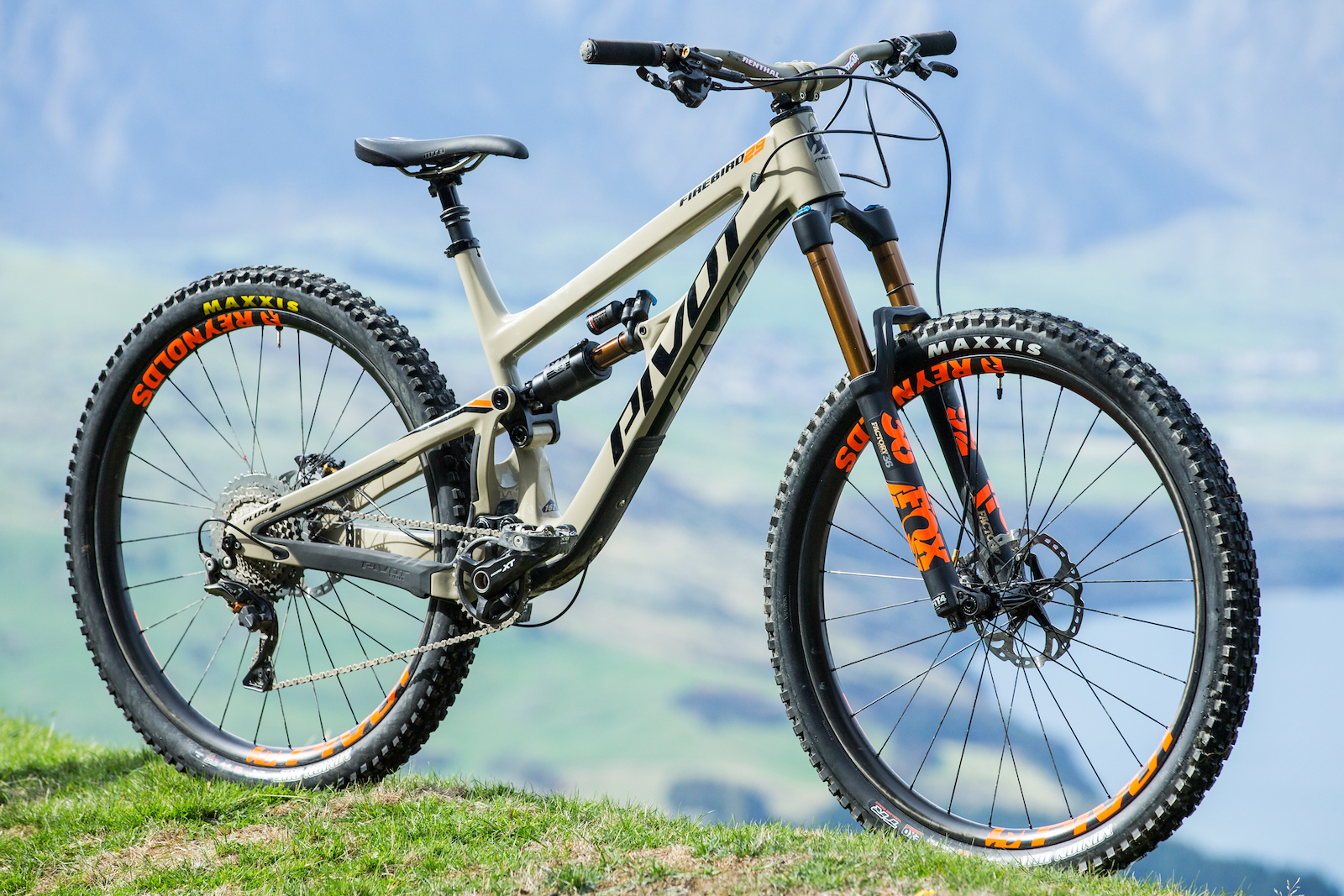 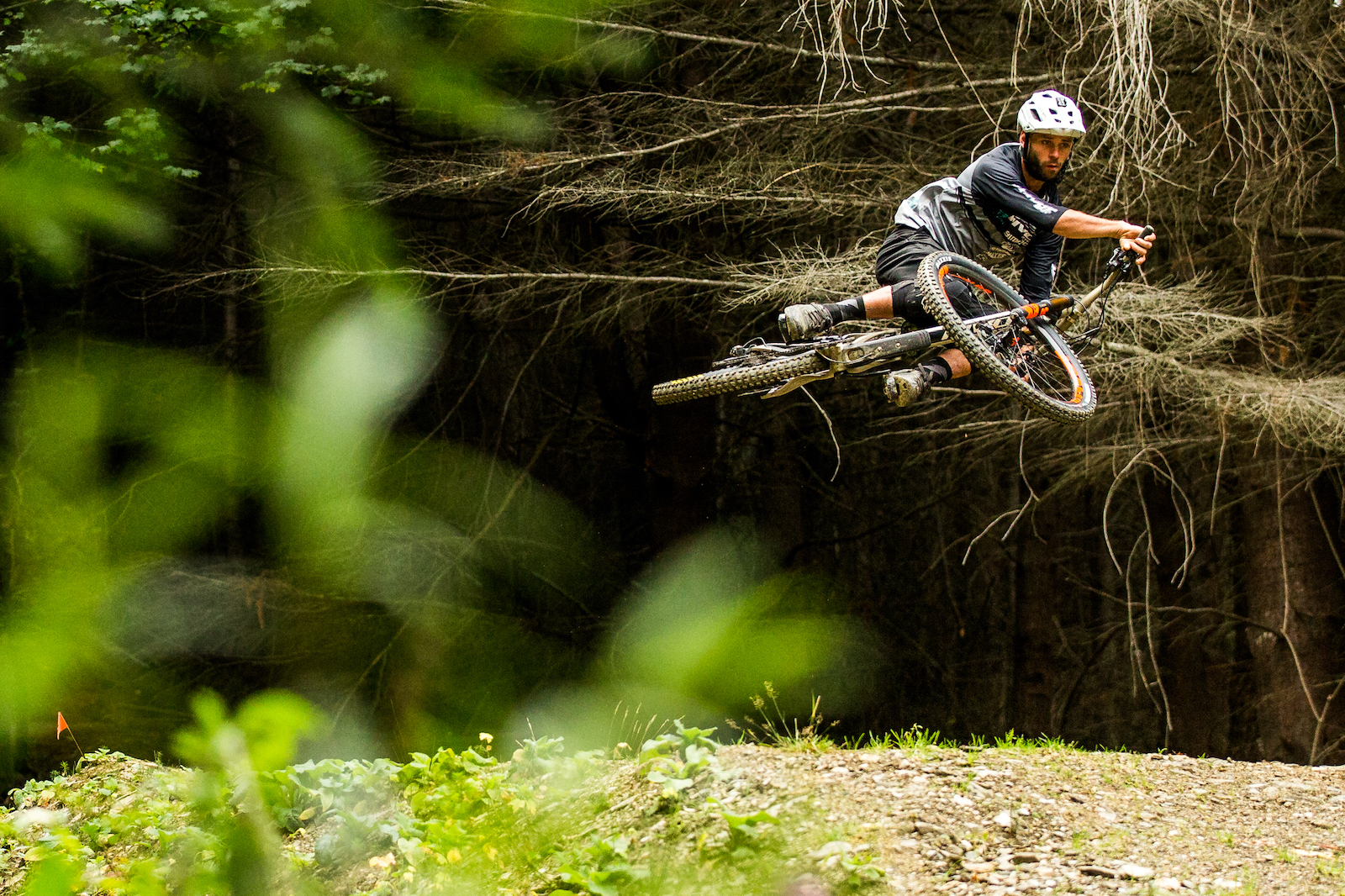 The suspension system of the Firebird 29 is strongly inspired by the compression curve of the Phoenix, the big sister DH race offering from Pivot. 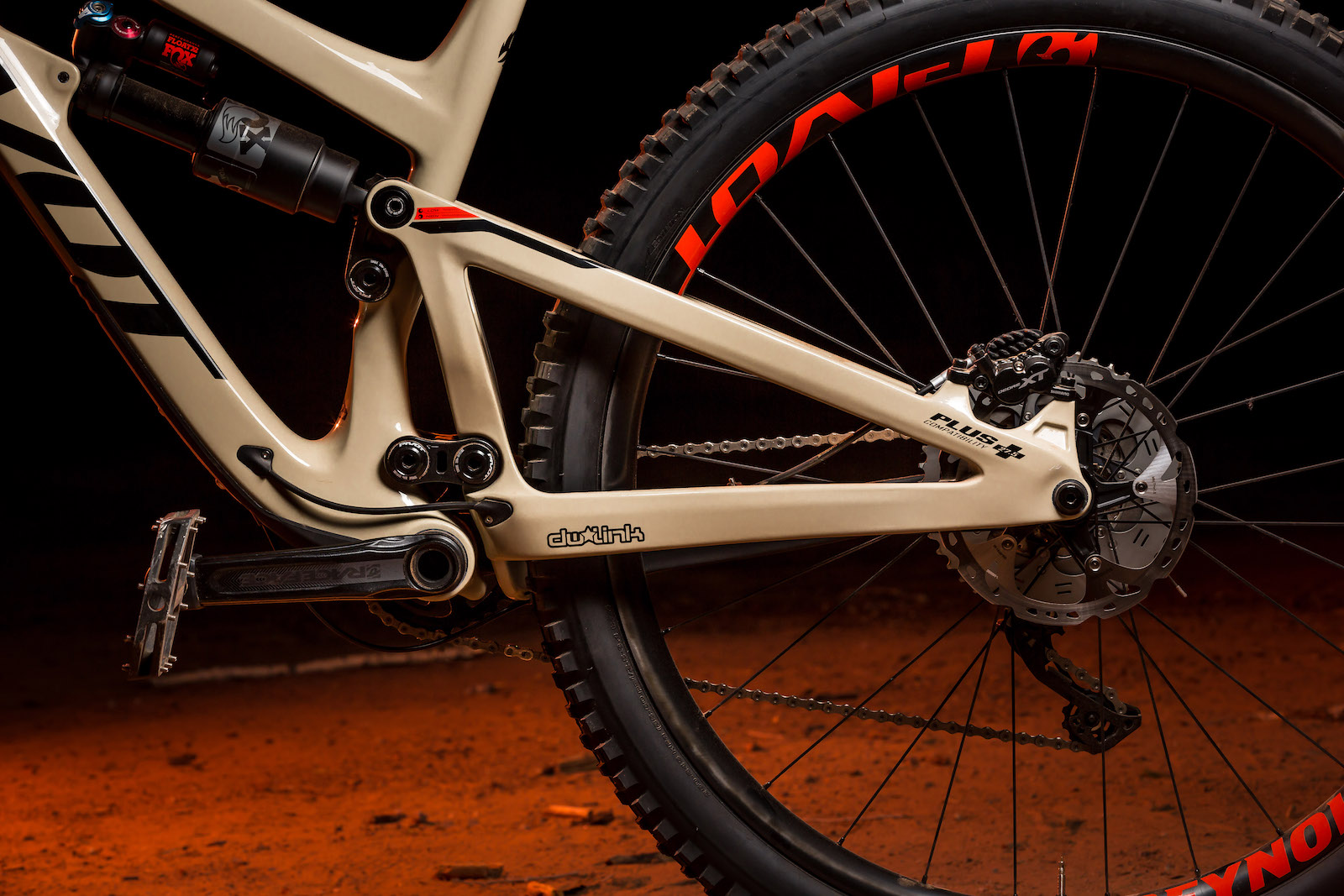 Oversized hardware, axles and linkages are used to maximize stiffness. 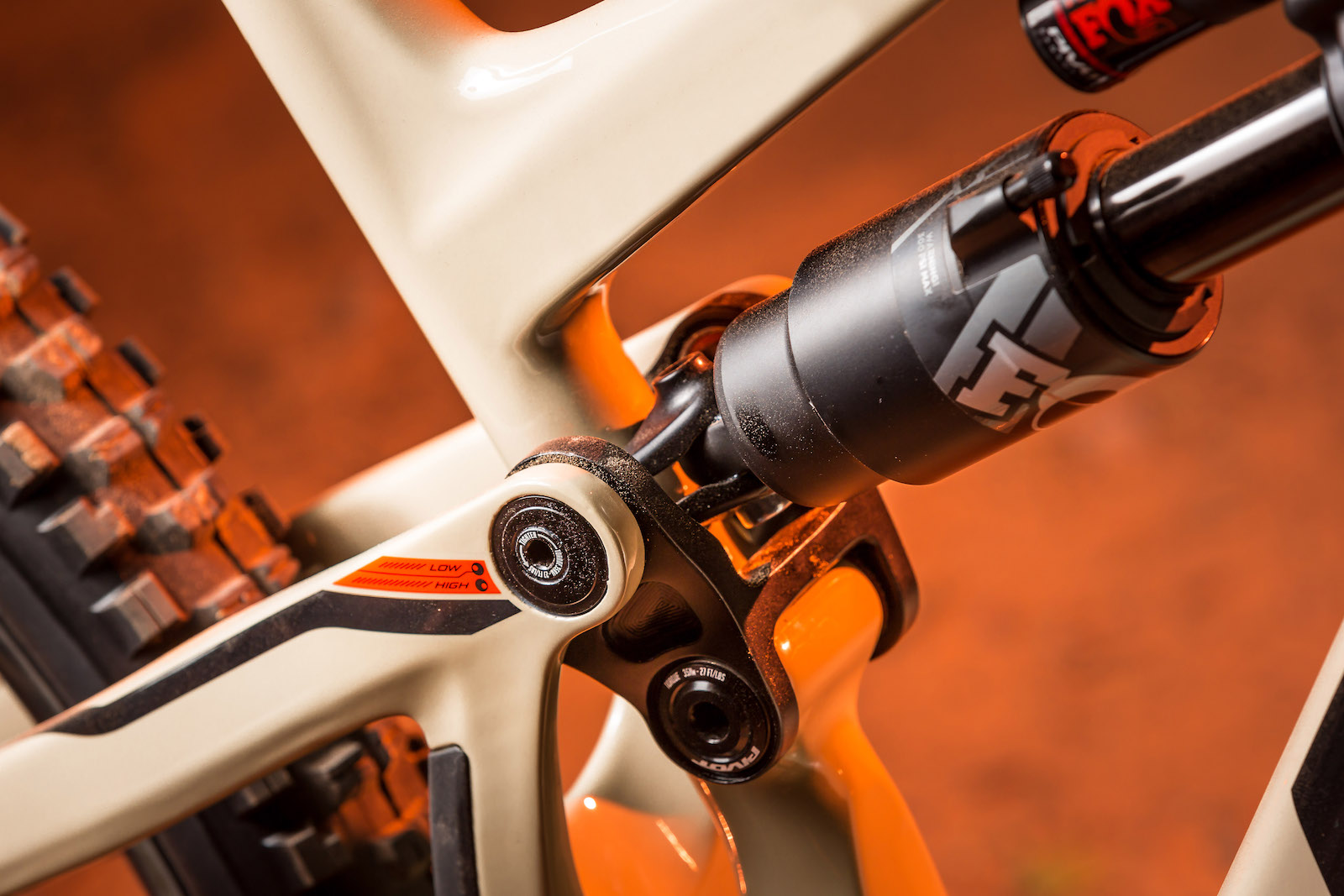 The Firebird 29 offers 162mm of travel, managed by a FOX Float X2 metric 230x65mm, which provides a nice low leverage ration. This gives Pivot for the ample tuning opportunity on the hydraulic side. A wide range of external adjustments provide the consumer with loads of options at home. 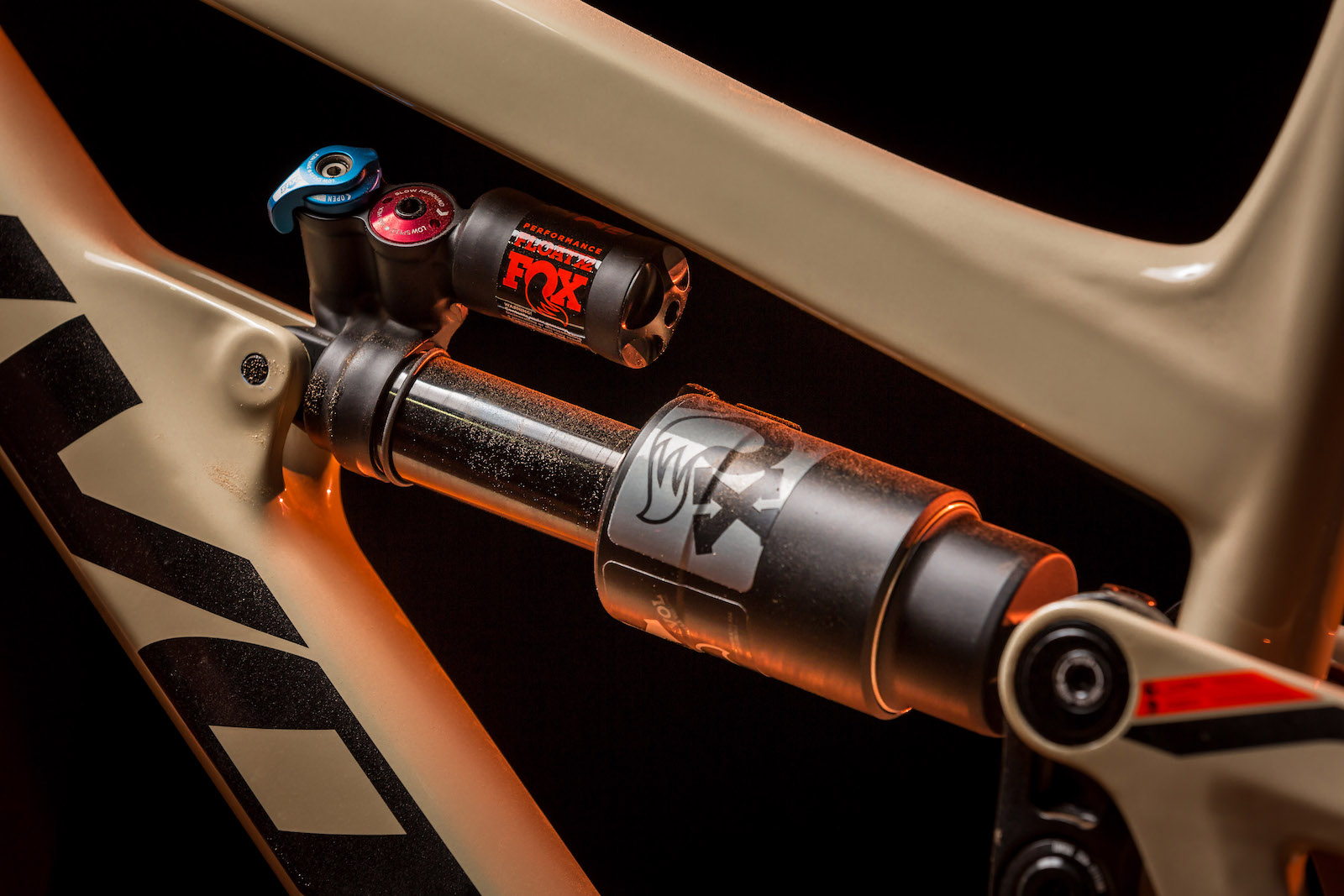 In the lower part of the top tube there is a small dimple that leaves room for movement at the rear shock’s reservoir. 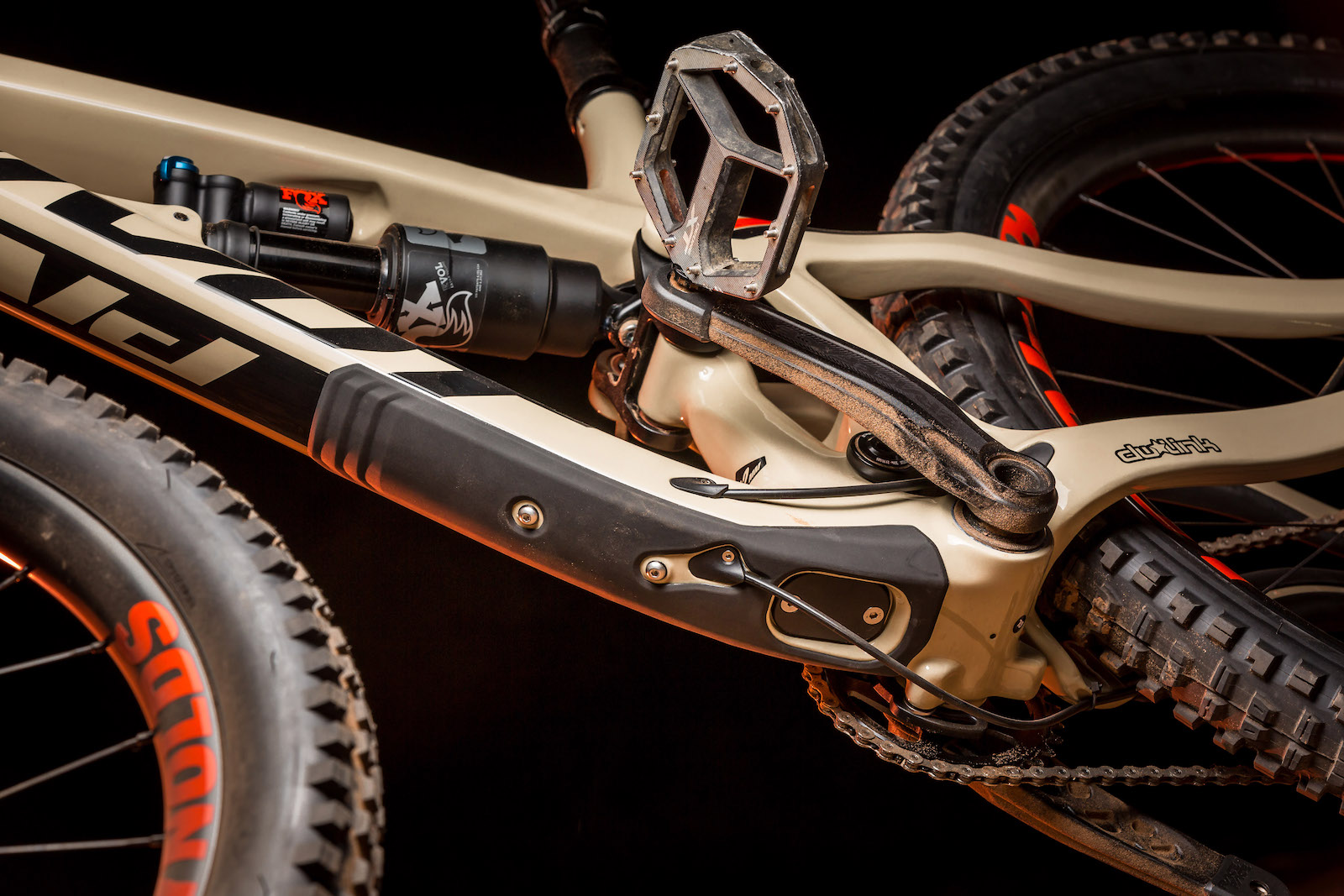 In the previous photo we also note the integrated battery mount for Shimano’s Di2 system. Pivot, however, states that the Firebird 29 is not fully compatible with the Di2 system since the rear end is not designed for the housing of the electric cable. Also in the previous photo the only support for a bottle cage, surrounded by the burly rubber downtube protector. Speaking of protection, the drivetrain side chainstay/seatstay flanked by rubber fittings all the way around. 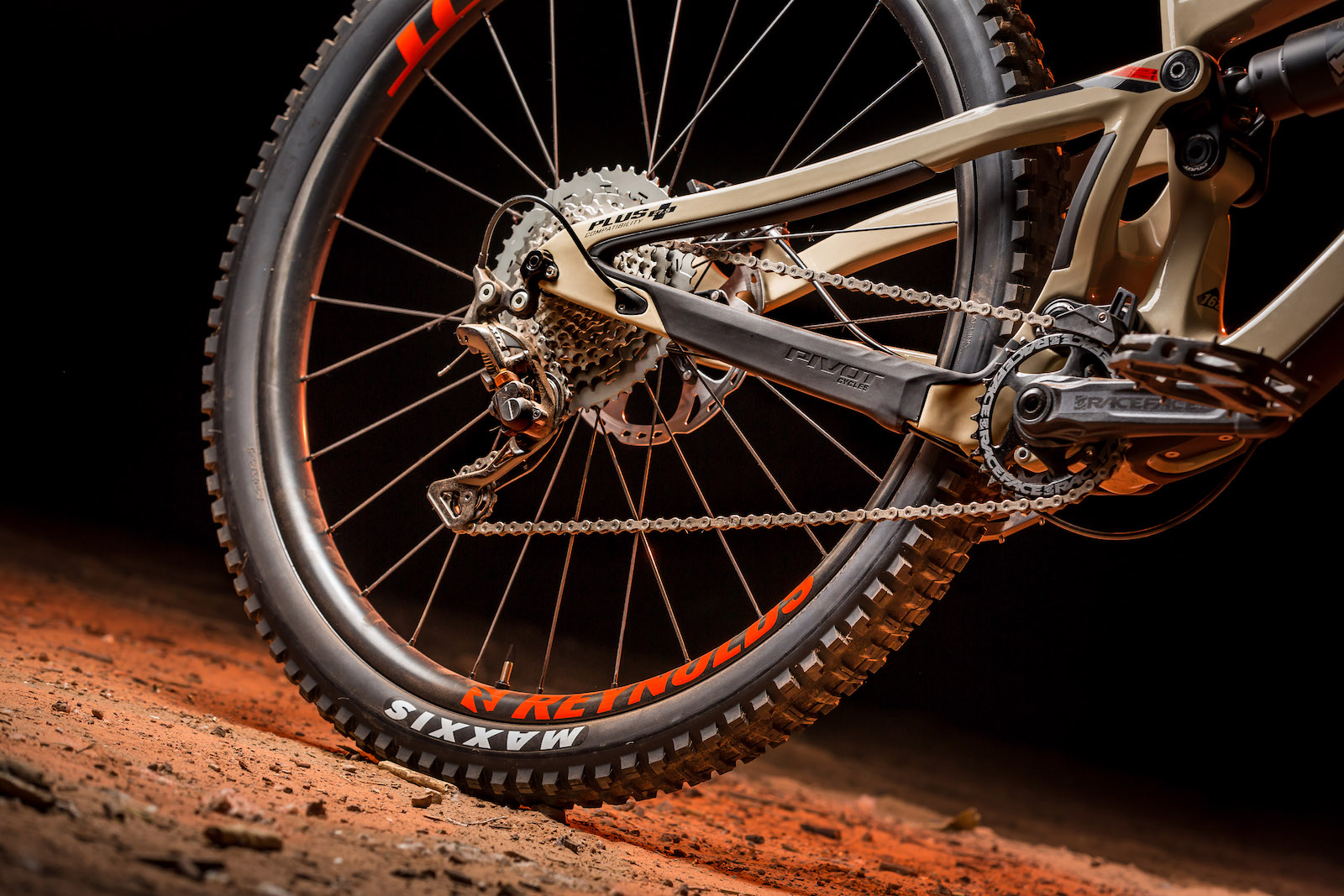 The cable routing, as you could already see from the previous photos, is internal and the entrance and exit ports take care of both sealing the frame to avoid infiltration and to fix the cable in place to avoid annoying noises. 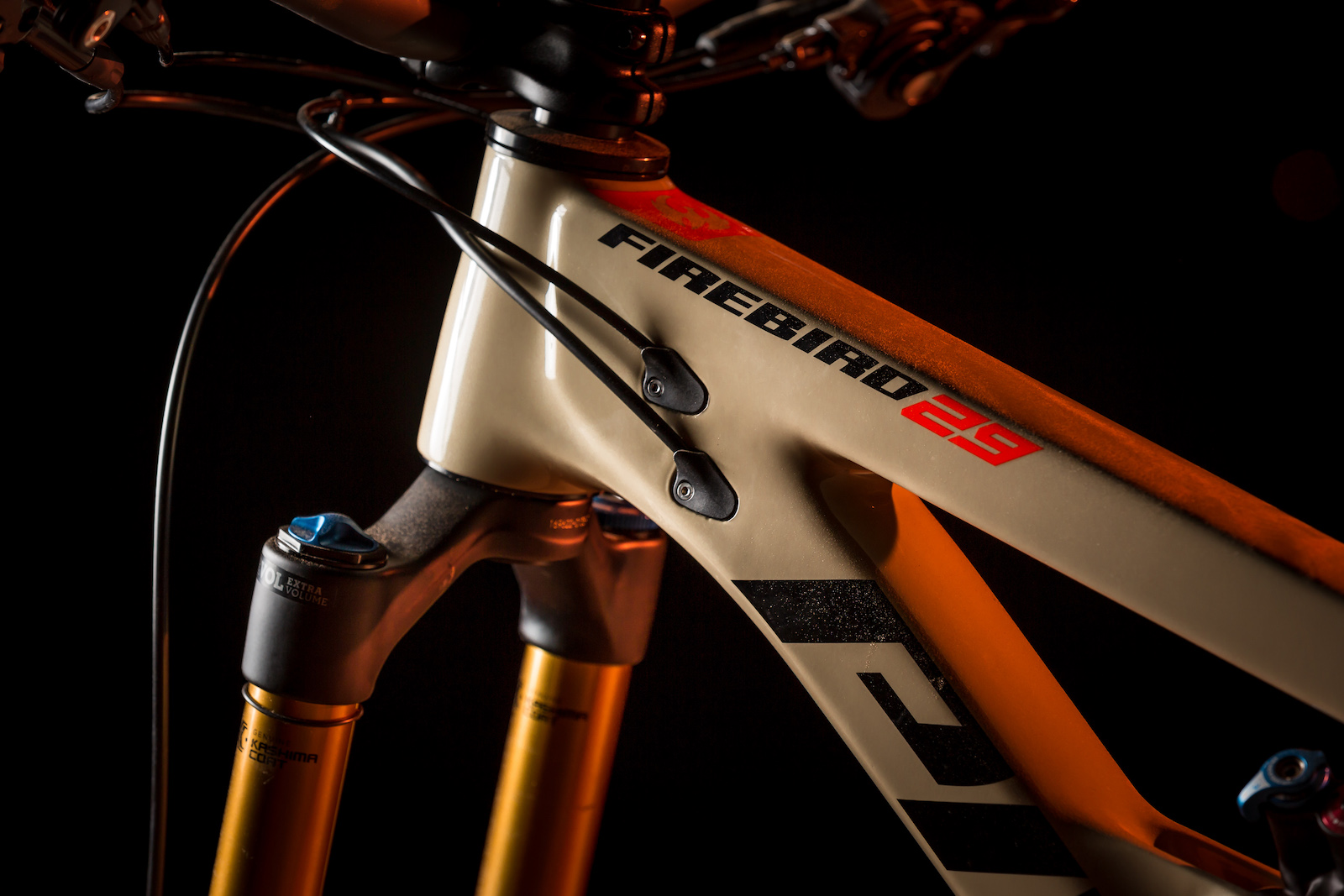 Pivot combines the Firebird 29 with a FOX 36 fork with 170mm of travel and Grip 2 hydraulics, a choice that confirms bike clearly has downhill performance in mind. The fork offset is a short 44mm. 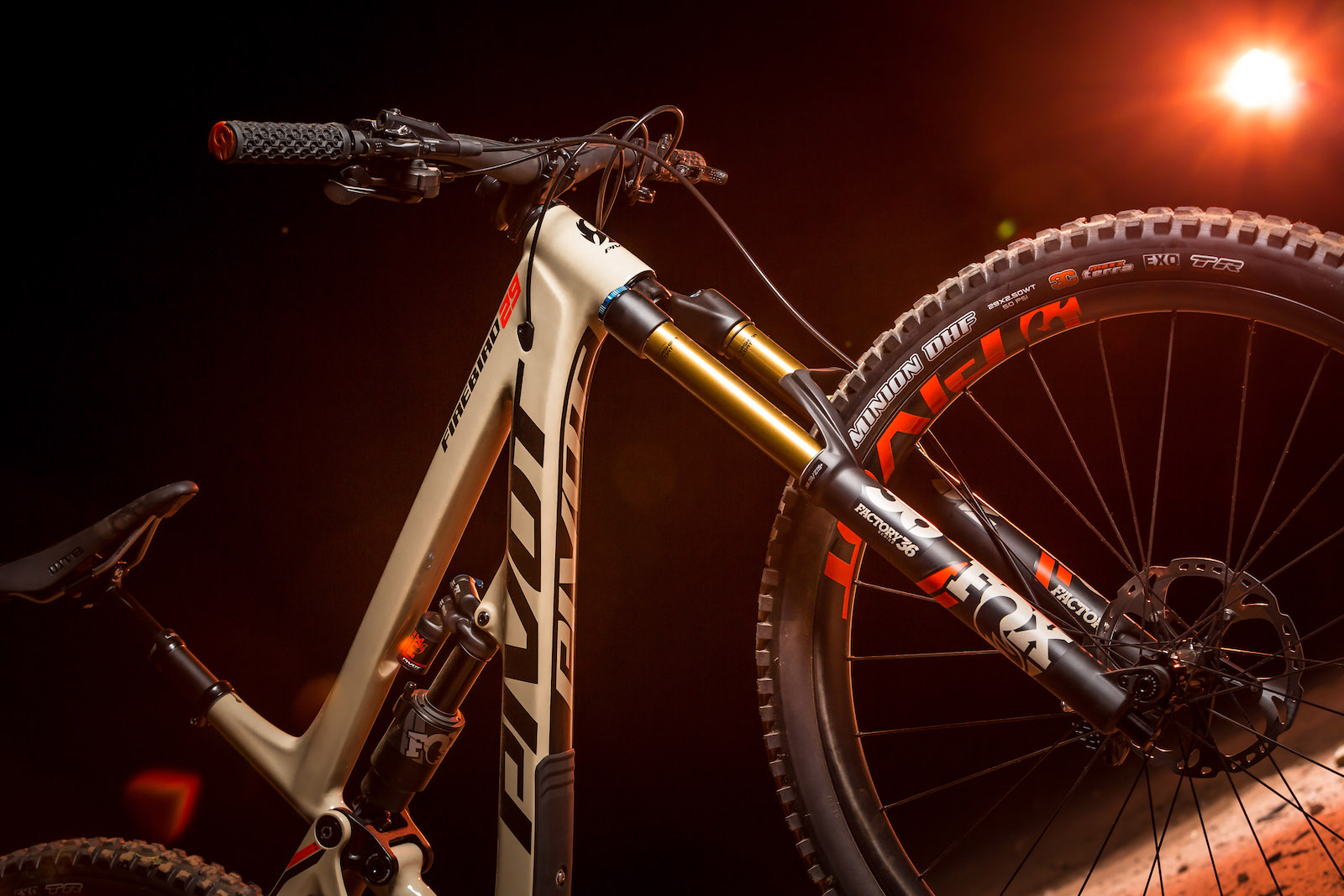 Pivot offers the option to switch the geometries between two positions, by utilizing a flip chip that modifies only the geometry without intervening on the behavior of the suspension. The difference between the High position and the Low position is about 6mm in the height of the bottom bracket and 0.5° in the head tube angle. Thanks to the flip chip, the Firebird 29 is able to accommodate even 27.5″ Plus wheels when set to the High position.

To further offer varying options in geometry, Pivot provides an additional shell for the headset with an increased height of 17mm. Thanks to this cap, the options increase. When combined with 27.5+ wheels and in the High position, the 17mm shell makes the geometries identical to  29″ wheels in the Low position. In conjunction with 29 “wheels, you can further slacked the head tube angle and/or raise the bottom bracket.

The brake caliper support is post mount 180m,m, therefore using 180mm diameter discs the caliper is mounted directly, without the need for spacers and adapters. The rear end is designed to accommodate 157mm Super Boost hubs. 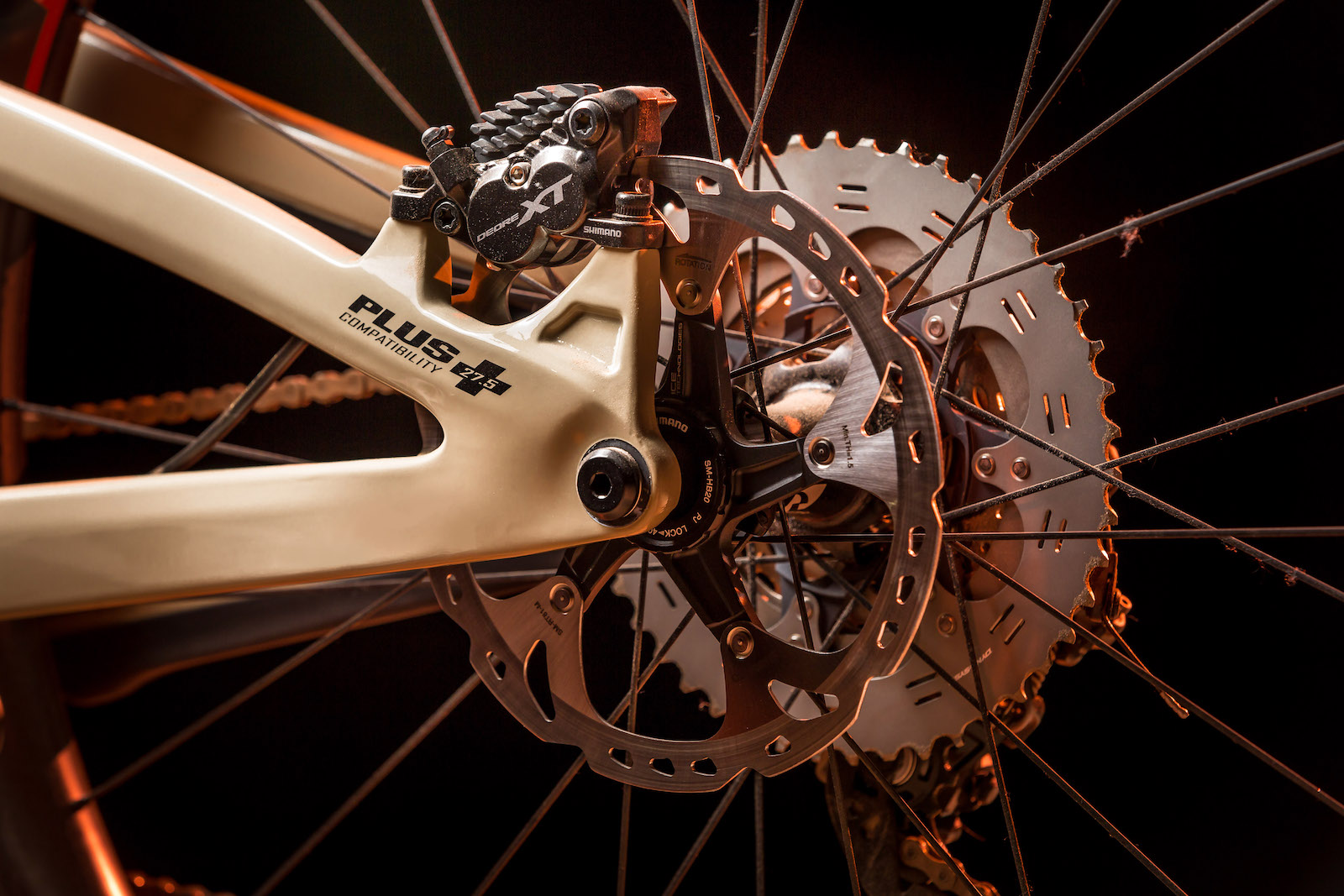 The 157mm Super Boost hub is not a new standard born for the Firebird 29, but an existing standard, available from virtually all hub manufacturers and was already adopted by Pivot on other previous models in its range to make a very short , rigid and robust rear end.

With the Super Boost 157 hub, the chain line increases from 52mm of the Boost to a good 56mm, but you do not need cranks with an increased Q factor. The Firebird 29 fits cranks with the same 168 / 177mm Q factor of Boost frames. The major chain line is simply obtained thanks to thechainring offset. In the case of fittings with a SRAM drivetrain, the chainring used is One Up Components, since SRAM does not currently have it in their range.

Pivot has also paid great attention to the issue of heel clearance, since they emphasize that most of the staff members have very large feet and are the first to clash with this problem. The shape of the Firebird 29 back end, as stated, allows more space for heels than even the 142mm Pivot frames of several years ago.

Another benefit is massive tire clearance, as shown in the photo below, which is abundant combined with Maxxis Minion DHR II 2.40WT. The space guarantees adequate clearance even in the case of abundant mud. Pivot states that the Firebird 29 can accommodate tires up to 29 × 2.6 “or 27.5 × 2.8”. 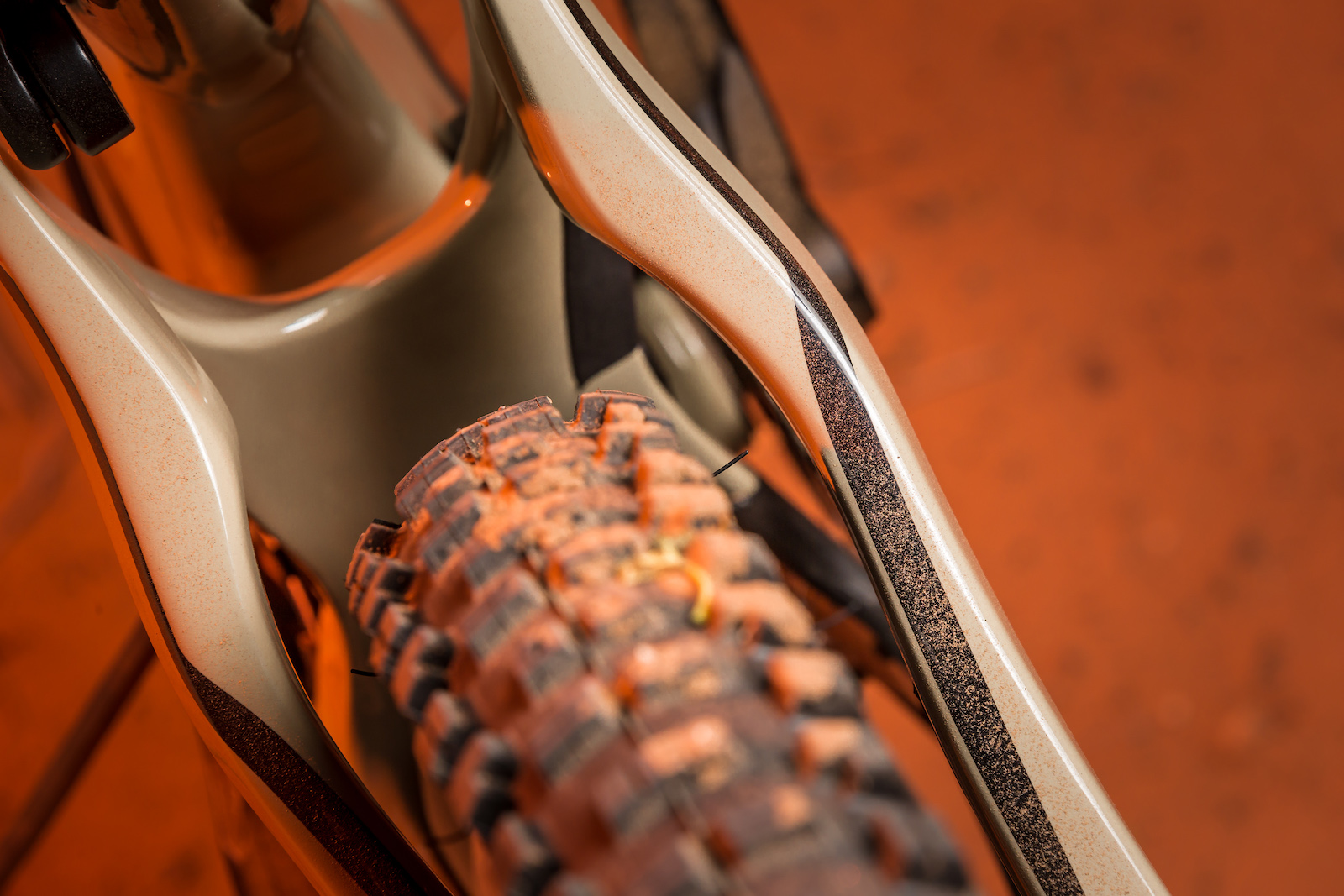 The geometry of the Firebird 29 has been renewed not only to accommodate the larger wheel format, but above all to offer a modern riding experience that combines stability and maneuverability: particularly long reach, a relaxed heada angle, very short chainstays and low standover. Keep in mind, there are two configurations anticipated, thanks due to the adjustable geometry. 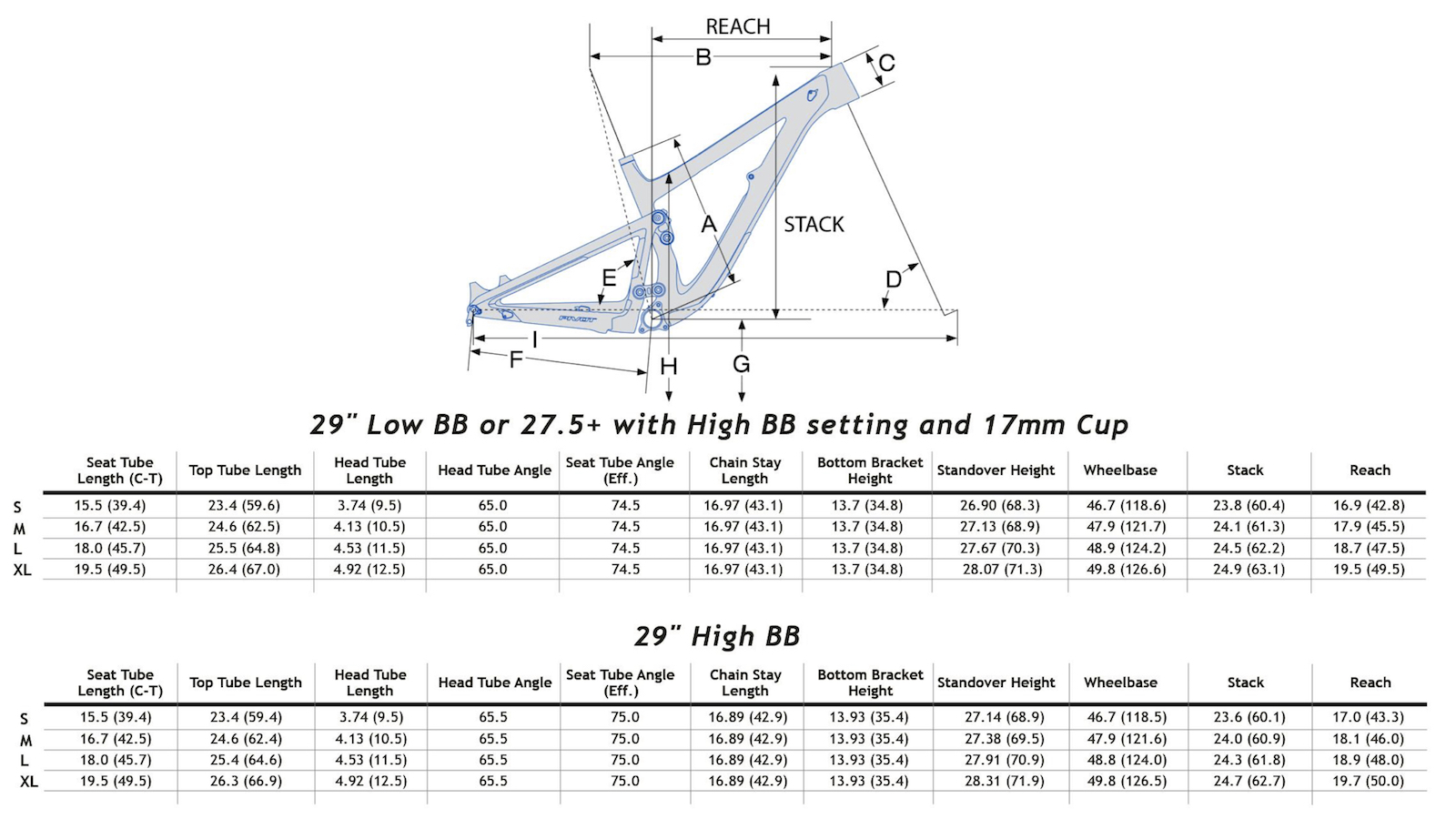 [Video] Home and away with Danny Hart