Vienna, March 17th 2015 – For the last ten years, the world’s elite mountain bike dirt jumpers have been gathering at Vienna’s town hall square for the VIENNA AIR KING. This year, the top dawgs are back from April 10th to 12th as the FMB World Tour Silver event celebrates its 10th anniversary. Brett Rheeder (CAN) has two consecutive victories under his belt and will be riding for a third. Dirt jump maestro, Sam Pilgrim (GBR) is a top rival in the line up, but the competition does not stop there. Gemma Corbera will also be the first girl to challenge the guys at a FMB event. Take a look at some of VIENNA AIR KING’s best moments from the last 10 years:

Brett Rheeder will have to perform at his best to defend the VIENNA AIR KING title. After a long winter break, mountain bikings’ top athletes can no longer wait to get back on to the dirt. 16 of the world’s best dirt jump riders have been invited and roughly 45 pre-qualifiers will step up to the mark to compete at this 2015-jubilee edition. With his rookie year behind him, Nicholi Rogatkin is now getting down to business and will fly in from across the pond for a crack at the crown. The North American athlete caused a sensation last year with his cashroll and signature-trick, the long dart front flip. 2014’s second place and best-trick winner Szymon Godziek (POL) will try everything to step up a notch for the victory. Then there is also the trick machine, Thomas Genon (BEL) who landed in third last year but has a bag full of new technical combo’s to show off in Vienna.

Per usual, the French-connection stack the line up with their best riders including, youngster Tomas Lemoine, Louis Reboul, Antoine Bizet, Simon Pages and Mehdi Gani. From across the Channel, Great Britain is sending renowned high-flyer Daryl Brown, Matt Jones and previous VIENNA AIR KING Champion, Sam Pilgrim. Tomas Zejda will be representing the Czech Republic, Anton Thelander will be flying in from Sweden and Oszkar Nagy (HUN) will be looking for a strong start to the season in Vienna. From closer to home, Peter Henke will be riding for Germany. 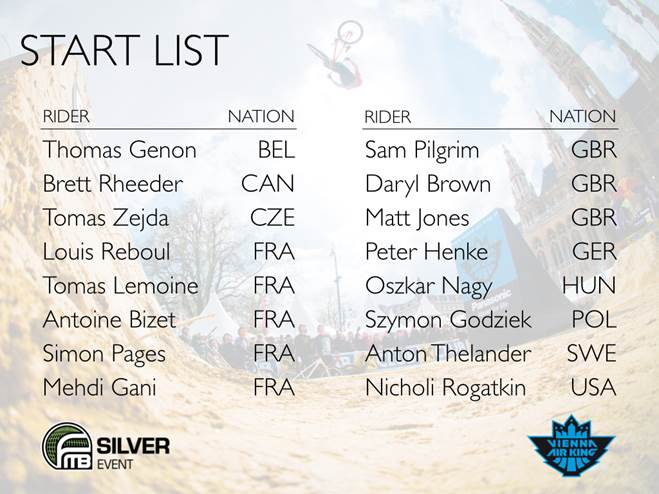 Alongside the big names, 45 pre-qualifiers will be given the chance to ride at VIENNA AIR KING. Ten of these riders are resident Austrians and will have the home crowd advantage of moving up into qualifying. One of Vienna’s crowd favorites and 2013 Best Trick winner, Pavel Alekhin is back to get the spectators pumped and throw down more epic combos. From Canada, young gun Bobby Lamirande and experienced trick machine, Sam Dueck will be on course, ready for business. And for the first time, a girl will challenge the boys on dirt. Gemma Corbera from Barcelona will compete against the guys in Vienna for a spot in main contest. For all pre-qualifiers, the competition will be fierce; 14 will advance to qualifying and ride against the set riders – a unique opportunity for upcoming riders. All the action will go down on April 12th at town hall square in Vienna.