Moab, UT (May 6, 2017)—Riders were greeted with a morning of overcast skies after a day of pre-riding in 90-degree weather at Moab’s Klondike Bluffs Trail System. Four timed stages with a 3,000-foot descent over world class, technical slickrock stoked out riders at the first SCOTT Enduro Cup presented by Vittoria of the 2017 season. 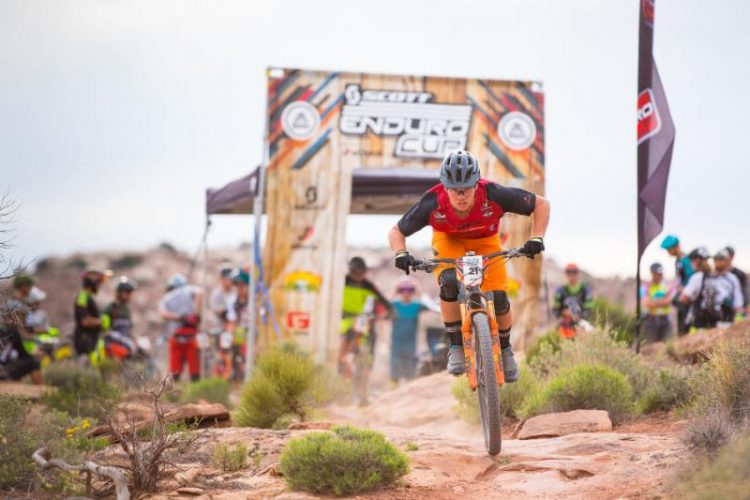 Yeti/Fox Factory rider Cody Kelley made a pit stop in Moab before flying out for Round 3 of the Enduro World Series in Madeira, Portugal. Kelley went on to take the win. “Today was good, we started early to beat the heat—fun day on the bike, we had a good crew, stoked to take the win. Stage four was a ripper.”

“Things are always interesting at the beginning of the season, to see where everyone is at. How their off-season training went. So yeah, stoked to just get out here and be in the race scene. I’m feeling really good. I’ve done two Enduro World Series rounds so far this year, feeling good, getting strong.”  —Cody Kelley

Trek’s Cole Picchiottino, lost momentum on stages one and two—but Picchiottino was able to excel through the final stages, going on to win stage four, a favorite across the categories.

“Stage three and four were technical and downhill oriented. Just rocky and rough. There were a lot of square edges so it was chunky the entire way down, and you really had to keep your momentum going the whole entire time.” —Cole Picchiottino

2016 Moab Pro/Open winner, Nate Hills (SRAM, Rockshox, Yeti) had high energy throughout the race, beating the spring showers and finishing in third. Competition in Men’s Pro/Open was tight as the top seven riders finished within a minute of one another.

In 2016, Cooper Ott completed a very impressive enduro season, racing and winning a number of US enduro events. She finished in third at the 2016 Moab Enduro Cup and put it together this year, taking thewin in Women’s Pro/Open.

“Favorite stage was four! There’s nothing like smashing through rocks at high speeds!—I raced a much cleaner race this year, which I think really contributed to the higher result. Less crashing and more having fun.” —Cooper Ott

“I switched to the Pro category this year and at first it was really intimidating. I rolled into my campsite and Teal [Stetson-Lee] was camping right next to me, so cool! —The experience of just getting the chance to ride with people that are on factory teams, that means a lot to me and it’s an honor to get to be with those people. The conditions were really windy, so I went into stage one just focusing on keeping it on the ground.” —Lauren Bingham

A full list of results from the Moab race can be found HERE.

Podium finishers in the Pro/Open category shared $8,000 equally divided between men and women. The podium athletes in the Expert, Amateur and Junior categories received gear from SCOTT Sports, Vittoria and G-Form. A special thanks to Chile Pepper Bike Shop for providing the registration and athlete meeting venue.