The Cape Epic 2019 was inevitably dominated by the Scott-Sram duo, Schurter and Forster, slowed down only by a puncture during the third stage. Overall, the two Swiss men have destroyed competition. An excellent third place finish went to Ferraro and Porro of the Trek Selle San Marco team, preceded by Avancini and Fumic of Cannondale. 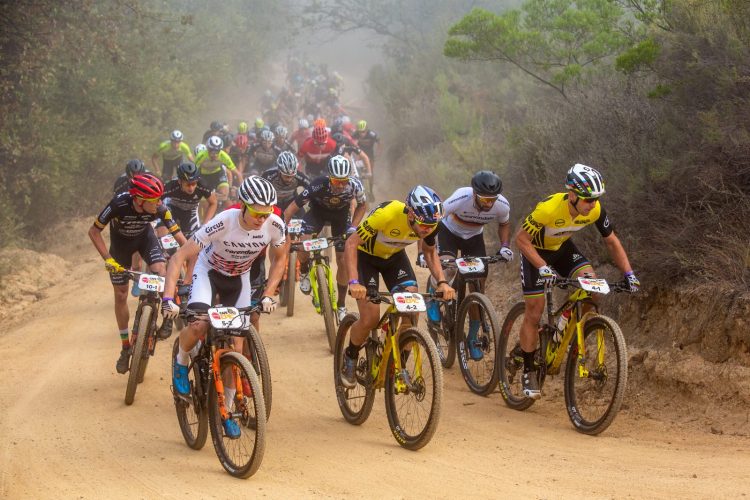 With 70km and 1 800m of vertical gain standing between Scott-SRAM MTB-Racing and overall victory on the Champs-Élysées of mountain biking at Val de Vie Estate, you could’ve forgiven them for playing it safe and cruising to the finish.
Nino Schurter and Lars Forster went into the final stage from Stellenbosch University to Val de Vie Estate with a comfortable eight-minute lead over second-placed Cannondale Factory Racing. This meant they had to watch only Manuel Fumic and Henrique Avancini to cap off a successful week and claim overall honours at the 2019 Absa Cape Epic. This they did smoothly, giving Schurter his second victory and Forster a golden debut by a margin of 7:36 over Avancini and Fumic. “This was amazing,” Schurter said of the title after the finish. “It’s a really special one to win. It’s really tough to win this race you need to have a lot of good luck and a strong team. We are super stoked about it.”
“Yesterday I was suffering and today I was suffering more,” a visibly delighted Forster explained how the final day played out. “Luckily I had a strong horse with me who still had some left in the tank.” 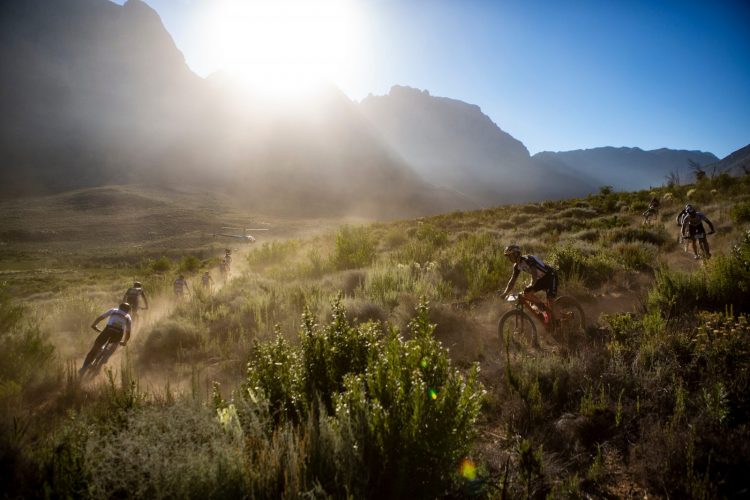 Their conservative run to the finish allowed other teams to gun for coveted Grand Finale stage honours. Queen Stage victors Matthys Beukes and Phil Buys of PYGA Euro Steel seized the initiative early, attacking up a climb in Jonkershoek. The only team who could stay with them was KROSS-SPUR, who had been aggressive all week, winning various Dimension Data Hotspots but to date had been unable to convert that form into a stage win. A win they desperately wanted after being put out of GC contention with mechanical issues on Stage 1.
While the likes of CST Sandd, Trek Selle San Marco, both 7C CBZ WILIER teams, SpecializedFoundationNAD as well as the Team BULLS outfits of Heroes and Young Guns were left to chase across a route which featured the best of Jonkershoek, Vuurberg, Boschendal and Val de Vie’s trails, KROSS-SPUR Racing and the South Africans worked well together all the way to the finish. 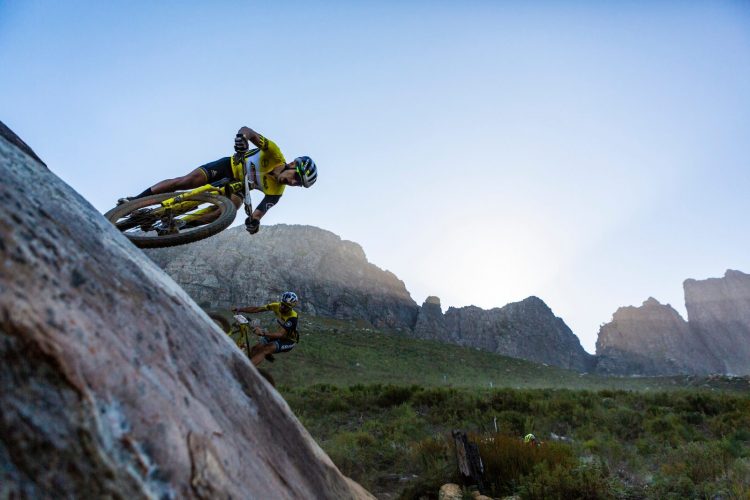 Onto Val de Vie Estate and the long final stretch it came down to a bunch sprint, which saw Matthys Beukes cross the line first, but Sergio Mantecon Gutierrez and Ondřej Cink followed closely in second and third, giving them stage honours.
“It was so so close,” said Gutierrez at the finish. “It was the shortest stage but still very tough with lots of singletrack and many climbs.”
“A stage victory is super important,” he added outlining how they had to change their strategy of overall GC aspirations after their disastrous Stage 1 mechanical. “We were super focused on a stage win after that; finally, on the last opportunity on the last stage, we managed that, so it is very special.”
It also proved a special day for Sebastian Fini and Martins Blums of CST Sandd who finished on the stage podium for the first time in the race. As well as SpecializedFoundationNAD’s Alan Hatherly and Matt Beers, who finished sixth on the day doing enough to stay in fifth overall and win the Absa African Men’s Jersey.
If that has inspired you, Early Bird entries – which sell out almost instantaneously each year – for the 2020 Absa Cape Epic open at 15:00 GMT+2 on Monday 25 March. Have your browser set to www.cape-epic.com to ensure that you’re in with a shot of guaranteeing yourself a spot at the start. 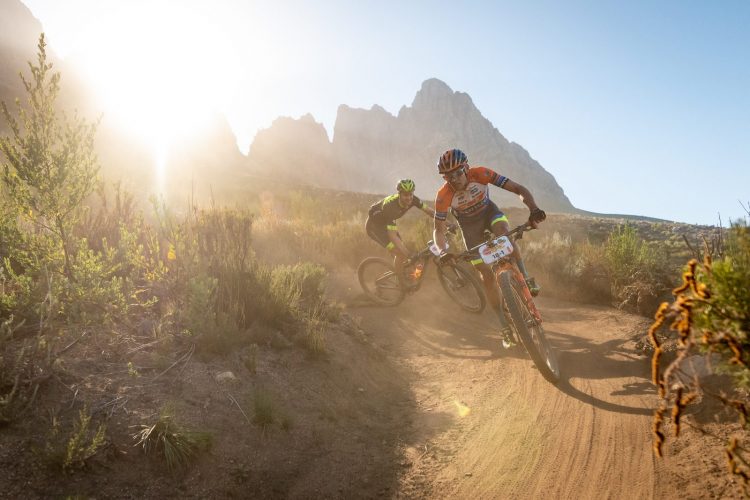 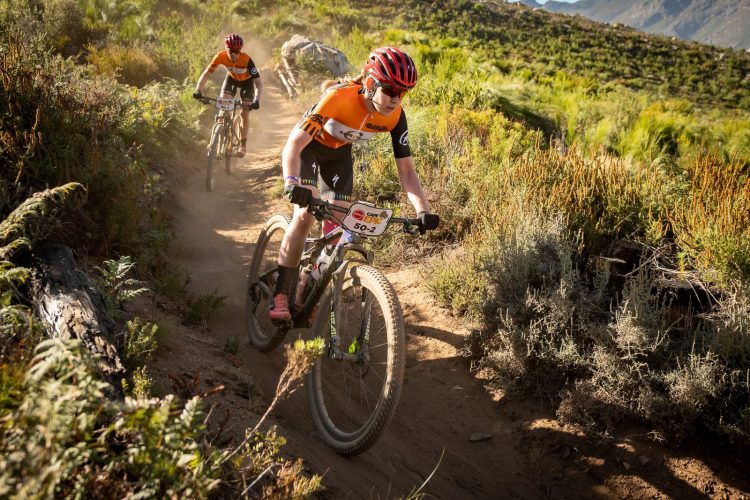 Annika Langvad and Anna van der Breggen (Investec-songo-Specialized) collected their seventh stage win at the 2019 Absa Cape Epic to give Langvad her fifth victory in the gruelling eight-day race.

The Investec-songo-Specialized pair established their superiority on the opening Prologue on the slopes of Table Mountain National Park a week ago and never looked like being headed throughout the eight stages around the Western Cape. Even when Lill and Morath pounced on the chance of a stage win on Friday, when Van der Breggen was having a rare off day, it always looked like nothing more than a temporary setback for the dominant race winners.

In the 70km final stage from Stellenbosch University to Val De Vie Estate, Lill and Morath ended just 17 seconds behind but were over 30 minutes behind on GC. Ariane Lüthi and Maja Wloszczowska (Kross-Spur Racing) finished third on both the stage and overall standings.

Langvad was surprisingly calm about collecting her fifth win and matching the record of Absa Cape Epic greats Karl Platt and Christoph Sauser; her focus was rather on Van der Breggen and her first victory. 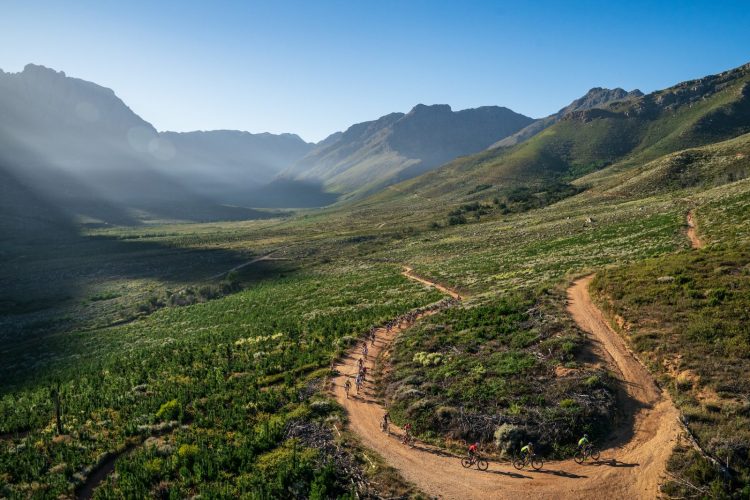 Van der Breggen looked relieved to have completed what she believes to be her biggest ever week on a bike.
“It was a really tough week. It was such a new experience and so nice to do something totally new and see the boundaries where you can push your body. “Sometimes I did not like the suffering, but it was such a nice thing to do. I do not think my body has ever been this tired and I do not think I have ever spent so many hours on the bike in one week. It was hard at the beginning, but now I know how it feels to achieve what we did.”

And what will it take to beat Langvad, who has now won all five times she has started the Absa Cape Epic?
“I don’t know” she said with a smile – and it seems her opponents don’t know either.

In the race for the Absa African Women’s Jersey, Theresa Ralph and Sarah Hill of team Galileo Risk comfortably completed the stage in sixth position, the same place they ended all week, winning the Jersey for 2019. [Video] How to Ride a Drop