Nuremberg, 6 September 2014 – Amazing tricks, top-notch riding and an electrifying atmosphere – the world’s best 24 mountain bike slopestyle athletes put the ancient city of Nuremberg at the pinnacle of action sports during Red Bull District Ride. Over the course of two days, 84,000 fans filled the weaving alley ways in this historic city. On Saturday along, more than 62,000 spectators lined the streets around the hand crafted parcours, designed to push the best riders to their limits. Flowing through the cobbled streets, Canadian Brandon Semenuk linked up the perfect run to seal the victory. Following closely behind, was his fellow countryman Brett Rheeder, third spot went to Belgian Thomas Genon. Further information and results on www.redbulldistrictride.com. 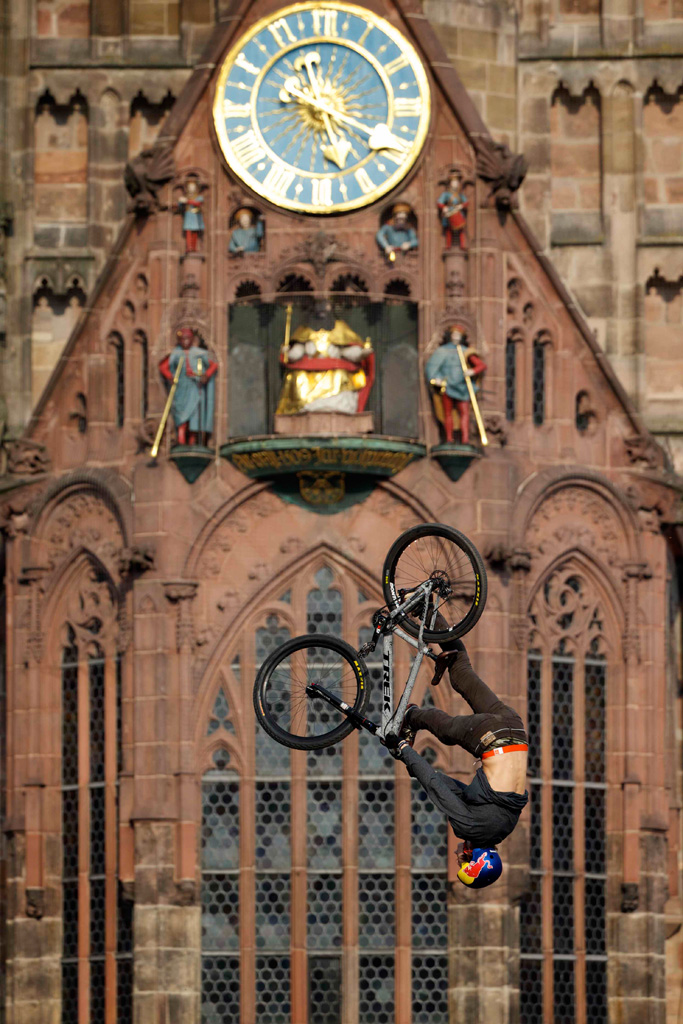 From the castle to the main square, the historic city of Nuremberg was once again the stage for the return of Red Bull District Ride. Through the cozy medieval alleys, fans could get up close to their idols as the most talented mountain bike athletes flew between the buildings, mere meters away from the tape. The madness began with an incredible eight meter drop from the castle walls. It then continued to weave through the cobblestone-alleys of the Franconia capital. The course was spiced up with a range of diverse obstacles, that had athletes searching for creativity. The most unique feature was the open loop in the GoPro Upside Down District. The third section, the Amarok Four Pack District sent the riders flying high above the crowds before hitting the Pick Up! Street Cannon District which required a solid bag of street style skills. Despite having to throw down the biggest and baddest tricks throughout the course, the final Big Air District is where riders could make or break their run. On the gigantic final jump, athletes soared 15 meters to the landing and performed mind blowing tricks roughly eight meters above the ground. Needless to say, there was no room for error. Standing above a sea of cheering fans, they dropped in from the mayor’s office window on the fourth floor of the city hall and ran up speeds of 60 kph before taking to the skies.

On Saturday morning the full pack of 24 riders was slimmed down to 12 in the qualifying rounds. Towards the end of the finals, it became apparent that the battle for victory boiled down to a head-to-head battle between the two Canadians Brett Rheeder and Brandon Semenuk. The atmosphere was tense, but nonetheless, spectators kept shouting and cheering to show their support. Rheeder took the lead by a tiny margin after the first run, but his head start was short lived as Semenuk put together an unbeatable run, gaining an advantage of just 00.84 points. The 23-year-old Canadian dropped in with a backflip one foot can and completed the first district with a technical 540 barspin. A blind flipwhip and a backflip through the open loop linked the second district together nicely. An oppo-double tailwhip and a 720 barspin sealed district three. In district four, Brandon rocked a clean 360 x-up over the Street Cannon. His incredible run was finally over with a stylish backflip barspin to one-foot can on the massive Big Air District. His efforts resulted in a score of 92.87 and rewarded him with the victory. 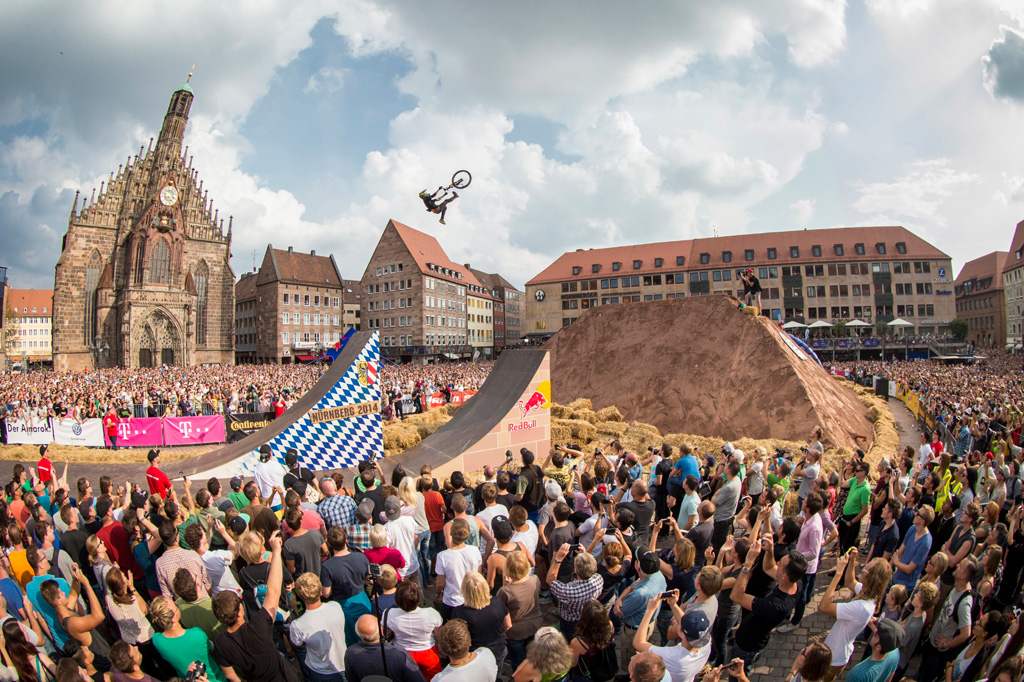 Brett Rheeder impressed the judges with his corked 720. Rounding off the podium was the Belgian, Thomas Genon, who showed a massive flatspin invert in the Big Air District. “I am so stoked that I made it to the top of the podium”, said Brandon Semenuk. “With such an amazing number of spectators Red Bull District Ride is totally different from all other events. I am overwhelmed that I could deliver such a run.“ By grabbing the win, Brandon Semenuk overtook Anthony Messere in the FMB Diamond Series ranking and is now the hottest contender for the FMB World Tour champion title. 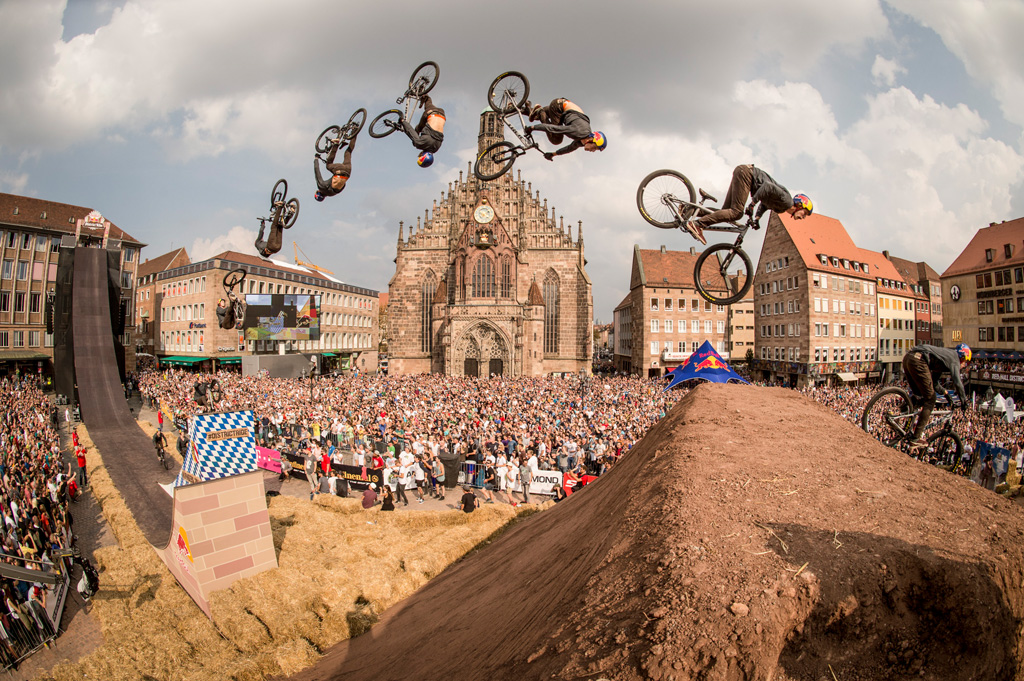 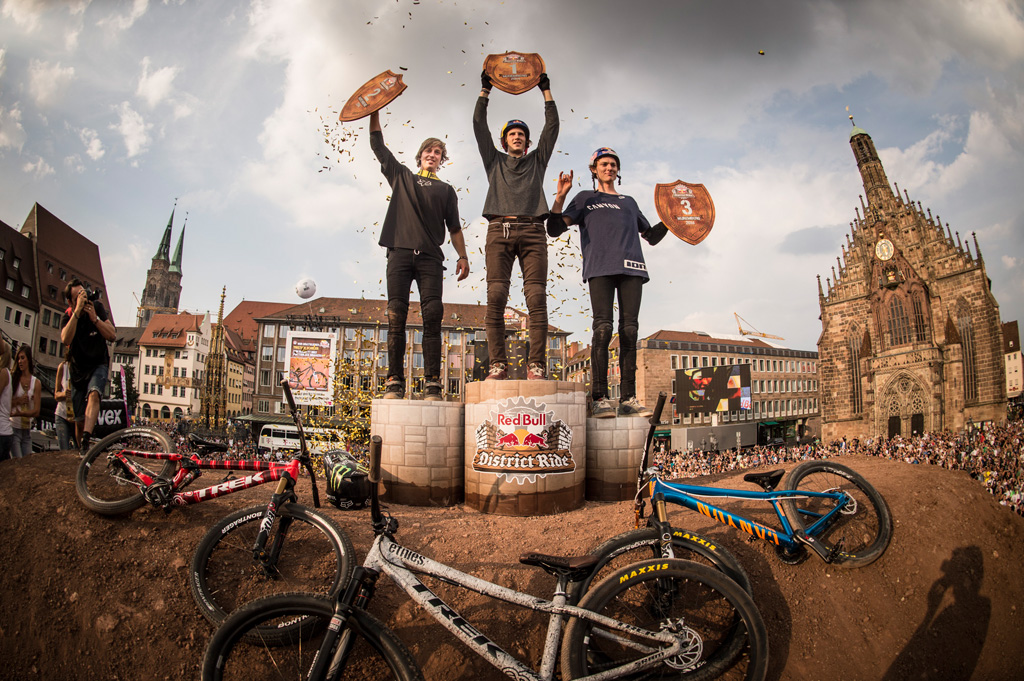 About Red Bull District Ride:
After four editions in 2005, 2006 and 2011 in Nuremberg/Germany as well as in Catania/Italy (2006), Red Bull District Ride has gained the reputation of a legendary event. The top mountain bike athletes gather to compete at a unique urban setting and entertain thousands of spectators with their tricks.