The EWS Winter Park round as told by Justin Leov. Photos by Jérémie Reuiller. Enjoy!

Next stop on the EWS Calendar was Winter Park Colorado. This round presented a few differences to previous races, such as the bike park environment, which saw the racing moving away from the European alpine terrain, also the racing at high altitude. Coming into this event I was nursing a couple of small injuries, which I had been working to recover since La Thuile and Valliore. A strain in my knee is awaiting diagnosis and treatment until I return to New Zealand in September, while ongoing tendonitis in my wrist was triggered by the long runs in Valliore. The weekend saw me relying on ice and kinesio tape to see me through the racing.

Once again we had a different format of racing for Colorado. Three days instead of the usual two. The format also saw us practice two stages, race them the following day, then the afternoon was spent practicing the following days stages. This meant that through the weekend you were either racing, practicing or sleeping!

There seemed to be a typical weather pattern, which was hot and dry in the mornings and around mid afternoon each day a storm rolled in. As a result of this the lift would shut down due to lighting. We were lucky for the first day of racing that our stages were to be raced in the morning. 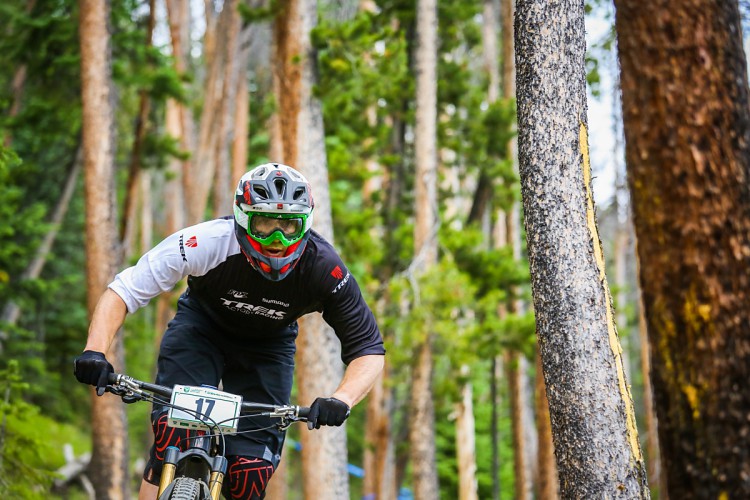 Stage 1: This was a stage which was one of the longer bike park trails. Lots of berms, jumps, up hills and some physical pedaling straights. First stage of the weekend is always the one I find I’m nervous for. Generally after the first stage you settle into a rhythm or look at the areas you need to improve on. Before this stage I did a short warm up, my knee was sore so I wanted to save it as much as I could for the stages. Dropping in for my run and I was feeling tight. When I hit the first uphill section my usual power just wasn’t there. The jumps were fun on this stage but I finished off the pace in 11th.

Stage 2: This time less on the pedals and more of a Downhill Bike park stage. A couple of rock gardens and a section at the bottom where you needed to carry speed through rocks and flatter corners. A short but fun stage, a lot of guys knew this one, as it was the main trail of the bike park. With a stage already in the legs my body felt a lot better than the first stage. My knee felt good and I was ready to give it a charge! This stage seemed to flow a lot better, you could breath both of which contributed to a better feeling crossing the finish line in 5th place. 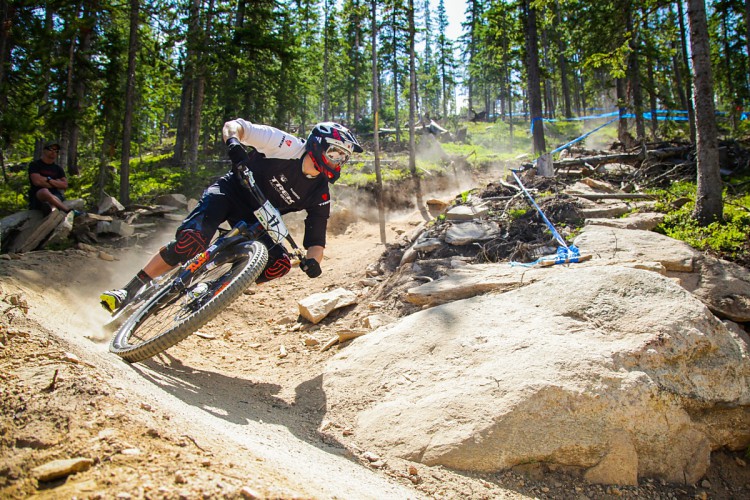 The rest of the day was spent practicing stage 3 which was over the backside of the mountain, it was a big day in the saddle. An important piece of equipment for reducing the amount of runs we need to make is a helmet camera. Being able to study the footage of a stage is so beneficial and with limited practice time its a valuable tool. My MET Parachute comes with a very handy removable support for the helmet camera. An Allen key is all you need to put in on when needed or to remove it when not.

Day 2
Starting day 2 we had another surprise to the format. We would be meeting at 8am to practice stage 4 and 5 after a pedal liaison from the paddock area. A good warm up for the day with a decent climb before we would then race Stage 3, 4 and 5.

With only the one run on stage 4 and 5 I knew they were going to be hard. The terrain on these two stages was natural with tight corners in the trees and small stop start corners in some places, which made it hard to keep the flow. You needed to watch your handlebars on the trees and keeping traction while racing would be a challenge. 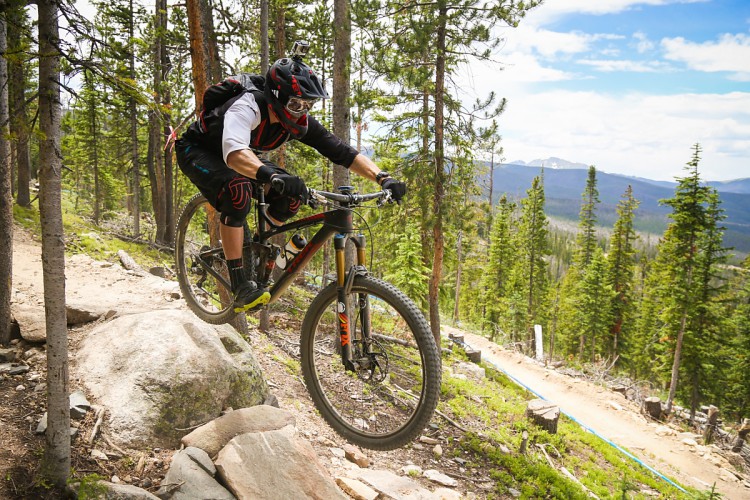 Stage 3: The name of this stage was Mountain Goat. A rocky natural stage, technical up top and then sections where you needed to carry speed over rocks in the middle then finishing on wide open fast fire road. I liked this stage and felt good in my run crossing the line in 4th. The finish of this stage saw us have a small climb to get to the start of stage 4.

Stage 4: The shortest stage of the weekend, just over 1 min 25 of racing with awkward trees to catch your handle bars on and the loose tight corners which were hard to hold speed. I never got into the flow this stage and fighting my bike and the terrain I was happy to see the end of it. 18th position, was a kick in the teeth!

Stage 5: was the final stage for day 2, a longer version of stage 4 but more physical. The terrain was in a forest which had been cut down so logs and stumps were everywhere. Care needed to be taken not to clip the pedals, it was easy to make time costing mistakes. As I sprinted off the start line I caught something with my back wheel and nearly had a big crash. Somehow I managed to stay on my bike but it was one of those moments when your heart nearly jumps out of your chest. The rest of my run was a mixture of small mistakes and fighting my bike again. I was frustrated to close the finish line but happy at least the stages were over. 13th place. 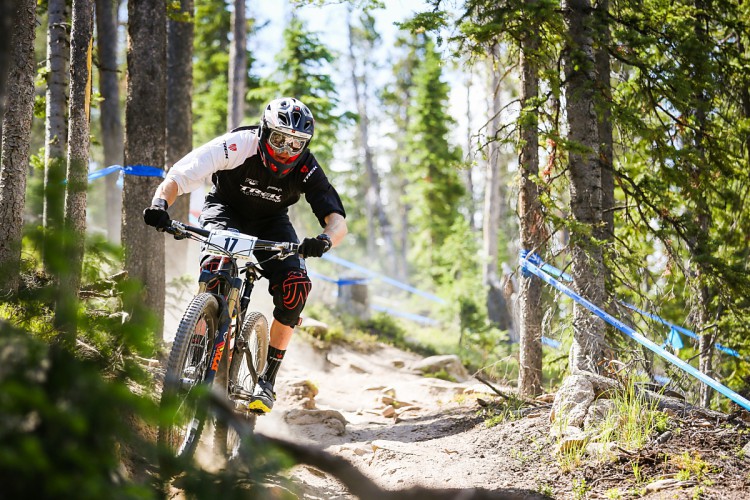 I couldn’t help but feel frustrated as I sat on the lift to go and practice stage 6 and 7 for the afternoon. I needed to make up some time on the final day and to do that required a big effort in both stages. I worked hard learning the final stages and when I got back to the Condo I could feel the efforts of the day. An ice bath and stretch to recover.

We started stage 6 and this would be the most physical stage of the weekend. This stage had some really long flat sections in the trees, while it also had the challenge of catching your handles bars, especially when you were tired. It then had a big flat pedallly section in the middle of the course which basically finished you off before a fast fire road to the finish where your really were just hanging on your bike. The unfortunate surprise of this stage was that once we got through all the pedalling and to the fast finish we came across an accident. It was awful to come across one of the women riders who had injured themselves. People were on the course trying to stop us but in such a fast section and without any sort of warning flags myself and 3 riders were past the accident and finished the run before all the other riders were stopped. Back in paddock there was discussion as to what should happen, re run all or just the riders who were stopped. It was one of those moments when you didn’t want to go up for a rerun but the sporting thing to do was to go back and do one to be fair to all the other riders. I made the decision to go up and so did the other 3 so I was happy to see everyone pushing for a fair race. 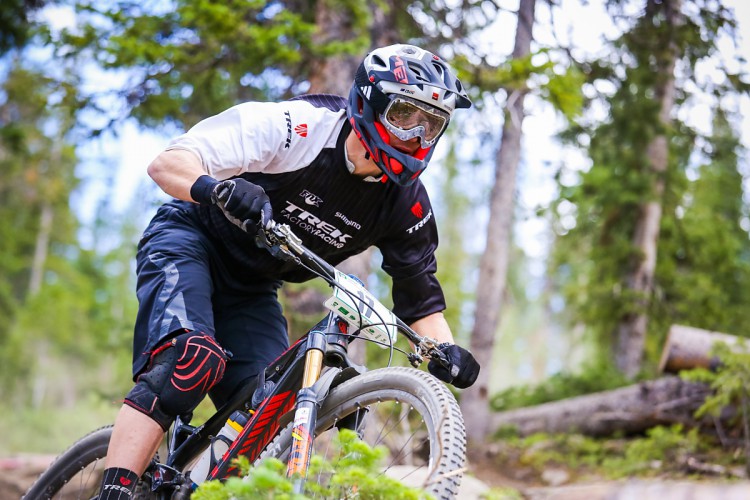 The effort in the second run was equivalent as I dropped in for the rerun. My legs didn’t have the same power any more and I was having to ride a gear lower. Without any warning I lost the front wheel in a turn and down I went. I was a bit gutted because it was not the stage you could afford to crash on and I was trying to make time not lose it! I finished out my run with everything I had left in the tank and crossed the line in 10th.

Final stage: This was the downhill stage of the weekend and all I wanted to do was to leave nothing on the hill and really go for it. With a tire change and a few adjustments to my Remedy I had little time for a warm up, I was straight off the lift and into the start gate. My run seemed to fall into place this time, I was able to carry good speed and hit all my lines. The final stage went great and I had held it together to finish 3rd. A good way to close the weekend. 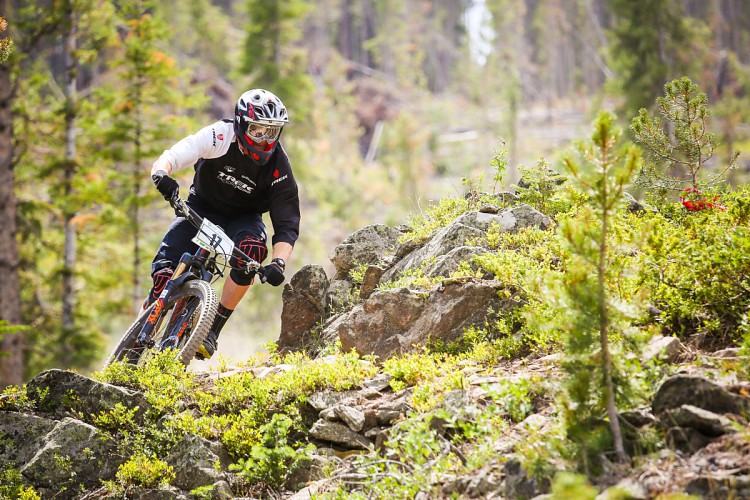 It has been a mixed race for me this weekend, some up and downs for sure but keeping the consistency going with a 5th overall finish has kept me in 3rd in the points series.

A big thanks to my Sponsors/team/coach/ and wife for all the help to get here this weekend. Without all this support I just couldn’t do it!

I now have two days testing with Trek and Fox Racing shocks so come Whistler in 2 weeks we should have some more time out of the bike and suspension. 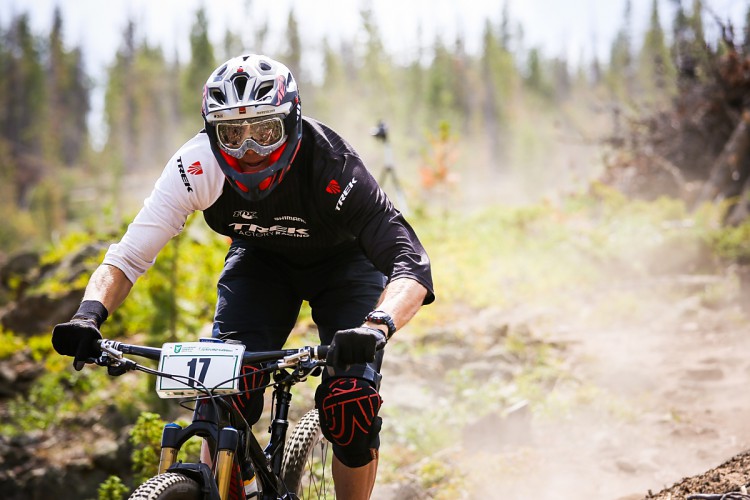 [Video] The art of Flow – tales from the soil with Nico Vink!