When Fox launched their 2021 lineup, which came along with sweeping changes and new models across both front and rear suspension lineups, I was fortunate enough to get ahold of both a coil sprung DHX2 as well as the air sprung Float X2 air shock. Both of these shocks are completely new for 2021 after having gone through a top to bottom redesign. 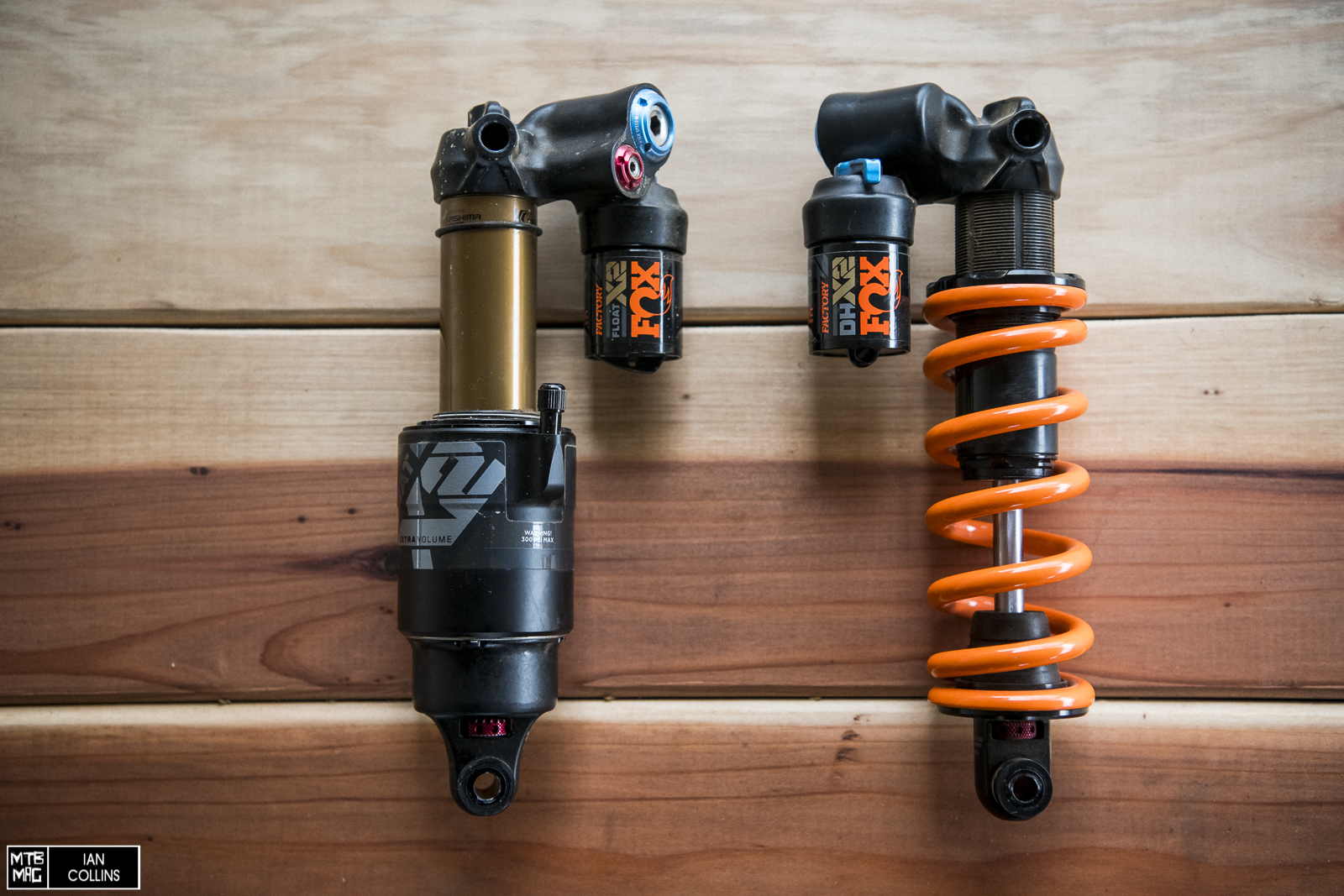 Since it has a ~25% rate of progression, my personal bike – a Transition Sentinel – is designed to work very nicely with both coil and air, and thus it served as the perfect test sled for a comparative review between the two units. Below I’ll run through how the DHX2 and Float X2 worked individually and compared to one another… 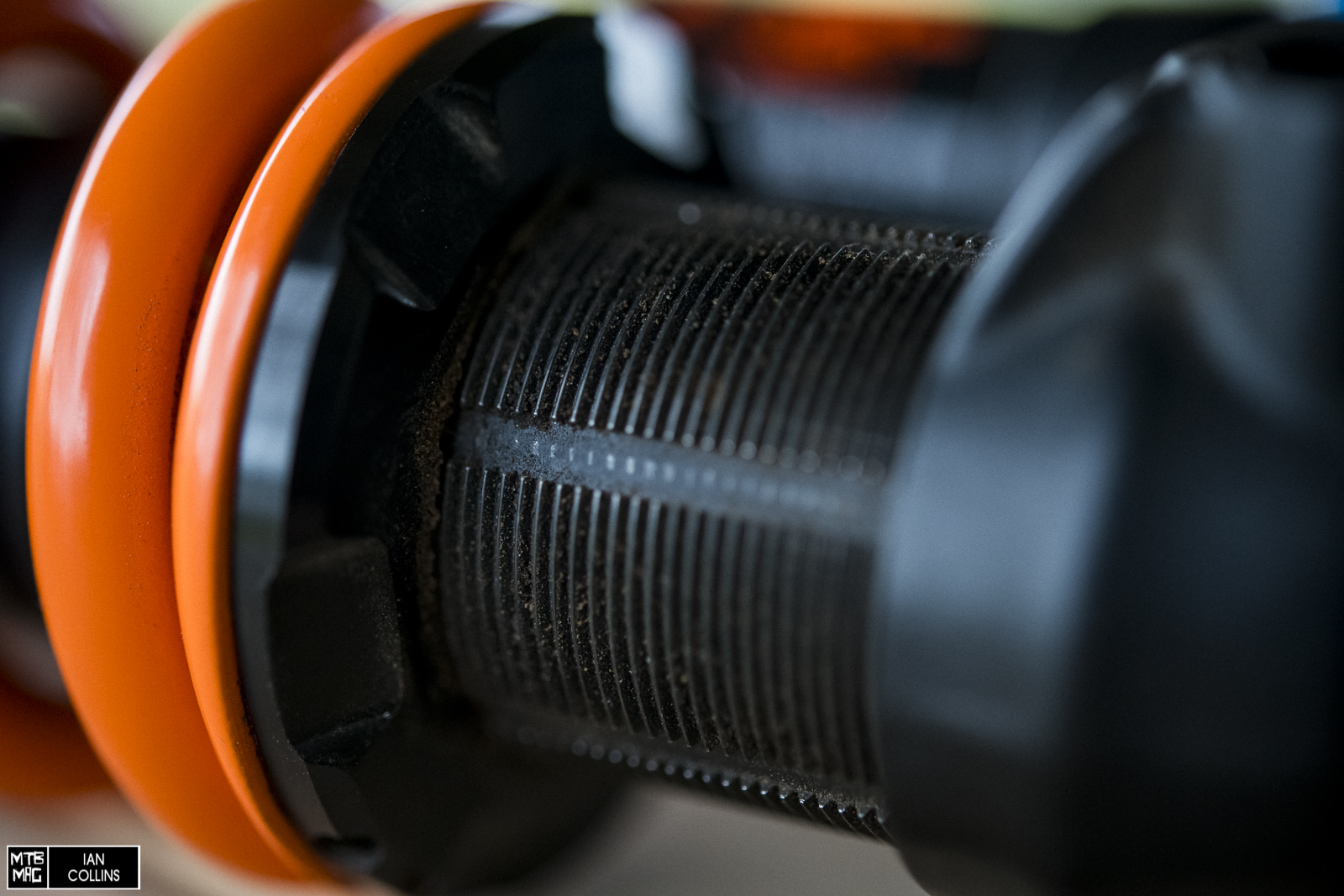 The DHX2’s updated shock body and spring preload collar now feature distinct detents, which not only help keep the collar in place, but also make it easier to keep track of where your preload is set to. 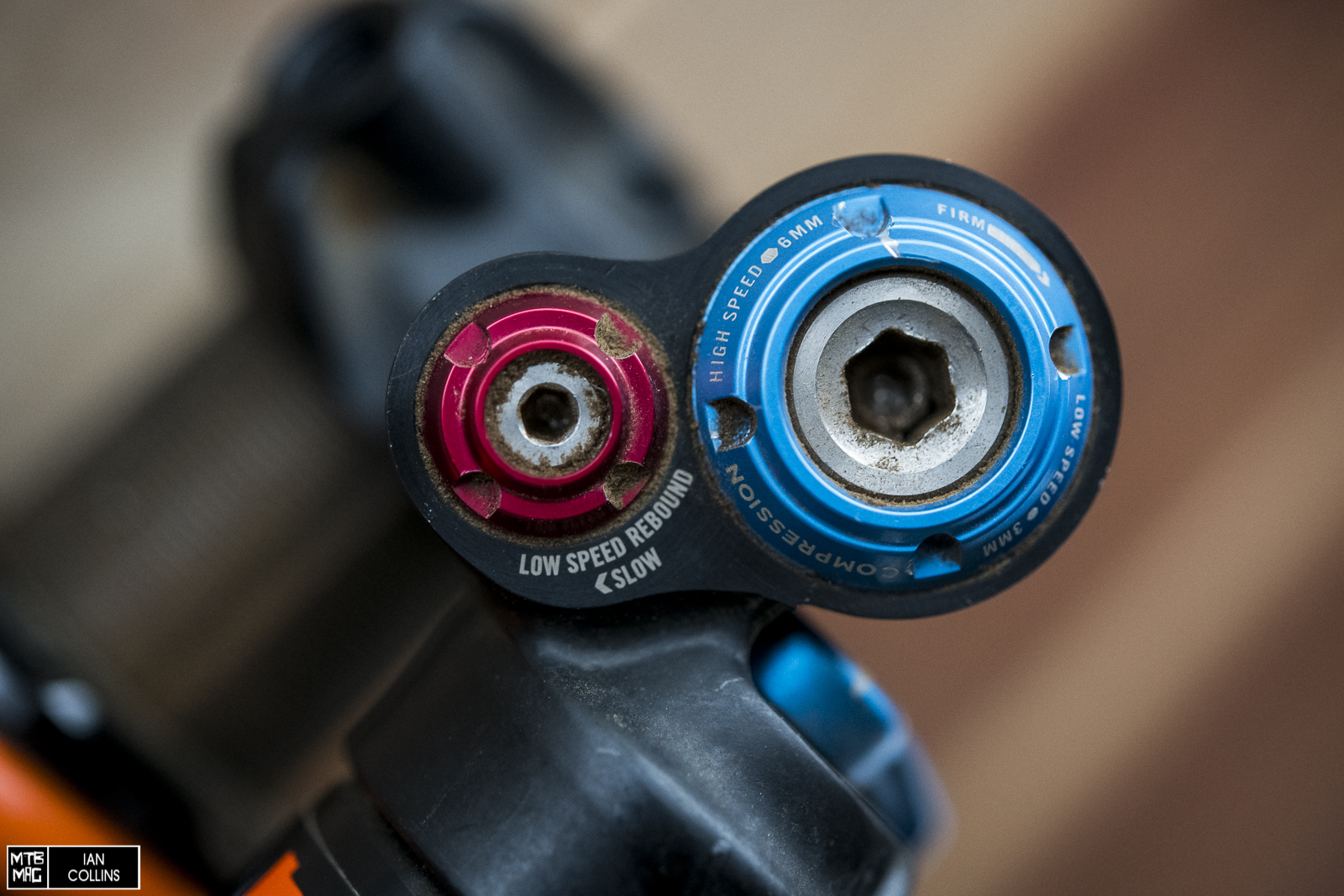 The revamped damping system is totally different with a new high flow piston, but it still has 4-way external damping via 3mm and 6mm allen keys. 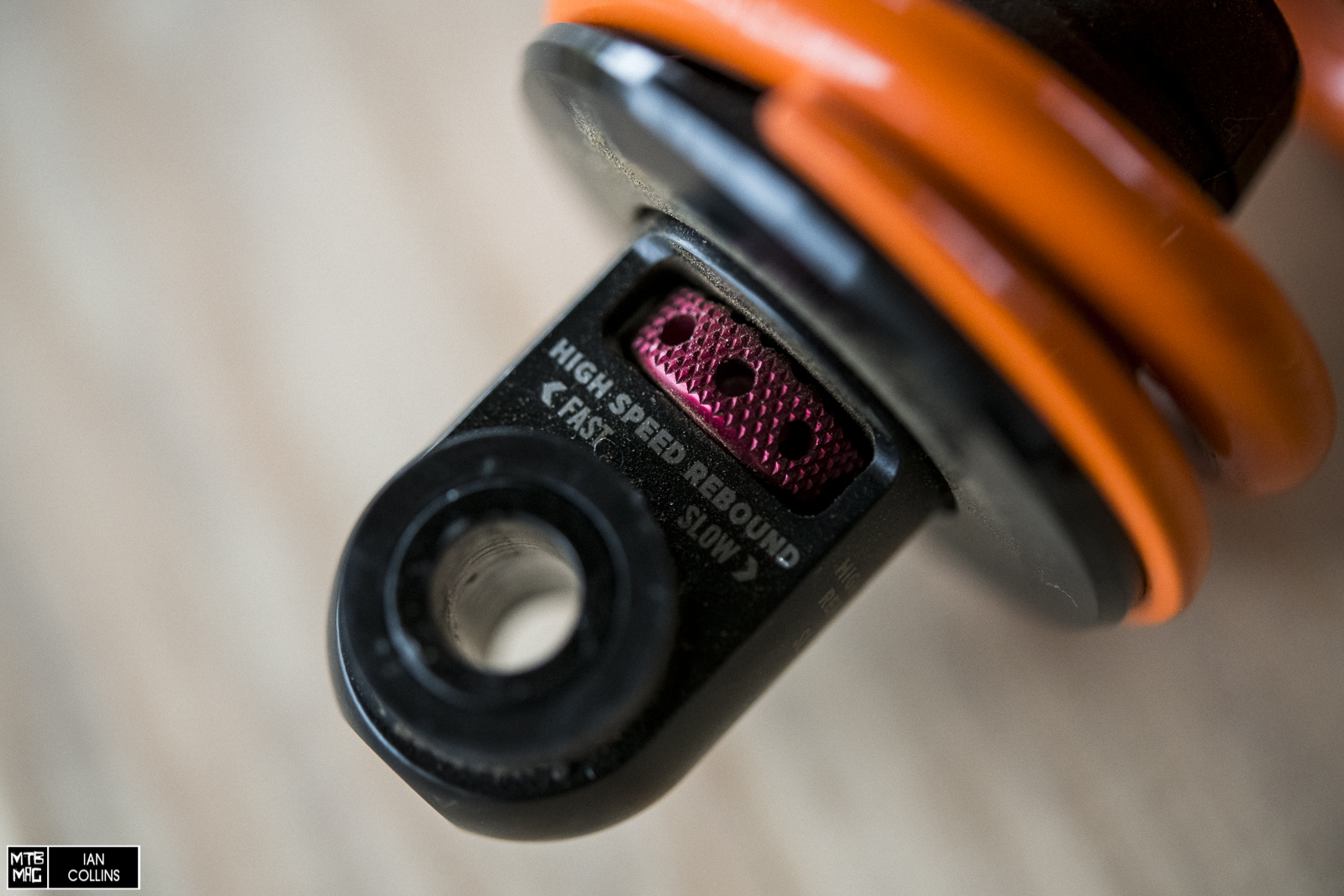 The high speed rebound adjuster is a knurled aluminum dial which, depending on how your bike is designed, can be a little difficult to access. There are a handful of holes zipped into it which you can utilize to make your adjustments via a small allen key. 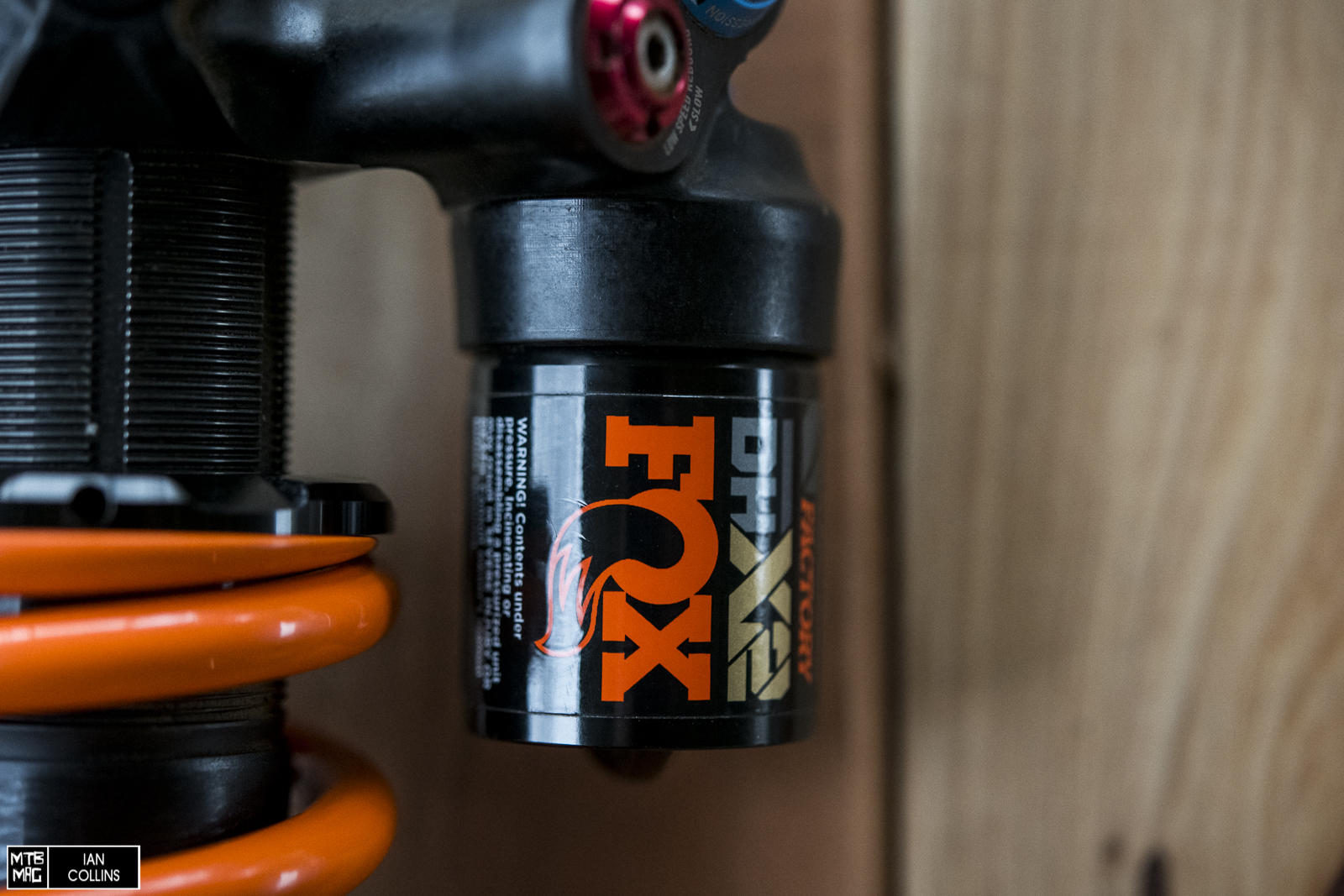 For both coil and air offerings the reservoir takes on a shorter and stouter shape, which helps improve its clearance and broaden its compatibility with a wider range of bikes without sacrificing precious volume. 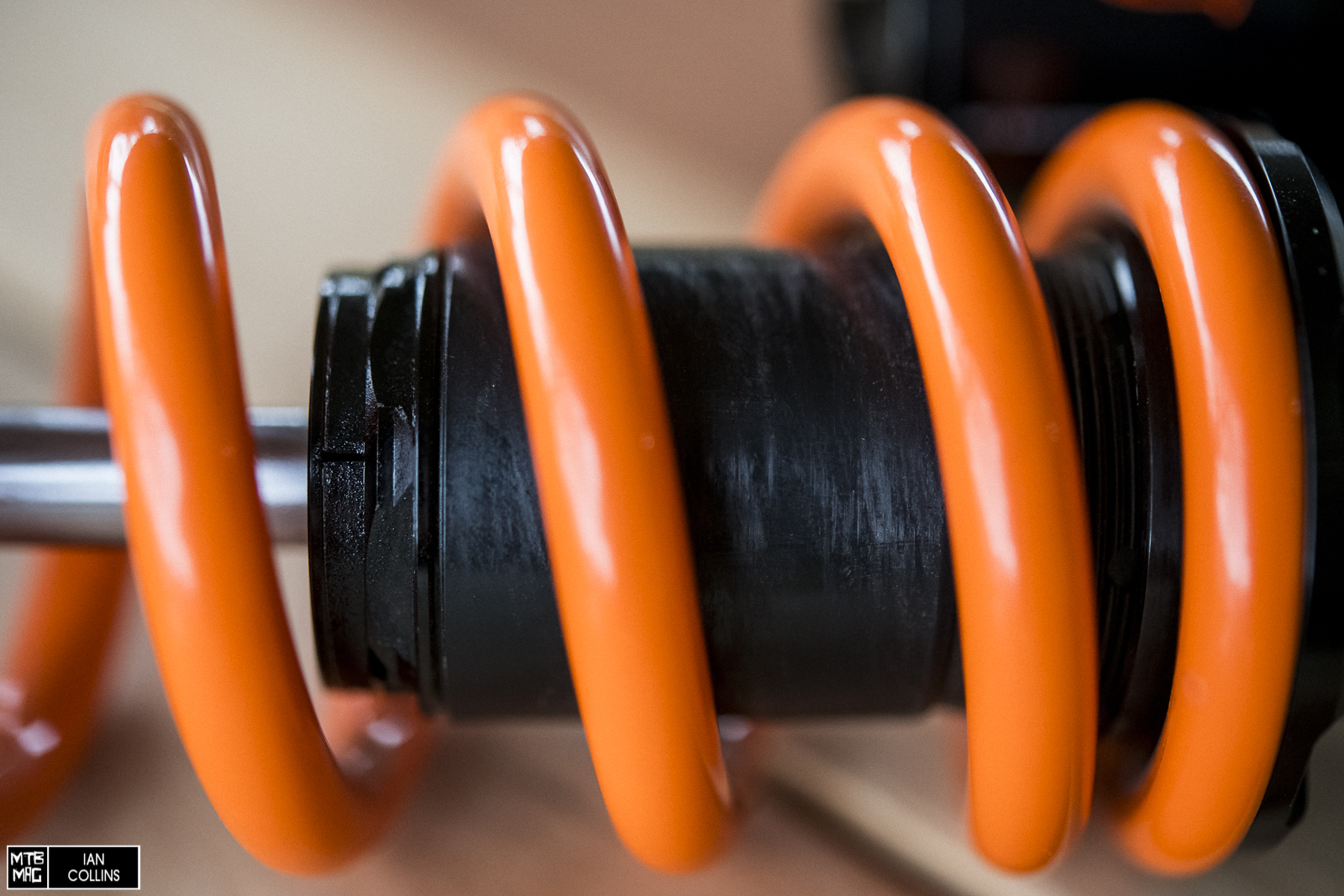 DHX2’s shock body also features a plastic sleeve to cut down on any metal on metal rubbing from the spring, thus helping to keep things quiet. 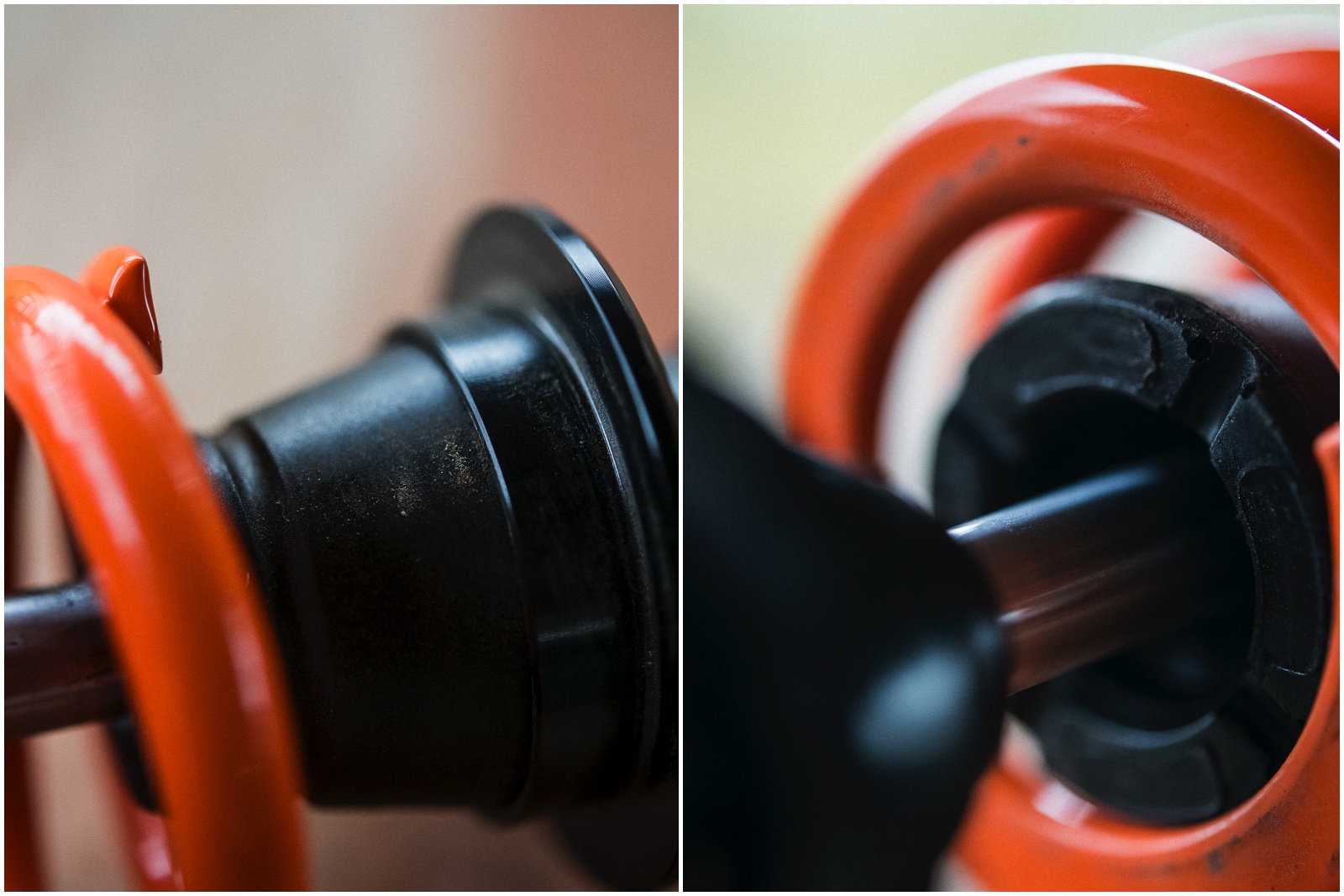 If you were familiar with the old DHX2, its bottom out bumper was so bad that with an update it could only get better. The new MCU bumper is much larger and features a tapered shape that’s encapsulated 360º at its base by the lower spring collar. This prevents it from pancaking out on the harshest bottom outs and gives it a very progressive feel at the end of the stroke. 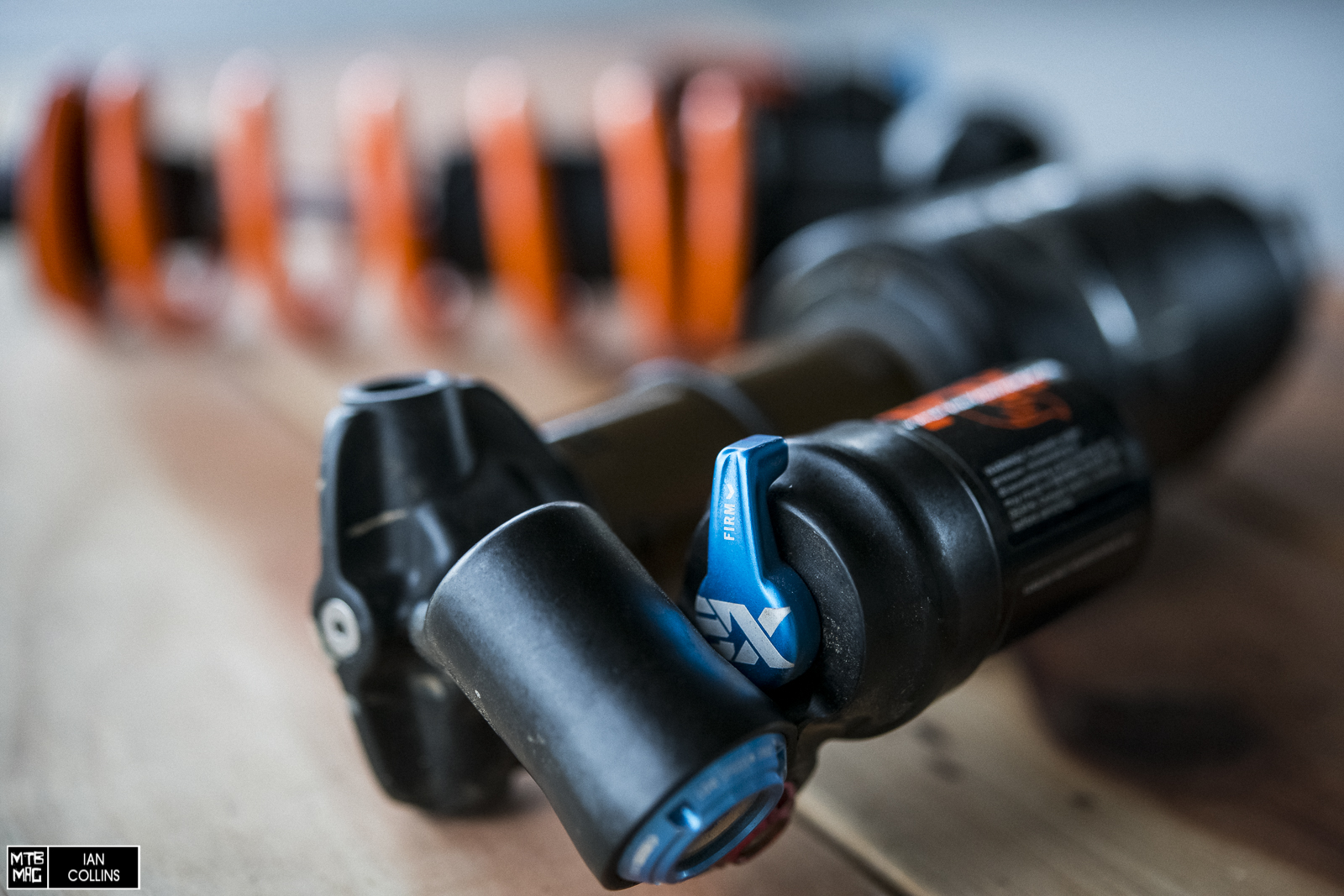 Both shocks feature the 2-position lever, but the ones with longer eye to eye lengths, aimed at downhill bikes, do not include them. The new lever features an independent circuit, which has a firmer lock mode compared to past versions. A 90º flick toggles between the two modes. 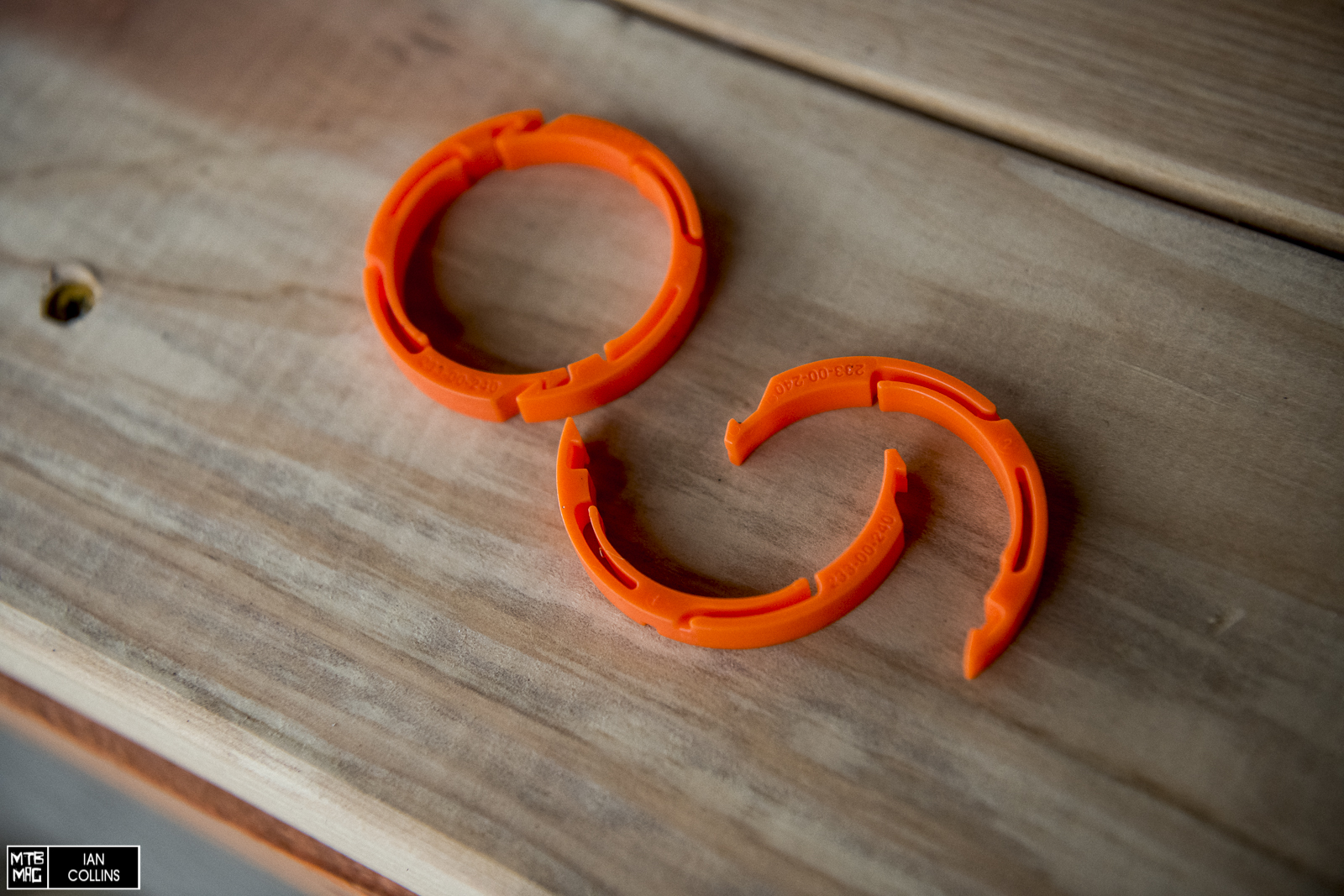 The latest volume reducers in Float X2 are two-piece, which means that in many cases you often won’t need to completely remove the air can from the shock, or even the shock from the bike for that matter, to address fiddling with your air spring curve. If you’re the tuning type or you’re coming off of an older shock with the round rubber band style volume reducers, then this is a bonus. For the model I tested, there was roughly a half pound difference (240 grams) between the two models. Keep in mind, these weights will obviously vary with dimensions and spring ratings.

Over the last few months I’ve gone back and forth between the two units often and on varied terrain, riding everything from bike park laps, big mountain missions and sessions on flowy trails with jumps and features. The damping side is a good starting point since this is essentially where both shocks overlap. On a surface level, much like the shocks we are now discussing, previous iterations of the DHX2 and Float X2 also had a broad range in their damping adjustments, but internally things are now very much improved. My main grievance with the old DHX2/Float X2 was that they both felt a bit dead and uninspiring. And while both new and old units offer good sensitivity and a very light breakaway force, the latter versions failed to impress when it came to building up resistance and support as they cycled through further into their travel. This meant that on the spring side, with the old Float X2, it was often necessary to pack the air can full of volume reducers to compensate for the lack of support. Regarding the old DHX2, it simply wasn’t optimal on most bikes that didn’t have ultra progressive suspension layouts. This is no longer an issue and both of these new shocks find the increased support they needed on the hydraulic side. As a testament to this claim and a nice segue into the next section, I rode this new Float X2 on my not-exactly-freakishly-progressive Sentinel in its most linear form, with precisely zero volume reducers in the air can and I never once felt a violent bottom out. While this affirms that there has been a big improvement on the damping side, it is worth mentioning that both the air and coil shocks have much improved bottom out bumpers, which also help greatly in this arena. On the spring side, since this is a “Factory” level offering, Fox uses their Super Light Steel spring, which isn’t quite as light as titanium but it is substantially lighter than the average steel spring. Another bonus is that it is offered in 25 pound increments, which I firmly believe is underrated in its importance – particularly as I ended up finding the sweet spot at #475. Getting just the right sag is very critical on modern bikes! Anyhow, with the DHX2 on my Sentinel, I was able to get the perfect amount of pop and progression, and thus I never found myself thinking I would be better off with an air shock. The coil offered up GOBS of traction, incredibly sensitivity and amazing consistency even on the longest runs. It was also impressively quiet while doing its job.

As far as the Float X2 was concerned, I started out with one volume reducer and upon finding the ride to be just a hair on the rough side and not once achieving full bottom out, I removed it and found the perfect feel with zero reducers. On a bike with a 25% progression rate that really hits the “coil or air friendly” sweet spot this wasn’t a huge surprise, but knowing how many reducers I typically needed in the old Float X2 this highlighted the difference between old and new. On the air shock I really didn’t notice a great deal of added pop, which is often the case when directly compared with a coil. *However, it is worth noting that I did run a little less low speed compression and more low speed rebound as you’ll find in the notes below. The Float X2’s breakaway force was close to nil as I could activate my suspension with a single finger pushing on the saddle, and thus, its sensitivity was very impressive. Flawless tolerances, high quality materials in the seals and piston glide rings all deserve the tip of a hat here – the Float X2 is an incredibly well built unit. It is worth pointing out that compared to a standard trail duty shock such as Fox’s DPX2 or the RockShox Super Deluxe, you do pay a toll of roughly 100 grams. However that comes along with far greater adjustability and a calmer temperament in the face of the worst types of trails and on the longest descents. As far as features go, the bottom out bumper on the DHX2 is an absolutely massive upgrade. On the most horrendous huck to flat, you no longer get the jarring metal-to-metal feel. Rather it has a nice progressive ramp as the travel kisses the end of its stroke. The same can be said for the Float X2. The lockout lever is located in the same spot and works in the same fashion on both units. On my bike it was slightly tough to reach due to its proximity to my water bottle, but that will vary with each bike. As far as functionality is concerned, it’s a huge upgrade. On the old units the threshold was so low that it was often difficult to tell if it was even engaged, rendering it nearly useless. At present it is far more effective, leaving you with just the right amount of a firm platform to push off of while still giving you a bit of give and traction on slippery technical climbs where you need the wheel to be able to react to the terrain. It’s also worth pointing out that the detents of the damping adjusters, which are identical on both shocks, were quite clear and easy to detect, even with the high speed rebound knob being a bit difficult to access.

Purely for the sake of geeking out, at 180 pounds here is where I landed on each unit:

As far as a comparison between the two units, if you are someone who is torn between the DHX2 and the Float X2, I would say the first factor that you should consider is your personal situation. I do feel that the improvements to both shocks have narrowed the gap and made both of them more broadly applicable to a greater range of bikes and their inherent suspension layouts. But, if you have a linear bike that bottoms out easily such as an older Specialized Stumpjumper, then perhaps you should lean toward the Float X2 as you can get more support from it. If you have a very progressive bike such as the new Specialized Enduro, then the coil shock will be your hot ticket. For me personally, having a bike that landed right in the middle, I think I would have to give the nod to the DHX2. Although the Float X2 is far and away the best performing air shock I’ve used to date, I still don’t quite think that air shocks have totally narrowed the margins on traction. While it is smooth as butter, there is a bit more unavoidable drag as there are naturally more seals to contain the air in the air spring. 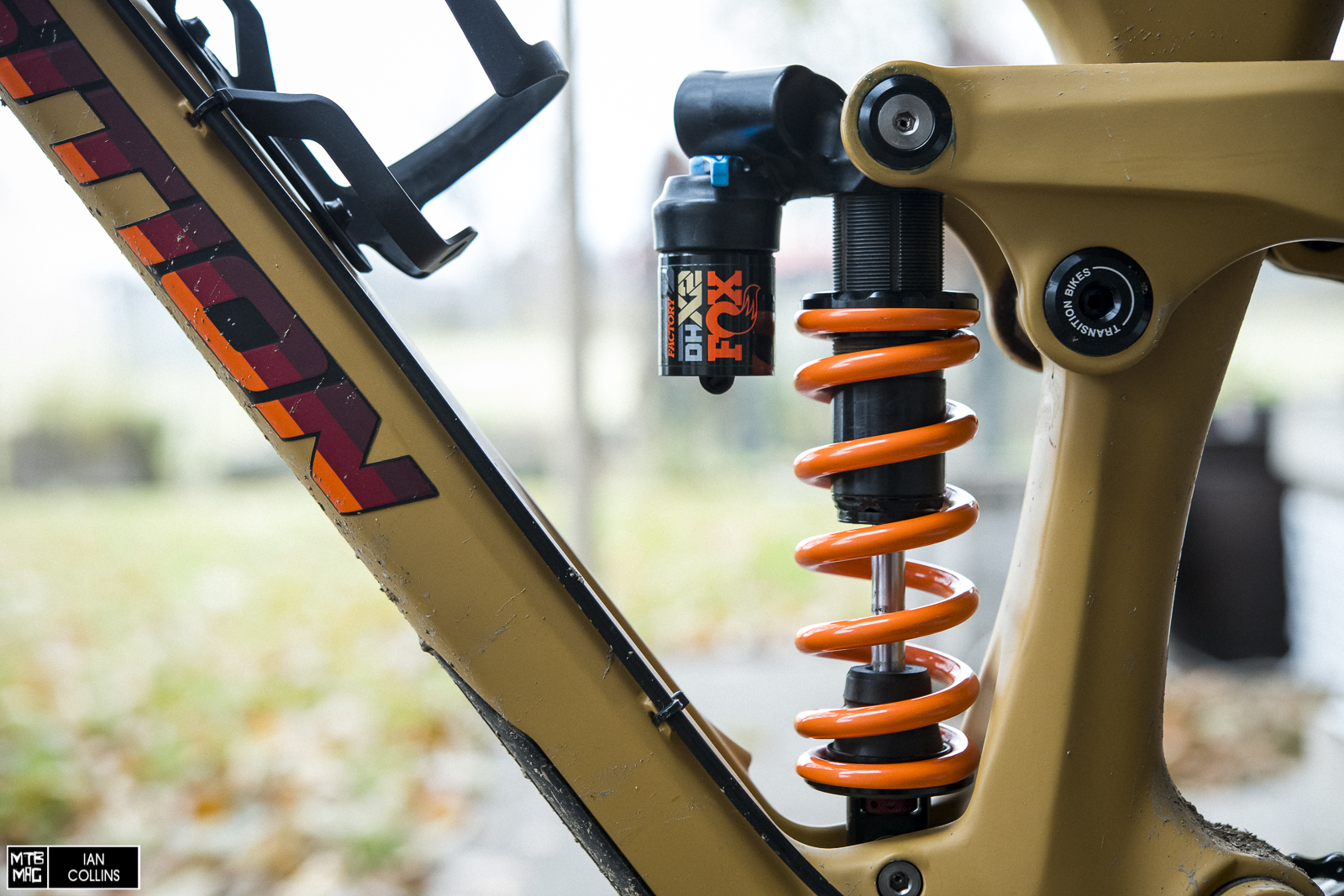 Therefore I feel that I got the absolute best all out performance from the DHX2 as the traction and mid stroke compliance was second to none. That made the ballpark half pound increase in weight simply an afterthought. I’ll leave it on this note – it’s been some time since I’ve tested the absolute cream of the crop Push 11.6 rear shock, and while it has seen a revision since then, the DHX2 just about closes the gap in terms of performance, while doing so at half the price. Overall, you really can’t go wrong with either shock, and depending on your bike’s suspension, one unit may be more optimal than the other, but on most bikes it is the DHX2 that will be utterly transformative to your ride.

[Video] How To No Hander Any Bike