Approximately one and a half years ago, Giant got back to the Italian market opening a new headquarter near Varese, a direct branch of the Taiwan based company. After some years, they wanted to regain a strong position in Italy. Giant is climbing up the sales chart thanks to a good commercial strategy, but are their products so convincing as well? Our Italian tester Francesco spent some time on the Giant Reign Advanced 1 recently…here’s how it treated him.

We chose to test the cheapest carbon model of Giant, the Advanced 1, which comes at a really interesting price considering the specs. Our tester is usually between the M and L size, but since Reign sizes for this model are pretty long, this time we chose the M one. The test involved various alpine trails and an intensive riding of the Finale Ligure Enduro trails, special thanks goes to the shuttle service of Ride on Noli and the Deutsche Familien Hotel. The front triangle of the Reign Advanced is made of carbon. Giant produces all the various carbon fibers that are used to build their frames in the same factory in Taiwan, as well as many frames for other brands. For the Reign Advanced they used the T-700 fiber which is Giant’s top notch MTB fiber, only the T-800 and T-1000 are of higher quality and are applied to the best BDC bikes by the Taiwanese company. The building concept aims at rigidity and solidity rather than light weight, in fact the Reign, with all the specs, weights 13.6 Kg. It is not one of the lightest bikes carbon Enduro on the market, but the rigidity is excellent and the weight is really well-balanced.

Geometry reveals the racing side and the aggressive downhill nature of the Reign, having a 65° head angle and a particularly long wheelbase: the M size is 1,191 mm. The chainstay is also fairly long, 434 mm in order to stabilize the bike. The bottom bracket offset is not indicated but we measured it at only 342 mm. The steerer tube is really short, thanks to the OverDrive technology which features oversized bearings and a tapered steerer tube, the torsional stiffness is enhanced despite its short height. Regarding geometry, the only arguable thing is the somewhat slack seat angle resulting in a rearward seat position even when adjusting it as forward as possible.

The Reign Advanced chainstay is made of AluxX SL aluminum alloy and it is connected to the main triangle through Giant’s patented Maestro suspension system. Suspension behavior is really interesting: sufficiently stable while pedaling even with the shock open, sensitive to small bumps and quite progressive, it conveys a really plush feeling. The travel is all well used so that bottom outs are not so rare but never harsh. Under braking force the suspension stays active so as not to throw off the rider’s weight and balance. 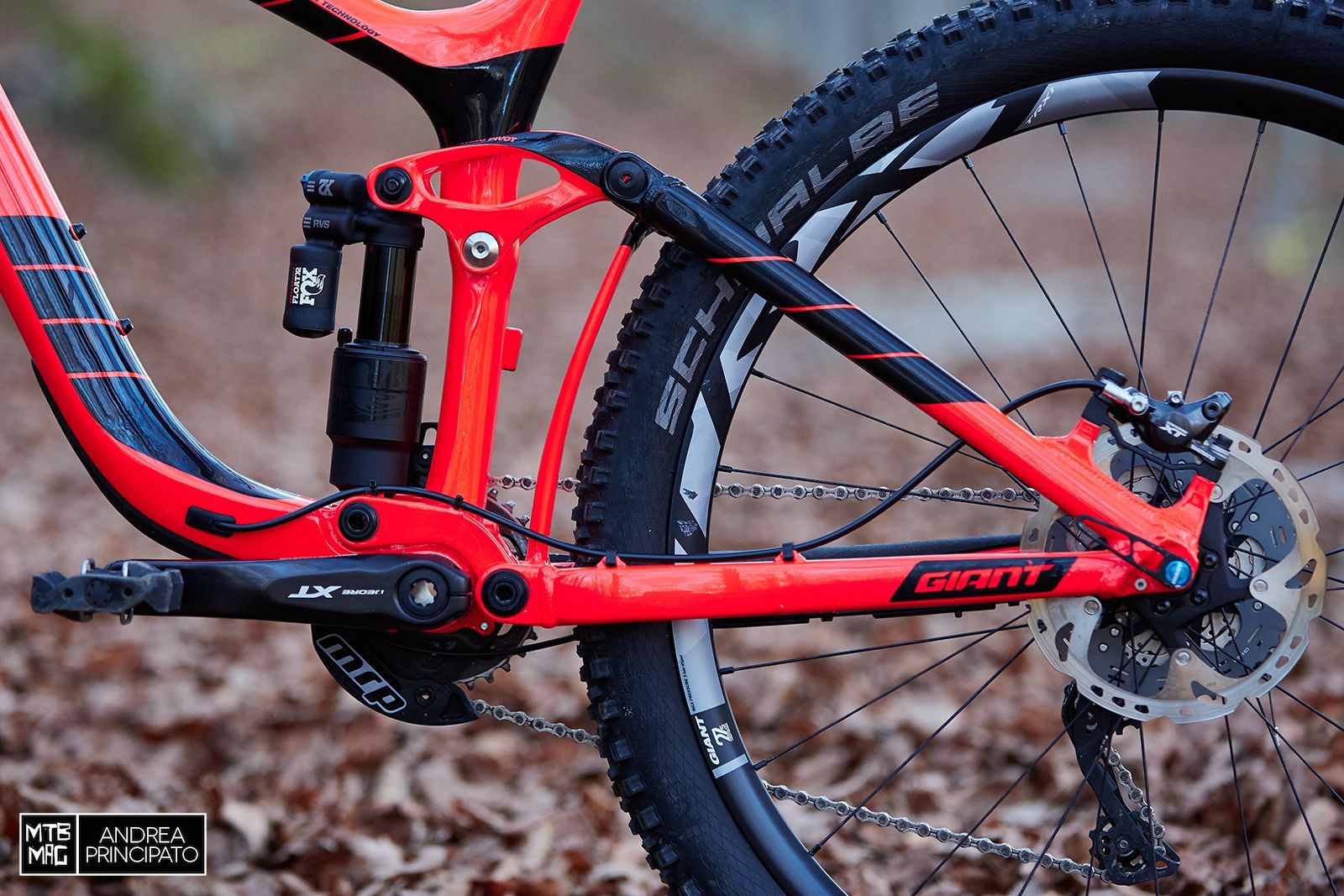 On the Giant Reign Advanced 1 we find a Performance FOX Float X2 shock to manage the 160mm wheel travel. The shaft is black, lacking the factory Kashima coat. Adjustments can be carried out only on low speed compression and rebound with high speed damping pre set from the factory. There’s a useful lever to select the Open or Firm position, the latter doesn’t lock completely and increases Maestro System’s stability at the same time, leaving it free to soak up hits and vibrations while pedaling off-road. 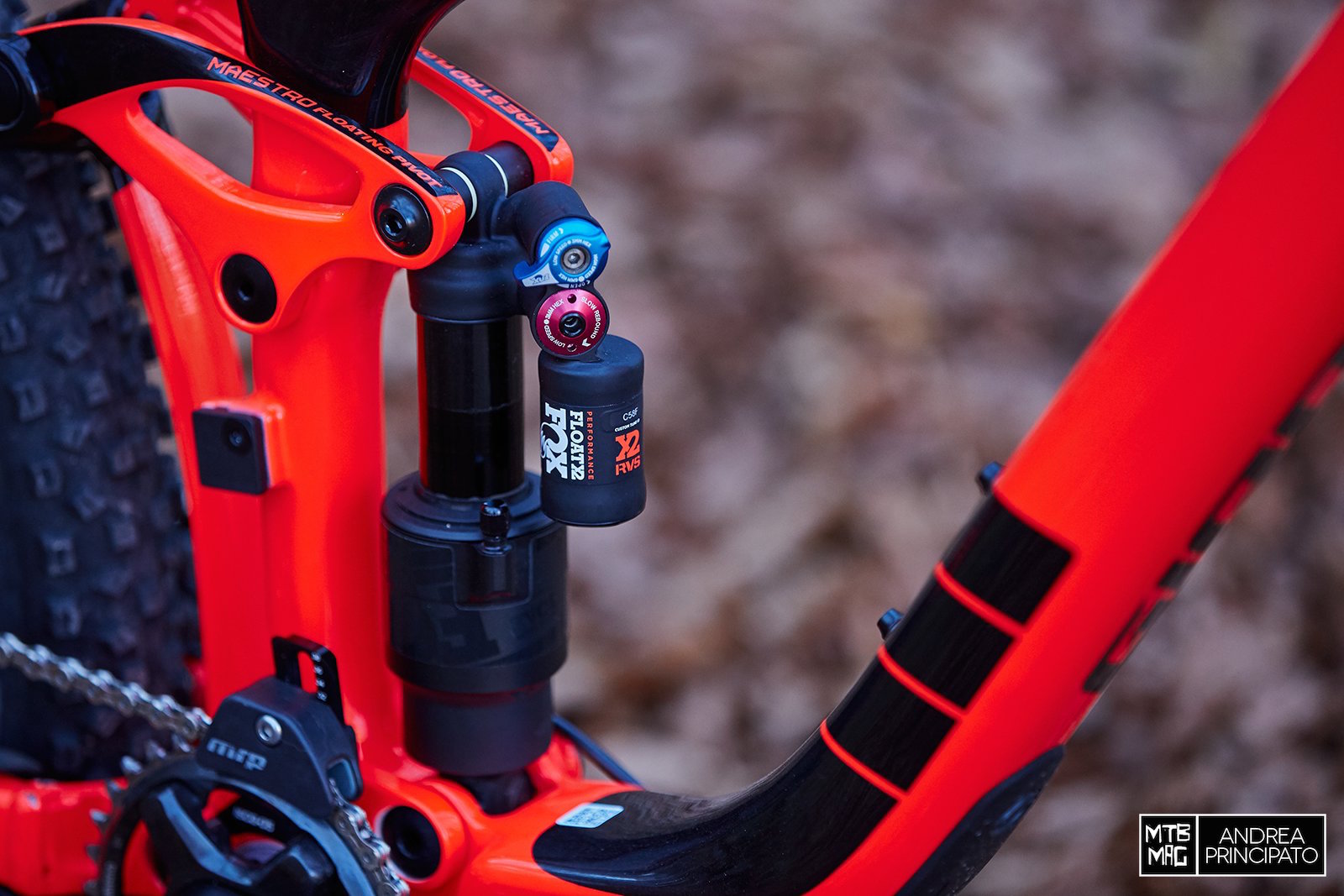 The fork is a 160mm FOX 36 Float Performance Elite. It has the same black anodized finishing as the shock and a FiT4 cartridge with 3 positions, Open, Medium and Firm, plus low speed compression as well as rebound adjustment. The fork is Boost with a solid axle (no quick release) so a 6mm hex-key is needed to remove the wheel. Even though the “Performance” is not top shelf version, the 36 works really well and is in line with the solid performance of the shock.

The transmission is a Shimano XT 1×11 drivetrain with 32 chainring and 11-46 cassette, a perfect range for the target use. For those who want to install a double chainring, the frame is equipped with a fromt derailleur Direct Mount. The bike is supplied with a MRP AMG V2 chain guide with a compact upper guide and a robust skid plate, which protects the chain and chainring from damage. 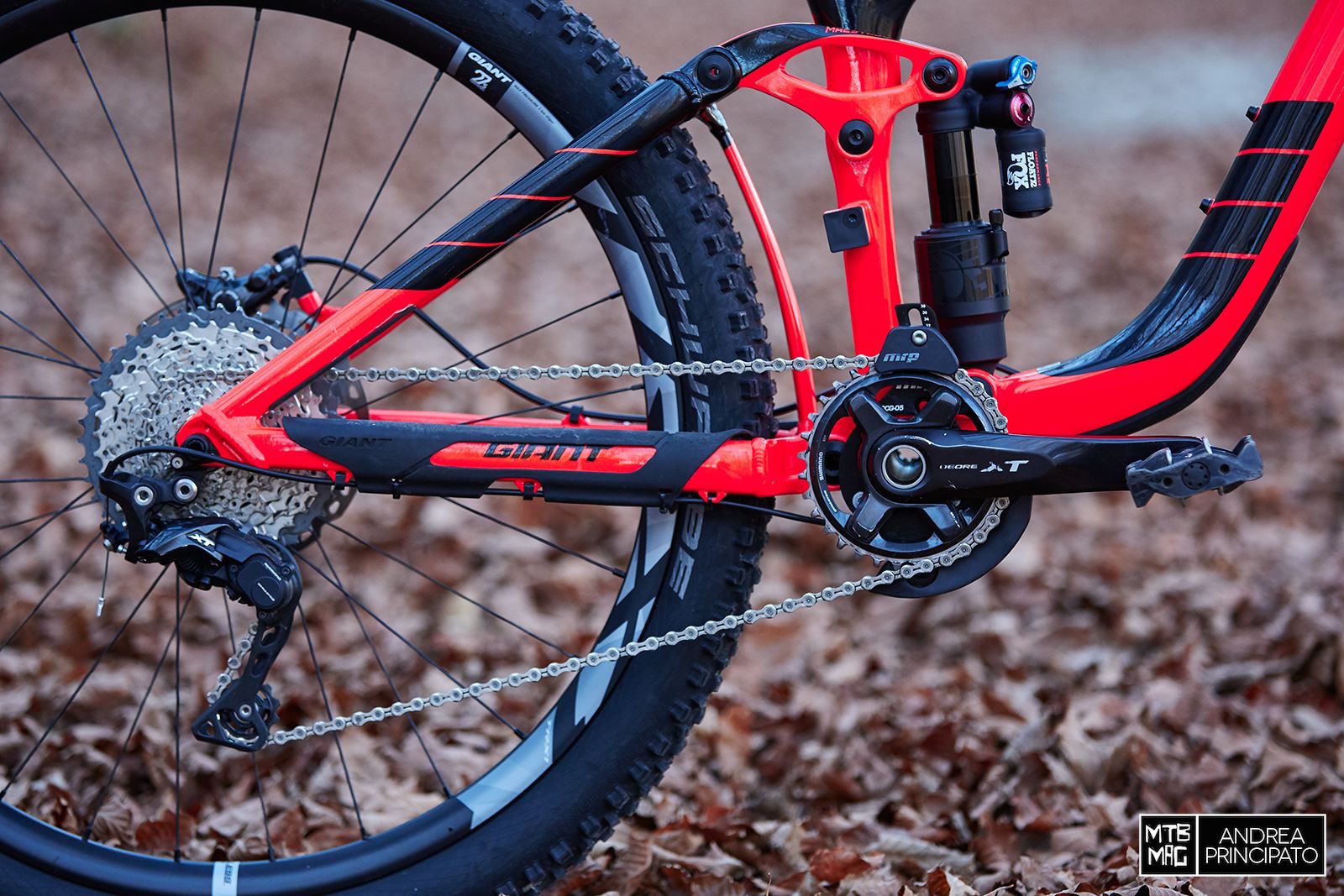 Also the brakes are Shimano XT series: Ice Tech 200mm discs for the front and 180mm for the rear wheel. After the first trails (thanks to Oddone Bici at Finale Ligure for the assistance) we actually needed to bleed the front brake, but then everything worked well during the remainder of the test. Reign Advanced 1 wheels are made of carbon and are produced by Giant themselves. The TRX 1 27.5 Composite model features 27mm wide rims and 28 two cross Sapim Race spokes laced on each wheel. Also the hubs are from Giant, the rear one is 12×142 while the front is Boost 15×110. These are really interesting wheels: light, smooth, with nice lateral stiffness and comfort at the same time. The tires are from Schwalbe, a Magic Mary 2.35 TrailStar at the front and a Hans Dampf 2.35 PaceStar at the back, both in the Snakeskin version. The bike ships with tubes, but since both rims and tires are Tubeless ready, it is possible to remove them thus dropping some weight. 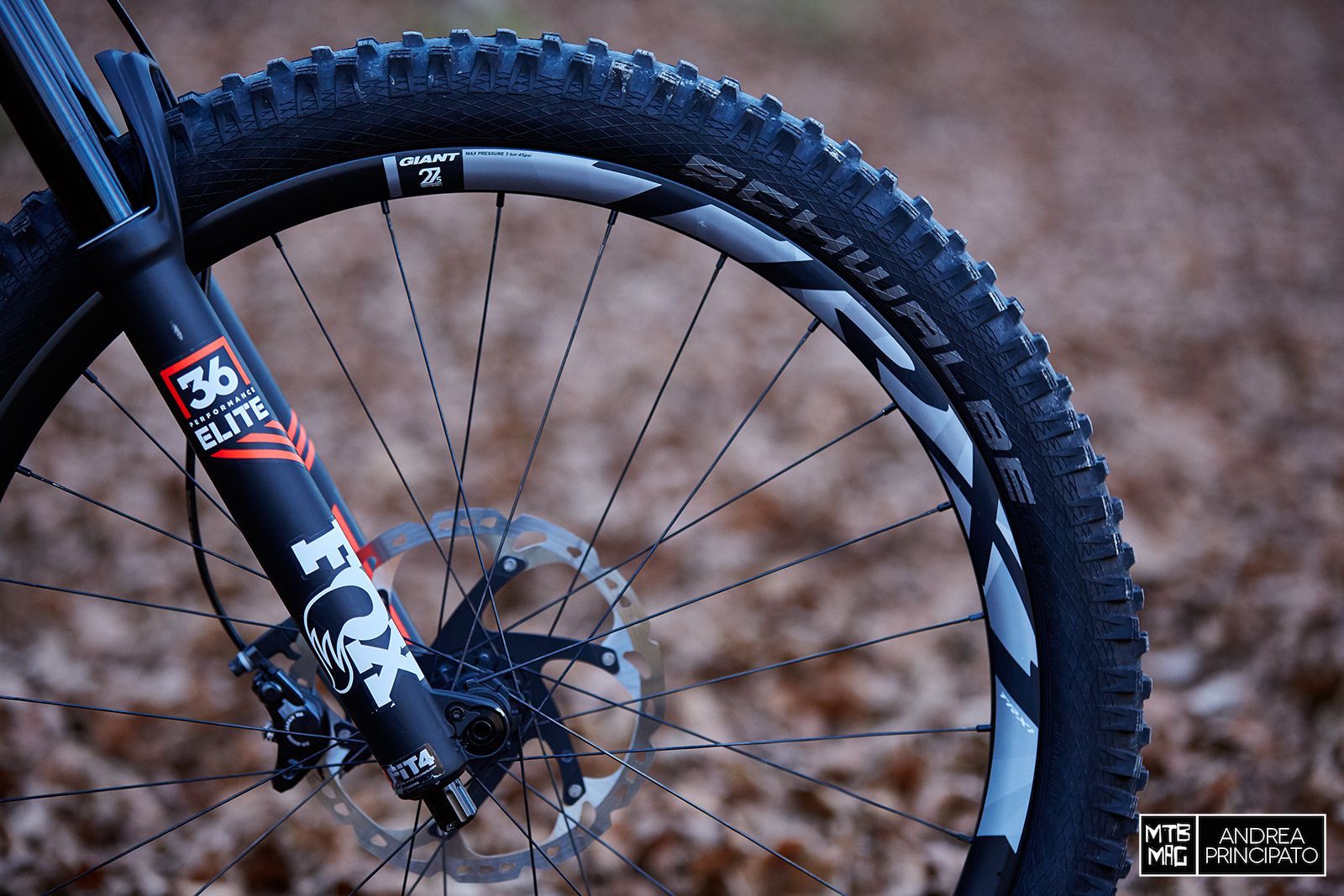 The Contact SL Switch Trail dropper seatpost is also directly manufactured by Giant. For M and L sizes the travel is 125mm, while for the S size it is 100mm and 150mm for the XL. Honestly, we would have preferred a 150mm travel also for the M and L size in order to avoid interferences with the seat during the ride due to the slack seat angle. During the very first ride we had some issues with the provided seatpost, but Giant Italy sent us a new identical one which worked perfectly during the whole test and we are very satisfied with its return speed and smoothness. 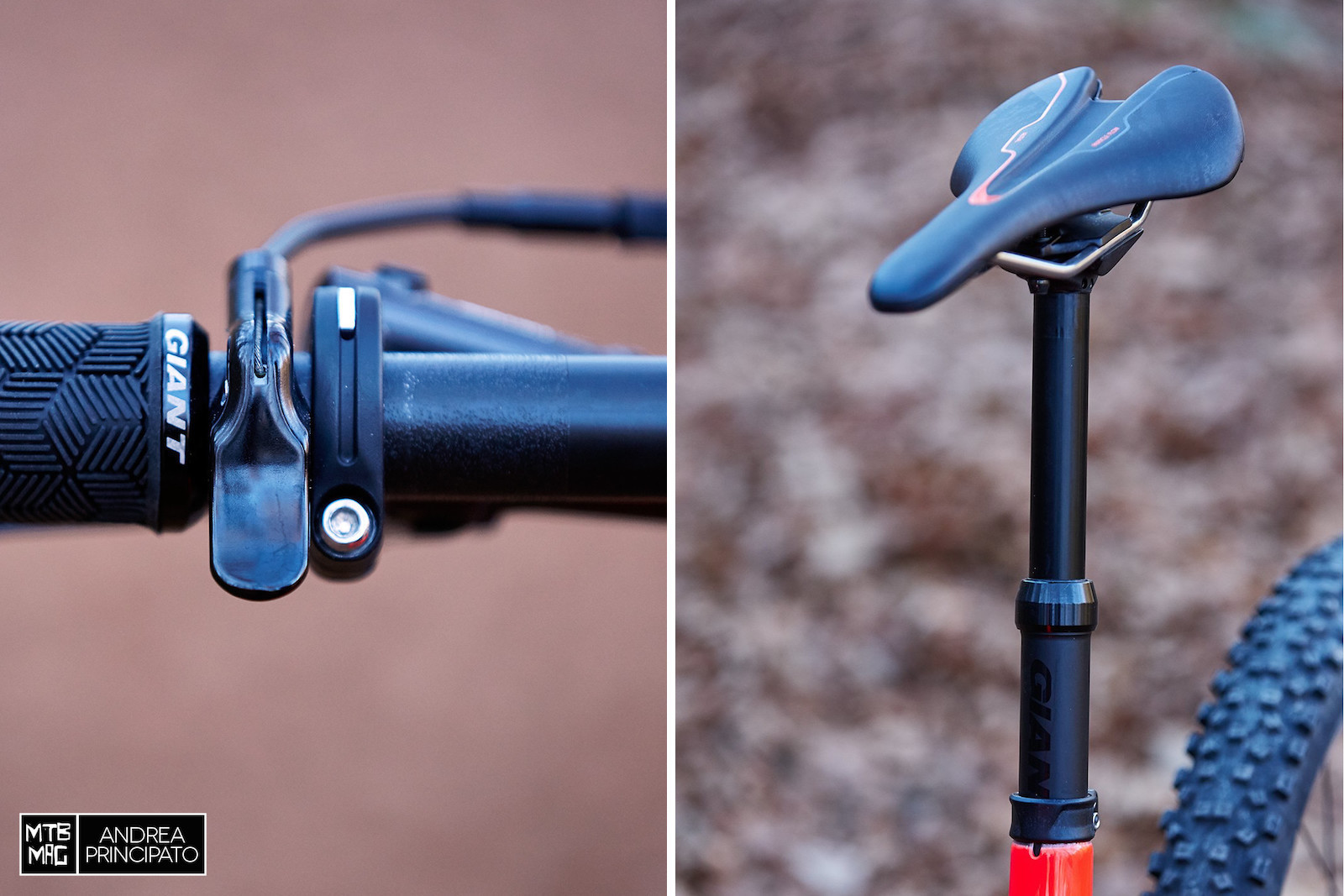 The handlebar is a Giant Contact SLR DH Composite, made of carbon, a full 800m wide and with a 20mm rise. This handlebar was meant for the Advanced 0 model, while our test bike is normally equipped with the Contact SL DH, the aluminum version with identical numbers. The stem is a 50mm Truvativ Holzfeller for M and L sizes, 40mm for S size and 60mm for XL size. It’s nice to see the stem sizes appropriately scaled for frame size. 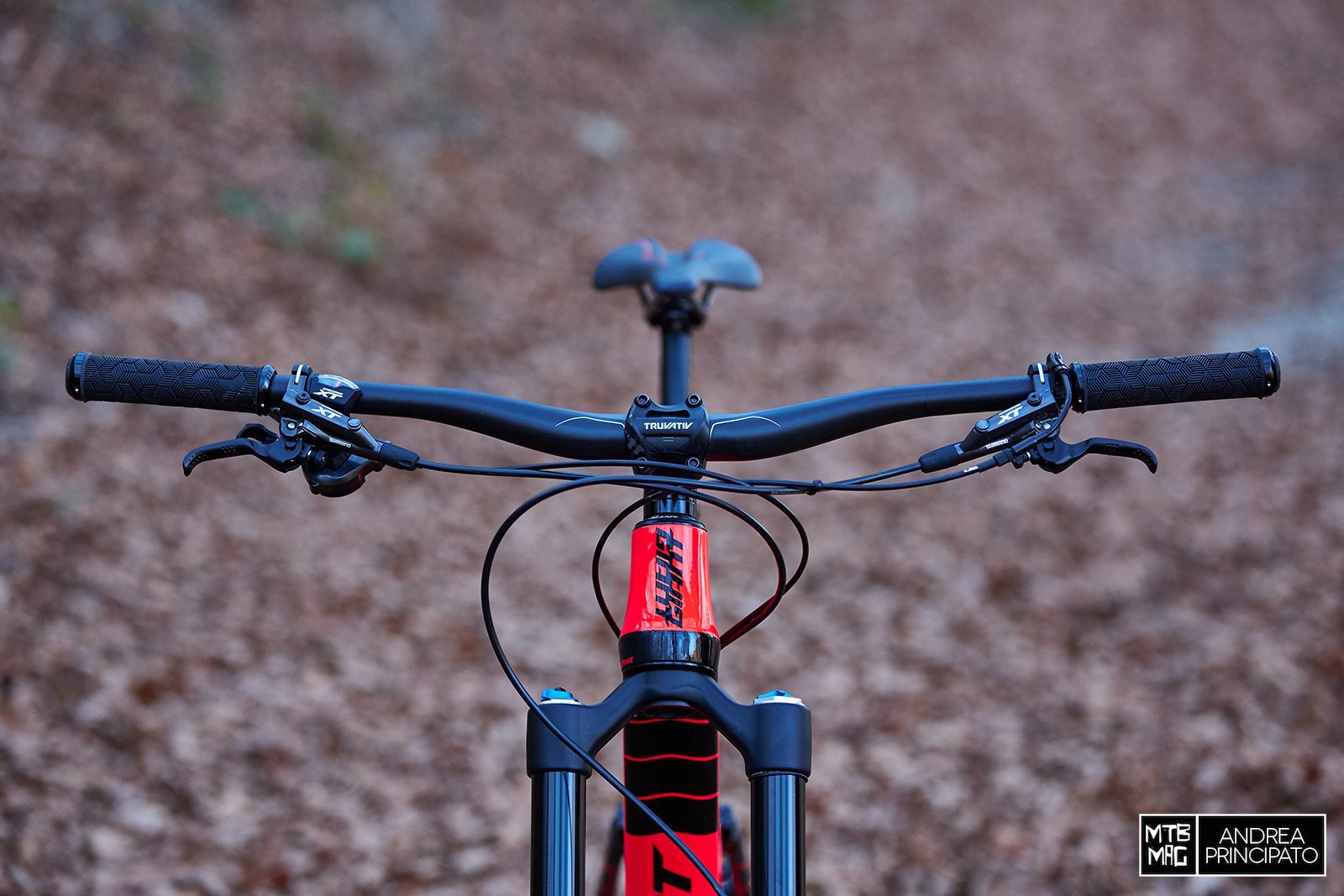 The cable routing is internal in the main triangle and external on the chainstay. In the first box below you can see the front brake and shifter cables going inside the frame on one side. The same does the dropper seat remote cable on the opposite side. In the second box you see the brake cable coming out and heading on to the chainstay. The water bottle cage mount is also noticeable, a not so common feature on Enduro bikes. In the third box is the massive rubber protection on the lower end of the down tube, from which the shifter cable comes out. It then goes along the chainstay, as shown in the fourth box, fixed to therubber chainstay guard with zip ties. 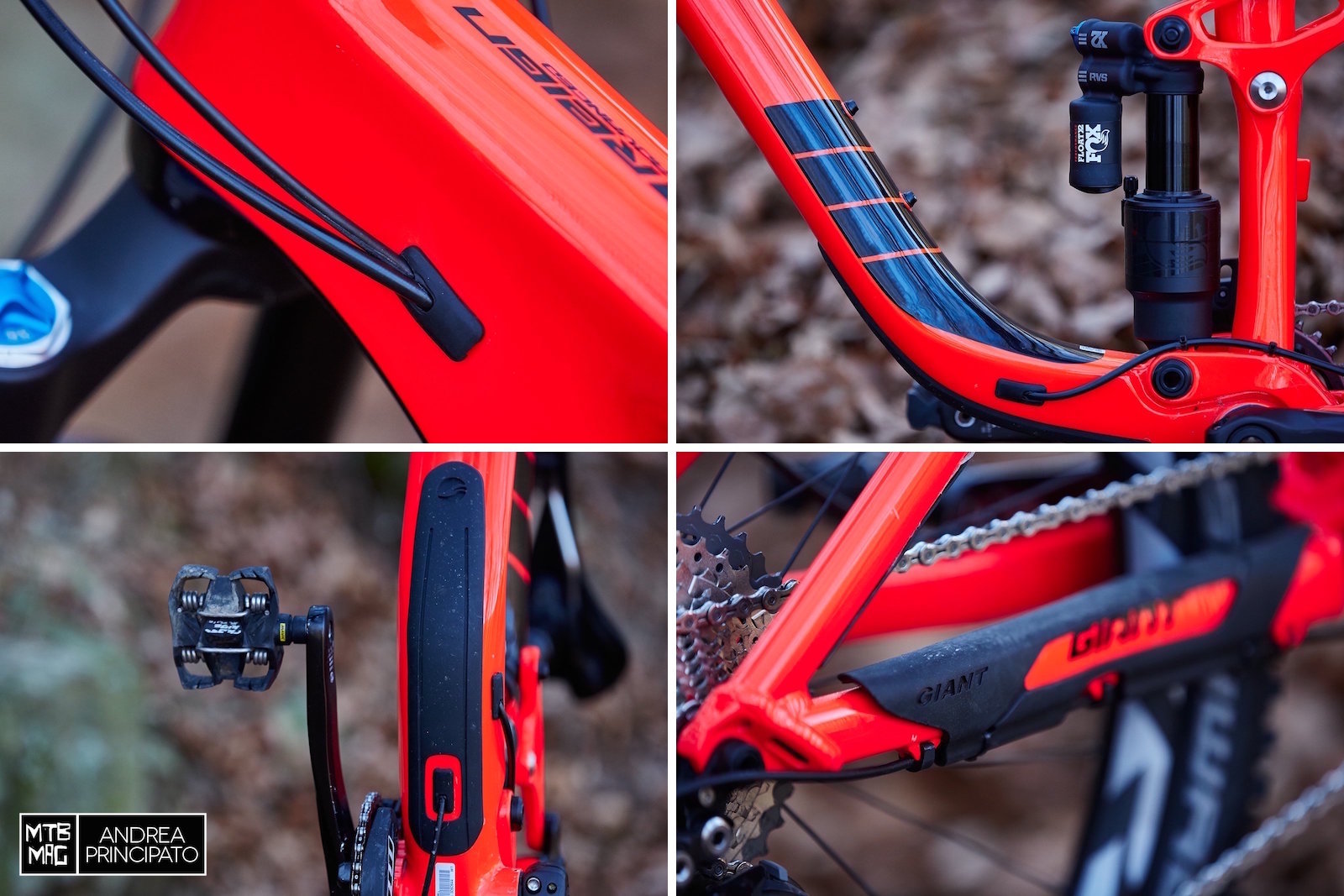 Testing an Enduro bike with such an aggressive geometry, one can’t help but expect the climbing to be a necessary evil to reach the what you’re really after: the descent. But not so much this time. The Reign Advanced breaks the rules and performs really well even going uphill.

The seat position is stretched out and allows full control of the front wheel also on really steep climbs, despite the 65° head angle. As already said, the seat angle is really slack, so, in order to have an ideal pedaling position in relation to the bottom bracket, we had to move the seat as forward as possible. In fact, if it was possible, we’d have moved it 2 cm more.

The Maestro System implemented on the Reign is stable on its own thanks to the neutral anti-squat figures. With the X2 Float lever in Firm position you can have further suspension stability on fast climbs and technical sections where, taking advantage of the fork in Firm position, you can always have perfect grip and traction without the bike wallowing. Since pedaling is never too tiring even on technical sections, long and steep climbs are quite enjoyable with the Reign Advanced. Despite the aggressive downhill geometry, this bike can manage quite well on the climbs as well. 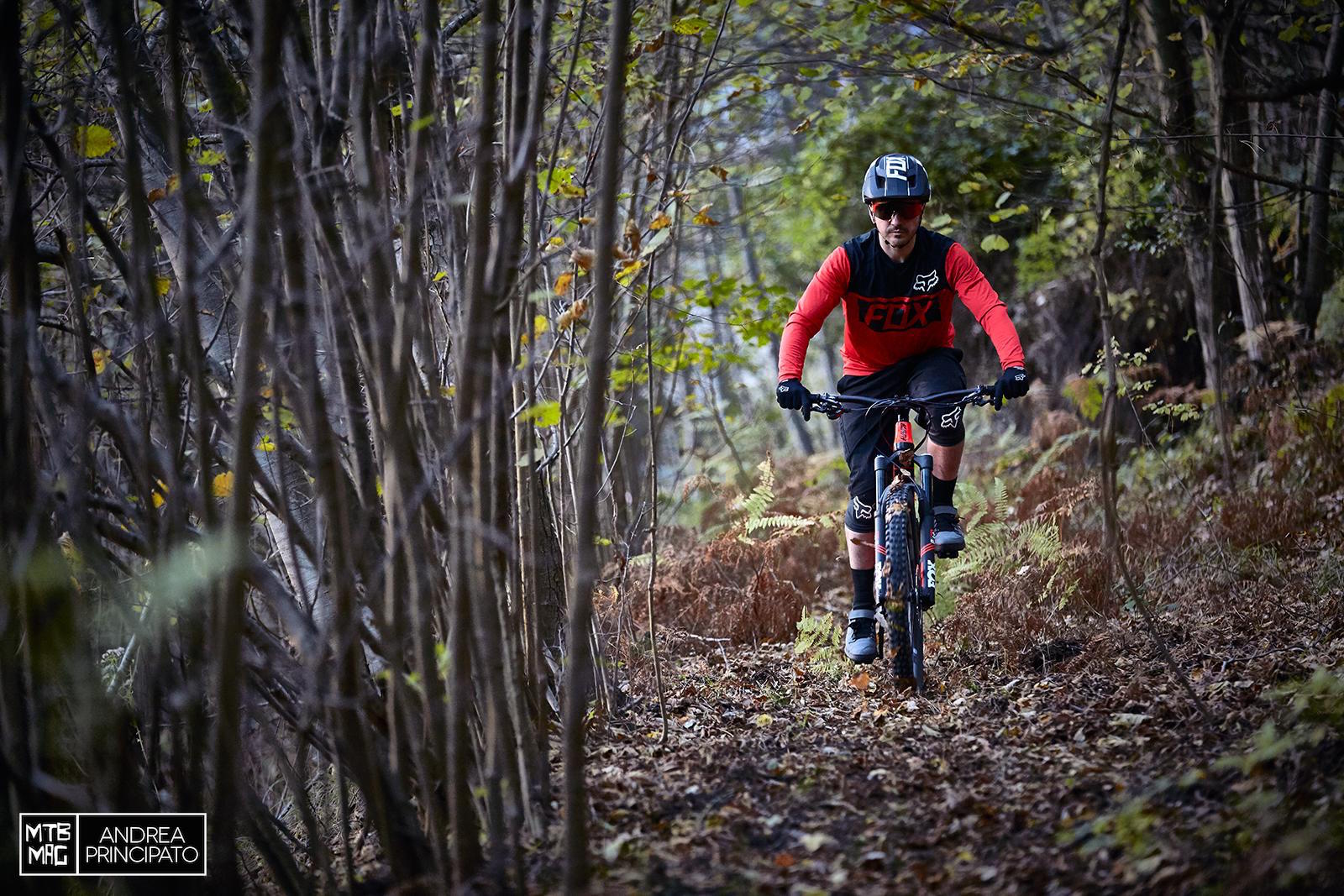 The real spirit of the Reign flat out, pure downhill fun. Thanks to the perfect riding position and geometry, the bike is extremely smooth and flows nicely. Precision in the turns and easy handling really help you to find the fastest lines, also thanks to the excellent stability. It’s easy to load your weight on the wide and aggressive handlebar which has 5° of both backsweep and upsweep, providing lots of grip and control over the front wheel for an active style of riding. The 65° head angle and the stiff fork keep the front tire firmly planted on the ground, so much that sometimes the rear wheel tends to slide when oversteering, but it does so gently so that a slight adjustment to position is enough to get the grip back immediately. Changing direction is fast and simple thanks to the low and balanced centre of gravity, this allows late braking and encourages you to ride more dynamically and smoothly. 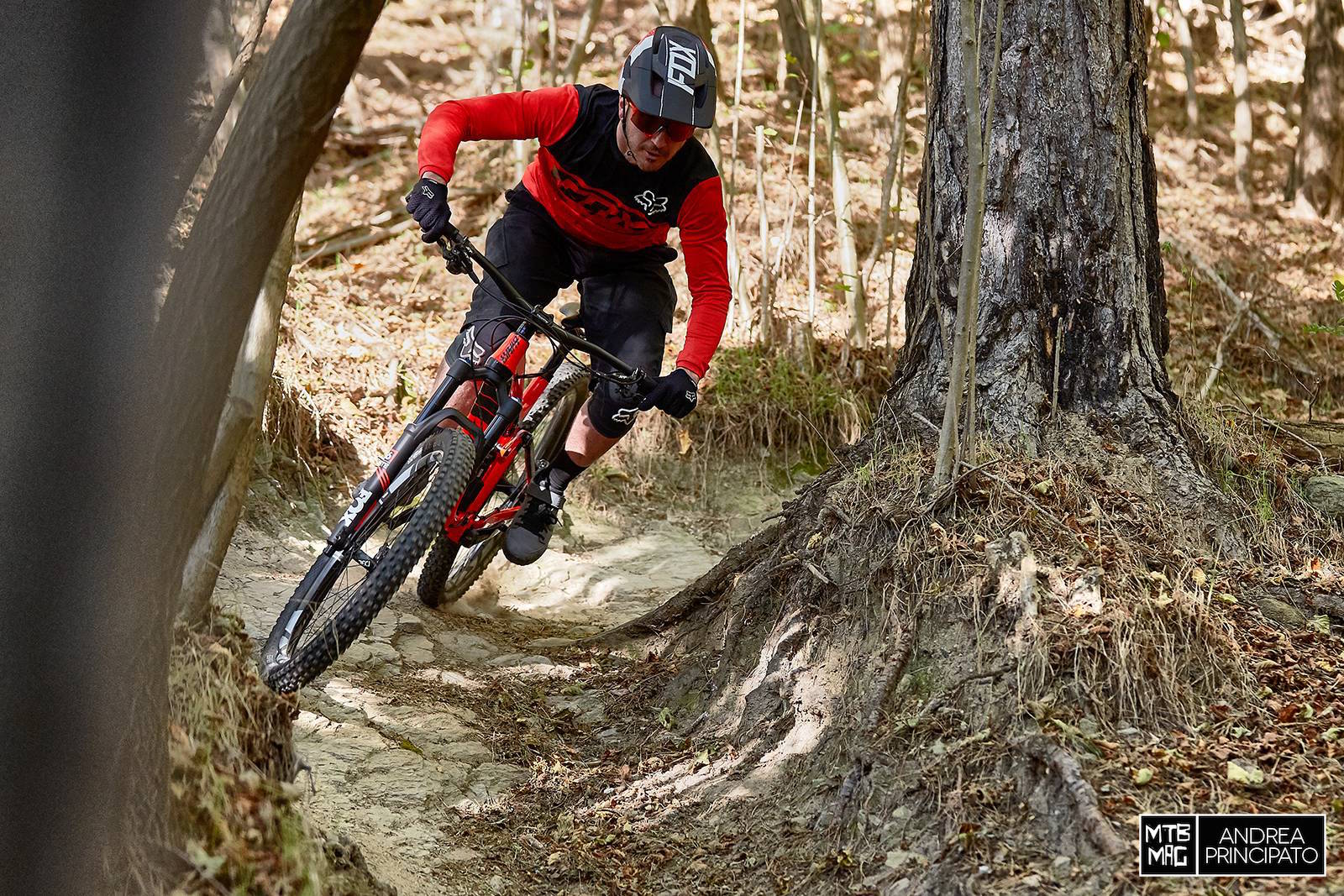 At the same time, while you can weight the front without needing to shift back, thanks to the stiff suspension which works even under full braking force and does throw off the balance of the bike, in the most technical sections you can still ride aggressively. In these cases though, leaning backwards on the most steep and bumpy sections, the slack seat angle causes some problems since the seat, even when completely lowered, interferes between the legs. This can be annoying especially on those days with more intense riding, for example when shuttles are available. A big plus of the Reign is the Maestro’s smooth and balanced management of the 160mm suspension travel. The slightly progressive compression curve is well calibrated throughout the whole range and allows use of all of the travel consistently. The suspension works gently, it is never nervous or tiring but always responsive to a dynamic style of riding. The rear wheel sticks well to the ground and the stiff chainstays paired with the lively carbon wheels make the rear end as precise and stable as the front end. The Reign Advanced is an Enduro race bike, but thanks to its agility and maneuverability, you can also enjoy riding with friends in a bit more relaxed way. However it is really hard not to ride it full throttle: the more you push it, the more fun it gets. The lines are nice but we wish the seat angle was just a bit steeper; the suspension system works really well and the specs are perfectly suited to a race bike. 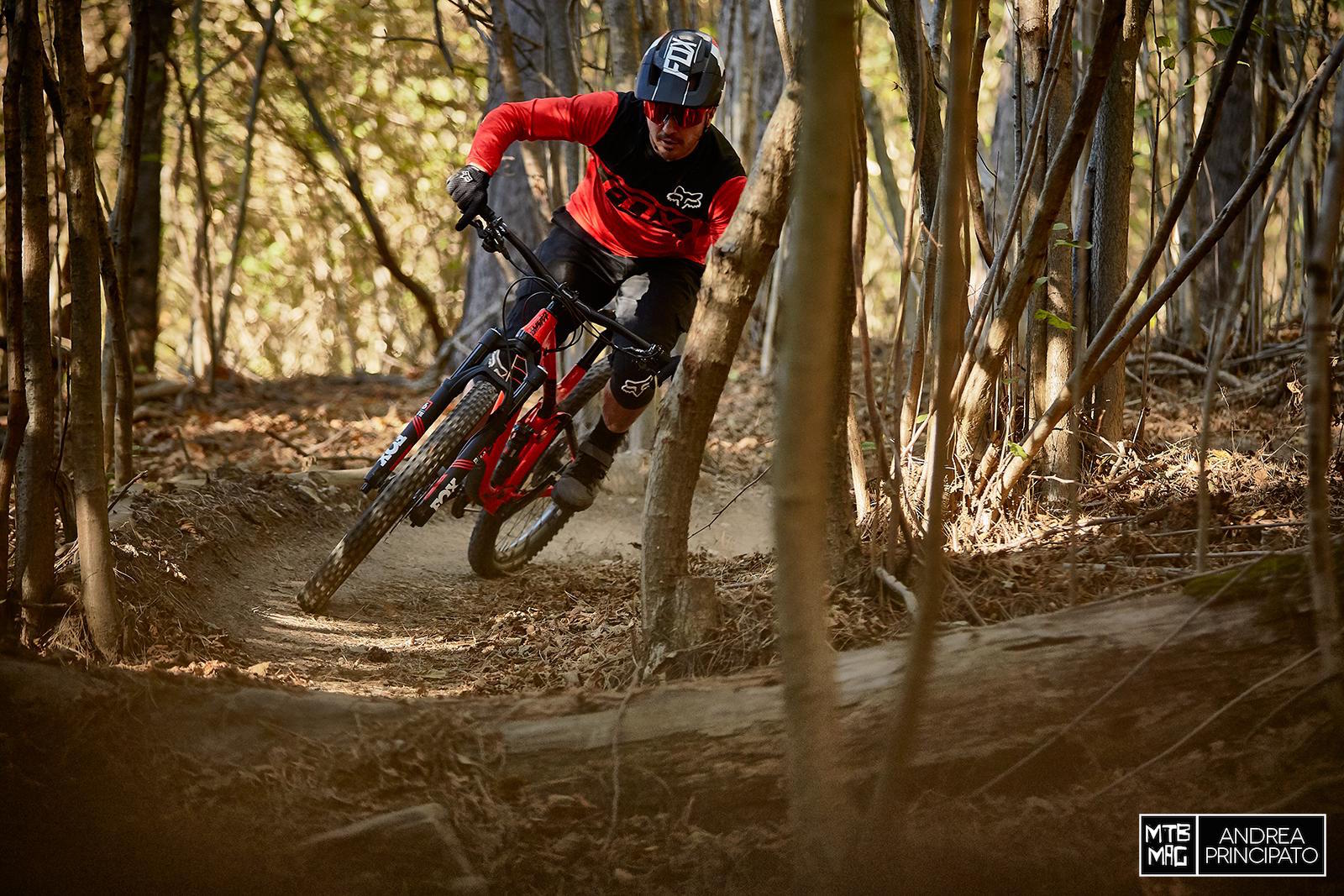 [Video] Polygon Escapes: Team UR on Vacation in Bali