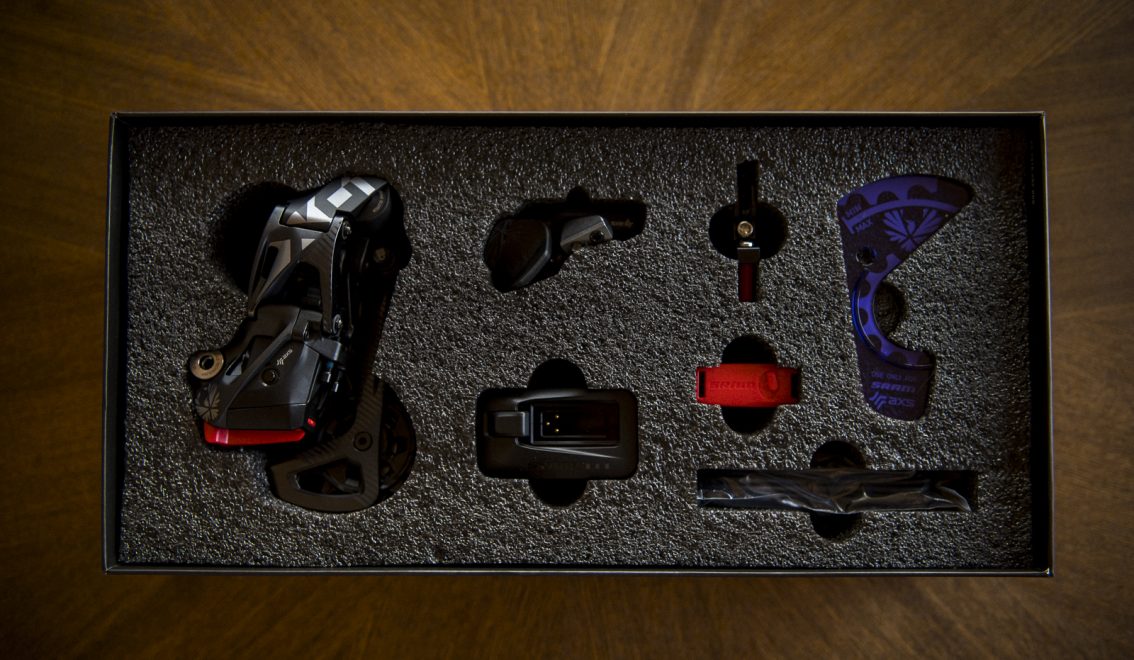 When SRAM’s groundbreaking Eagle AXS wireless shifting system first arrived to market, it did so in the form of complete drivetrain packages and thus a rather steep price tag was attached. The advanced nature of the new componentry brought some inherent added costs, but being packaged as complete groups, parts such as flagship cranks and cassettes made the full kits an even more lofty upgrade. Enter the Eagle AXS upgrade kit…In the case tested here, an XO1 version with an “Enduro” focus compared to its “XC/trail” focused XX1 counterpart. 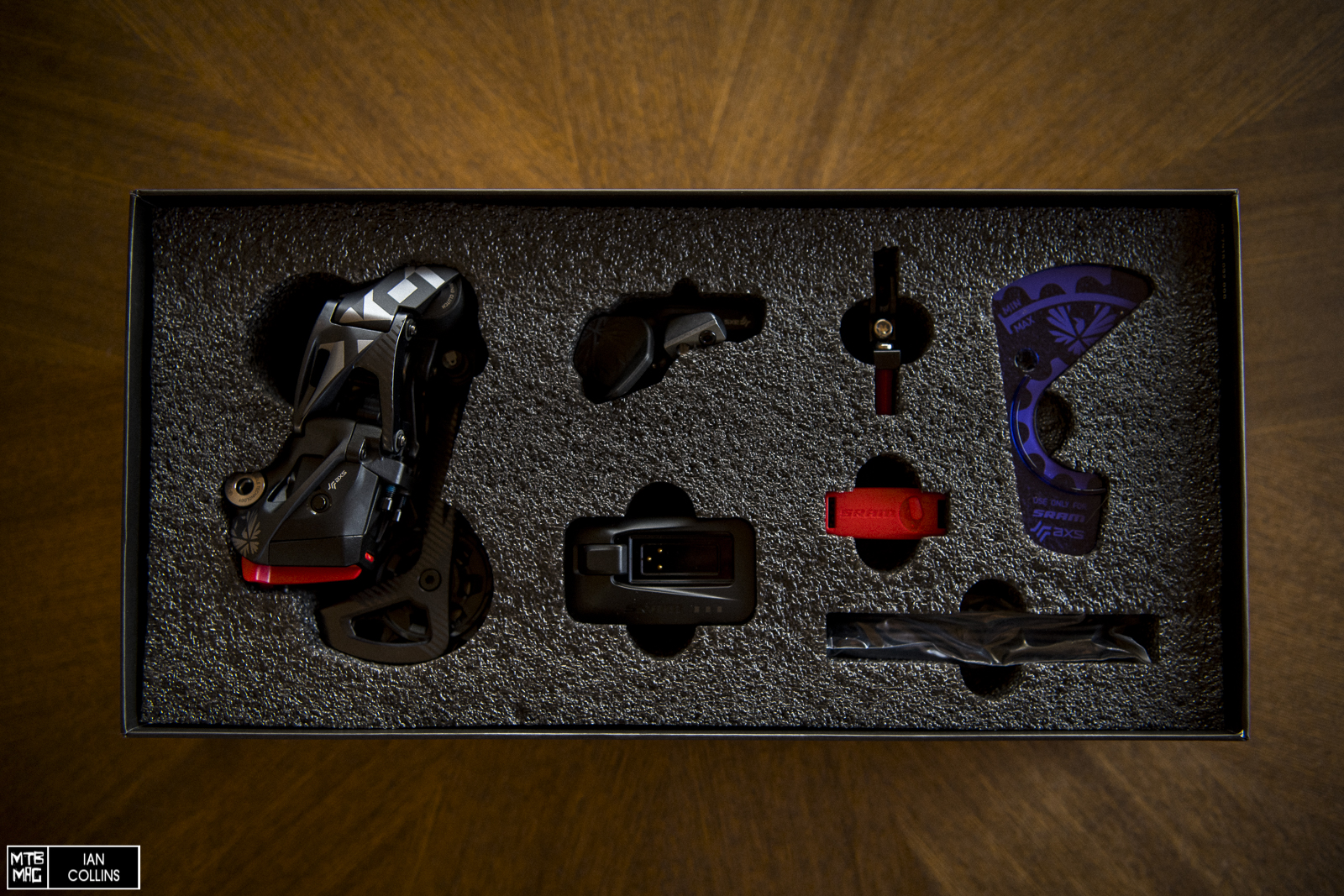 For riders who have jumped on board with SRAM’s 12 speed Eagle drivetrains in the last couple of years and want to take things to the next level with AXS electronic shifting, this is the most ideal way to do so. For $1,000 the kit comes with everything you need to yank that shifter cable and housing out of your frame. Perhaps the best thing about it is that it’s truly plug and play with any Eagle drivetrain. Got a mish mash drivetrain consisting of an NX shifter, GX cassette and derailleur with Descendant cranks? No problem. You no longer have to drop in on a pricey set of XX1 cranks or a fancy $450 rainbow colored cassette to take the dive and ditch the cable. 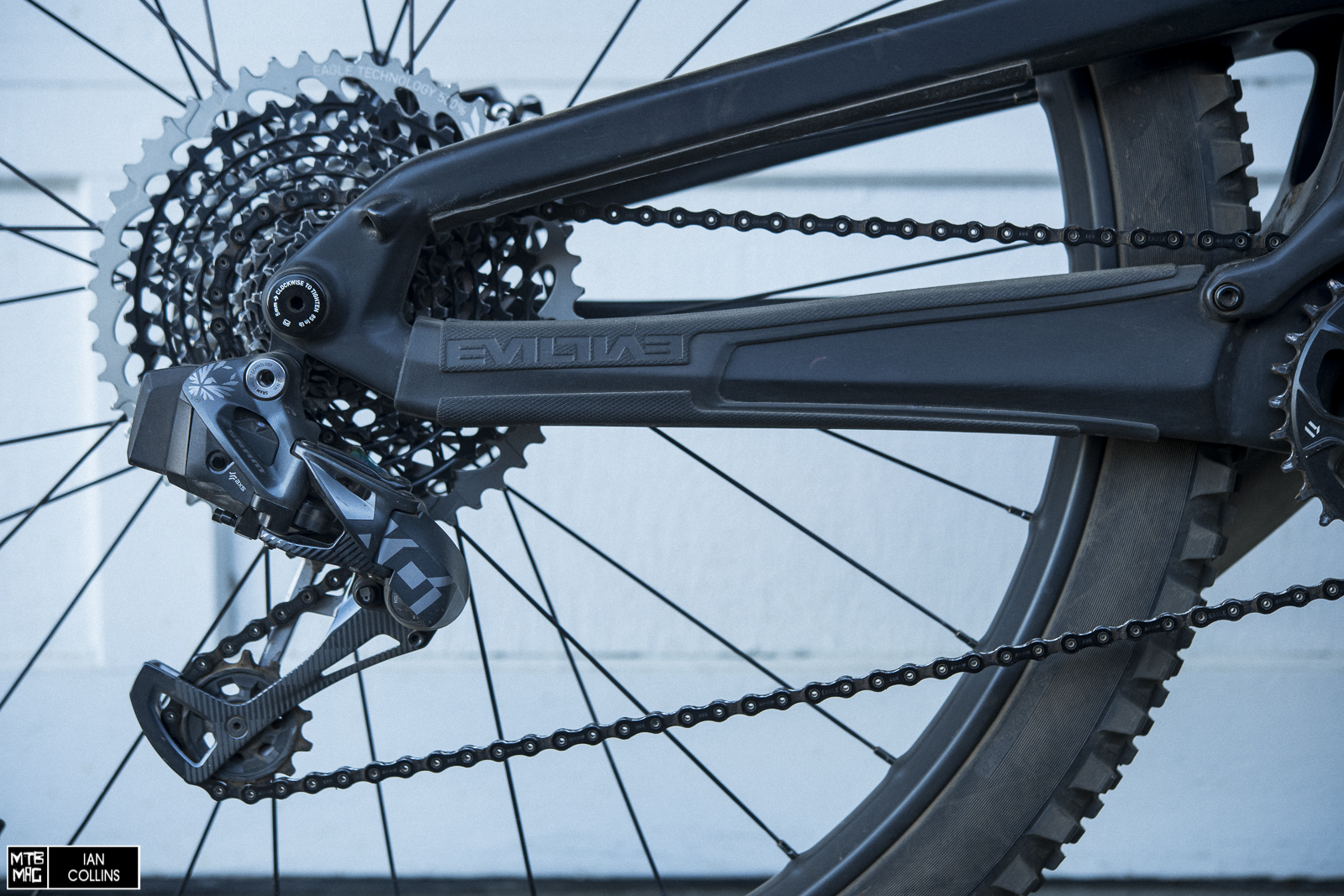 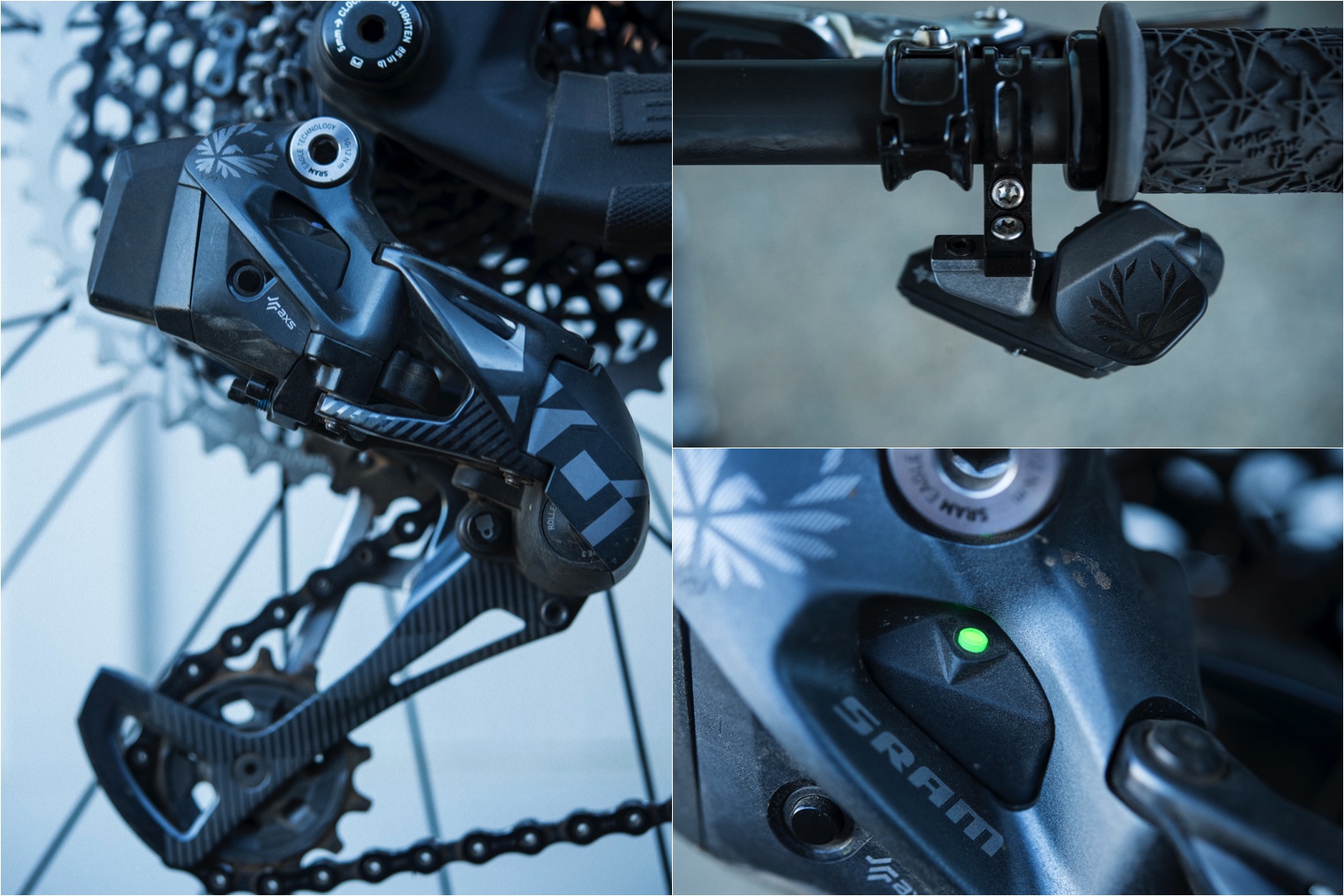 The physical installation of the AXS upgrade kit takes all of 10 minutes for a seasoned mechanic. Simply pull your old shifter/derailleur off, yank your cable and housing out and say goodbye. The AXS smartphone application is very intuitive, with a clean and logical user interface. Setting things up on the app and getting the shifting honed in takes another 10 minutes or so. Like other Eagle drivetrain systems, using the B-Gap tool is absolutely critical for achieving proper shifting. 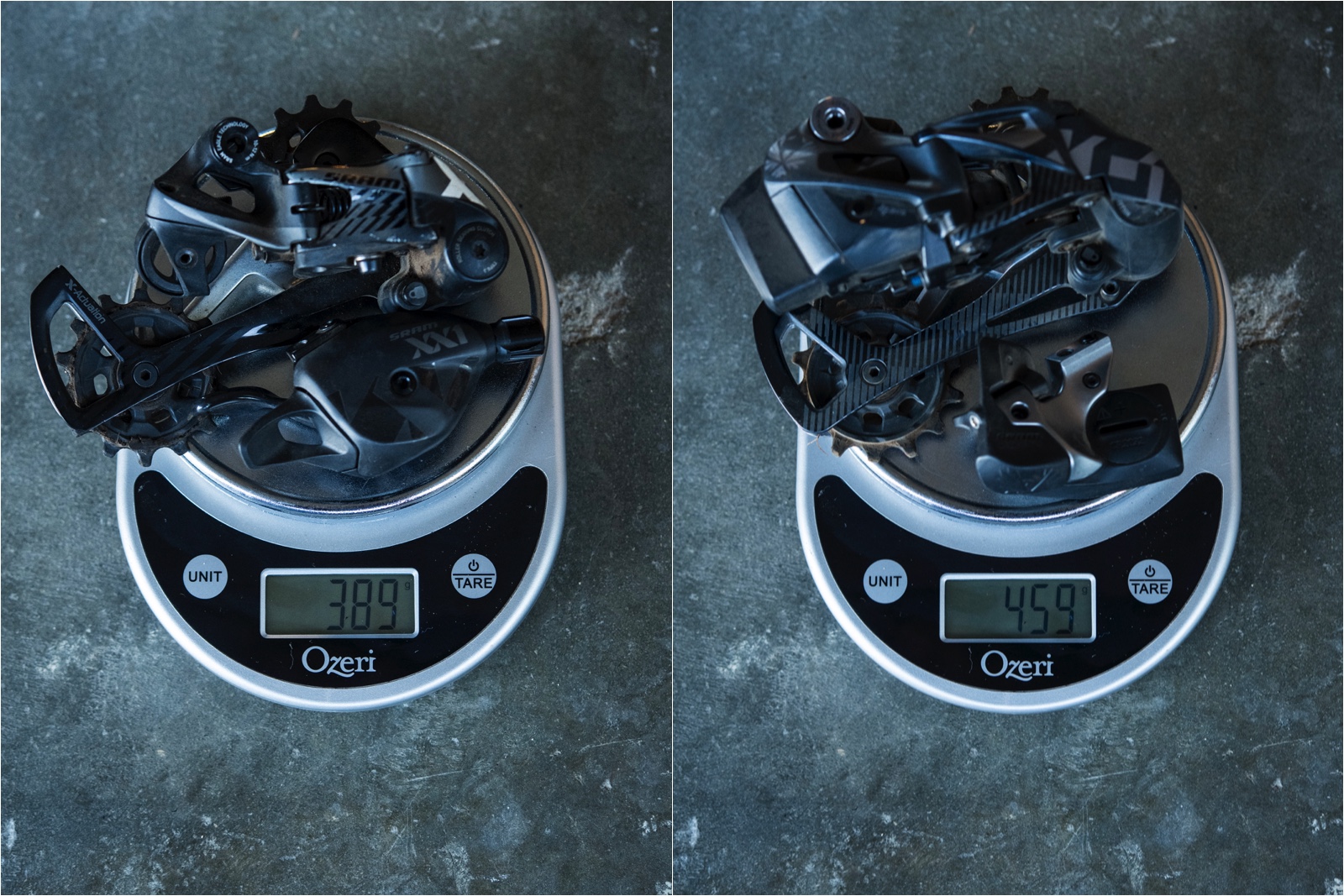 Since AXS was released, SRAM’s stance has been that the weight averages out to break even with comparable non-electronic Eagle drivetrains and we’ve found that to be accurate. While there will be some difference in weight lost due to cable/housing on a size XS bike compared to an XXL, when you add the cable/housing back into the equation the variance comes within a few grams. For the nerds out there, mine came out to 74 grams, putting AXS at a whopping 4 grams lighter. 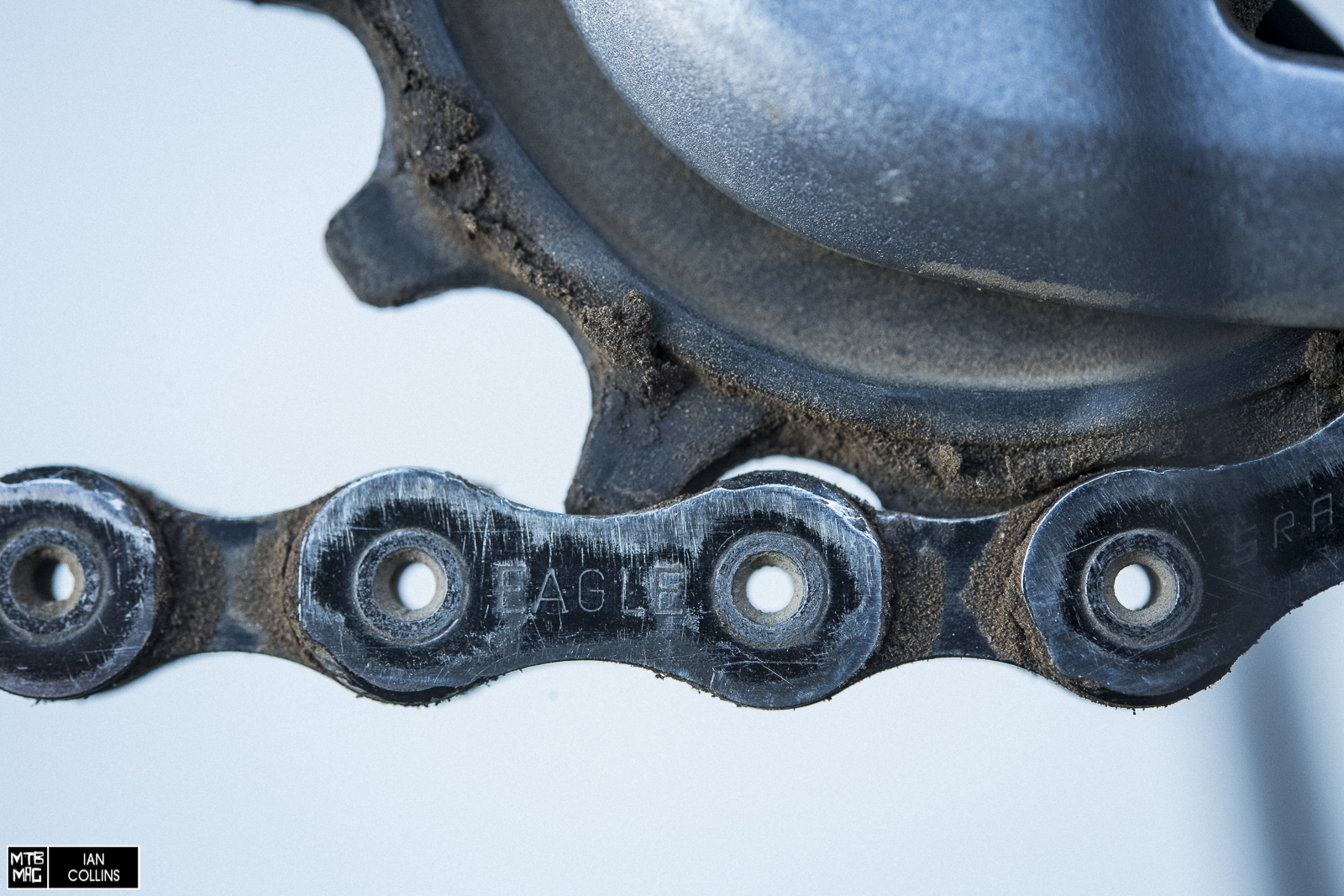 In an attempt to have our testing emulate real world consumer scenarios, we bolted our Eagle AXS upgrade kit bits onto a well seasoned drivetrain, as the photo above clearly illustrates.

We covered our first impressions and a great deal of the technical details on AXS in general when it was launched, here. We’ll also be following up on this article after at least 9 months of ride time to see how the kit fares regarding long term durability. As mentioned above, I started my time on the AXS Upgrade kit with a fairly well worn in drivetrain – I’d estimate that it was around a third to halfway through its life. One interesting and unexpected side effect that arose from this test was that despite mixing and matching new and used drivetrain parts (something that can sometimes result in slightly fussy shifting) the shift quality actually became substantially more polished once I bolted the electronic bits on. With AXS there is no cable drag, nor is there any tension issues, so the shift points are hitting precisely where they should. This means that you no longer find yourself in between gears. Speaking of being in between gears, in lieu of a barrel adjuster AXS has a “trim” function. Simply press and hold the black button at the bottom of the controller, then flick the paddle up or down one click at a time. This moves the derailleurs base position by a few hairs in one direction or another. For example, if your shifting is quick on the way up but lagging on the way down, a tap or two will correct things just like a couple turns of a barrel adjust would. 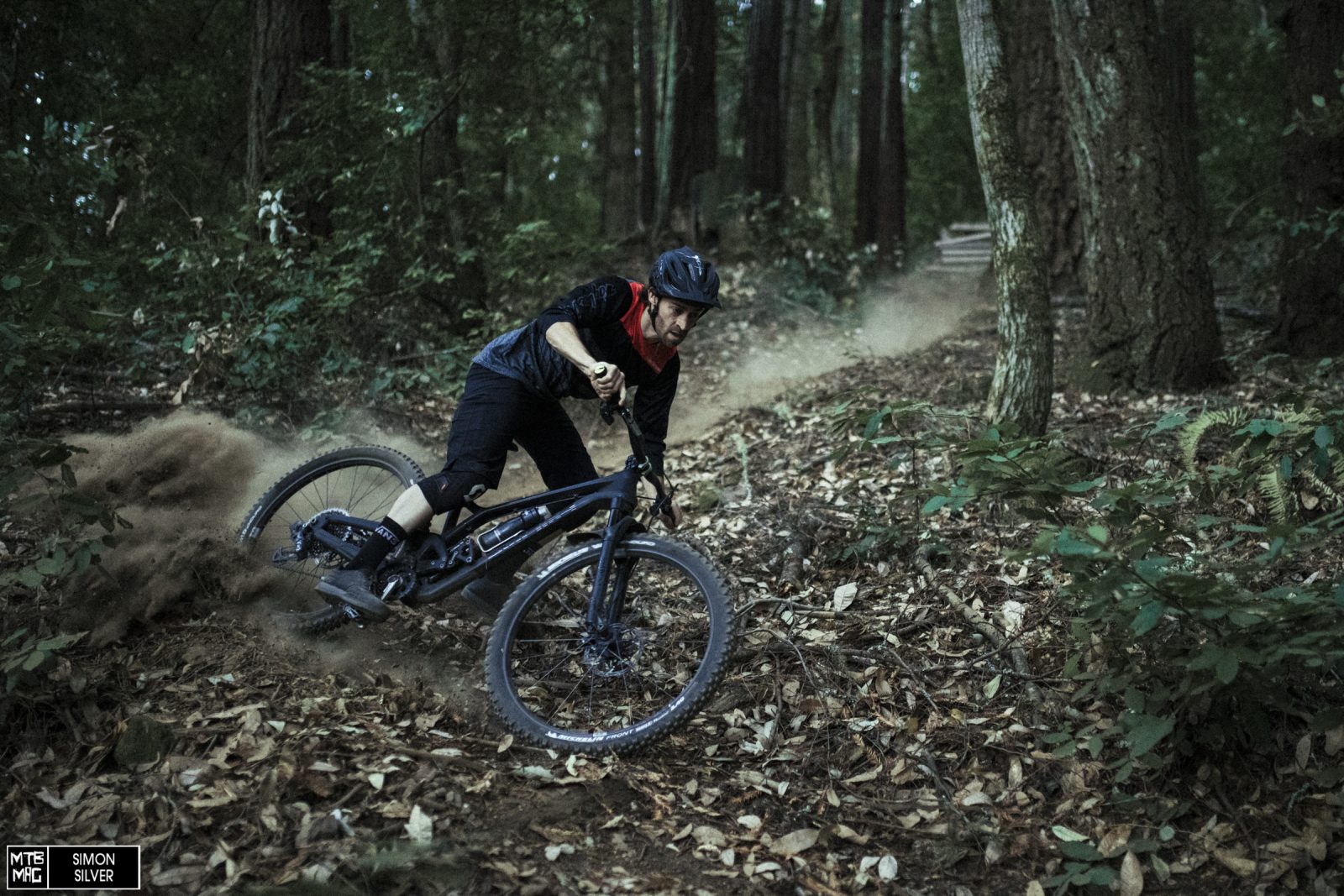 With the all of that fine tuning talk in mind, I’ve found AXS to very much be a set it and forget it system – after the initial set up and break in, you no longer have to micromanage your drivetrain and worry about things like cable stretch. An interesting feature on the derailleur is the “overload” clutch protection. The derailleur senses impact and when bashed against something, it moves up toward the larger gears – away from harm. As the Santa Cruz area isn’t all that rocky, I have yet to bash it against any rocks, but I have smacked it against some saplings and had some rather large branches get tangled up with the derailleur without any consequence. One bonus with AXS derailleurs is that they have an additional 10mm of ground clearance compared to non-electronic Eagle derailleurs. On 27.5″ bikes, this is especially beneficial as they sit even closer to the ground than derailleurs on 29″ bikes. Some notes on the controller…After 20 years of conditioning, it did take some time for it to feel as intuitive as the mechanical shifters that I’m accustomed to, but along with some fine tuning of placement I eventually re-wired my brain and got along with it quite well. One thing worth considering is that by spending about 30 second on the AXS app, you can reverse the shift paddles’ respective duties. In stock form, pressing the lower paddle moves the chain to the larger, easier gears and pressing the upper paddle moves it to smaller, harder gears. Personally, this configuration just did not click, so I reversed it. My findings from chatting with a handful of folks is that it’s about 50/50, with half preferring the stock setting and half favoring flipping it…to each their own. Beyond simply flipping directions, in the AXS app you will find a wealth of customization options for range of personal preferences with regards to controller operation. 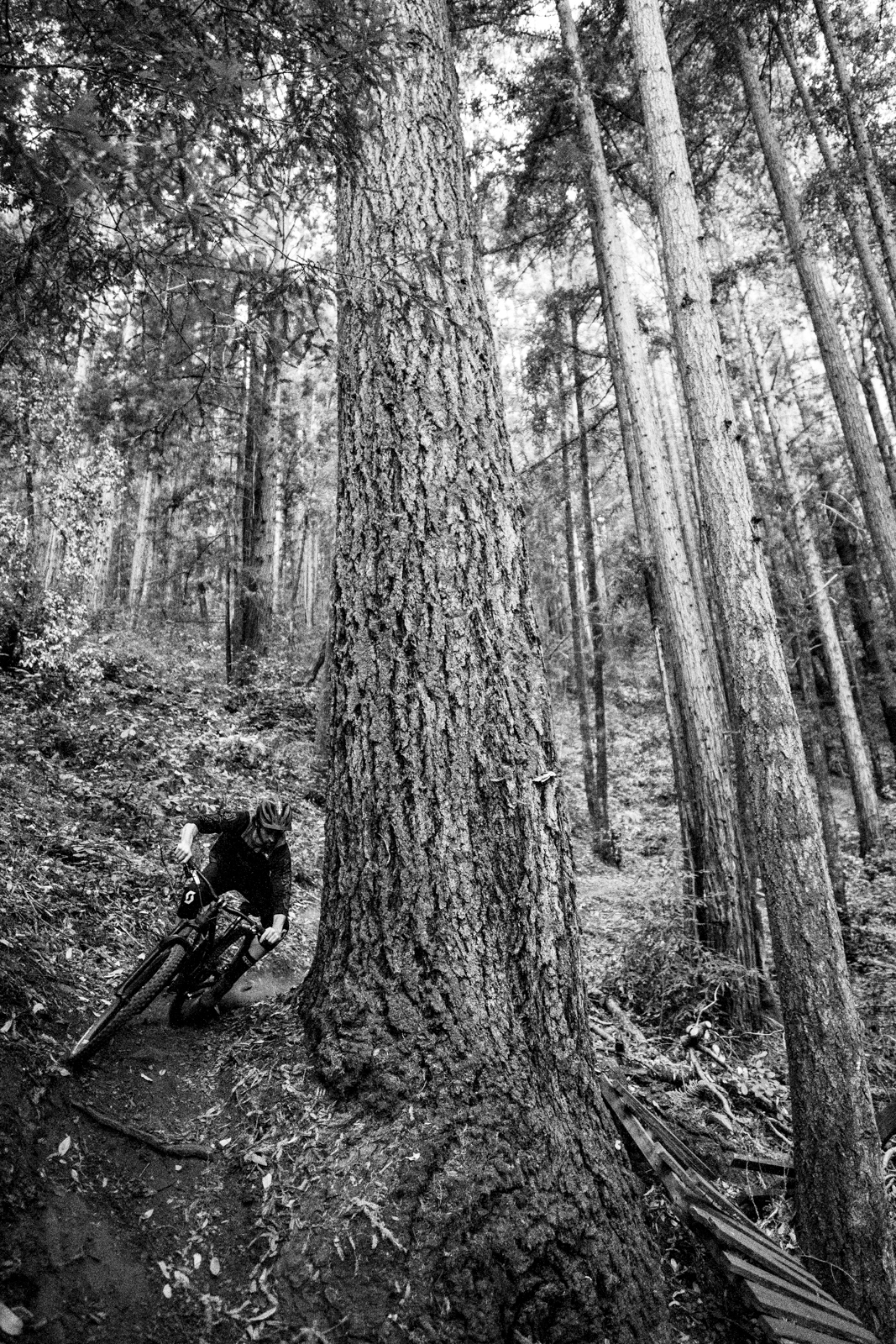 As far as real world battery life goes, I had no interest in pushing things to the limit, but did find it to be excellent – in short, you’d have to really try to get stranded with a dead battery. Something worth considering is that you can always carrying a spare as it’s only ~25 grams and quite small. Additionally, if you’re in a pickle and also have a Reverb AXS seatpost and your derailleur gets dangerously low on juice, you can always swap batteries with the seatpost as the post will generally have longer life. Anyhow, before embarking on a trip to the Sierras, one kind soul was nice enough to remind me to take the battery out first. This is because the movement from driving will keep the system alert for hours on end and thus drain the battery prematurely. In any case, riding a few times a week I would go 2-3 weeks between charges…My rule of thumb was to re-charge every other drivetrain clean, and leave my charger on the workbench – in plain sight, right by my tools. SRAM claims a 20 hour ride time per charge, and the system gives you plenty of fair warning with a red indicator meaning you’ve got a couple more rides, then with flashing red indicator saying it’s dire to charge things. Lastly, there is the matter of the battery in the controller. It’s a CR-2032, which is widely available at run of the mill pharmacies. According to SRAM it should keep things moving for “up to two years”. Like the derailleur, the controller will also use color coding to inform you it’s time for a change. In summary, the battery life is damn good, and SRAM has done an excellent job with indicators and warnings being intuitive and idiot proof.

While I’ve spent most of my time riding blown out dusty trails in Santa Cruz, I also went to the Sierras for a couple of big rides in Downieville, searching for more adverse conditions. At the top of the mountain I was greeted by bits of snow and a fair amount of mud. I also scored one freak rainy day in mid September at home. During my entire time riding this group, the derailleur actually hasn’t missed a single shift. As a bonus it has made noteworthy improvements to the overall shift quality of my drivetrain, despite not starting with an entirely fresh new setup. I’m hard pressed to find anything to pick apart with this group – with the only thing coming to mind being the minor matter of getting used to the new ergonomics. All in all, despite being pricier than the average shifter/derailleur combo, it’s also light years ahead in terms of shift quality, making it money well spent. The fact that the Eagle AXS upgrade kit plays nice with Eagle components at all platforms ranging from NX to XX1 makes it that much more accessible and worthy. 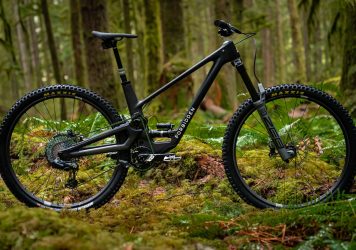 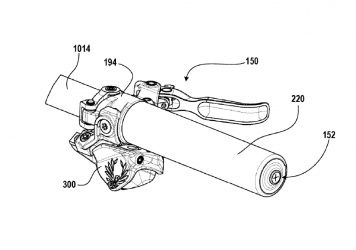 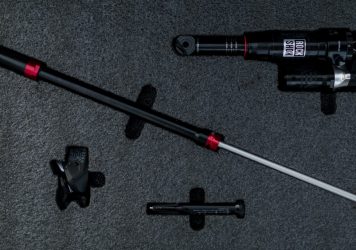