I first heard about BikeFlights a few years ago from a friend who would travel to various locations and use their service to mail his bike to said locations and save quite a bit of money in doing so. Since then, the company has seen quite a bit of growth – so much so that they now even offer their own physical products, such as the box being reviewed here. First, a little backstory… 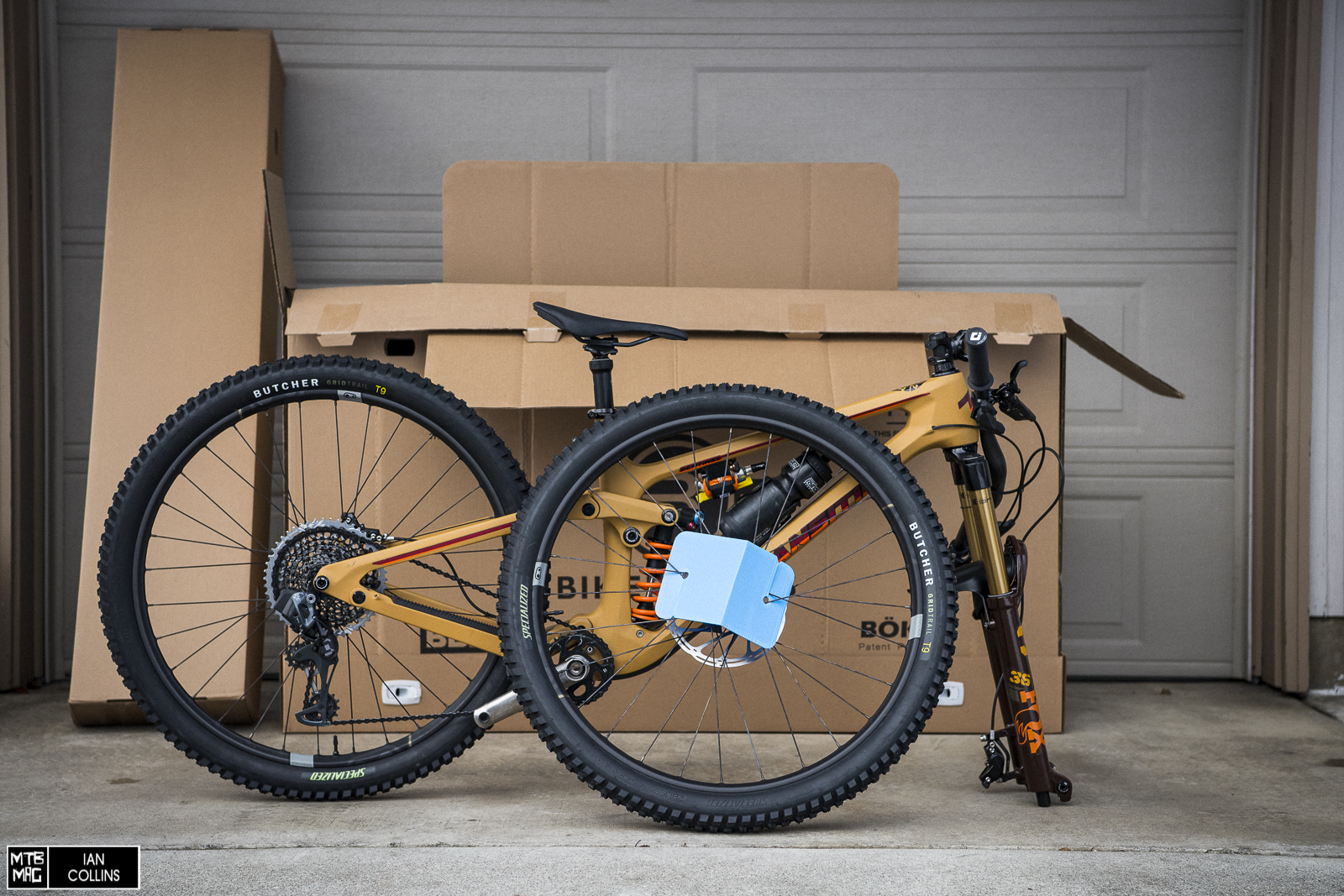 By using BikeFlights you can cut costs any time you’re mailing a bike somewhere via major shippers such UPS and FedEx or DHL. By using them as a liaison, you’re essentially getting in on the discounts they receive through having a bulk rate. There are numerous bike shops who participate in their shipping program, which can be quite helpful and cost effective if you aren’t the type to box your bike up on your own. Another nice advantage is that you can get a clear quote on pricing in advance through their website, so as to prevent surprises at the shipper.

While BikeFlights also offer hard plastic travel cases for bikes, they were kind enough to send out a sample of their new Bike Box. It’s made from reinforced cardboard and ships broken down with all of the essentials you’ll need to pack everything up securely, so as to protect your assets. You can use this to either mail your bike somewhere, or travel with it by plane. I went with the latter for my first flight on a recent trip from Spokane to San Jose to escape the snow and ride down in the Santa Cruz area for a few days. The box is designed so it can be used over and over. Its shelf life will vary based on a few factors such as how well you treat it and how carefully the airlines handle it. Anyhow, here’s how it went… 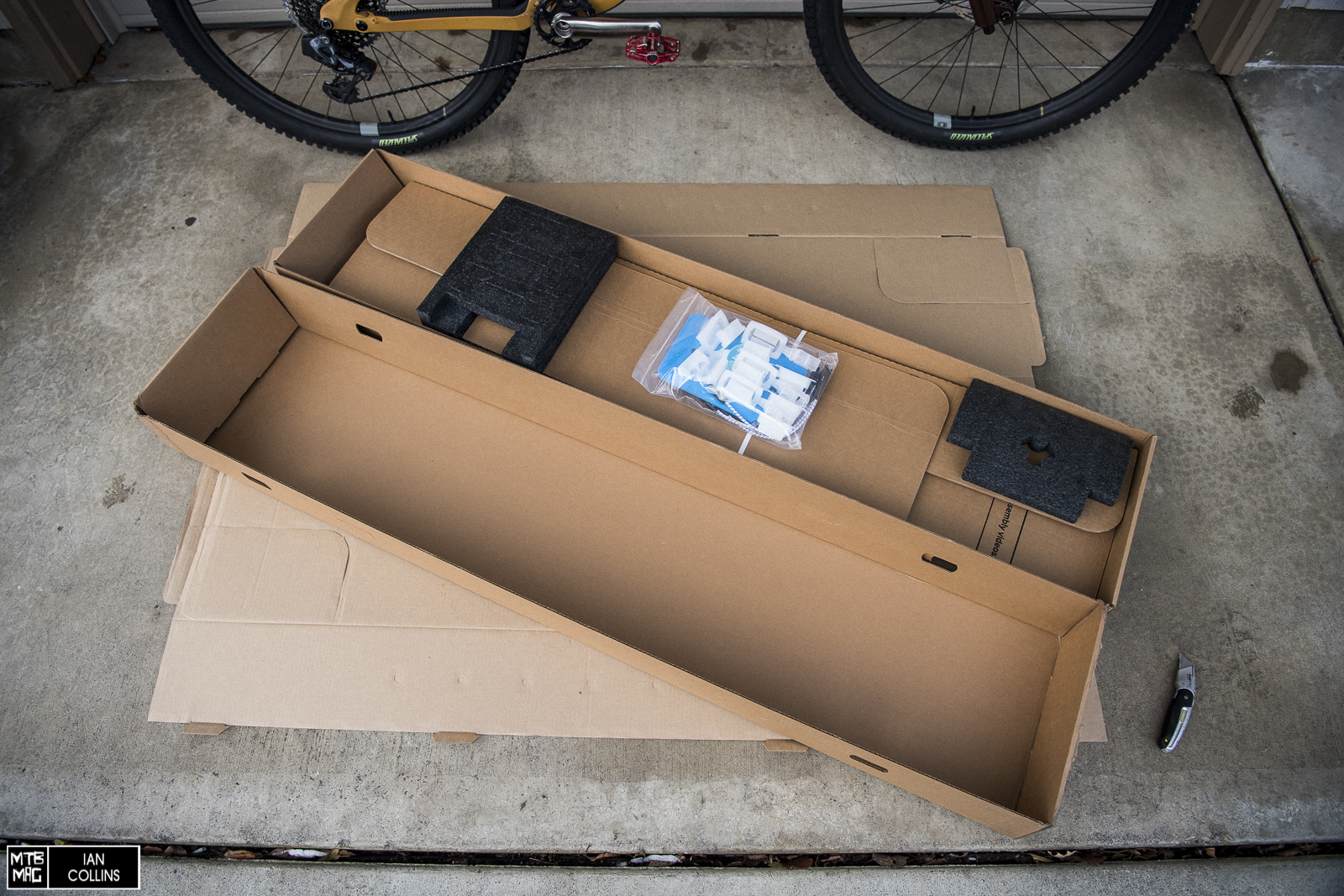 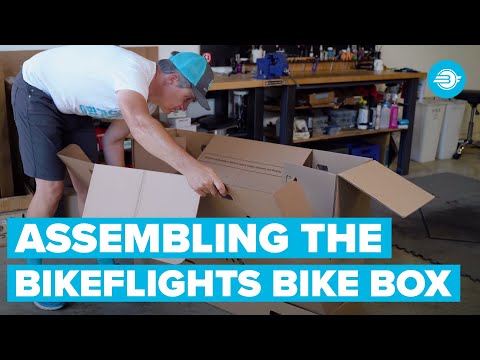 Unpacking everything takes just a couple of minutes and building out the box itself takes about 5-10, although surely it gets faster with practice. There is a top and bottom cap that provides added structural rigidity compared to a standard bike box. Those caps snap into the rest of the structure with 4 sturdy plastic clips at both the top and bottom. The clips can be installed and removed over and over again. The box that the assembly ships in opens up to act as a divider to separate your handlebar and front wheel from the rest of the bike while in transit. You can reuse this for compact storage where it will easily fit under a bed – or, in the event that you wanted to mail the BikeFlights box somewhere on its own. 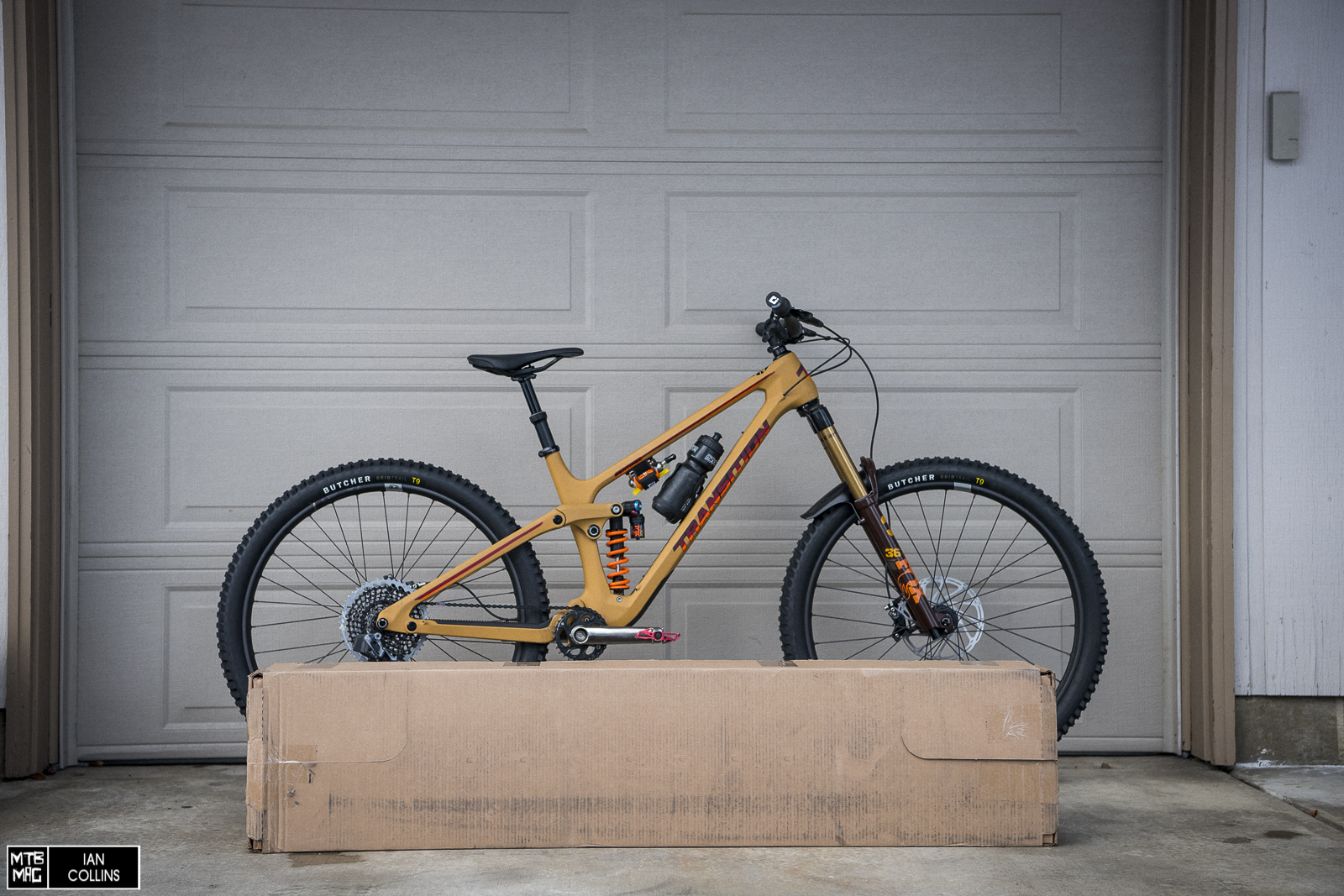 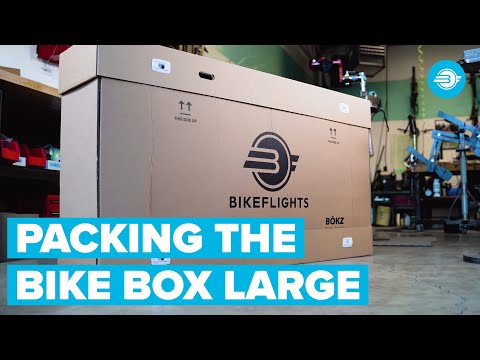 Since I ride a Large 29” long-ish travel bike, I opted for the Large box – there is also a medium for smaller bikes. Everything went together very logically and with plenty of width side to side. The one hangup I had was that my bike is on long side of things. BikeFlights recommends letting the air out of your fork and rear shock, then lowering your tire pressure down to a few PSI to shorten your bike’s overall length. This is certainly helpful, although if you have a coil rear shock, you may have to remove your spring. The same goes for a coil sprung fork, which at the cost of another 5-10 minutes has the potential for being a minor headache, but alas there aren’t many coil sprung forks on the market these days. 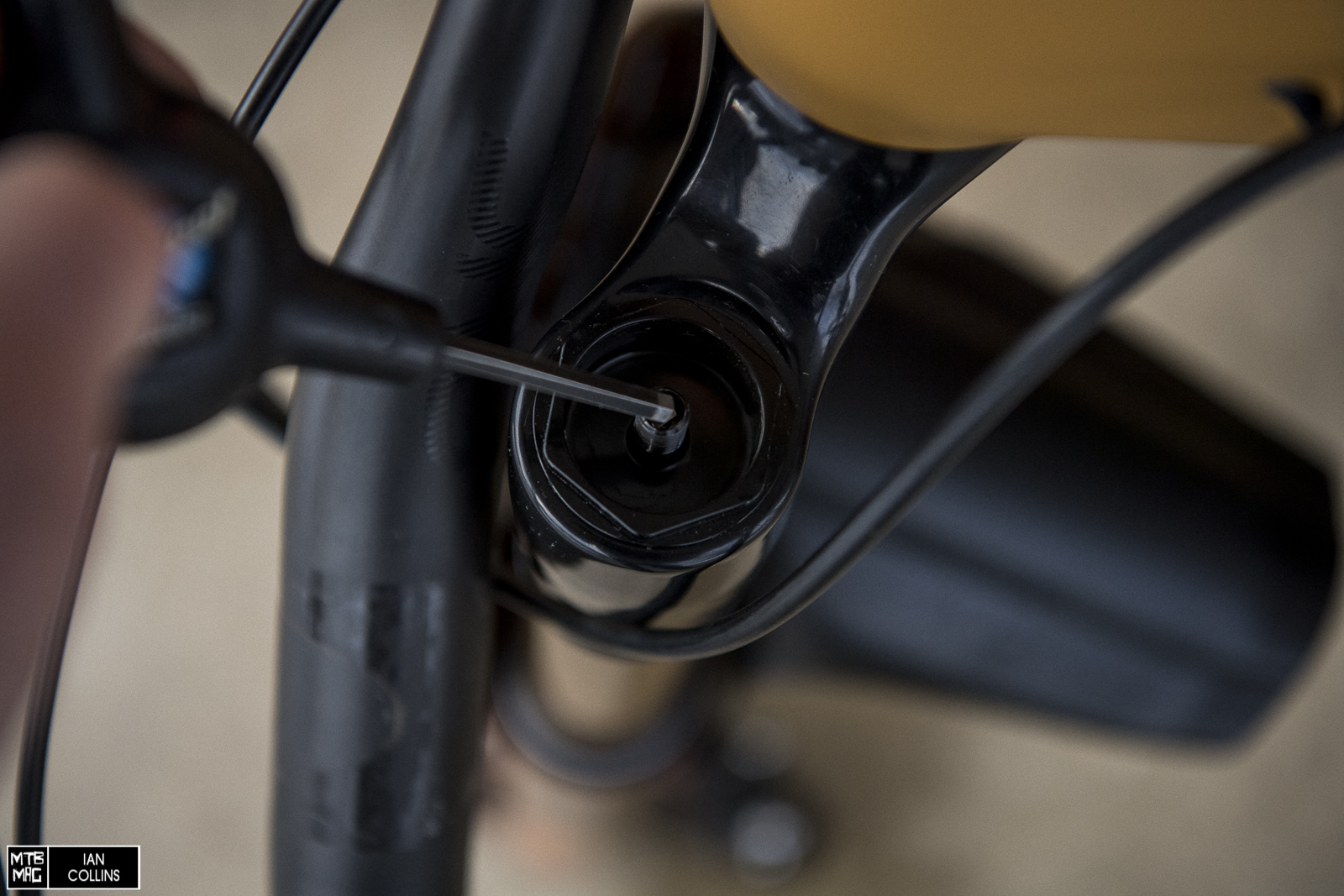 As far as packing the bike was concerned, everything was logical, orderly and straightforward. There are small bungee cords which pop through holes in the divider to secure your frame, handlebar and front wheel to it, so as to limit jostling and shifting around during transport. The cords have a hooked end so as to easily hook to a spoke, or double over onto themselves. There is also a corrugated plastic cover which clips nicely onto your spokes to cover the front wheel’s axle and prevent it from puncturing through the cardboard. 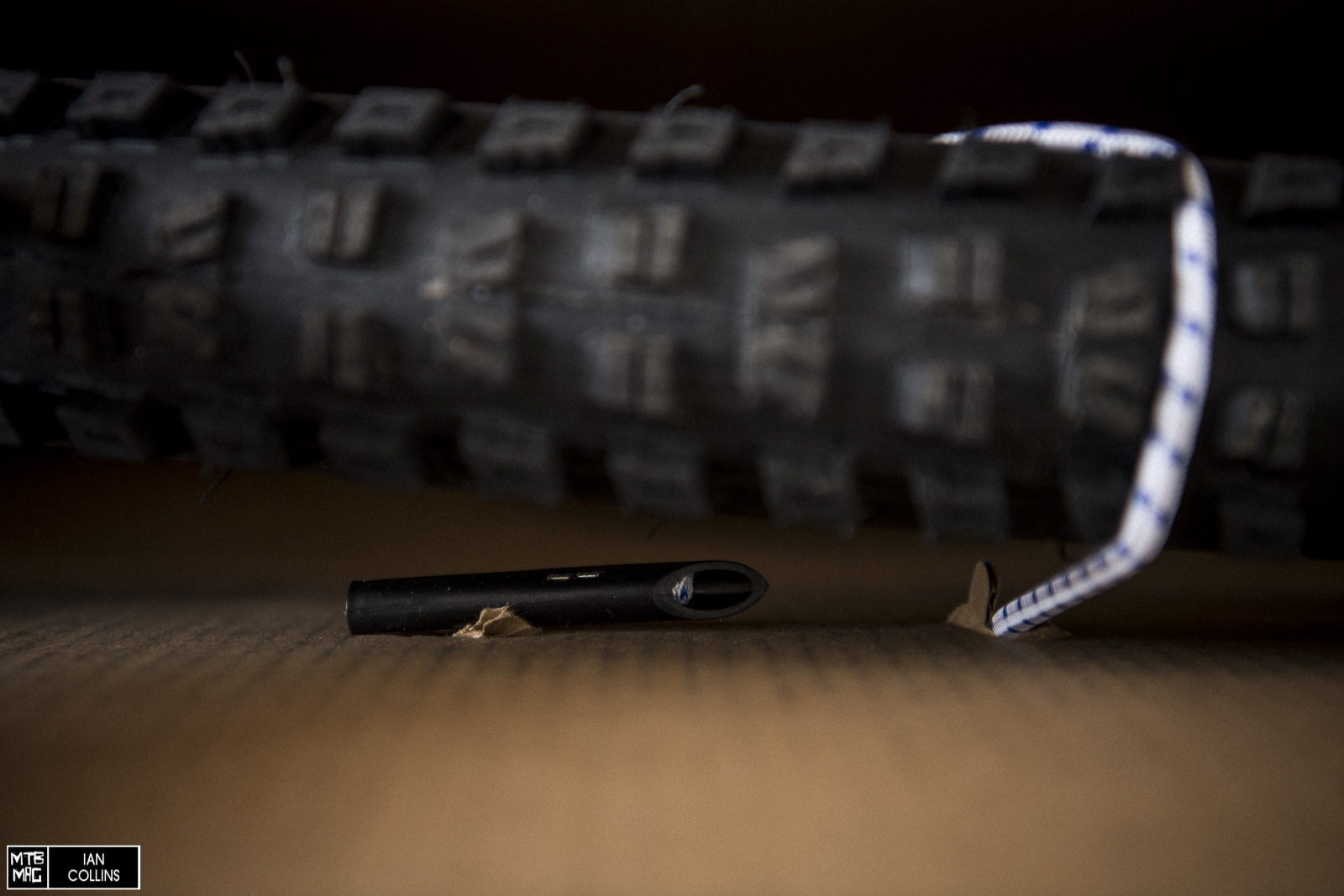 The package ships with cardboard tubes to fit your axle through to prevent your fork from being crushed as well. Both boost and standard axles are included with spares. Speaking of spares, there is also an extra hub protector as well. A sturdy ziploc bag which the small parts ship in doubles as a way to hold your pedals and other small parts. There is a foam block with multiple inserts to protect your fork as well as another to bite around your downtube and wedge the frame into place so it doesn’t rock back and forth. Both of them are made from sturdy, dense foam and designed to last. You can remove your handlebar, or your handlebar and stem together. I only removed the handlebar and had plenty of height despite the fact that I run a rather tall front end. 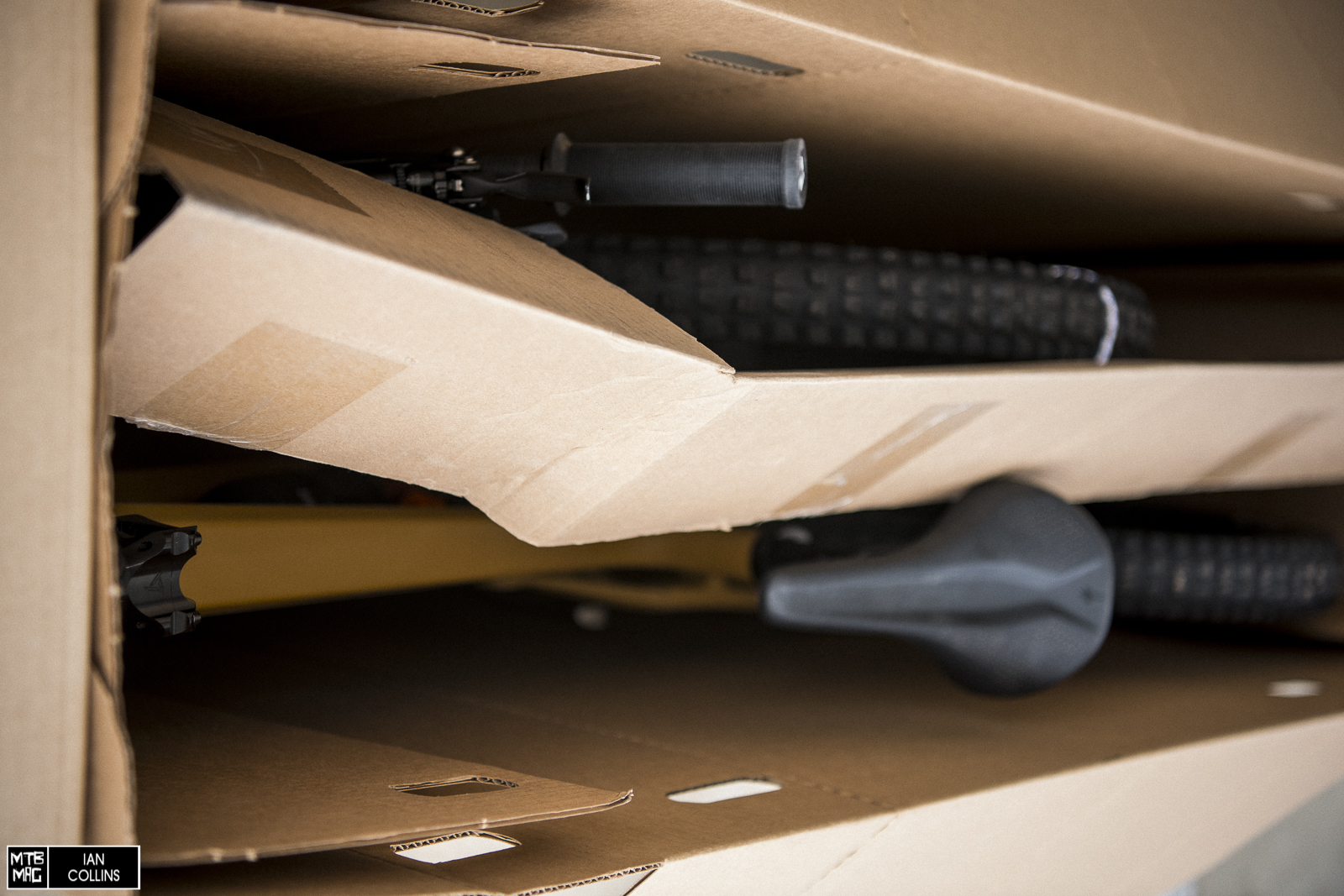 In my particular situation, I aired down my fork but didn’t remove my rear coil spring. Unfortunately I still needed just a bit more length, so I chose to turned my fork around rather than remove the rear spring. This wasn’t a big deal initially as I just flipped the foam block around that encases the fork dropouts. However, that did make for some additional necessary steps. In order to get the bike in the box I then had to disconnect my brake caliper and remove my fender. That isn’t a huge deal, but it did add a few minutes to both breakdown and reassembly. Perhaps in the future Bike Flights will add an Extra Large box to their lineup to fit XL and XXL bikes as well. After all, airlines generally charge by weight, so adding a few inches of length would most likely not incur any additional oversized fees. The cost of traveling with a bike varies with the airline you’re flying on, and in my recent experience with Alaskan airlines the weight threshold is 75 pounds. The complete package weighed exactly 50 pounds, which is often the limit for other airlines. That 50 pound mark included my pedals along with everything I ride with on the bike including fender, multitool, tube, CO2, plug kit, tire lever, bottle and cage. So far I’m very pleased with how everything has worked out. I can’t speak to the box’s life cycle – as mentioned prior, it will vary with treatment but I’d imagine it should last well over a dozen round trip flights and battle wounds can be patched and reinforced with tape if necessary. At present, I’ve only found one small downside – the lack of wheels. I managed to strap the waist band of my photo bag to my wheeled luggage and haul everything through the airport carrying the bike box with both hands, but it was definitely a workout. In the midst of my huffing and puffing, I contemplated the idea of taping a plastic layer to the bottom of the box so it would be easy to drag around without damaging the cardboard. Perhaps that could be a worthy update for the next iteration and BikeFlights will send us commissions for the idea. Or, maybe it’s a bad idea…who knows? Jokes aside, it moves through the airport on a cart just fine even if it’s a bit wide. 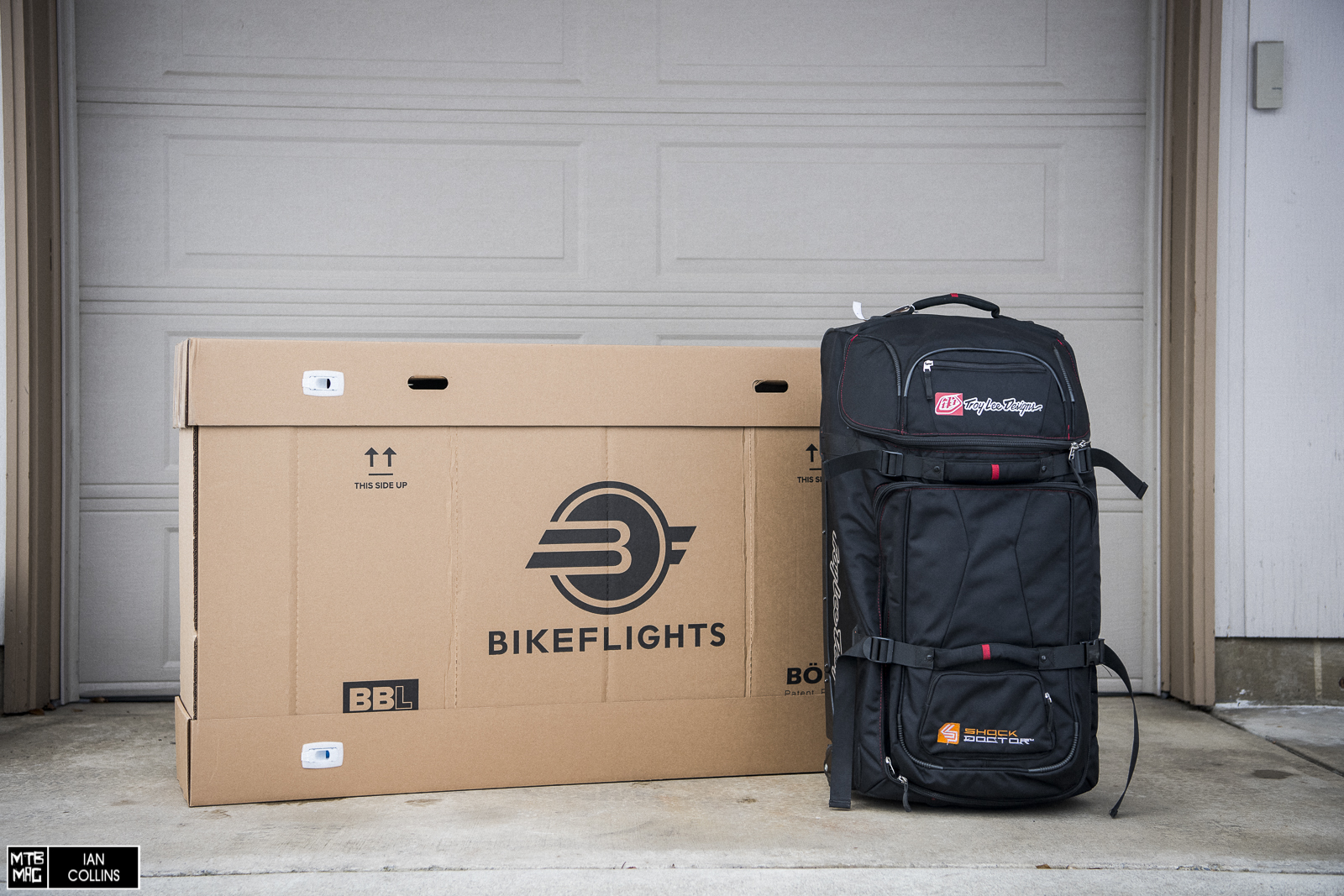 With the above in mind, if you’re someone who is constantly on the go in the air with your bike, perhaps a travel bag from BikeFlights, EVOC, Dakine or whomever else is a better investment, but keep in mind they usually run about three times the cost. All in all, this is a great system for someone who flies just once or twice a year for trips with their bike. Compared to saving a few bucks by scrounging a bike box from a local bike shop, you have the benefit of not needing any zip ties or packing tape, plus added security and ease of use of a vertically integrated system designed to keep your bike secure. All in all, this is a genius product.