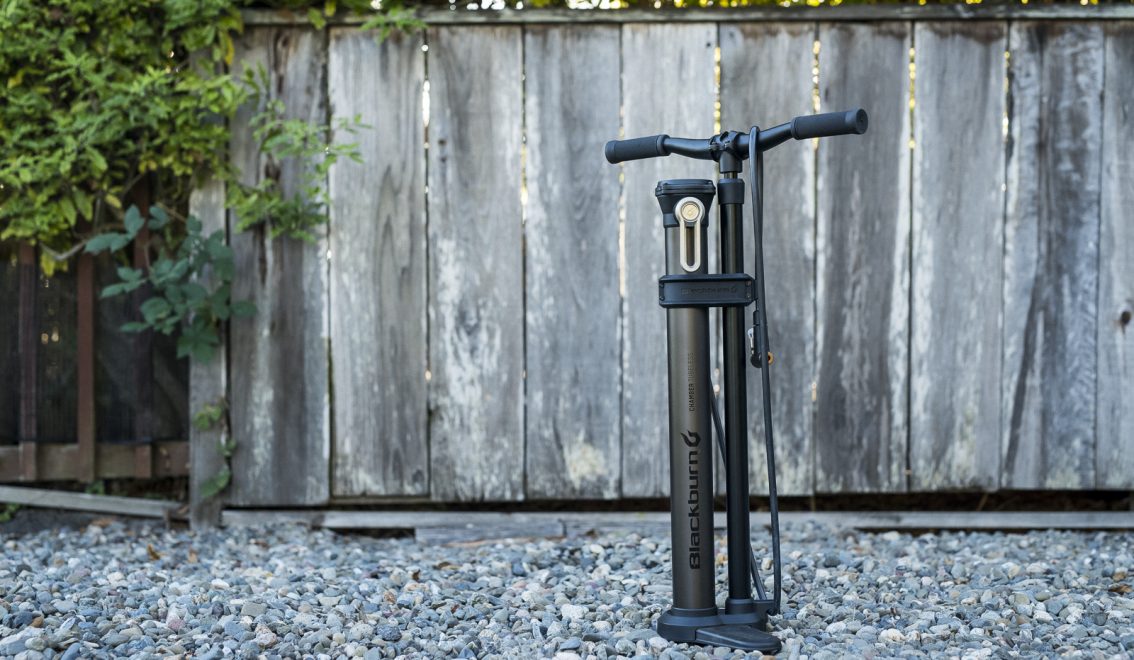 For the last few months I’ve been using Blackburn’s Chamber Tubeless pump/burst inflator for all of my tubeless tire swaps as well as day to day pressure re-ups. It joins a small handful of other brands who’ve integrated a floor pump with a high pressure tank meant for using a burst of air to quickly inflate tricky tire and rim interfaces on tubeless setups. It comes in a bit on the pricier side, but boasts a lifetime warranty, and the option to put your own bar and grips on, which isn’t an imperative, but it’s fun nonetheless. Here’s how it’s been working out… 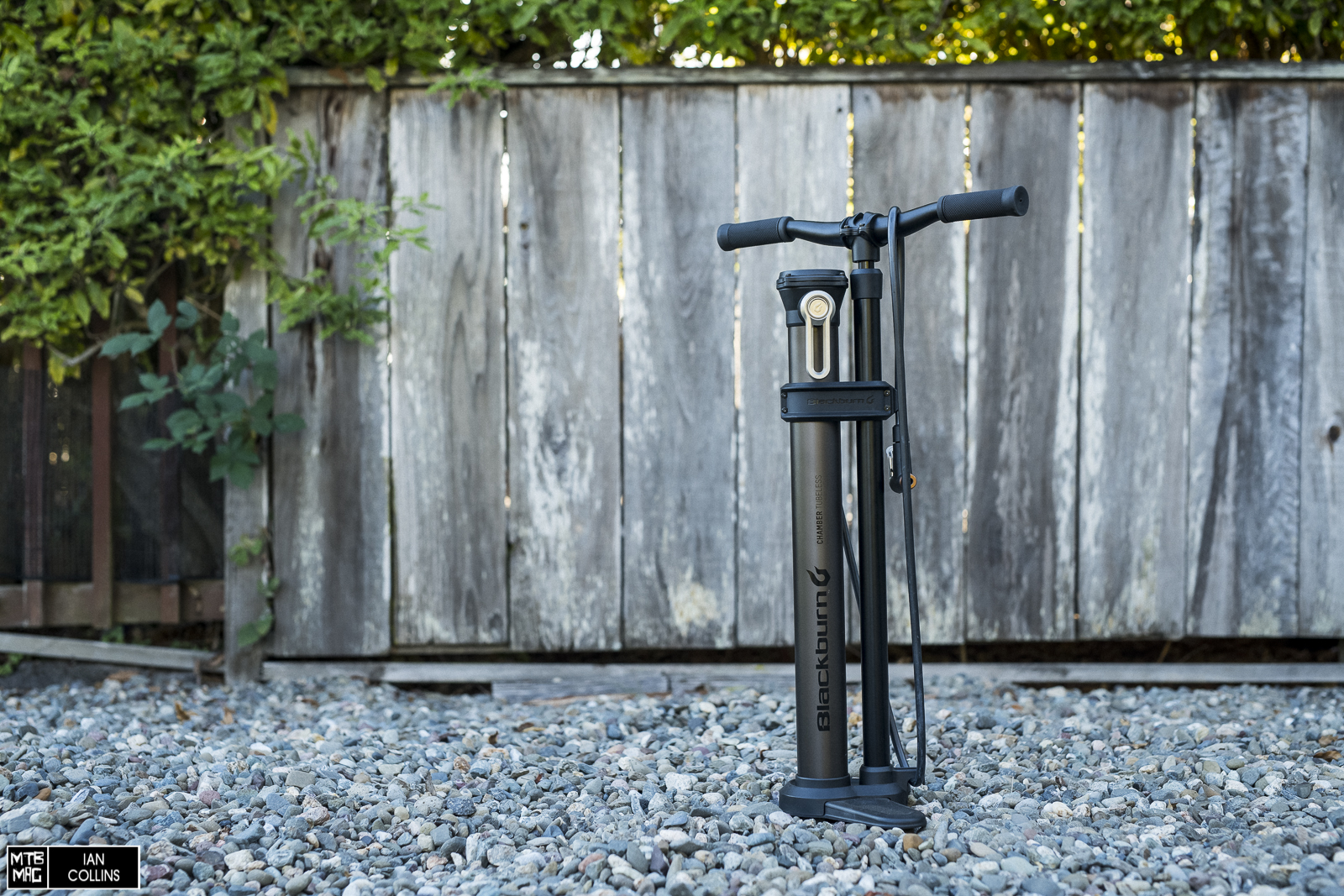 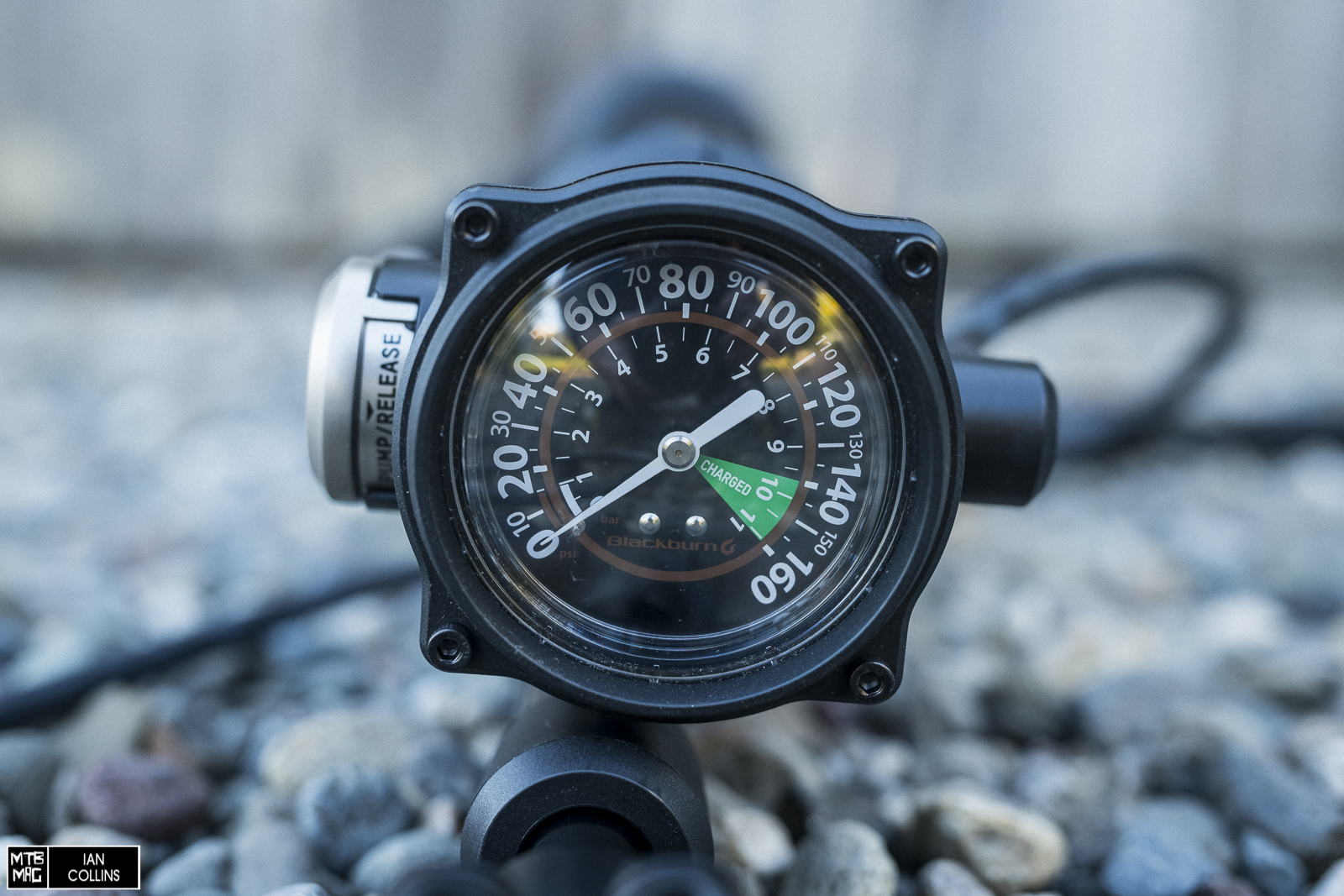 The gauge is clear as day, listing in both PSI and bar. The green zone is where you want to be if you plan to use the burst tank. 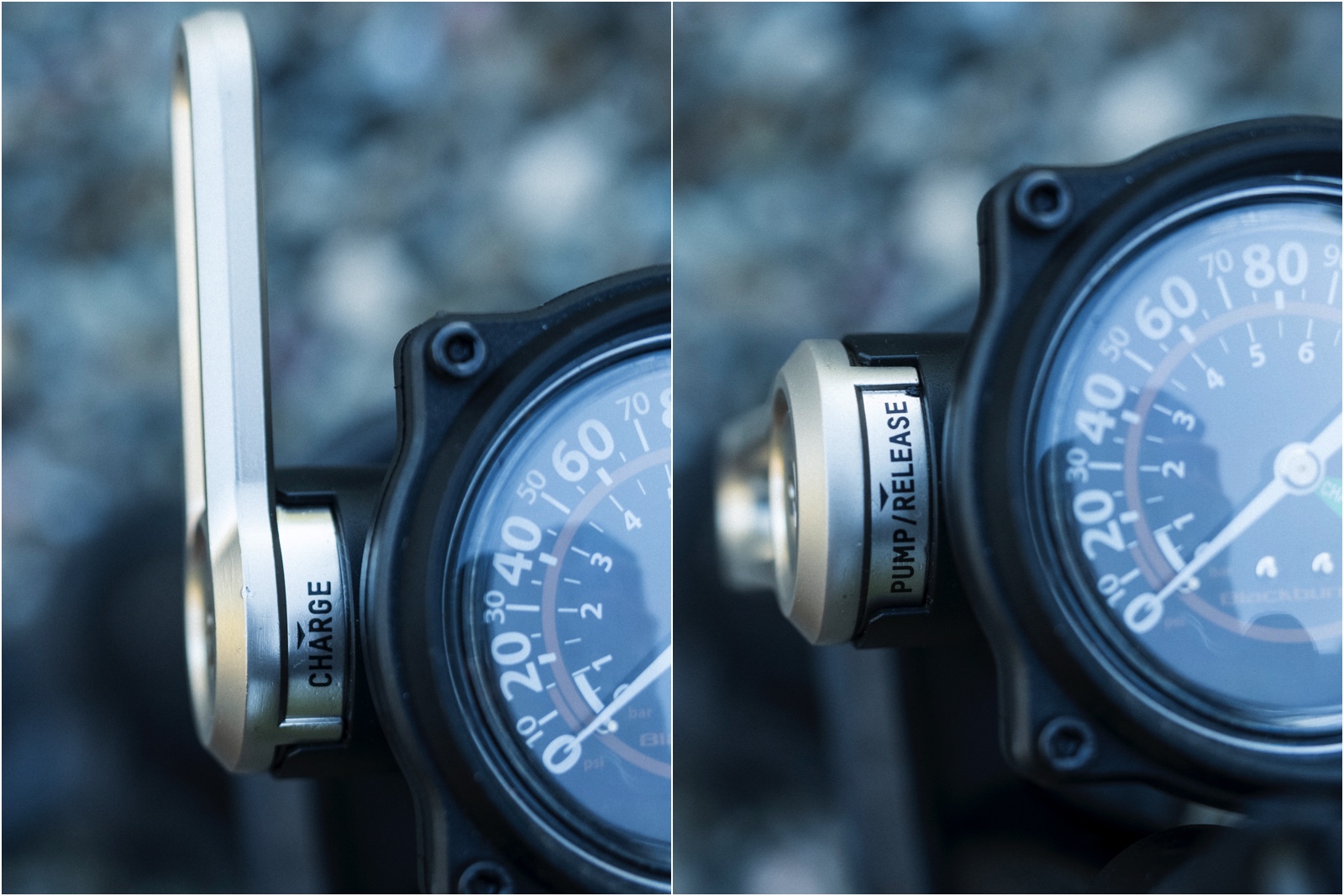 The lever to toggle between charging and releasing the air is large and moves 90º between each position. It clicks into each place with a clear, audible snap. 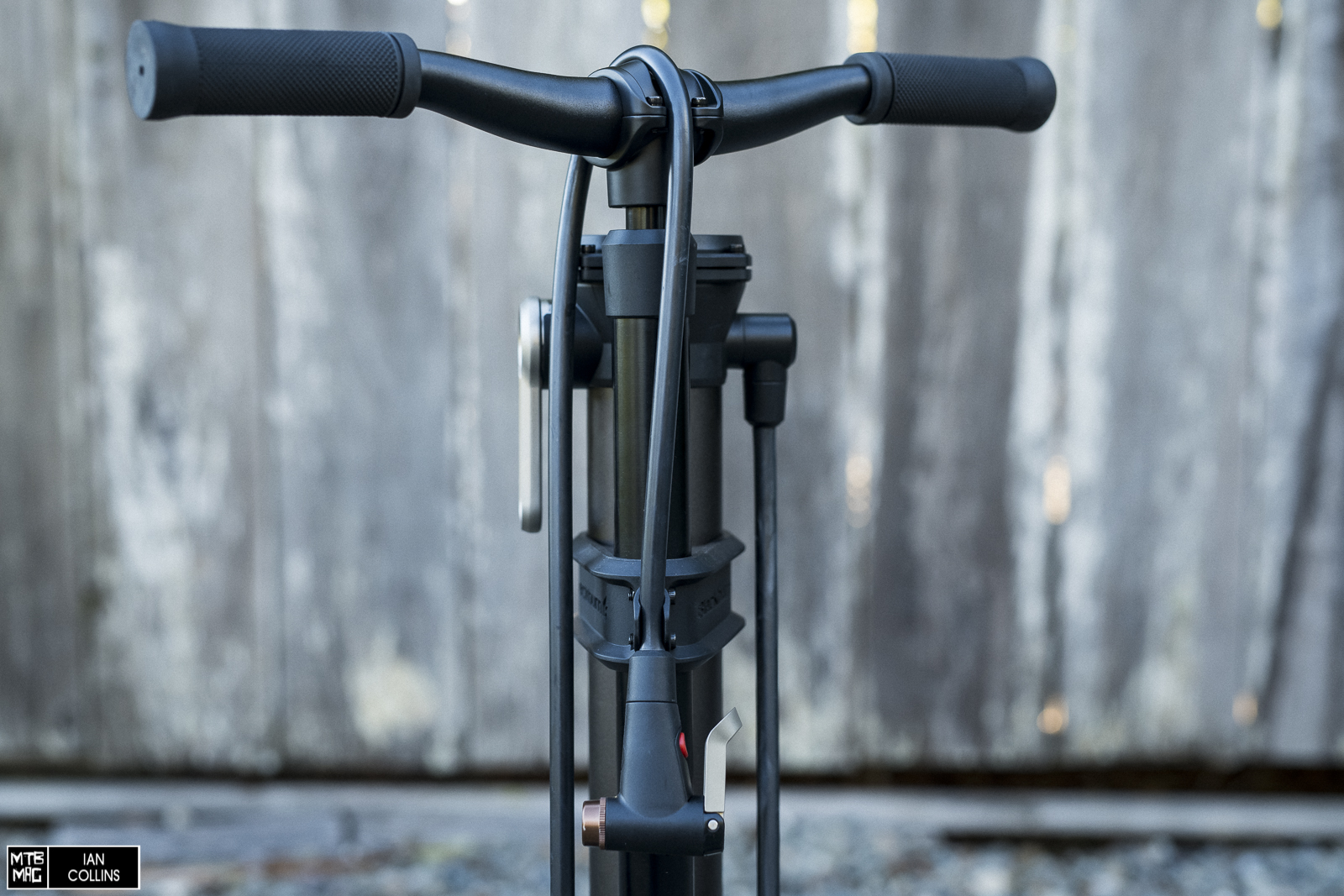 The tabs to keep the hose and head in place are logical, making for tidy storage. 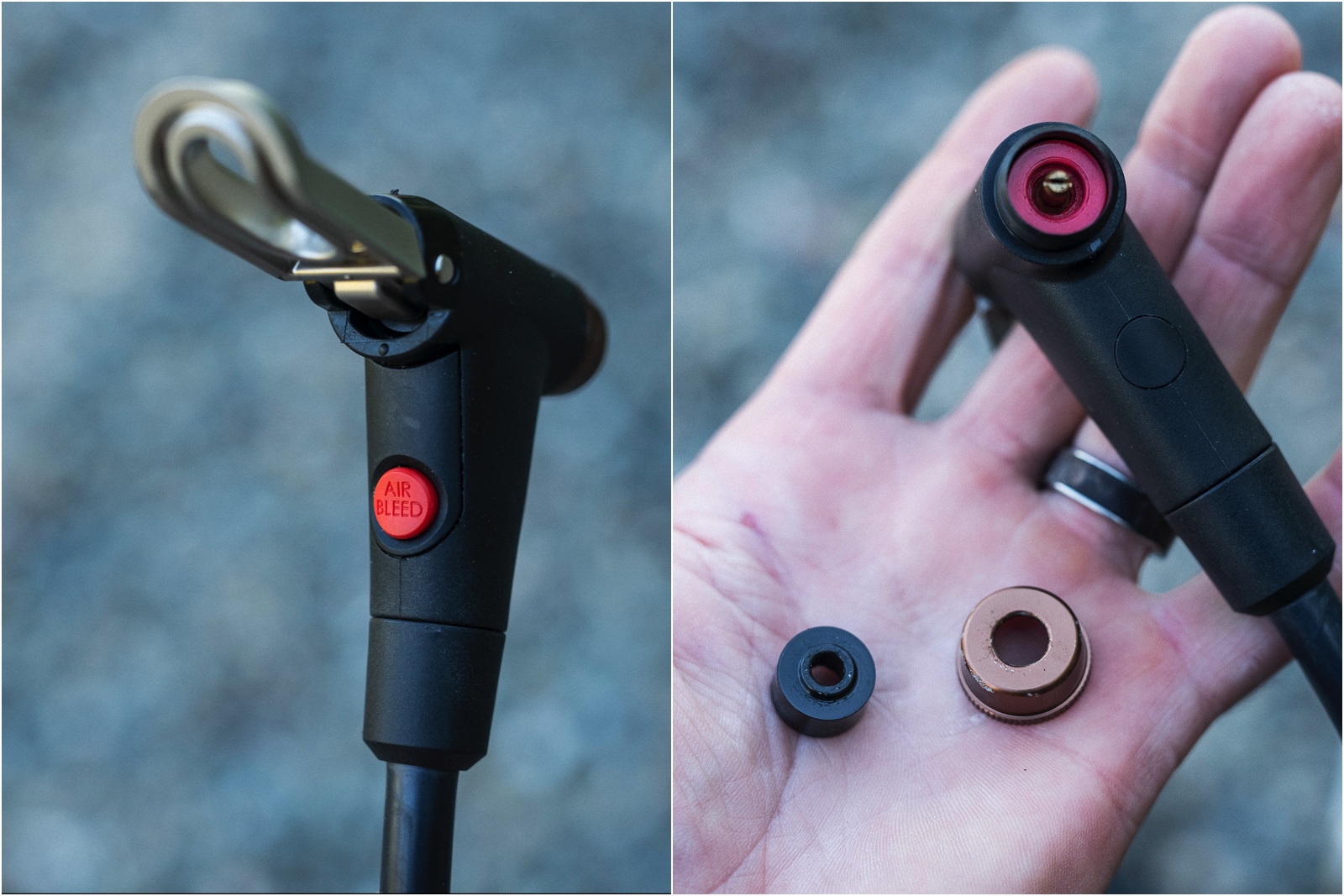 On the left above, you can see the air bleed port, and on the right – the head taken apart. To swap between presta and schraeder you need to unscrew the brass colored cap and flip a rubber fitting around.

While the whole two-in-one burst tank/standard pump makes things slightly more cumbersome, it’s easier to keep it all together, and the fact that the two are connected means that there is less to think about if you’re traveling. If you’re racing, or on a long trips with some inevitable tire changes and no air compressors in sight, it is a great option. Additionally, once you’ve flipped the valve to inflate a tubeless tire and the air has come out, you can just start pumping to top it off and get it to your desired pressure. As far as efficiency goes, it takes about 43 pumps to inflate the chamber to the point that it’s ready to seat a tubeless tire. So far, I’ve had a 100% success rate with seatings, testing it on 3 different wheelsets and 6 different sets of tires. Only on one stubborn wheel/tire combo, I did need to remove the valve core to maximize air flow and get the tire beads to lock into their rim channels. 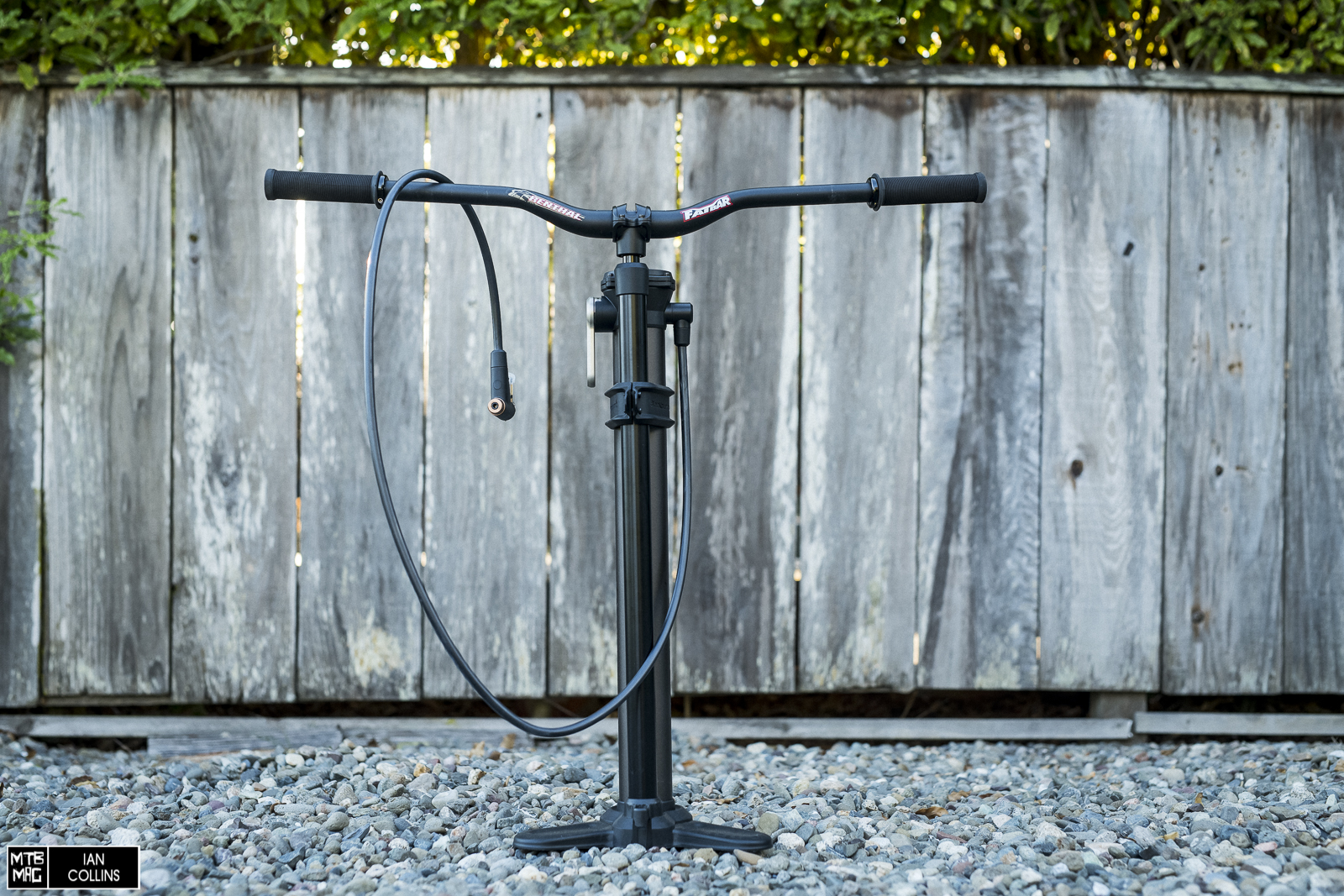 The pump is quite comfortable to use in stock form, but for fun, I slapped my own bar and grips on…I found that a full 800mm wide bar makes things a bit weird, although it is good exercise. Ideally, I’d take a beat up old handlebar that I didn’t care about and cut it down some, bringing it closer to the narrower width of the stock bar that Blackburn spec’s the pump with. As far as the gauge is concerned, there were a handful of occasions that I filled my tires to exactly 30 PSI and headed out to the trails…Once I get to the trail head, I typically set my exact pressure with a digital pump. On a handful of occasions, that pump confirmed the accuracy of the built in gauge – it’s spot on. The hose is rather long and exits the pump’s body higher up, which worked out nicely when inflating tires while my bike was in the repair stand. Lastly, as far as mechanics go, the base is quite sturdy and the action has remained smooth without any annoying drag or excessive play in between the two shafts.

The Blackburn Chamber Tubeless pump comes in toward the higher end of the price spectrum for pump/burst tank combos but that price however is pretty well justified by higher quality moving parts, a lifetime warranty and the catchy, but still rather cool option of running your own bar and grips. In the long run, I did prefer this combination style setup over having separate pump and tank units. The longer than most hose and bleed valve are also nice touches. All in all, a well thought out, nicely made setup that should last quite some time and prove its worth over the years. 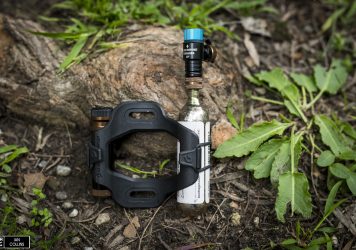