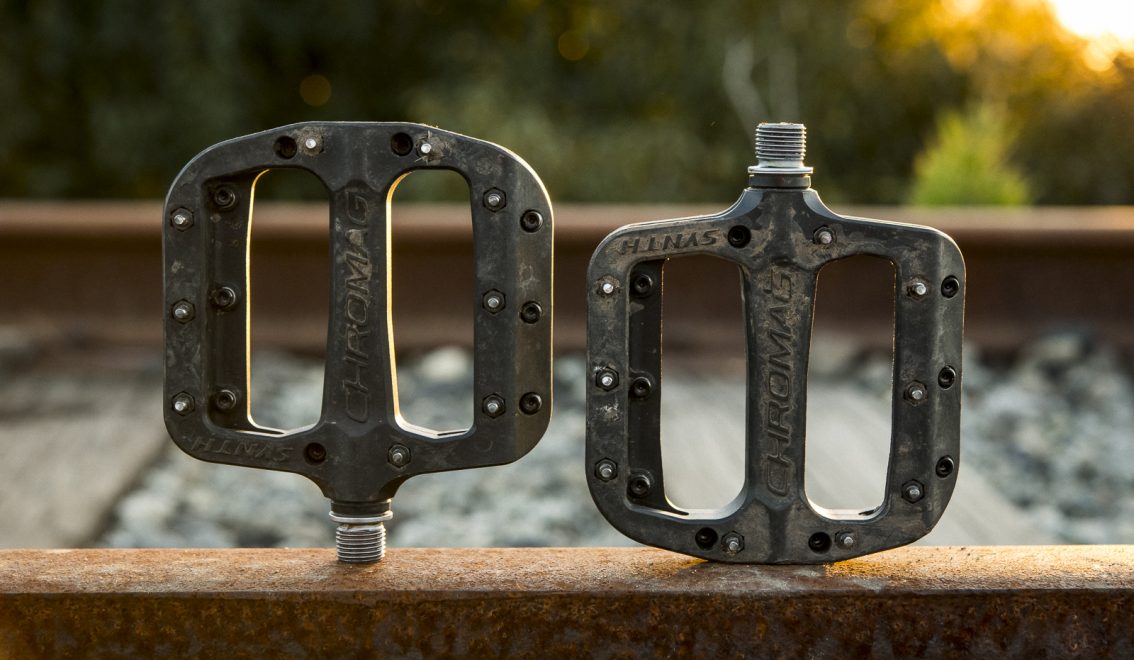 Not all that long ago, Whistler based brand Chromag jumped into the plastic pedal game with their new ‘Synth’ pedal. Modeled after Brandon Semenuk’s signature ‘Contact’ pedal, they take on a similar outline and come in at about the same weight, but at roughly half the price. Plastic pedals in general are more economical and seem to absorb impacts better than aluminum. One point of interest with the Synth is that Chromag offers replacement plastic pedal body sets for just $15 USD/pair. Follow along to see how they’ve worked out through the long haul. 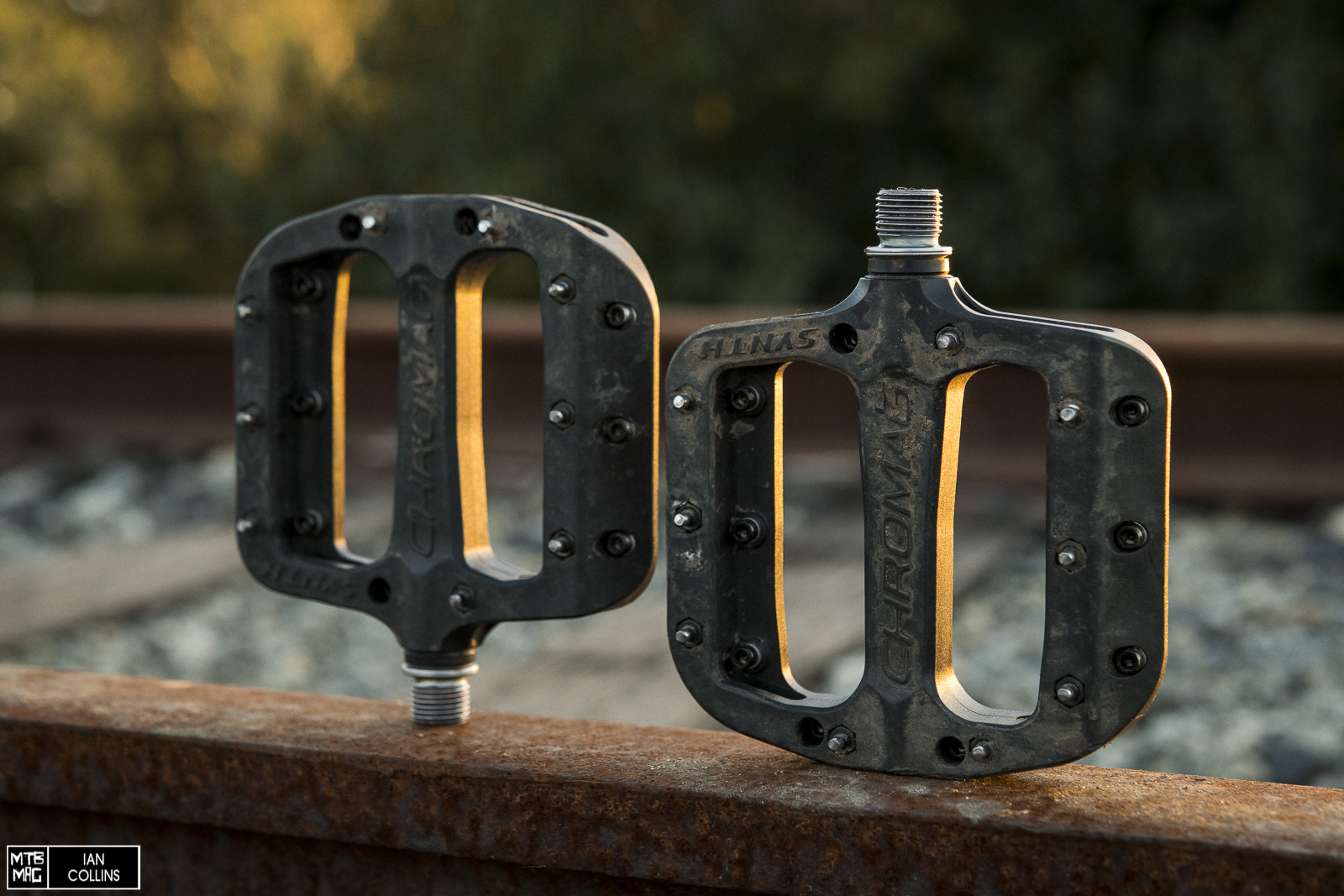 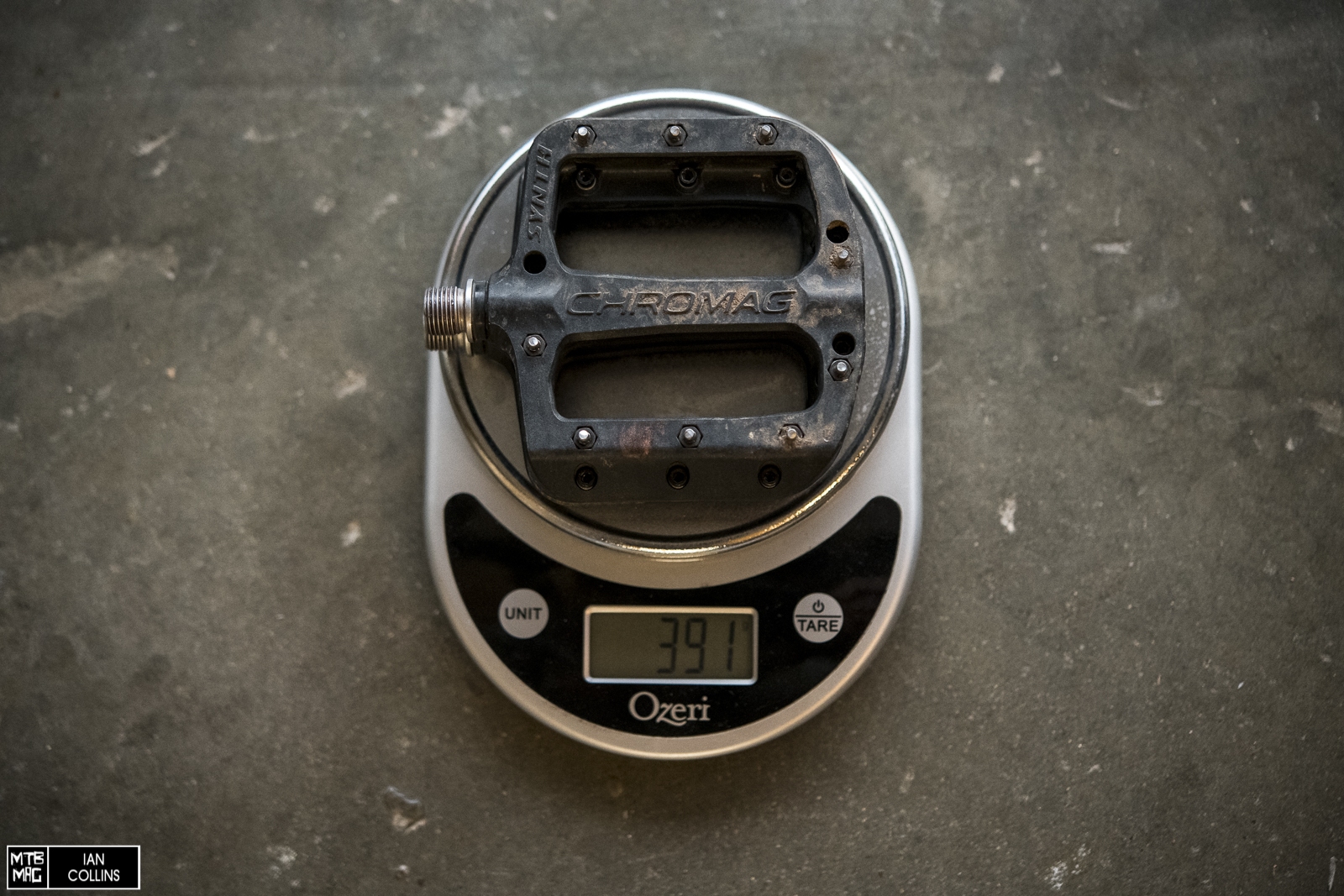 Chromag’s claimed weight is 380 grams/pair. These came in at just a touch over that, but keep in mind there is a few grams worth of dirt caked into them. As for the size, these are pretty middle of the road at 110mm x 107mm. Most of the grip you’ll find will come from the pins, rather than the pedal body – aside from this raised lettering, there isn’t really much in the way of traction coming from the pedal body itself. 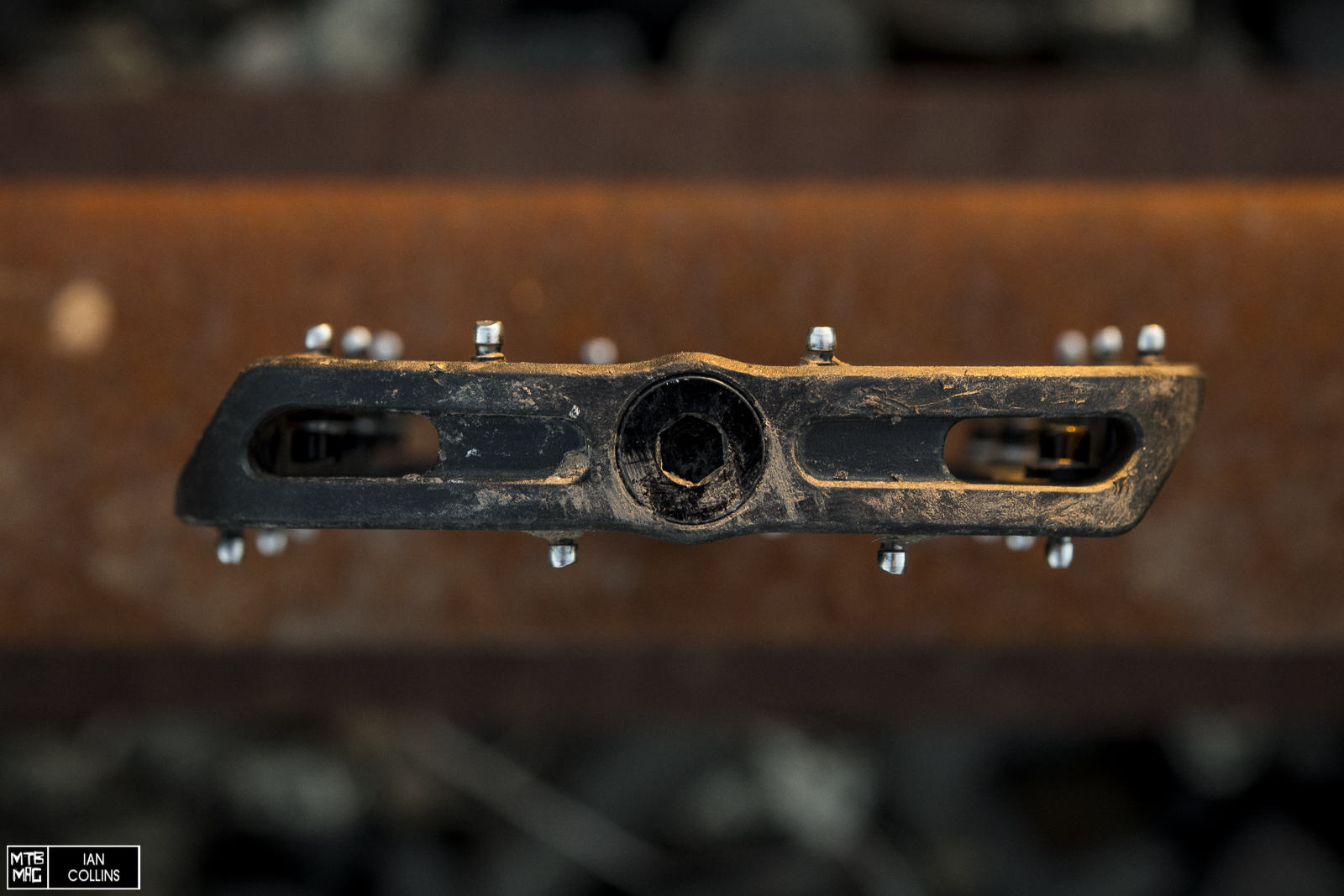 The side view above reveals the concave shape of the pedal fairly well. There are 9 replaceable pins per side. 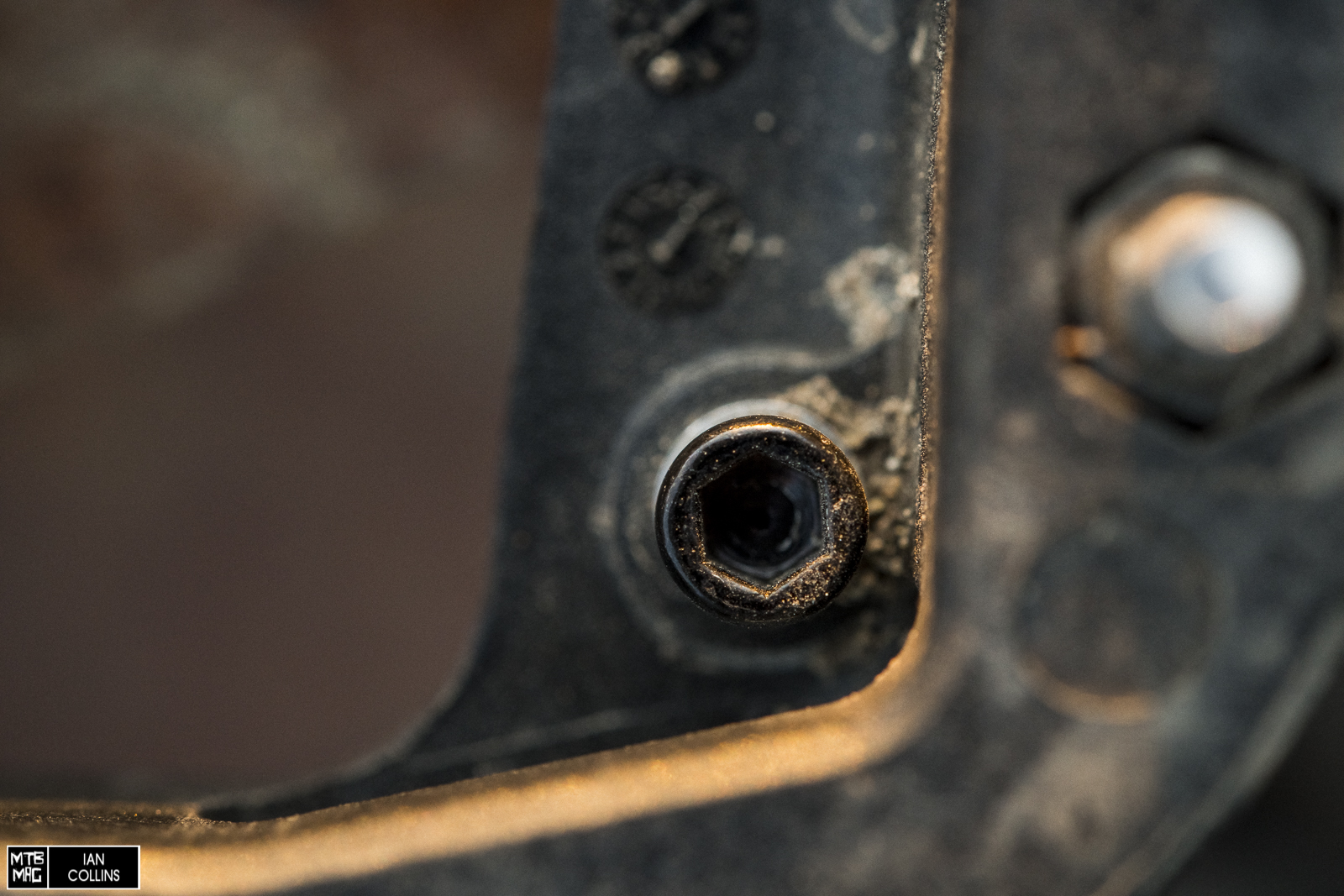 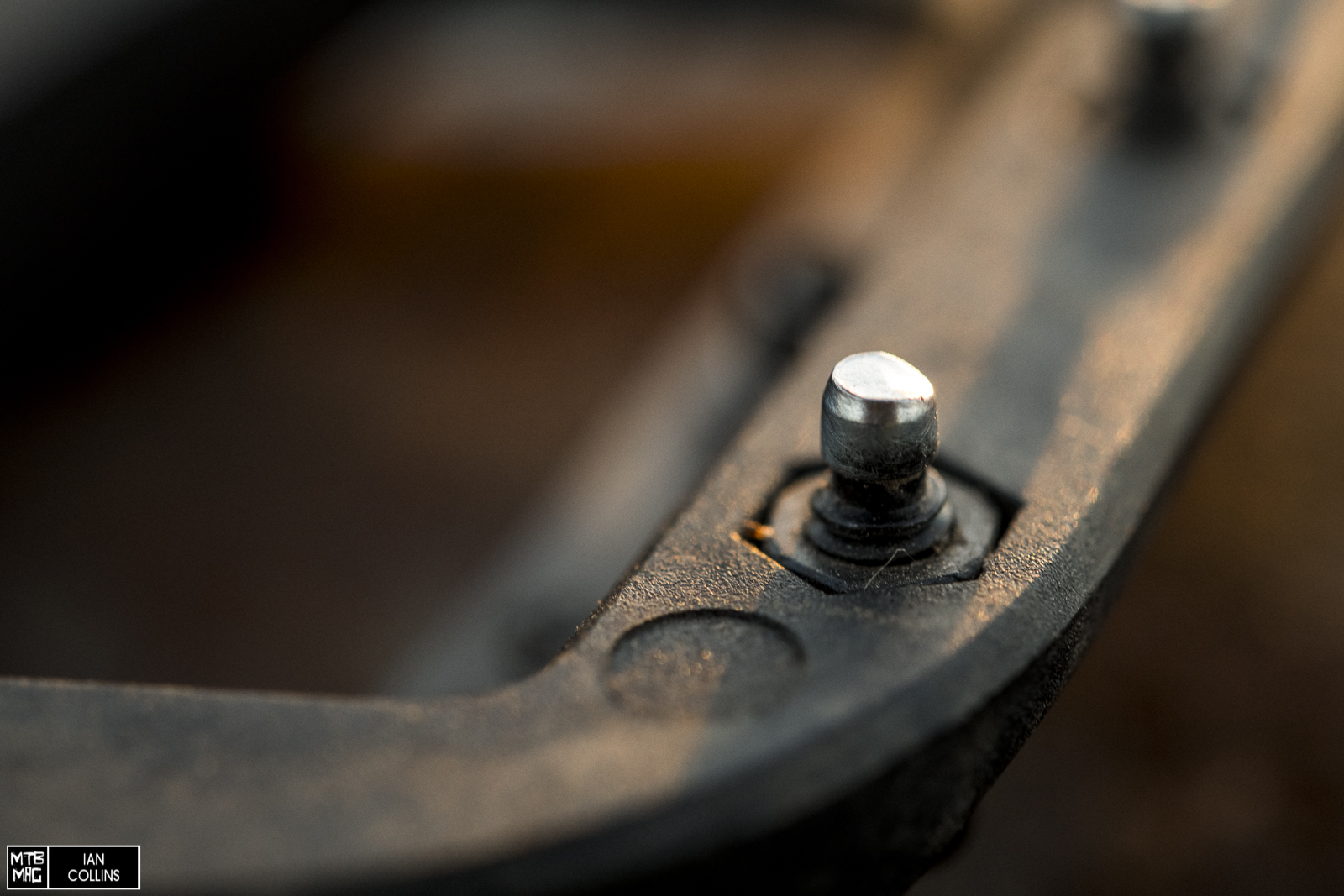 The pins have an interesting shape to them and thread in via a jam nut that sits in the pedal body, that way you won’t strip them out.

I’ve used the Synths for most of my flat pedal excursions this winter and typically have ridden them with a pair of Etnies Marana shoes. I’ve spent time riding them on my trail bikes, e-bike and also a little bit on my Ticket-S. These come in toward the slightly smaller end of what I’m looking for in a flat pedal, although I did find them to be plenty supportive. On trail, the traction was right in the sweet spot. That would be loosely defined as somewhere in between “too much shifting around” and “too hard to move your feet when they end up in the wrong spot”. The former I would associate with a pedal that is low on traction and/or design quality, and the latter I would associate with a pedal like Chromag’s ‘Dagga’ – Chris Kovarik’s signature pedal, which could be savagely over the top for some. 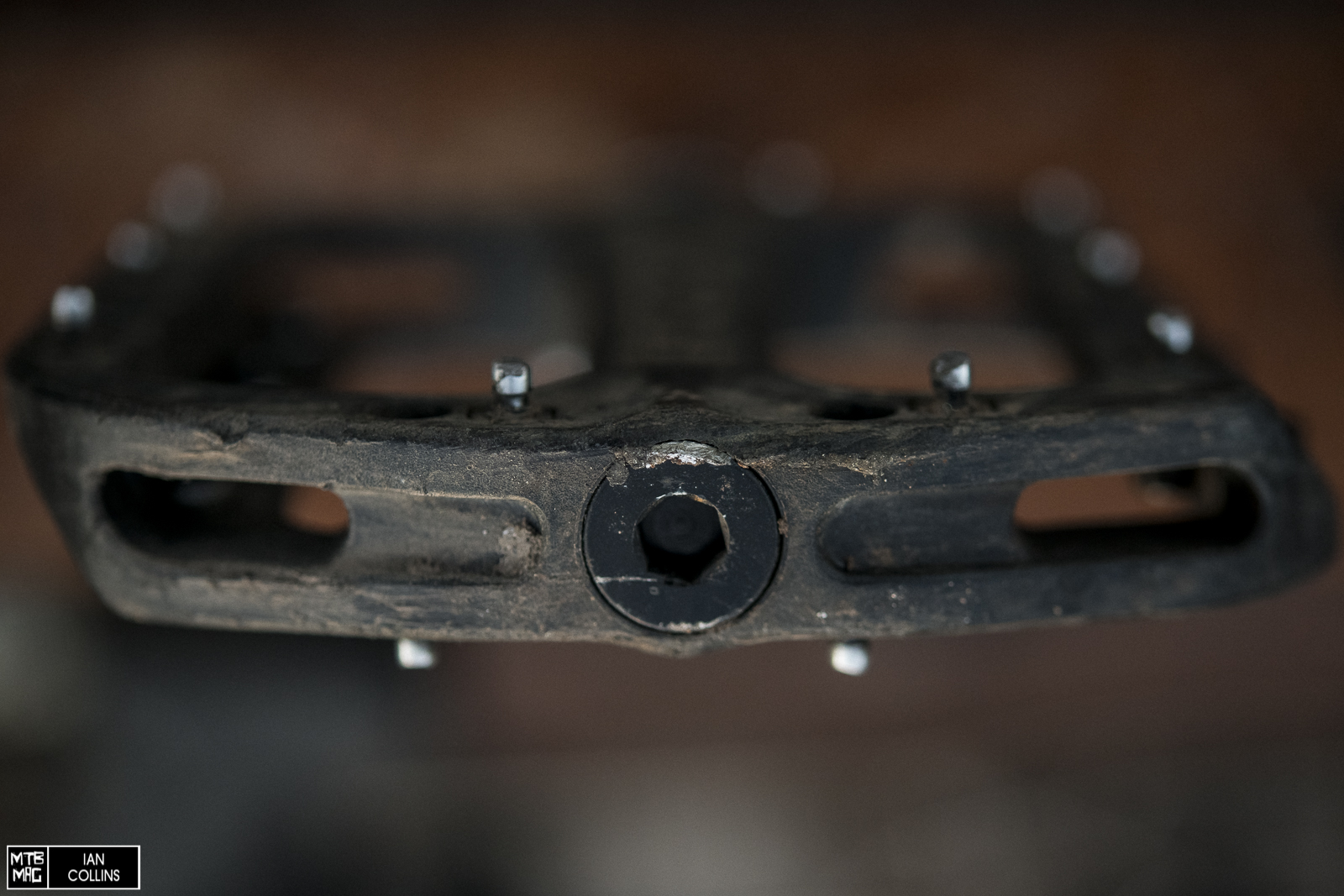 As far as the shape is concerned, I generally prefer quite a bit of concave so I did get along admirably with the Synth and found it very natural and effortless to find that “home spot” for my foot placement. The fact that these are modeled after Semenuk’s Contact pedal means that they sit inboard toward the cranks for more “trick control”. I don’t exactly do any tricks on my bike and the only time I’m upside down is when I crash. So I did find this “inboard” feel a bit strange at first, but got used to it rather quickly and surprisingly didn’t find any abnormal wear on my crankarms due to it. Touching on durability – while the Santa Cruz area isn’t known for being rocky, I did have a handful of encounters which the pedals seemed to glance off nicely, without taking on too much surface damage. As far as the bearings are concerned, I’ve found no play has developed after a moderately wet winter and plenty of hosings. In good form, Chromag offers rebuild kits and spare axles on their website. In terms of axle strength, these survived Brandon’s Rampage win and most of his insane filming over the last year without bending, so I doubt normal folks will have any issues.

I’m definitely not afraid to admit that I like plastic pedals in general and the Synths are no exception. They might not have the same luster as their aluminum counterparts, but do come with a much lower price tag attached, and at about the same weight, without any compromise to ride quality – or durability for that matter. One thing that sets these apart from some of their competitors is the fact that they’re less “disposable” and have spares easily available, should you need them. 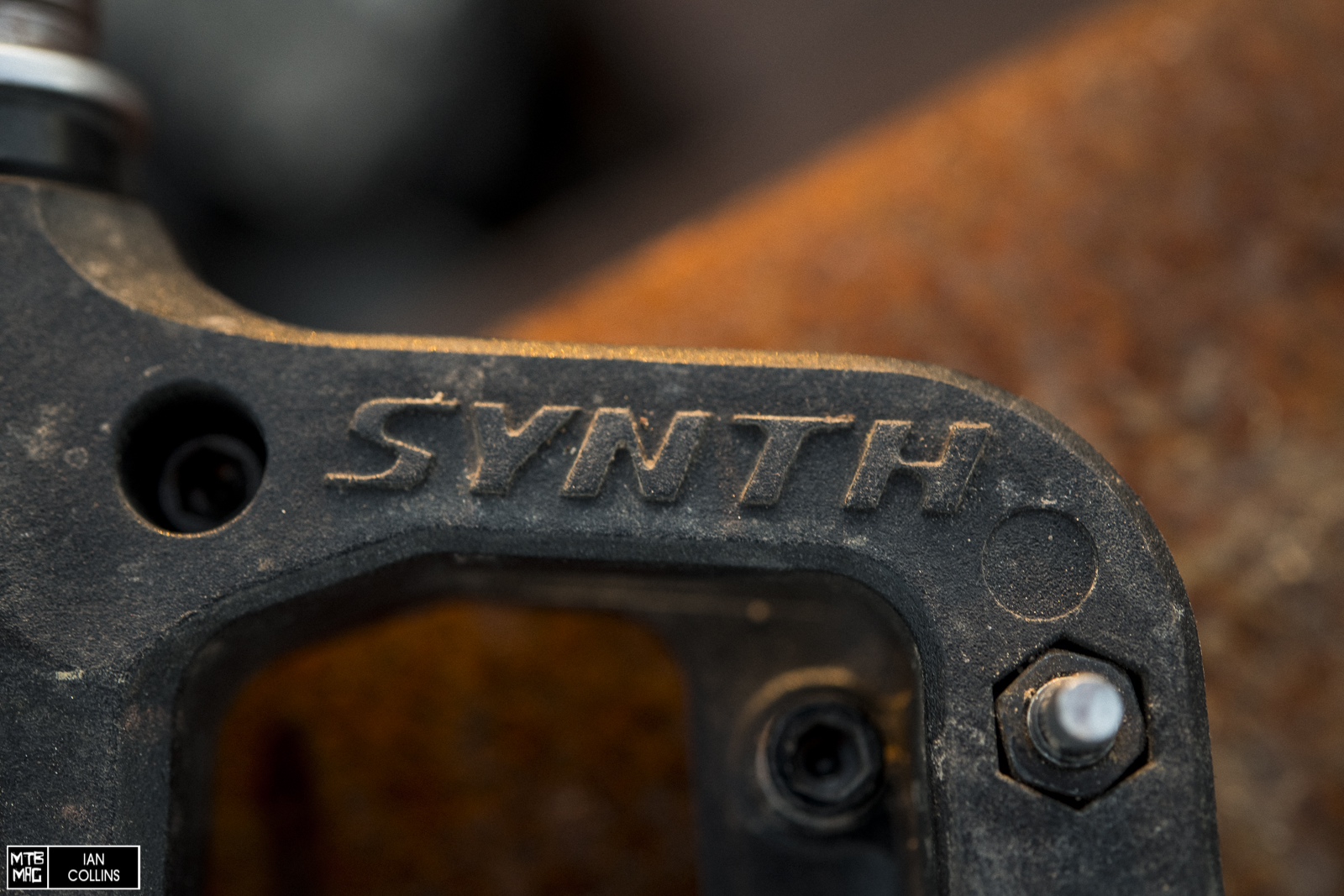 My only minor complaint was having to get used to my feet being a bit closer to the cranks, which turned out to be a small matter. Aside from that, the feel and ride quality is up there and the size is pretty agreeable, in the middle – some might prefer larger or smaller offerings, but these are safe. All in all, the Synths are really good pedals for the money, and the availability of spare parts makes for nice insurance. 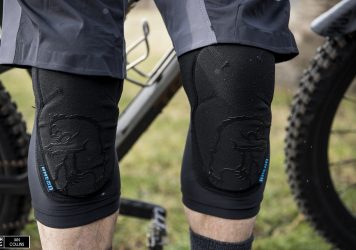 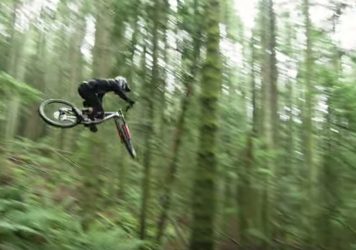 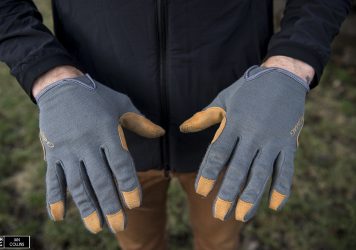