Few brands have offered as many varied configurations and options for multi-tools over the years as crankbrothers. Their foldable M-series line has been around for quite some time now and is offered in a wide array of options – M5, M13, M,17 M19 and M20 – with the number indicating how many individual tools are included. The M13, tested here and M20 are new offerings whose main selling point is the plastic clip on storage for tire plugs and a spare chain link. I’ve been using it regularly for the past few months to see how it passes muster… 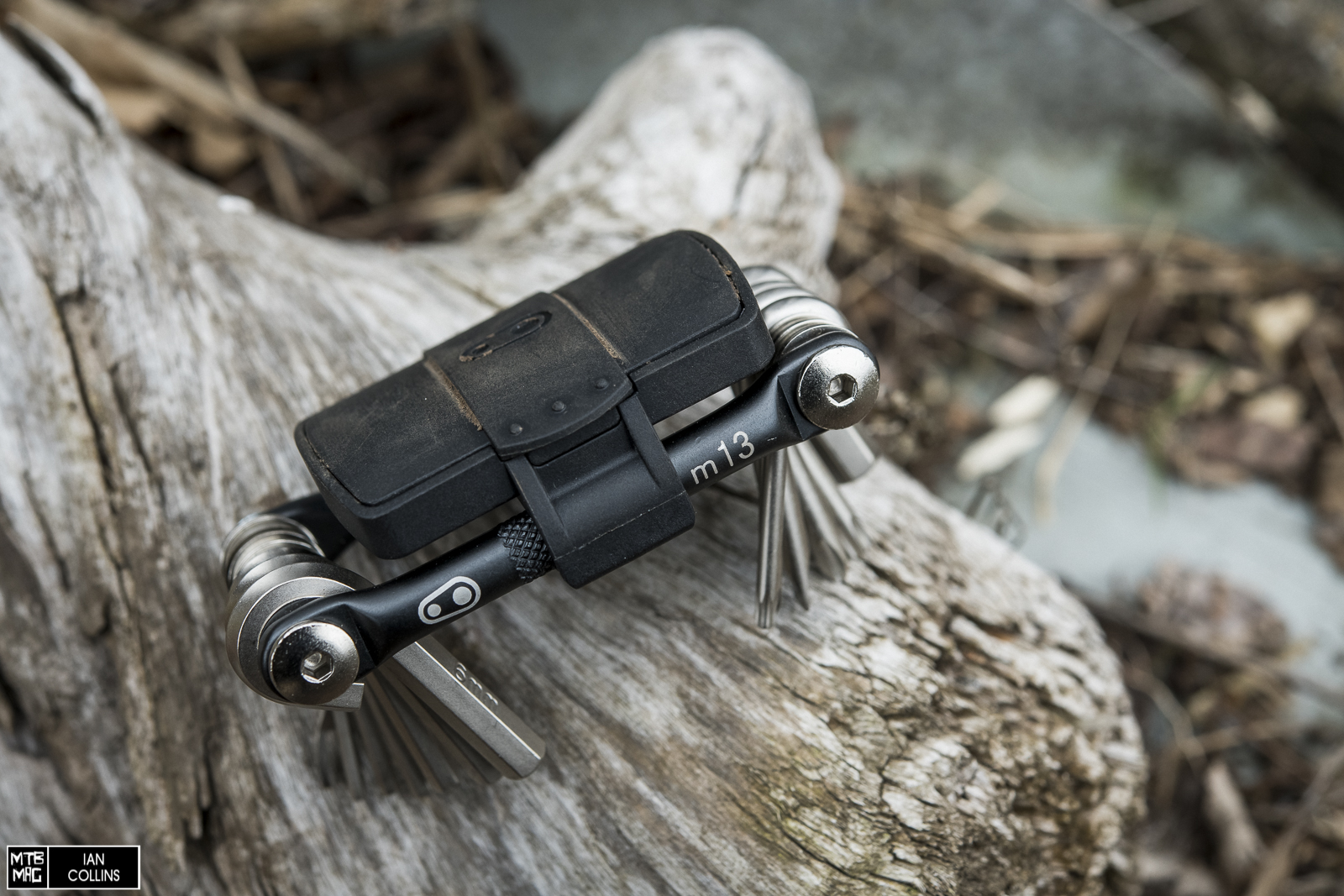 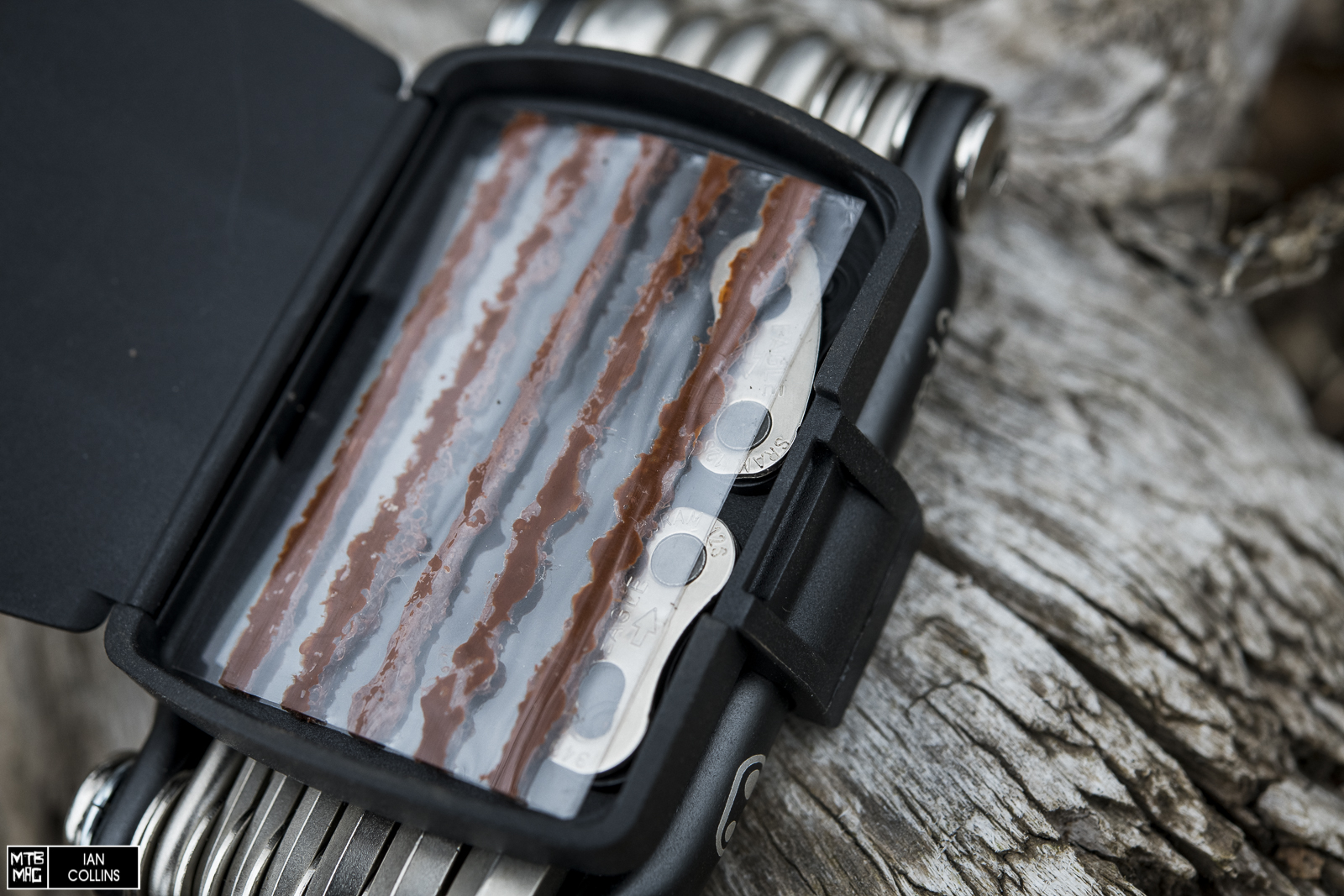 The news with the M13 is its storage department, which features spots to store a chain  master link and ships with 5 tire plugs. 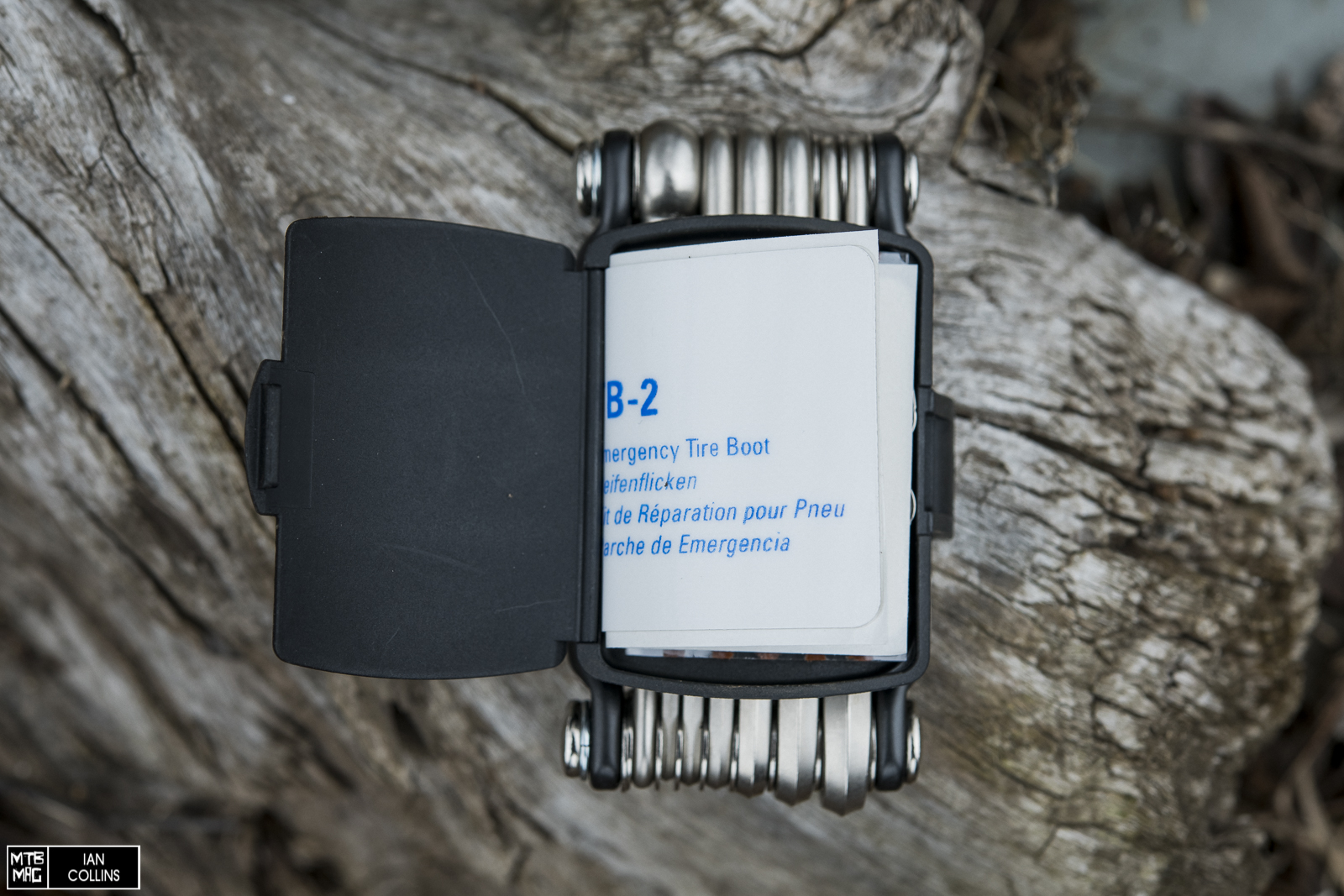 I found I was also able to fold a life saving Park tool TB-2 tire boot in half and fit it in the storage without issue as well. The point being, there is wiggle room for that, some tape, or a few dollars as well. 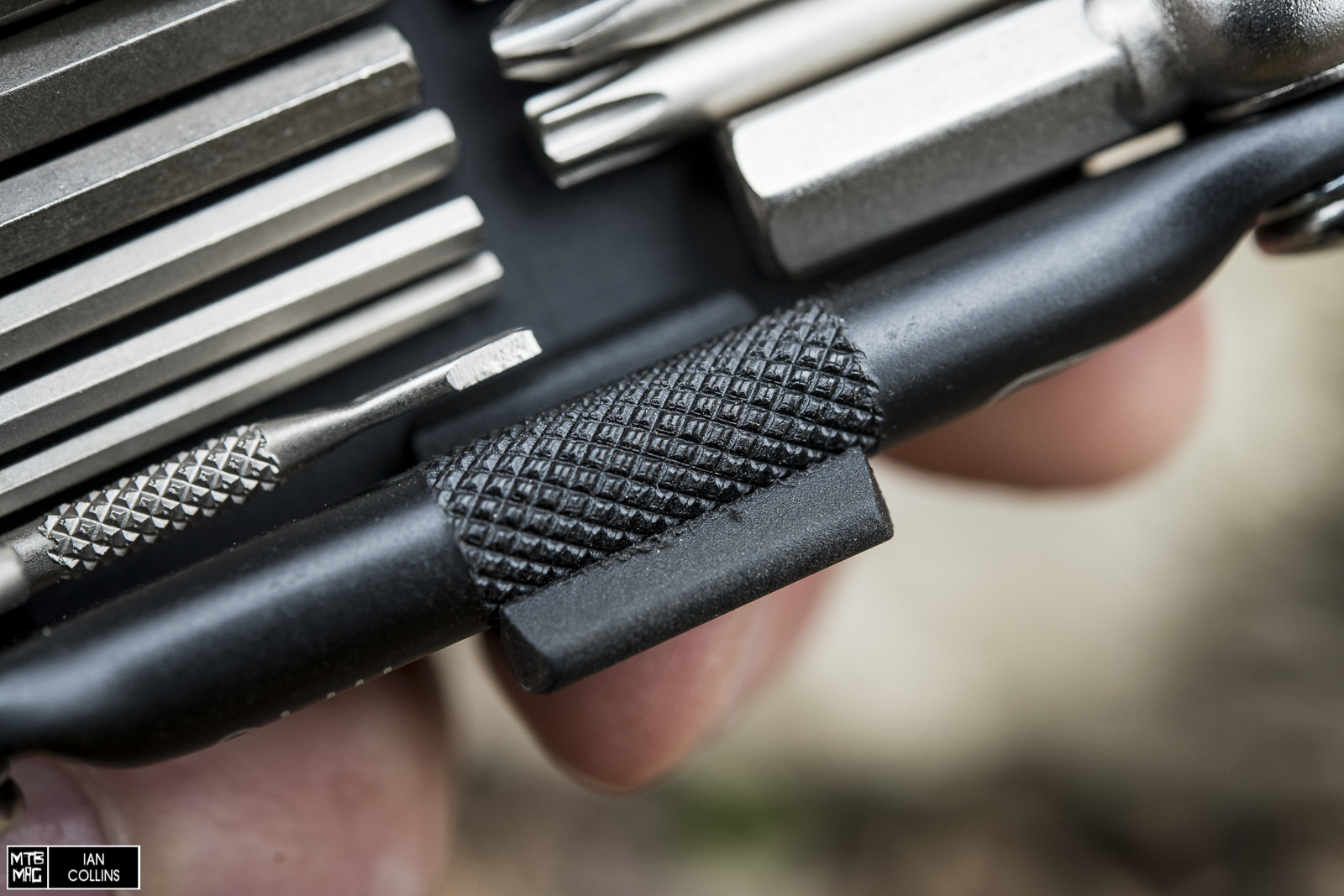 The knurled side sections have always been around for grip, but they also make for the perfect surface for the storage to clasp onto. Thus, I had no issues with it popping off. 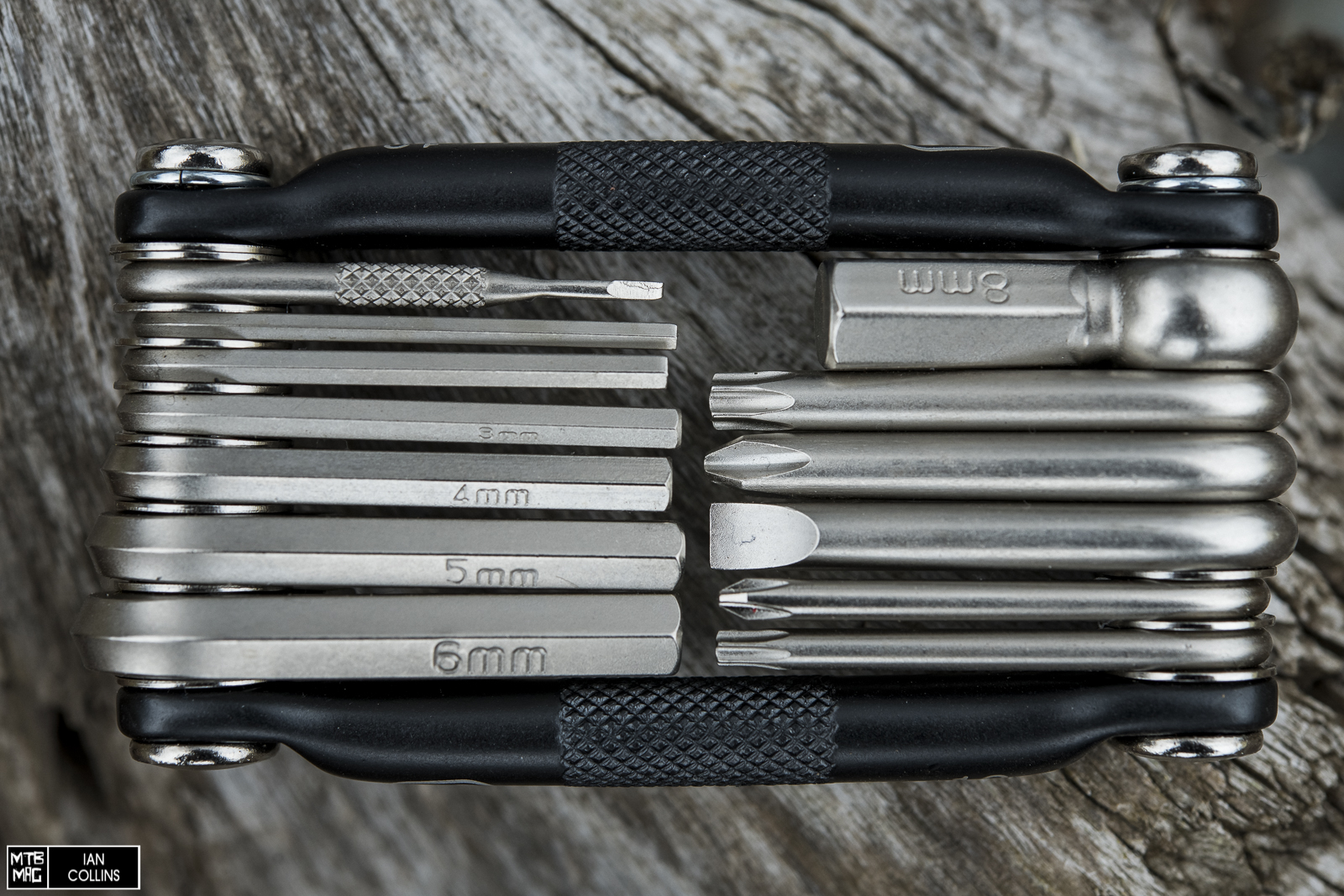 The tool, and all 13 of its features up close and personal, sans storage. 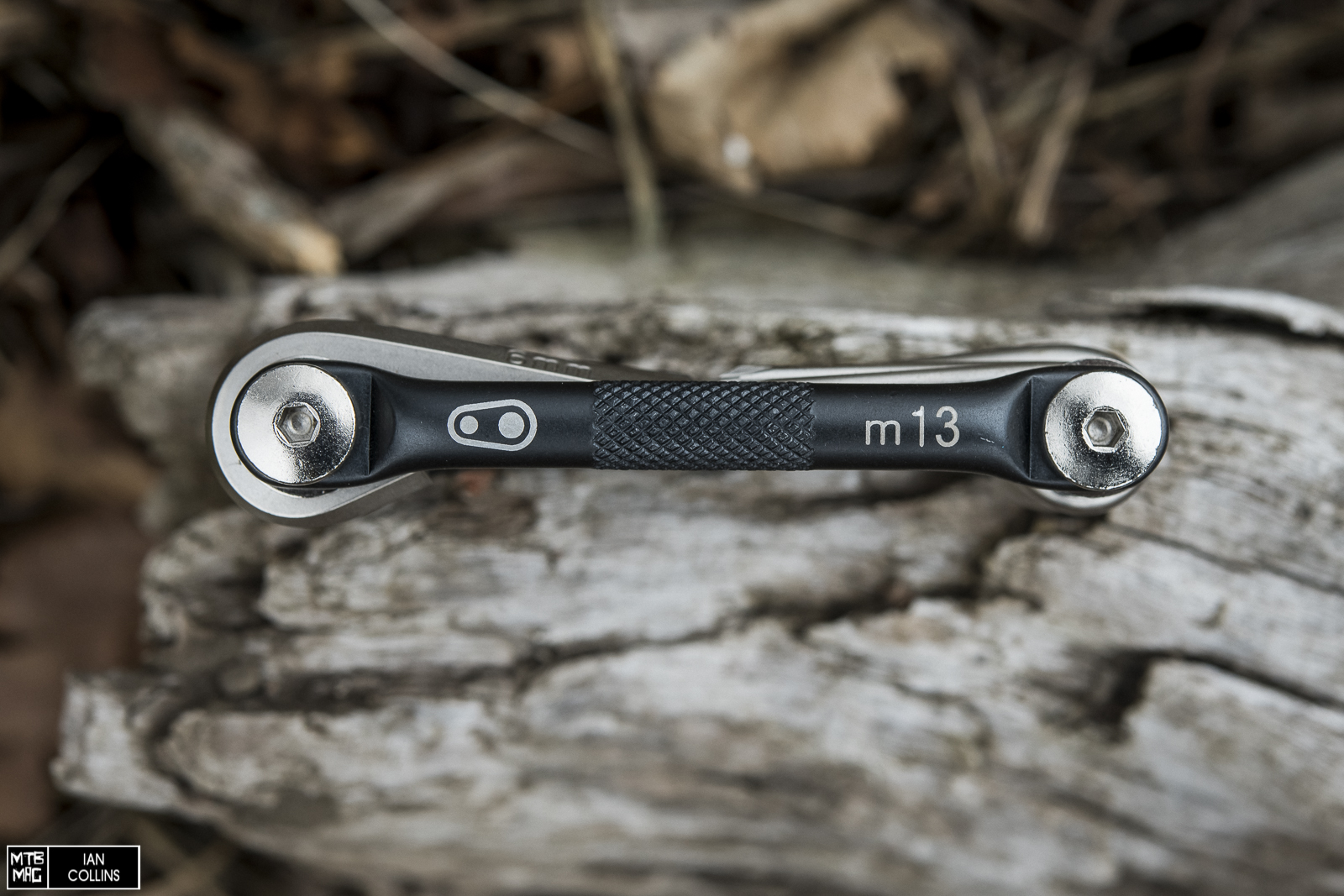 You don’t have to use the storage section – in fact you could leave your plugs and a spare link elsewhere. If you go that route, the M13 is extra low profile as you can see above. 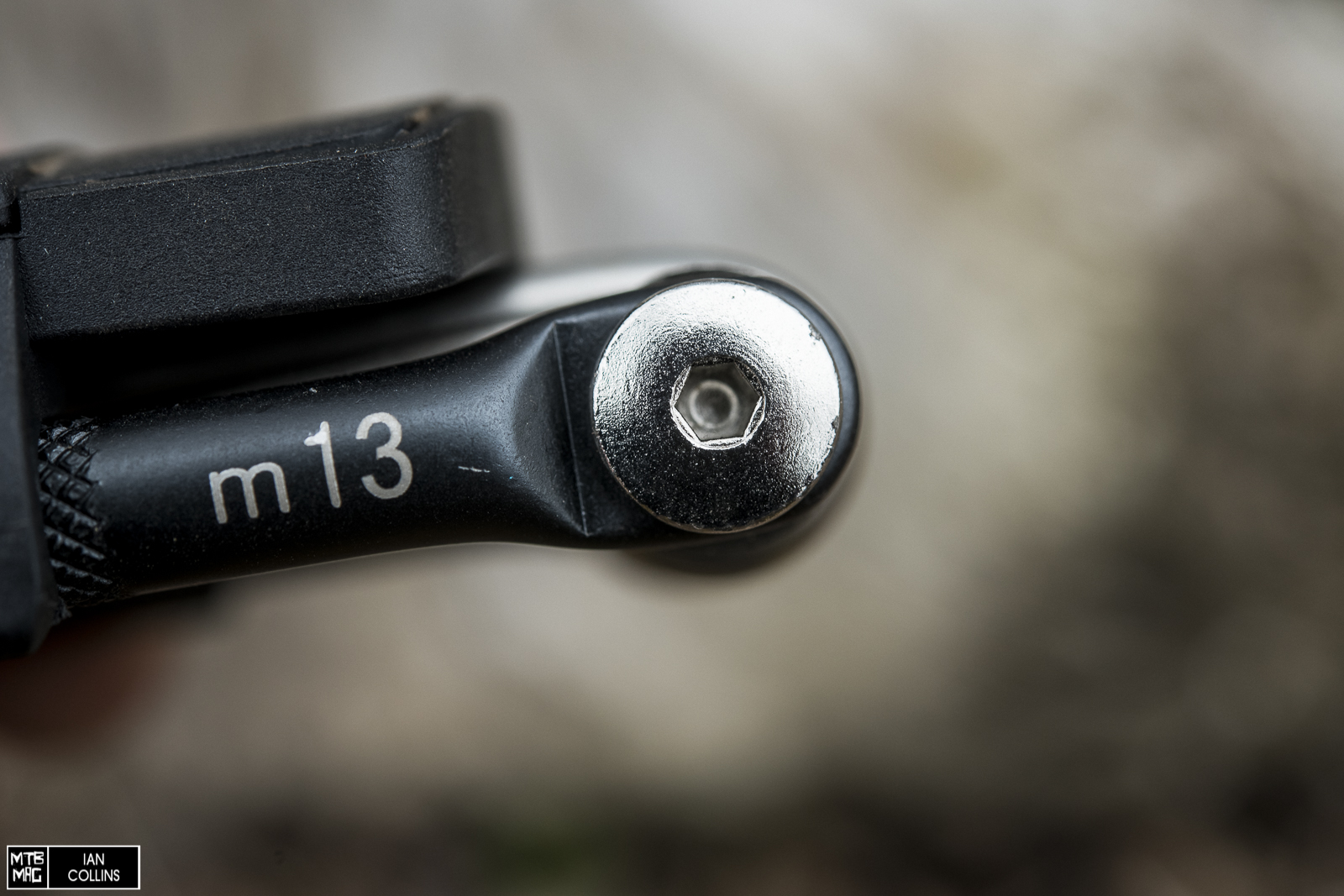 Over time as you open and close the bits inside the tool it inevitably will loosen. Like most multi tools it can be cinched back up with the allen hardware on the hinges.

The M13 has a good spread of tools for most of your trailside repairs. Compared to the M19 – my all time favorite multi tool – which is practically a toolbox in your palm, it focuses more on tire repair with the tire plug tool and its storage section. In doing so, it forgoes a chain tool, 8mm and 10mm hex bits and spoke wrenches. The M20 essentially combines the best of the M13 and the M19. In any case – and this goes for all of the M-series tools – I love that the tool bits are high tensile steel. They wear extremely well and can handle some serious abuse. Additionally, the tool’s body is very sturdy and rigid. Over the years I’ve bent many a multi-tool loosening stubborn hardware and removing pedals, but never have I so much as thrown off my M13 or my M19. With that in mind, this tool does run a hair on the heavy side if you’re a gram counter. Interestingly ours came in 9 grams lighter than claimed though. Anyhow, I rarely find myself using screwdrivers trailside, but occasionally they can be handy. The same goes with the T10 – unless you need to open a master cylinder on a brake and reset dragging pads, it won’t see much use. The rest of the tools however all saw plenty of action. 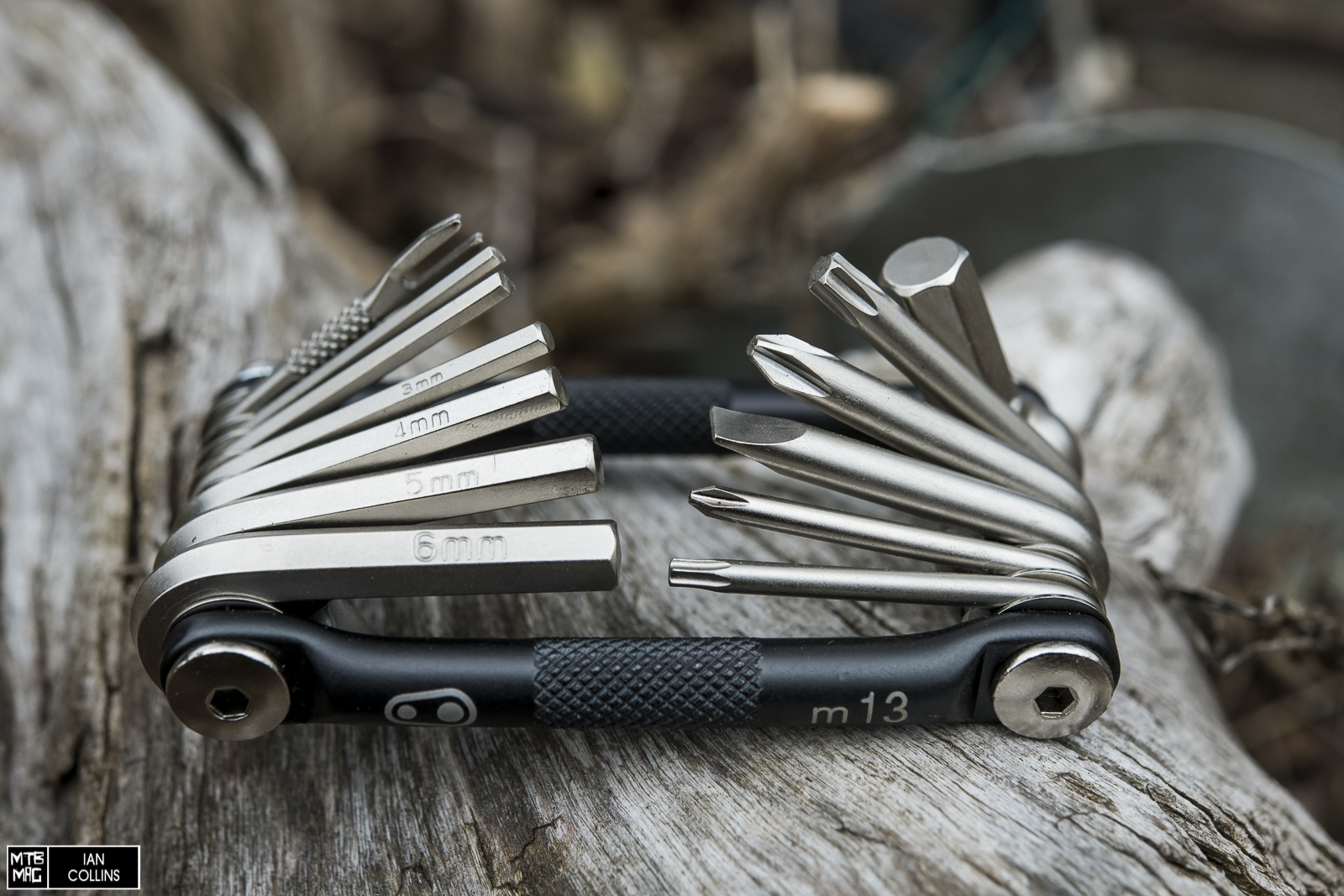 One thing I appreciated with the M13 was the knurling on the sides. When stuck wrenching on a bike trailside in the rain, the last thing you want is for the tool to be slipping in your hands and this was never an issue. As for tire repair, I didn’t flat during the course of my testing (I rarely do), but speaking of knurling, I think it was wise to leave the body of the tire plug with some traction, which makes it easier to grasp its skinny arm. The tongs seem a bit broad, but if you had to, you could use the smaller phillips head screwdriver to open up a puncture and make room for it.

Much like its predecessors, the M13 is a great multi-tool that is tough as nails and will last for years. Yes, there are lighter tools out there, but I haven’t found one that’s as durable as the M19 that I’ve been using for years and years. Therefore, by extension there isn’t anything that I know of that’s as tough as an M13 – at least not yet anyway. As a consumer, my only hangup would be deciding which of the three tools to go for – M13, M19 or 20? To each their own, and for about $26 – $39, you can’t really go wrong with either…especially given that they all boast a lifetime warranty.

[Video] Next Peak – No Other Way