The focus of this review, unlike usual, is not a specific product but a new technology, the Flex Spherical MIPS system that we can now find on some helmets such as the Bell Super DH, the Bell Super Air R and the Giro Manifest in the MTB segment, as well as other models of the same brands for the road segment. A technology that we of the MTB-Mag editorial staff believe to be so innovative as to mark a turning point for the future of MTB helmets and more. For this reason we decided to dedicate a specific test to the Flex Spherical MIPS. 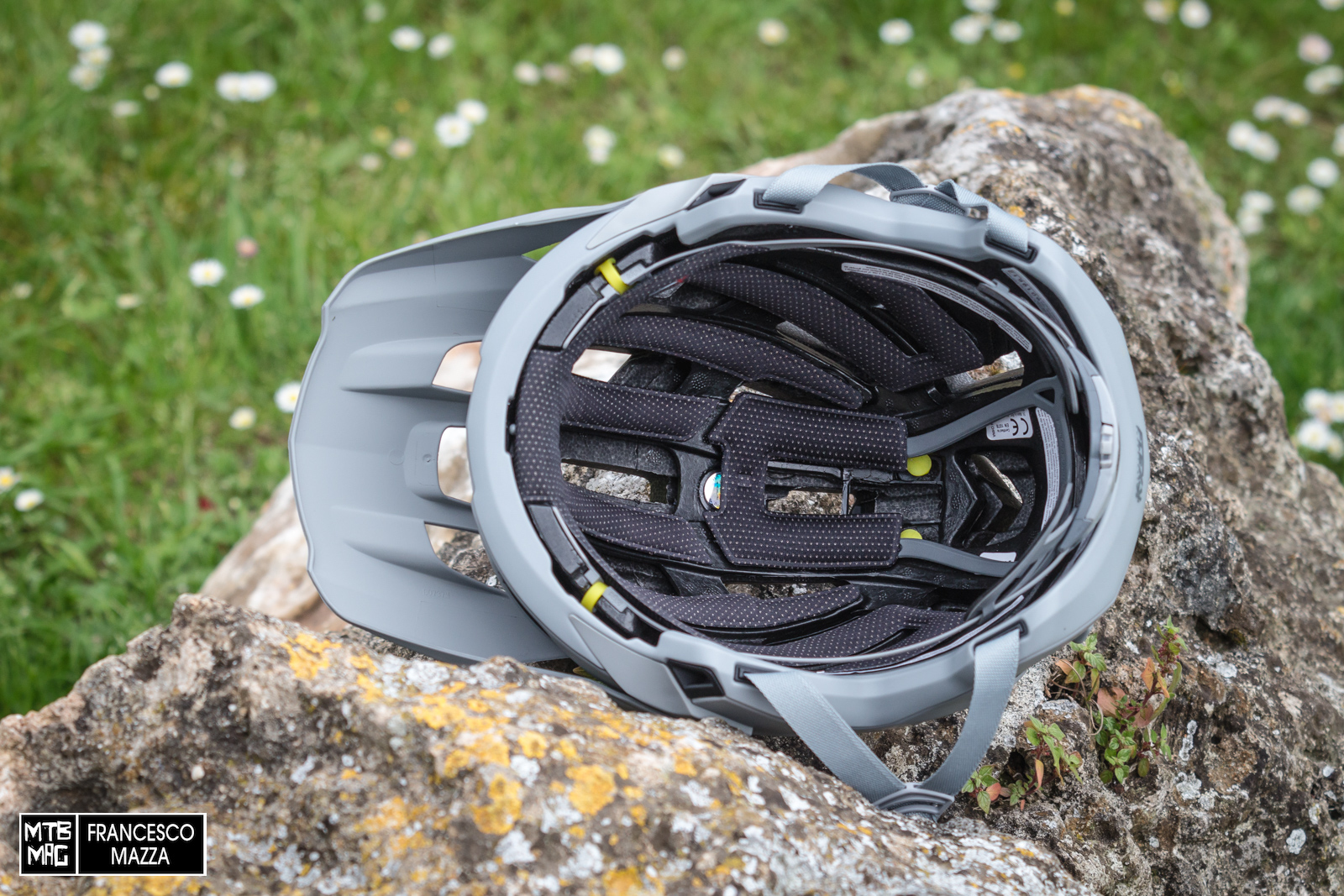 I tested the Flex Spherical MIPS system using the Super Air helmet without the chin guard. It is their second helmet model to have adopted this system after the Super DH, subsequently used by Bell also on their top of the line motorcycle helmets. The Flex Spherical system was born from the close collaboration between Bell and MIPS as an evolution of the standard version of the Multi-directional Impact Protection System. A collaboration on which Bell has invested heavily in order to integrate the MIPS system into their products in the best possible way. It’s important to remember how the Californian brand Bell is historically and intrinsically synonymous with helmets: in the 1950s they invented the helmet as we know it now while in 1968 they created the first full-face in history. 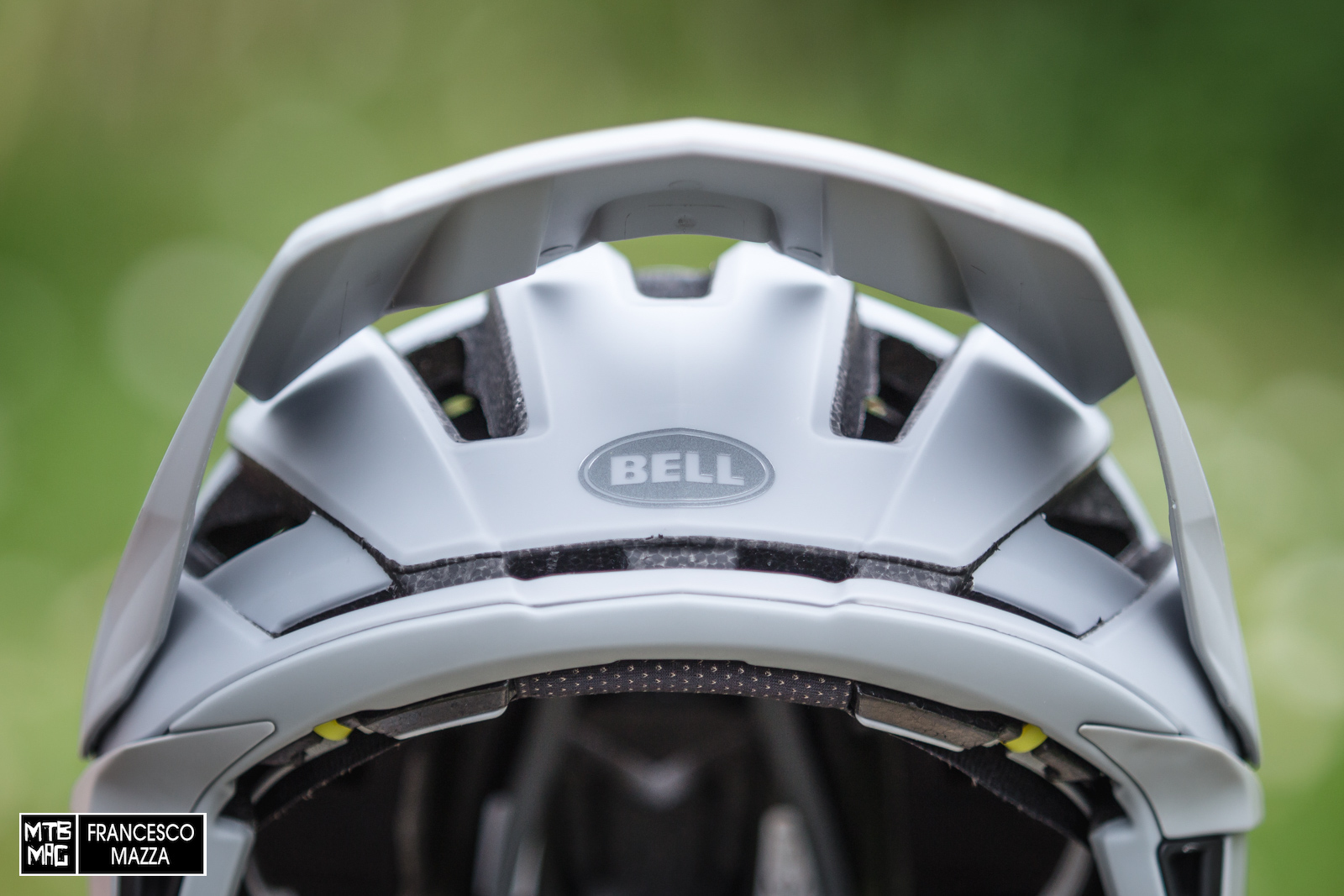 For those who are still unfamiliar, the MIPS system, acronym for Multi-directional Impact Protection System, is a brain protection device that now equips most quality helmets, and not only for MTB. It is a thin shell located between the head and the inner shell of the helmet, fixed to the latter by means of elastomers, which is able to slow the rotational energy that is generated in most impacts and which is transferred from the helmet to the skull, thus acting as a further preventative measure for avoiding concussions. In the photo below we see how this system has evolved thanks to the collaboration between MIPS and Bell, radically integrating the system inside the helmet. On the right the standard version of MIPS. At the center is the first version created for the Bell Sixer, where MIPS is integrated into the 360° locking system of the helmet. On the left the Flex Spherical, where MIPS is an integral part of the helmet itself.

An integral part since in the Flex Spherical we no longer find a thin additional shell between the helmet and the head as for the MIPS standard, but it is the inner shell itself that performs the function of the MIPS. This is possible because helmets with Flex Spherical MIPS are equipped with two caps, one superimposed on the other as in a sort of spherical joint, connected to each other through four strong elastic anchors, clearly visible in yellow color in the following photo, which allow the outer shell to move on the inner one as a floating element. The inner shell therefore remains firm to the head thanks to the 360​​° closure while the outer shell is able to dampen both violent shocks in the event of a fall, better than the standard MIPS can do, as well as vibrations and stresses while riding. 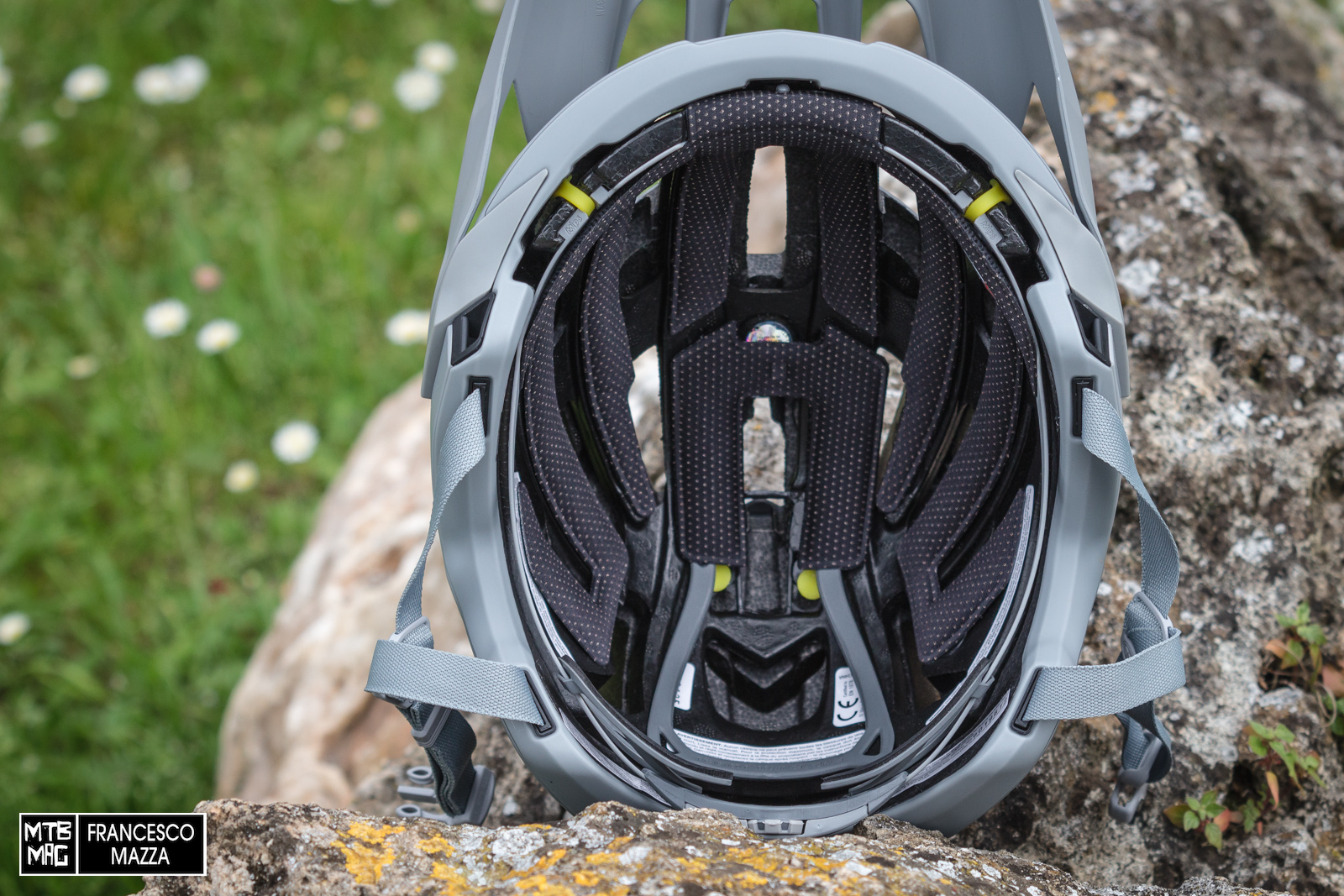 The range of movement of the Flex Spherical MIPS is limited only to what is necessary thanks to a step on each side of the outer shell of the helmet which works as an end of stroke, resting on the inner shell. In the following photo you can clearly see the free space between the inner shell and the step of the outer shell. The more keen eyed will notice that the two caps, both in EPS, have a different color and density. The inner shell is in fact made of a softer EPS, to better dissipate the energy in case of impact, while the EPS of the outer shell has a more solid and rigid formula and is wrapped in polycarbonate coating, being the first material to be involved in a possible impact. The operation of the Flex Spherical MIPS is not only conceptual – its resulting movement is fluid and homogeneous, as the video below exemplifies. The elastic bands allow for good freedom of movement between the two caps in an adequately wide range and at the same time keep them joined together, avoiding the outer one to minimally separate from the inner one. The theoretical aspect of the project is therefore realized by the quality of the materials and the care taken in the construction, which make the Flex Spherical MIPS an impeccable system in all respects.

As far as riding impressions are concerned, it is also worth commenting on the helmet fit, in which the Flex Spherical plays a key role. The double shell construction allows the 360​​° retention system to be integrated right into the internal shell, further reducing any protrusions that could create annoying points of contact and considerably improving comfort. Contrary to what one might think, the presence of two caps does not reduce the ventilation of the helmet, on the contrary, it improves it. This is because the vents are not affected either in quantity (22 in the case of the Super Air being tested) or in size, while the space between the two shells significantly increases the flow of air passing inside the helmet, eliminating trapped warm air quickly. In terms of safety, fortunately I did not test the Flex Spherical MIPS system by falling or hitting the helmet violently, but my perception is of a technologically much more advanced system than the standard MIPS system. What I have been able to appreciate without a shadow of a doubt is the incredible stability of the helmet due to the floating nature of Flex Spherical. Personally I have always hated helmets that move around on my head in rough sections of trail, and therefore must be overtightened to reduce the tendency to slide forward on the forehead or to roll sideways. In this sense, the 360° locking system, now adopted by most helmets, offers greater stability than the helmets of just a few years ago and the Flex Spherical made a further leap forward in this direction. 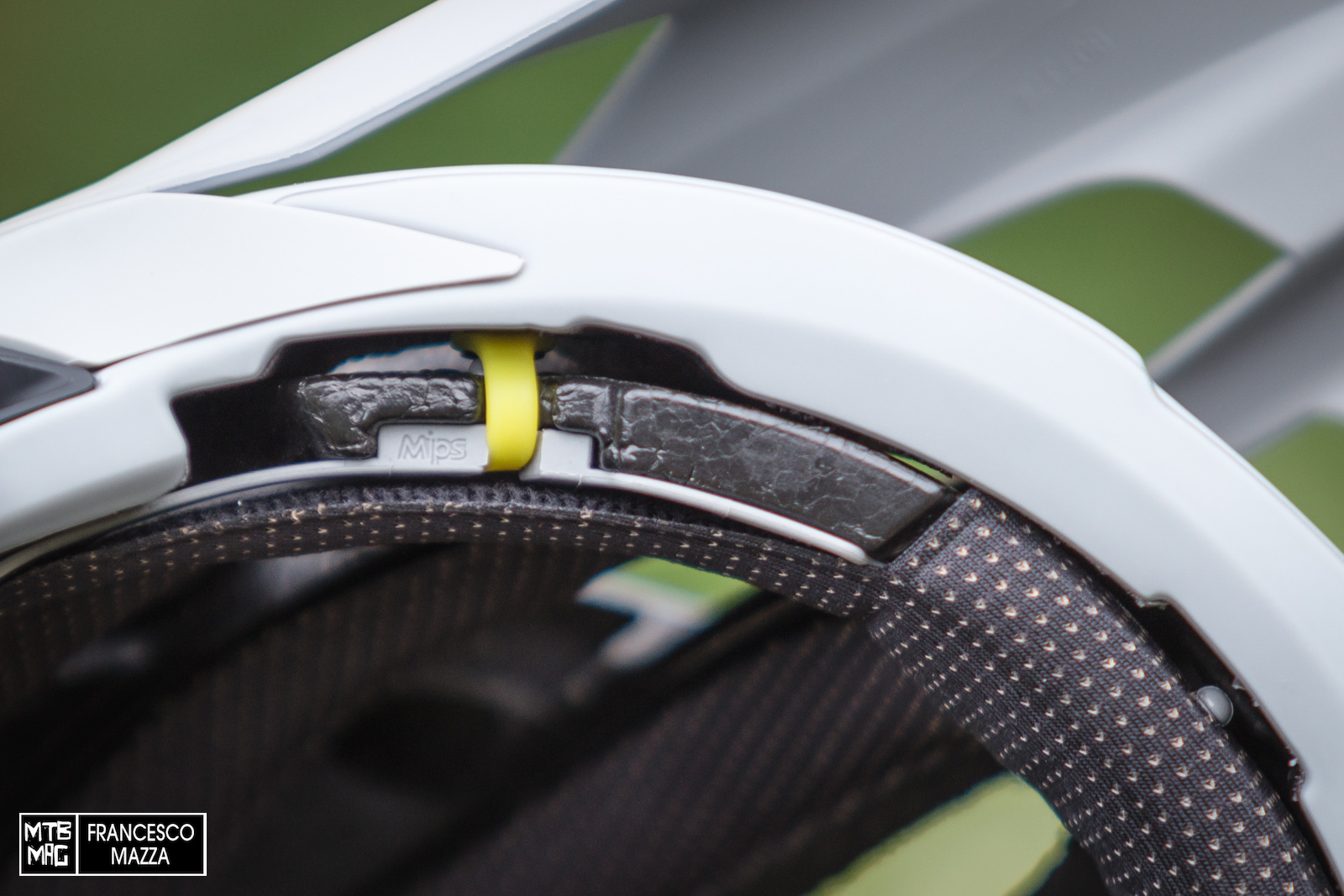 As can be seen in the following video, the inner shell remains motionless on the head even when the helmet is heavily stressed, therefore during riding no slight movement of the helmet is felt, even in the most rough sections, thanks to the elastic bands that effectively stabilize the external shell and isolate its movements in all directions. This allows you to focus more on the riding ahead, literally forgetting you have a helmet on your head. In itself the Super Air has a weight higher than the average of the trail helmets (416g in size M), but thanks to the floating system of the Flex Spherical, the perceived weight, believe me, is much lower than the actual weight.

The Flex Spherical MIPS takes the advantages of the latest technologies developed for the comfort and safety of MTB helmets, such as the 360​​° closure and MIPS, unites them and exponentially improves them in a brilliant solution that seems to come straight out of the future. This system has impressed me in a big way, and I believe that, subject to patents, it could indeed become the gold standard for high-end helmets for all off-road disciplines.

At the moment the Flex Spherical MIPS system is available exclusively on the latest Bell and Giro helmet models, both road and mountain. For the MTB sector there are three models: