Last Winter I put a little extra effort into building my first new personal Downhill bike in quite some time. I even sent it off to an old friend for custom paint. The bike is mainly a test bed for some review bits, plus it’s my go to rig for laps at the local hill. Amongst those parts for review was the new Fox 40 Factory Grip2 fork.

Visually, the most standout revision was to the newly sculpted lower legs, but upon closer inspection Fox has implemented a great many more updates to the iconic DH fork – many of which we’ll be going over shortly. Anyhow, ever since the snow melted off, I’ve been hammering away on it. Here’s how it’s been working out… 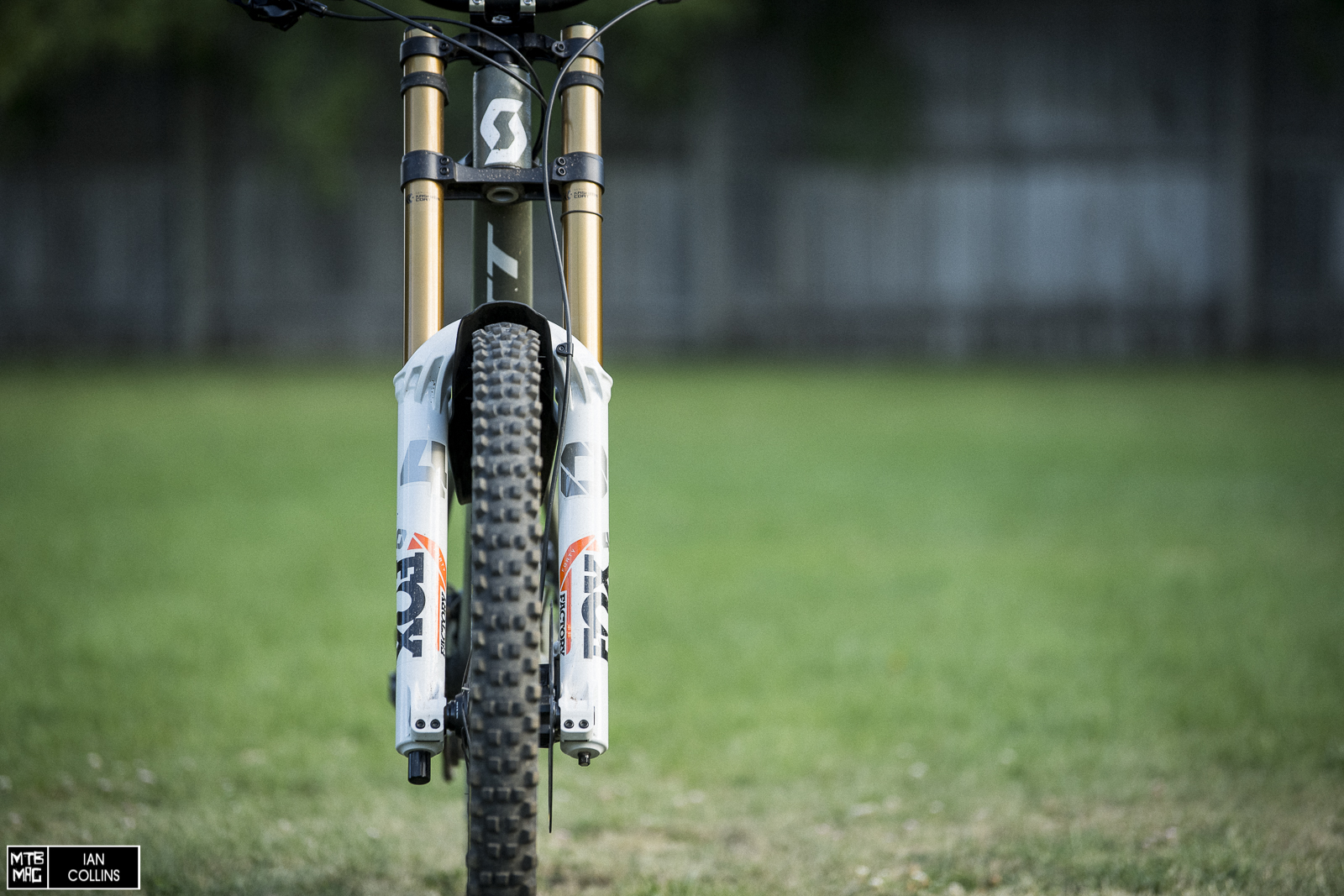 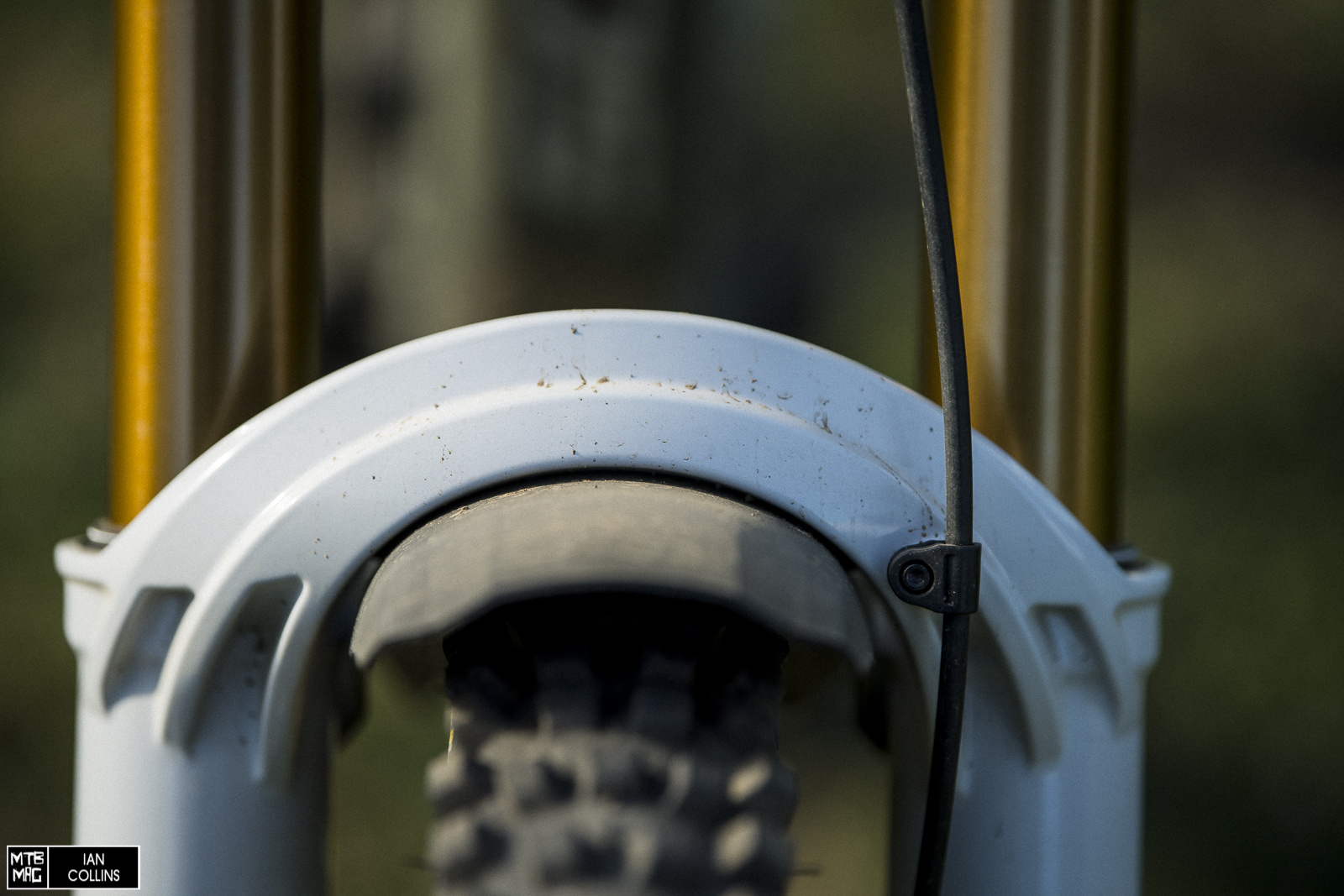 Starting with the most notable change is the new arch, which, on all of Fox’s 2021 forks have taken on a rounded shape that also sits further forward. That allows the arch to clear larger head tubes while also bringing the axle location closer to the actual legs, thus improving torsional stiffness. 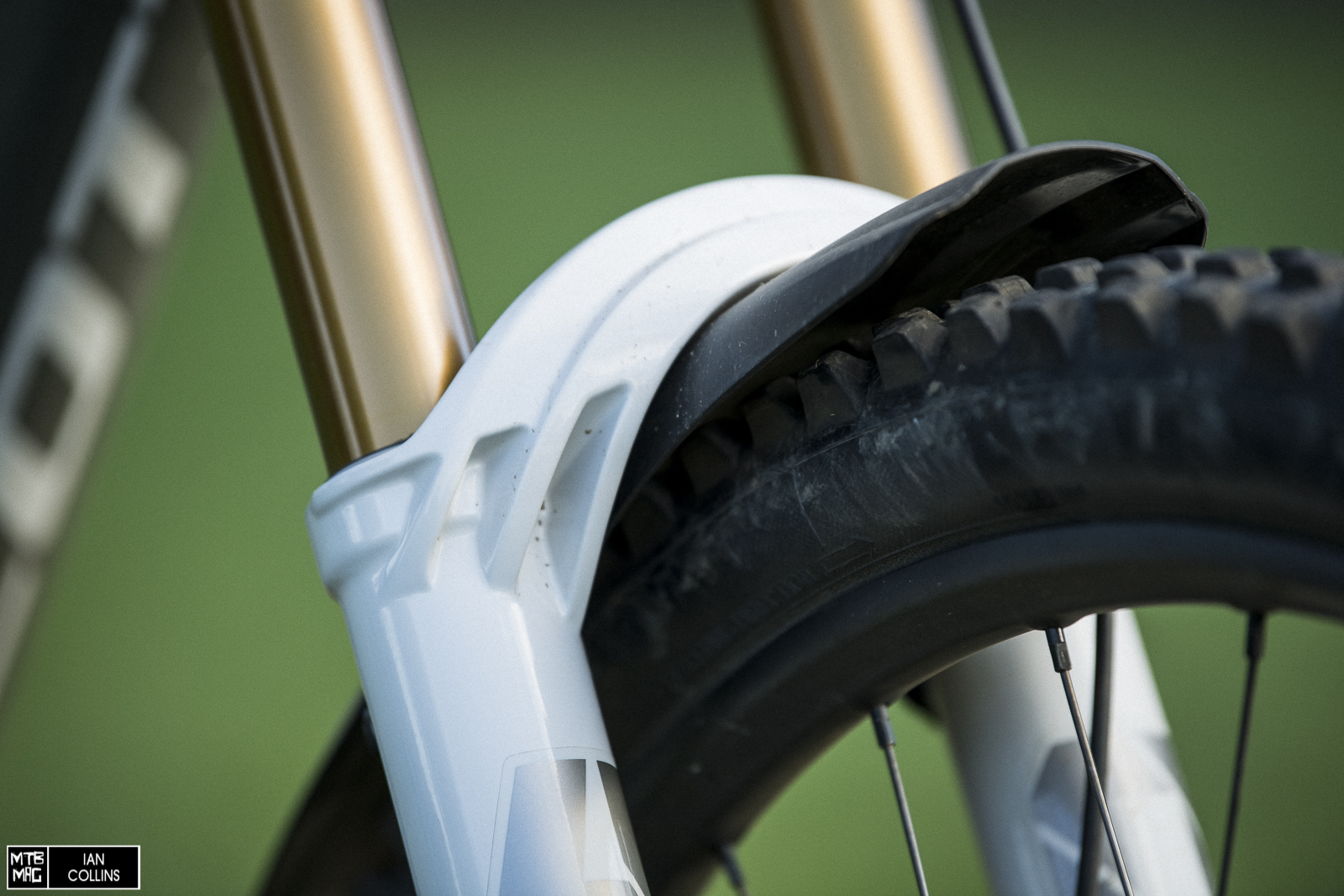 There is a fair amount of relief throughout the fork to help keep weight down. 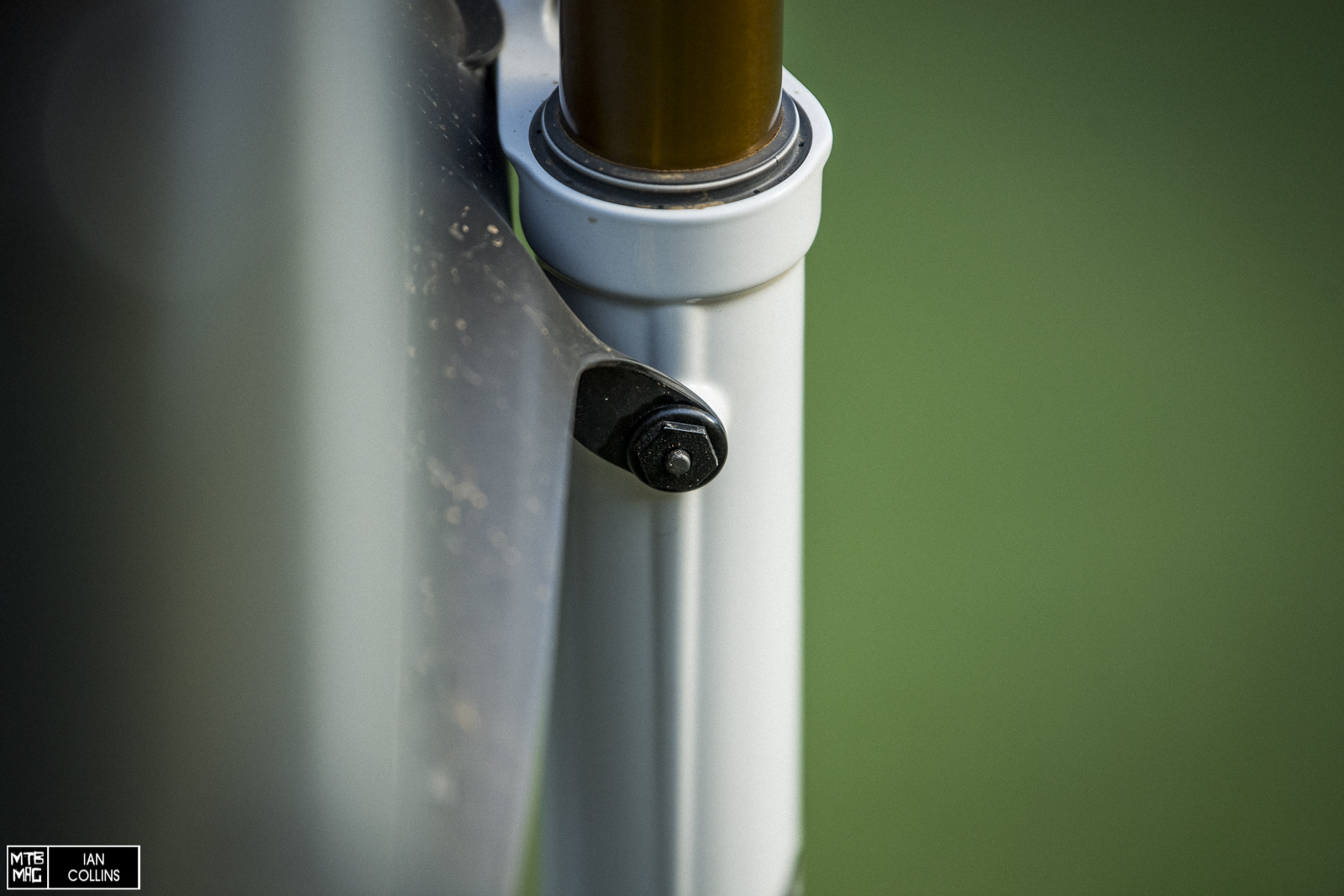 There are two big updates shown above. First, the air bleeder button allows you to depressurize the trapped air in the lowers and thus adjust for altitude. This will give your fork a consistent feel regardless of whether you’re at sea level or at 10k. Additionally, you can see the lower leg air channels whose benefit it is two fold. First, they increase air volume of the trapped air, which helps the rider to achieve full travel without having too much unwanted pressure build up. Second, they also allow the bath oil in the lower legs to reach the foam rings and dust wipers. 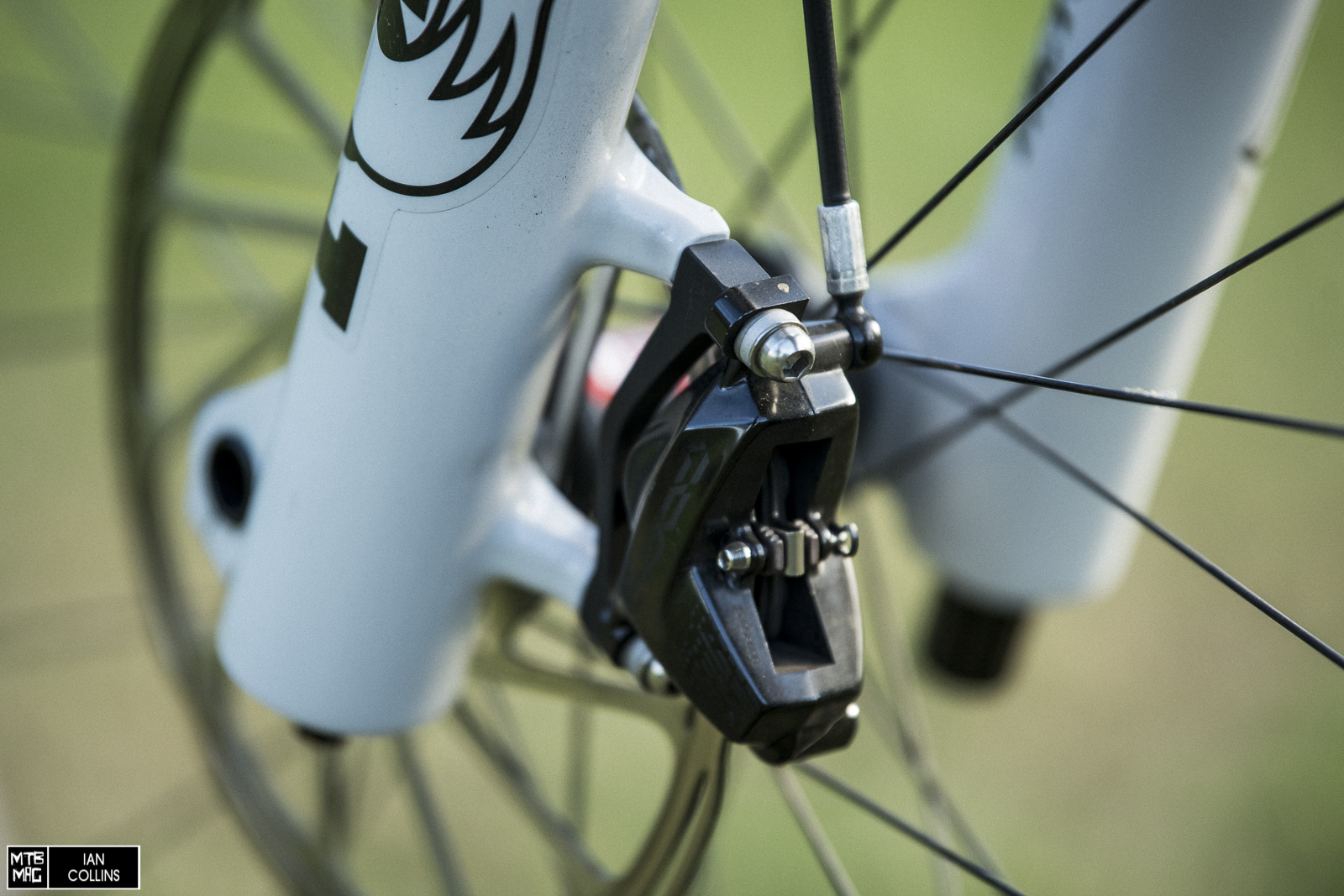 A standard 203mm rotor bolts up with no adapter necessary. A 220mm (shown above), or 223 will need an adapter. Fox lists the fork as being cleared for up to 230mm rotors, although I’ve yet to see anything that large from any of the major brake manufacturers out there. 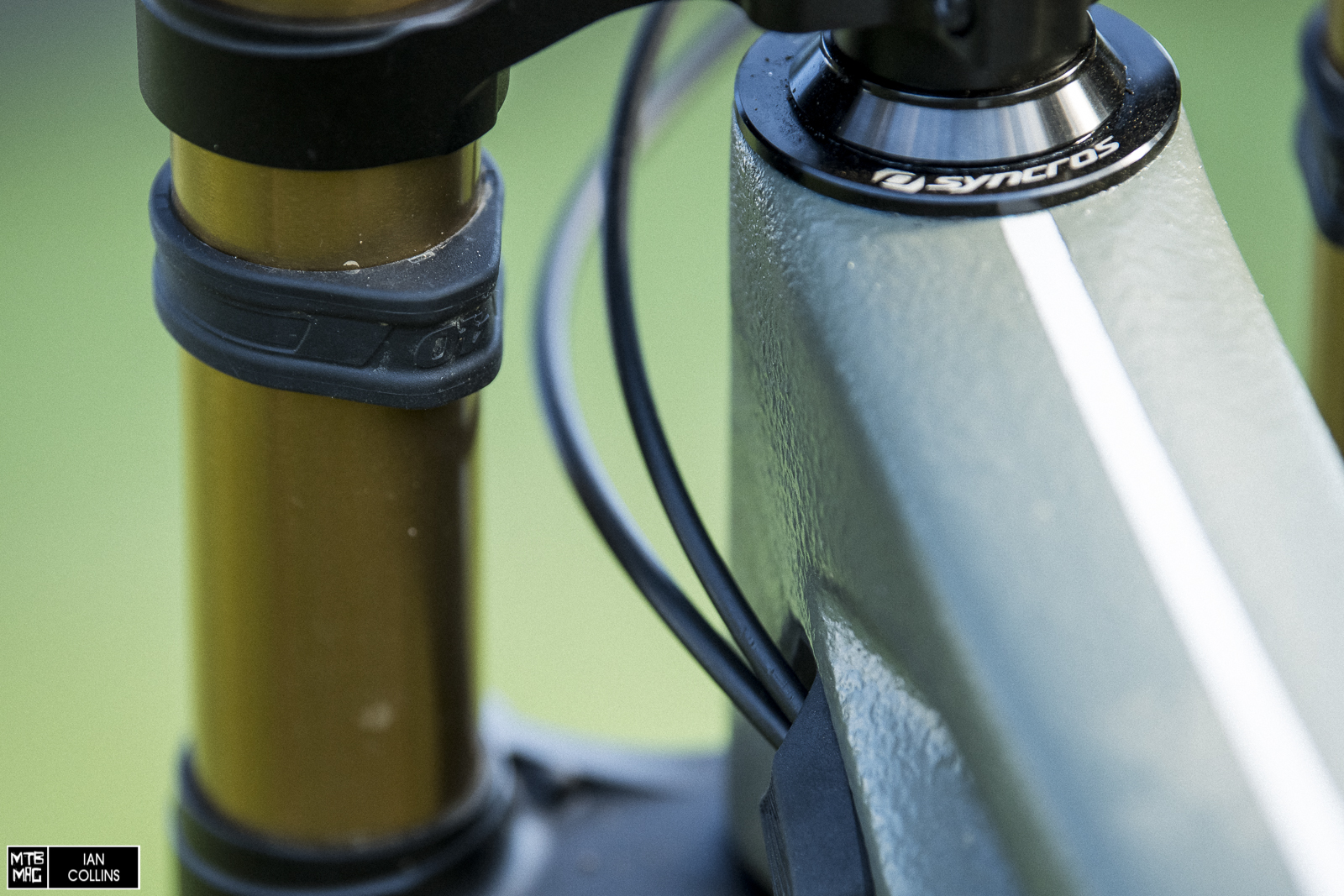 Although it doesn’t much matter, it was at this exact moment that I realized that my fork bumper was upside down! Standard rubber bumpers are included to protect your frame at full lock. 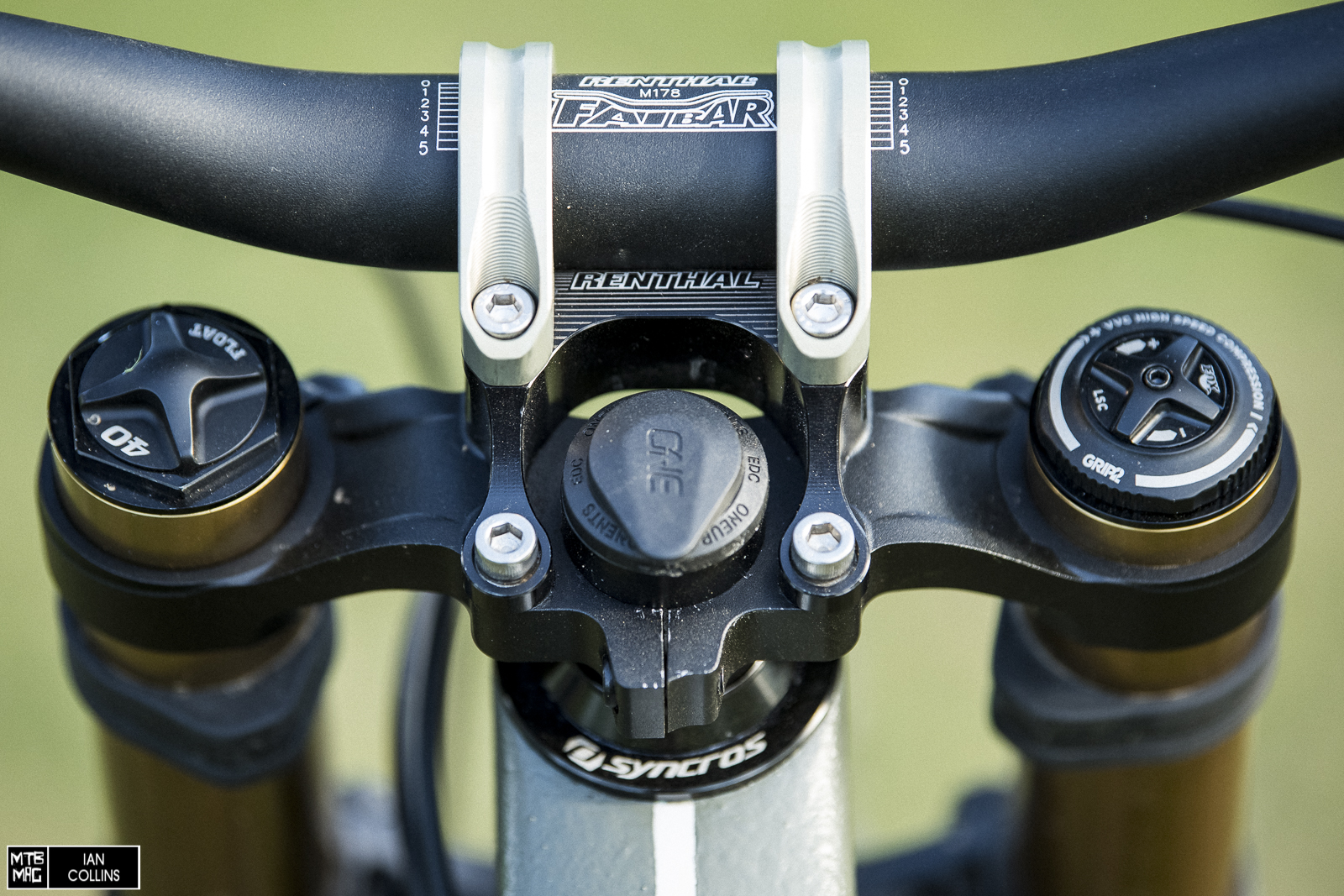 The fork ships with a drop crown and a standard direct mount stem attachment. 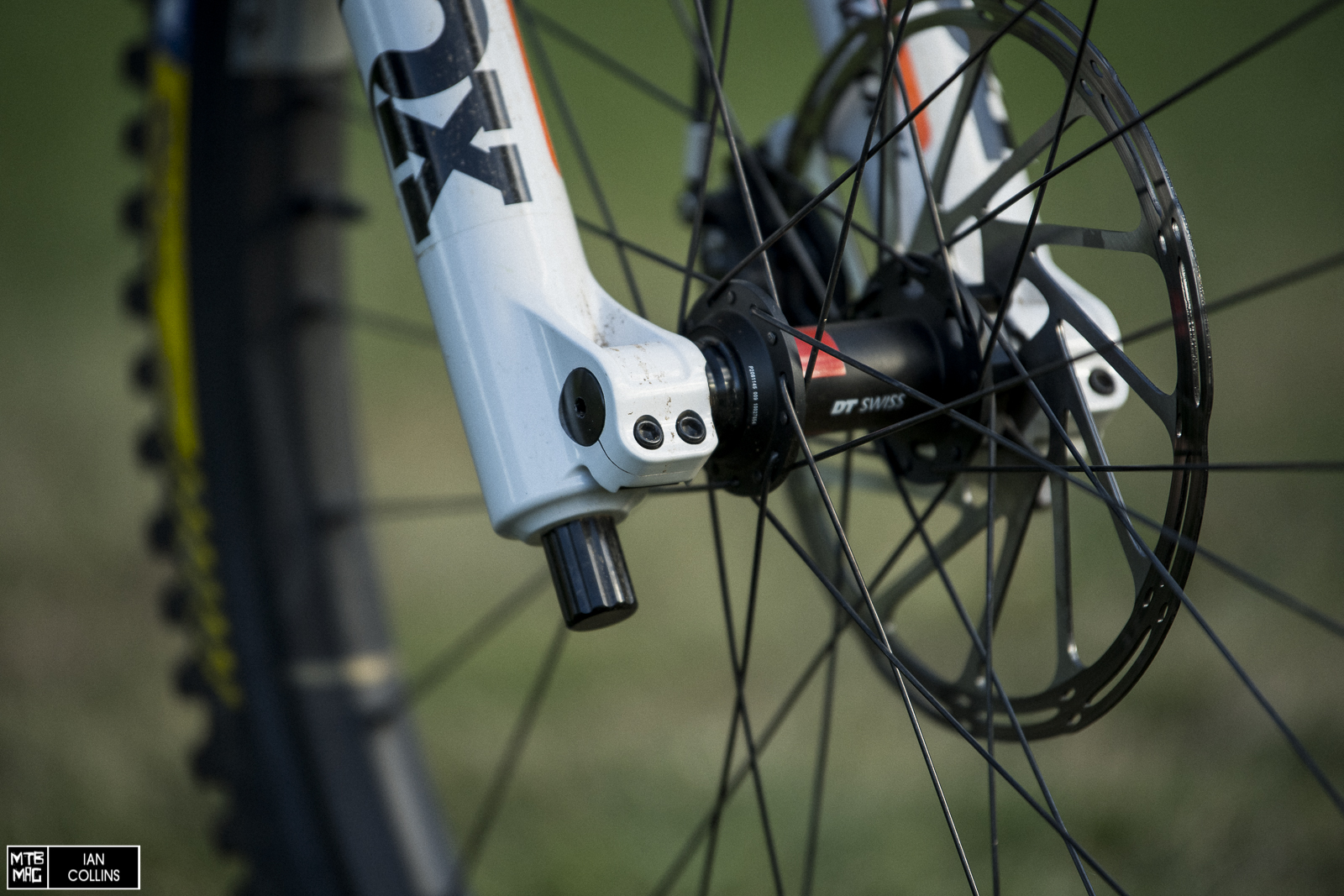 The 40 sees a standard 20mm x 110mm boost through axle with four pinch bolts as standard. There is an insert on the other side of the casting, so that if you strip it out, you’re not out an entire lower leg assembly. Also note the black aluminum covering, which provides access to the high and low speed rebound damping adjustments. 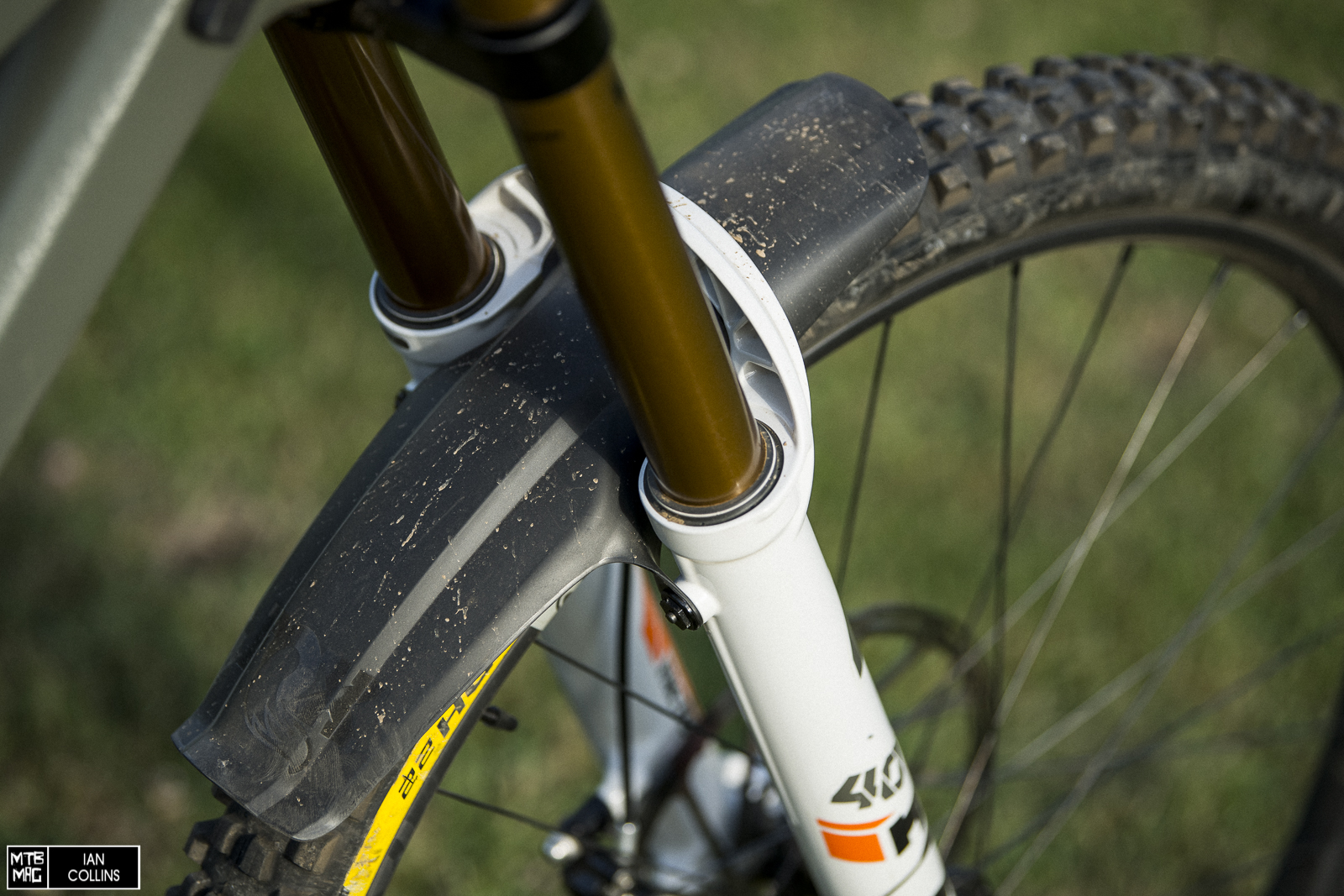 Also new for this model is an integrated fender that provides quite a bit of coverage and extends further than most (but not too much) in front of the crown. 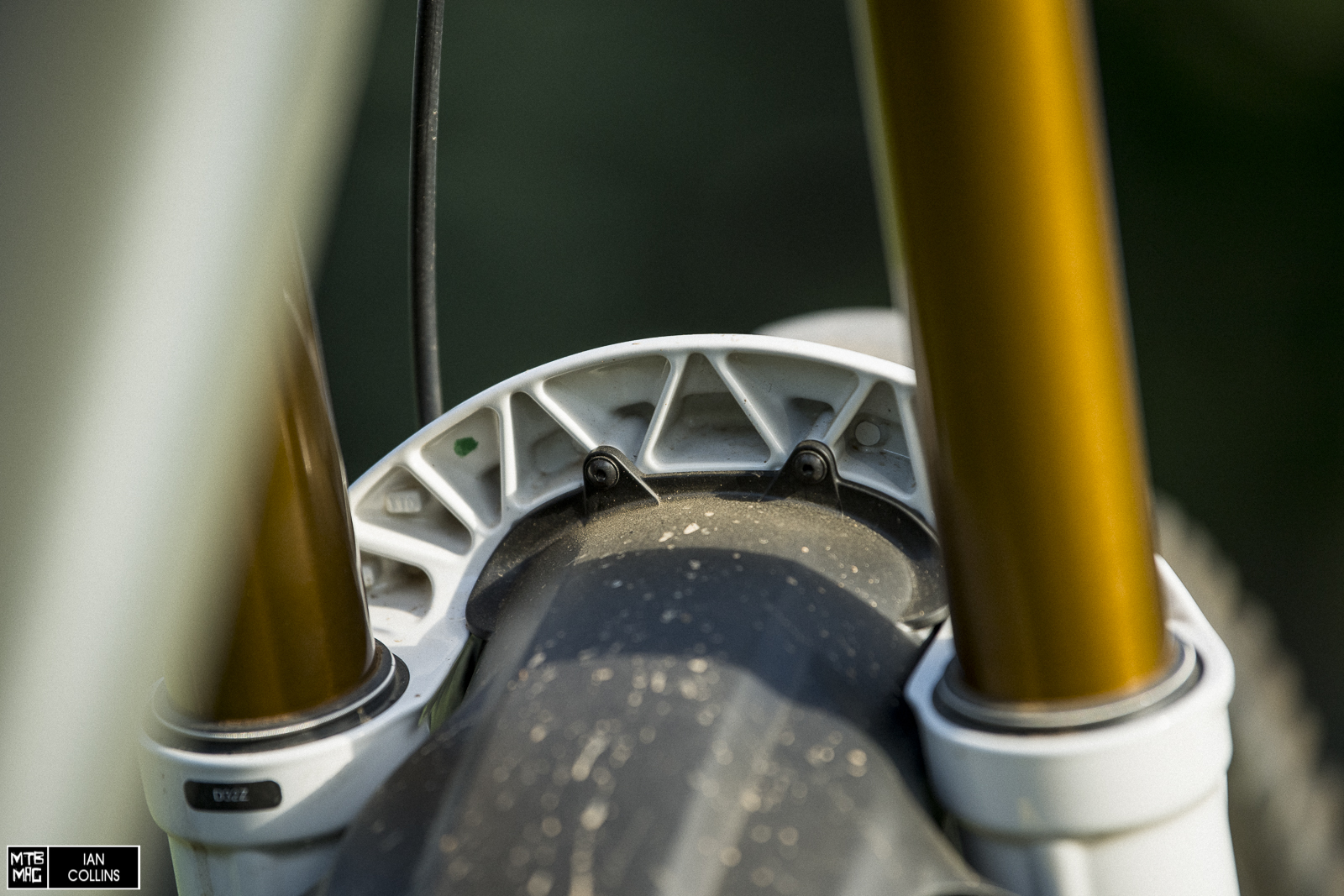 The fender is nicely molded to be supported by the shape of the fork itself, and sees four attachment points – two on the arch and one on each bleeder. Also note all of the relief at the back of the arch.

Beginning with setup, which is very nicely laid out on Fox’s tuning guide, I started exactly where Fox recommended based on my weight. I can’t speak for other riders’ experience based on their weight and skill level, but for me personally, it was an ideal baseline as I only needed to deviate slightly to achieve the desired ride. I appreciated that Fox breaks down separate a “Firm” and “Plush” sag recommendations to help steer riders in the right direction based on their preference. In any case, I found set my pressure roughly between the two, putting me at 80PSI to and about 18% sag. I’m roughly 185 lbs geared up and the sweet spot for air spring curve was with 3 out of a possible 5 clip-on volume reducers. Given that I’m roughly in the middle of the rider weight range and that I utilized the middle number of reducers, we can deductively reason that Fox likely covers the range logically, meaning both lighter and heavier riders of a wide range of skill levels should be able to find the right feel from their air springs without having to push other variables such as pressure and damping adjustments to the extremes to compensate for a lack of range.

The last time I was riding a Fox 40, I was also riding 26″ wheels – likely on a 2010 Turner DHR, if my memory serves me correctly – so I suppose that dates me a bit. Anyhow, after spending quite a few years mainly aboard the RockShox BoXXer, the stiffness stood out right away. With that in mind, you do pay roughly a half pound penalty for the added rigidity that comes from the 5mm larger stanchions. That said, with 29″ wheels equating to faster speeds than ever before as well as being nominally flexier than smaller diameter wheels, I think it’s very much worth it. The 40s of old had a tendency to deflect a bit and ride on the slightly rough side, but I did not find that to be the case with the latest iteration. Put it this way, at no point did I lament the added material and I do think Fox has done a fine job with carefully removing material where it makes sense. While stiffness in corners was as good as predicted, one aspect that really stuck out was how rigid the fork was under heavy braking over big holes – the point being, it’s stiff both torsionally and laterally. 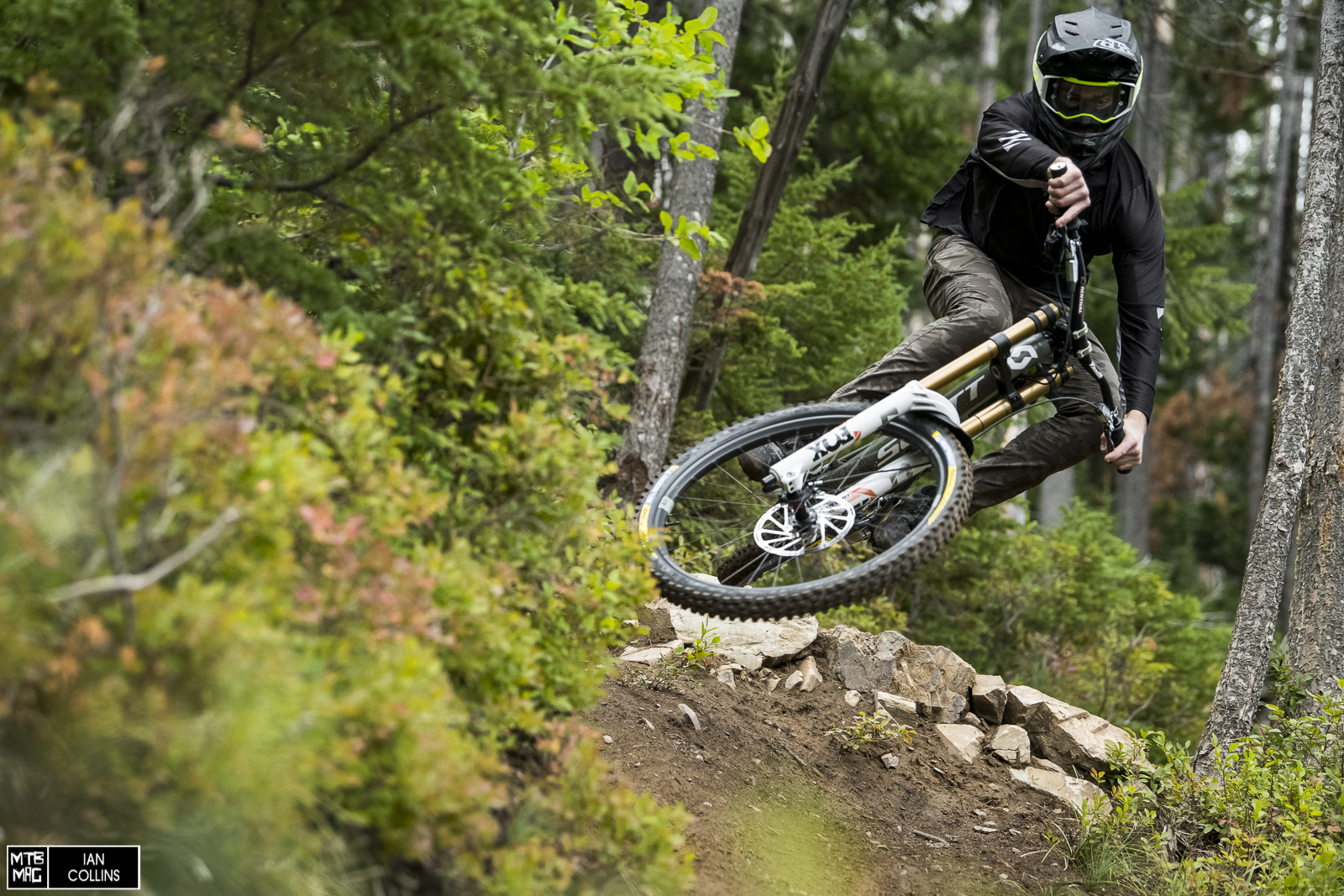 As far as the on-trail ride quality is concerned, the lower leg bleeders are absolutely beneficial.  I’ve spent the bulk of my test time at an upside down mountain with close to 4,000 feet of descending and I can confidently say that when I forget to hit the bleed buttons I’m very much made aware of it a few turns into a track. It may seem gimmicky, but if you’re hitting long descents or if you live at sea level, and ride at high altitude, this is the type of feature you will absolutely appreciate. In a word, it makes the ride far more consistent. Speaking of consistency, it’s a bit harder to parse out, but I also feel the lower leg channels are an improvement as well. If you’ve ever rebuilt a Fox fork with a Grip2 damper, you may have noticed that the damper side uses quite a large amount of bath oil to keep things running cool. Simultaneously allowing that oil to reach the seals while also opening up added trapped air volume keep things running smooth while also making it easier to use all the fork’s travel.

Before we get into aspects of the damping and adjustments side of things, I have to say that in summary, the air/spring side provided a remarkable ride quality. I was able to find the perfect balance of traction and support without sawing volume reducers in half, beating my head against the wall or feeling like I needed to go do some heavy meditation. With that in mind, there was a bit of a break in period – it was roughly 2 days of heavy runs before the fork started to feel a little more plush and sensitive. 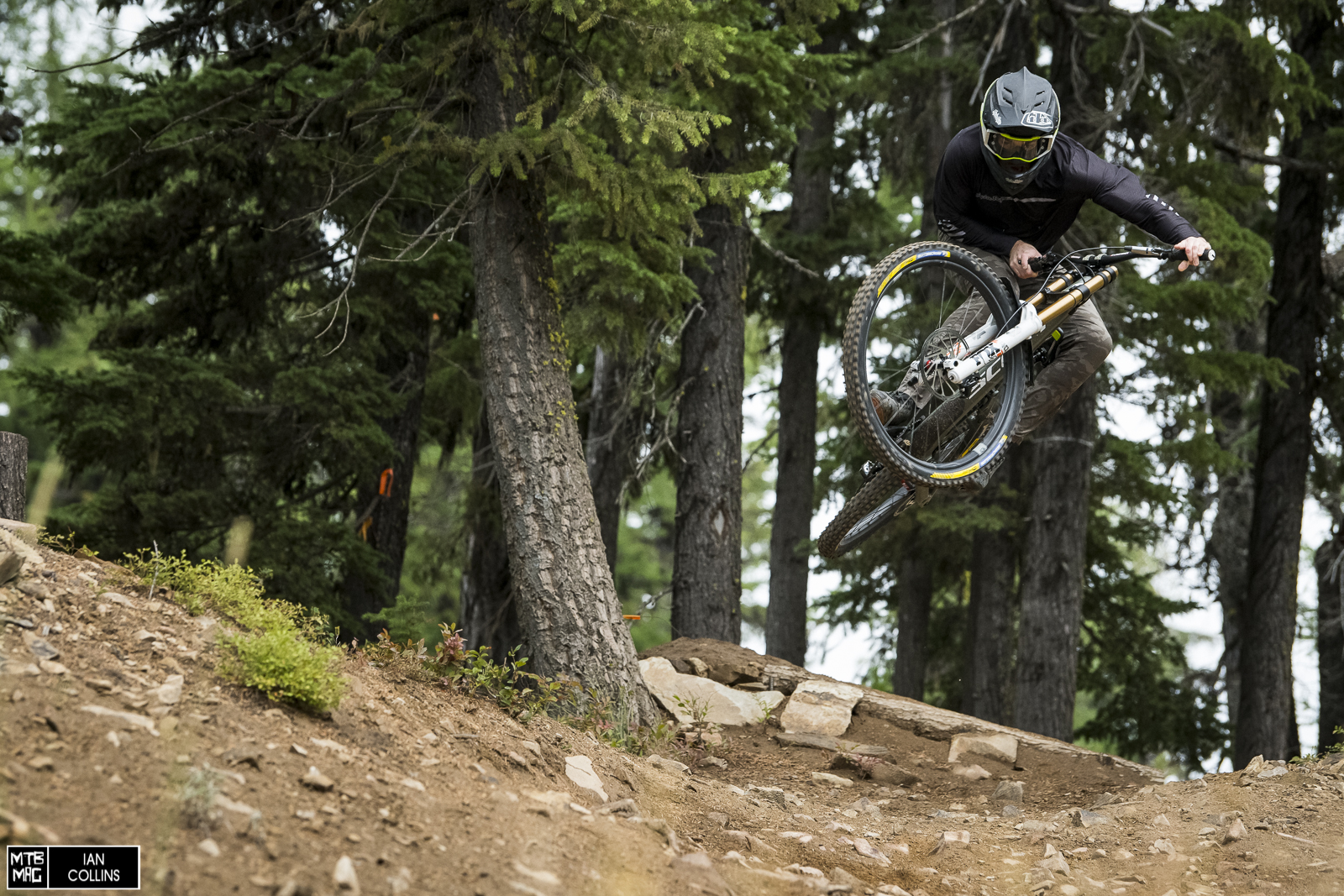 As far as damping was concerned, I have a tendency to do quite a bit of fiddling around and thus I appreciated having high and low speed damping available for both compression and rebound. The detents at all four knobs are easy to detect and keep track of, despite the high and low speed knobs having a much different throw and feel to their respective detents. In any case, I didn’t stray far from the recommended baseline – mainly I sped up the low speed rebound to get a bit more pop. Descents that top out close to 4,000 feet are great for testing out damper consistency under heat. I had no issues in that arena with a handful of top to bottom runs. That said, my hands weren’t exactly happy, but that’s not Fox’s problem – it’s mine, and my physio’s I suppose. Anyhow, much like the range in the air spring, I found myself in the middle of the damper range, with loads of usable adjustments in both directions – usable being the operative word. I’ve found the Grip2 to be excellent in the 36 and 38, so it’s no surprise that it’s excellent in the 40 as well.

Touching on some other small details, the fork doesn’t ship with the fender, but I used it for good measure and found it to be excellent – given that it’s stiffer, stronger and covers more ground, it’s certainly a big upgrade from something like a Marsh Guard. Additionally I had no issue with the axle, hardware or brake line attachment, which all worked admirably. As far as options are concerned, there are plenty. Fox offers a broad range of offsets for the crowns as well as a flat upper option. Lastly, if you’re a privateer racer, having the option to swap between 190mm travel and 203mm could play out to be advantageous depending on how tracks can vary from venue to venue.

At the end of the day, it’s difficult to any major shortcomings in the latest version of the 40. Yes, there are lighter and cheaper options out there, but not by large margins on either front. The fork offers a wide range of usable adjustment for a broad range of riders at each of the 5 ways to fine tune your ride. The little things like air bleeders, lower leg channels and a tidy fender are all icing on the cake. Perhaps what’s best of all however is the overall ride quality. It’s handling is wonderfully precise and it offers the perfect balance of traction and support when the going gets rowdy.