It’s been a good decade or so since the last time I treated myself to a custom painted bike, so I figured it was high time. After getting ahold of a fresh carbon fiber Scott Gambler frame, I reached out to Tony Baumann to see if he was game for a project. Tony is better known for his custom paint jobs on bikes for people that are way cooler than yours truly – you know, people like Ken Block. Anyhow, I decided it would be cool to go with a Rhino Lining finish and have the graphics matched to the Battleship Grey color of the new Fox 40. Here’s how it all came together… 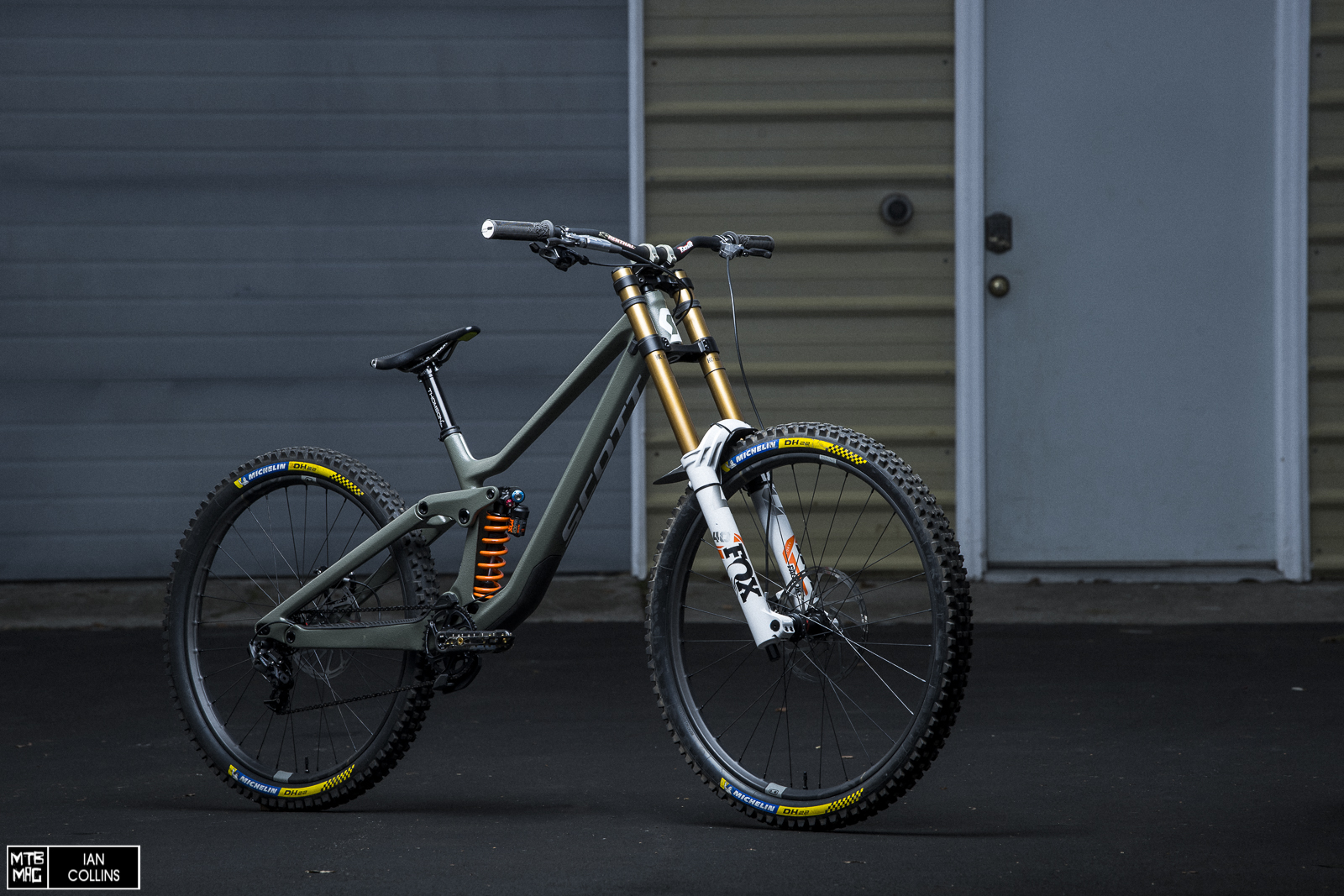 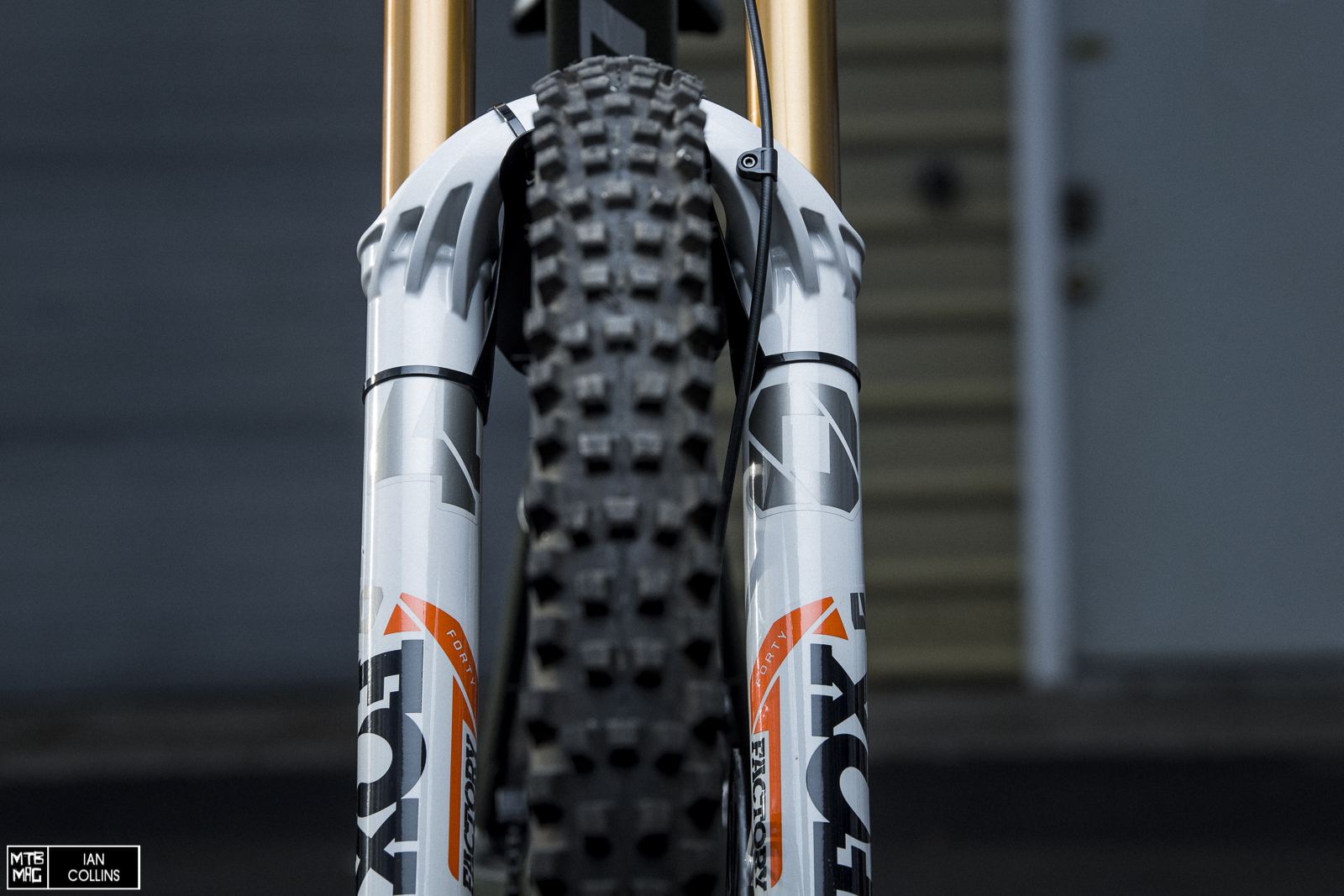 Starting up front, it has been quite some time since I last tested a Fox 40 and this all-new version with an updated chassis made for the perfect excuse to get some time in aboard one. 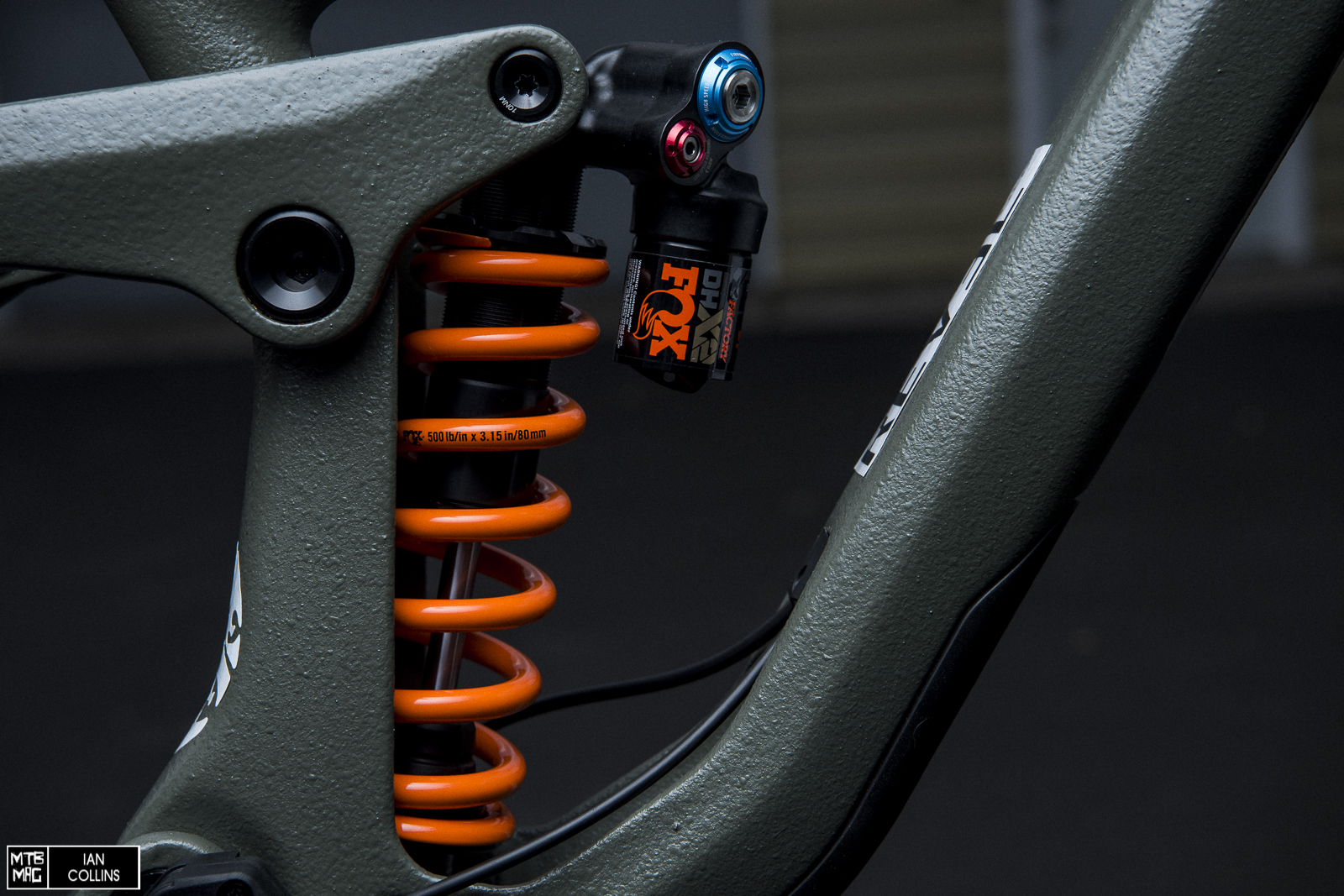 Out back, I chose the Fox DHX2. It has adjustable high and low speed rebound and compression. For 2021 the shock has been massively improved with a full redesign and I’m very much looking forward to smashing on it. 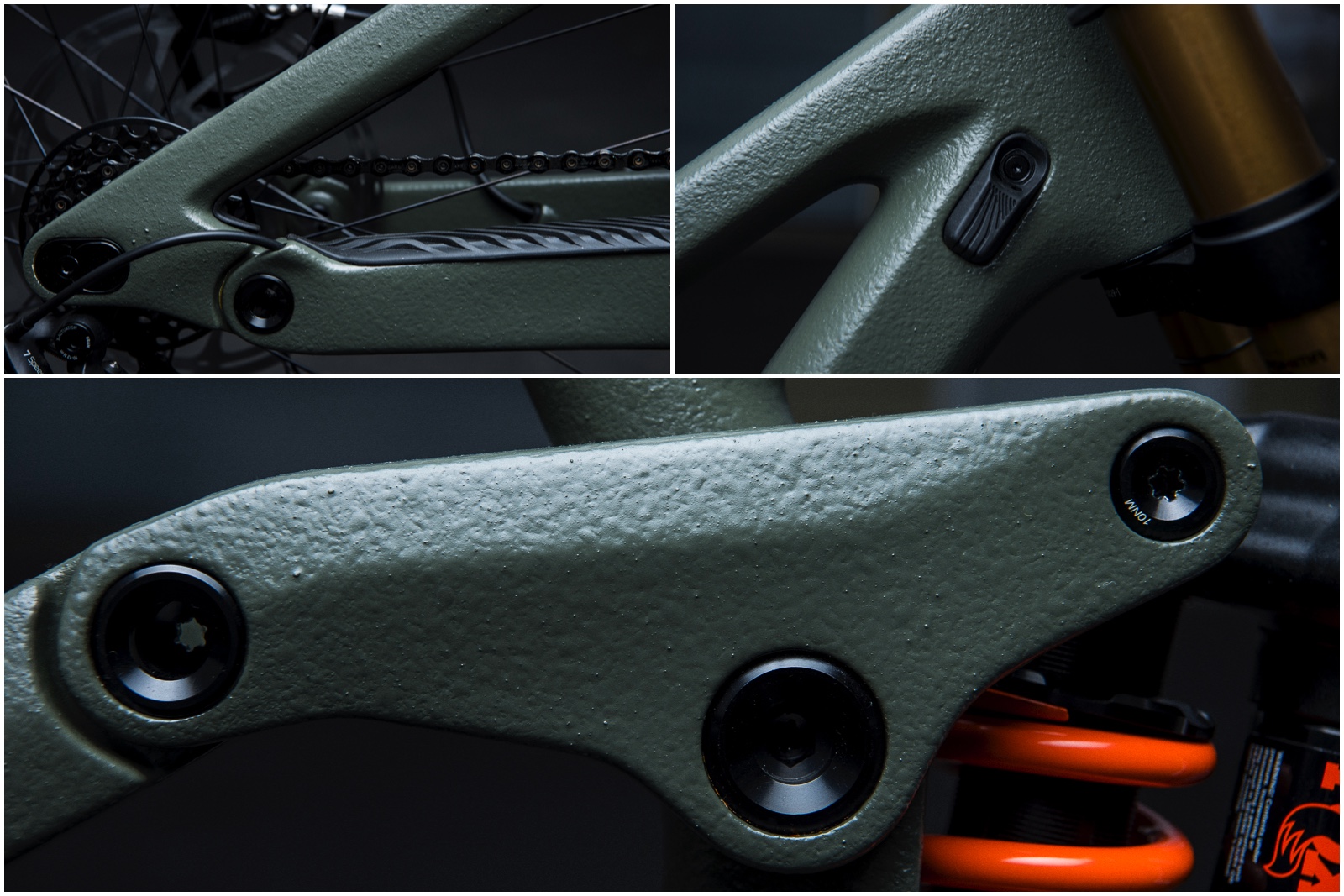 Above are a few of the Gambler’s details as well as a closer look at the paint. The cable routing is seamless and quiet as can be, running fully internally with entrances at the fork bumpers. I was thrilled that Tony was not only able to track down Rhino Lining paint, but that it was also available in a slew of colors. I wanted something subdued and out of the ordinary, so this greyish green was my top choice. 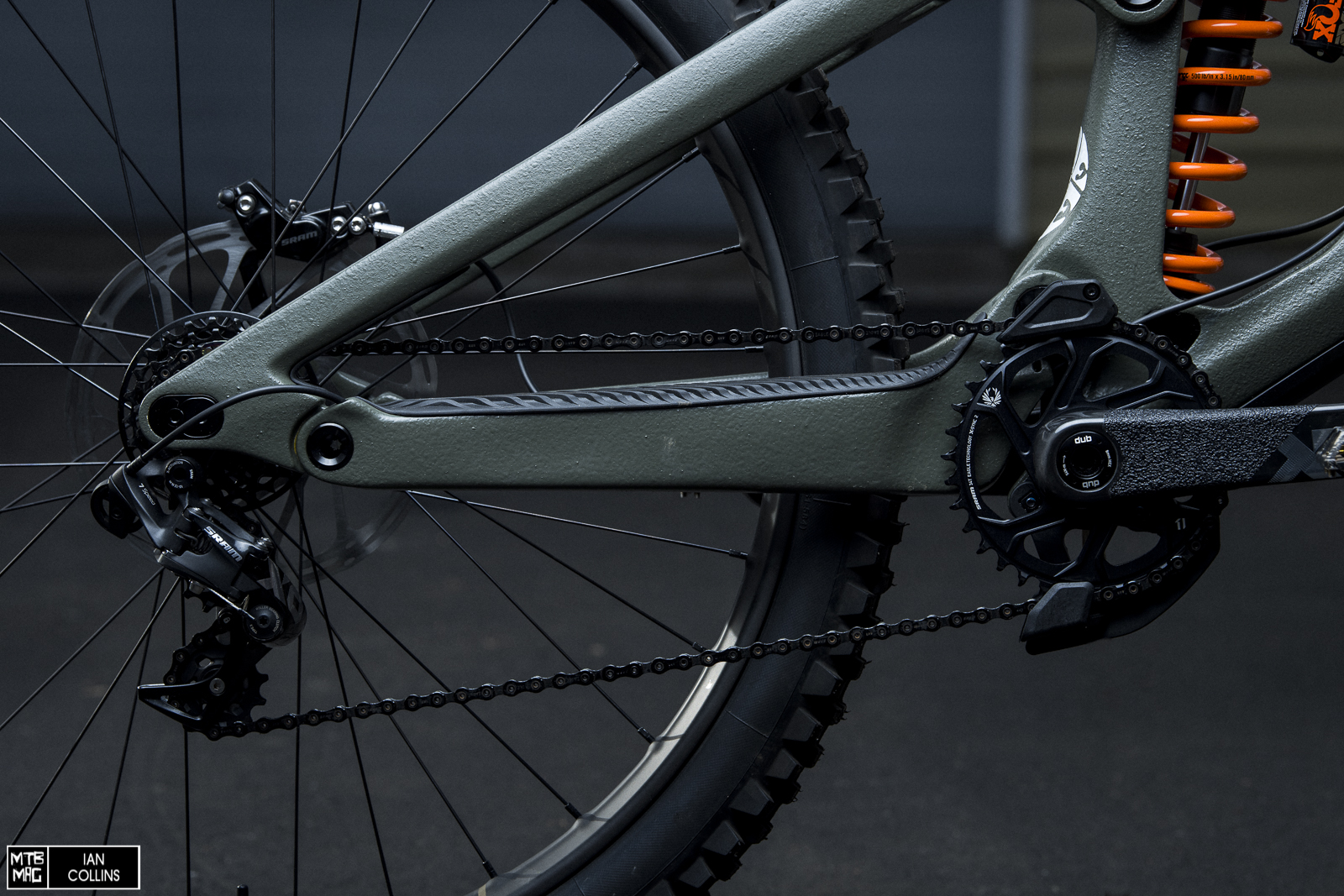 I picked SRAM’s utterly flawless XO1 DH 7-speed drivetrain with 165mm carbon fiber cranks and a 34T chainring. The integrated Scott chainstay is brilliantly designed and ships with the frameset as well. 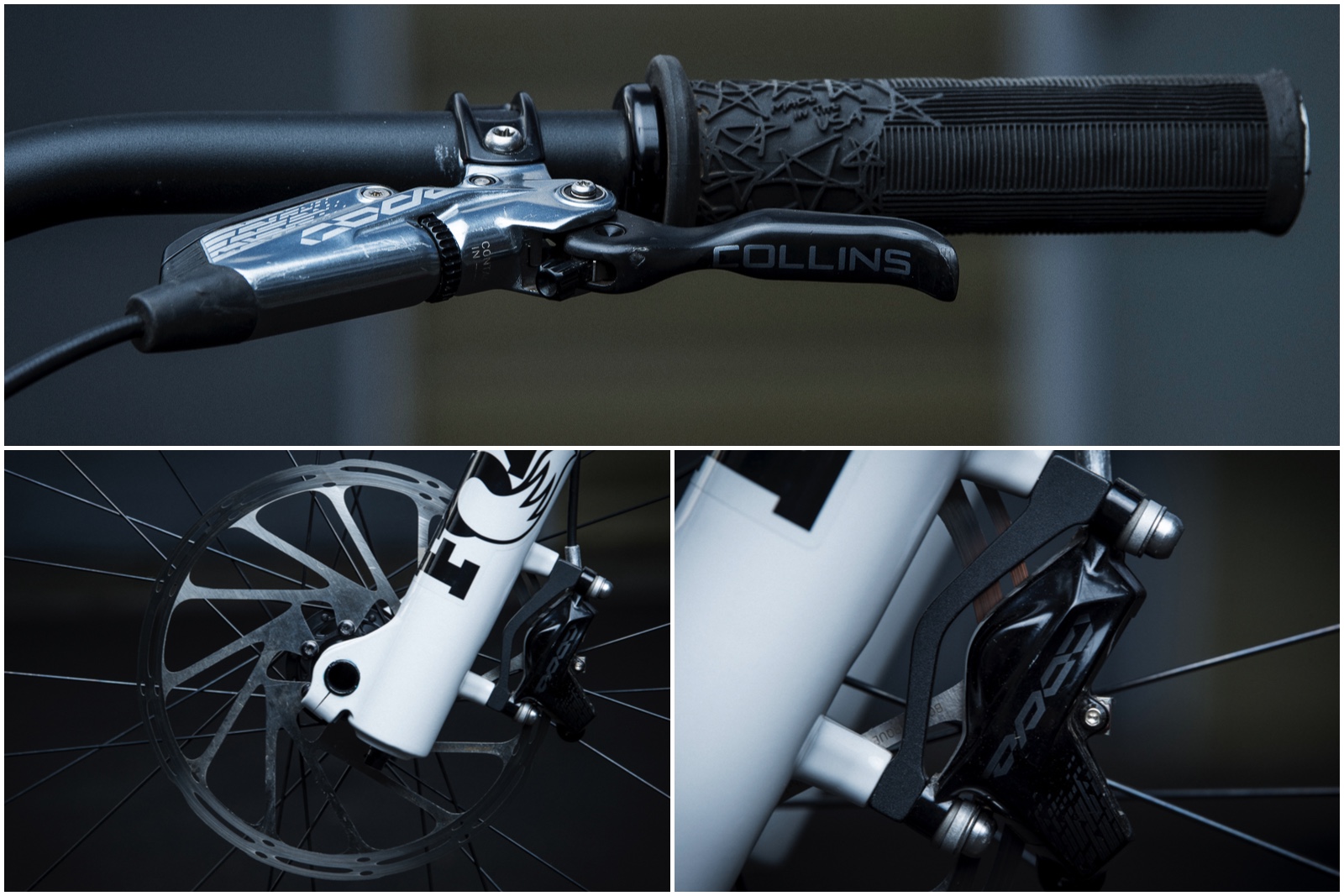 I’ve been hanging on to a set of SRAM Code RSC brakes with my name on the carbon levers for a couple of years now. I paired them with a massive 220mm Centerline front rotor and a 200mm rear. Sensus Meaty Paws grips do a great job at keeping the blood flowing and the arm pump at bay on long descents. 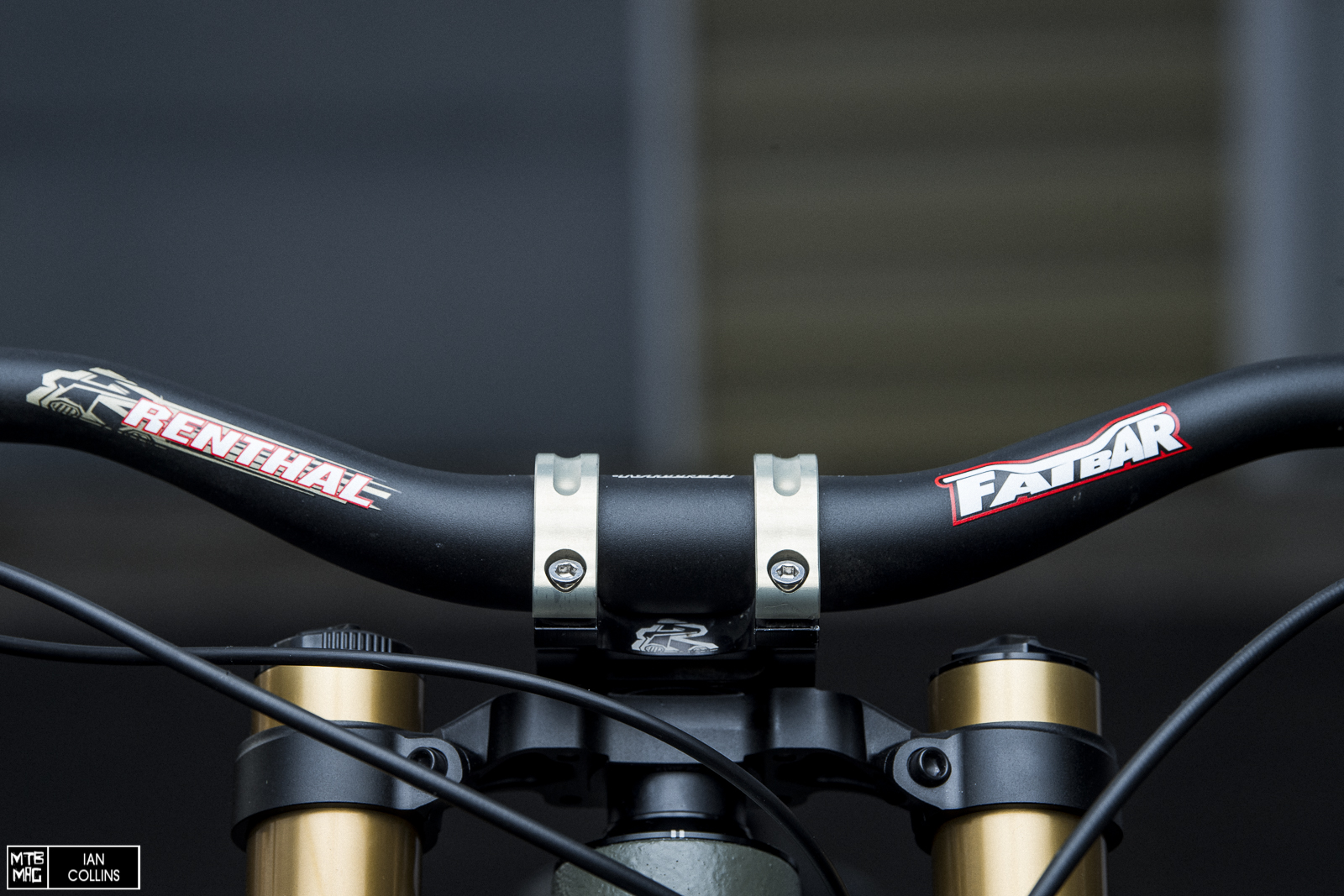 I’ve had great luck with Renthal’s DH cockpits for some time now. I’m not the biggest fan of running carbon fiber handlebars on downhill bikes and so I chose a 40mm rise 31.8mm clamp Aluminum FatBar, which takes the edge off of the chatter surprisingly well. The stem is 50mm long with 10mm of rise for a nice, tall front end. Some more frame details – the downtube / headtube logos and a single pinstripe running down the top tube are all color matched with the Battleship Grey fork. I’m starting with the bike in the low position, which is quite low and slack – fortunately the Gambler ships with a neutral headset as well as a +/-1º headset. I opted for the +1º to offset the increased slack from the smaller rear wheel. 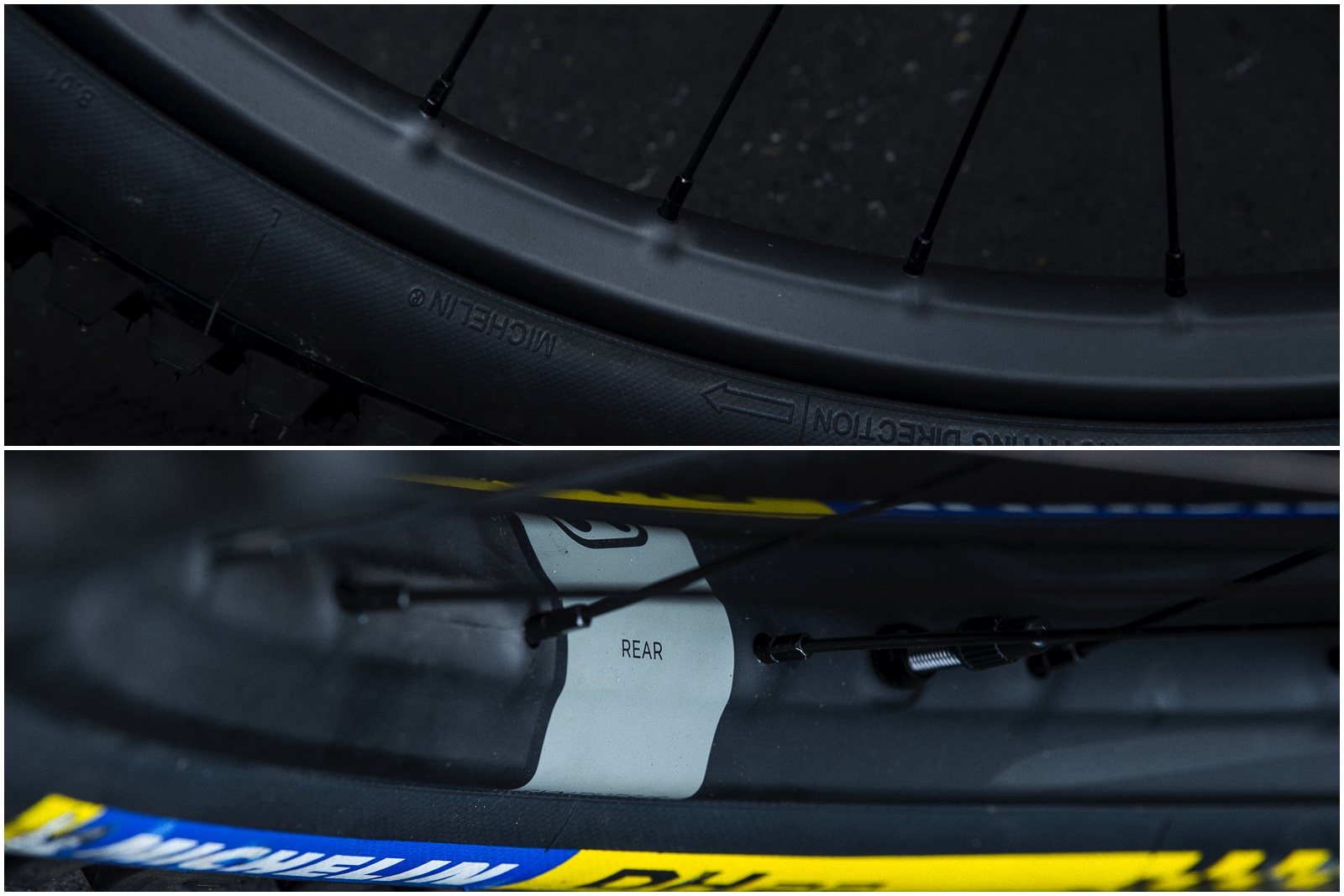 I love 29″ front and rear on trail bikes, but on DH bikes I have a tendency to buzz my ass on the tire on jumps and steep sections, so for this bike I opted for a mullet setup. My all time favorite rim is the Crankbrothers Synthesis E11, so I had to try its beefier downhill counterpart – the DH11. The Synthesis rims do an incredible job of taking the edge off while still tracking brilliantly. 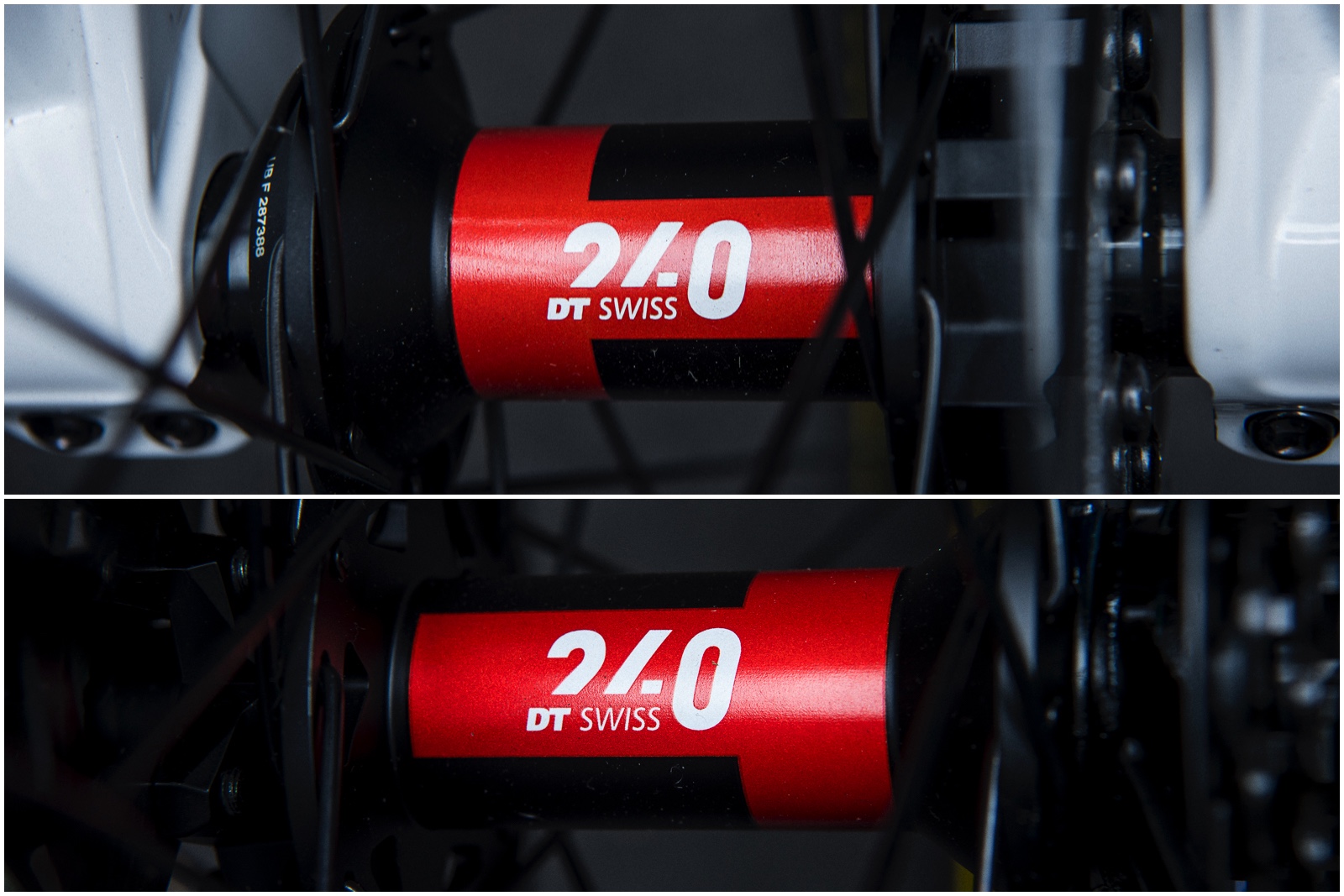 To keep the overall weight down, DT-Swiss’s flyweight and all new, fully redesigned 240 hubs were the hot ticket. I laced them with the only spokes I ever use when I custom build wheels – DT Swiss Competitions. Lastly, I like saving weight, but typically avoid aluminum nipples. Rather, standard brass nipples from DT are the go to.

I tested Ergon’s SMD2 saddle a couple of years ago and still have not found anything else that even comes close when it comes to a good DH specific seat. Ergon was kind enough to send out the Titanium railed version to save a few extra grams. 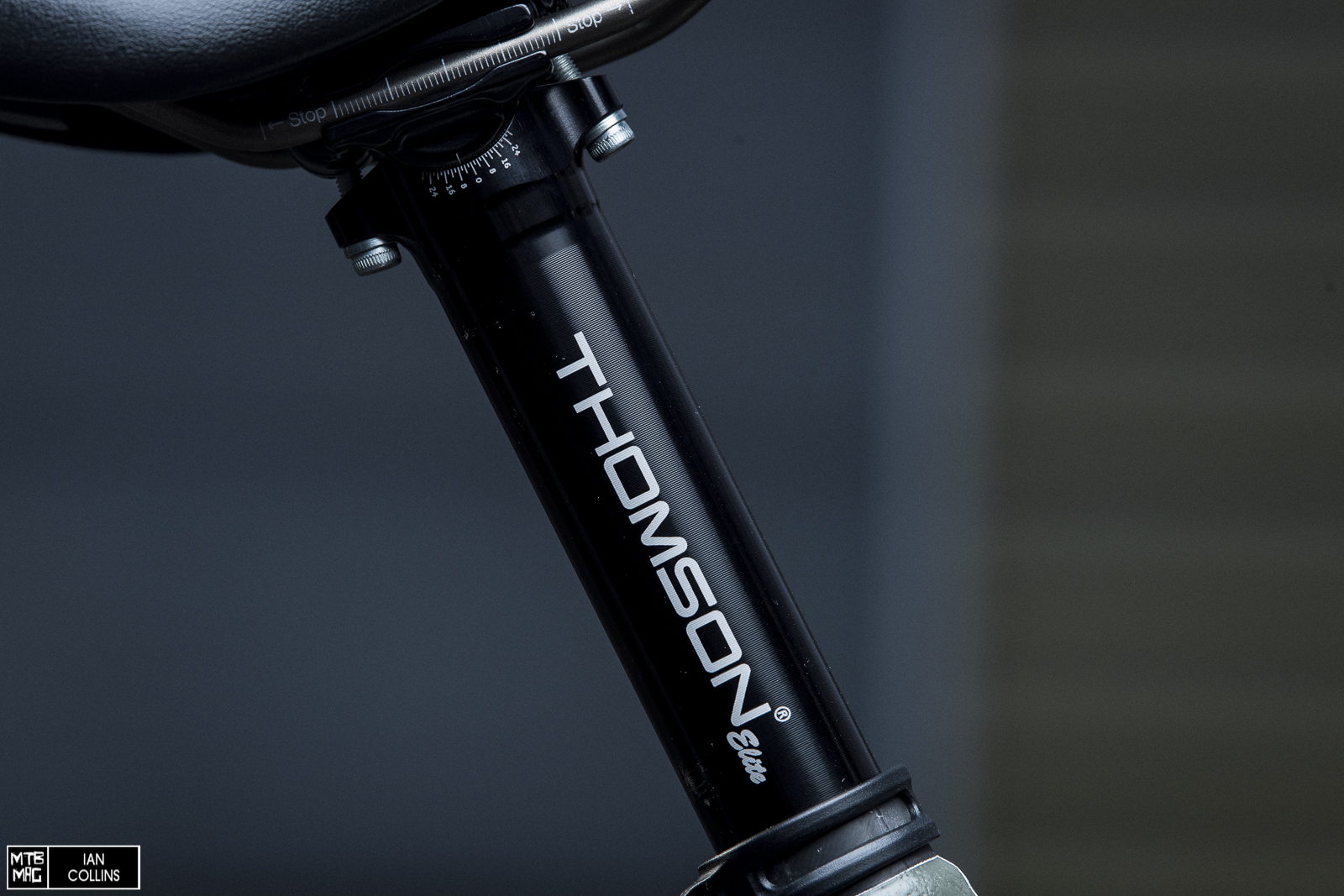 Beautiful and tough, Thomson is to seatposts as Chris King is to headsets. The Elite post is so good that I never put anything else on my personal DH bikes. 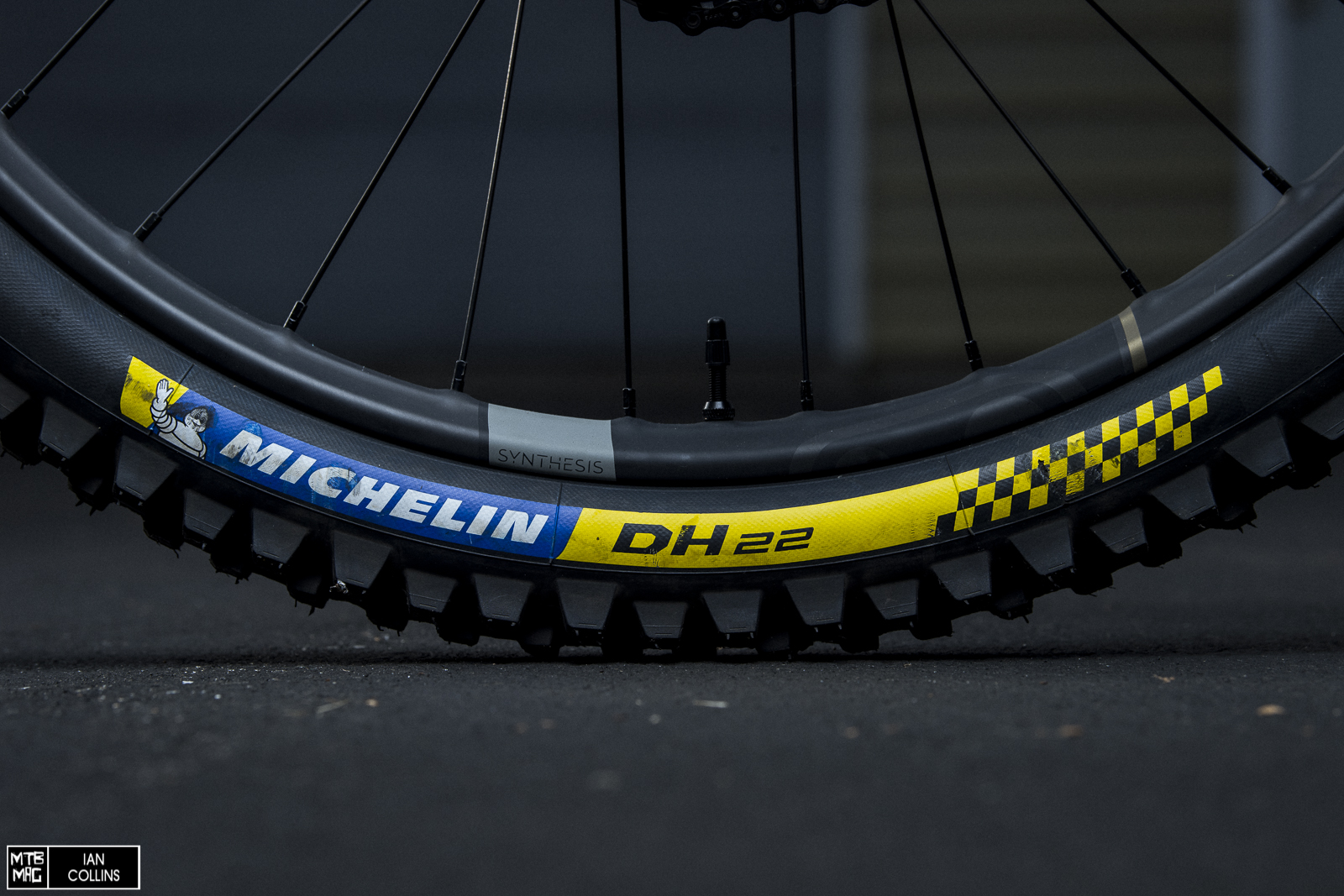 At the end of last year I put in some laps on Michelin’s DH22 tires and was blown away by their incredible traction in a broad range of conditions. While I typically opt for Schwalbe Magic Marys, the DH22 edged them out slightly. 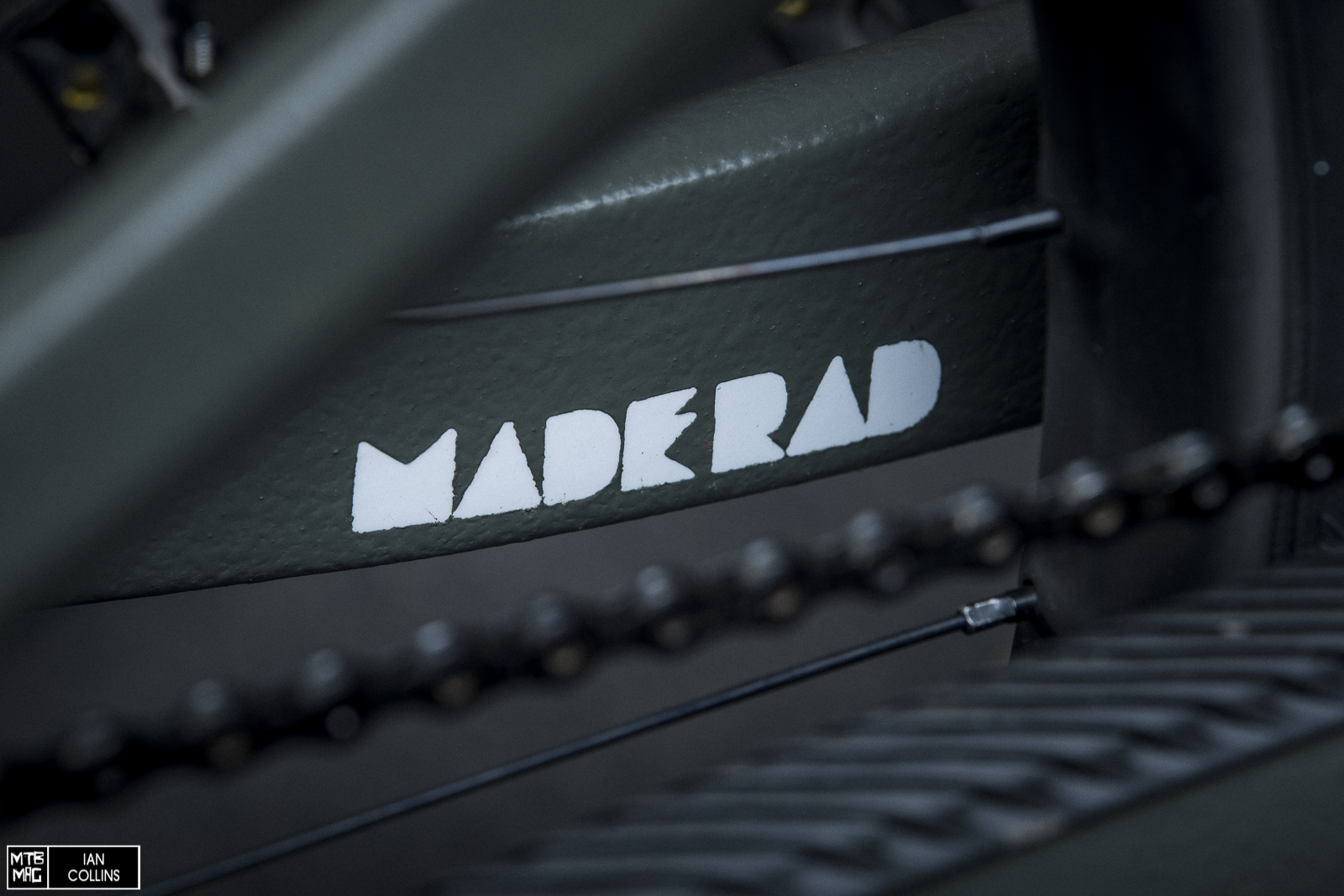 Last, but not least, Tony Baumann’s signature stamp on the bike. Visit www.maderad.com to check out more of his work.

A massive thank you to everyone who contributed to this build…