Back around the time that the pandemic broke out, we narrowly missed a very nice opportunity to test out the new range of Michelin downhill tires on the East Coast. In lieu of a formal press camp, the legendary French manufacturer was kind enough to send out samples of the lineup in its entirety. Naturally I’m starting off with our review of the DH22, which Michelin hails as the most versatile in the range. It is flanked on one side by the DH Mud, whose usage is intended toward, well…mud, obviously. On the other side is the DH34, which is aimed more generally at hardpack, firm rock (as opposed to loose) and bike park riding. 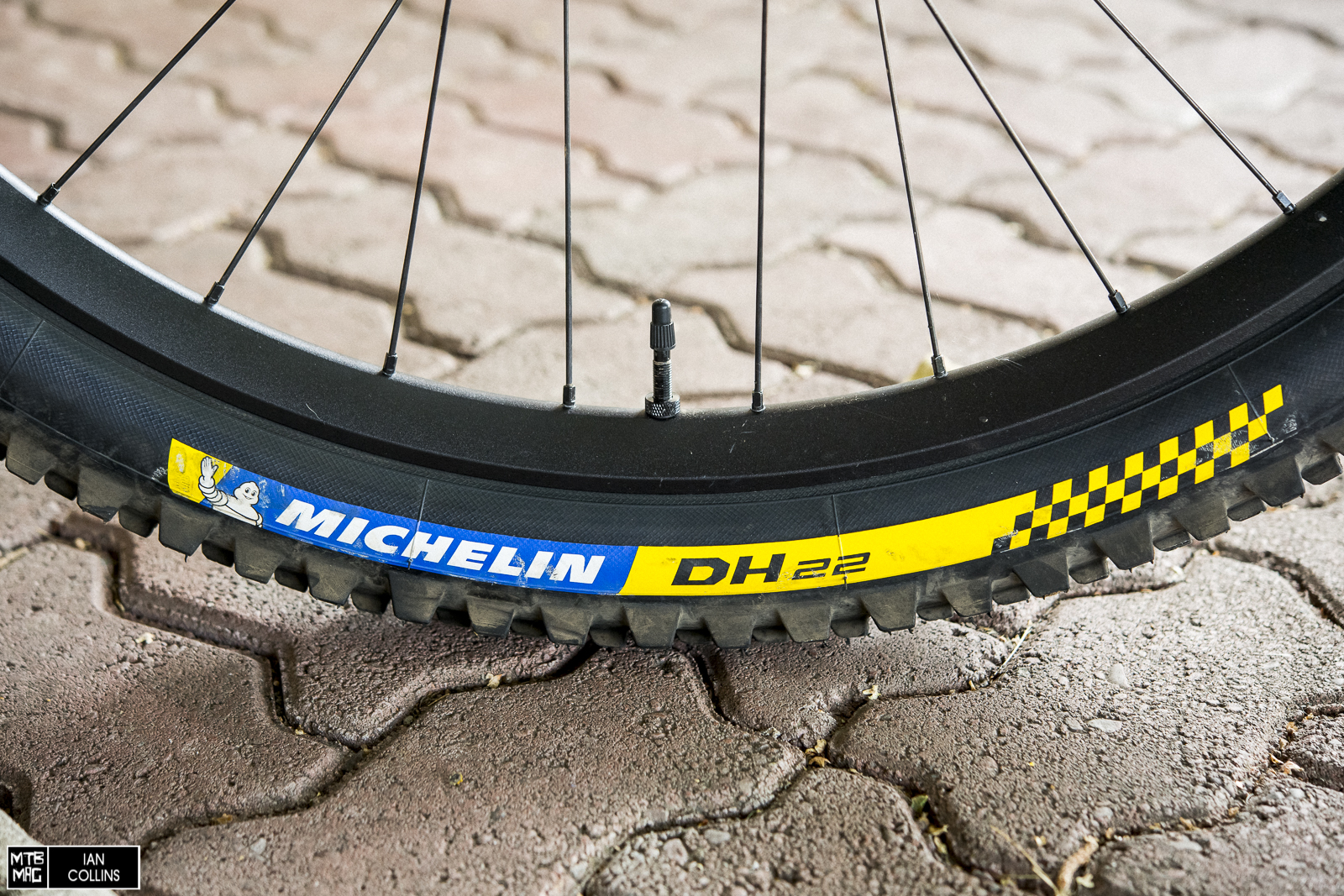 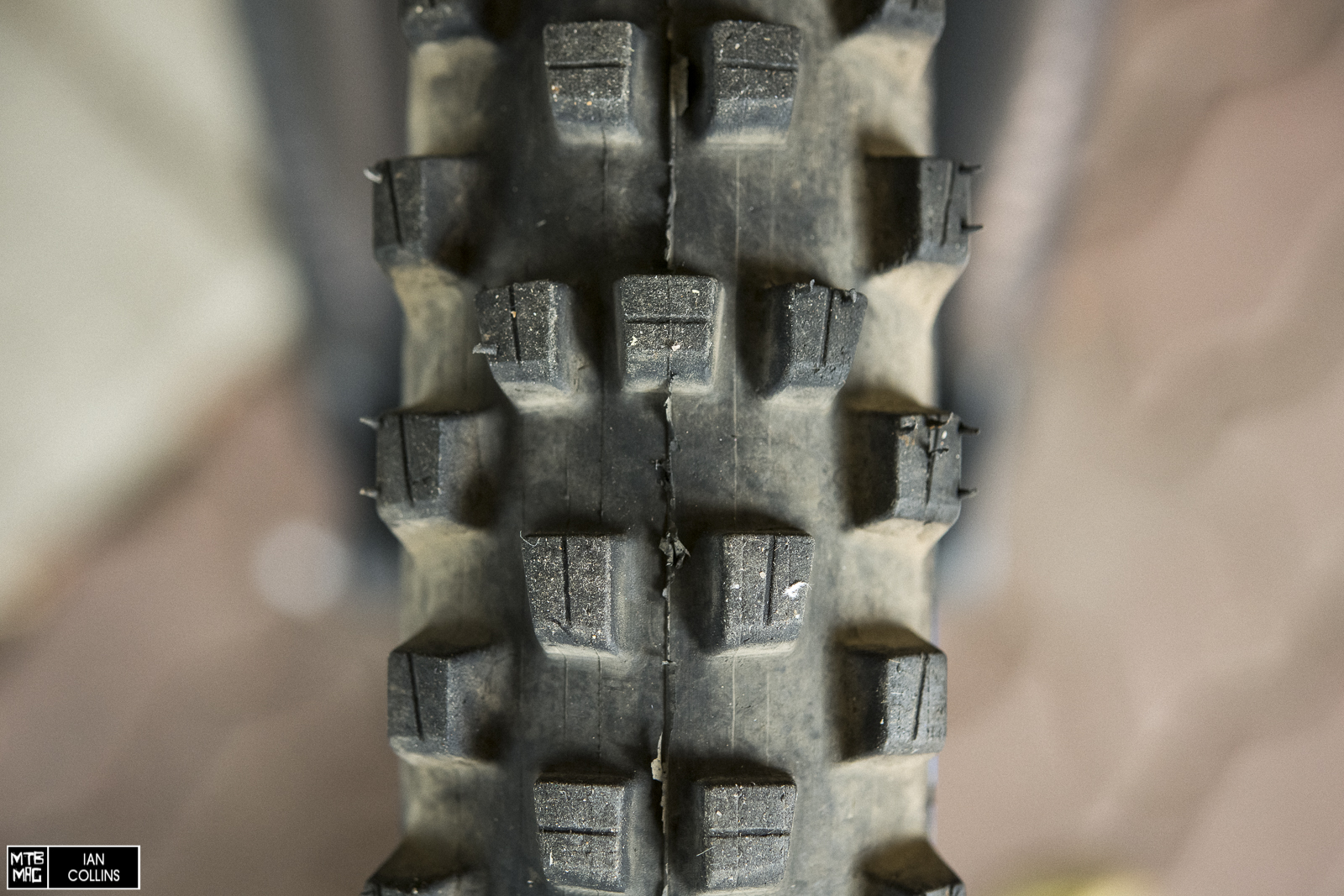 At the heart of the DH 22 is a 2 / 3 / 2 pattern of knobs running down the center. Note the sipes which alternate between vertical and horizontal on the rows of two. 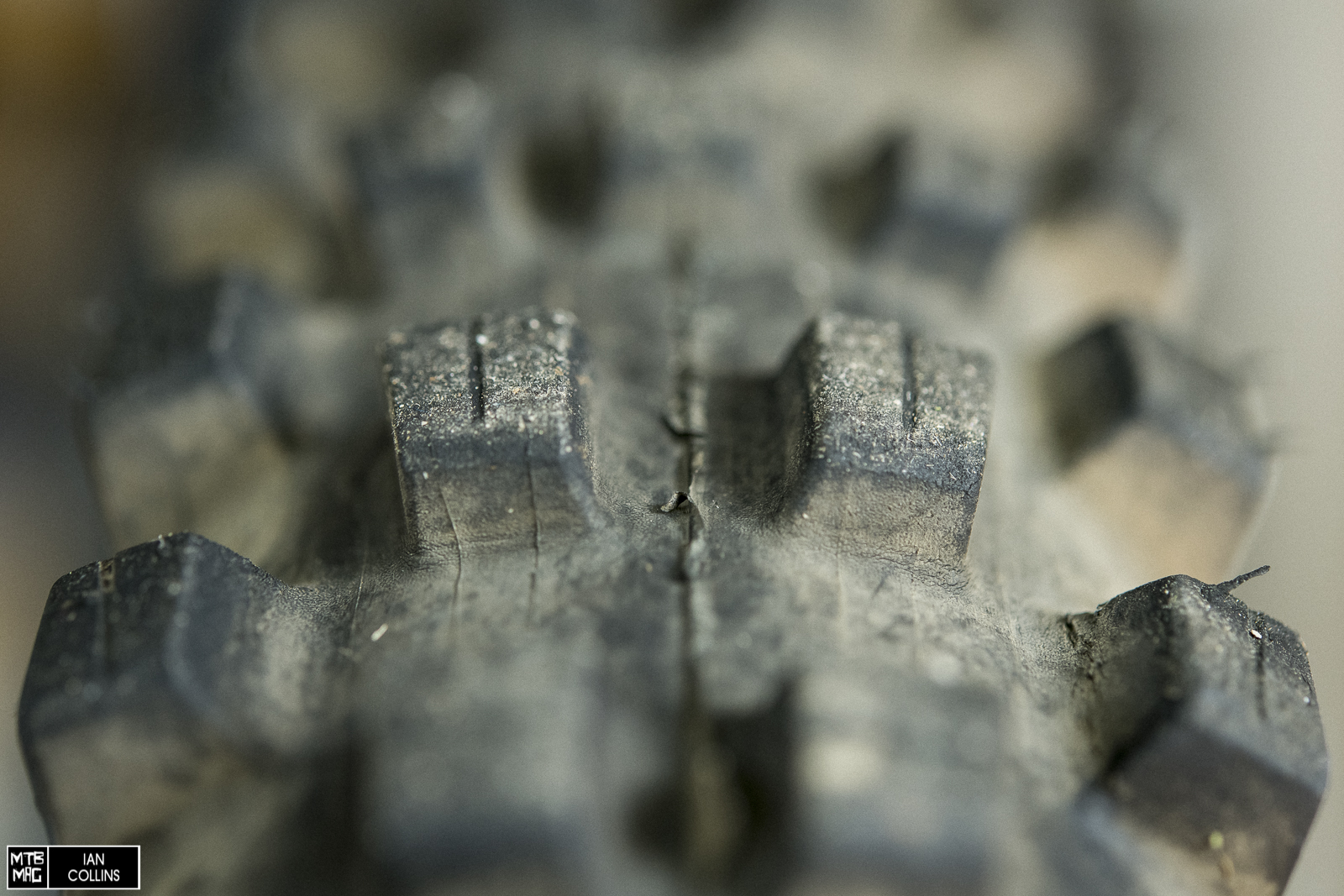 If you look closely, you can see that the leading edges are ramped to improve rolling resistance. 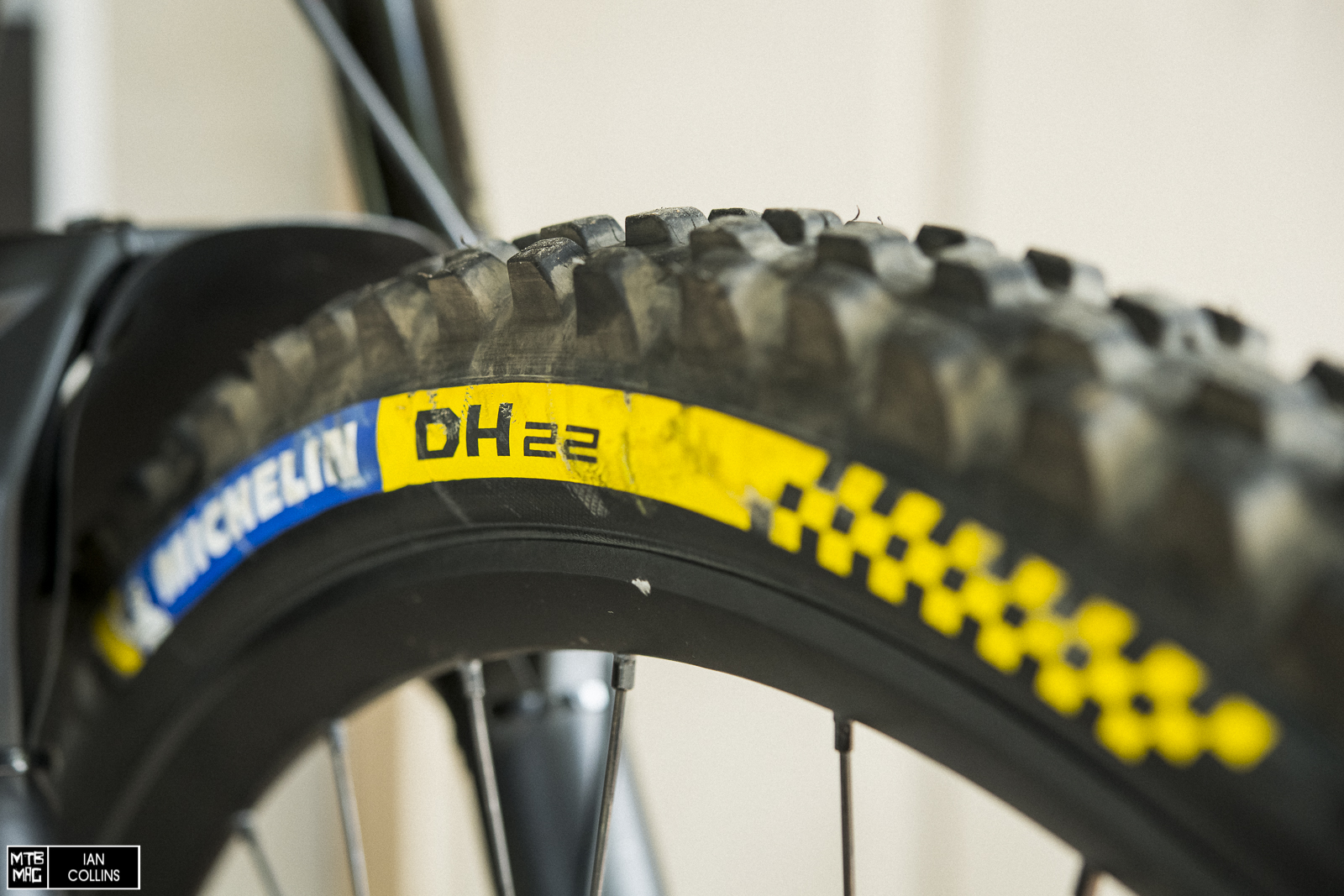 For Michelin’s new gravity line they went bold on their branding with the hot patches. The loud colors are the classic Blue and Yellow that Michelin has long utilized. 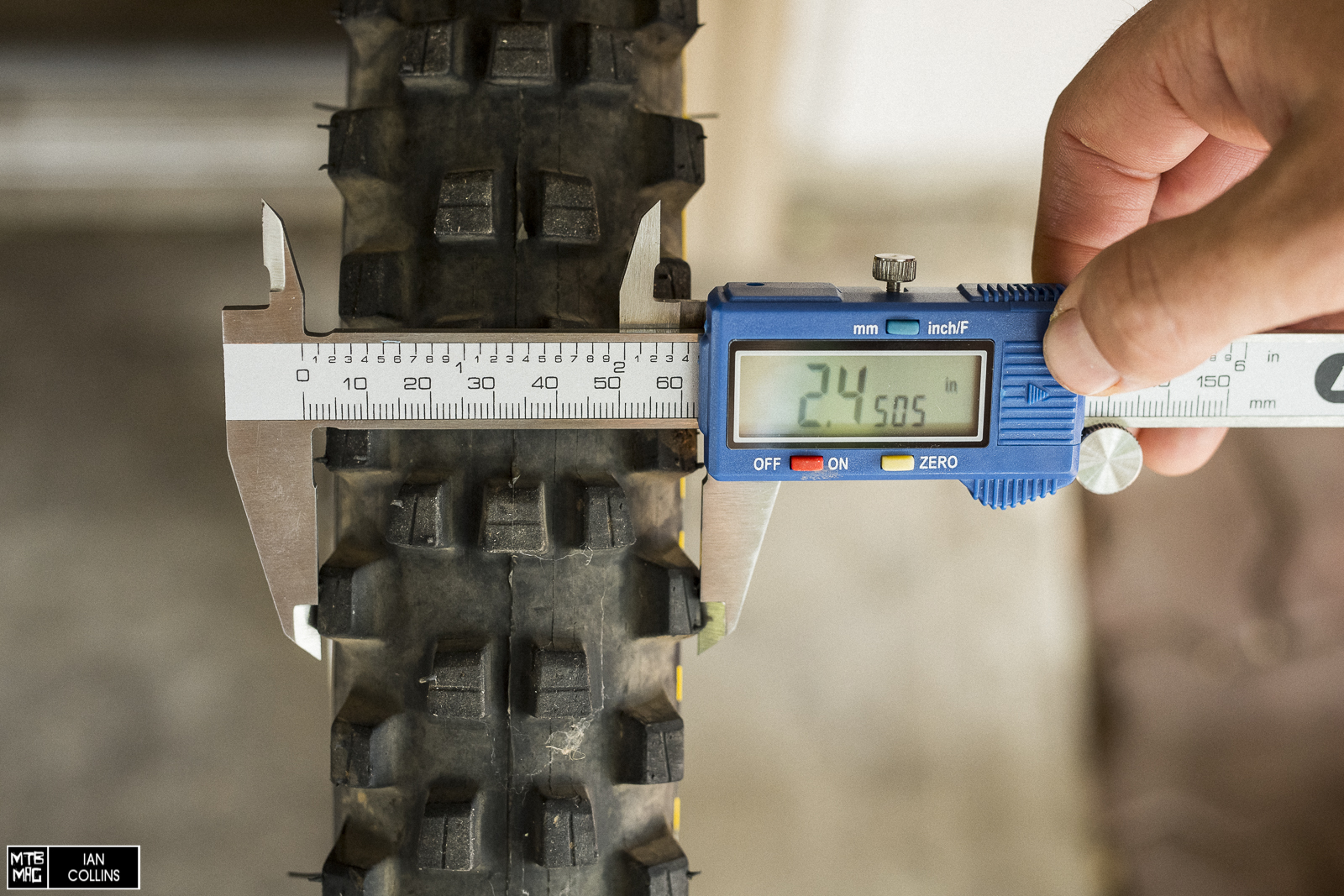 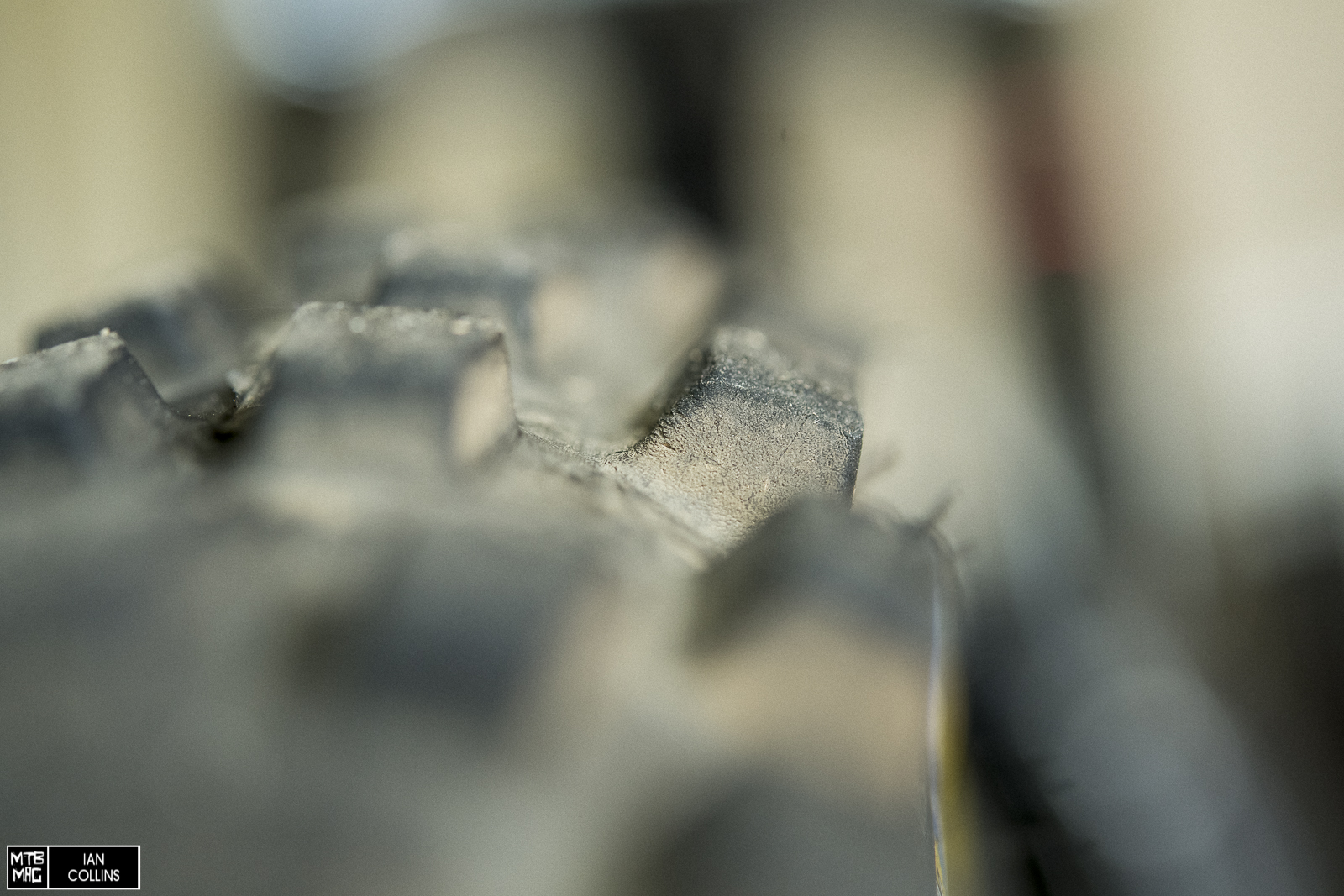 The side knobs alternate in their stance and width, which helps it bite more consistently on varied and inconsistent terrain.

I spent the bulk of my time on the DH22 tires aboard my GT Fury 29″ pictured below, where I rode them front and rear. I also spent some time on a 27.5″ version on the front of my Yeti SB-165. Starting with installation, the bead fit just right – not too loose and not so snug that they were difficult to install. I managed to install them without tire levers, and needed just one lever to remove them. With that in mind, tubeless setup was a snap. If there is one thing that I’ve long hailed Michelin for over the years, it’s having excellent rubber compounds that hit the perfect balance on both the soft / firm spectrum as well as getting the right amount of slow rebound, or rubber damping if you will. The latter being advantageous in the sense that slower rebound rubber compounds tend to remain calmer in low traction situations, where tire knobs that rebound faster can feel skittish, twitchy and unpredictable, even if they are made from a soft durometer. In any case, on both aspects Michelin has aced it yet again. Interestingly, I’ve ridden the DH22 in just about every condition imaginable outside of mud and slick rock. At Silver Mountain I’ve seen firm, loose, loose over firm, loose rock, firm rock, roots, off cambers and blown out late summer conditions. Back in Santa Cruz I did get a chance to ride some softer, natural loamy trails as well. What I can say is that this tread pattern and and rubber compound combination just might dethrone Schwalbe’s Magic Mary as the best all around tire – at least in my mind anyway. Simply put, it has absolutely massive gobs of traction. To date, the DH22 has proven to be the most confidence inspiring downhill tire that I’ve ridden. So far, it has allowed me to wiggle my way out of a great many “oh shit” moments that could have ended badly, in a vast array of trail conditions. At the end of the day that could be its best attribute – versatility. There seems to be nothing you can’t throw at it. 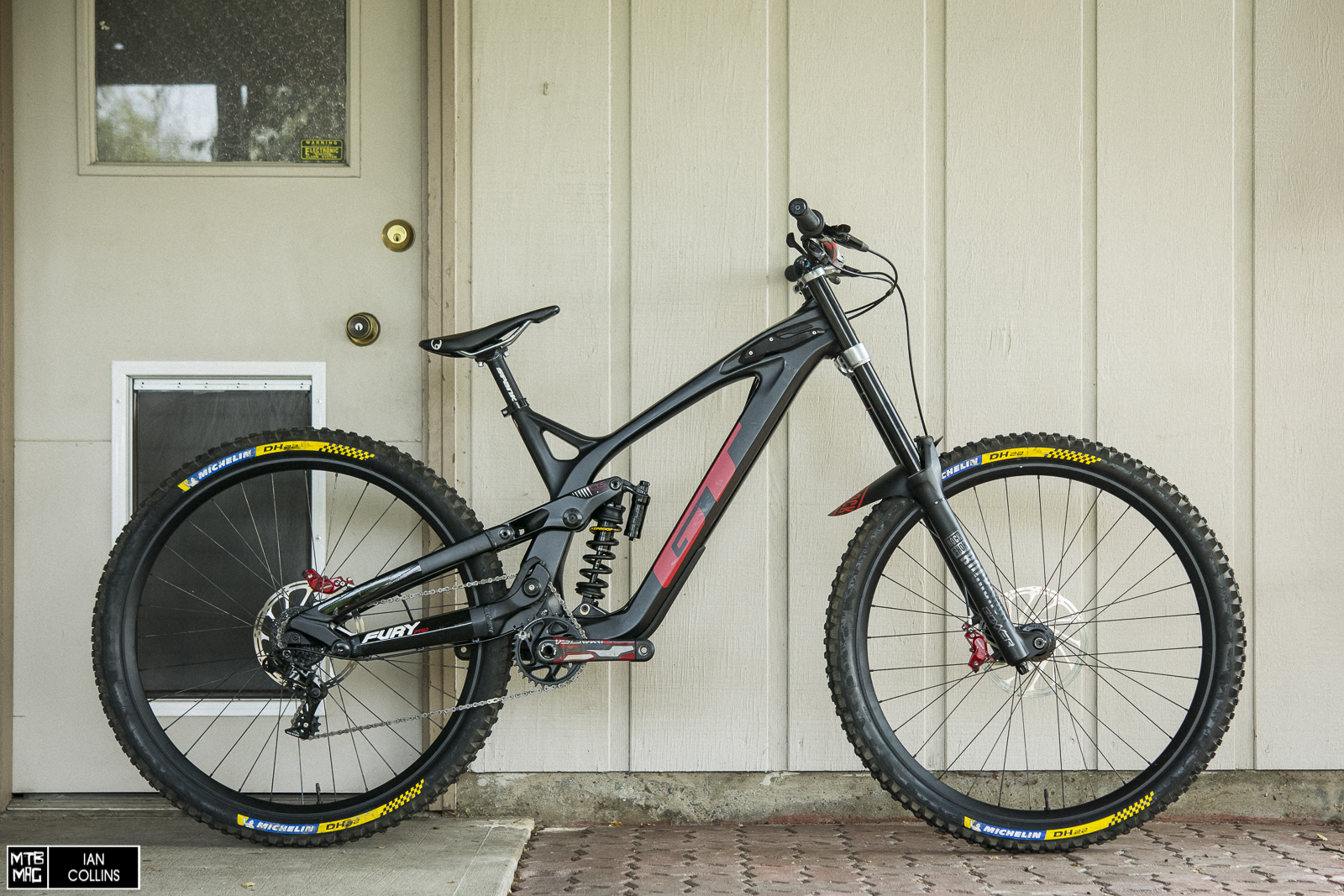 As far as the casing and resistance to flats is concerned, I ran these tires down as low as 21 PSI front and 23 PSI rear – I weigh about 180lbs, for the sake of reference and only needed to go that low on tracks where I was really digging for traction. I found that they worked out admirably in the mid 20’s, while still providing plenty of sidewall support. If I can segue for a second, I’ve spent quite a bit of time on Michelin’s “Wild Enduro” tires on my trail bikes and while the DH22 looks very similar in its tread pattern, it is in fact a bit different. I’ve actually found it to be one of, if not the best trail/enduro tires on the market. Regarding casing, the Wild Enduro has a foldable bead and a substantially lighter casing than the DH22 at around 1,100 grams. With that in mind, I’d love to see Michelin’s lineup widen with the inclusion of a casing that splits the middle with a foldable bead, aimed at Enduro racing that comes in around 1,300 grams. Anyhow, after a substantial amount of time on these tires, I have not flatted and I feel that the durability and wear resistance has been good, with respect to how soft they are. I noticed that while they mainly wore pretty evenly, some of the side knobs were a bit more torn and degraded than others, but alas the place I’ve been riding them is absolutely littered with jagged rocks, so that’s to be expected. Nonetheless, the DH22’s have held up as well as a downhill rated tire should, and they’ve warded off flats impressively – without the use of tire inserts.

After many years away from the downhill scene while the mountain bike world decided on being undecided on wheel size, Michelin has come back swinging and I couldn’t be happier. If you are serious about a high performance DH tire the provides the most possible traction available in a wide range of conditions, the DH22 is likely your best bet. With that in mind, if you’re a park rat leaning toward longevity over all out grip, it might be better to consider the DH34 Park, which uses a firmer compound. At the end of the day, a serious privateer downhill racer could confidently head to most races under most conditions with just this tread pattern on hand and have no complaints whatsoever all season long, although it never hurts to keep spares and mud tires around. Lastly, Michelin – if you’re listening, please make this tire in a 2.6″ width! Signed, a former Comp 32 addict.

[Video] The Making of B-Rage