Back in Spring, during what is typically considered the Sea Otter timeline when many brands launch fresh products, Fox debuted a fully redesigned 34 fork as well as all new rear shock offerings in the form of the DHX and Float X. Taking some notes from their flagship counterparts – the DHX2 and Float X2 – these rear shocks have a handful of features that do cross over, but they feature singular rebound and compression adjustments and a more affordable price tag. For the last few months I’ve been putting them both to the test on my personal bike with a Float X2 as a reference point for good measure. Read on to see how they stack up. 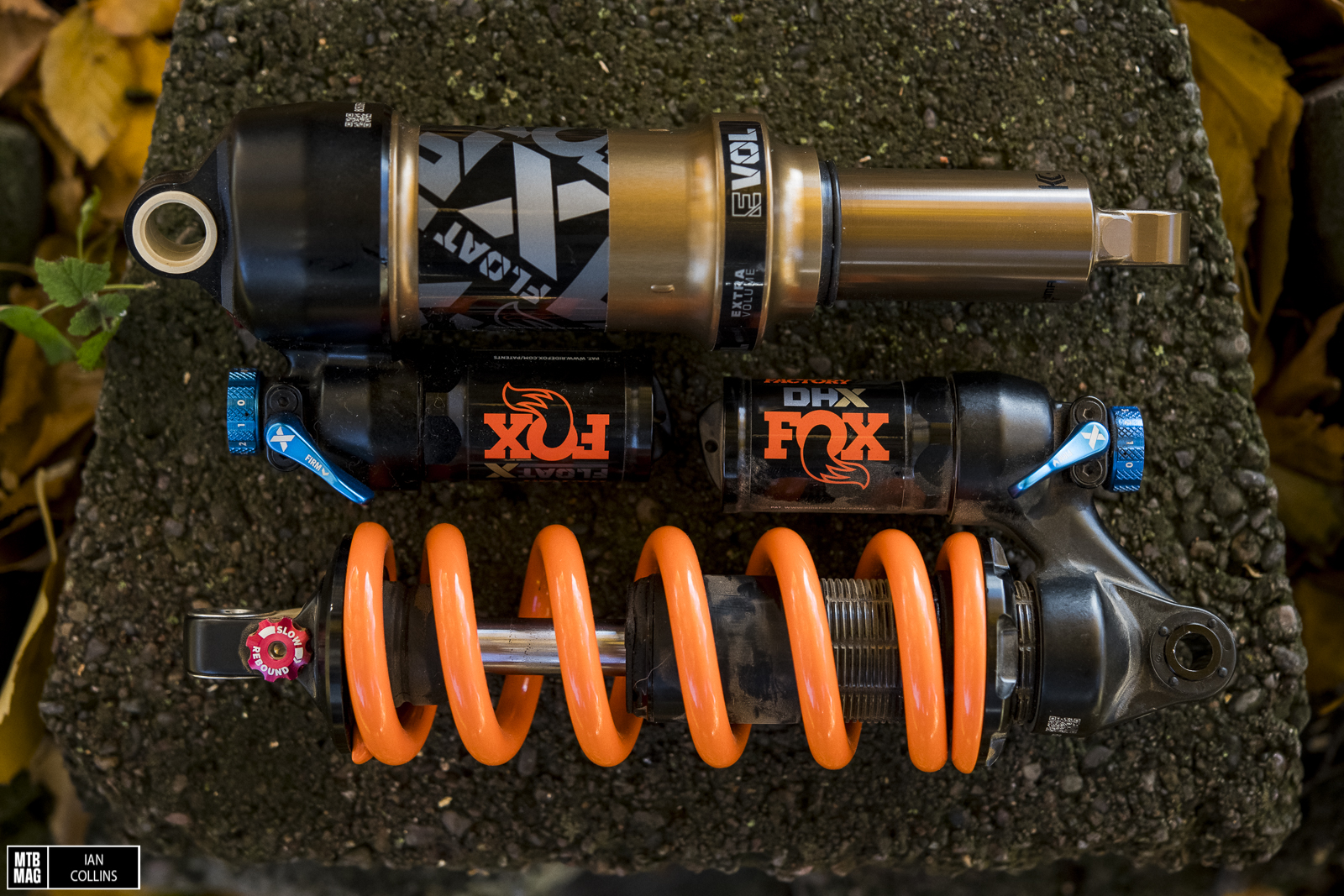 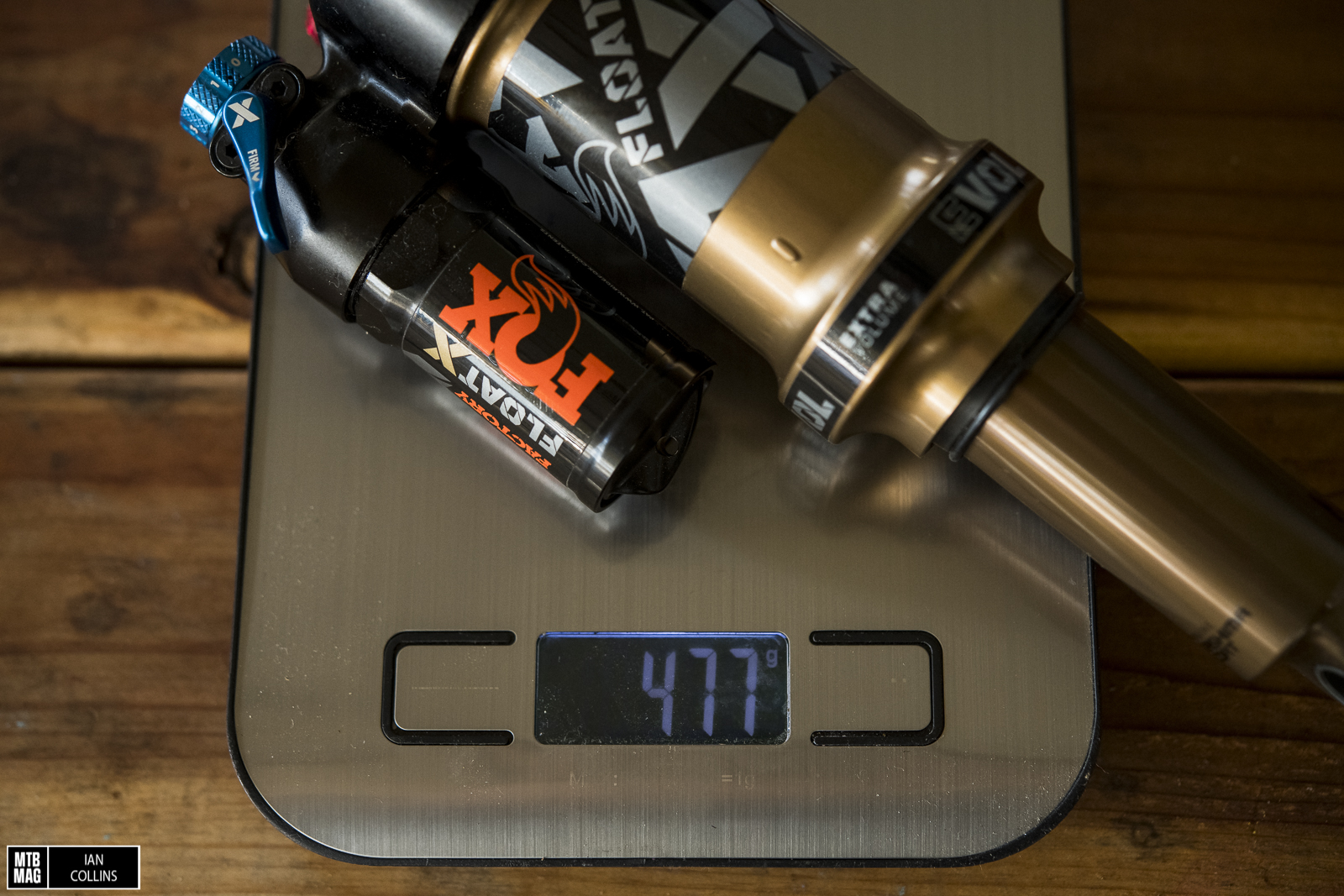 Starting out with weight, my 210mm X 55mm Float X was surprisingly light at 477 grams with the bushings installed and a fairly large volume reducer for good measure. 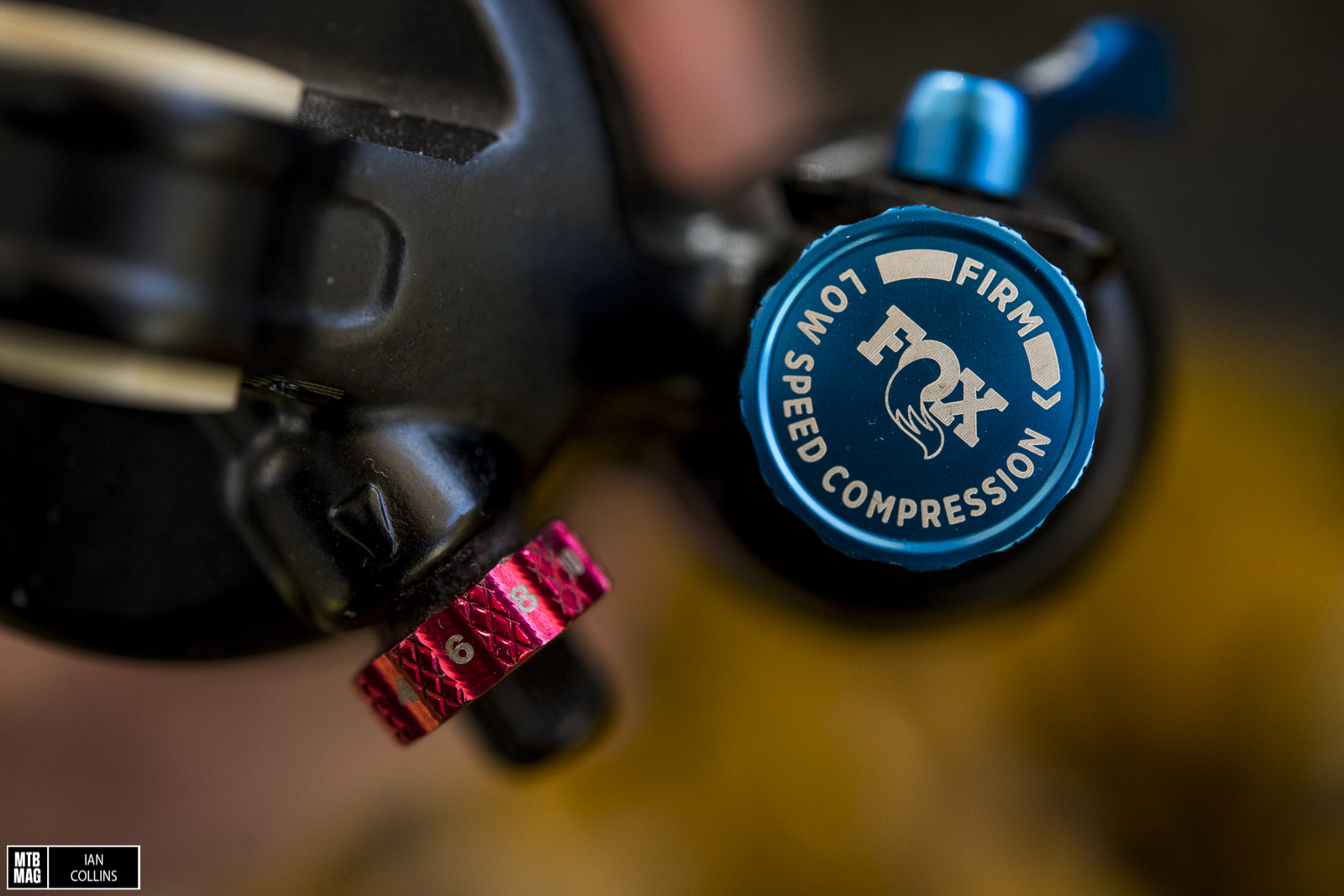 Both the compression rebound adjusters are easy to access, have a nice grabby feel and the detents are easy to detect. 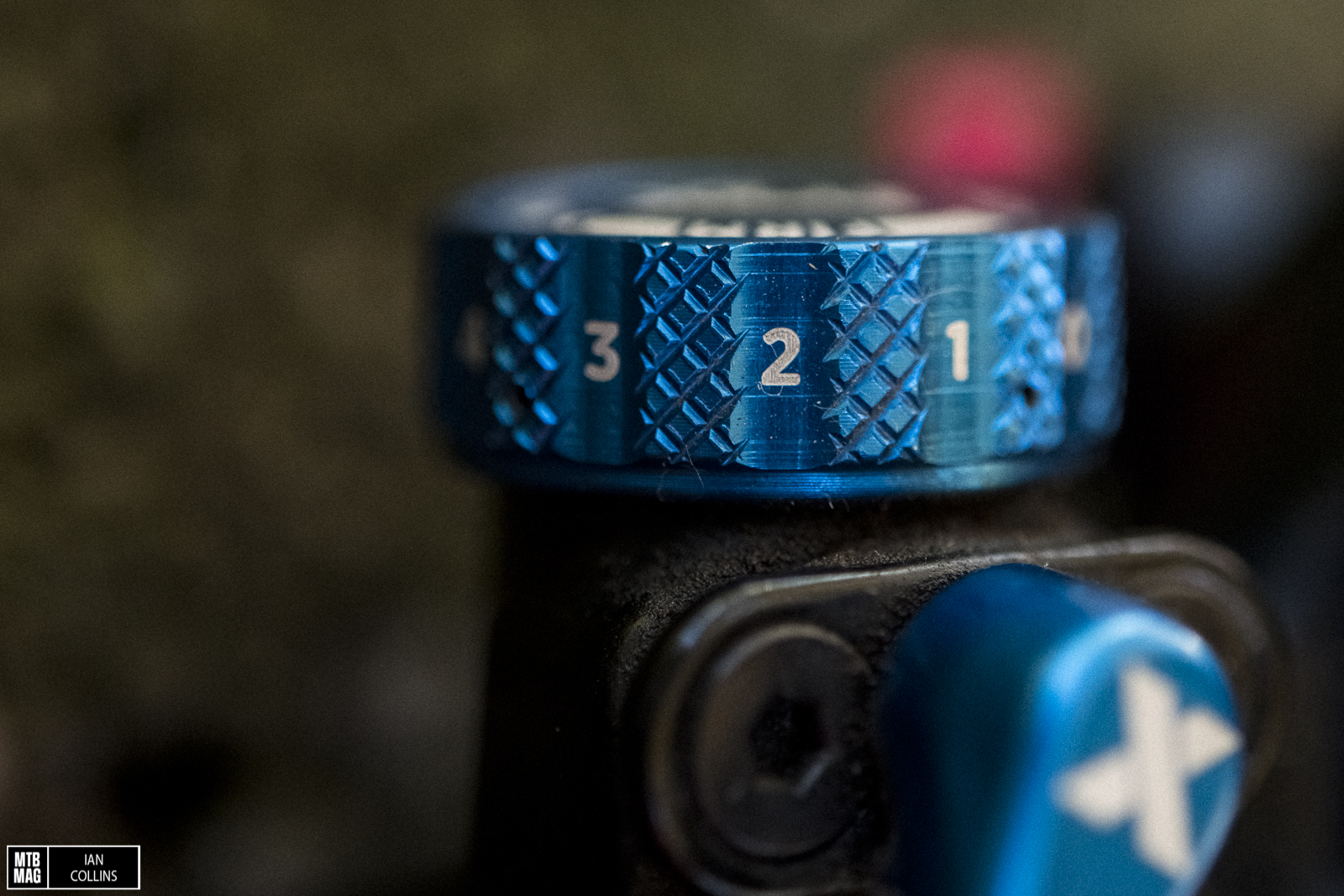 Although I typically go more by feel than anything, I certainly can’t complain about the numbered indicators on the rebound and compression knobs. 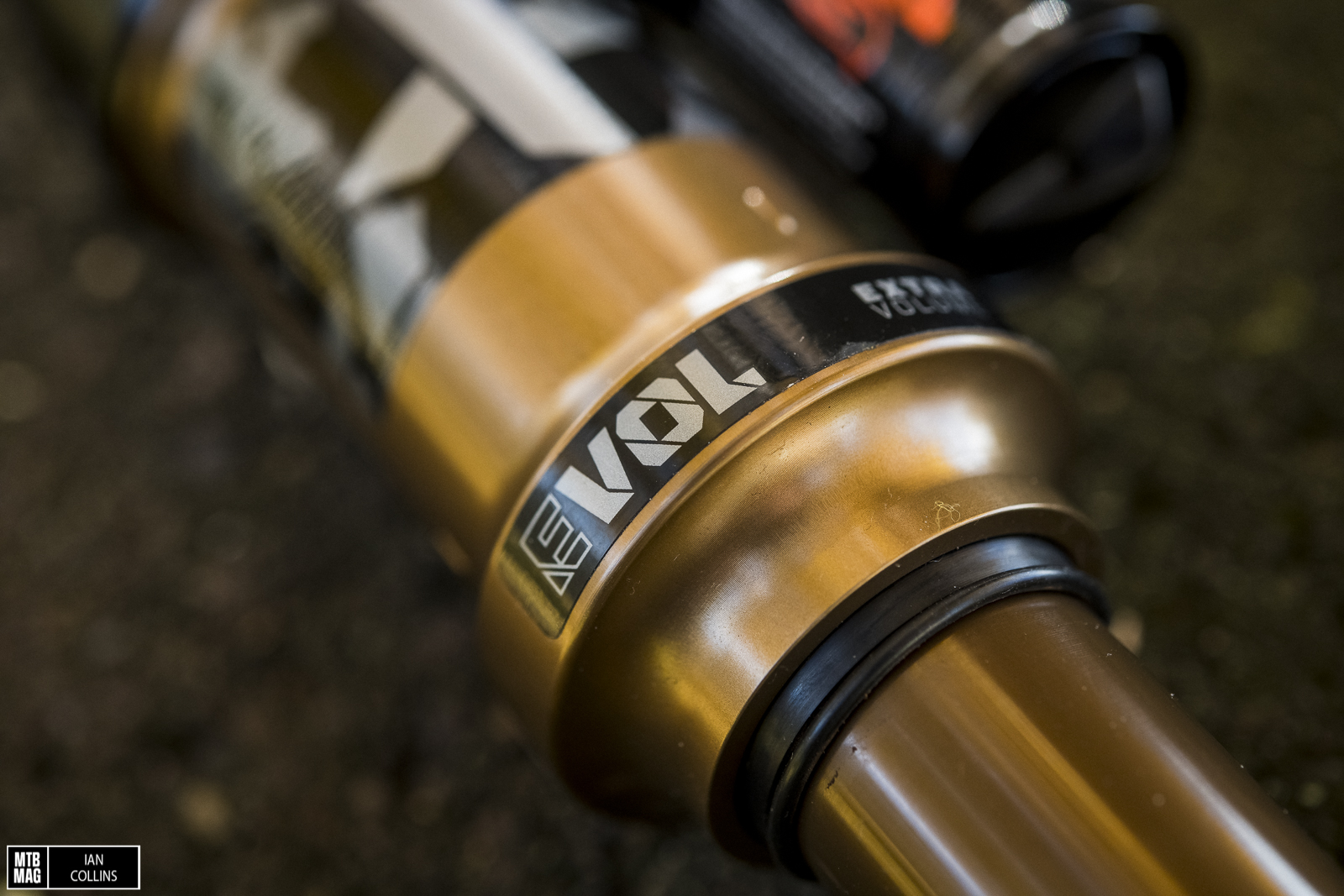 One interesting feature on the Float X is that the air spring bore is larger, which means more air volume. That in turn means lower average air pressures – which is ideal in just about every way. Fox claims an average of 40 PSI lower for most users compared to its predecessor “trail” duty shock – the DPX2. 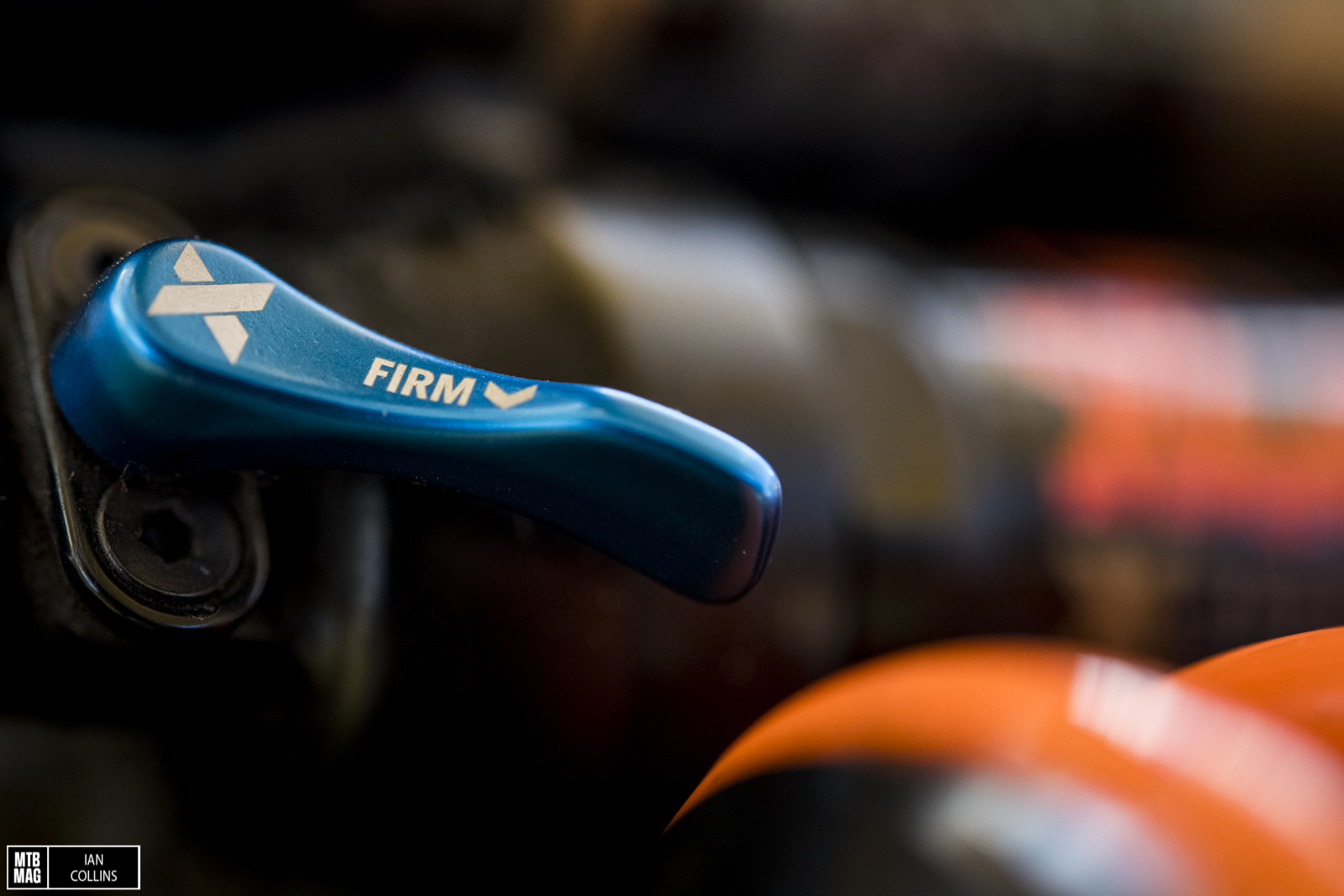 Lastly, a simple two way independent lockout is easy to get ahold of and only requires roughly a 40º flick. Interestingly, you can re-orient the lever facing up or down should you choose. 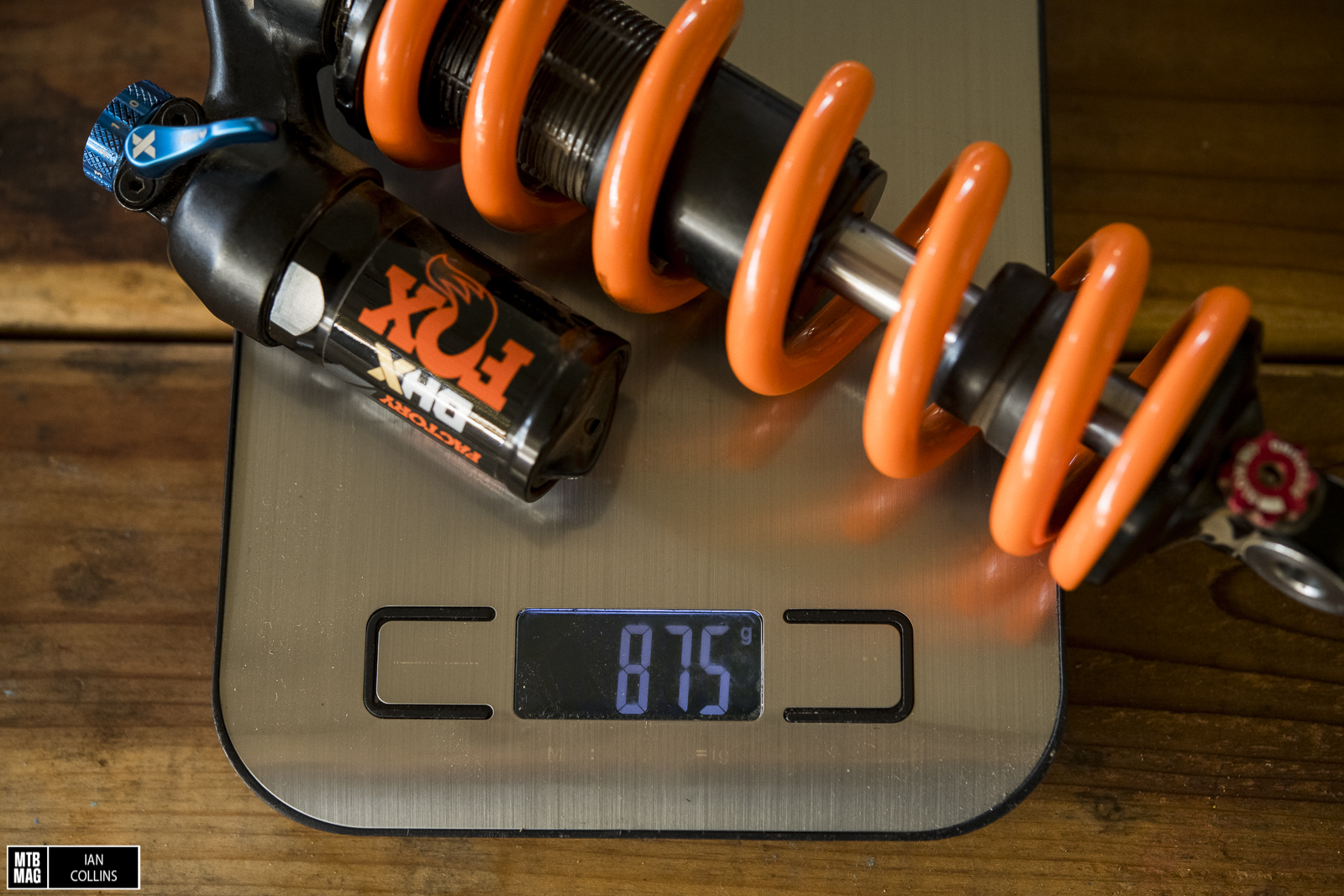 The DHX tipped the scales at a fairly reasonable 875 grams. Keep in mind this weight is with shock hardware and a very stout 600# spring, which despite being the SLS (“super light spring”) model, does have a bit of weight to it. All in all it’s a relatively light weight unit. 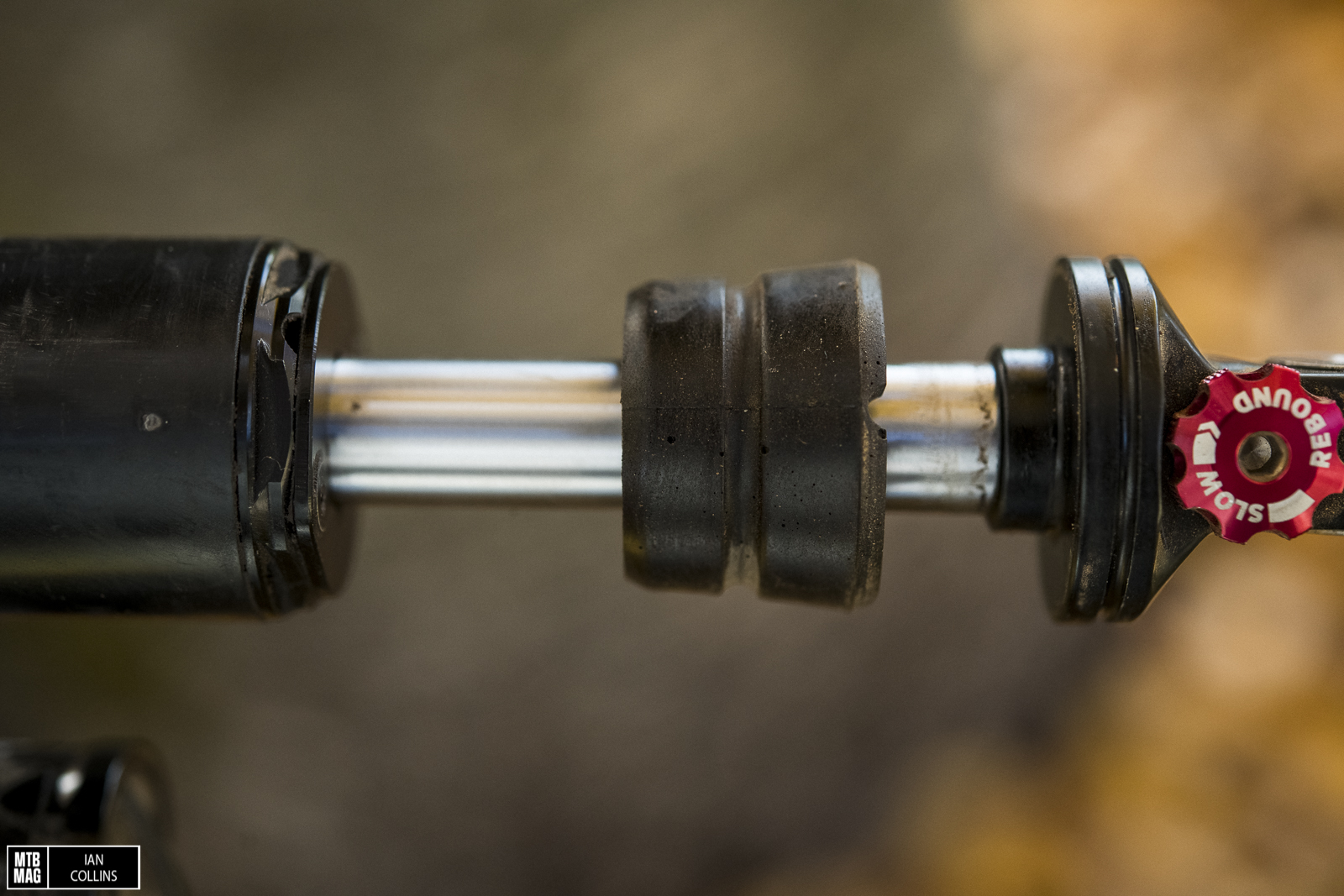 One of the biggest upgrades to every Fox shock from 2021 onward is the larger sized MCU bumper. It makes for a much more seamless bottom out compared to the smaller bumpers that predated it. 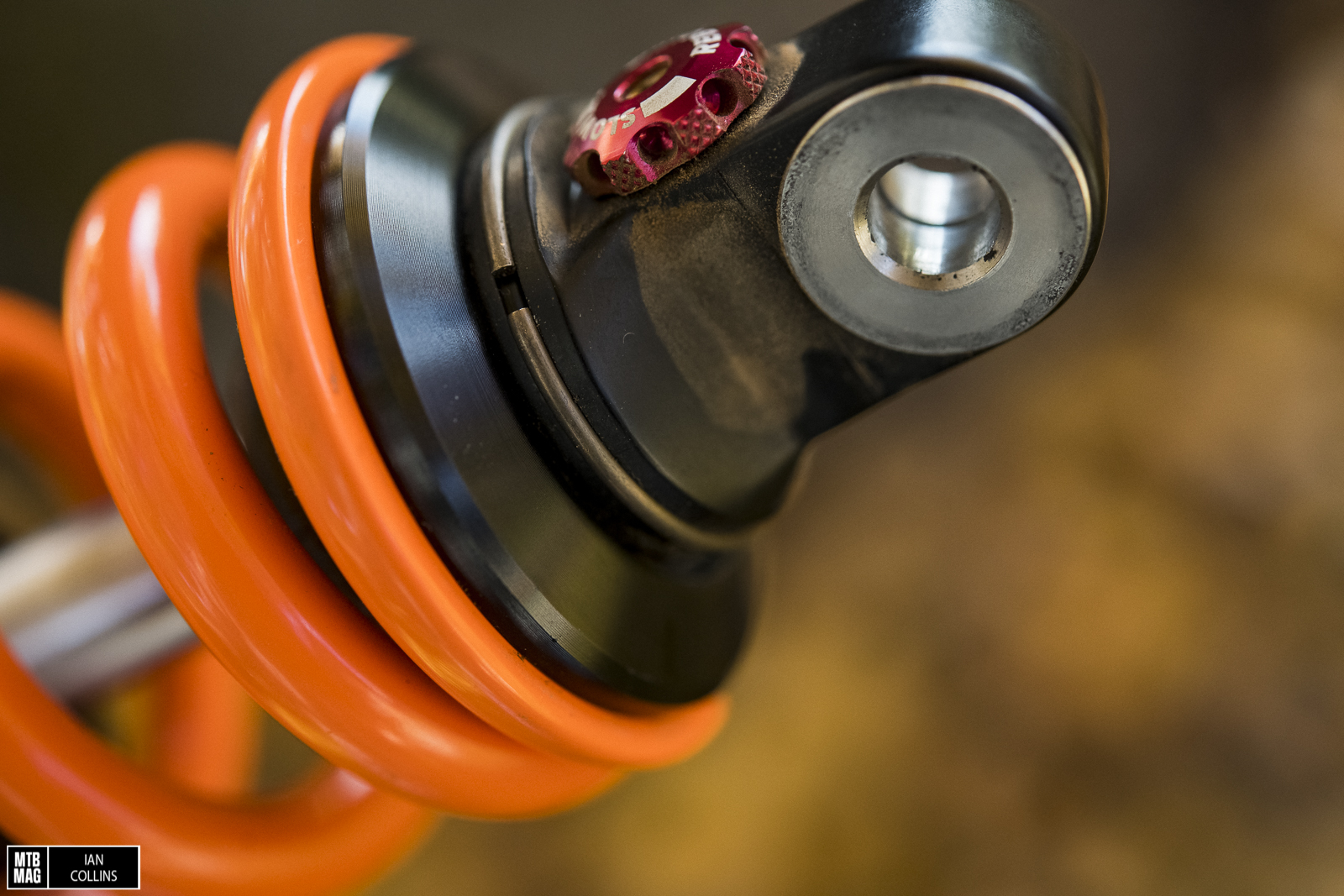 What makes the bottom out bumper even better is that it features a lower spring collar that fully encapsulates it, so it can’t pancake out and become useless on big hits. This requires a circlip ring for installation and removal – which is easy enough to use. 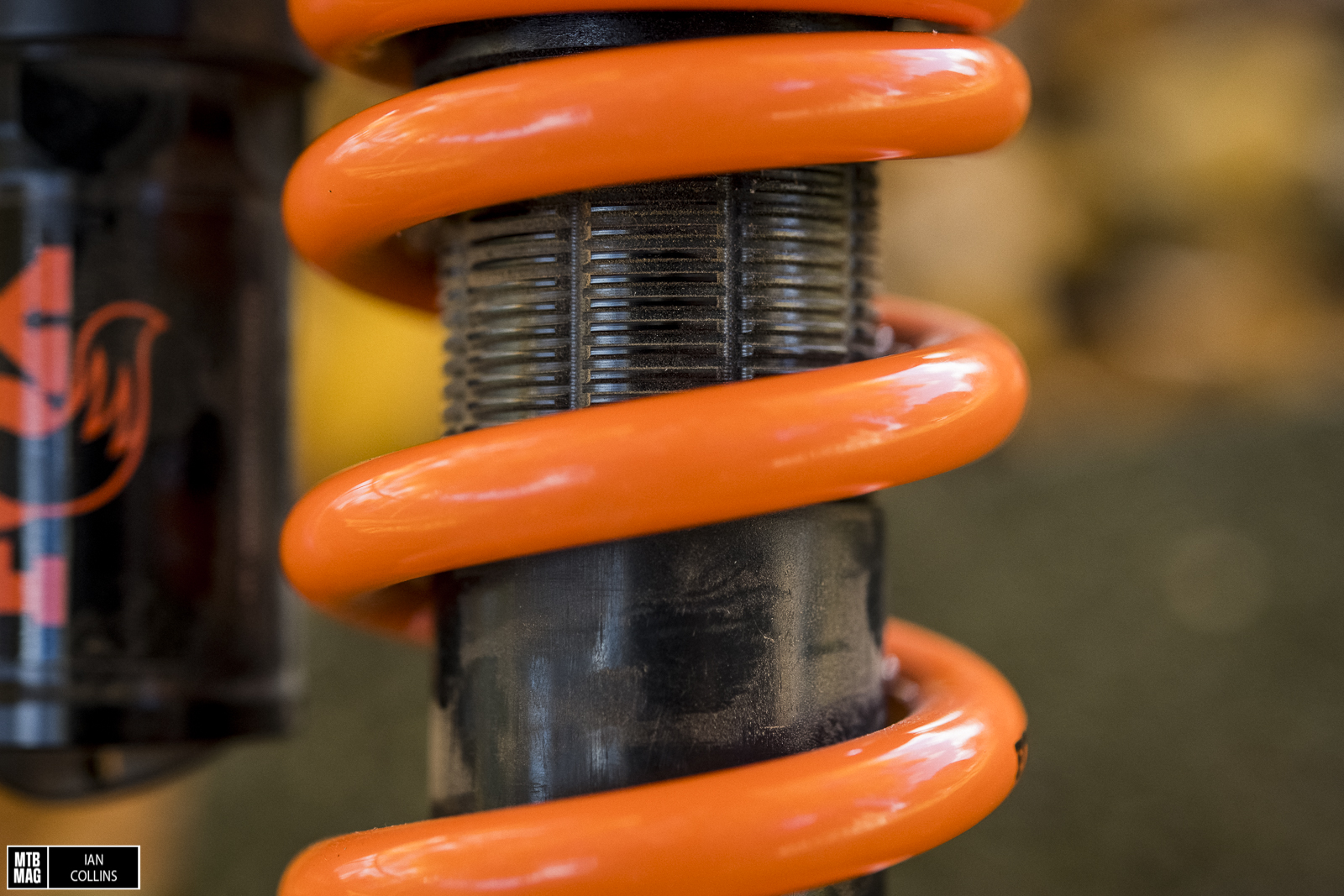 The main shock body has grooves and there are now detents in the upper spring collar. There is also a plastic scuff guard below it to protect the shock from getting marred by the spring when ridden in mucky conditions. 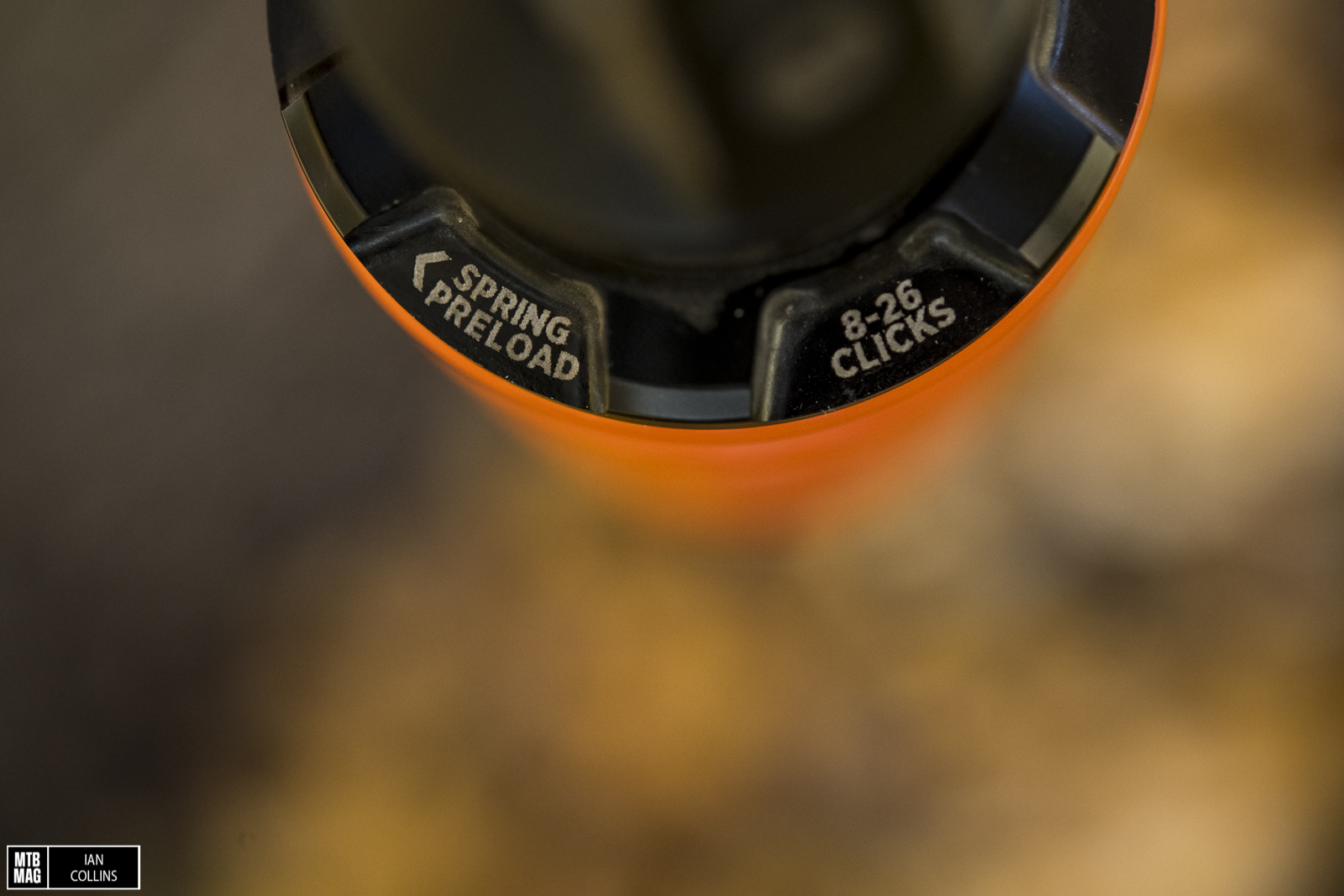 A nice indicator for the appropriate preload range is etched right into the spring collar. The feel of the detents is very distinct and thus easy to count although they do slow down spring removal slightly. 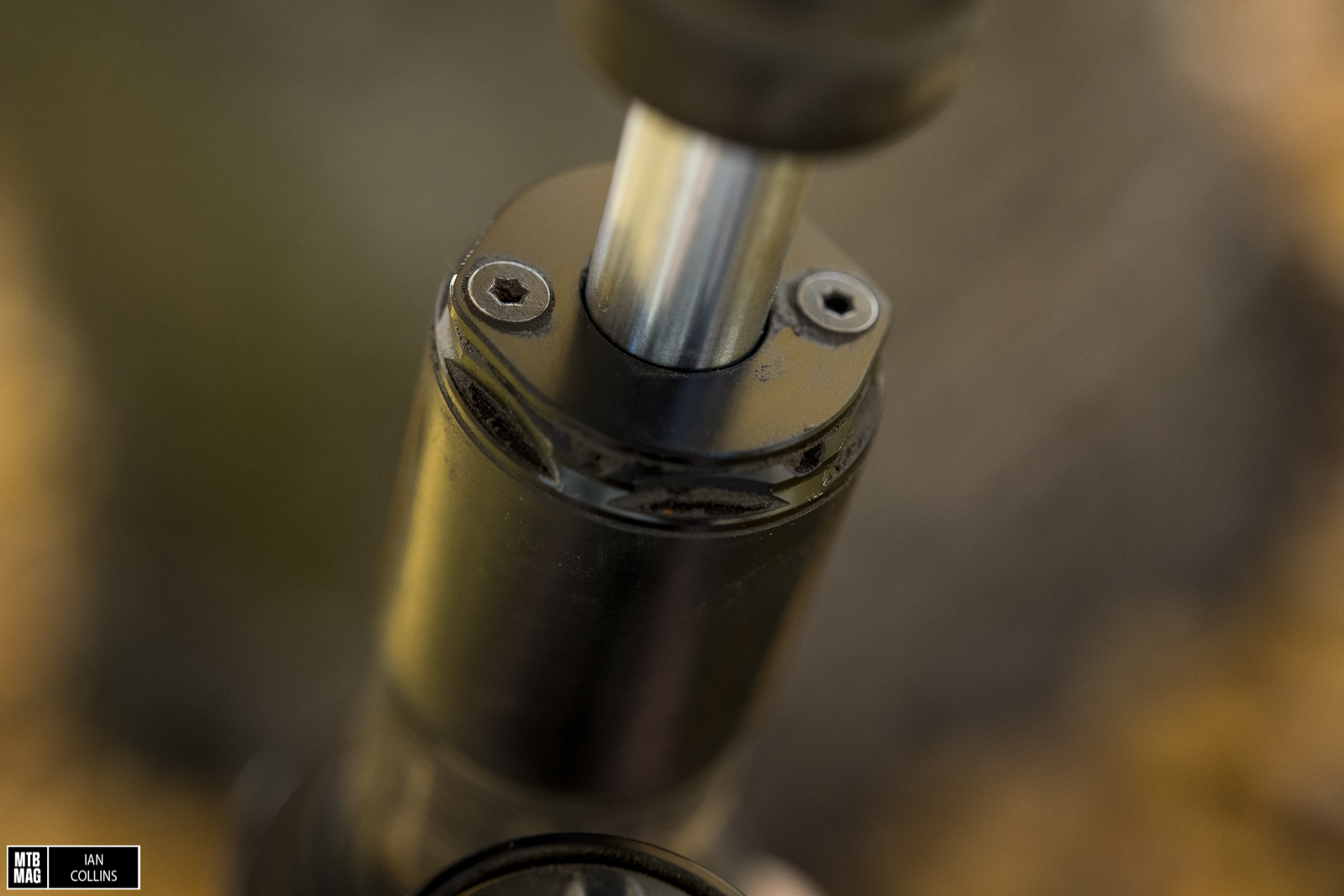 Fox came up with a fairly simple system for changing shock stroke travel within a given eye to eye length body. For example, my 210mm X 55mm shock shown above could be limited to a 52.5mm stroke or 50mm stroke by loosening the two 2mm screws and installing 2.5mm or 5mm spacers, respectively, between the plate and the shaft seal. It’s nice that this is now something that can be done at home, so if you feel like experimenting with a reduced travel option it’s a simple procedure with no oil or special tools involved. However, just remember that if you’re removing spacers, it’s always best practice to check with your frame manufacturer and verify clearance for a longer stroke.

As it pertains to this review, I’m mainly considering the DPX2 and the old DHX as baselines for comparisons to the Float X and new DHX, respectively. Also under consideration is where these shocks stand relative to the rest of the market and compared to the flagship units that Fox offers. With that in mind, beginning with the Float X, I was very impressed right away. It feels smoother and more refined than the DPX2 in just about every situation, but above all it resisted fade and managed heat better during longer and rougher runs. As a lighter duty shock body, it is impressively composed on burly terrain. True to claim, I was able to run 35PSI less than I did on the same bike with a DPX2 and 50PSI less than I do on the Float X2 for what it’s worth. At 175 pounds that provided some advantage to me, but it will be of even greater benefit to heavier, aggressive shredders as they won’t need crazy high pressures. As far as the damping adjustments go, I much prefer the broad usable range in low speed compression combined with a simple on/off lockout. The DPX2 had a relatively useless LSC adjuster that required a multi tool and a 3-way lockout with a seemingly pointless middle “trail” setting and a lockout that wasn’t quite firm enough. The Float X improves on these aspects in big ways and it’s worth pointing out that the rebound range has been greatly improved. With DPX2 I would often struggle – finding myself between clicks – but this is no longer the case and I now have three or four very usable clicks for rebound.

Regarding tuning, perhaps best of all, there is a huge range in the air spring curve. Fox offers six different volume reducers for the Float X. They come in .2 cubic inch increments. Five of the six are pictured below – not shown is the yellow one which was in my shock. Anyhow, rather than stack 1, 2, or 3 reducers as you would with a RockShox Super Deluxe – arguably its main competitor – there is much broader overall range and better fine tuning at your disposal with this unit as it offers 7 total potential options. Props are also due to Fox for color coding and imprinting the actual volumes on each reducer; having a metric to refer to is nice. So, anyhow – what does this mean on trail? Well, it is highly unlikely that you’ll struggle to find the right air spring curve, which means you’re more likely to get the feeling you’re after on trail. Lately, I’ve been running a slightly more linear setup on my bikes when I can get away with it. Another aspect of the Float X that I appreciated was that when I opted for a slightly smaller volume reducer (read: less progressive) to open up my mid stroke compliance, the bottom outs weren’t all that harsh. This is likely due to the larger and much improved bottom out bumper. So, you can get away with a more linear setup without experiencing jarring bottom outs – that’s undeniably a good thing. As far as the DHX was concerned, right away I greatly appreciated the design improvements that overlap with the Float X – mainly the aforementioned new approach to the low speed compression and the lockout. I also loved the aspects this shares with DHX2 – its more expensive counterpart – such as the detents in the spring preload collar and above all, the captured bottom out bumper that’s now more substantial. While loads of mountain bikers entertain the idea of putting a coil sprung shock on their mid travel bike, not every bike is designed to accept one – at least not optimally anyway. One of the larger setbacks in a coil swap is that coil sprung shocks don’t build up pressure at the end of the stroke like an air spring does. Thus, coil sprung shocks with sub par bottom out bumpers can be particularly difficult to get along with. I found that even on my personal bike which leans toward the more linear end of the spectrum, the DHX warded off harsh bottom outs extremely well. It’s worth noting that the DHX builds up a little more pressure (read: progression) hydraulically as well, compared to the *old* DHX2, which seemed to blow through its travel quite easily.

Regarding tuning, something I’d like to give Fox some props for on the coil spring side of things is that they offer their SLS springs in 25 pound increments. Far too often I’ve been stuck on their competitors’ shocks in between 50 pound increment springs and found myself searching the depths of the internet for overpriced third party springs from Europe while beating my head against the wall. As far as tuning goes on the damping side, I’m a total geek, so I do like playing with high and low speed compression and rebound. That said, I didn’t exactly miss it at any point – the DHX is a very utilitarian offering. Most riders will get most of what they need and want out of it most of the time. I never hit a wall where I felt like I really wanted to be able to parse out and separate high and low speed adjustments on either end. To me that indicates an overall damper design that is well laid out and broadly applicable, but keep in mind I did only test this unit on one bike. That said, I look forward to trying it on others. On the whole, I found the DHX offered supple action with loads of traction and sensitivity. My wheel felt glued to the ground and its overall behavior was calm and collected, even on brutally long descents that topped out near 4,000 feet at once.

For the most part, this is a story of a slew of seemingly small changes adding up to a big improvement in the sum of the parts. Fox has made a big step forward with both of these shocks. On the Float X end of things, I think it’s positioned as the leading “trail” weight rear air shock, with the Float X2 edging it out as a heavier duty – and thus, heavier – option that’s priced a bit steeper due to a more refined damping circuit. As regards the DHX, it’s an extremely worthy replacement to the last DHX – a chassis that seemingly lived on forever and did a damn good job over a decade plus on the market. It’s hard to call a ~$550 shock “budget”, but in the coil world, it is safe to say that the DHX offers the best bang for the buck. At the very least, it’s a safe way to swap to a coil shock on your trail bike if you’ve been curious about testing those waters. As far as deciding between the two, functionally and feature wise there is quite a bit of overlap. I would recommend basing that decision more off of your bike’s kinematics and your personal needs above all else. For more linear bikes, you’ll likely want to lean more toward the Float X, and for more progressive bikes why not throw the DHX on? All in all, I can’t think of much, if anything, to pick apart about either unit. Fox has been on a roll lately – balancing high performance and value nicely throughout their lineup.