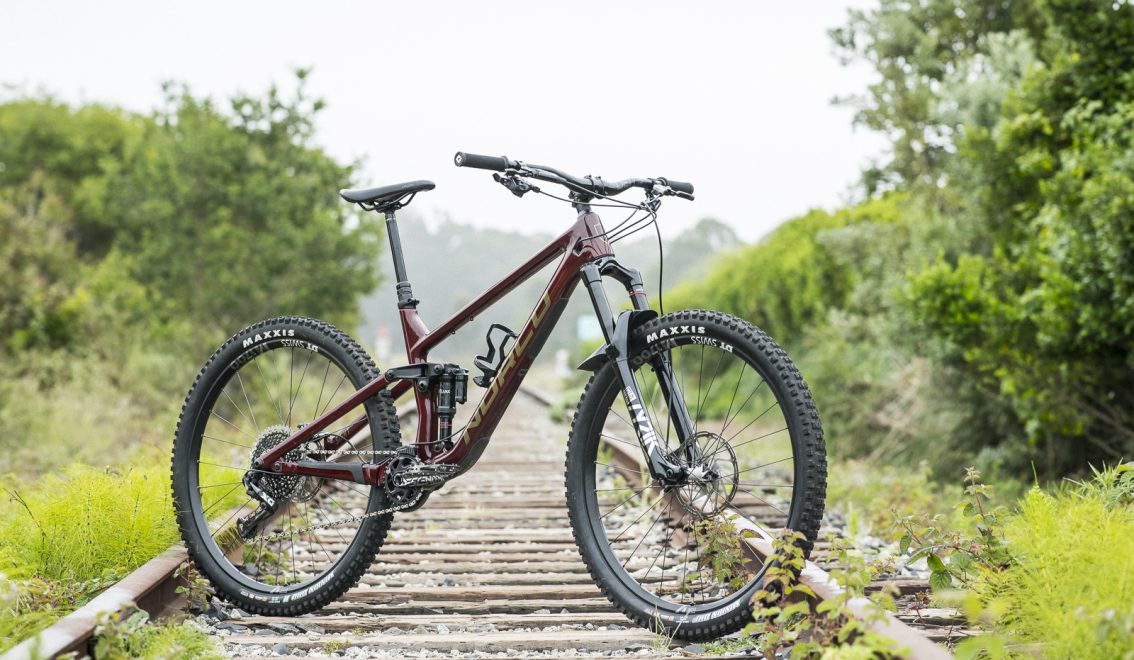 Norco’s Sight lands squarely between the Optic and Range, putting it technically in the “All Mountain” category and making it the most bread and butter mountain bike in the Canadian brand’s lineup – you could say it’s the closest thing they have to a one and done bike. The Sight is available in either wheel size, with aluminum or carbon fiber frames in a broad range of spec levels for both men’s and women’s models. Norco even offers a “build your ride” custom option as well as a frameset. This Spring I spent some time on the C1 version with 29″ wheels at home in the Santa Cruz area… 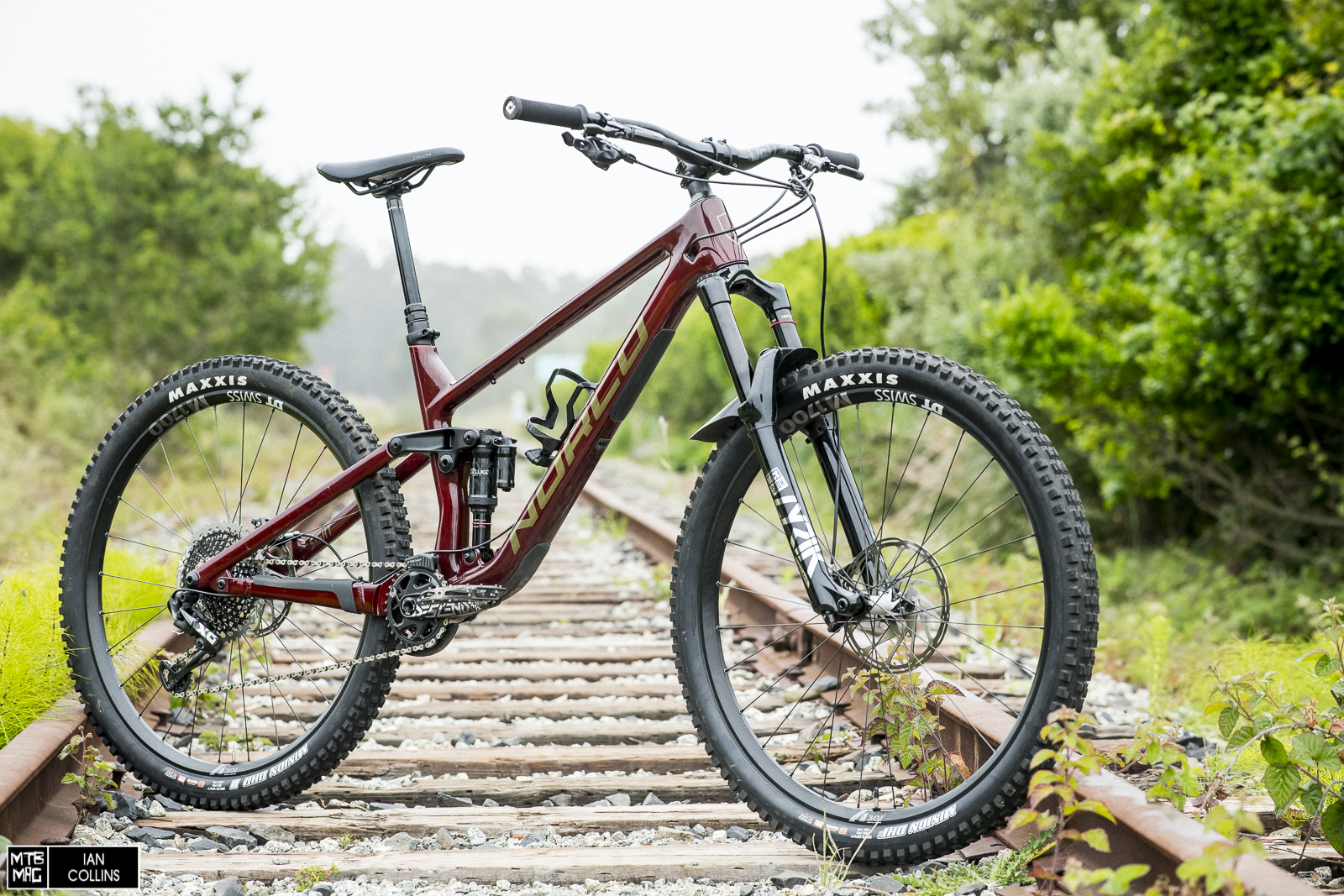 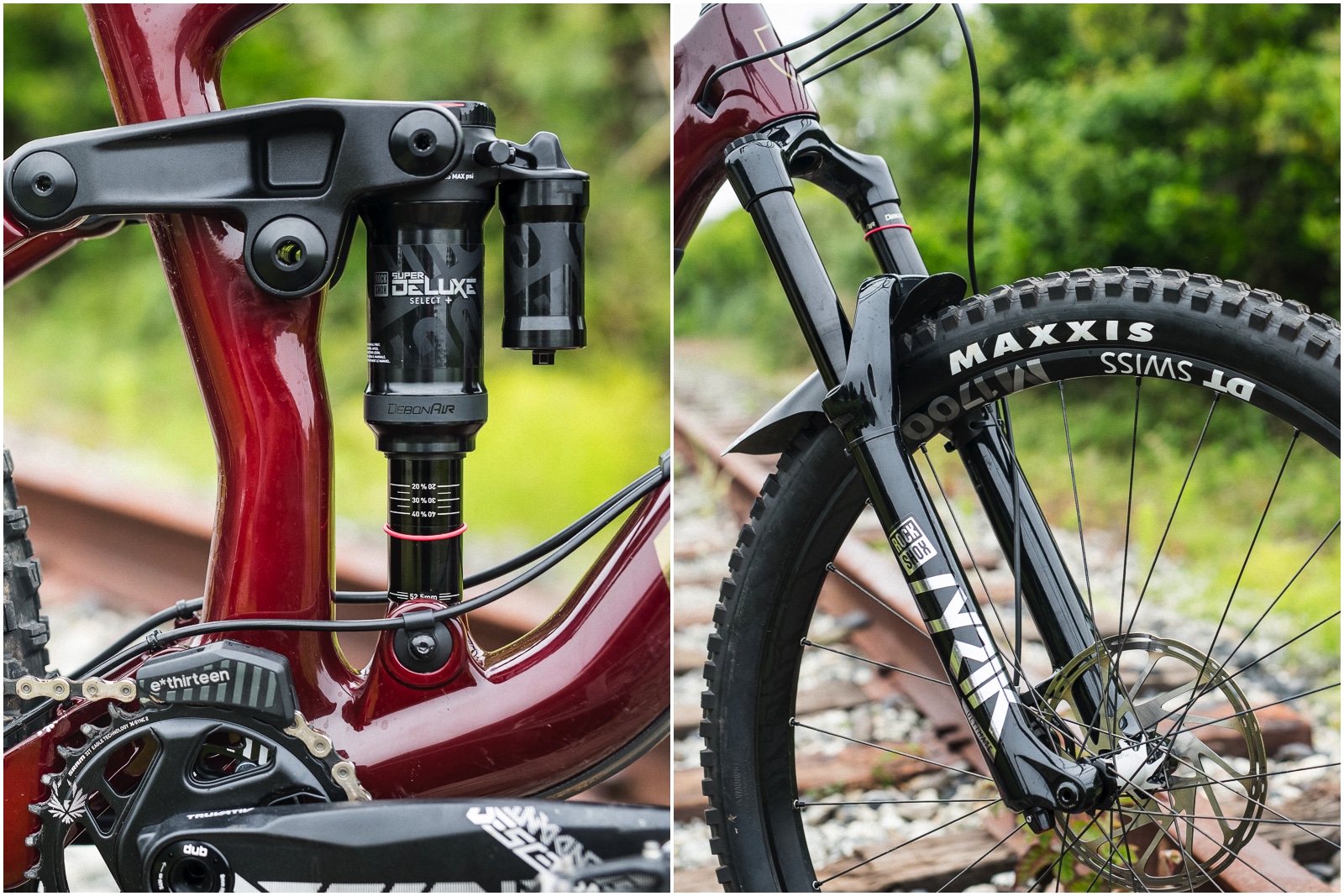 Starting with suspension, on this particular build things are entrusted to RockShox with a 160mm Lyrik Ultimate RC2 up front. High and low speed compression and a single rebound adjustment are externally tunable with a short 42mm offset to match the slack 64º head angle. Out back is the Super Deluxe Select Plus with a 3-way lockout and a single rebound adjuster. The rear shock has just 52.5mm of stroke supporting 150mm of wheel travel, which is a rather high leverage ratio. More on that later… 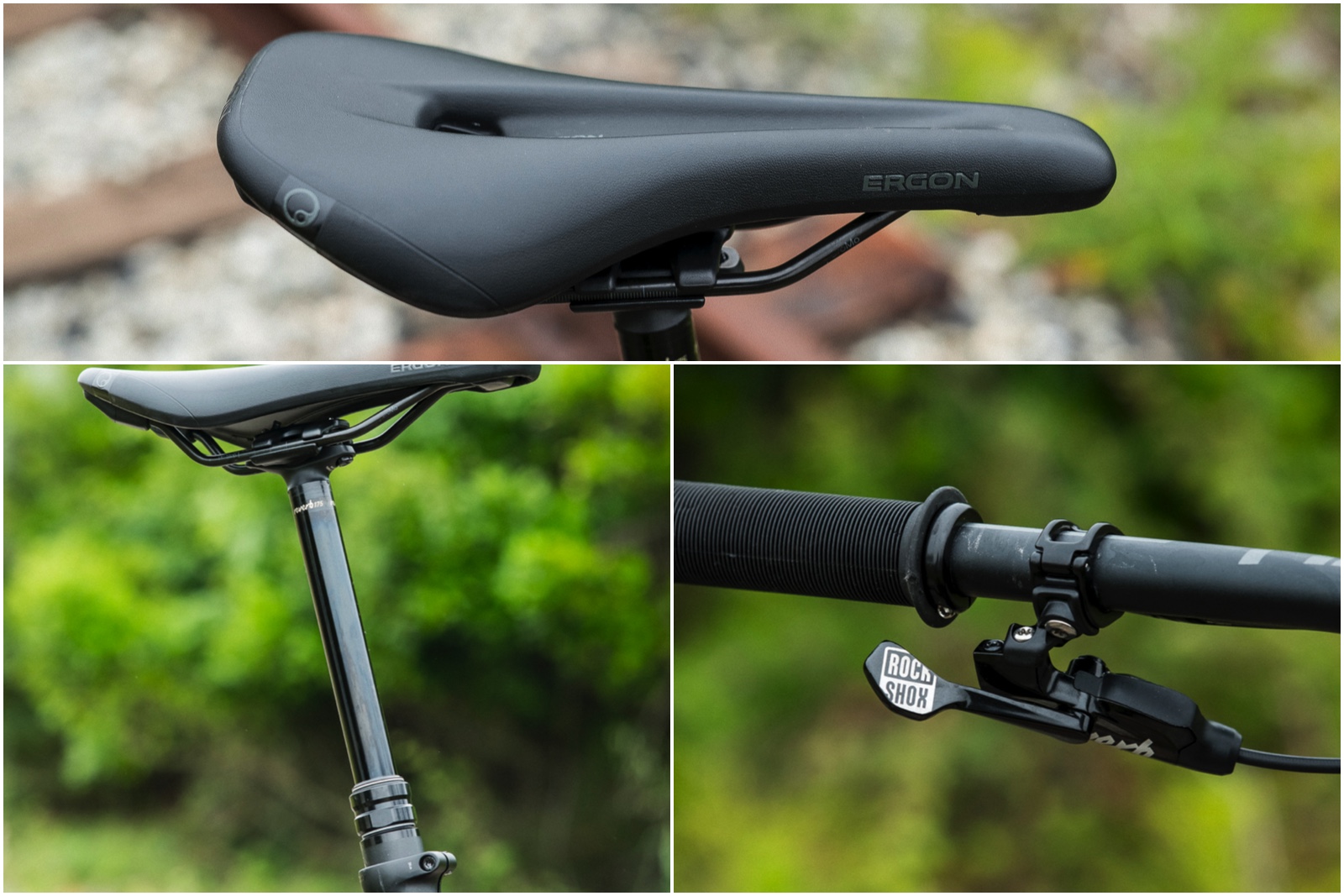 More RockShox kit is featured in the form of the latest iteration of the Reverb dropper seatpost along with a 1X style lever and 175mm of travel and a beefy 34.9mm diameter. The latest version features “vent valve” so you can easily purge any air that has mixed with the oil in the system and thus ridding it of any soggy feeling and starting fresh. In short, it’s a much improved Reverb. Perched above it is the Ergon SM10 Sport saddle, which wasn’t the best, nor the worst saddle I’ve used. 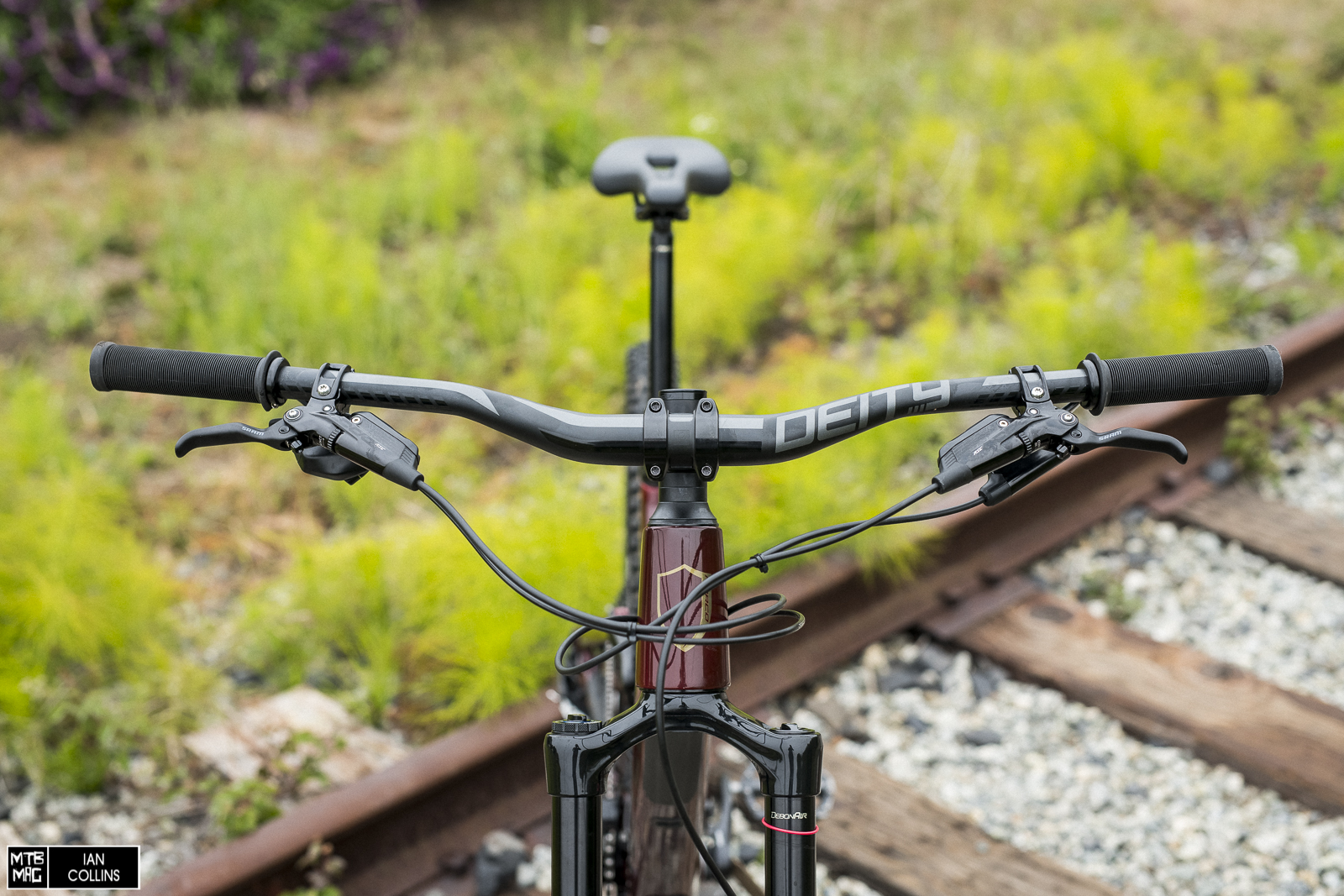 Up front, the bike comes with a sturdy Deity Racepoint aluminum handlebar. It has a 35mm bulge, 25mm of rise and comes in at a full 800mm width. No pictured are a couple of parts that I swapped out. The Sight arrived with a 40mm Norco house brand stem, which I had no complaints with, but simply preferred a longer 50mm stem. It arrived with Ergon grips which I flat out didn’t get along with and just put on some tried and true ODI Longnecks. 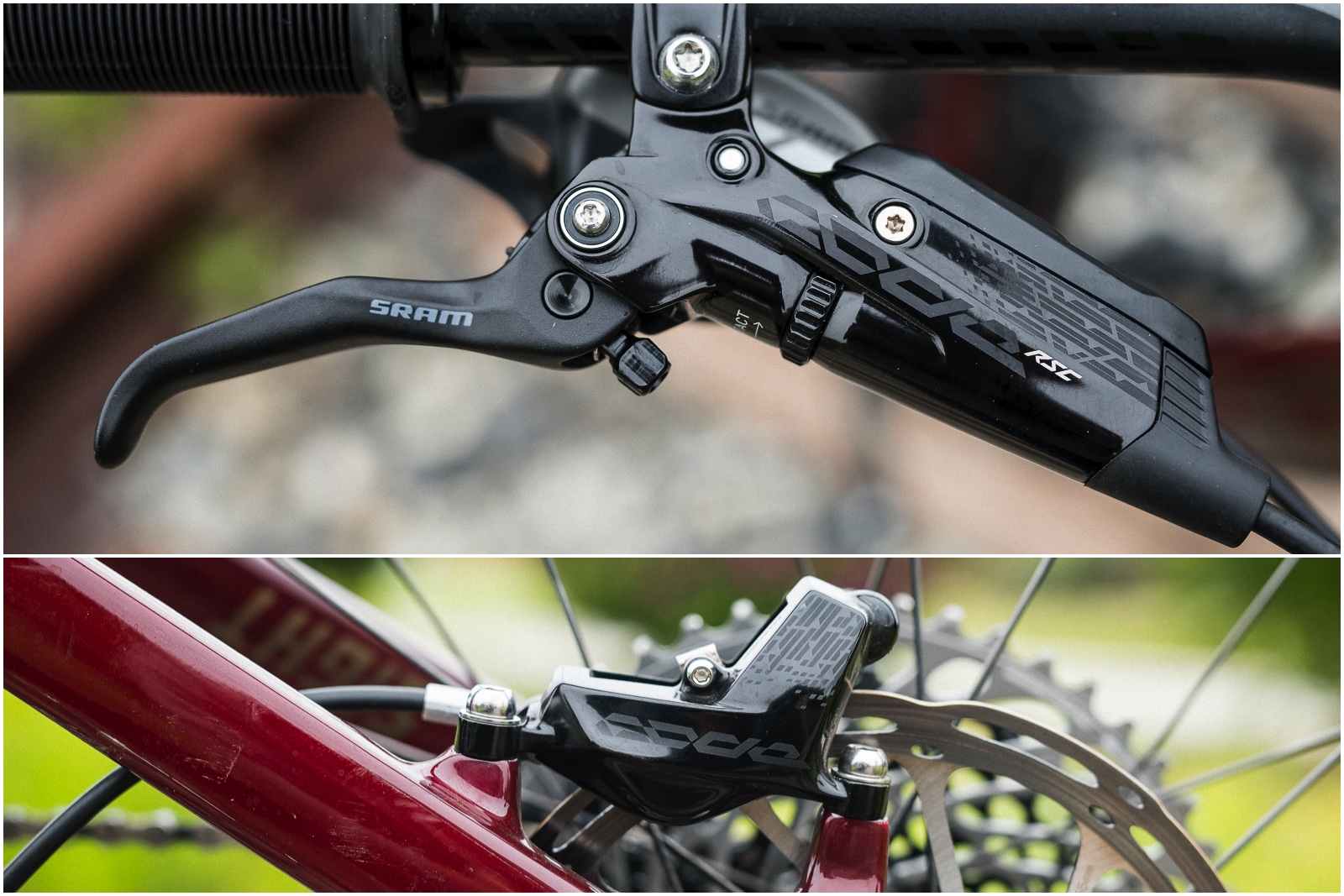 SRAM’s excellent Code RSC brakes handle the stopping with a 200mm front and 180mm rear Centerline rotors, which are just the right size for a bike of this stature. Adjustable reach and bite point are nice for dialing the perfect feel, and the 4 piston calipers delivered plenty of power with a nice modulation on tap. 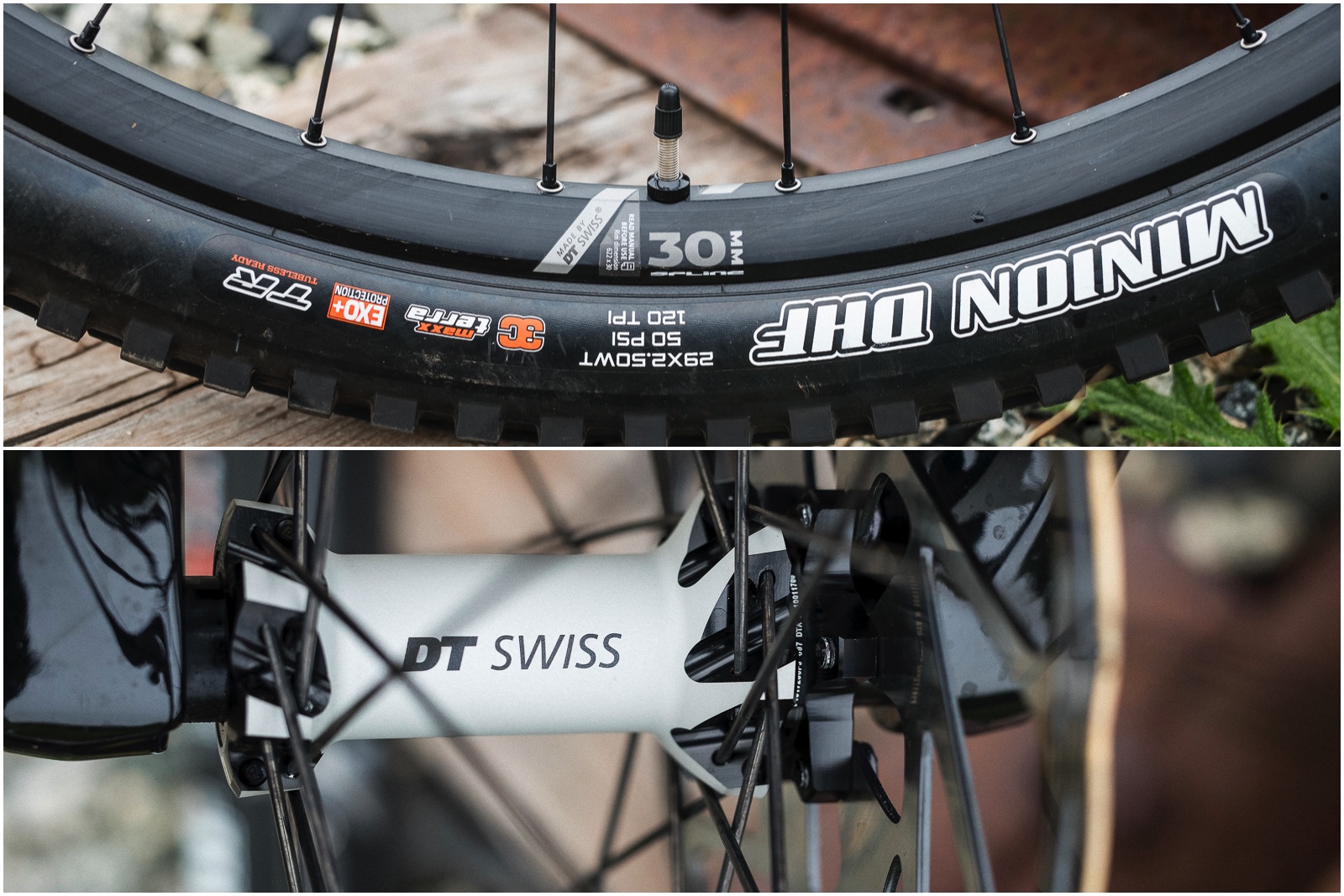 A dedicated DT Swiss M1700 wheelset features straight pull spokes and 30mm internal width rims for a predictable, no frills demeanor. A utilitarian choice, they’re sturdy and reasonably light, but won’t blow you away with ultra snappy handling by any means. The wheels are wrapped in a Maxxis Minion DHF/DHRII combo in 2.5″ and 2.4″ widths with EXO+ casings in the “wide trail” option. Personally, I’ve come to prefer the Assegai up front to the Minion DHF, but alas both are quite popular, so it’s not worth splitting hairs over. 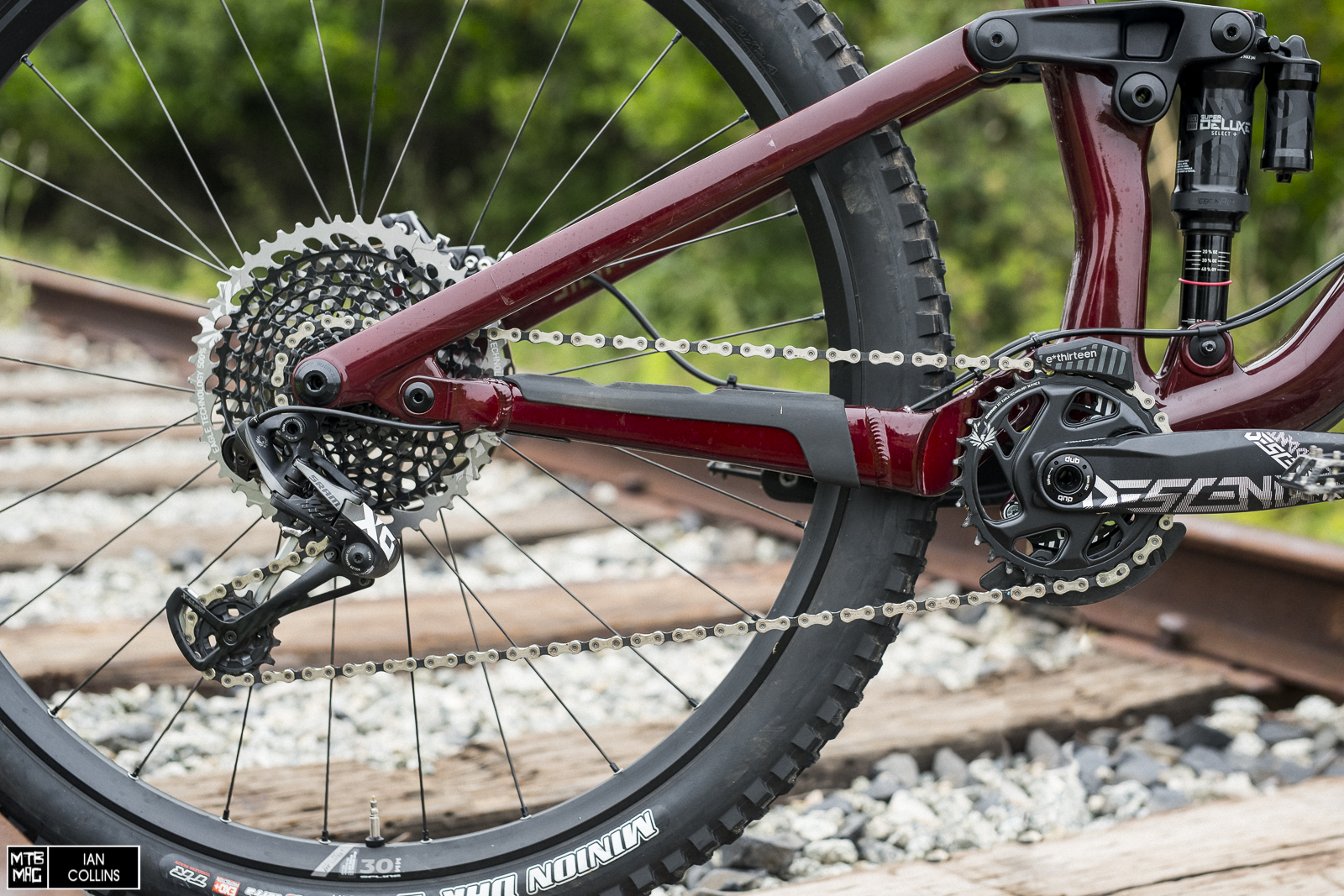 At this spec level, SRAM’s truly excellent Eagle X01 12-speed drivetrain turns the wheels. Aside from the sturdy DUB Descendant cranks, everything else is X01 level (read: high end). Eagle delivers a massive 500% range and super snappy, predictable shifting for all day romps. We were surprised to see a full coverage e*thirteen chain guide, but remembered that as a Canadian bike brand, it makes a bit more sense. It also helps explain away a couple hundred of the extra grams. 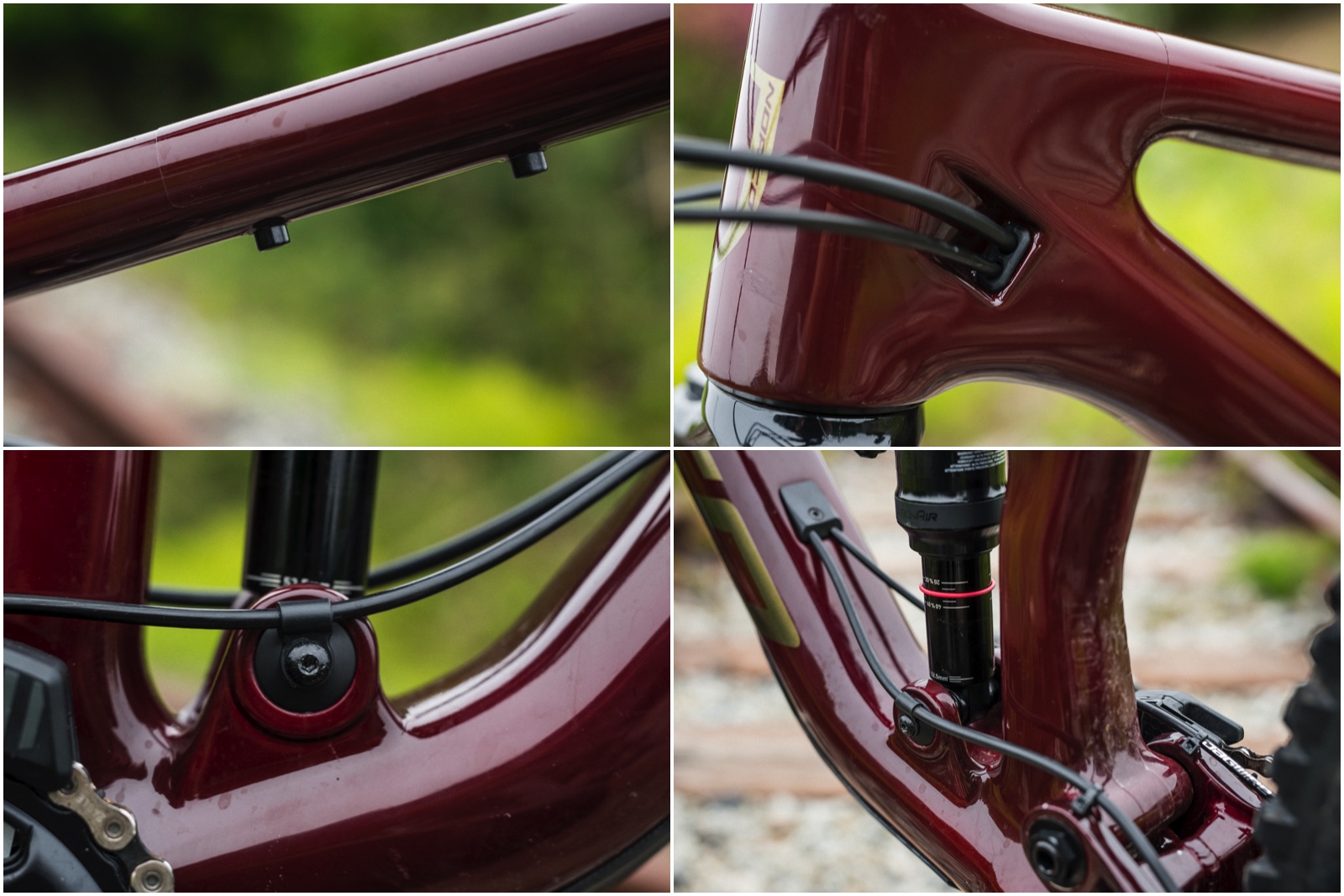 Some notable features for keeping things tidy, clockwise from upper left: The Sight features mounts for Wolftooth’s genius B-Rad system under the top tube. On both sides of the frame, rubber grommets are fitted to the cable/hose entrance ports on the frame. The derailleur cable and brake hose follow a nice clean line out of the bottom of the downtube. Lastly, nifty guide tabs are fitted to the shock hardware to prevent cable rub on the frame. 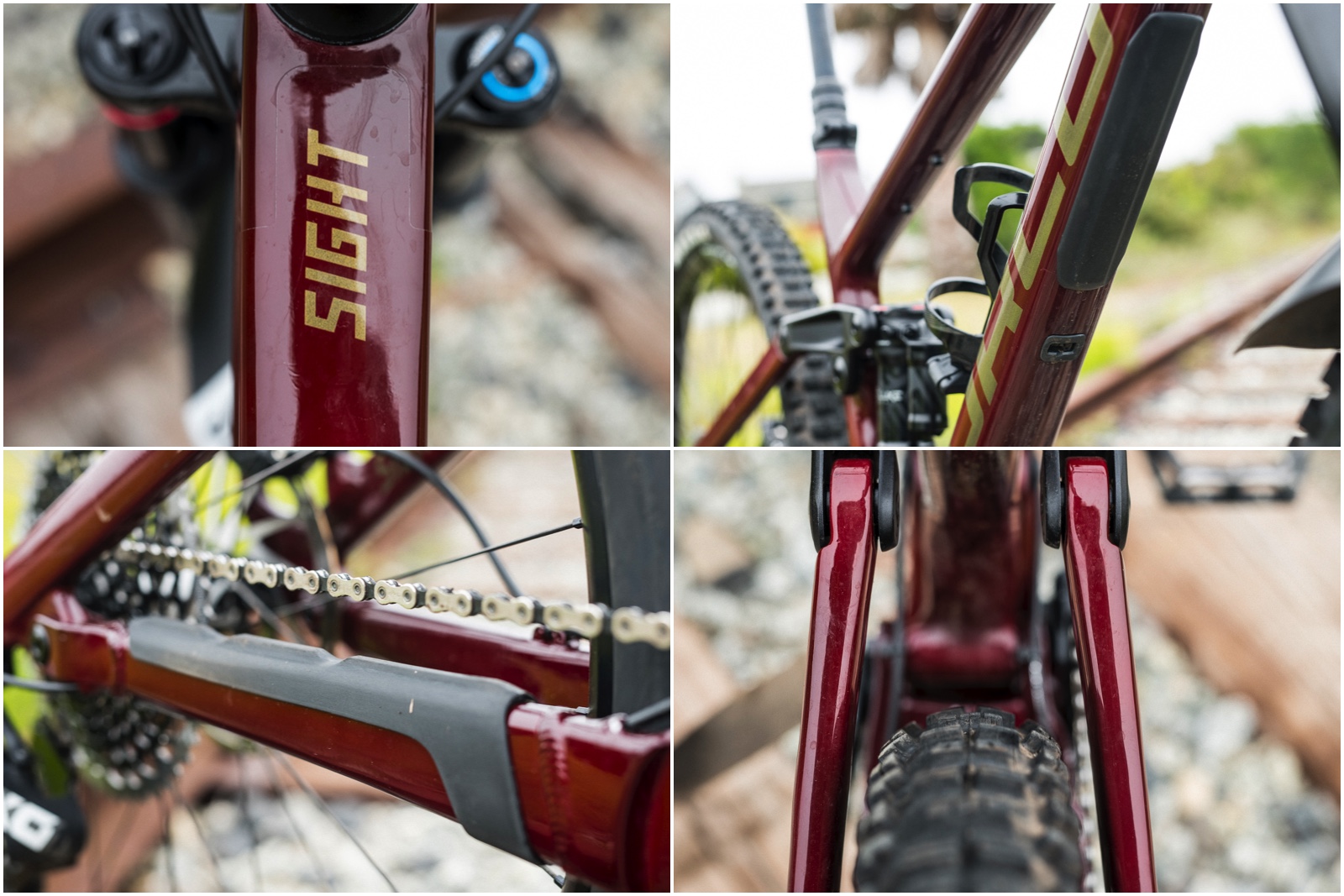 Clockwise from top left: although it may be a little difficult to see, a clear vinyl wrap is strategically placed throughout to protect the paint’s lovely finish. On the downtube, a port to secure the cables via zip tie is flanked by both a shuttle guard above and rubber fitting to protect from rock strikes below. Ample tire clearance for up to a 2.6″ tire, no problem. Finally – a molded rubber chainstay protector with the derailleur cable running through the chainstay, out of harm’s way.

First and foremost, I want to commend Norco for being one of the only brands that scales their geometry according to size. While most brands bikes just get longer or shorter in the front end depending on sizes, Norco does the same thing with their back ends. Looking at the rear center figures below, you can see that the chainstays go from 430mm for S to 435mm for M, to 440mm for L to 445mm for XL. Doing this prevents disrupting the balance between the front end and back end, providing a consistent feel throughout the size range. As a rider, this helps you feel “in it” on the bike, regardless of your size. Looking at this through an economic lens, one will quickly realize that it brings about substantially increased tooling costs. In my opinion it’s worth it and I wish more brands would follow their lead.

Since that’s out of the way, now we can have a quick look around at the geometry figures. If you’re familiar with what works and where things are headed, it doesn’t take long to realize that the numbers on the Sight are dead on. With my size Large boasting a 77.7º effective seat tube angle, it had me sitting very upright, for a highly efficient climbing position. Speaking of seat angles, Norco even goes so far in keeping a balanced fit through their size range that they steepen that number as the sizes increase. On the other end of the spectrum, a 64º head angle – a number once common on downhill bikes, has the bike braced for the steepest of terrain. A 485mm reach and 440mm chainstays keep the bike nicely balanced and stable without being so long as to impinge on the liveliness. All in all, the numbers are exactly what I’m looking for.

Norco has a very well designed setup guide on their website called Ride Aligned. It breaks down suggested settings for each the individual model – in our case the Sight C1.  There is even a slider which allows you to toggle your skill level up and down. Doing so affects the suggested suspension and tire settings accordingly and from my experience, accurately, as I found myself quite happy almost exactly where they recommended.

To start, for the bulk of this section of the review, I’ll be focusing on the attributes of the frame itself. As mentioned prior, Norco offers this bike (and others) in carbon or aluminum, 27.5″ or 29″ and with plenty of options for builds. Touching quickly on specs for this bike though, it does consist of a trusty mix of parts, although at just south of $6,700 the value is not bad, not amazing, but – pretty good. SRAM’s Eagle X01 drivetrain was incredible per usual with snappy shifting and huge range. The Code RSC brakes provided excellent stopping power with a consistent feel. The latest Reverb is superior to its predecessors, and having a full 175mm of travel was nice for a long legged rider like myself. The remaining cockpit parts were ho-hum, minus the Deity bar, which was nice, albeit quite stiff. While the DT-Swiss wheels are “name brand” and less generic than some choices, I did find that they felt pretty average on trail. Personally, I’d take an Eagle GX drivetrain and carbon wheels at the same price if that was possible. Anyhow – onto the frame itself… 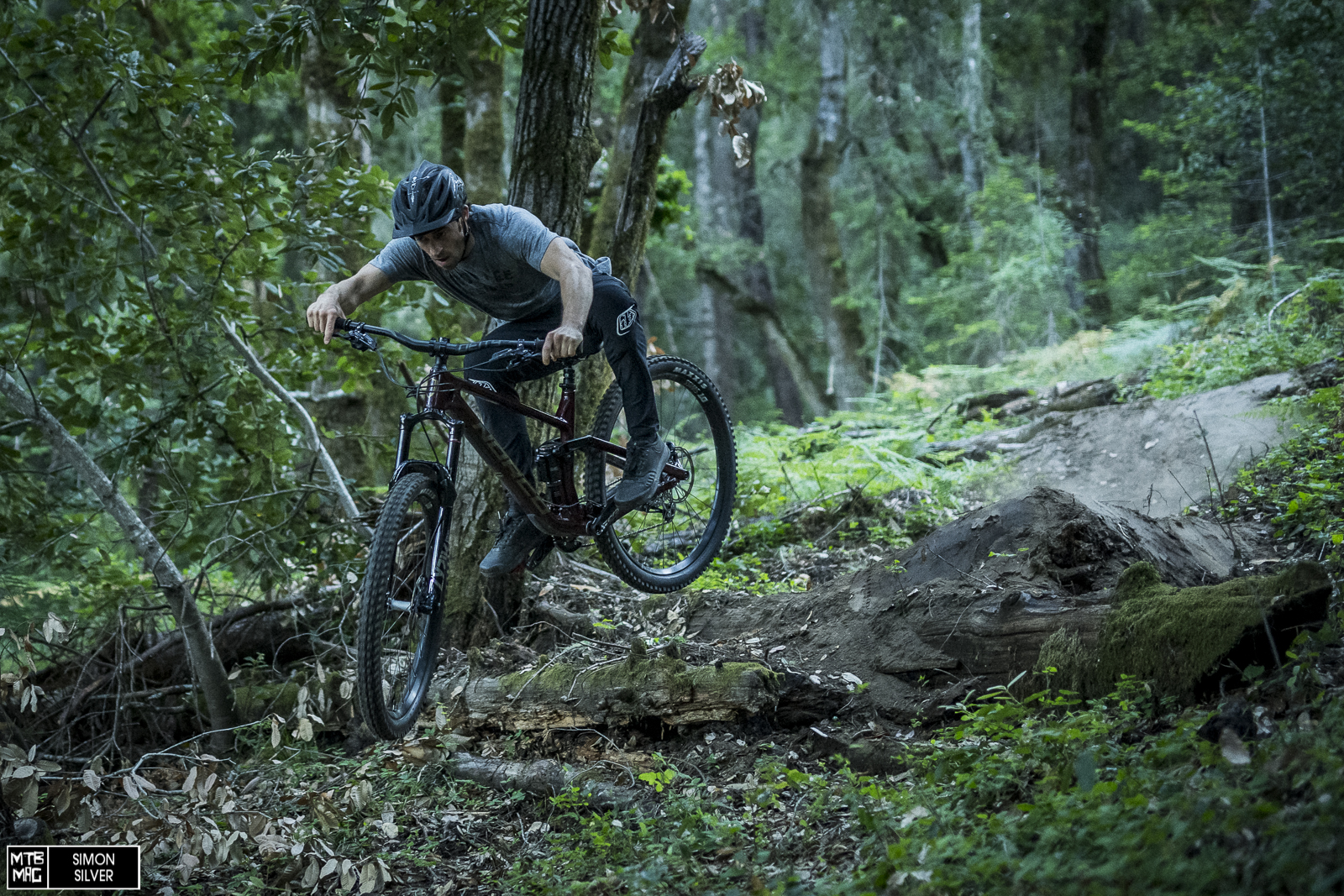 Starting with the climbing, the Sight gave me very little to complain about, albeit being just a hair portly. From a body position standpoint, the super steep seat angle made it easy to effortlessly spin without wasting energy fighting to get up over the front. I can’t overstate it enough, the geometry is spot on. As far as pedaling efficiency is concerned, no major issues there either – on long grinds I used the lockout, but for most intents and purposes, never felt the need. On the ascents, the Sight is a bike you can rally all day for sure. 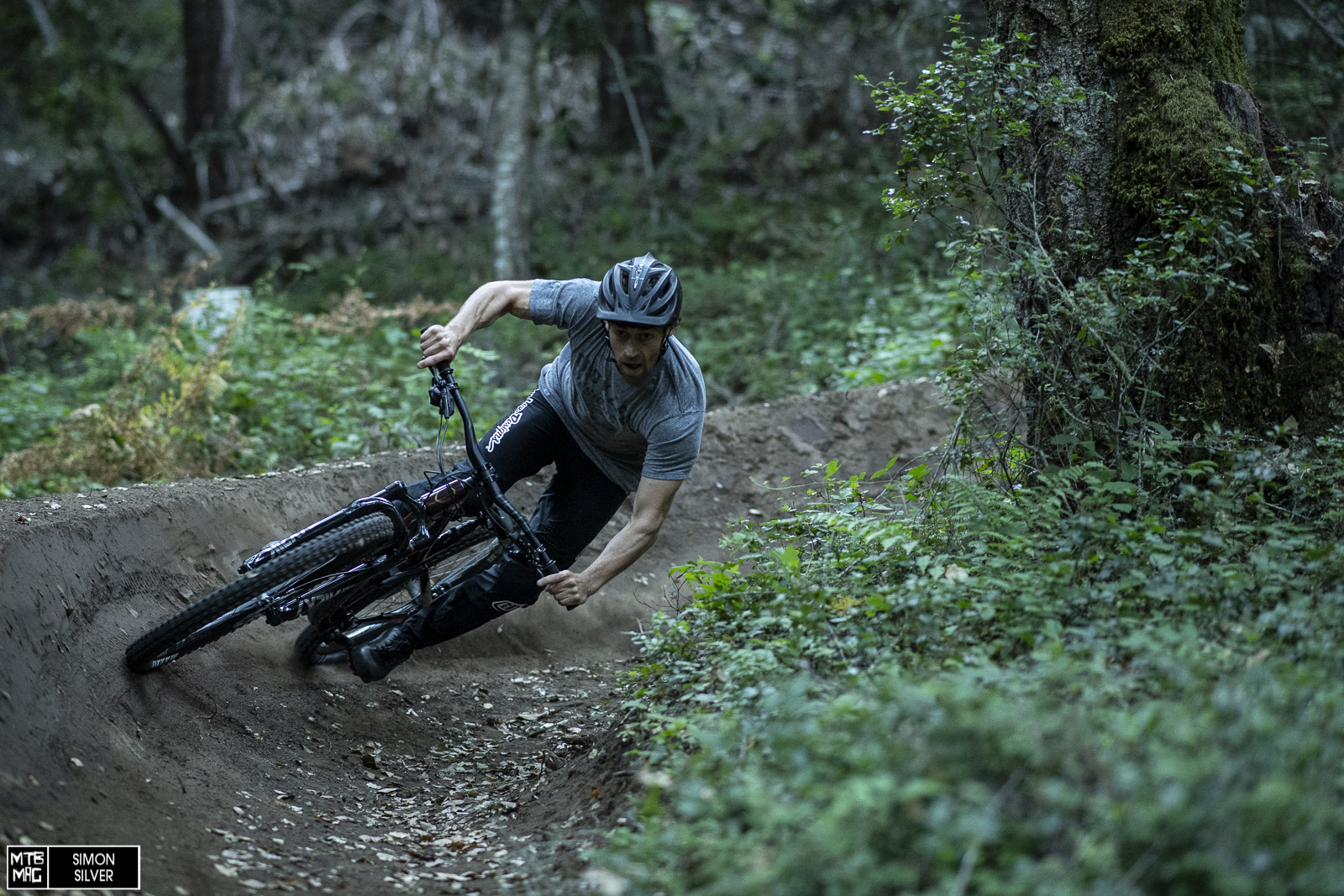 On mellower, mid-grade terrain where you’re using the bike to try and generate speed, the Sight was capable, nimble enough and sure footed, although it wasn’t what I’d consider to be super lively or poppy by any means. As mentioned prior, perhaps some carbon wheels might liven it up a touch, but overall it was a great handling bike. Personally, I think Norco aced it with the geometry, so perhaps the materials and layup leaned more toward taking the edge off, as opposed to lighting a fire underneath you. As far as cornering goes, whether fast or slow, the suspension responded nicely by sitting up in the travel and the frame didn’t give or flex much under load. All in all, it checked the boxes under both cornering and braking nicely.

One thing I should touch on are the smart features on the frame – it has excellent protective features from rubber fitment to clear vinyl wrapping in high abrasion areas. The cable and hose routing is brilliantly laid out, although on trail it was a touch on the noisy side – a quick job with some foam pipe insulator could fix that right up though. 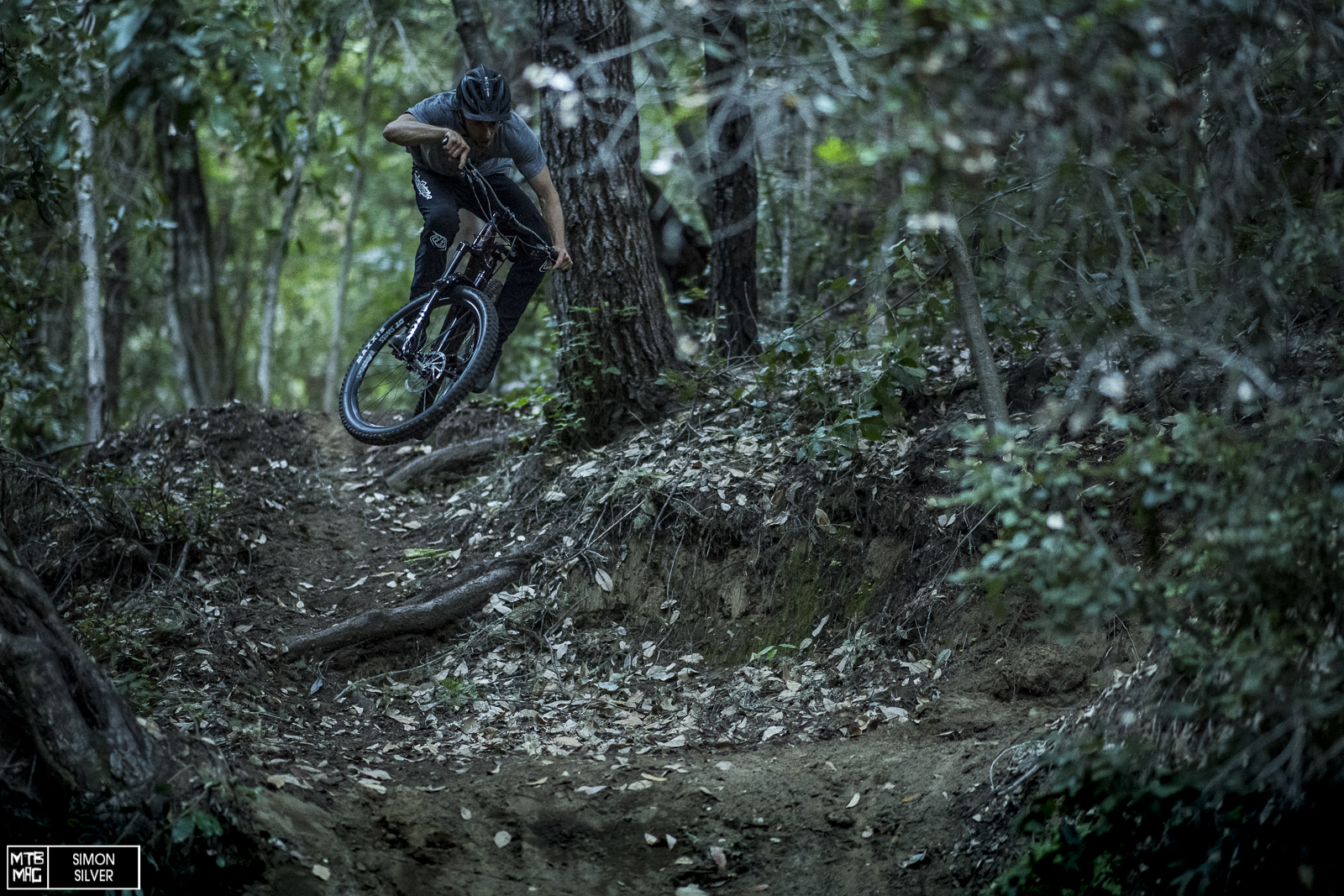 One thing that didn’t quite hit the mark was the rear suspension. At roughly 2.85:1, the leverage ratio is pretty high. For what it’s worth, 2.5:1 is a nice, ideal ratio. Anyhow, this made it a bit difficult to tune for that “just right” sweet spot in the rear suspension and the shock tended to get a bit overwhelmed during successive mid size hits. While Norco recommends 2 volume reducers, I was bottoming pretty easily on big hits even when I was running less sag than I typically would. When I bumped up to 3 volume reducers, the mid stroke harshness got worse, thus resulting in a greater loss of traction when things got hectic. I eventually settled in the middle on a RockShox 2.5 gnar dog token, where I found a happy medium between compliance and bottom out support. This all makes me think that perhaps this bike would be an excellent candidate for a MegNeg, and I couldn’t help but notice that Norco athletes are running them. With all of that said, most riders will be quite content with the suspension on offer here, but hard chargers might find that it holds them back some, or at the very least is a bit difficult to set up.

All in all, the Sight C1 has been a great ride and would likely leave most riders quite happy. With some of the consumer direct brands offering better value and shop brands like Trek or Specialized generally offering a bit less bang for the buck, it lands right in the middle in that department. 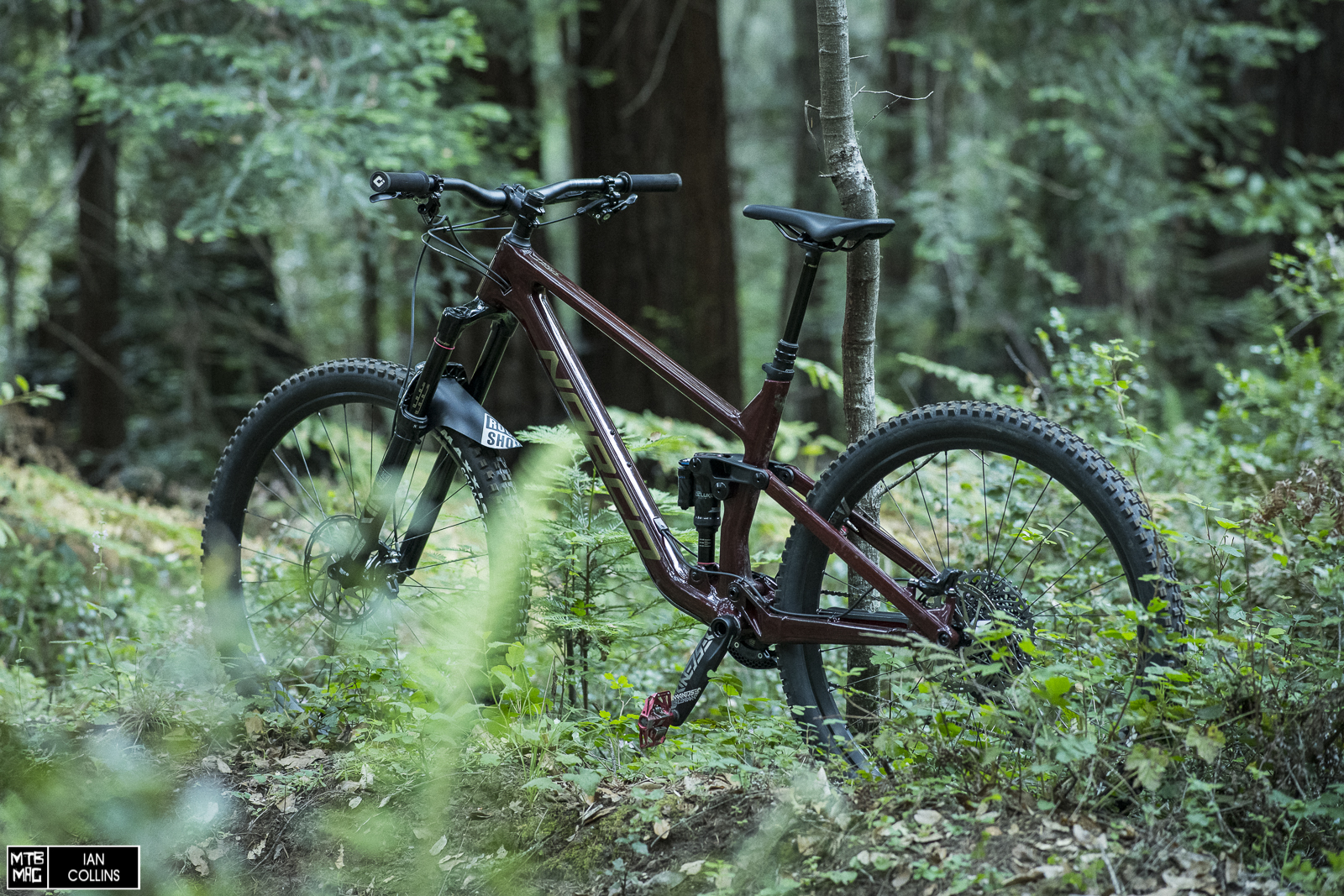 Again, I absolutely loved the geometry, which is about as good as it gets. Though the Sight lost some points for its finicky rear suspension – although I think it could likely be worked around. At the end of the day, there is a pretty short list of competent long legged 29″ All Mountain bikes – and as it is on that list, the Sight is certainly worth a look. 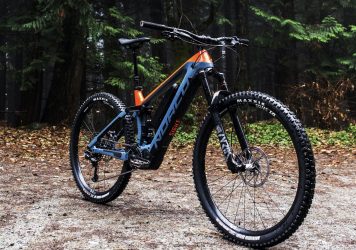 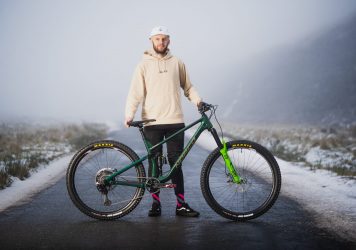 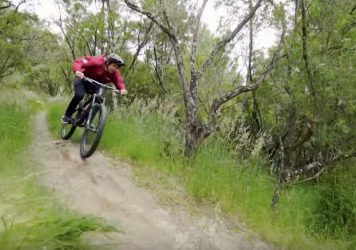