For the better part of a year now, I’ve been riding OneUp’s ultra thin Aluminum pedals on everything from my trail bike to my e-bike to my DH bike. By utilizing a large diameter inboard bearing and a thin brass bushing outboard, OneUp was able to utilize a thin axle which helped get the thickness of the pedals down to roughly 8 – 12mm, depending on which part of the pedal you’re measuring – not including pins. This puts them at roughly 10mm thinner than the average high end flat pedal. Further down we’ll discuss how the low profile of the OneUp pedals is advantageous in a great many ways, amongst other things as we dive into the review… 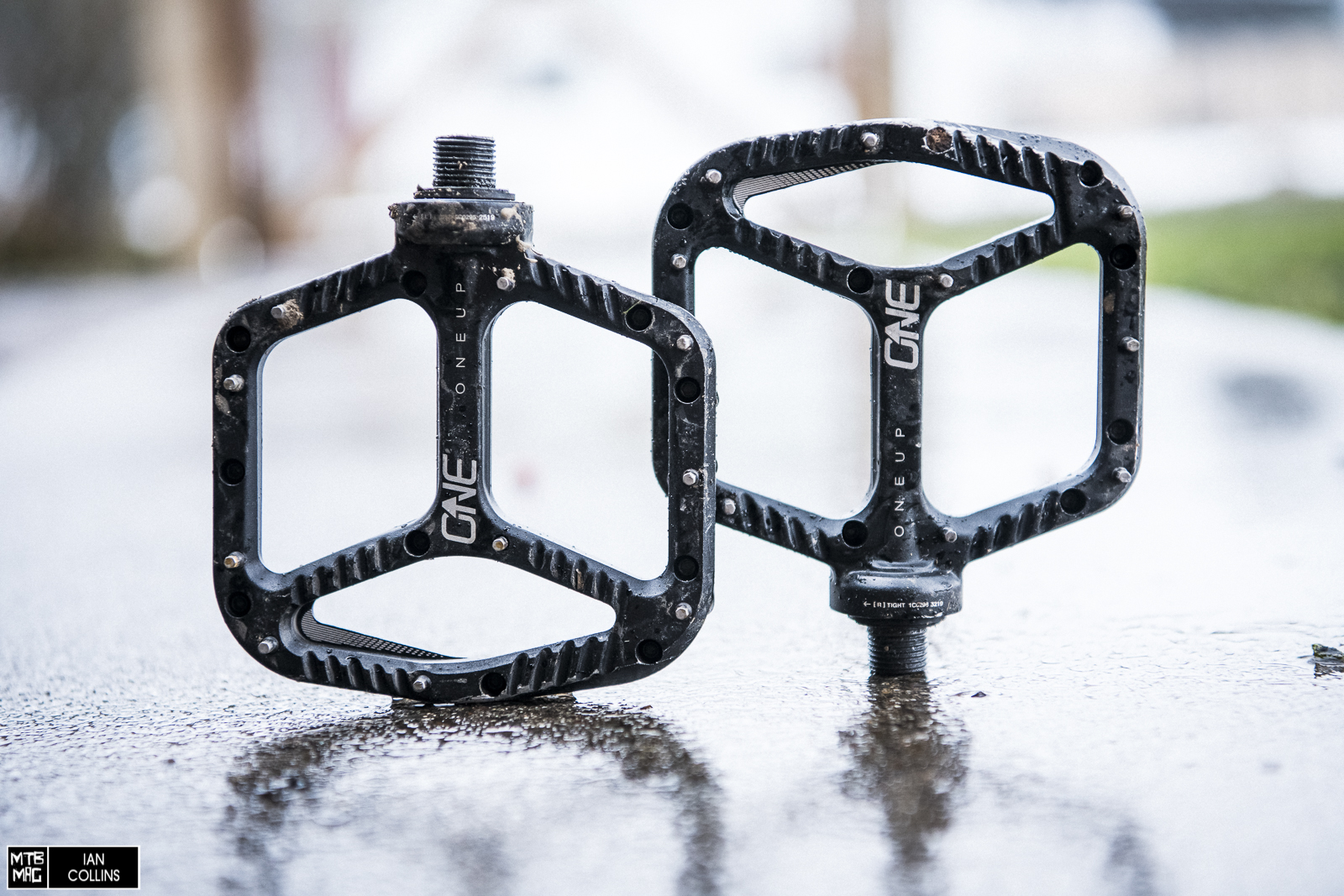 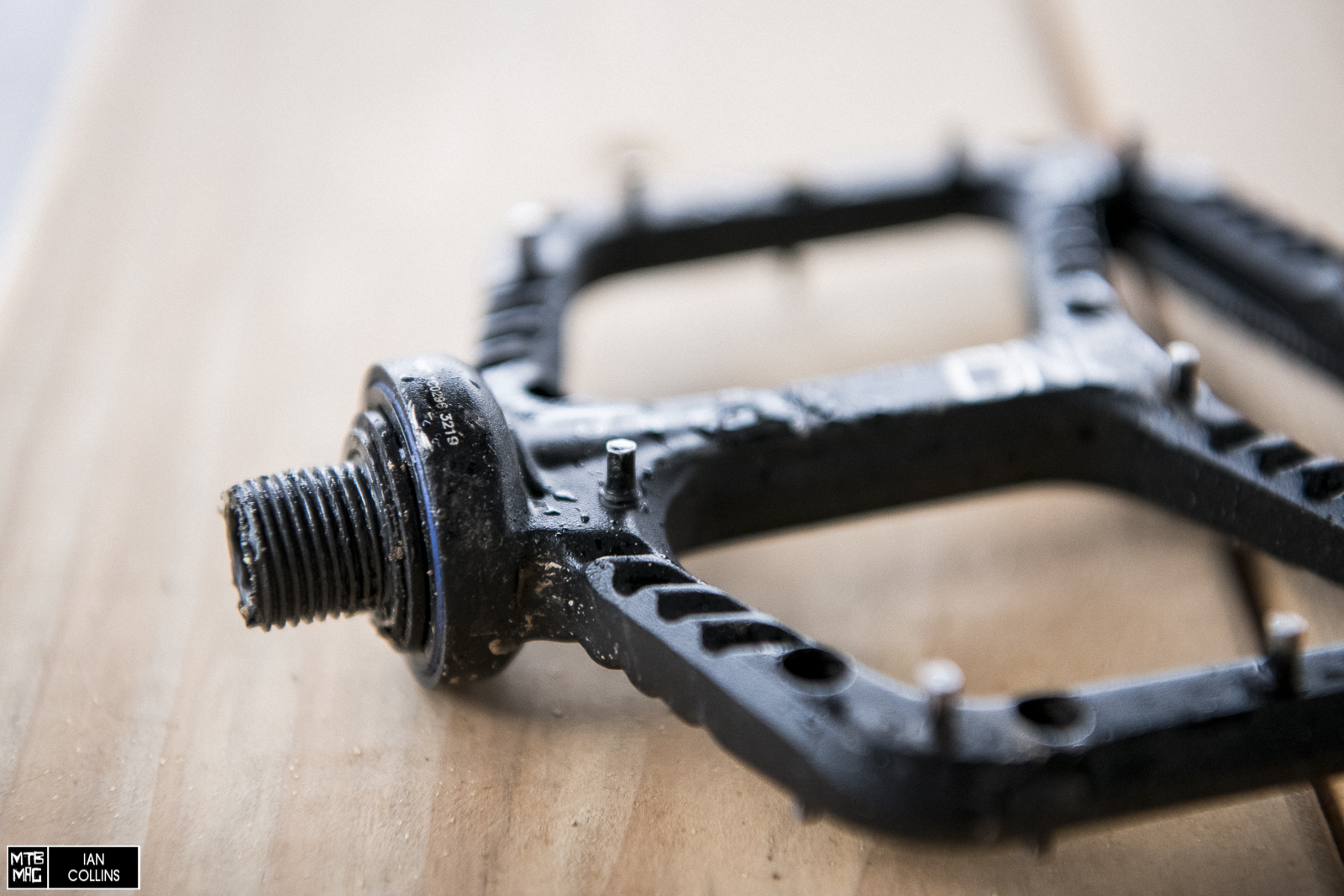 Beginning with the flange that houses the bearing, OneUp aren’t the only ones taking this approach, but from a design standpoint they have done a better job than most at keeping the flange low in profile. One small downside is that you’ll either need to remove your crankboots or modify them slightly to clear the pedals. The OneUp pins are tall, sturdy, customizable and replaceable. There are ten per side, but you could remove some if you prefer a slightly less grabby feel. 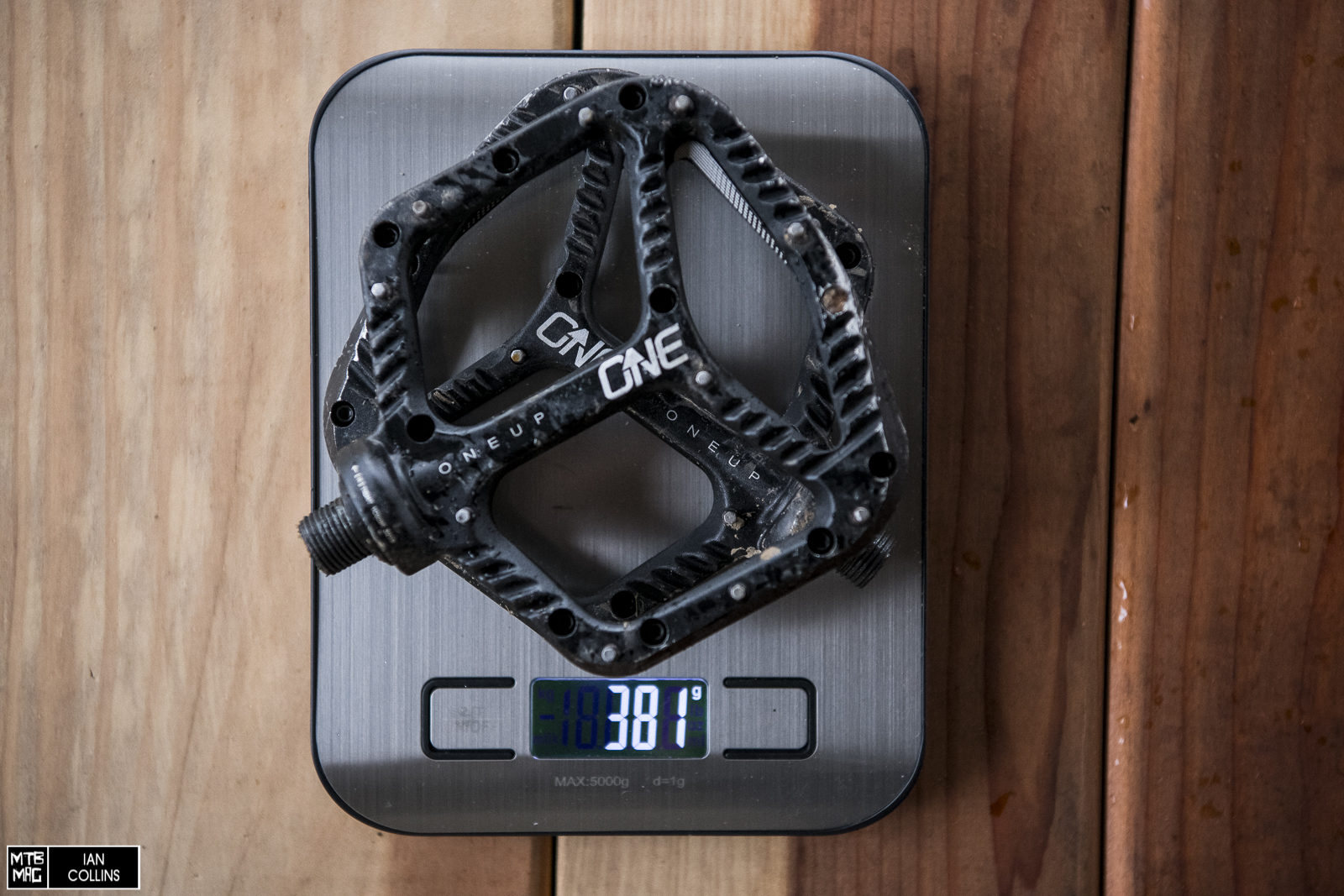 Our pedals came in at 381 grams with a fair bit of dirt and grime on them, so it’s safe to say that the 365 gram claimed weight isn’t far off. All in all, for a high end pedal that’s a good weight…you’d have to spend quite a bit more money to save a nominal amount of weight. 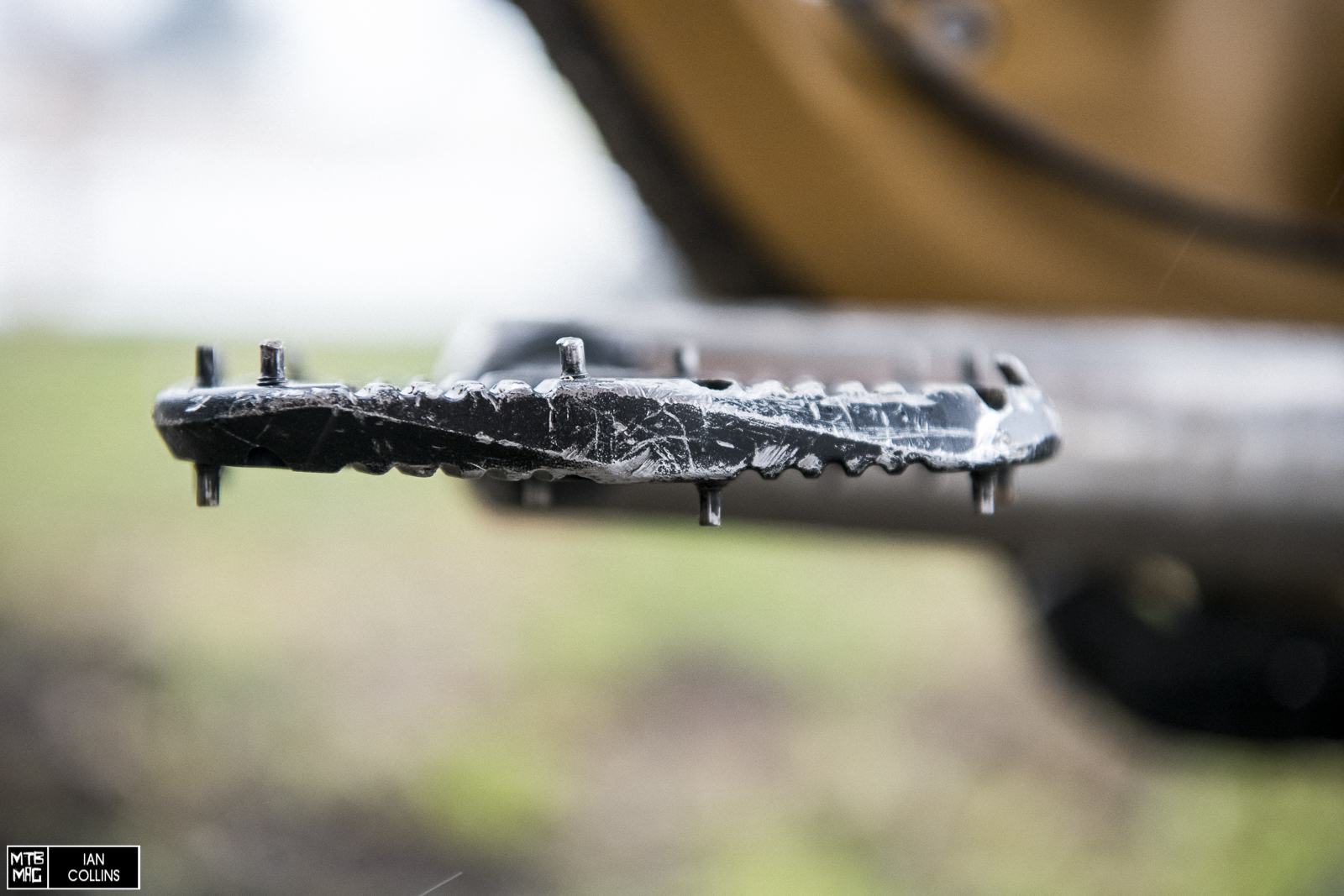 The pedal platform shape is ever so slightly convex but with such tall pins and such a minor difference between the thickness at the axle and at the outer edge, that they feel flat. 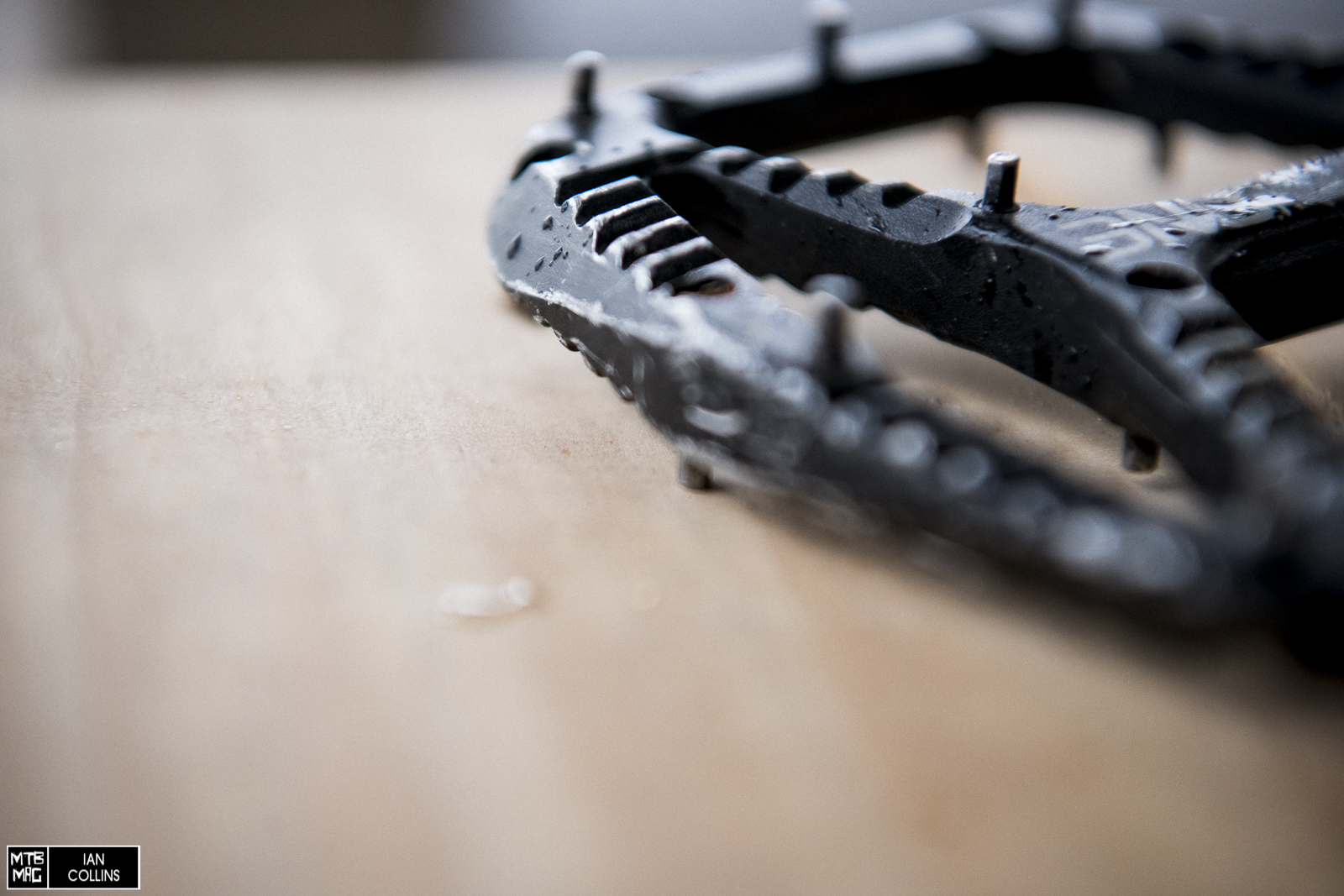 The OneUp pedals are designed in a way that the outboard leading edge is chamfered, so as to prevent the hangups on obstacles found on trail such as rocks and roots. In the photo above you can also see the grooves cut into the pedal body, which help to add even more traction – as if the pins weren’t quite enough.

Starting with feel, I anticipated that the bulge which houses the bearings might be a distraction as that was the case with pedals I’ve used it the past which utilize a similar design. This proved to be a non-issue as I never really noticed it due to the low profile combined with the platform shape and pin placement, which seemed to encourage my feet to away from it.

So, the standout feature with these pedals is how thin they are. Sure there are others such as Gamut, which took the original Point One Podium design and ran with it. But at the moment the OneUps are the leading ultra thin pedals. It’s worth dissecting some of the benefits of a super low profile pedal, which might not be slap-in-the-face obvious upon first glance. For starters, they lengthen your effective crank length. Second, they lower your effective bottom bracket height. And third, they give you more ground clearance, which makes it seem like your cranks are shorter, so it’s a win on both ends. I’ve intentionally run these pedals on bikes where I’m looking for one of or any combination of these factors. With an average thickness of 10mm, compared to your standard high end flat pedal, which run to the tune of 20mm, you end up with an advantage on both ends. Think of it this way – if you’re coming off of a 20mm thick pedal, these will make a 165mm crankset feel like it’s 170mm long while giving them the ground clearance of a 160mm crankset. If you’re coming off of a pair of clipless pedals, the difference will be even more dramatic. So much so that you’ll likely lower your saddle and handlebar height like I did. As far as trail feel goes, I enjoyed loads of traction from the super grabby pins and the support was evenly distributed across the real estate of the nicely shaped platform. When the pedals were brand new and combined with new shoes, they were almost too grabby, but after modest wear and tear from a few rides they felt just right. The platform size was absolutely spot on for me with a 10.5 US shoe size. I couldn’t see myself wanting anything larger or smaller. On trail, the clearance was definitely a bonus although it might be hard to tell by seeing some of the battle wounds on the pedals – keep in mind these have seen over a year of use, much of which was on a bike with a super low bottom bracket. Regardless, I haven’t needed to change the pins as the most badly damaged one (out of 40 total) pictured above is still hanging tough. As far as the bearings are concerned, they aren’t exactly spinning as smoothly as they did on day one, but after dozens of hosings and plenty of days in less than ideal conditions that should come as no surprise. I got a year out of them, but I’m due for a rebuild kit – fortunately it’s reasonably priced and easy to install.

For many years now I’ve been a big fan of the DMR Vault pedals, and while I won’t say that the OneUp Aluminum pedals totally dethrone them in my mind regarding feel, they’re pretty damn close. The traction is amazing and the pins hold up admirably – if anything, better than the Vaults. The platform shape is perfectly supportive and the size and silhouette are a dream. In my mind, it comes down to this – if you’re looking for a high end, tough as nails flat pedal with an incredible trail feel these check the boxes. However, if you place high priority on increased ground clearance and/or a longer effective crank length, well then look no further as accomplishing those things is precisely what separates these pedals from the rest of the field. As far as value is concerned, $129 is right on the money – they’re not an absolute steal, but they’re by no means overpriced. A worthy product for sure.