As we live in the namesake town of Santa Cruz, California, our tester’s first real mountain bike was in fact a Santa Cruz Superlight from around 2001. Fast forward 18 years, and it was time to hop on a more modern model from the legendary high performance bicycle brand. Our test bike, is a vastly different bicycle from our first Superlight dating ages back, and it’s dubbed the Megatower – a 160mm, 29″ enduro weapon. Let’s dive into the details on how it performed out on the trails. 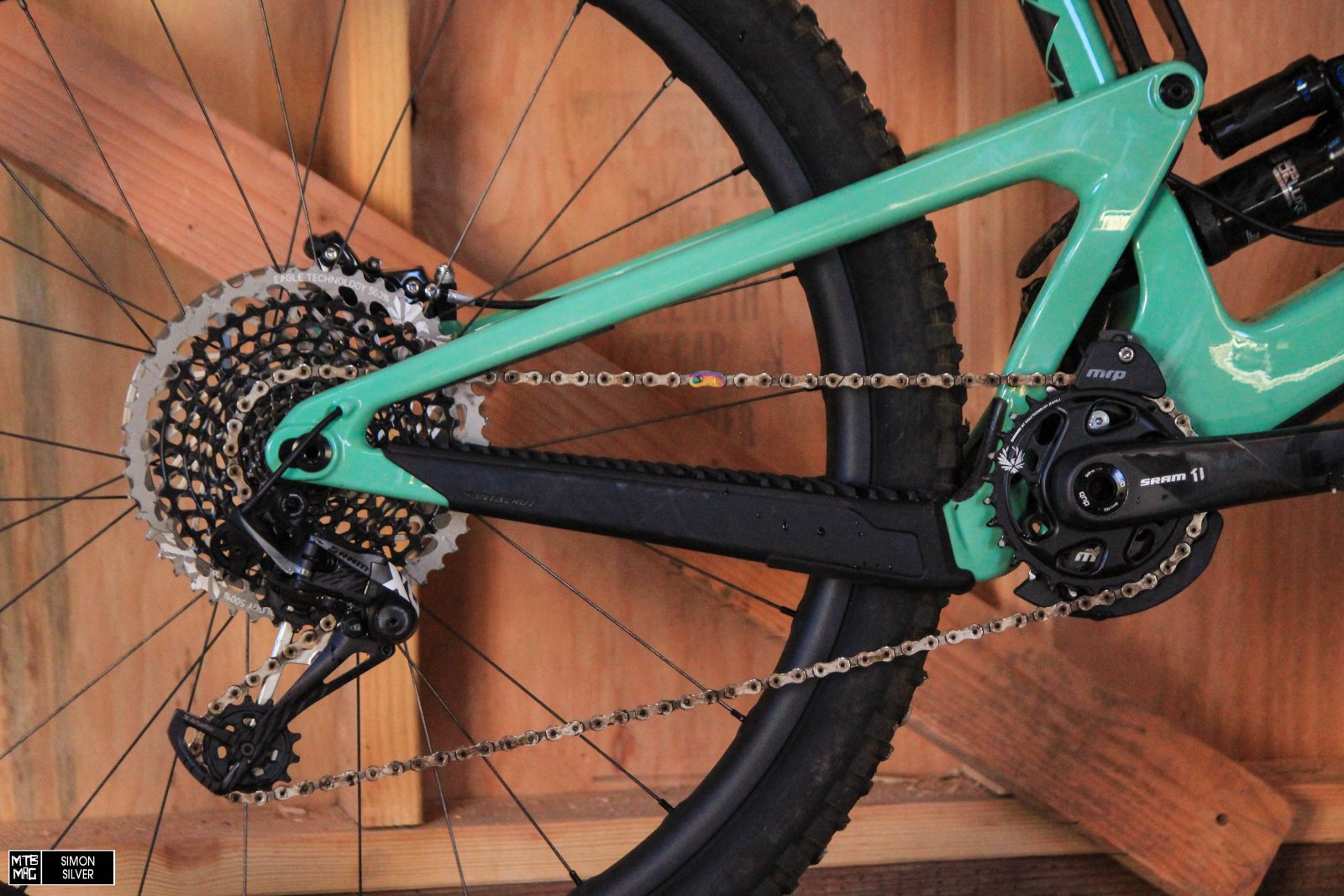 SRAM X1 Eagle 148 DUB cranks, linked up with an X01 Eagle drivetrain, make for a crisp shifting, and precise drivetrain. The ribbed chain stay guard works extremely well, and is a quality feature that trickled down from the Syndicate World Cup team. 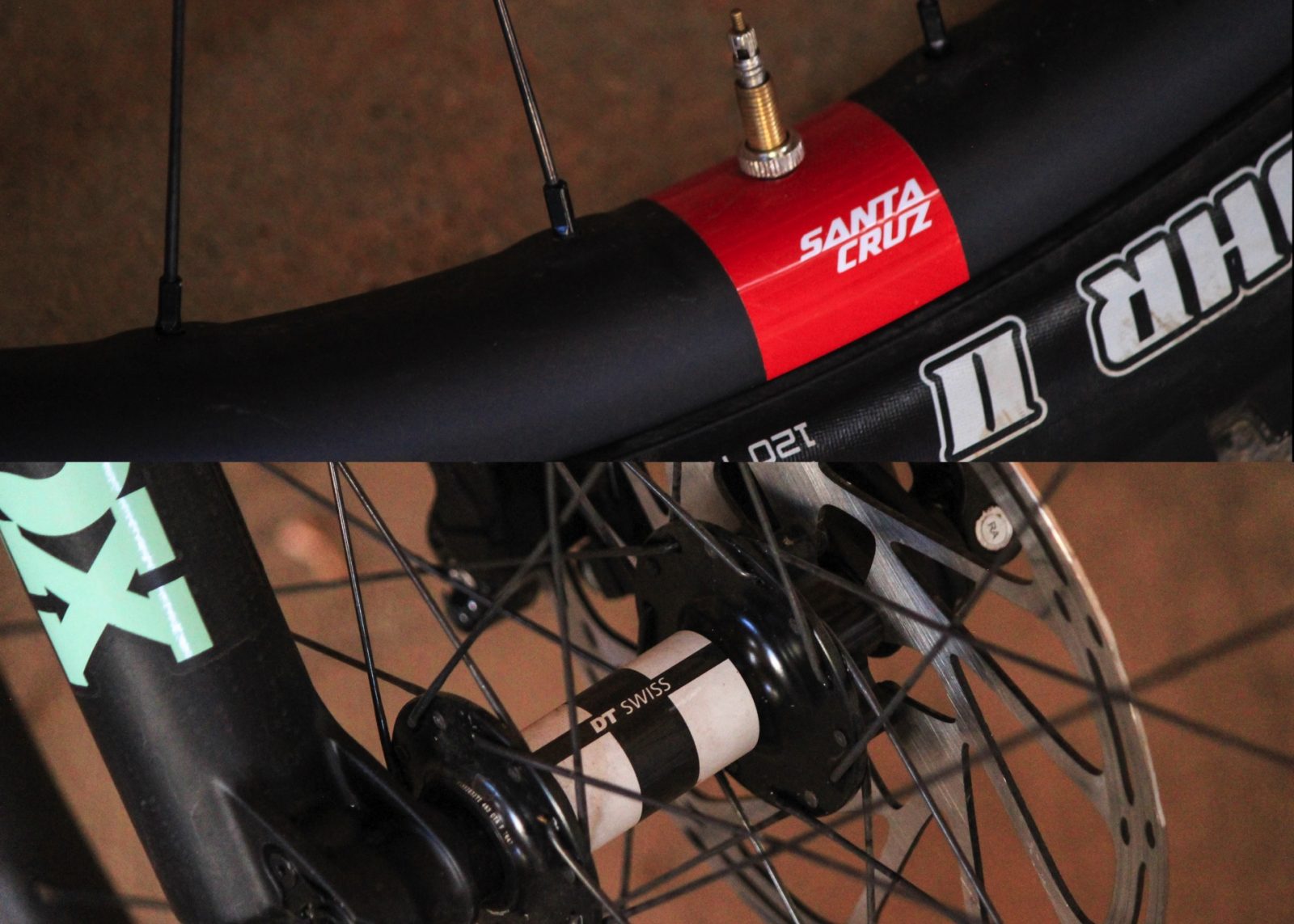 The X01 CC build comes with two wheel options, Race Face ARC rims, or the upper tier being in house Santa Cruz Reserve carbon rims laced to DT Swiss 350 hubs. The wheels were impressively responsive in most terrain, yet stiff and strong, making for no issues at all during our test. A full review on these (sans DT Swiss hubs) can be found here. 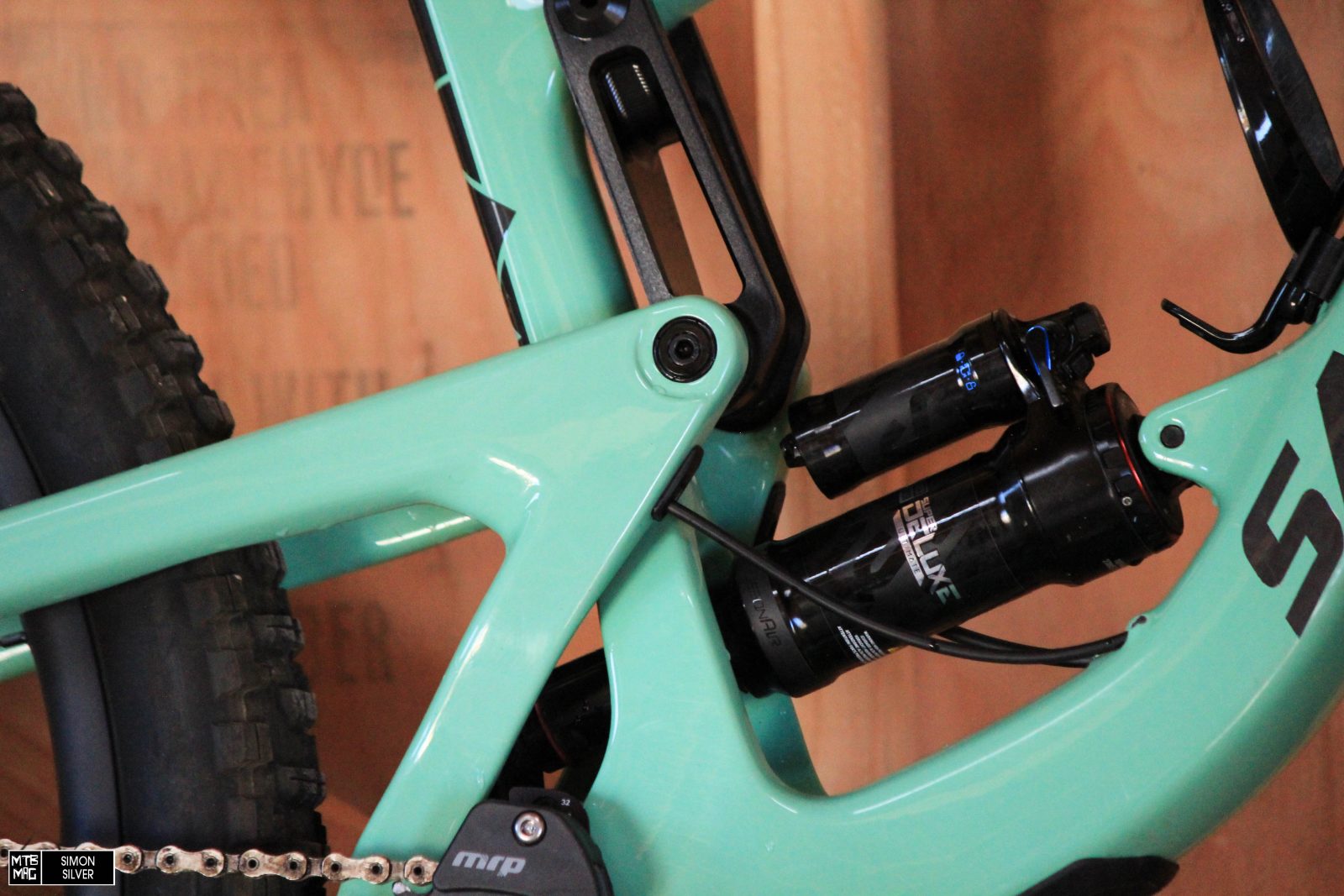 The RockShox Super Deluxe Ultimate features a lock out lever (that we rarely used). It also features a low speed compression adjustment. The shock proved to be a smooth option for carrying the VPP’s suspension dynamics, though we felt setup was hard to fully dial in exactly where we wanted it. The 160mm Fox 36 Float Performance Elite has high and low speed rebound and compression, fitted with the latest Grip damper, the fork proved to be easily tunable and smooth throughout our time on the bike. Custom color matched decals are a nice touch as well. 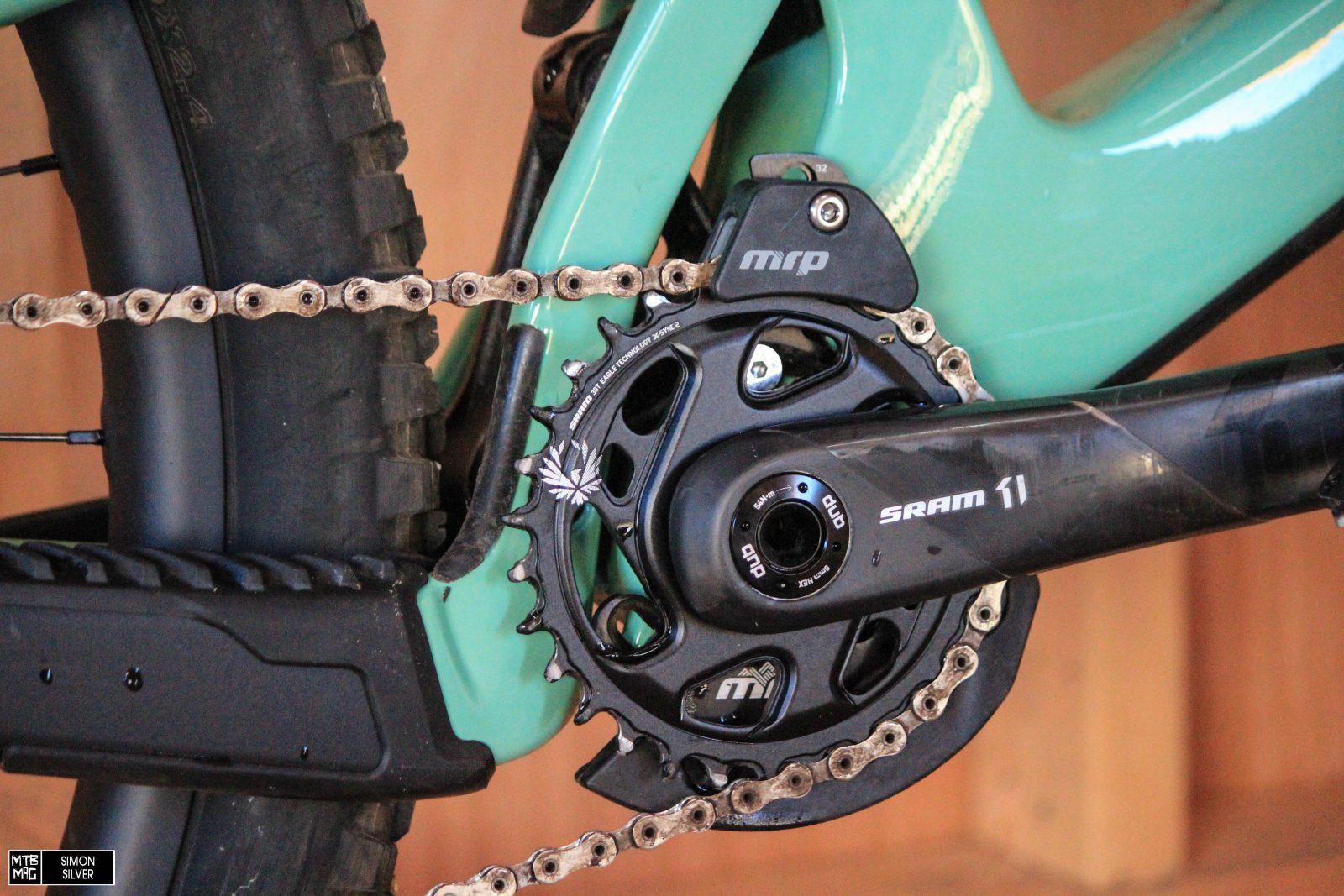 Are chainguides still relevant? Sure Eagle chainrings will likely keep things in place, but we are a huge fan of having added rock protection, and peace of mind that our chain isn’t going anywhere. Santa Cruz opted for the MRP AMg V2 Alloy chainguide, which was worry free during our time on the bike. The added rubberized protection just behind the chainring is a nifty feature you can expect from Santa Cruz. 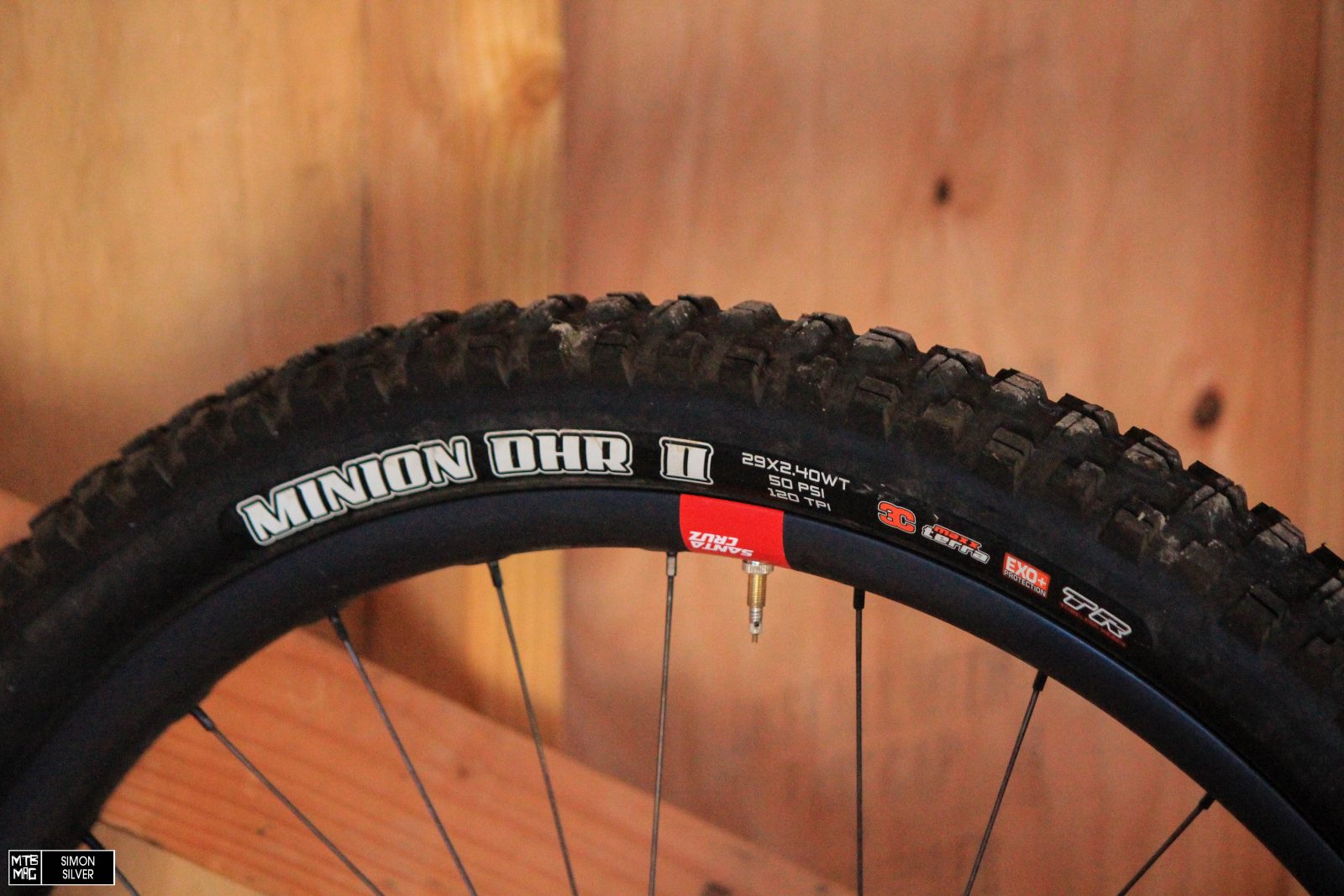 The Maxxis Minion DHF / DHR combo has become such a staple for a plethora of bikes, from downhill to trail. The combo provides the reliable traction and performance Maxxis is known for. Other than perhaps Schwalbe Magic Mary’s, we likely wouldn’t swap the stock tires many other options. 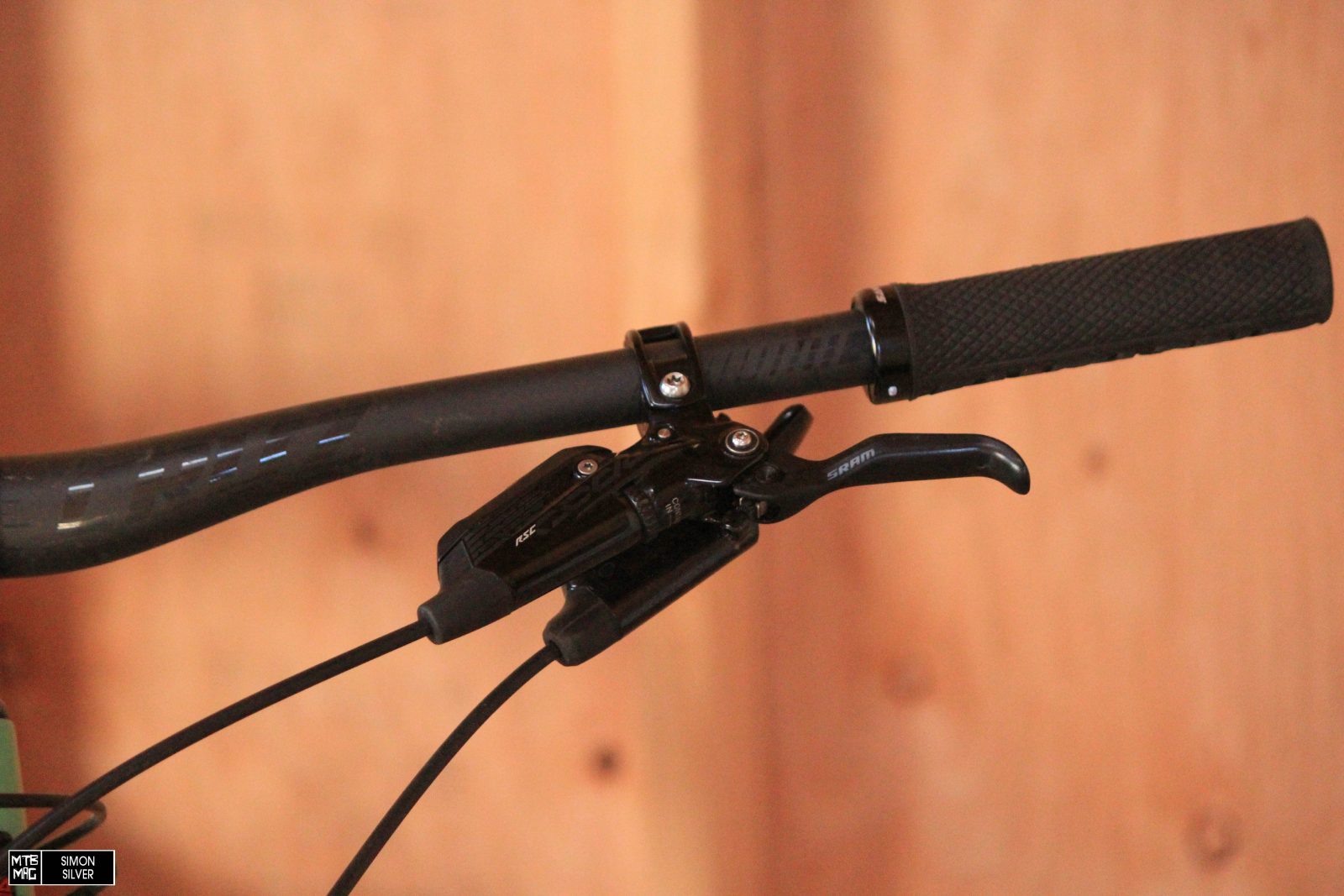 SRAM Code RSC brakes (mounted to the house brand carbon bars) provide the stopping power for the Megatower. We are quite fond of these brakes, as they have a consistent braking feel, plenty of power, and reliable modulation. It’s our opinion that any longer travel SRAM equipped trail bike should spec nothing less than Codes. The renowned RockShox Reverb Stealth (150mm on our size Med.) was consistent and reliable throughout our test, and we really like the newest iteration of the lever, due to its ergonomics and lighter action. 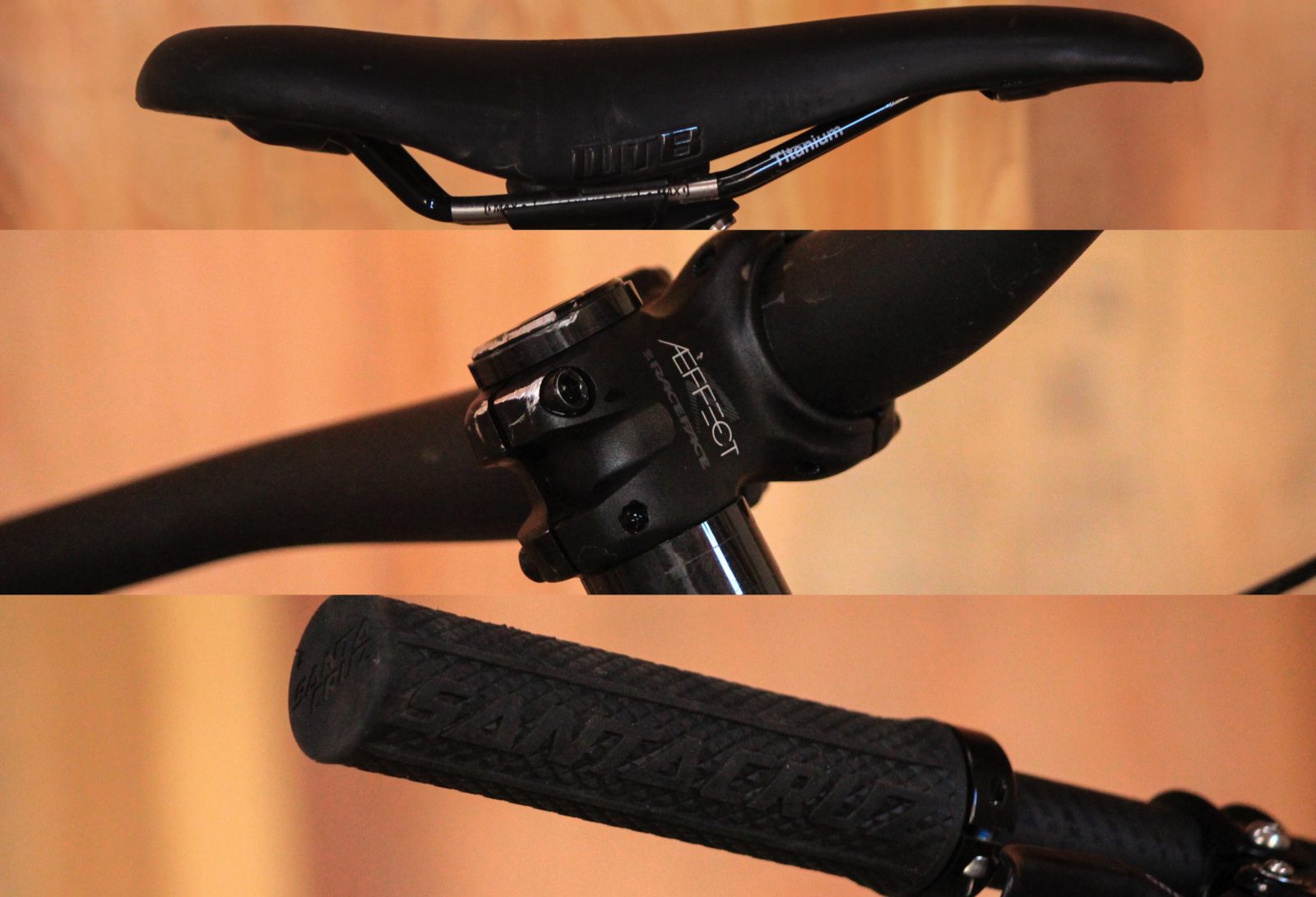 The WTB Silverado Team Saddle was lightweight due to the Titanium rails, and provided the support we look for in a seat. Often body shape has a lot to do with saddle preference, in our circumstance, the Silverado and our rear end got along just fine. A Race Face Aeffect R 40mm stem keeps things short and stiff up front. The Santa Cruz ‘Palmdale’ grips were quite satisfactory in comparison with what typically comes stock on most bikes, though we eventually swapped to Sensus ‘Meaty Paws’. Progressive geometry can be found on the Megatower, meaning a low center of gravity, a slack head angle and a fairly long top tube. The 450mm reach on our Medium felt roomy, but kept the cockpit well within reach. The 65°-64.7° head tube angles both make for a comfortable ride feel in the steeps, though switching to the high position (65°) makes a noticeable difference while climbing. The 44mm offset Fox Float 36 lends a helping hand to the top tube length, and provides added short offset agility.

Climbing on the Megatower was the first real thing we experienced on the bike (in the low setting) as we pedaled up for our first lap. We were instantaneously blown away by its climbing abilities. You truly don’t feel as if you are on a 160mm bike on the way up, as the lower link-driven VPP suspension (adopted from the V10) remains extremely stable under pedaling load, aka we rarely ever locked the rear shock out. The 76-degree seat tube angle also plays a part in the pedaling efficiency of the Megatower, as it helps to put the rider in an even more efficient position. A switch to the high stetting, combined with the Meagtower’s low weight, (especially rolling weight in the Reserve wheels) and this bike can really climb. Downhill is certainly what the Megatower was designed to excel at, and that it does. Short chain stays, at 435mm (long is 445mm) make for a fairly playful and quite agile feeling bike, perfect for the loamy and jumpy trails. The long position made for an impressively stable descender, greatly noticeable in steep sections that were particularly loose. In the mid-grade to flat sections of trail the Megatower lacked a touch of liveliness but it was made up for in higher speed scenarios. For a bike with a fairly progressive suspension design, we did notice some ‘hucks’ caused the bike to reach a bit deeper into the rear travel than we’d like, but it didn’t exactly bottom out harshly, or often.

It’s likely that the Megatower will be found by riders to seem smoother and more capable the harder it’s pushed. With nimble characteristics for such a large bike, the Megatower easily picks up over roots and rocks, but when ridden with less precision, those same obstacles can feel quite rough. These rougher, more chundery sections of trail made us want to try the bike with a coil shock for comparison, seeking a bit more traction and mid stroke compliance. A smoother ride feel, and more mid-stroke support may be possible with a different shock tune, but it likely comes down to kinematics. We’re really fond of bikes with low centers of gravity, often this design allows for a feeling of total control in corners, and really helps the rider place the bike while making a turn, be it stuffing the rear wheel into a small rut, or tracking through a corner that happens to offer little traction. The Megatower felt supportive in turns, and the low and centered feeling also translated to air time prowess. Particularly in the high setting, the Megatower felt lively off lips, and had a lot of pop to it. Stability is one thing, but having the help off of a lip to get you higher and further is a very welcome feeling, especially for riders learning to jump. The Megatower is a bike bred for steep trails and terrain, racing, or if you only care to own only one bike, but also desire to hit the bike park now and again. Impressive climbing, clean aesthetics, modern geometry, a sturdy design, and a wide price range/ build spec makes the Megatower rise toward the top of the list of race ready, chute seeking, burly trail bikes.