With Winter well under way, we’ll be spotlighting some cold weather apparel over the coming weeks. Recently Specialized sent us an assortment of their Trail Series garb for review, and first up is the Thermal Jersey, which I’ve been wearing on most of my rides ever since receiving it. While it can be worn on its own, I’ve found it most useful as a base layer for cold rides that likely warrant putting on a shell and keeping it on for most of the ride… 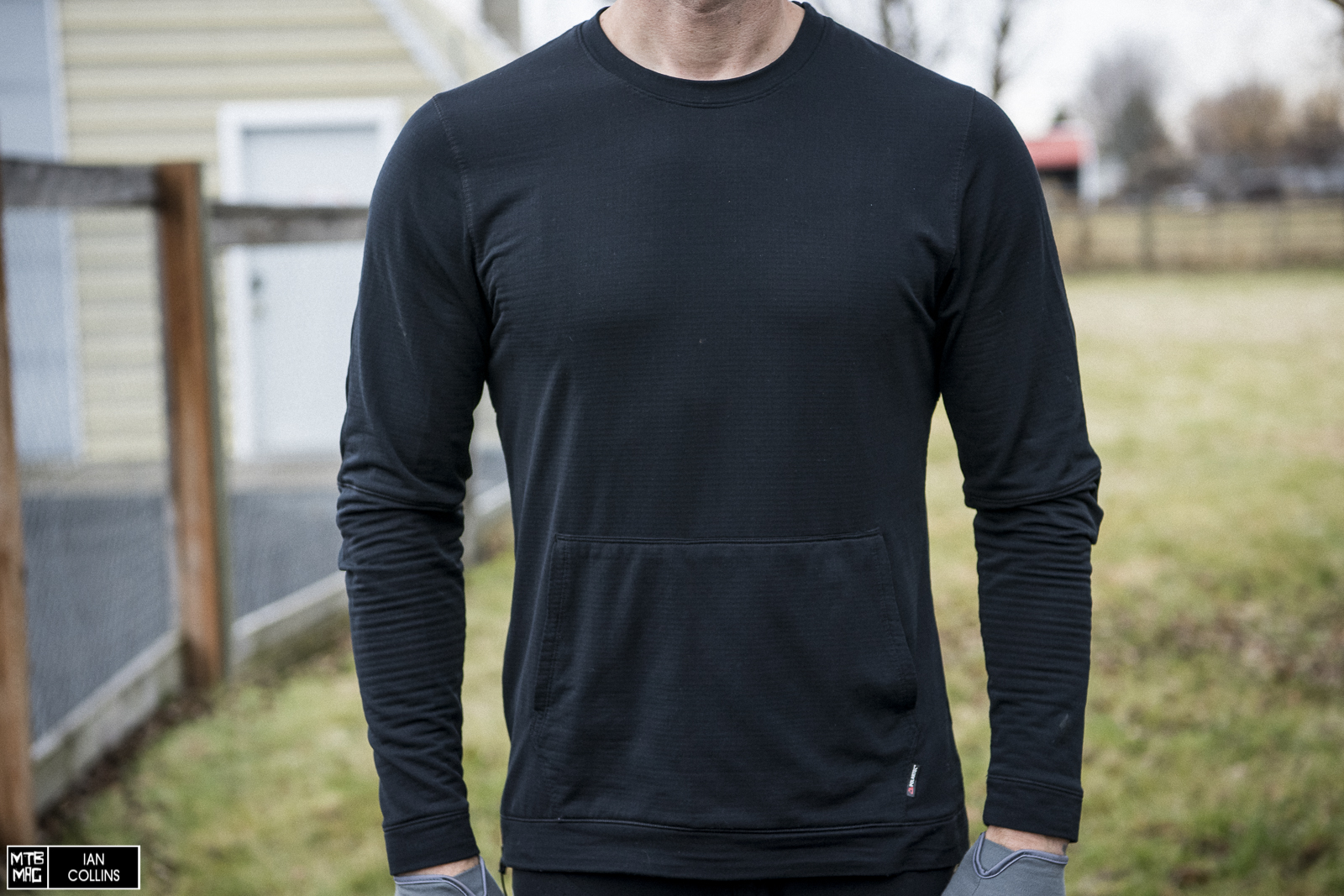 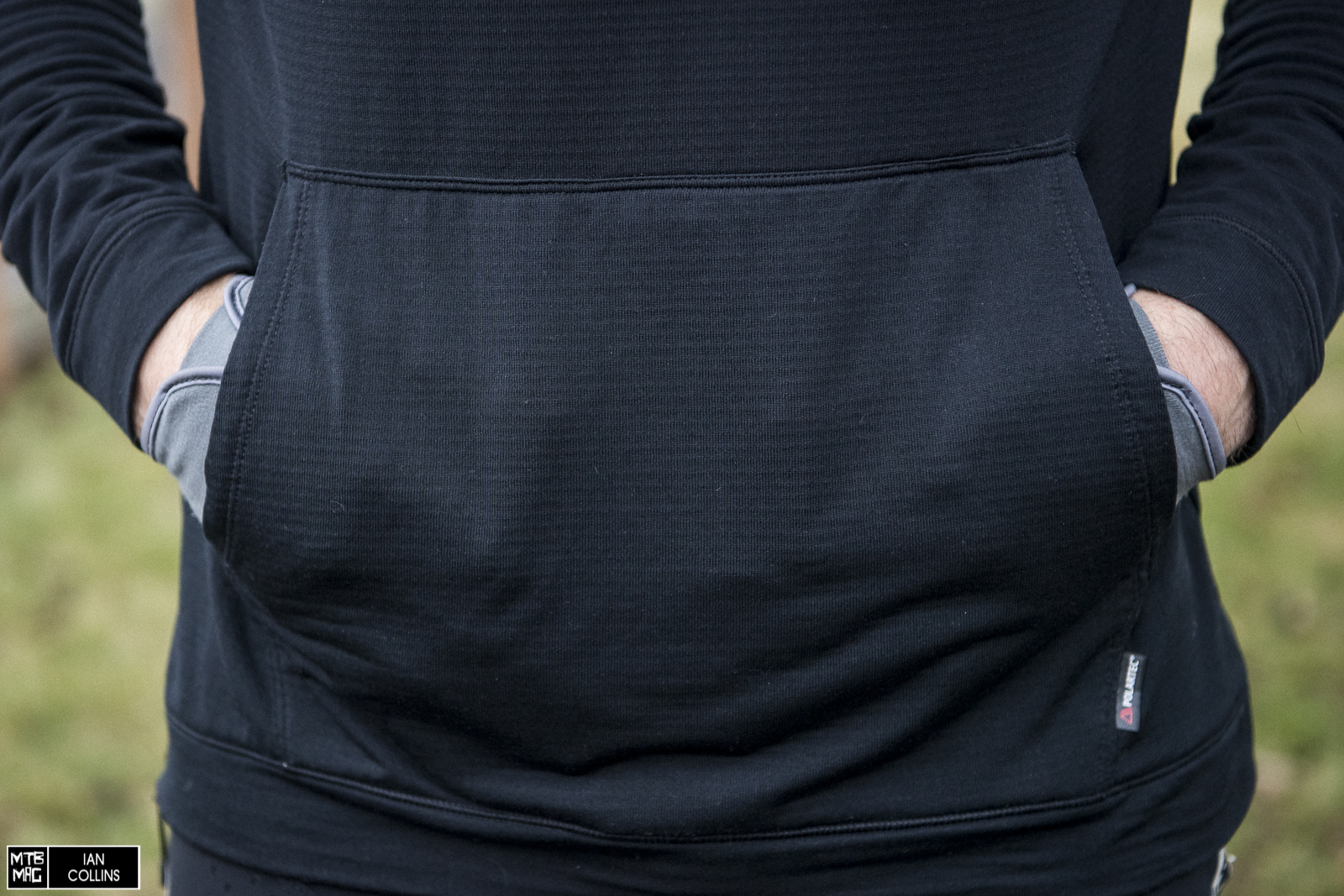 If there was one thing that stands out as being unique about this jersey, it’s the Kangaroo pouch. That said, it blends in pretty nicely and doesn’t really add any bulk. Inside of the pouch is a small stash pocket on the left side. It fits an ID, cards, or a key nicely. I found that my cell phone fits, although the weight of it jostling around meant the pocket was more ideal for lighter items. 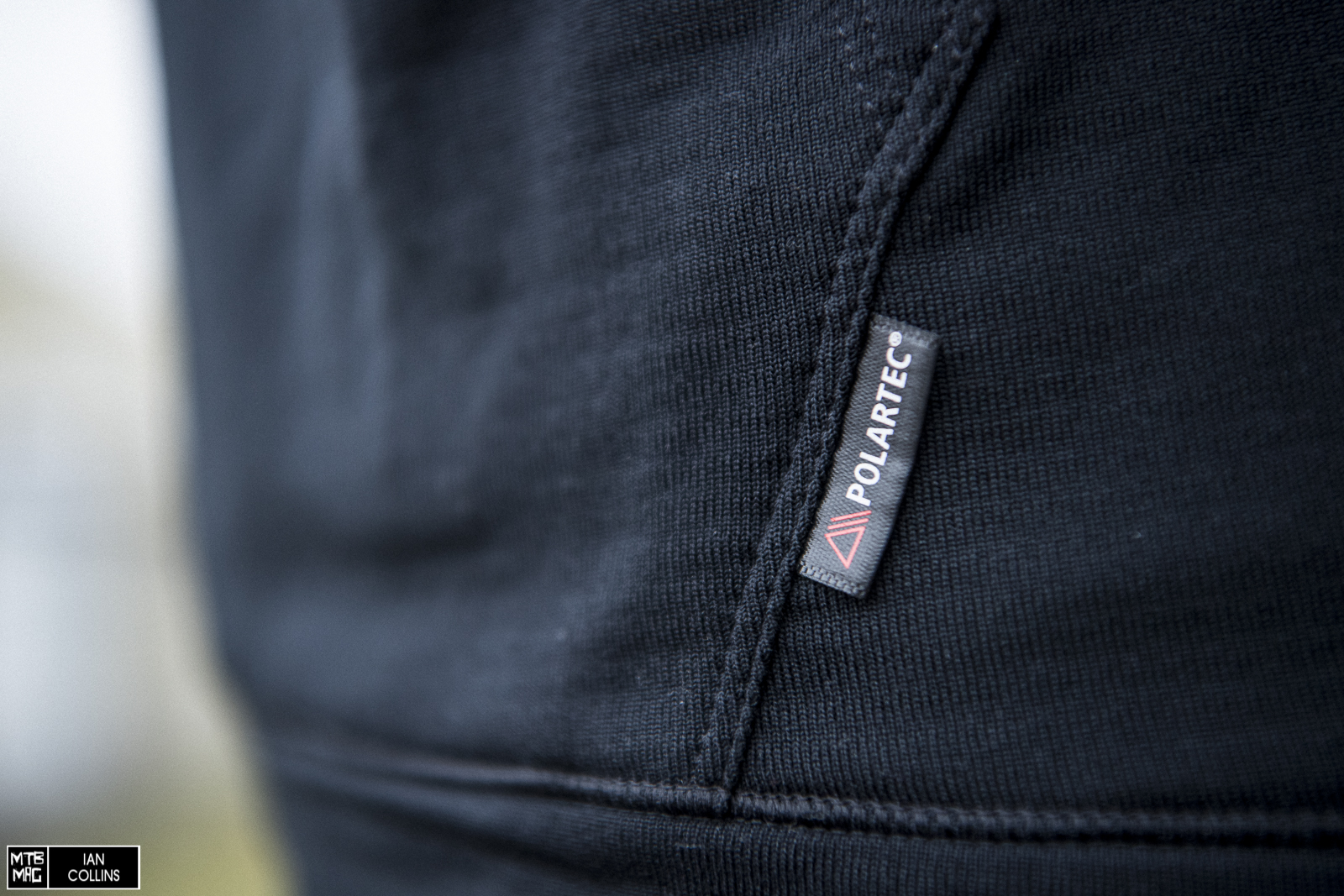 The material Specialized chose is Polartec Power Grid, which is a hydrophilic synthetic fabric whose main goal is wicking moisture, to help keep you not only dry, but warm. 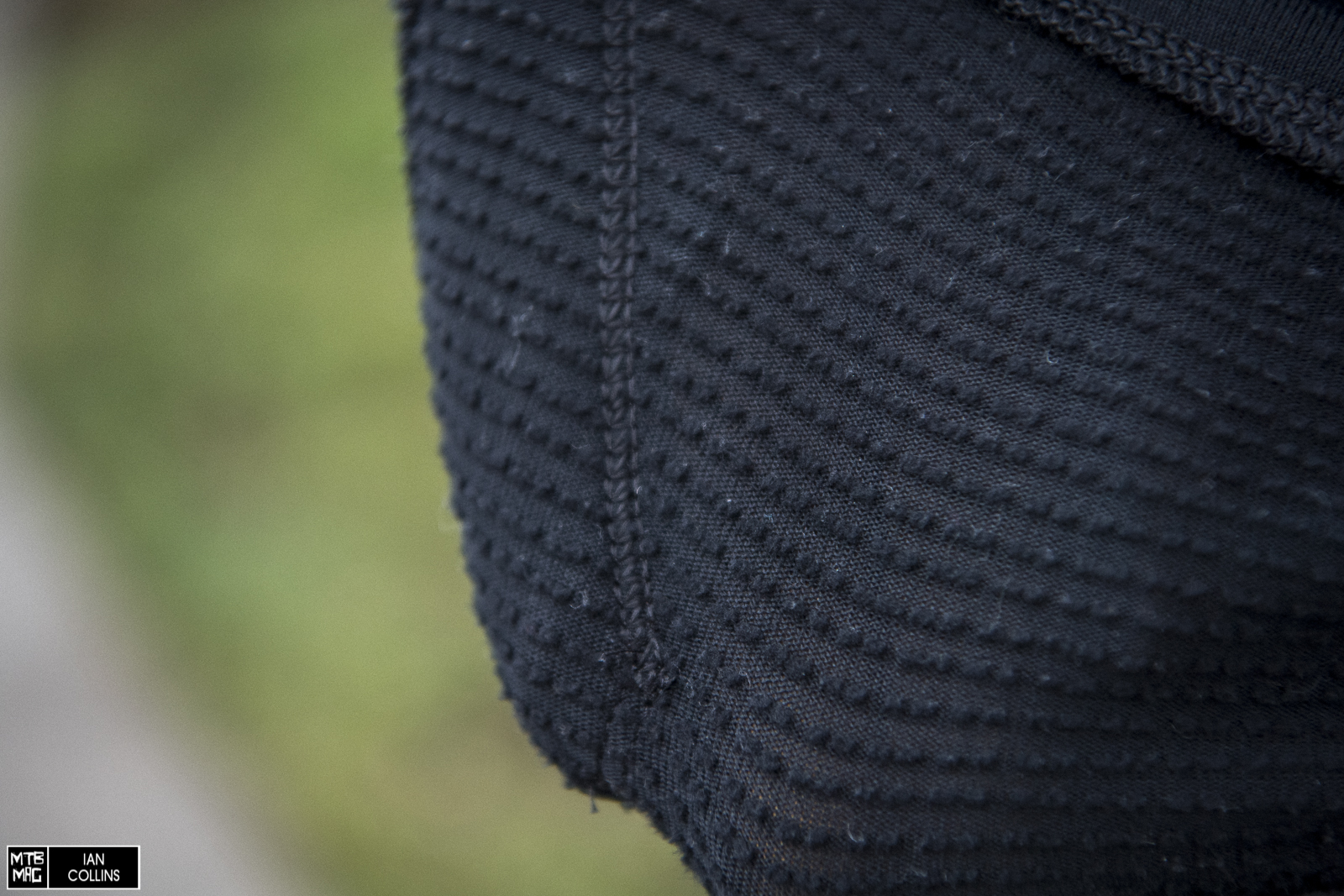 The inside surface consists of dots and ridges to create airflow and raise the surface off of your skin. This allows for sweat to evaporate more easily and helps prevent the jersey from sticking to you and feeling, well…gross. 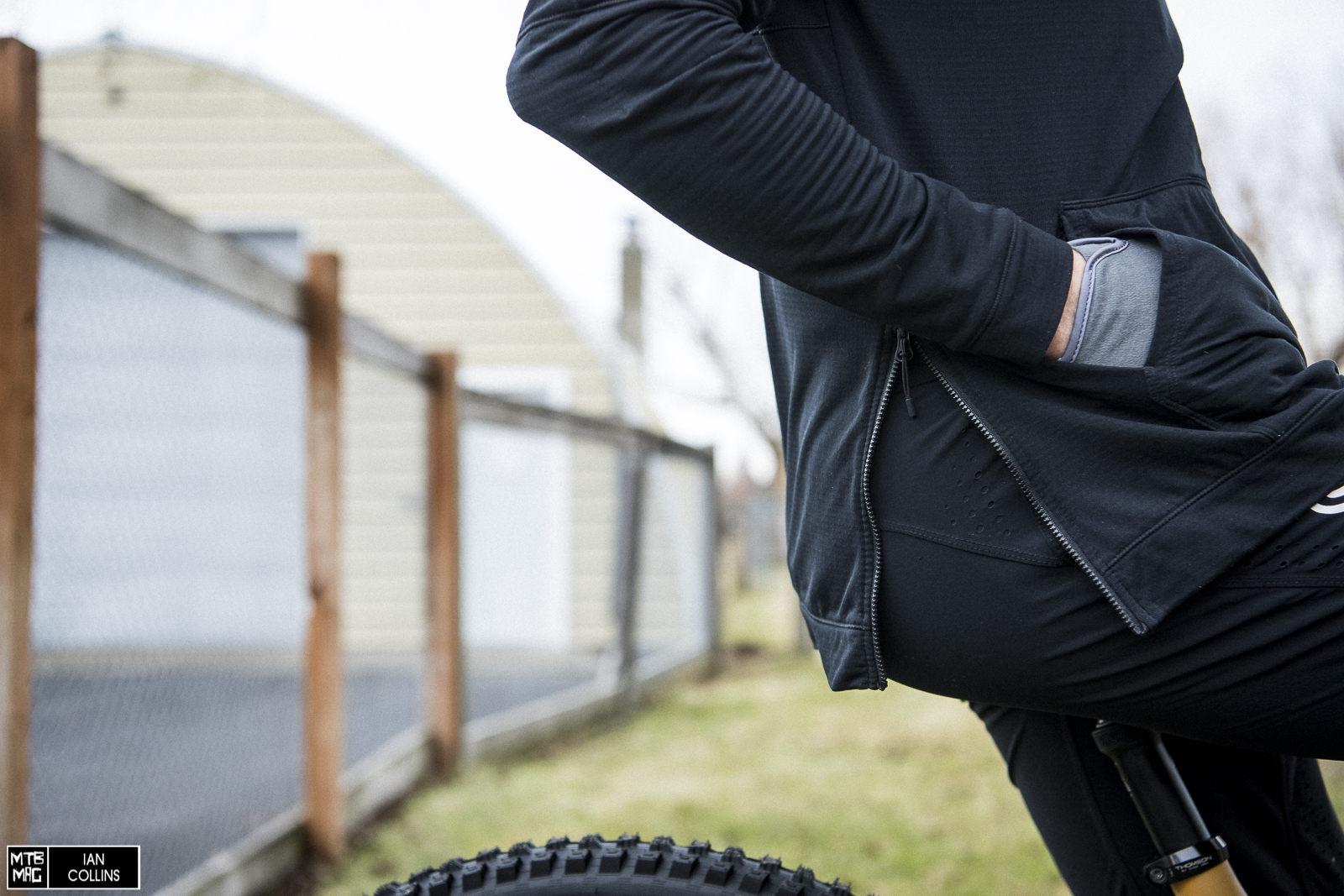 Like some of their other new winter outwear, there is a 1/3″ length slash on the right side running from the midriff to the waist. If you start to get warm this is an easy way to cool off without having to get off the bike. The seams are nicely reinforced throughout the jersey, particularly at the upper half, and especially around the elbow.

Starting with fit, at around 6 foot tall and 180 pounds, I found the size Large to fit absolutely spot on as it should. There weren’t any weird quirks either – all too often I try on clothes of all kinds where the the sleeves are too long/short, or the shoulders are too narrow, or the neck is too tight/loose, etc. This was not the case with this jersey, so getting all of the proportions right is a great start. I’ve been testing the Trail Series Thermal in weather ranging from the low teens to the 40’s (Fahrenheit), and mainly wearing a lightweight wind breaker or a heavier duty rain shell over it. Thus far, there have only been a couple of rides where I was warm enough that I felt compelled to stop and take the shell off. When that did happen, I usually was happy to also unzip the side vent, which functionally speaking was great all around. The fabric itself was soft and comfortable on the skin, which is a relief because some wicking materials can lean toward the itchier side, though that was not the case with this Polartec Power Grid stuff. The few times where I was hot enough that I felt the need to remove my shell, I was very surprised at how quickly the jersey dried out – it was typically a matter of minutes, even as I kept on hammering. As far as features go, most of that is covered under details, but I will add that the pouch made for a nice reprieve for cold hands more than a few times. It’s something I wouldn’t think to feature on a jersey, but alas we in the bike industry are fortunate that I’m not tasked with designing such things, so hats off to whoever thought of that. Anyhow, as far as durability on trail was concerned, this jersey has proven to be tough enough so far, although I’m not sure how it would survive crashes as I’ve not had any while wearing it. In terms of how it’s held up overall – I’ve washed it a couple dozen times and it has managed to shed body odor nicely without showing any signs of breakdown yet. All in all, for $150 this jersey is a bit pricey considering it’s made from synthetic materials, as opposed to Merino wool, but it has been vastly superior than simply wearing a run of the mill long sleeve jersey this winter. If your rides consist of cold temperatures requiring jackets, the Trail Series Thermal makes for a great base underneath.

Danny MacAskill: A Trip to the Seaside